Cameras come in all shapes and sizes, but the Canon EOS R3 shows just why pro-level cameras can charge a fortune, and why some of them are even worth it.

A big camera with an equally big feature set, the EOS R3 isn’t made for your everyday anyone.

Specifically focused on the pros, it’s a big camera with a whopping 1015 gram weight without the lens, and a heap of features to boot. And when we saw “pros’, we’re not focused on your uncle who thinks his iPhone makes him a pro-photographer; rather, we’re thinking of folks who sit behind great big whoppers of a lens at sporting events, weddings, or bird watching.

Simply put, it’s a large camera with two grips — horizontal and vertical — and a lot of tech and capability under the hood. There’s a magnesium alloy frame, a rubberised body, and a design that feels durable and well built. 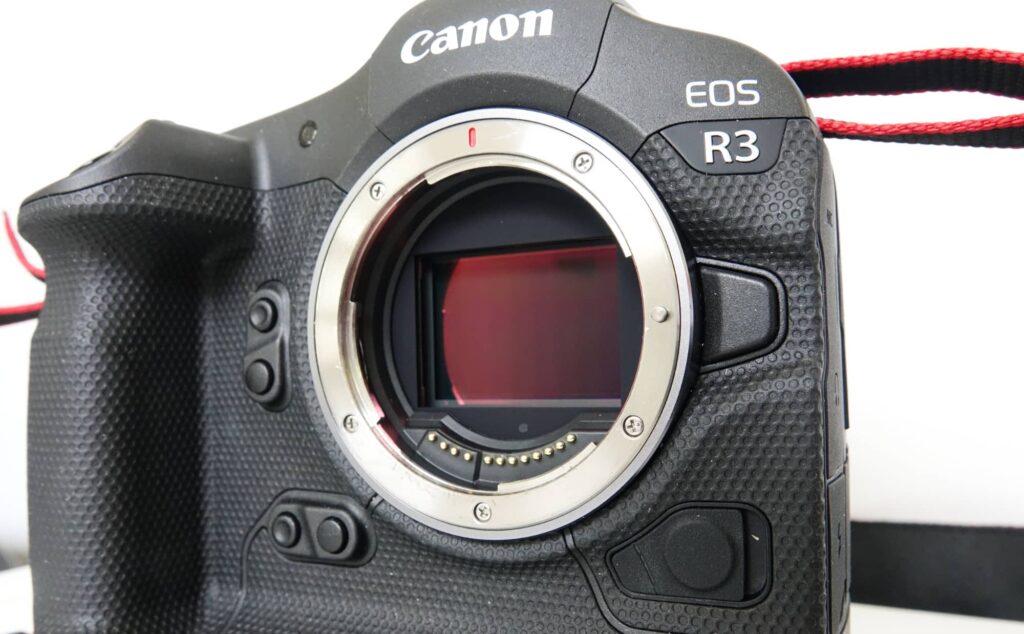 Inside, the capability starts with the sensor, which is a full-frame CMOS sensor sporting a 24.1 megapixel resolution in the traditional 3:2 35mm image ratio, the whole thing handled by Canon’s DIGIC X image processor, while also including support for image stabilisation built into the body, providing up to eight stops of shake when used with the right lenses.

There’s an impressive autofocus setup delivering lots of options including point-based autofocus and a version that tracks using your eye, not to mention a touchscreen incorporated in the design to let you touch the part of the image you want to hold focus lock on.

The touchscreen serves as way to control the focus and shots, but also view what you’re capturing, and it’s a surprisingly big 3.2 inch vari-angle screen that can pull out at various angles. Alongside that method of control, there’s a jog wheel, directional pad, several dials, and plenty of buttons, plus a 5.76 megapixel viewfinder at the eye, making for a camera that offers plenty of ways to control and use it.

You’ll also find a massive assortment of connectivity options in the EOS R3, with WiFi 5 802.11ac, Bluetooth 5, USB C, wired ethernet, and GPS built in, with the ability to talk to an app on iPhone, iPad, and Android. There are two card slots here, a mechanism lock-up that sits over the sensor, and camera buffs will find support for HDMI, 3.5mm headphone, the hot shoe, but no flash. That’s one of those things that like the lens — which isn’t included — you’ll need to pay extra for. 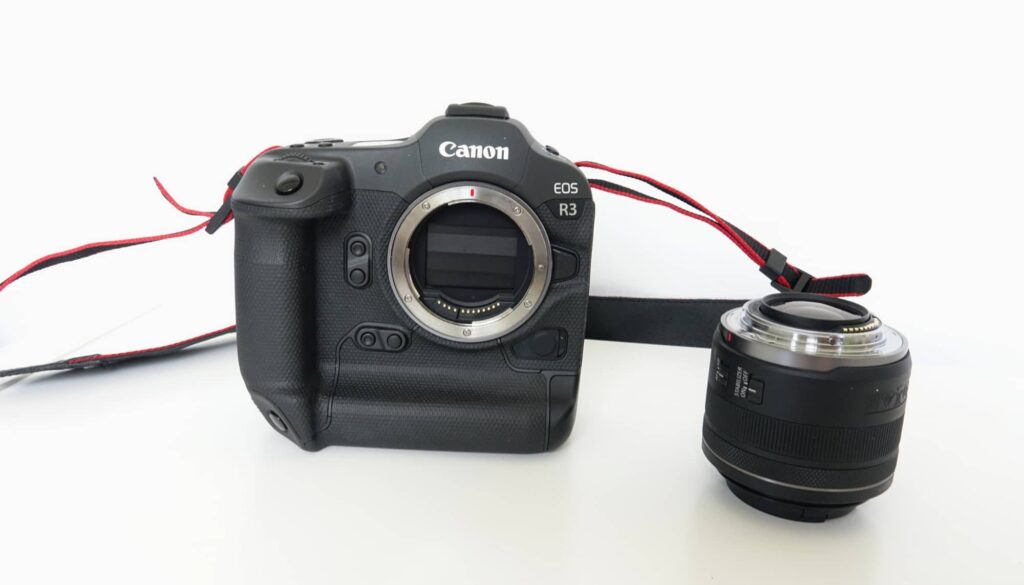 While it’s a little bigger than your standard mirror-less camera, the Canon R3 is one camera that doesn’t let its size impact how you use it. And if you’ve learned how to hold a camera before, be it on a big or a small body, you can transfer that knowledge right over to this one easy peasy.

Thanks to that larger style 35mm design, there’s a pro grip on each side, making this camera look more like a square than the typical rectangle, and providing the same hand-hold style regardless of whether you’re holding it in portrait or landscape, a convenient solution for photographers, for sure.

Regardless of where you hold it, there are plenty of controls. There’s the back wheel, a dial at the top, a dial near the forefinger, a small directional pad, and all without mentioning plenty of buttons and a touchscreen, and then some of the extra things you might not be thinking about. 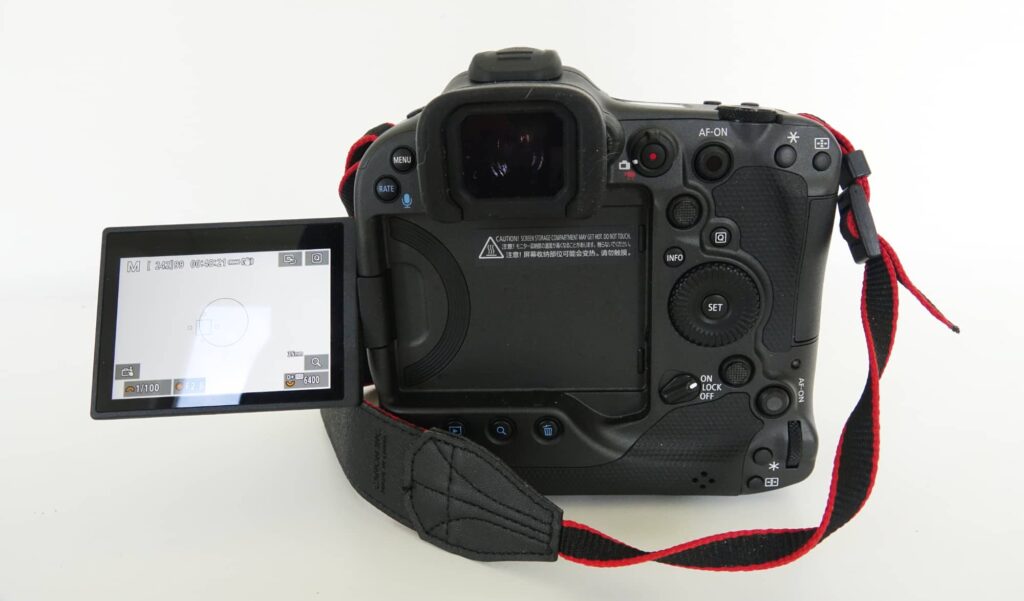 One of the buttons, the Q button, will bring up a quick way to change features (guess what the “Q” means), and that includes support for eye-based autofocus, a concept that monitors what your eye is doing to focus on the subject.

It’s a curious concept, and one we’re sure we’ve seen Canon dabble with in previous film cameras, including the EOS 7s which included an eye-control focus system. Some 16 years later, Canon is trying it again, though it’s a little hit and miss.

Glance in the short space of the viewfinder and Canon’s Eye Control AF can monitor where your eye goes, giving you some semblance of autofocus tracking for what you see.

As cool as it is, it’s not super reliable, and we found ourselves needing to fix it by switching Eye AF off and going back to the old school method of focusing, or “old school” enough by selecting focus points using the wheels, directional pad, or touchscreen. It’s just far more reliable. 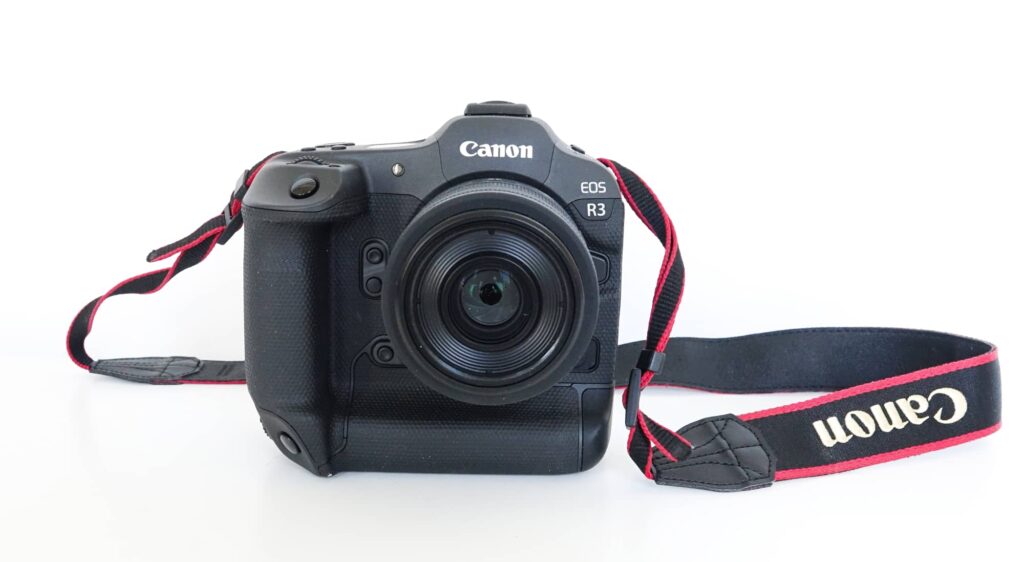 That reliability extends to the image performance, which is just bang on superb. This is a chef’s kiss of a camera and can do no wrong.

While the 24 megapixel maximum resolution of the R3’s full-frame sensor isn’t the best in the business, the results you can capture with the camera are nothing short of amazing, offering 6000×4000 pixels in the full 24 megapixel for RAW, while also able to capture HEIF and JPEG if you choose to.

Images captured during our review were excellent, whether it was in daylight or when the lights dropped low, offering plenty of detail.

In low light, you may find yourself creeping the sensitivity comfortably to the high end of the range, because 25600 and 51200 are more usable than we expected, and even 102400 has been quite solid, as well. You can even max out a 204800 if you need to.

There’s pixelation masquerading as grain, for sure — it’s an extreme sensitivity, we’d expect that — but you can still work with it. Gone are the days when 1600 an 6400 were “high”, because you can more than work with these.

But the details are there and the images are strong, whether you’re capturing at a slow one to three frames per second, or flipping the high-speed mode in for 12 shots per second on the mechanical shutter and up to 30 on the electronic one. Yikes. 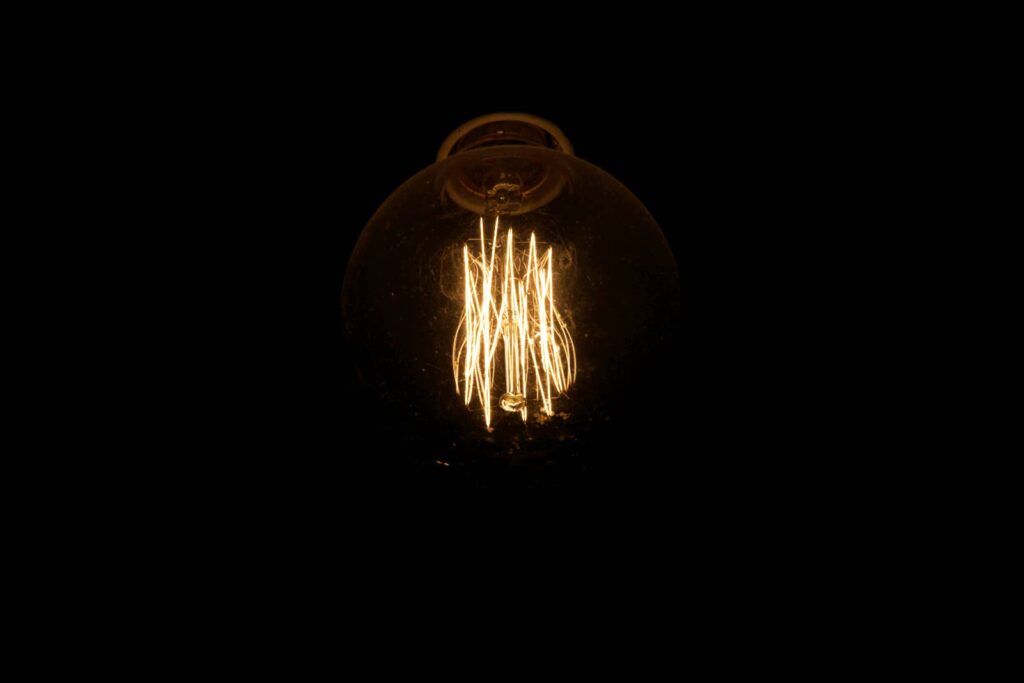 There’s also the area of video, and while the Canon R3 skips out on the 8K video capability of its sibling in the R5, the included support for RAW video at 6K is still nothing to sneeze at, and handy, to boot.

We don’t need to capture at 6K, let alone edit in RAW at 6K, but the support is there, while 4K and Full HD make up the rest of the options, which is plenty varied for the next few years, we think.

As it is, the 24 megapixel amount of the R3 would prevent that 8K format, so you couldn’t get it if you tried. But frankly, you probably don’t need it in this solid image maker, which is fast and impressive, and bundles in some great video needs if you have the skills to match. 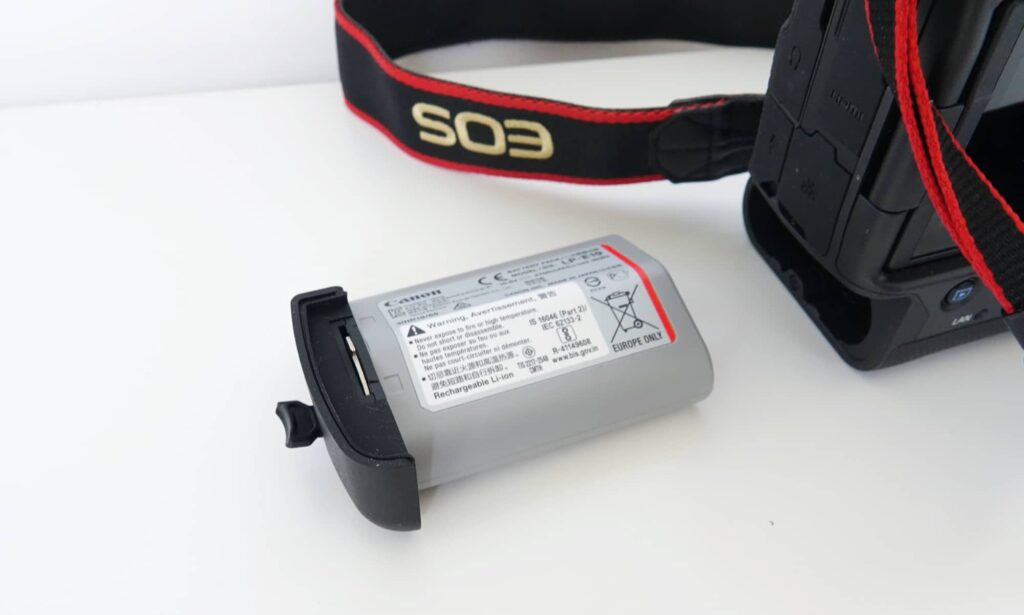 Depending on what you capture, that can make an impact on your battery life, with the massive battery under the Canon EOS R3, you’ll hit anywhere between 500 and 800 shots, though it can differ if you switch into video mode.

During our EOS R3 review, we spent so much time capturing shots that we didn’t notice we weren’t charging the camera, and it’ll basically just keep you capturing all the same.

Interestingly, the Canon R3 is supposed to support USB Type C charging, but we didn’t find it was always reliable. More on that shortly.

Value, however, is one area that will be difficult to justify unless you happen to be a professional photographer, and there’s a bit of a warning sign in its design.

Simply put, this is a large bodied 35mm camera, and those are almost always geared at pro photographers, thanks in part to the larger design, bigger battery, and a built-in vertical grip that allows a pro photographer to hold the camera both in landscape and portrait with the same grip in each. 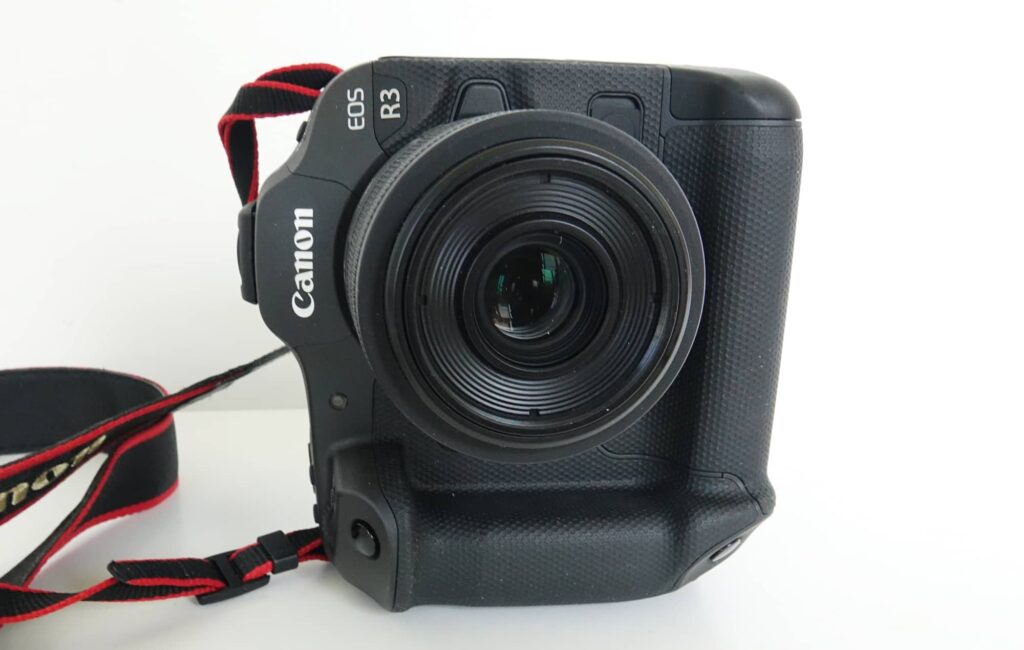 Larger 35mm cameras have more often than not been designed specifically for the professional photographers, and they’re not always concerned about value more than what they can deliver. That’s never really changed, and may not need to.

The Canon EOS R3 is built to take pictures and lots of them, and it’s built to survive. The fact that it carries a rough $8599 price body only in Australia may not read like it has value, but professional photographers aren’t really thinking about that, either.

They’re likely factoring in durability and capability, and while the nearly $9K price for the EOS R3 is hefty in Australia, it’s not one where “value” is really even considered (especially if those photographers are making money from the use of their camera). 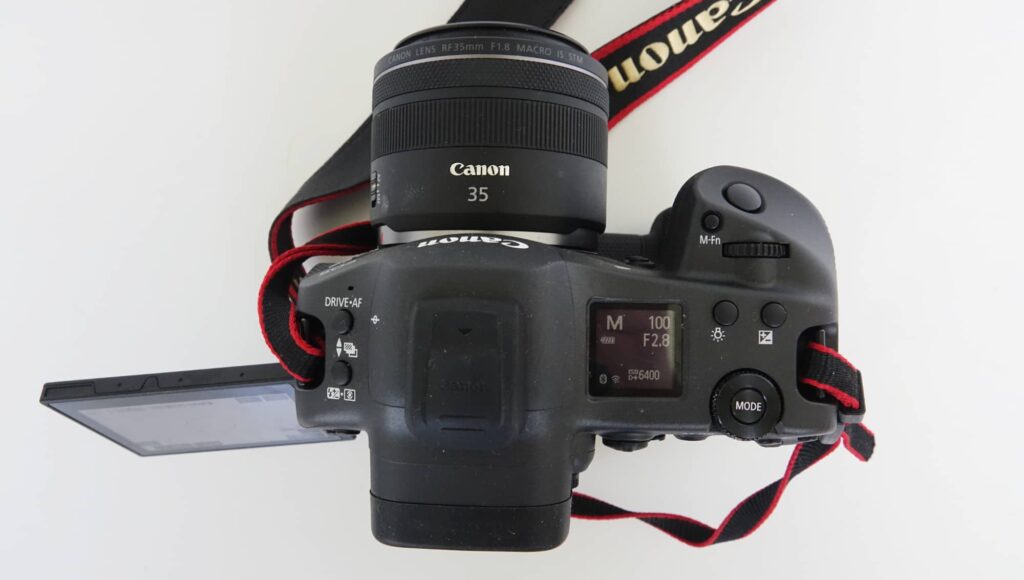 While we can accommodate the high cost of the Canon R3 due to the camera’s nature, some of the bugs and quirks are a little less easy to account for, such as the eye-based autofocus, which is a neat inclusion, but one that still doesn’t work tremendously.

Yes, it’s an old concept Canon has been bringing back to life, but it’s one that doesn’t really feel like the company has exactly nailed.

Several years on from when eye-based autofocus was a feature in film cameras, it’s hard to view the tech as remotely reliable, and there were times where we struggled to get the R3 to hold onto its lock, almost as if the camera had an attention disorder. Far from prescribing medication to a mirrorless camera, it was just easier to turn Eye AF off, and use other methods of autofocus.

Also finicky is the USB charging, which is technically supported over high-power USB Type C plug and packs, but doesn’t always work. We got it working once and then not so another time, suggesting perhaps that the power amount wasn’t right every time, but also something you mightn’t know about when you go to plug it in.

To Canon’s credit, the pro-style body of the EOS R3 typically relies on an external battery charger that you can load batteries into. Great. But in an age where nearly everything can be powered over Type C USB — even portable air cleaners — we’d like to have seen a more reliable Type C connector if we could have. 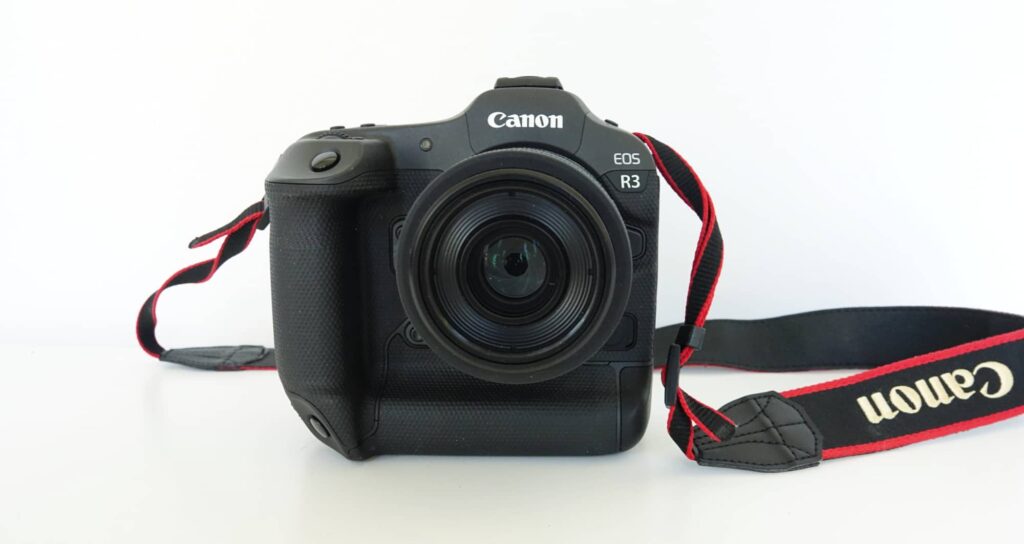 Price and odd niggle aside, the Canon R3 is a delight, albeit an expensive pro-focused delight. This is the camera for professional photographers, and enthusiasts keen to take a step into the world of professional image making.

Built like a tank with a system spec to match, the Canon EOS R3 isn’t your regular camera, and that’s A-OK. It’s better than that. It comes packing the features and familiarity and freakishly first-rate photography feeling, you may not be able to go back.

And yes, the R3 is an expensive bit of kit — every full-size camera is, we assure you — but if you need to have one of the best cameras in your arsenal, this is definitely one to consider. Without doubt, the combination of features and capability make the EOS R3 a camera for the ages. Recommended. 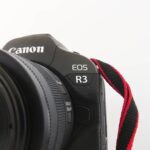