A sizeable laptop from Asus wows with its screen and impresses with other features, too. Is the Vivobook Pro 16X OLED worth considering?

Fancy a big laptop that doesn’t weigh down the arms too much, and yet still packs in the features? The Asus Vivobook Pro OLED 16 could deliver on what you need, especially if what you need is a beautiful OLED screen.

The 17 inch laptop might have once been the biggest laptop to consider, but it’s not the only big laptop worth checking out. A little smaller and marginally more focused on portability, the 16 inch computer is the new middle ground, ideal for folks who want a little more room than the 15 inch, but the same sort of power as the 17.

And that’s precisely what the Asus Vivobook Pro 16X OLED is focused on, offering a 16 inch screen with a slightly larger body size, able to pack in the sort of guts gamers and workstation folks need. Is it your next computer to take with you? 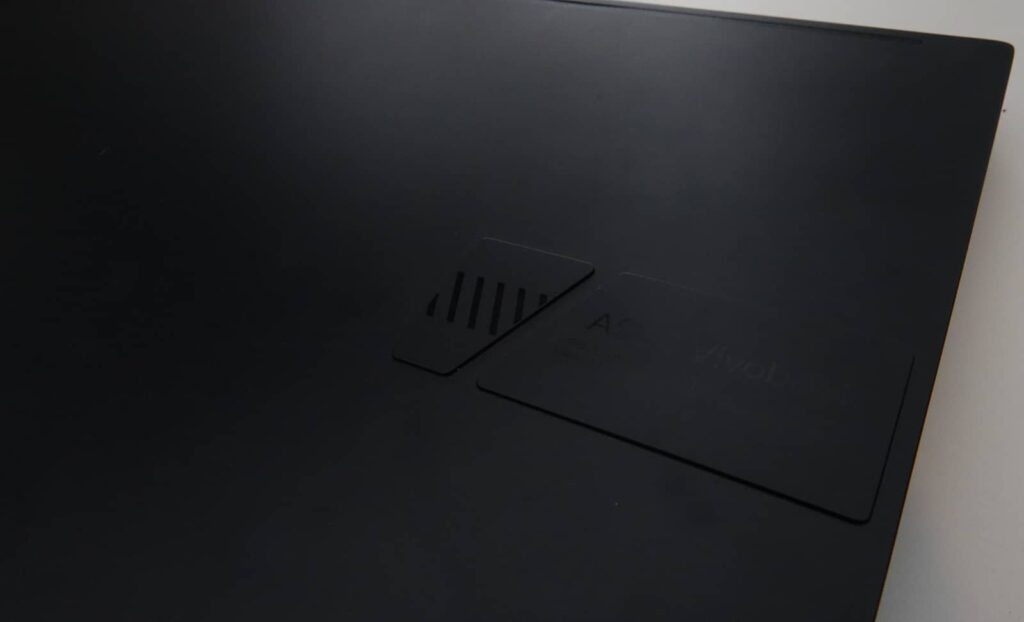 Set in black and arriving with a badge unlike any other, almost appearing like branding made by the military or some swanky new club, the Asus VivoBook Pro OLED 16 isn’t your typical silver or beige box. It’s slick and minimalist, decked in dark until you open it up.

Open that massive 16 inch display up and while you won’t find a 360 degree hinge waiting for you, the look inside does read like someone in a special division of the military worked on your laptop.

A red Escape key, safety stripes on the Enter, and obvious colour and shade differences between the numbers and letters and the functional keys; this isn’t your typical laptop, and Asus wants you to know simply by looking at it. 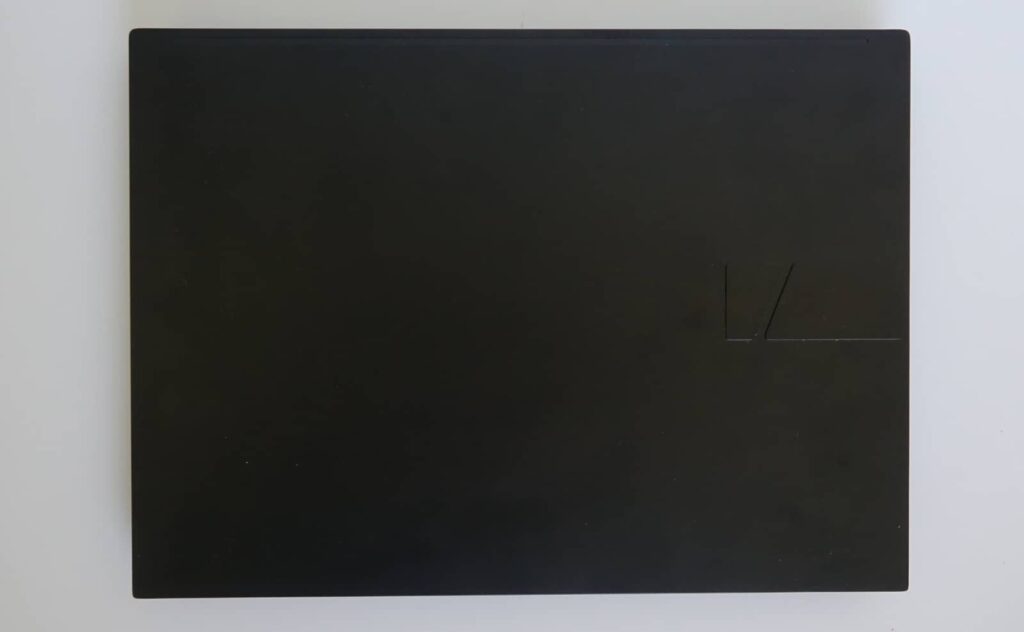 Underneath, it’s also not your typical laptop, carrying a reasonable amount of tech under the hood.

The Vivobook Pro 16X OLED comes with a choice of AMD Ryzen chips, but our model opted for the Ryzen 9 5900HX 8-core chip, complete with AMD Radeon graphics from the chip and accompanying a discrete graphics chip from Nvidia, the GeForce RTX 3050 Ti with 4GB RAM. 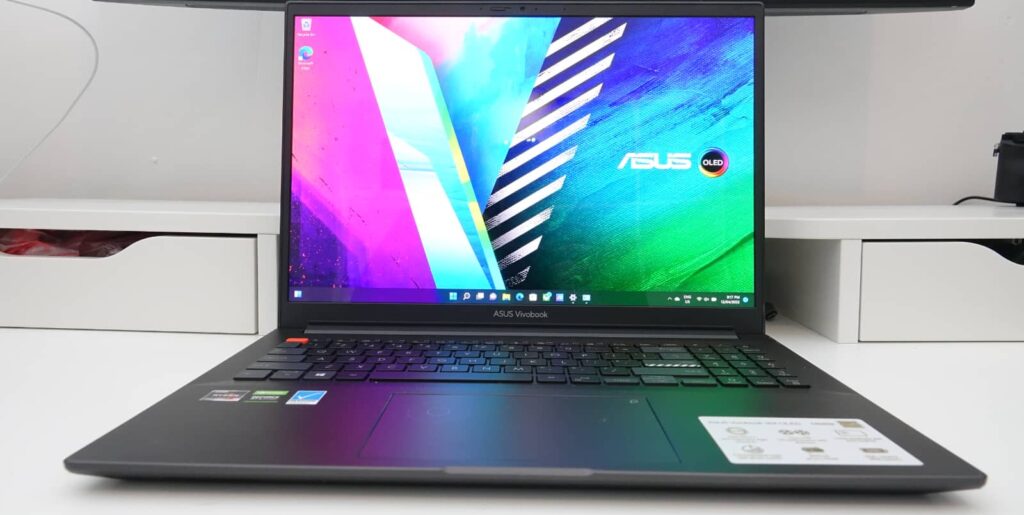 The screen is one of the key features, with a 16 inch 3840×2400 4K display running OLED technology. That’s the same Organic Light Emitting Diode technology you find on TVs, but except here on a monitor, something Dell has in an XPS 15 OLED model, but few other manufacturers seem to dabble with. The Asus 16 inch OLED panel is even Pantone validated, thinking of the designers of the world, it seems.

Almost everything else is the same across the models, with a 720p HD camera with privacy shutter at the top of the screen, sound by Harman/Kardon, WiFi 802.11a/b/g/n/ac/ax WiFi 6, Bluetooth 5, and a combination of ports, including a three Type A USB ports, an HDMI port, a microSD card reader, 3.5mm headset jack, and a singular USB Type C port, plus a circular power port.

The whole thing weighs a shade under two kilos (1.95kg) and is powered by a 120W adaptor. 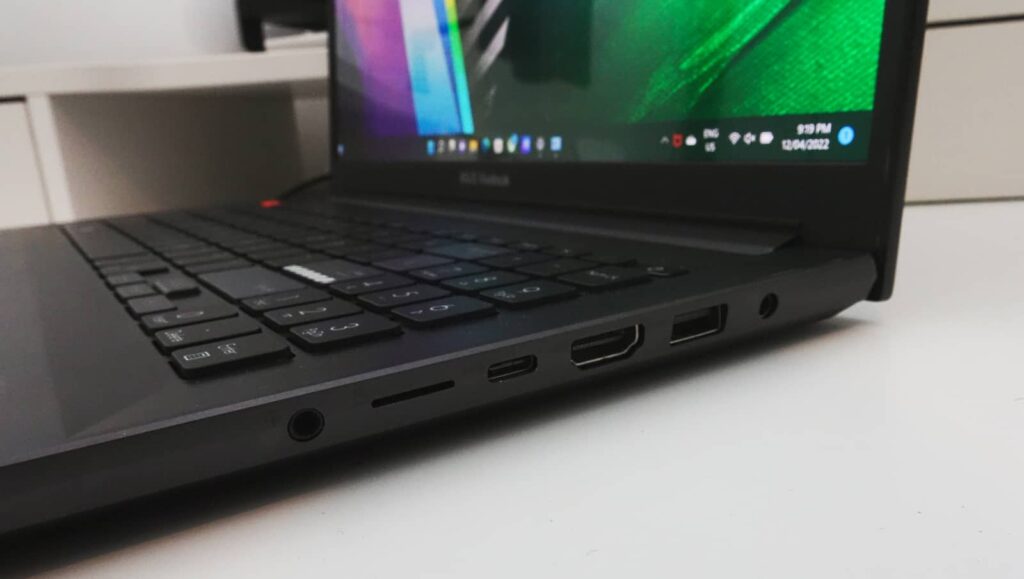 With the features out of the way, it’s time to get stuck into the computer, and we’ll start with what is easily one of the more impressive features: the 16 inch 4K OLED display.

And we’ll just say what needs to be said, because the screen is practically spectacular.

Bright, vivid, and razor sharp, the 16 inch OLED display is clearly the star of the Vivobook Pro 16X OLED, even included right there in the model name. 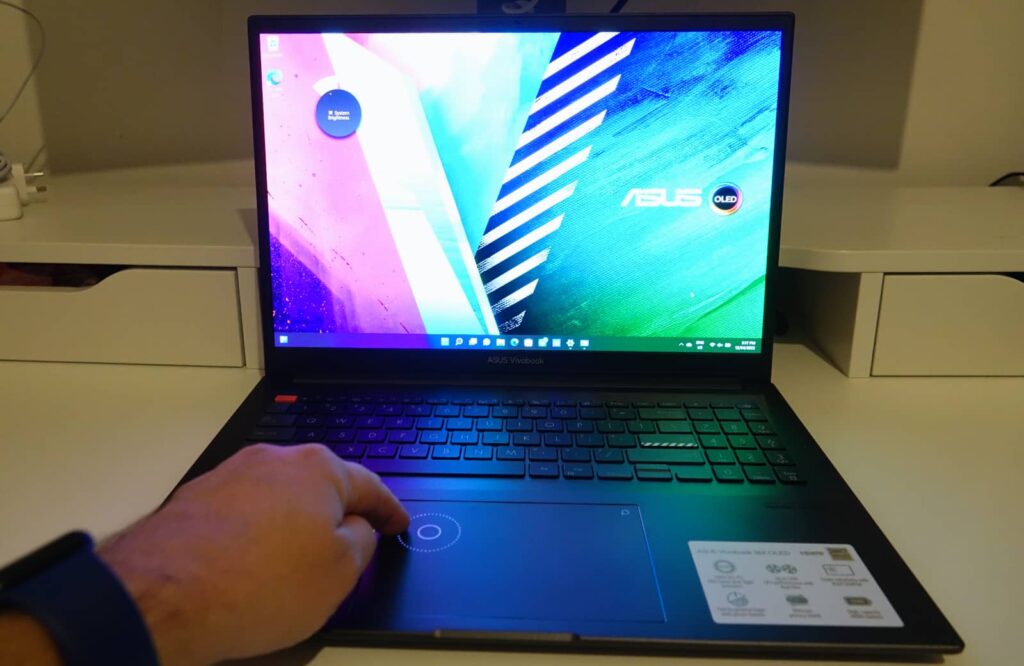 Matching that sizeable 16 inch screen is a large keyboard, complete with a decent trackpad beneath.

Thanks to the extra large body accomodating the 16 inch screen, Asus has managed to throw in a full-size keyboard, which is comfortable to use, and a trackpad that isn’t the best we’ve found. There’s no touchscreen here — a bit of a shame, though not a total surprise — though Asus has provided something a little extra, if you can call it that.

Built into the trackpad is a feature you can turn on and off called “DialPad”, which basically switches on an extra spot of sensitivity in the corner of the trackpad, allowing you to dial in other features almost as if you had a control knob for your laptop.

The theory is you might use DialPad to turn up or down the volume with a more tactile feeling while you’re in the middle of something, like a game, or that it might be mapped to another feature, such as brightness control or microphone levels, and so on and so on. It’s just that little bit extra before you get stuck into using the laptop. 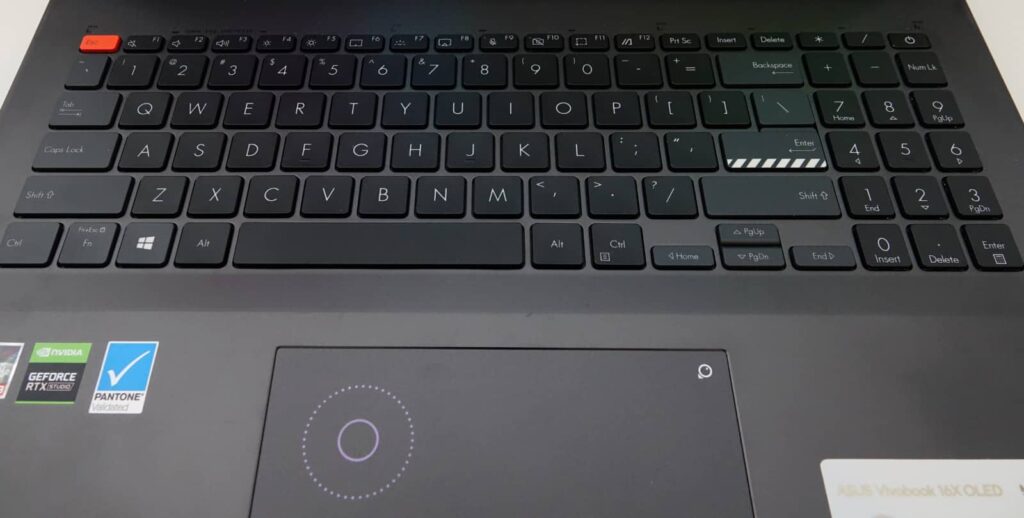 Armed with AMD’s Ryzen 9 5900HX, there’s a heap of performance to offer on the Vivobook Pro 16X OLED, making it a machine for both games and content creation, and feeling suited for both. Technically, there are two sets of graphics onboard, with AMD graphics included in the Ryzen chip, plus a discrete GPU in the form of the Nvidia GeForce RTX 3050 with 4GB RAM.

It’s a solid setup that delivers on benchmarks, outpacing some of the competition from Dell, and providing enough spec and prowess for more than a few chores, offering productivity through that big keyboard, but also the choice of tech.

For instance, workstation folk might be keen to know that the combination of the AMD graphics and GeForce graphics gives them a choice of what they use in their apps, handling Unreal Engine nicely, and other graphic heavy apps.

Meanwhile, gamers will likely want to take advantage of that Geforce RTX 3050, which delivers on gaming performance mostly at Full HD, though you may find the odd title that handles the 4K screen of the 16X OLED acceptably well, too.

Forza Horizon 4 managed 60 frames per second easily, with 76 being the minimum on GPU before maxing out at 90FPS on Full HD. Max that out at the 4K capable resolution of the monitor and you'll find 42FPS is the max.

It means Full HD gaming is more the go on this 4K screen, which is fine, though in fairness, 4K gaming is something desktops might struggle with, as well.

We're just happy to see the system handle itself well, which given the combination of fast chip, two graphics choices, and a staggering 32GB RAM isn't a total surprise, but impressive enough all the same.

Surprisingly with this assortment of high-powered hardware, Asus manages a good 6 to 10 hours of life, though it'll depend on what you do. Push the graphics and screen and you'll sit on the lower side, but it's not bad here at all.

Asus even feels like it has managed to hit quite a decent value in the VivoBook Pro 16X OLED, thanks in part to what feels like a modest balance of bits and pieces.

For instance, for the VivoBook Pro 16X OLED review we undertook, the model in question was valued at $3099, which seems quite doable given the tech inside. There's a meaty graphics card, a solid 32GB RAM, and a big 16 inch OLED display, the latter of these being two features few laptops typically see.

Laptops from Asus typically come in a few different SKUs, and so there's a pretty solid chance you'll find the Asus Vivobook 16X with varied specs. Clearly, this review is focused on a fairly high end model.

That being said, given the solid tech inside -- like that great screen -- the value seems fairly on point.

While you get a great screen you won't want to take your eyes off, you will want to replace the mediocre sound with better speakers or a pair of great headphones. We can suggest a few for that last thing, but you'll want to do it ASAP, because while the industry legends of Harman/Kardon tweaked the sound in the Vivobook Pro 16X OLED, the result makes you wonder if they phoned it in: weak, shallow speakers with minimal bass.

Playing the aforementioned Forza Horizon 4 revealed minimal grunt from the engine and a general feeling of soft music and tinny engine sounds. We know that game better than this laptop lets on, and that is most certainly not what Microsoft has left in here for people to enjoy. That's on these speakers, because they just aren't great. 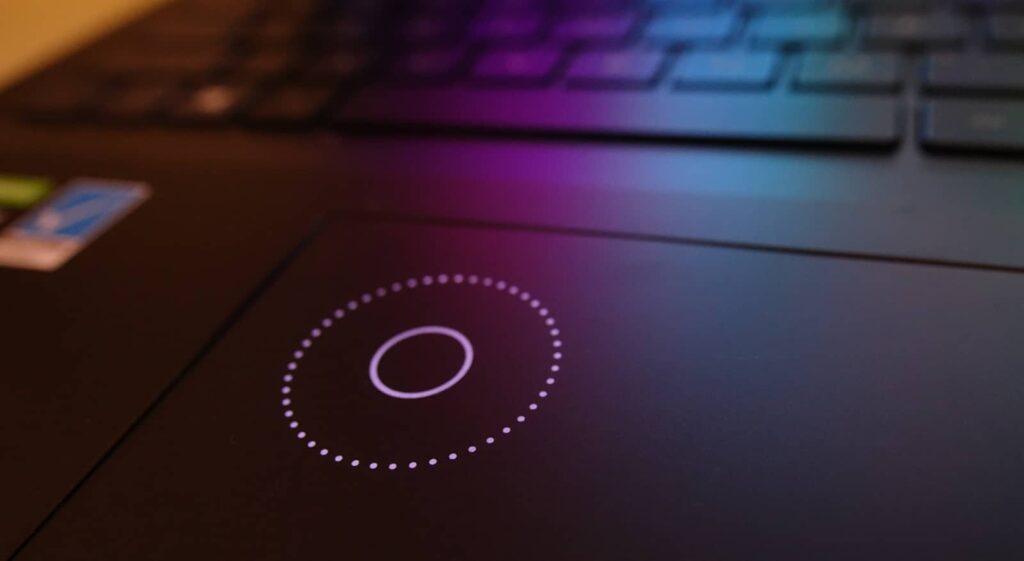 Alongside meh speakers is a meh trackpad that feels like it could be better, and comes with a totally useless feature: a way to control system features like brightness and sound using the trackpad equivalent of a rotary wheel. Called the "Asus DialPad", it's a swipe down on the touchpad that triggers some LEDs and a function to trigger an on-screen virtual knob to control brightness and volume... and that's it.

It's worth noting you have these functions on the F-keys of the Vivobook Pro 16X OLED's keyboard, so it's entirely unnecessary to have yet another variant here, but here it is. We didn't find an easy way to tweak that, making us wonder just what the point was, though it's app-connected, so you it's kind of up to you to find the apps it'll play with.

Asus says you can use the DialPad for other features, but we couldn't find a whole lot of use. Frankly, this could be like Apple's Touch Bar, whereby it's an interesting addition to the keyboard that virtually no one else tries to add functionality for. 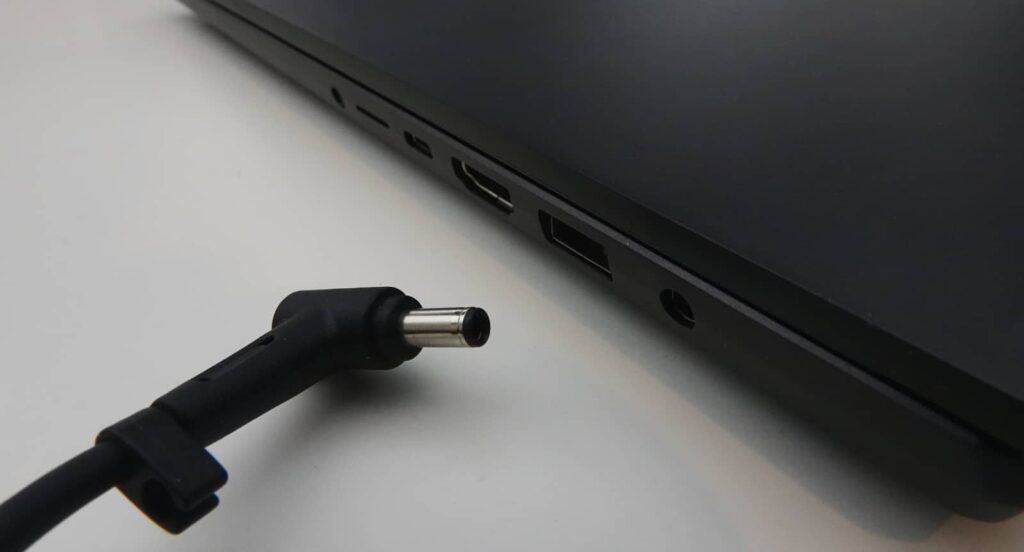 You also can't use that beautiful screen as a touchscreen, though you may not care. It's one of those points worth mentioning, alongside the lack of a USB Type C charge port. You still get one, you just can't charge the Vivobook Pro 16X OLED on it at all.

It might be the first laptop in years that we've seen where Type C isn't supported for charging, with Asus bucking the trend of the universal charge standard. Crazy. It's also surprising Asus opted for only one Type C connector on the entire laptop, going instead for the older rectangular Type A in abundance. We guess it's a big power pack or nothing, and so it is. 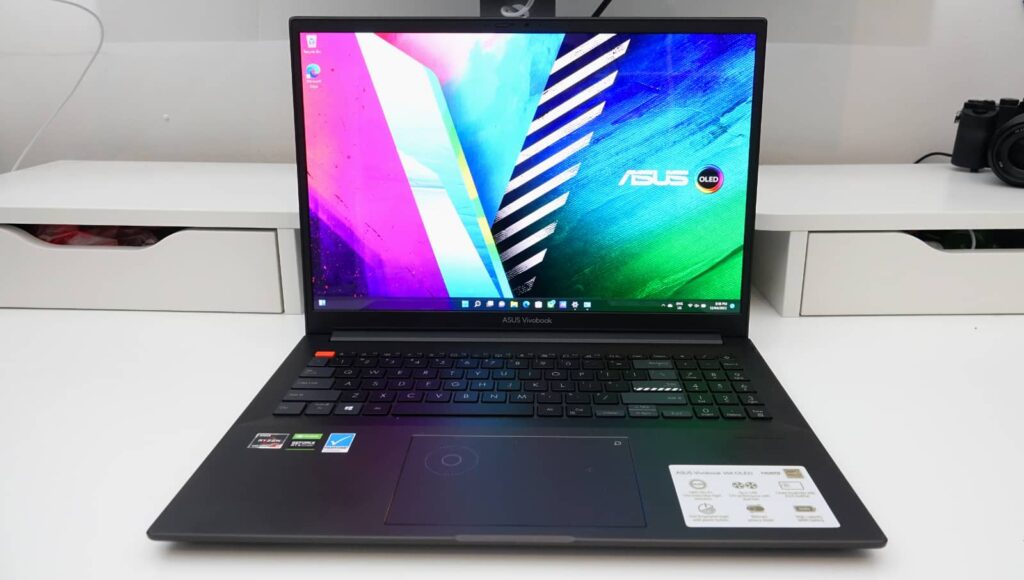 If you can get around the weird pushback to older USB ports and don't mind carrying a large battery brick, there's something to really like in the Vivobook Pro 16X OLED, especially if you sit on the fence for what you use your laptop.

There are things that need work: while the hardware in the Asus VivoBook Pro 16X OLED is all new, the port selection feels like a nod to laptops five years ago, and the speakers are surprisingly weak for an otherwise lovely package. It's weird to see the name "Harman/Kardon" on the VivoBook 16X OLED, because these speakers do not live up to that excellent name.

Get around the niggles and you'll find an impressive enough system made to let you take performance on the go. It's impressive for the price, and ideal for people who use their PCs for more than one thing. 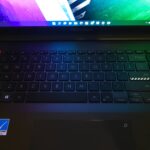