A new generation of Apple’s MacBook Pro is here, and it’s packing a new chip, too. Is the M2 MacBook Pro 13 a Mac worthy of your wallet, or is something else better?

Apple’s latest MacBook Pro 13 looks a whole lot like the last one, 2020’s MacBook Pro 13, and feature-wise, it’s pretty spot on, as well.

There’s a 13.3 inch 2560×1600 display up top with Apple’s white balancing True Tone room colour calibration tech, sitting atop hardware delivering Apple’s latest chip, the M2 Apple Silicon. It’s paired with at least 8GB RAM and at least 256GB storage, though you can flex both if you need, the former up to 24GB and the latter to 2TB.

Apple also offers up two Type C Thunderbolt 3 ports on the left edge with support for USB 4 and DisplayPort, plus charging on either port, while a 3.5mm headset jack sits on the right. That’ll be your spread of wired ports, while the wireless is covered by Bluetooth 5 and 802.11a/b/g/n/ac/ax WiFi 6.

A 720p FaceTime HD camera sits in the frame, with stereo speakers in the body, plus support for Spatial Audio on the speakers and for head-tracking with Apple’s recent headphones. Oh, and a three-mic array to keep your Zoom chats sounding great.

That’s basically it, though, arriving in a 1.38 kilogram aluminium body which looks exactly like the previous model. Beyond the new chip, it basically is. 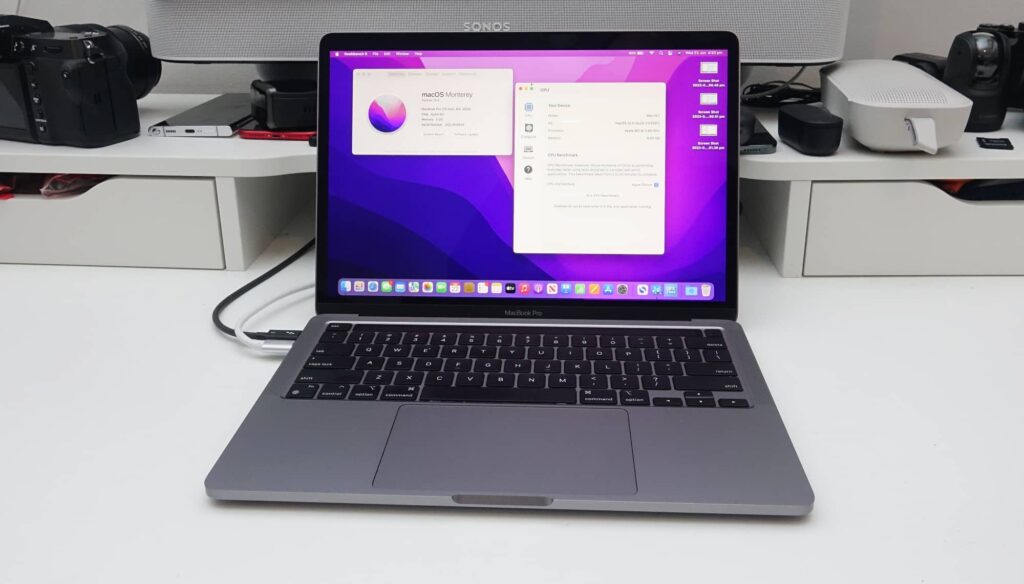 One of the things that clearly hasn’t changed is the screen, offering you a 13.3 inch 2560×1600 display that’s easy on the eyes, but still offers the noticeable bezels left over from last time.

That should come as little surprise, because the M2 MBP 13 screen is the same as what was in the M1 MBP 13. It’s not bad, just the same thing, and it’s not the only thing left over in this model. 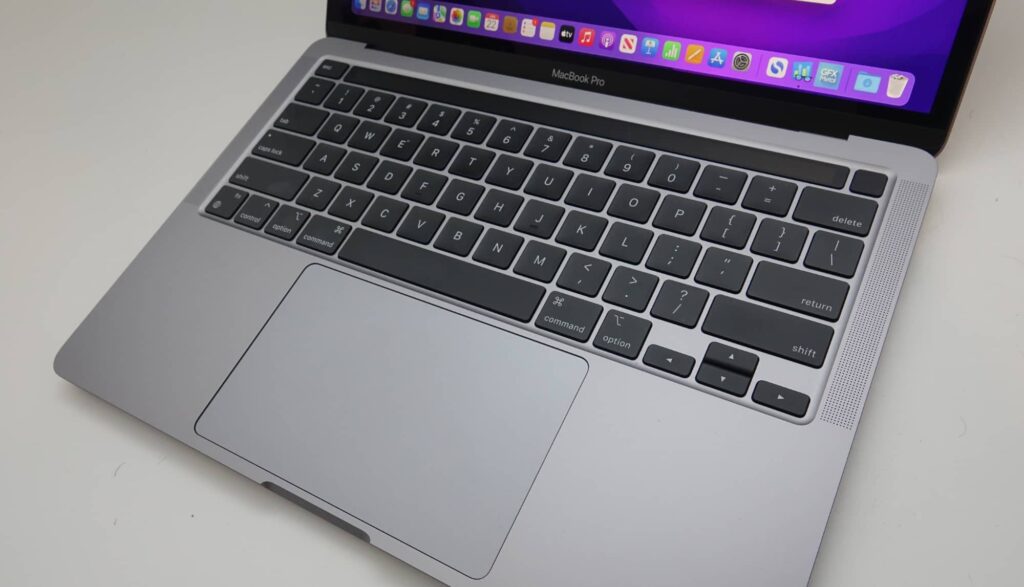 The keyboard and mouse also fall in the category of “if it ain’t broke, don’t fix”, with the same great keyboard, same great trackpad, and the OLED Touch Bar Apple has since retired.

You can’t find the Touch Bar in most of the current MacBook Pro line-up, so if you rely on scrubbing your finger from left to right on an arguably unused piece of hardware (most software doesn’t do anything with it, we’ve found), this is the last model to give you this piece of tech.

However, it means you’ll still get something you might use, alongside a great keyboard and mouse, plus the fingerprint sensor, which is still here, too. 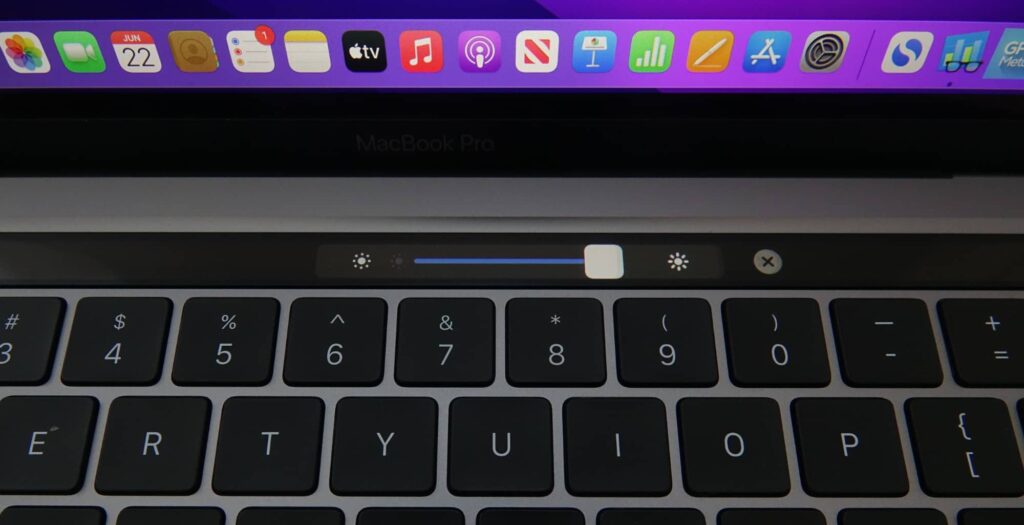 The major change for the 2022 MacBook Pro 13 is actually under the hood. One might say it’s really the only change the computer has: a shift from the excellent Apple Silicon M1 to the newer M2 variant.

A little bigger and slightly more powerful, the M2 is Apple’s latest and greatest, but not quite as seriously strong as the M1 Pro, M1 Max, and M1 Ultra. Similar, but different, as the case might be.

In synthetic benchmark tests, the M2 beats the M1 in most areas, hardly a surprise given the tech is brand new, though it doesn’t always stack up to the more impressive chip variants Apple produces.

Apple Silicon variations in the M1 Pro and M1 Max we’ve reviewed previously deliver more guts in those same benchmarks, and in at least one graphical benchmark, the M2 didn’t stand out quite as well as we expected.

Synthetic benchmarks don’t always give you a great gauge as to what you can deliver, but comparatively, it also gets quite interesting. 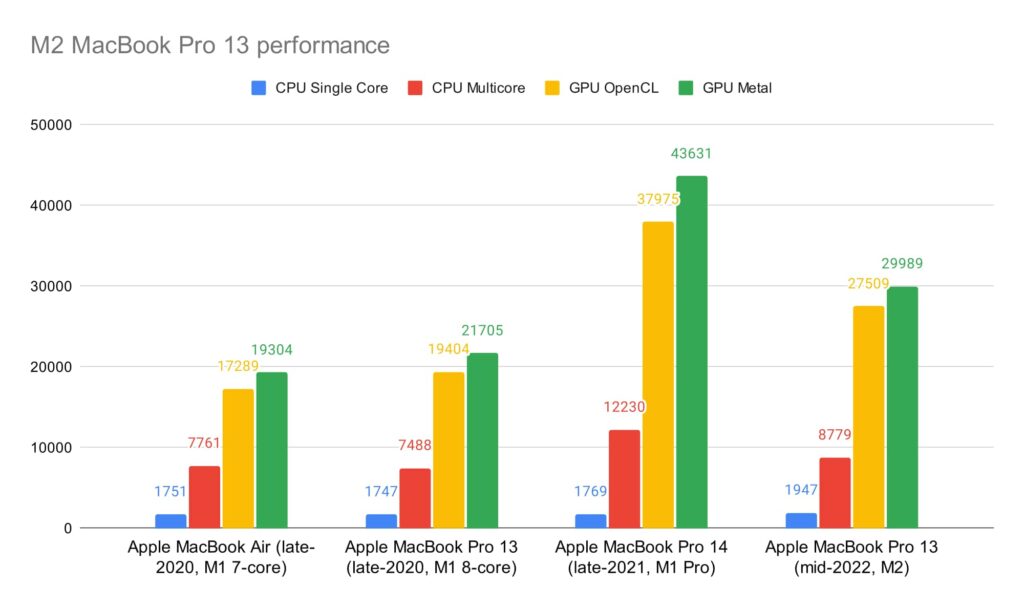 Compared to the M1 MacBook Air and M1 MacBook Pro, the M2 MacBook Pro beats both of them, wrenching a little more single core and multi-core CPU performance, with a whole heap more graphics, whether benched by OpenCL or Apple’s Metal.

Neither really hold a candle to the M1 Pro in the MacBook Pro, with multi-core CPU doing better, while our 16-core GPU offers twice the cores and more power throughout. No shock there.

In terms of practical performance, we didn’t notice a whole heap of differences between the M1 on the 2020 MacBook Pro 13 and the M2 on this new one. Image loading and saving might be a touch faster, and rendering could have been too, but we don’t think most people will see the differences.

It sure is great seeing so much power in a small and slim design. There’s just so much here for everyone. 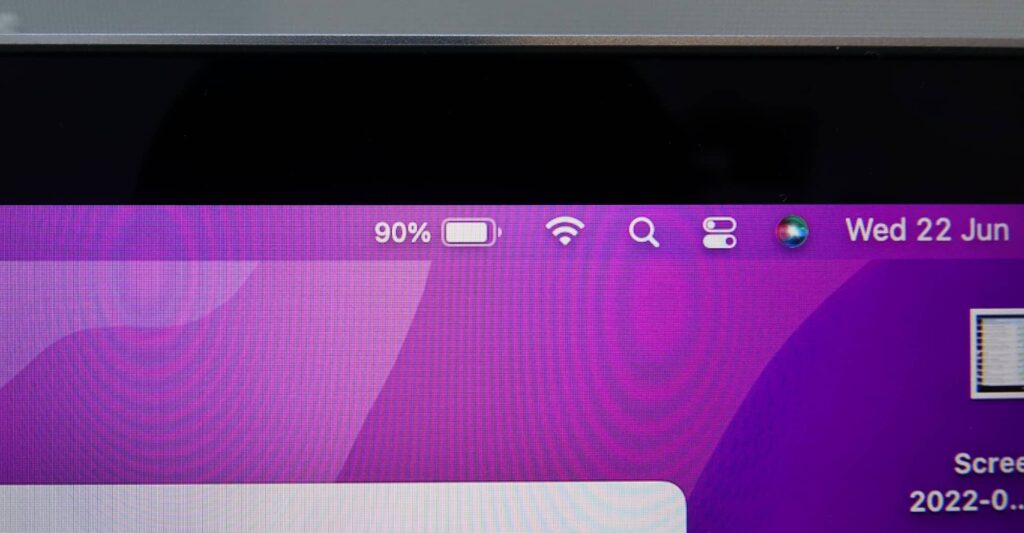 A heap of performance isn’t all you can find here, but a solid amount of battery life, too. Keep in mind, the previous generation delivered 20 hours max, and in the new model, it’s much the same.

We found we didn’t really need to charge the MacBook Pro all that often for regular day-to-day activities, though it did need to be plugged in after several hours of heavier workloads, which is entirely the point.

Regular work days mean you can probably go without the battery charger, handy if you’re heading anywhere or jumping on a flight, though video processing, image editing, and work in 3D may mean you’ll want to keep it nearby. The hardware is solid, but it’s only going to deliver so much.

Price is where things get a little weird.

Like last time, there are subtle differences between the Air and the Pro, most notably on the battery and cooling side of things. There’s a slightly bigger battery on the MBP 13, plus a more active cooling system for when performance needs get hefty. But these are quite minor, and things get even more confusing when you look at the other portable pro line-up, mainly the MacBook Pro 14.

Apple’s entry MacBook Pro 14 includes a bigger screen (14 inches), more ports, twice the memory (16GB), more graphical cores (14-cores), and the 512GB SSD for $2999 in Australia, basically charging you $700 more for a much more pro-grade system than the MBP 13. You can do a lot with both computers, but going on sheer grunt and features, the slightly more expensive MacBook Pro 14 is easily the better buy.

By comparison, bolstering the M2 MacBook Pro to 16GB RAM actually places it at $2599 locally, and then there’s only a $400 difference between the models. It’s pretty easy to see why the 14 inch model has more going for it in value than the 13 inch. We’re not even sure why the MBP 13 exists at this sort of price point. 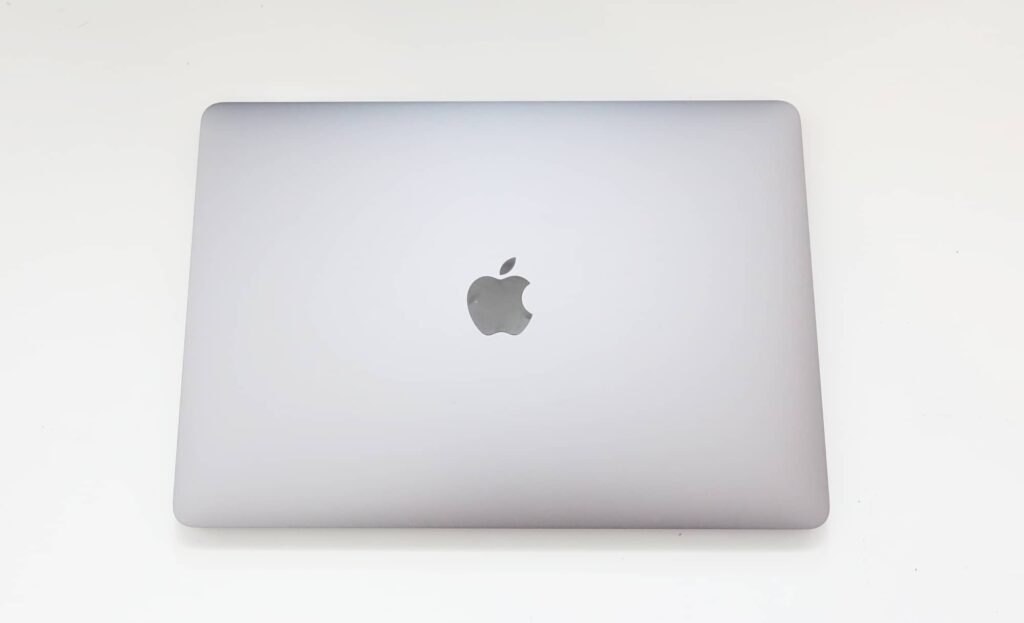 Yes, the M2 MacBook Pro is an upgraded model of something that was perfectly great already, and good luck finding anyone who can genuine flex the M1 MacBook Pro in a way that sees its performance needing an increase. But this strange disparity between the new Air, new Pro 13, and current Pro 14 doesn’t help to make the case easy for picking the 2022 MBP 13 out of the line-up.

This is one of those strange placements, because Apple’s MacBook Pro 14 is a similar size, yet is better in almost every way, while the MacBook Pro 13 misses out. It’s a new model, but lacks all the niceties of the new design in the MBP 14 and MBP 16.

No SD card slot. No MagSafe connector. No HDMI port. No new design. Lower res FaceTime camera. Two speakers compared to six. The MBP 14 has these things, as does the larger MacBook Pro 16, while the MBP 13 does not. We know which we’d pick.

You still get the OLED Touch Bar — if you still care about that — but all of the things that the MBP 14 and 16 receive as new features from that new design are MIA on the MBP 13, and it’s confusing.

This is an old design, and while that’s not a bad thing, it’s not as exciting as the changes Apple has made to the recent Pro models.

It’s the same issue with the screen: while we’ve not seen it in person yet, the Air’s new 13.6 inch screen is bigger than the 13.3 inch of the MBP 13. The 2022 Air is getting an upgrade with thinner bezels while this MacBook Pro recycles the older screen. Even the power pack has been recycled, missing out on the cooler and more compact Gallium Nitride (GaN) tech you can find with the properly updated MacBook Pro models.

It just leaves the 13 inch MBP in a confusing position, making it less of a compelling proposition in comparison to what Apple offers in either the upcoming Air or the more impressive MacBook Pro models. 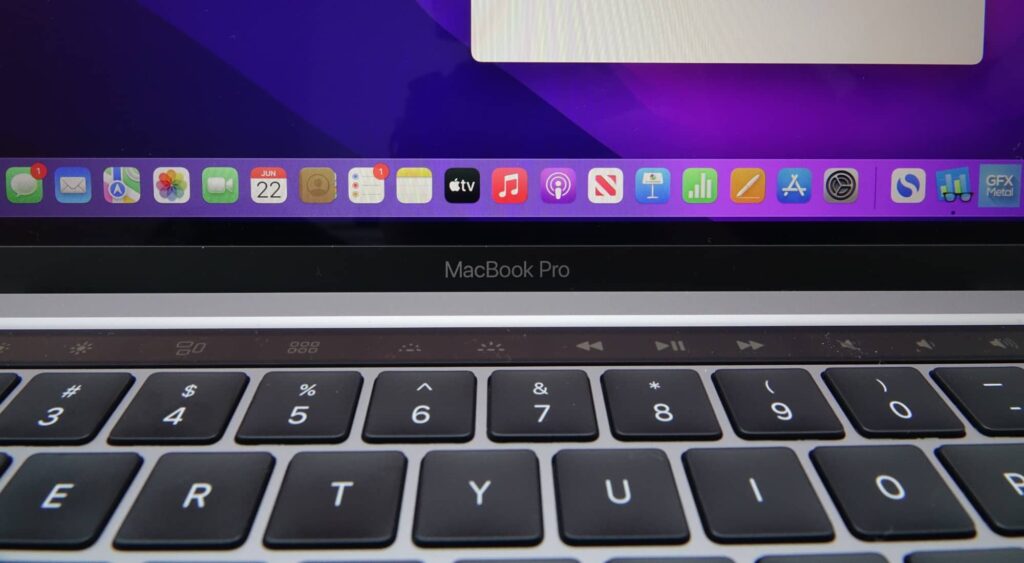 Placing the M2 MacBook Pro 13 is interesting and a little difficult. We’re not really sure why you’d pick this computer over the other models, over either the new Air or the Pro 14.

On the one hand, the performance is just stellar, delivering a little more power in a design that is still excellent. And on the other, the changes are so minimal while the difference between the Air and Pro is so stark, you have to wonder why this computer still exists. There’s a little more on the cooling side and a marginally bigger battery, capable of wrenching as much life as possible from the computer, but the new MacBook Air is still more compelling.

Make no mistake, the M2 MacBook Pro 13 is a nice computer, but the Air feels like it achieves value even before we try it, before it’s delivered. Meanwhile, the MBP 14 offers just that little bit more from a computer that is nearly the same, but clearly isn’t.

We’re still not entirely sure who the M2 MBP 13 is for.

Most will gravitate towards the newly designed Air, which has just as much going for it, while others who need more guts will likely find themselves at the reinvented MacBook Pro models. In many ways, this feels a little like stopgap: it’s a Mac for people waiting for an M2 MacBook Pro 14 variant, ahead of when Apple launches one, either late this year or sometime next.

The other Pro computers are in no danger of needing an upgrade yet, either, just like the M1 MacBook Pro. The M1 is still very capable, with the M2 just turning it up a little more. There’s performance to spare.

The problem with the MBP 13 is that while there’s performance to spare, you’re not getting anything extra, and other models feel like better value. That makes it nice but hard to place.

We’d consider your options if you’re genuinely considering the M2 MacBook Pro 13. The model up in the MBP 14 seems like the better option for those in need of a proper pro-grade machine, while the new Air is looking to be the one to choose for an M2 experience. We’re sure there are people out there who will love the M2 MBP 13 for what it is, we’re just not entirely sure who they are. 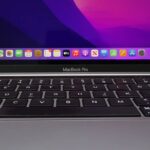 Apple M2 MacBook Pro 13 (2022)
Design
Features
Performance
Ease of use
Battery
Value
The good
M2 is a solid performer
Old design is still lovely
Excellent battery life
Great keyboard
If you still like the OLED TouchBar, it's here
The not-so-good
Only two Thunderbolt ports, one of which will be power
Bezel on the screen is thicker than what you get on the MBP 14 and MBP 16 (and potentially the 2022 Air)
No SD card slot
No MagSafe charge port, which means no GaN charge pack
Two speaker system
Both the new MacBook Air and MacBook Pro 14 seems like more compelling choices
4