An iPad can do more than stand up on a keyboard case, and with TwelveSouth’s HoverBar Duo, it can become another screen in your life.

Ever since the world was plunged into working from home, our gadgets have been doing a little less. Our phone doesn’t go out as much anymore — because we’re not out as often — and our tablets aren’t keeping us company on buses and trains anymore. Thanks, coronavirus.

The world has changed, and that has changed how we use our gadgets. While we’re sure it will go back to normal at one point (or even redefine a new sense of normality), some of our devices can be repurposed in our lives, and you might have realised it, too. Our phones might be a better webcam than the typical one megapixel camera our laptops often come with, while a tablet could end up being a second or third screen. It is entirely possible for the devices that are extra in our lives to take on a new purpose in the work from home (WFH) world, though they may need a bit of help in getting there.

Simply put, they need to be held up to reach that higher purpose, and for that, there are gadgets to help. Phone docks and tablet cases are the logical approaches, but accessory and peripheral maker TwelveSouth may have a more compelling option that looks a little cooler, too.

What is essentially an arm for your device, the HoverBar Duo allows to you to raise your gadget up a little, and in doing so, may raise it to a higher purpose in general.

What is the HoverBar Duo? 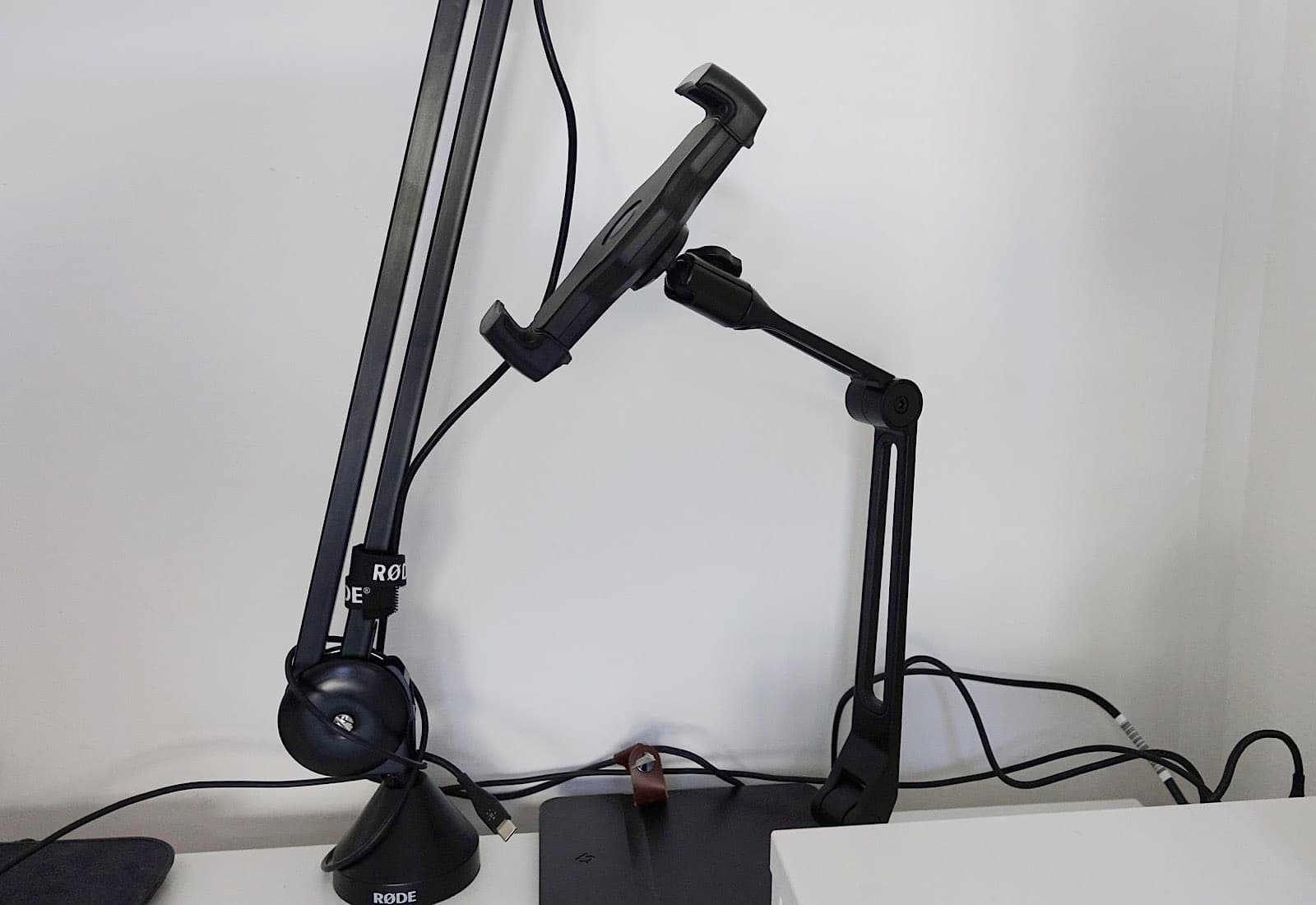 A special stand for the iPhone, iPad, or any other phone or tablet that you want to hold up, the TwelveSouth HoverBar Duo is essentially a boom arm mounted to either a clamp or a weighted stand that can raise that device up like it was standing on its own.

The idea is simple enough — it’s literally a boom arm with a device grip on the end — built to hold a phone as small as 4.7 inches or a tablet as big as roughly 13, meaning it can take either devices as small as the iPhone 12 Mini or devices as big as the iPad Pro 12.9 if need be, providing a lot of choice in terms of what it can hold.

Much like how simple enough the idea is, so too is the design or with a device holder and ball joint on a set of arms mounted together to either your desk or a heavy plate that sits on a table or desk.

In short, it’s a gadget that holds your device up, opening up the options for what it can be used for. An extra screen for a Mac, your own personal news feed chyron with an RSS reader, a photo frame, a recipe reader; the choices are endless for how a phone or tablet could be re-employed in your life and on your desk. 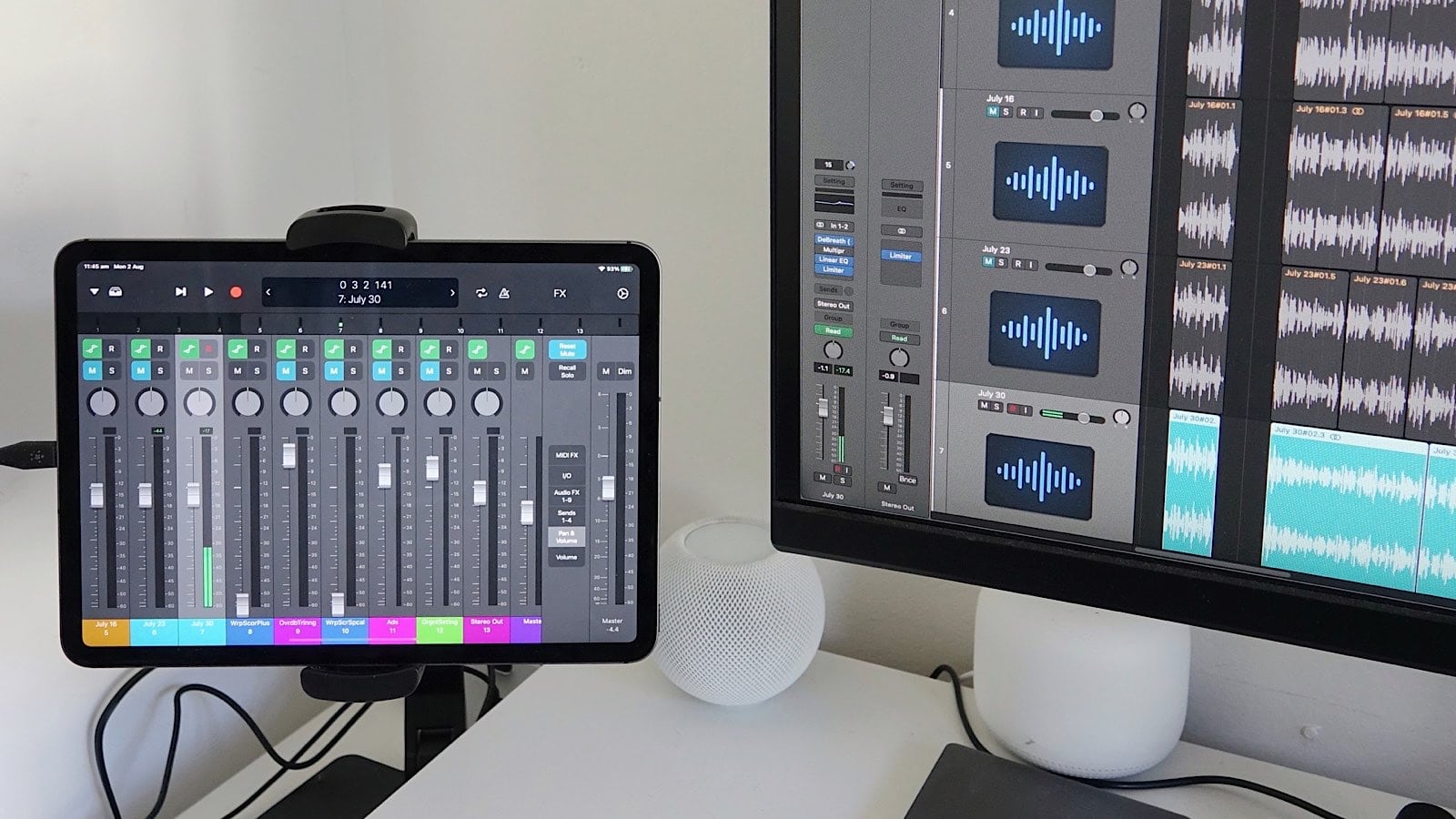 Depending on how your desk or table is set up, TwelveSouth provides two ways to mount it: use a clamp or the stand. Each is different, of course.

The clamp requires you have an edge or shelf to hold it to, and much like a microphone boom arm, holds the HoverBar Duo firmly. The stand is similar, but instead provides a flat surface and a weighted block to keep the arm and device in place. The heavier the device, the more likely it is to struggle to be held up on the stand, so you might want to switch to the clamp to provide more resistance, or even use one of the included hex keys to tighten up the whole thing.

Each clamp includes a little space to let you feed in a cable, handy if you want to charge your device, and means you can keep up a phone while giving it charge.

It’s a pretty simple idea, and one we used to hold up several generations of iPhone plus a couple of iPad and iPad Pro generations, finding that the largest and heaviest would often need the arm to be higher with the desk stand, lest the weight causes the whole thing to fall over. 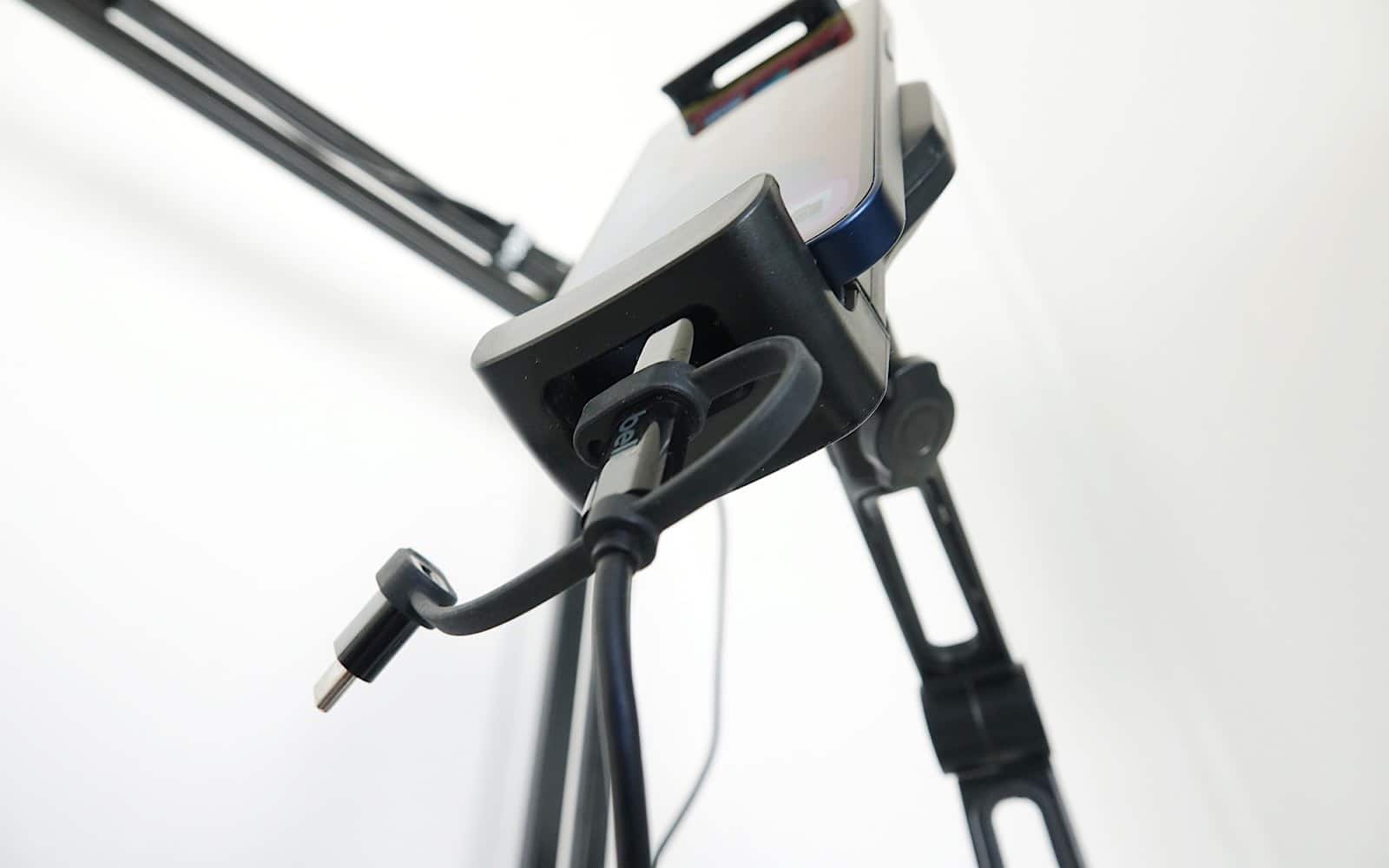 Possibly the one thing is might need is a little more strength in the materials. The arm is made from an alloy and it appears to be in the weighted desktop stand, as well, but the device holder and ball joint appears to be plastic, and as such you might see a fair degree of movement when you touch and prod your mounted device.

By themselves, standing up and not being nudged, the HoverBar Duo is stable. Start touching it and you might start noticing the shake, the vibrations and such. It’s not helped by the plastic bits, which don’t feel quite as strong as the rest, though the solution may well be the same approach as what you do when you’re faced with a bigger tablet: use the clamp instead of the stand.

Opting for the stand is something of a convenience — it’s easy and requires little to no effort setting it up — but switching to the clamp means you have less risk of bigger tablets toppling over.

At $139.95, the HoverBar Duo is a pricey accessory and peripheral, but it’s one that can give deliver some genuine benefits for users. Throughout our review, we used the HoverBar Duo to hold up an iPad Pro as a secondary screen in macOS Sidecar as well as using it as an on-screen mixer with Logic Pro, while also found it was a great way to lift phone calls from the iPhone to a tablet aimed at the head.

An iPad isn’t the only use for a HoverBar Duo: you can mount an iPhone in its claws, aiming either the selfie camera or the rear camera at you and using extra software to turn it into a webcam or a camera source, handy if you happen to be a filmmaker.

You could even set up the iPad or another tablet on the stand alongside a wireless keyboard and mouse, and provide some sense of normality using a tablet with the necessary productivity accessories, turning the whole thing into a modern and minimised desktop of sorts.

And for the folks at home just trying to find a reason, you can mount the HoverBar Duo to shelving or leave it in your kitchen to turn a phone or iPad into a stand for those devices if you’re following a recipe, or even just set it on a table in your home for proper portrait lines of sight with FaceTime calls and video calls. In a Covid lockdown WFH world, the HoverBar Duo might just provide a camera angle that isn’t aimed up at you like a regular tablet case manages. 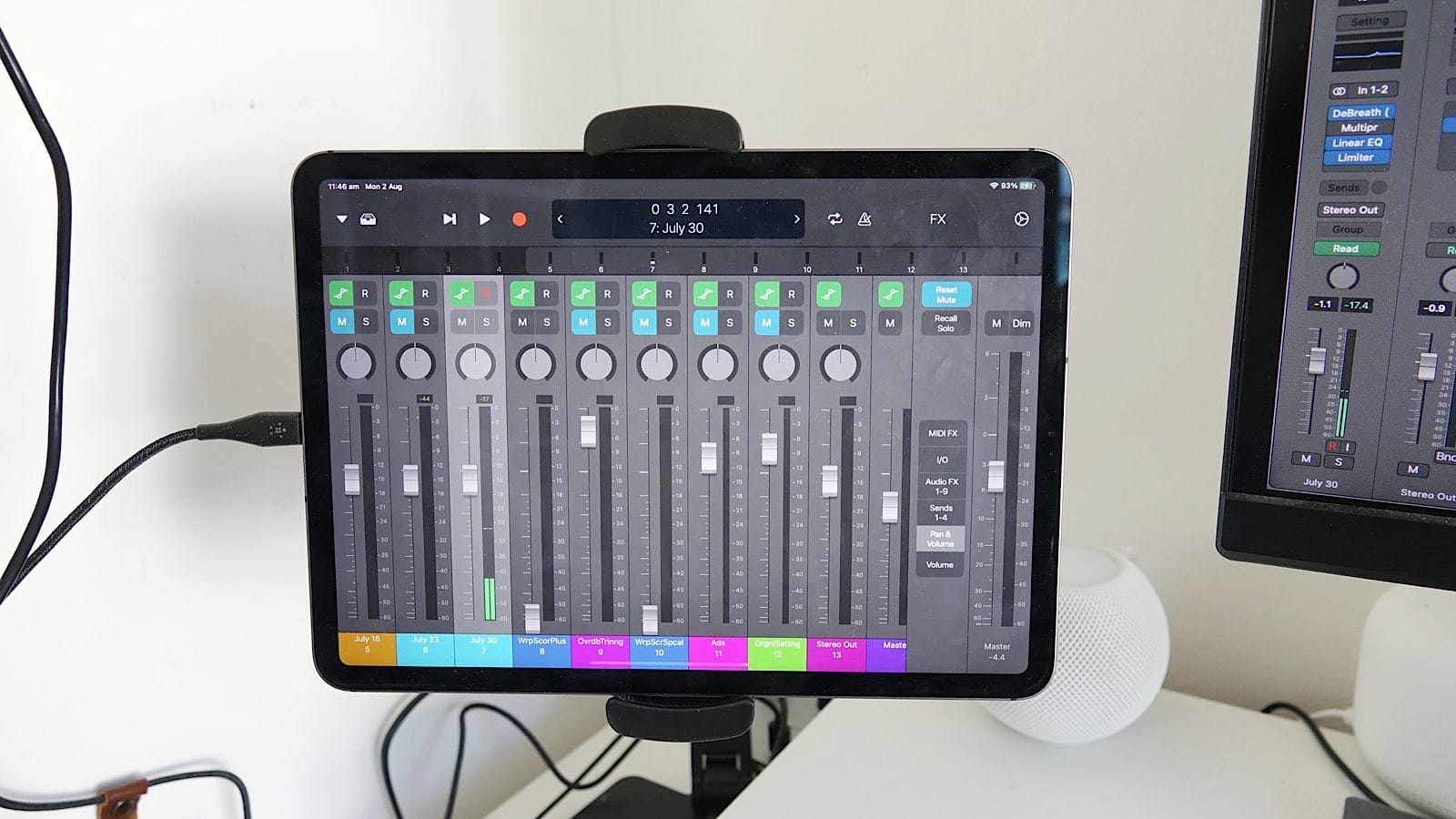 Ever since we started working from home, the need to make our gadgets do a little more has become a thing for us. Our phone is never far from a charger and our tablets less used because we’re closer to our laptop, so these extra bits and bobs in our lives can feel like they’re doing less and less.

We’ll get back there later on, but for now, making those gadgets seem more worthwhile is important, and that’s what the HoverBar Duo is bringing to the table, almost quite literally.

The HoverBar Duo raises the possibilities of what devices can do because suddenly there’s more your devices can do. While it needs a minor tweak here and there, the idea of a stand that works this well for phone or tablet is a win for the home and for the work-from-home office.

There’s no one app that makes the HoverBar better overall, mind you; that’s not what TwelveSouth is pitching. Rather, the HoverBar Duo is a way to give your gadget a helping hand while giving the movement of all your limbs back. It’s a welcome addition to our desk and well worth checking out. 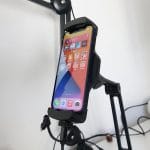 TwelveSouth HoverBar Duo
The good
Takes an iPhone or iPad for nearly any size, or any nearly other device for that matter
Breathes new life into devices by making them do something else
Weighted desk stand features a little notch for the Apple Pencil
The not-so-good
Can feel a little wobbly at points
Depending on the weight and position, can topple over
4.5