In the Kobo Libra 2, Rakuten has shown that competing with the Kindle doesn’t mean making the same device. Rather, it can hold its own with some distinctive features.

Even though nothing will ever replace the feel and smell of a good book or any aged book, eReaders are becoming so useful, it can be hard to pick.

A real book brings a strong feeling of something classic, and with it the texture of the page and printed word, with a genuine feeling you get when you turn the page coupled with that smell each crisp piece of paper delivers.

Meanwhile, an eBook reader brings with it convenience and simplicity. While a book is lovely, an eReader is properly convenient, packing in lots of books in one place, and possibly some extra features, too.

This year, in the Kobo Libra 2, those extra features could well be the thing that stand out, providing some distinctive additions that help Rakuten’s Kobo brand compete more aggressive with the obvious eReader contender from Amazon, the Kindle.

You won’t see access to Amazon’s massive online bookstore through the Kobo Libra 2, but you will see some rather interesting additions, most of which bring choices to what you read and how you read, and even for how much you pay to read, as well.

What is the Kobo Libra 2? 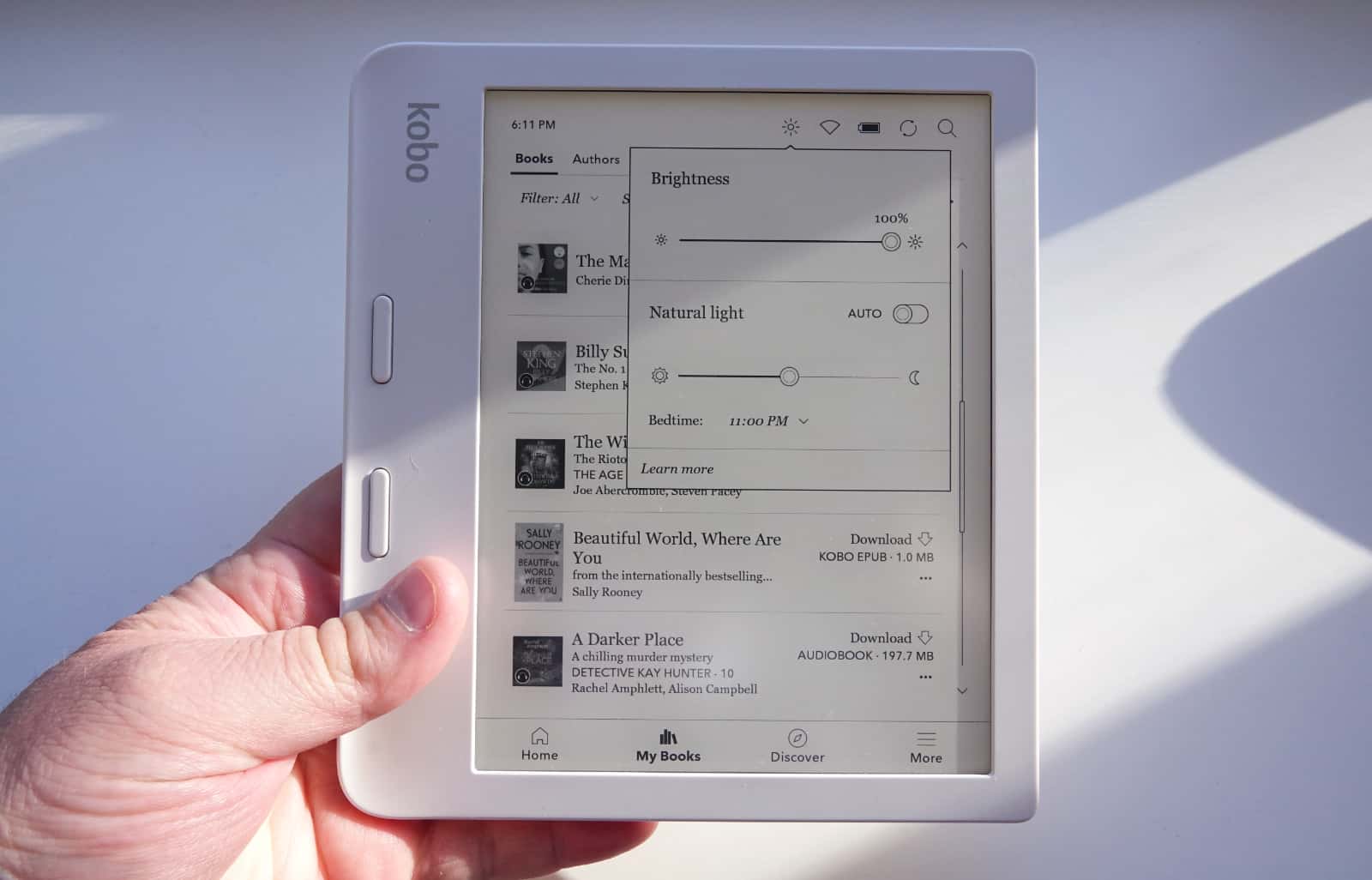 If you’ve heard of a Kindle or another eReader, you probably know exactly what the Kobo Libra 2 is, because it’s one of those.

Simply put, the Libra 2 is Kobo’s latest electronic-ink screen for your books, delivering a 7 inch eReader display with a built-in light and warm tone to a small, lightweight and IPX8 water-resistant eBook reader. Launched alongside the Kobo Sage, the Libra 2 is styled as an eReader for everyone, while the Sage model delivers a slightly bigger screen with support for an optional stylus.

Inside the Kobo Libra 2, there’s 32GB of storage, while the screen is an eInk Carta 1200 display, offering a pixel clarity of 300 pixels per inch, making it fairly sharp, and supporting of 12 different fonts on the device itself. The Libra 2 will also handle a few different forms of eBook, primarily covering EPUB, but also working with PDF, MOBI, TXT, RTF, HTML, and if you happen to read comics, CBR and CBZ.

Audiobooks are also supported by the Libra 2, thanks to the inclusion of Bluetooth, which is needed to run them, meaning you need Bluetooth headphones to play back audio. Granted, it’ll only tackle audiobooks from Kobo’s store, but it’s a start all the same. 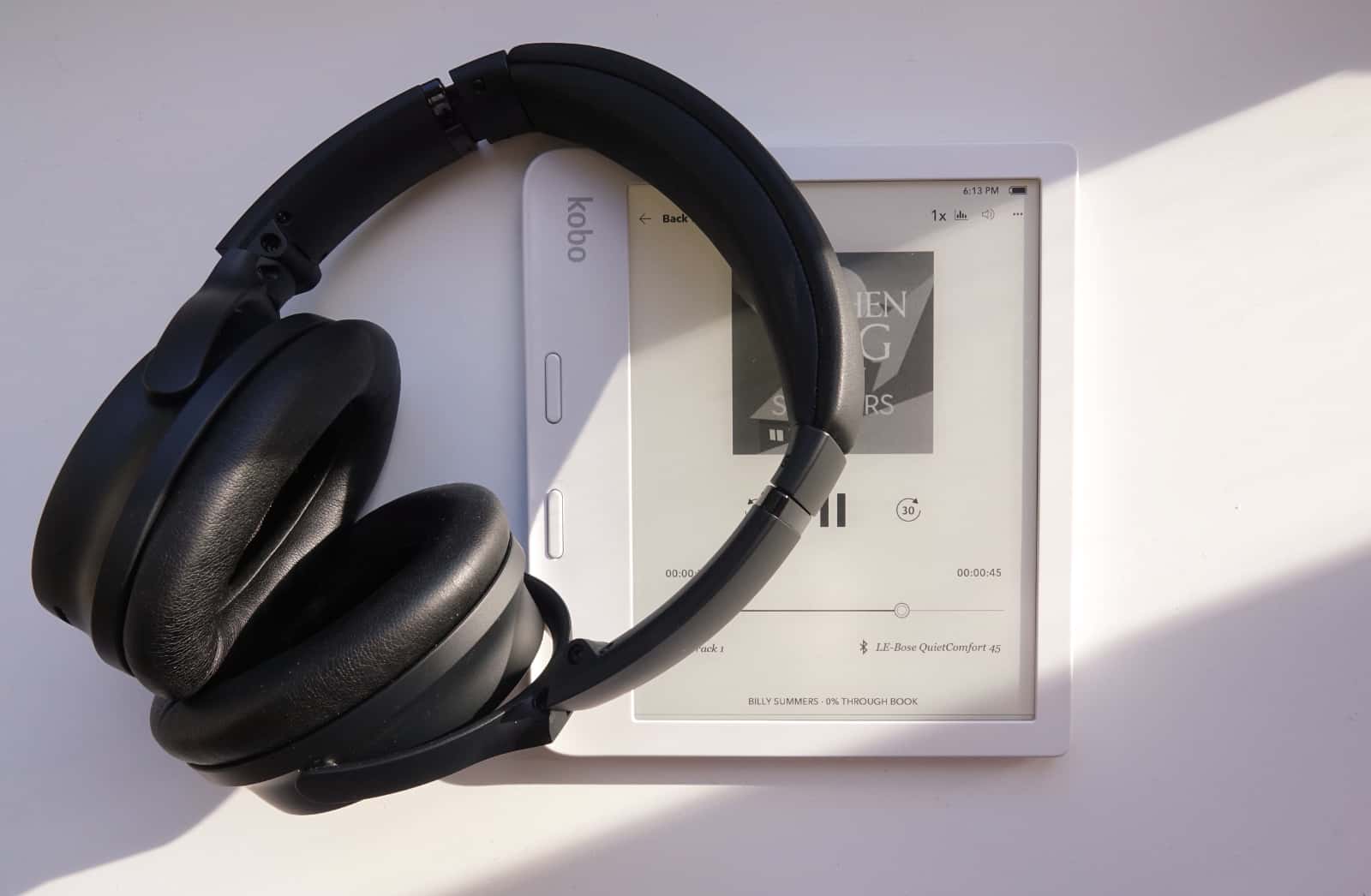 Grab some books from a store you like, load them on, and start reading. That’s the idea behind every eReader, and the Kobo Libra 2 is no different, save for one part of that spiel: “a store you like”.

If you have eBooks you’ve bought over the years squirrelled away on some drive in your home, or even saved in the cloud ready for you to download to a new home, as long as they’re stored in a DRM-less EPUB format, the Kobo Libra 2 will take them, much like any other Kobo has.

That’s a big difference between Amazon’s Kindle, which is locked to Amazon for books, but can load PDF files, which the Kobo devices can, as well. 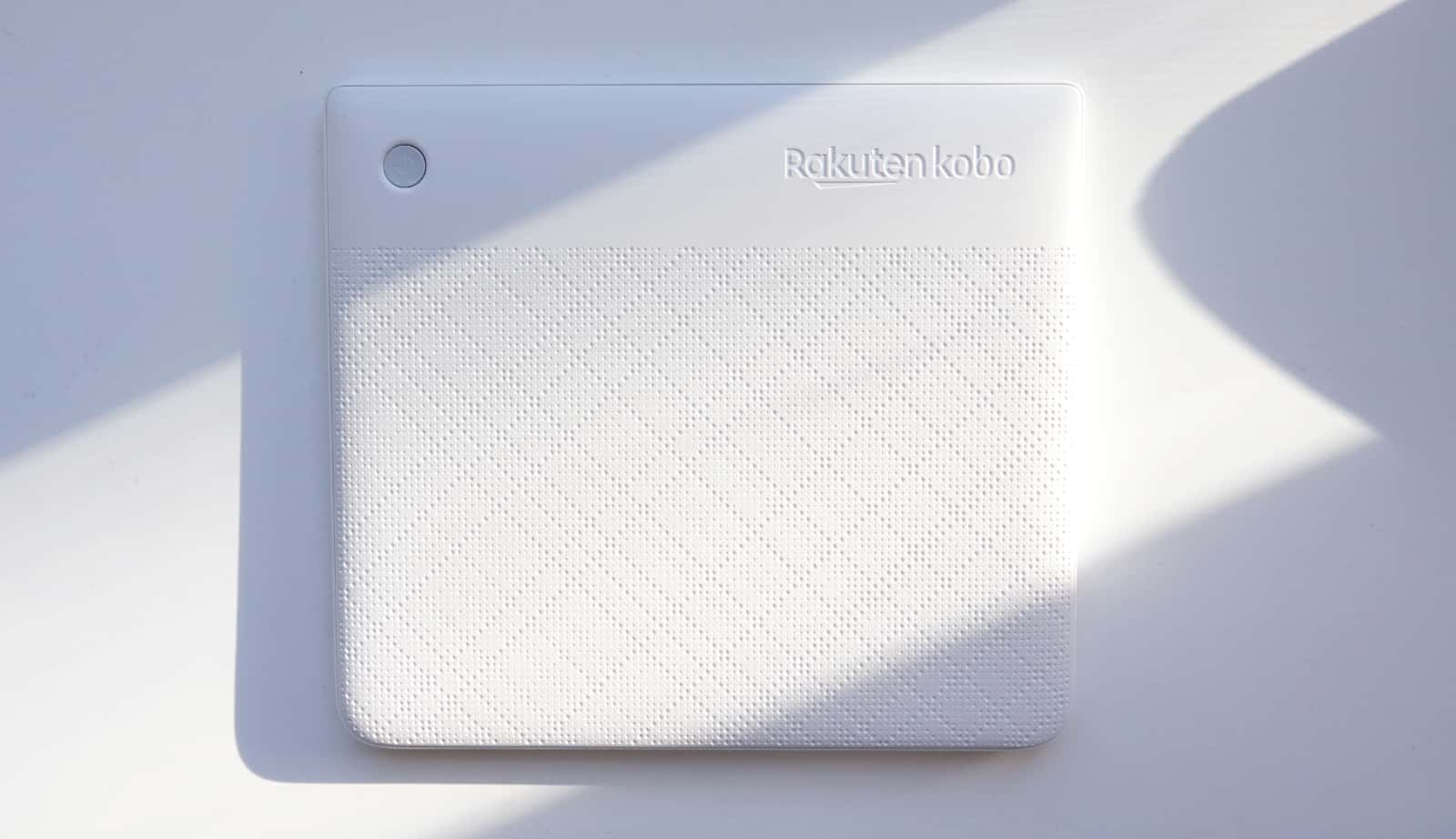 With a comfortable design textured with dots on the back and a combination of both buttons and a touchscreen, Rakuten has done a pretty solid job of making the Libra 2 comfortable in the hands and easy to use.

Offering an ambidextrous design, you can hold it in your left hand or right, rotating the screen and having the buttons change their orientation, working either up or down.

Kobo completes the usability by letting you rotate the screen at any angle, not just the standard portrait hold. If you flip to a landscape view from either side — buttons at the top or bottom — you’ll get a marginally larger view to read your books with.

That’s a win, because you’re not locked into a specific style of reading, and can go your own way.

The Libra 2 also support up around two weeks of battery life we found, though that’ll be dependent on how often you use it. Read more than a couple of hours per day, and you’ll see that battery life deplete faster, though thankfully Rakuten has adopted the Type C standard, so it’s not as if charging it is cumbersome or remotely difficult. 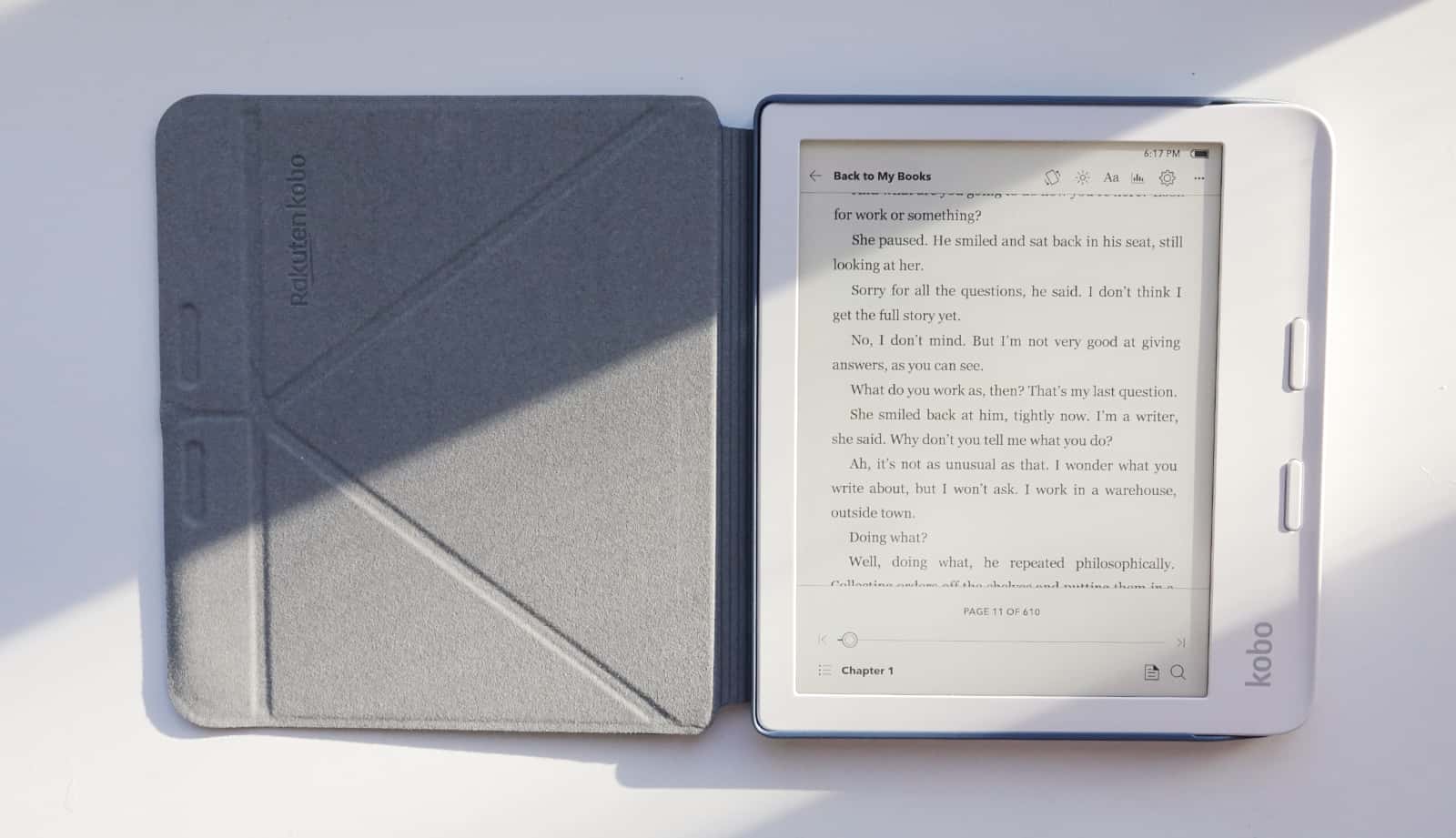 For the most part, Kobo has nailed the Libra 2. If you’re not a fan of Amazon or the Kindle store — specifically, if you want to buy books from beyond Amazon, because the Kindle doesn’t allow that — the Libra 2 gets it right.

With this eReader, you’re not limited to buying from Amazon; you can get eBooks from anyone that sells an eBook in EPUB format, be it Dymocks, Humble Bundle, your local library, Booktopia’s all-you-can-read service, or yes, even Kobo’s online store.

That’s great. It’s a feeling of genuine liberation that you’re not locked into a specific store to buy books for your eReader. We’re not saying the Kindle is bad — it’s not — but you have to give Amazon money, and if you prefer a local book store or can’t find what you want on the Amazon Kindle store, Kindle eReaders largely lock you out. Kobo does not. That’s a win.

What isn’t a win is the speed of loading, which had no problems reading a 30MB EPUB we had on coding levels using the Unreal Engine (super exciting if you’re into it), but struggled with every comic EPUB file over 100MB, loading images slowly and not utilising the full screen properly. 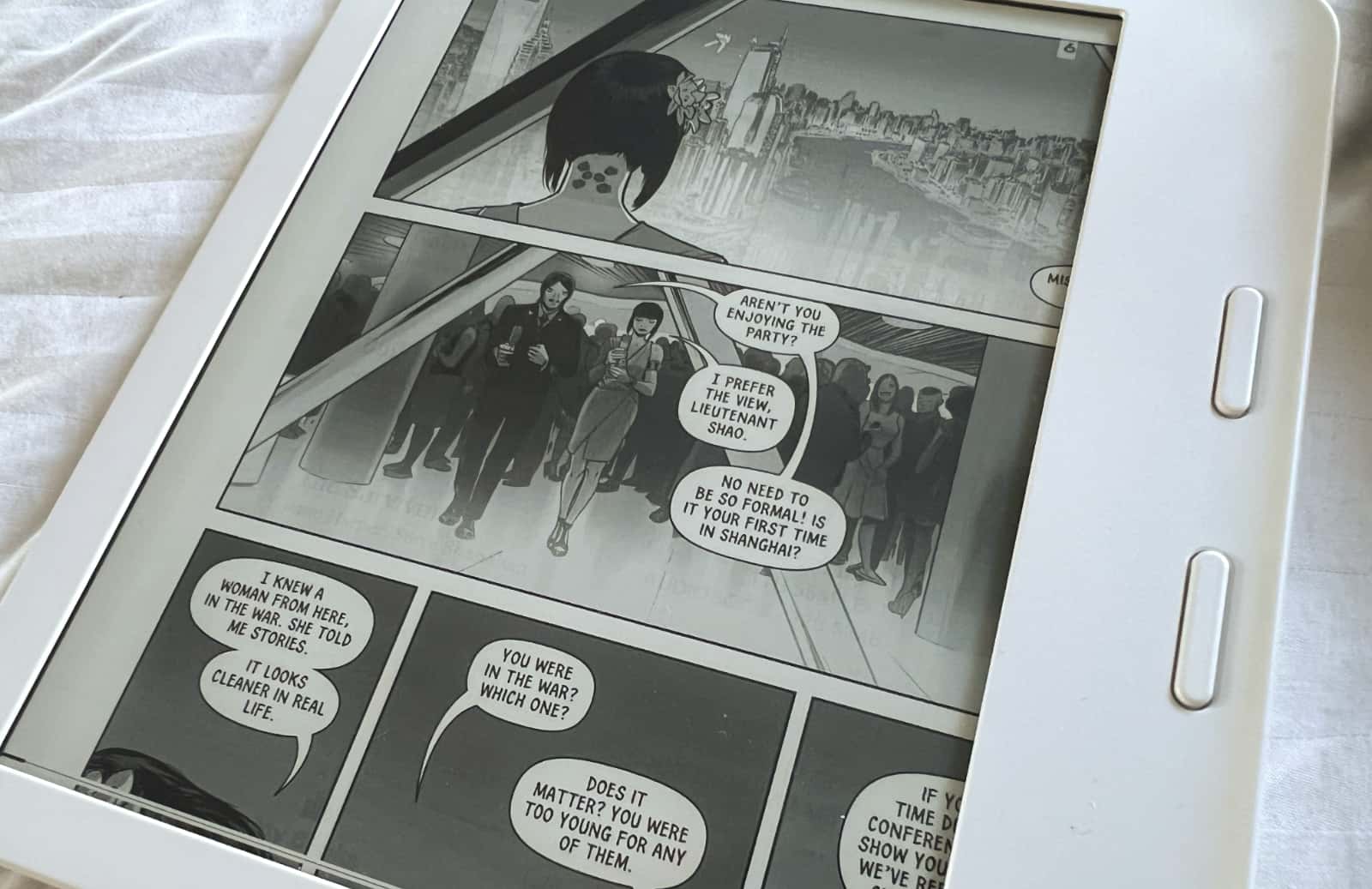 Large EPUB files really struggle on the device, to the point where you may end up getting a white screen while the hardware clearly doesn’t have the best time. At least we could rotate the display to make better use of the images, but big files are not the Kobo Libra 2’s best friend. You might want to stick to using a tablet for comic EPUB files if you have them.

That rotate situation is interesting, too, because you can rotate the screen for book reading, handy if you just want to prop the Libra 2 up against a wall or with a folding case.

However you can’t leave it rotated for use browsing the store or the eReader’s menus. They’re portrait only, sadly, creating a bit of a disrupted flow to how you need to use the Libra 2.

But at $279.99, there’s clearly a lot to like about Kobo’s Libra 2, providing a water resistant alternative to the Kindle that also comes with similar features, namely the warmer lighting and support for audiobooks, as well.

Compared to the 32GB Kindle Paperwhite model, Rakuten’s Kobo Libra 2 nails value quite well. For $10 less than the Signature Edition Paperwhite, the only model with 32GB onboard, you get a similar screen with both lighting and a warm tone, plus support for Bluetooth for audiobooks and can load in books using alternate sources.

There’s no wireless charging like in the Kindle Signature Paperwhite, but it’s such a small feature, we’re not sure anyone will care. 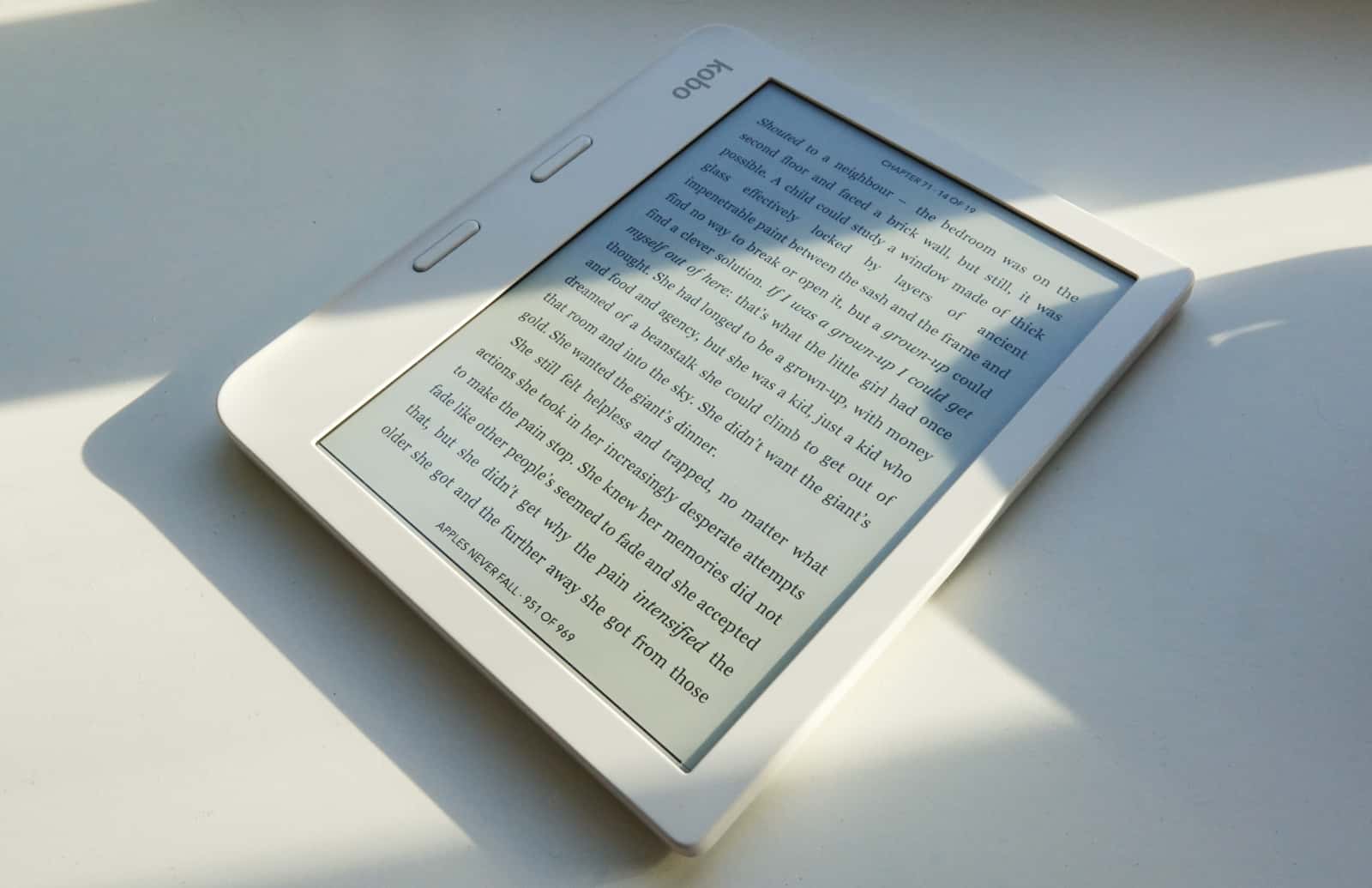 Fleetwood Mac would be thrilled with the choice offered by the Kobo Libra 2, because it’s a style of eReader that lets you go your own way, giving you something not always delivered in eReaders: choice.

You can choose how to hold it, where to use it, and most importantly, where you’ll buy your books from if you decide to buy and use it. This is about the most choice-friendly eReader we’ve ever seen, and that will suit many.

There are still plenty of reasons to choose a Kindle instead, particularly if you’re happy to live in the Amazon ecosystem. However, if you’re someone who already has a collection of eBooks or a store you’d prefer to give money to, there are some clear reasons why the Kobo Libra 2 makes a solid bet. 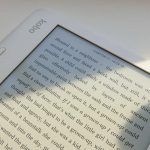 Kobo Libra 2
The good
Fast and sharp screen
Allows you to rotate the eReader so that you have a wider view to read from
Includes a warm colour tone
Water resistance
Plays audiobooks over Bluetooth
Textured design makes it easy to hold
The not-so-good
Can struggle with larger imported files
Rotation doesn't work in the store or main menu
4.3