JBL’s latest headphones, the Tune 760NC, makes the case that noise cancelling and warm sound needn’t be expensive. But is there a compromise, and if so, where?

With a plastic design and leatherette pads, JBL’s recent Tune 760NC feels like it’s focused on folks looking for a compromise between the expensive models of the high-end and the portability in the low-end.

The plastic design is very much focused on plastic, with a hint of padding at the top, and the material combination essentially being matt and shiny plastic in different sections. It’s not a style that’s going to win awards, but it’s one that all in black is definitely functional, and looks nice enough, too.

You’ll find five buttons on the bottom, handing volume, playback, noise cancellation, and power, and a 2.5mm jack, as well, something of a thing that JBL keeps doing, which >a href=”https://www.pickr.com.au/reviews/2017/jbl-everest-elite-700-headphones/”>you can see in 2017’s Everest 700 noise cancelling headphones and still seems to stick around four years later in this model, as well.

We’d say the big deal in the design is actually the pads, however, because they’re as large as what you typically find in the high-end, with something more like a circumaural headphone that surrounds an ear. Kinda, sorta. 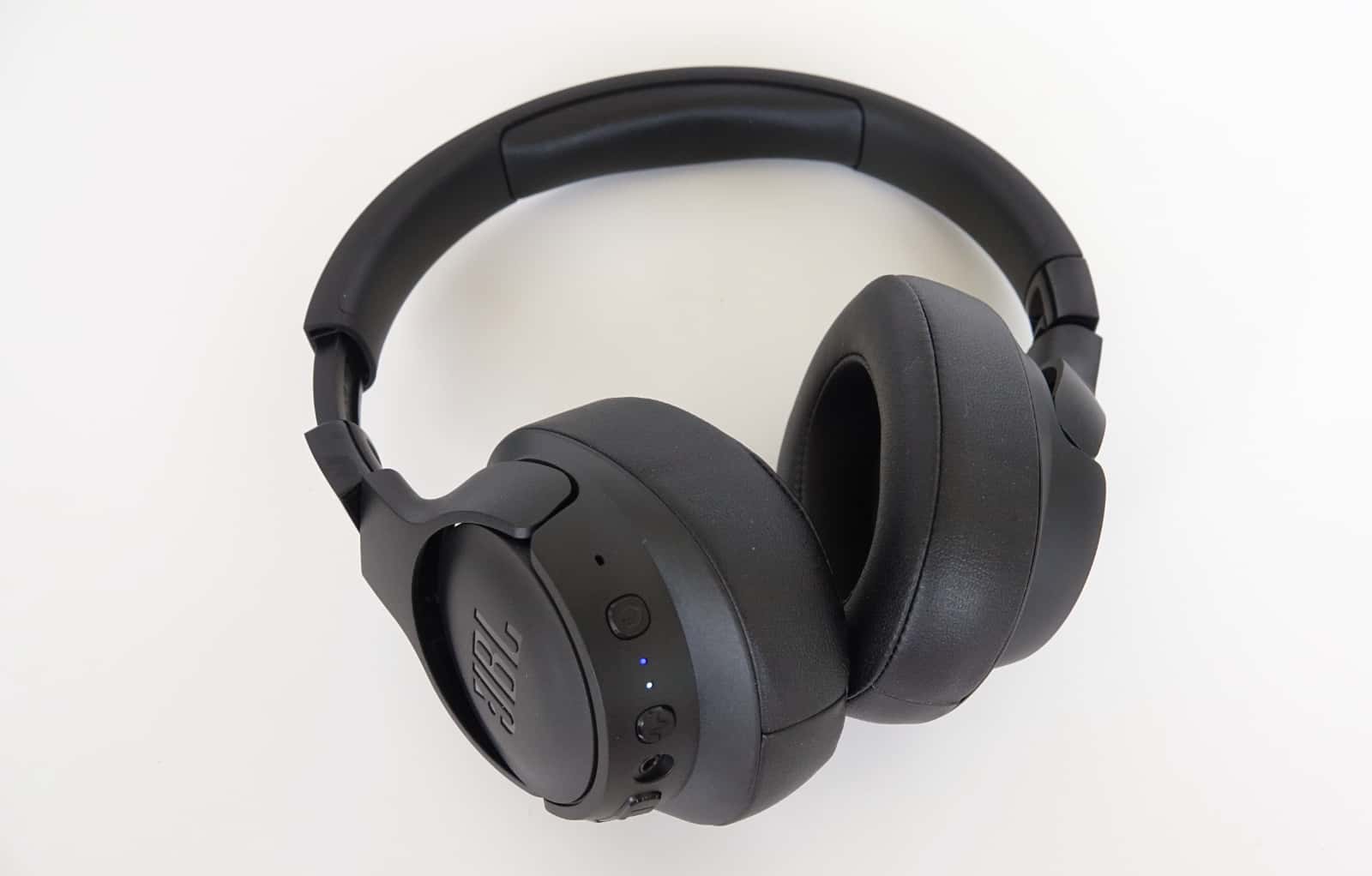 Offering relatively sizeable pads that hug your ears, the Tune 760NC feels like a bigger pair of headphones, while still retaining some of the portability of a smaller pair. They’ll fold up nicely, while the pads are a little bigger than a typical on-ear headphone, and deliver a bit of a loose hug to your ears.

The controls, however, can feel old school and cheap. While many headphone makers are shifting to touch panels, JBL has kept its tried and tested touch of buttons on the bottom right side, covering volume up, music control, volume down, and then separated by small sections, noise cancellation and power.

Granted, the controls are more feature-driven than other headphones, but they’re cheap and plasticky, can be heard every time you press them, and you may need to remind yourself what you’re touching by taking them off every so often. First world problems, it seems. 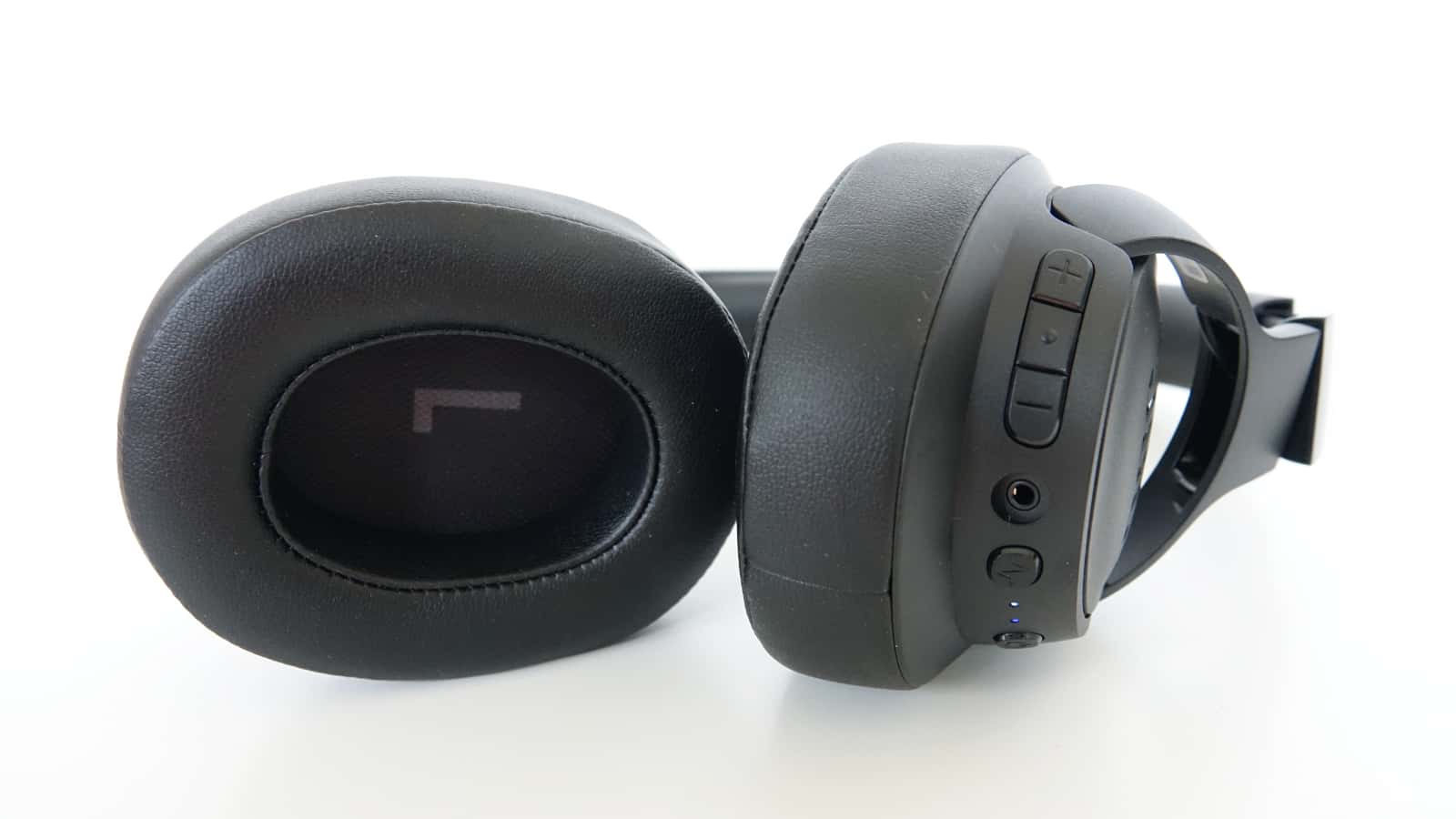 We’re hardly bothered by that, however, and yearn to see if JBL’s understanding of audio translates well to a pair of relatively inexpensive headphones, which is what the $199 Tune 760NC qualify as.

As usual, it means we’re running them through our Pickr Sound Test, which is what we use for all sound gadget reviews here, and something you can listen to for yourself on Spotify and Apple Music, to name a few.

That starts with electronic, with a deep bass hit from Tycho’s “Glider” punching hard, showing you just what JBL’s “Pure Bass” is all about. A feature the brand advertises on its headphones, the Tune 760NC means to slap you with bass where it matters, and that’s what you’ll get here, bolstering the bottom end and giving everything a hint of warmth across the board.

While the synth of Tycho is clear and well-spaced, the track starts our Tune 760NC review with obvious warmth, pushing out instrumentation in the mids and lows that gives it a little more room to breathe than a standard pair of headphones. It’s a great first impression for a pair of $199 headphones. 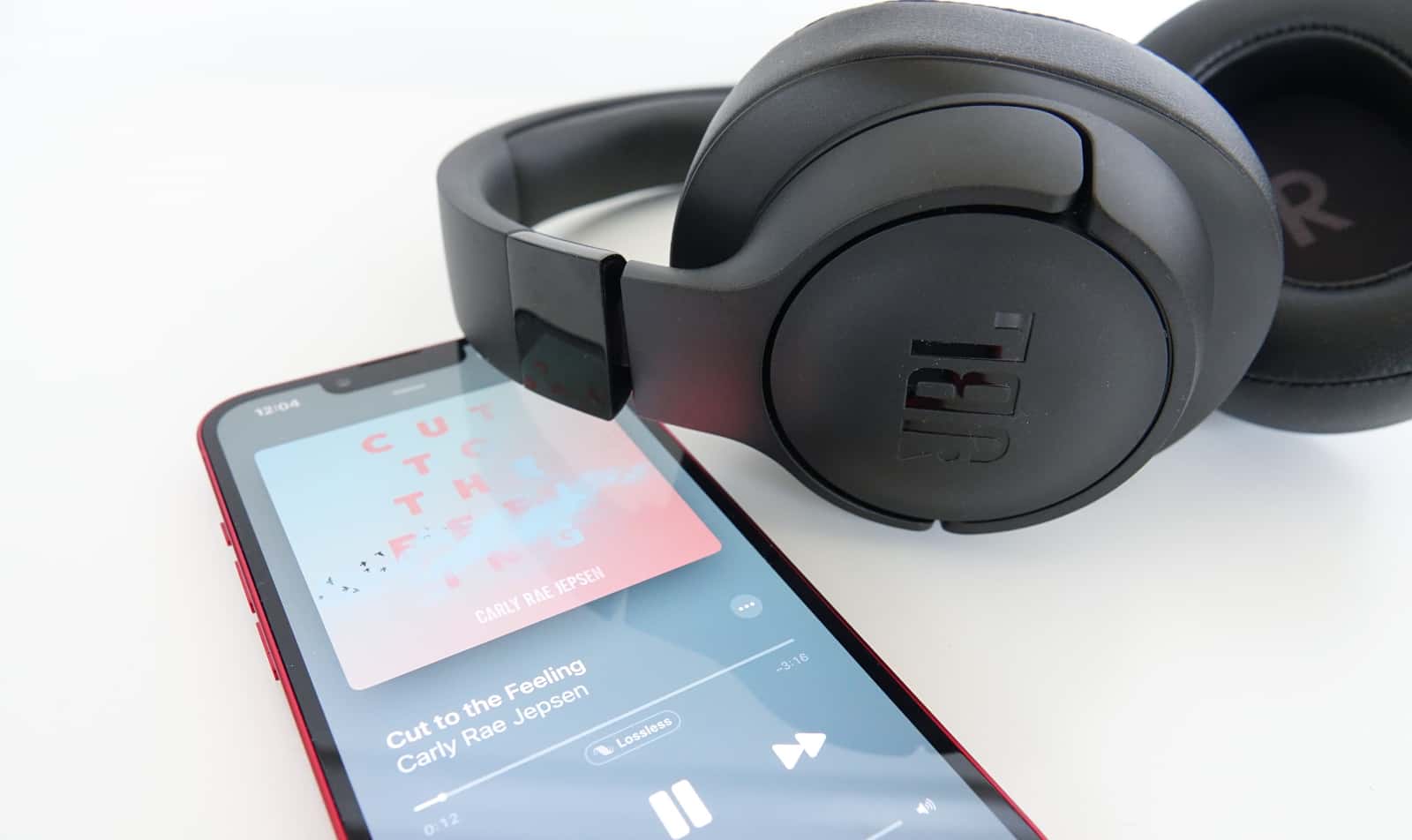 In poppier tracks, the deep bass doesn’t always resonate as clearly, mind you. With Carly Rae Jepsen’s “Cut to the Feeling”, the sound is nice, but the big bass push can feel flatter, blending together and lacking the obvious independence we started the sound test with. It recovers — Ariana Grande’s “Into You” and Charlie Puth’s “Done For Me” drive the bass response just as well — but it’s enough to tell us the capability of the Tune 760NC isn’t always going to be about versatility.

Things fare better in rock, where we found the headphones handled balance quite well, hardly surprising given JBL’s typical profile, which is often a touch warm thanks to more focused mids and bass, something we found in these headphones, as well.

For instance, listening to The Beatles, we were offered a fairly spacious soundstage where the percussion wasn’t lost to anything, while the bass guitar and drums had ever so slightly more grunt than the wailing guitar, with the vocals just matching nicely. The bass resonated very well, in fact, enough for us to say the comfort here was delightful.

You also won’t get quite that level of bass and warmth if the headphones aren’t powered, or more specifically, if you just plug them in using a 3.5mm cable to your source. That’s one test that didn’t surprise us, with the headphones being very passive and much calmer when they were used without power. This is mostly to be expected, but some headphones strike the balance regardless, and these did not. 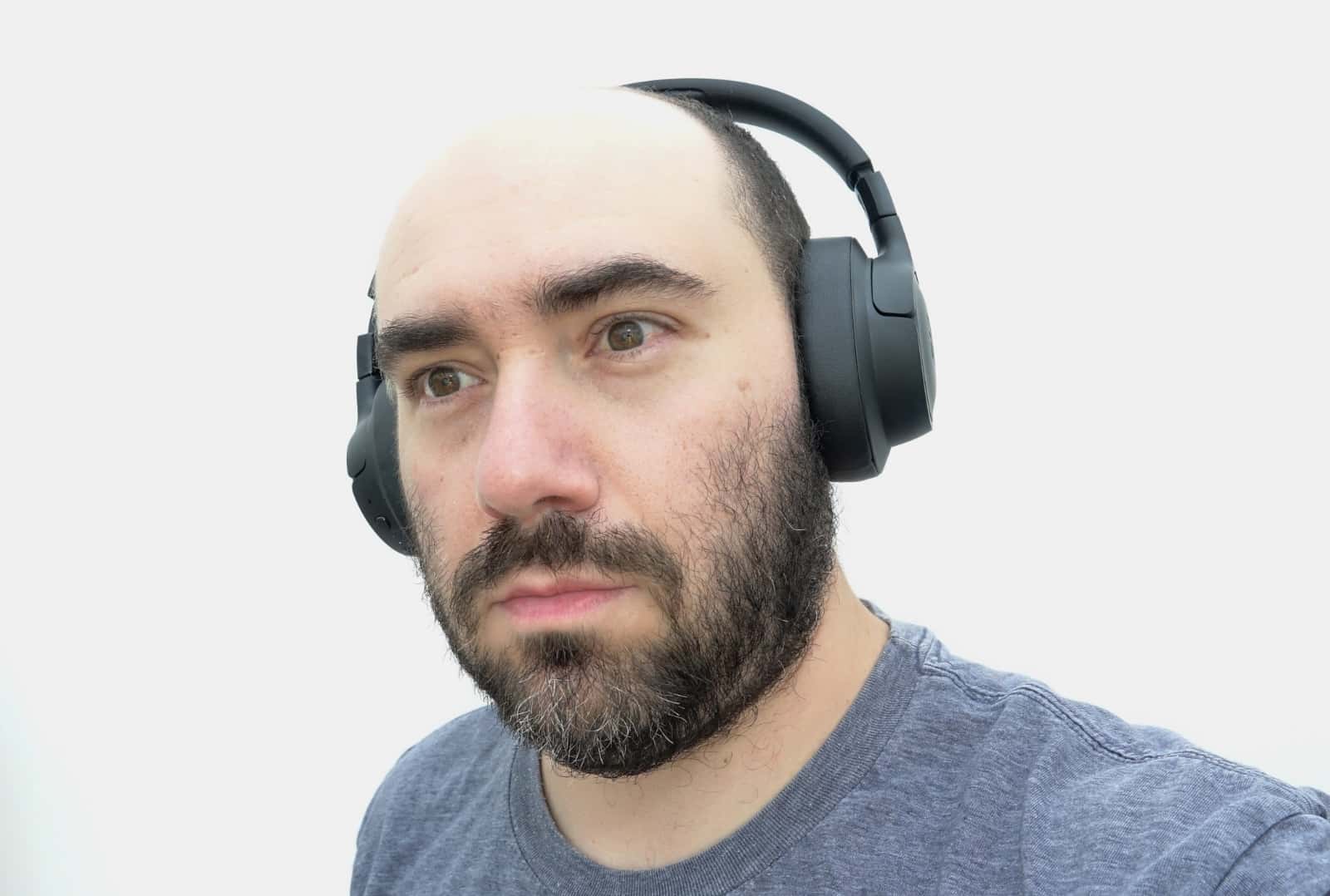 In short, some things may sound better than others on the Tune 760NC, but to get the best chance of warmth here, have them powered with ANC on, and you’ll typically see a fairly warm sound not out of kilter with a speaker. We’re not sure we’d venture out to call these headphones best in class, but warmth often doesn’t exist in headphones for below $300, giving the JBL Tune 760NC something to gloat about, ever so slightly, anyway.

That’s more than we can say about the noise cancellation, which is very, very basic.

It’s not as if active noise cancellation is a new technology, and so it’s not a total surprise to see it pop up in a pair of $200 headphones, but it’s also a barebones implementation. With no app support in the Tune 760NC, there’s no way of customising the type of cancellation, while the buttons just give you ANC on and ANC off, dealing with the outside in rather simplistic ways. 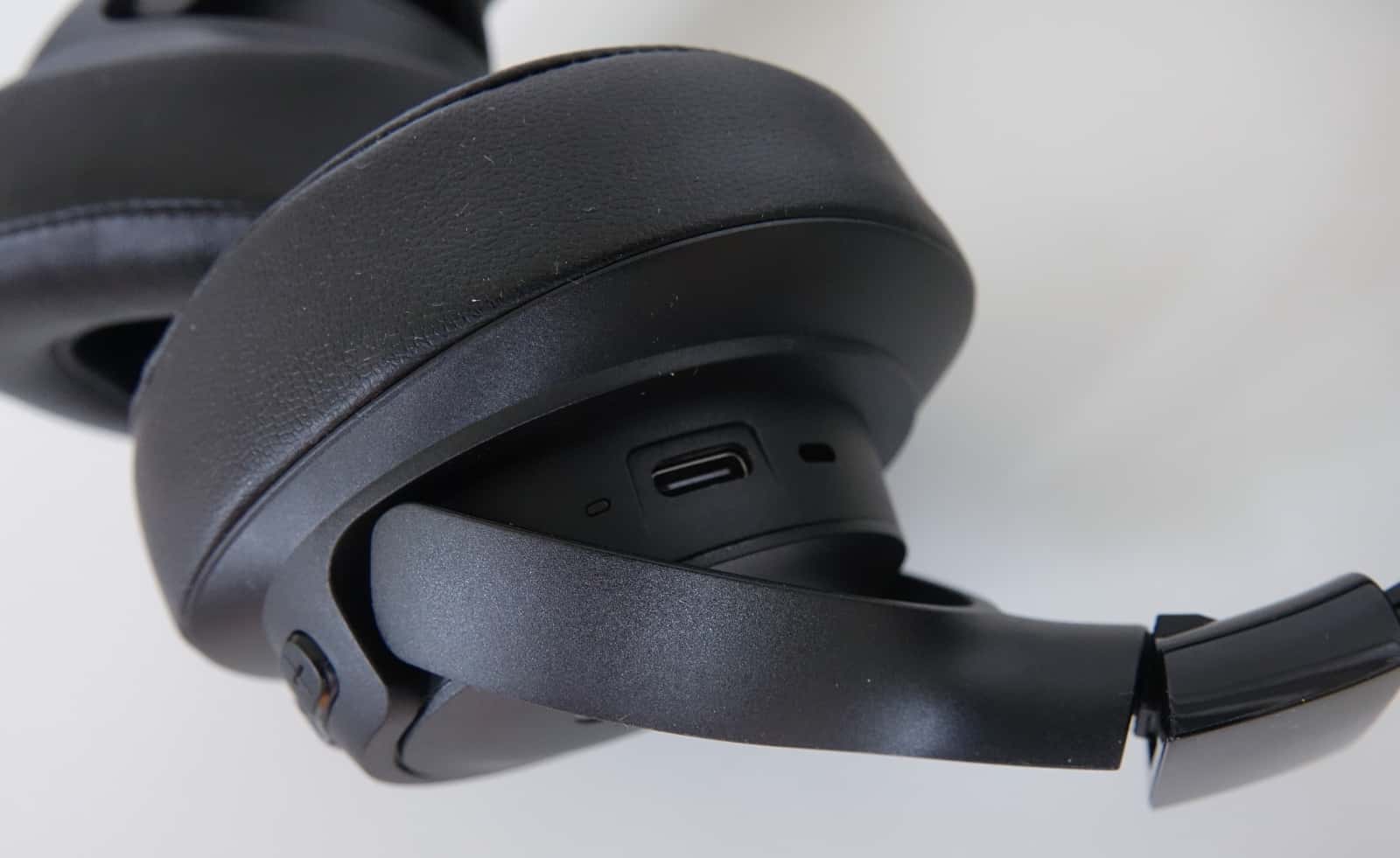 Even though the noise cancellation is a touch basic, it’s very difficult to stop using ANC once you’ve heard it. That bubble of isolation is so tempting, and once you realise you can block much of the world out, leaving you only to your own thoughts and tunes, you’ll feel obliged to sit there.

Here in the JBL Tune 760NC, you can sit in that bubble of isolation for an admirable 35 hours before needing to plug in the Type C cable to recharge, which can only be done while you’re not wearing them. JBL stuck the USB connector on the top of the right pad, and it’s only accessible when not in use due to the hinge design.

You can apparently get an extra 15 hours out of these headphones if you forgo the noise cancellation, resulting in as much as 50 hours of battery life, though it’s hard to leave that bubble of isolated sound, for sure.

And for $199, that bubble of sound isn’t badly priced, delivering warmth and volume in a design that’s comfortable, as well.

We’re fans of the slightly larger pads JBL has gone with here, and while they’re not necessarily as large or spacious as the pads on the Sony WH-1000XM4 or the Apple AirPods Max, they’re comfortable all the same. The sound is quite good, too, giving folks a good feeling on the price they’re paying. 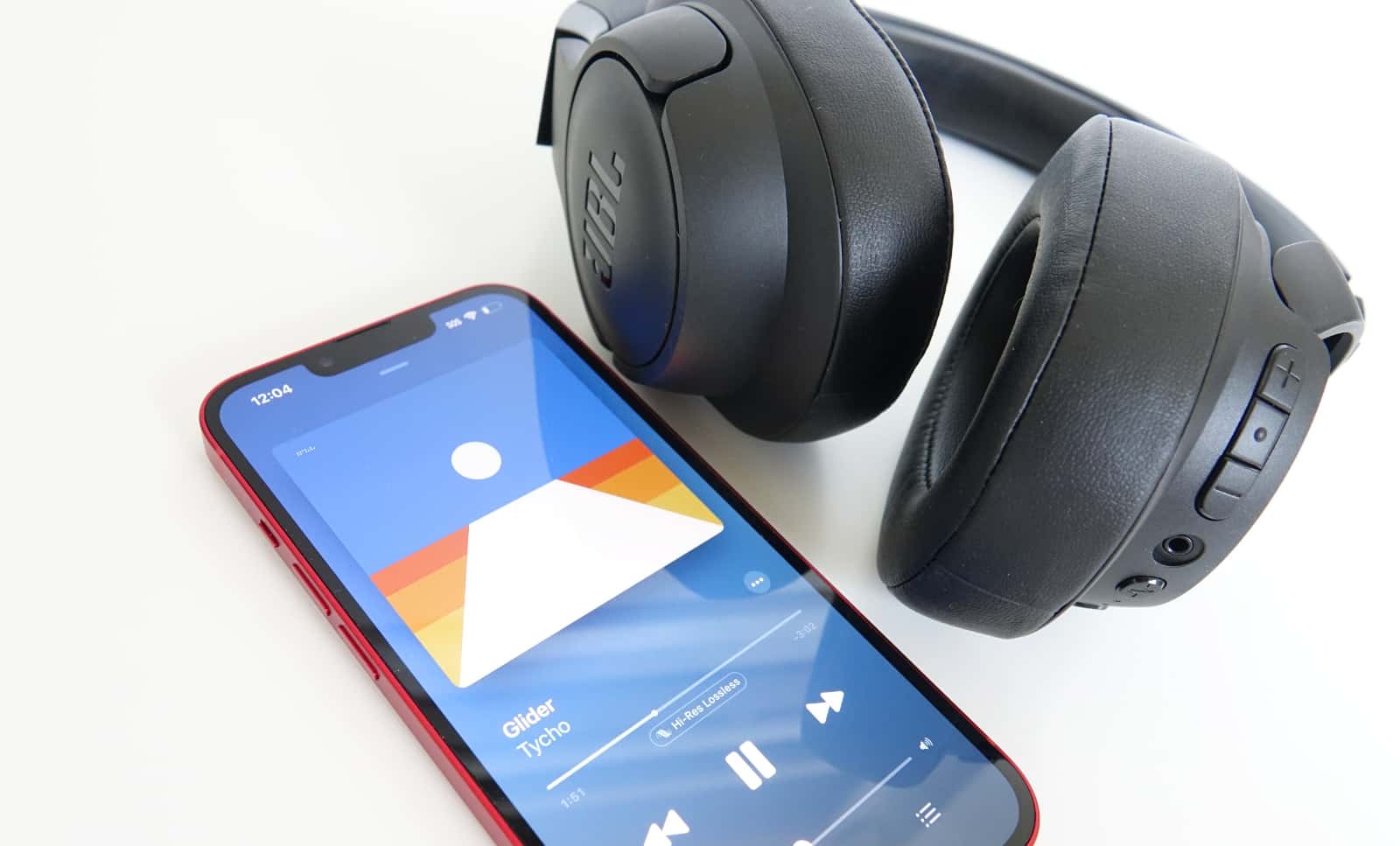 What you won’t find here is an ambient mode, one of the expected extras that often goes hand-in-hand with noise cancellation modes, simply because it means the headphone maker simply has to turn the mics on to let you hear the outside world as you listen to your music. It’s even on earphones that don’t have noise cancellation, likely because the feature is in demand just that much.

Yet it’s missing in action on the JBL Tune 760NC, with the only way to hear through the headphones being a little old school and pulling them down. That’s not quite the same.

You also won’t find any app support for the Tune 760NC, with this pair refusing to register with the JBL app, meaning there’s no way to customise them. These headphones are what they are, with no extra app control, no equaliser settings, and no changes to the buttons. It’s about as barebones as it gets: you get buttons on your headphones, but nothing else. You don’t even get a travel case.

And heaven forbid if you plan on listening to Dolby Atmos through these headphones, because while it technically works, we found the spatial audio technology threw the mix completely out of kilter when listening on them. It’s an example of where the headphones just won’t do well, so maybe leave it switched off if you use Apple Music.

JBL does give you the ability to plug a cable into the 760NC, handy if you want to plug into an old school device, or maybe the arm-rest or screen when your flying, but the catch here is it’s not a standard 3.5mm to 3.5mm plug, but the less common 2.5mm to 3.5mm option. Granted, these aren’t as rare as they once were, but it’s still surprising to see JBL push something that isn’t quite a standard when 3.5mm on each end is easily the preferred choice. 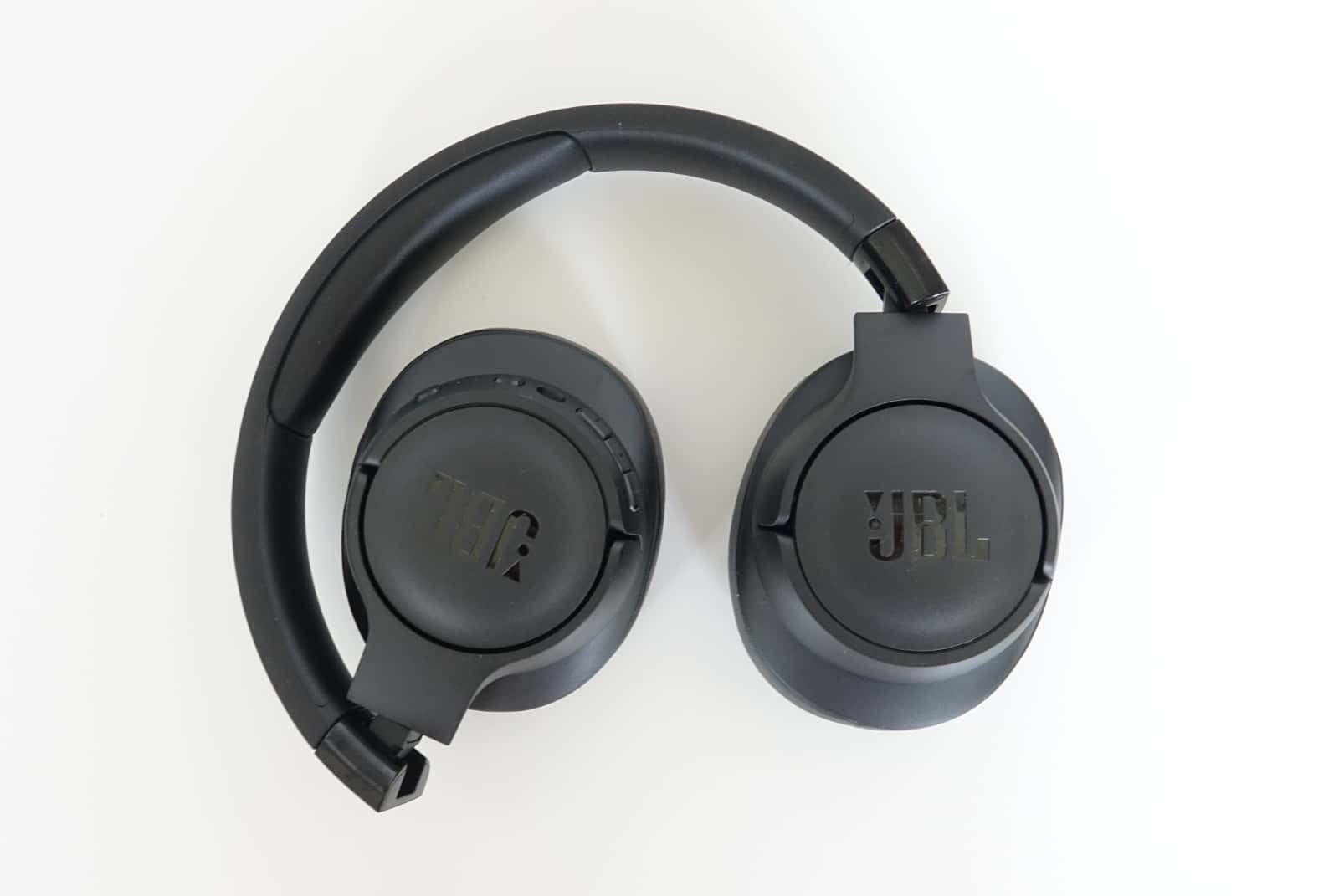 When it all comes down to it, JBL’s Tune 760NC is a bit of a mixed bag. On the one hand, you get a pair of headphones that’s comfortable to wear and sounds great a good 90 percent of the time. And yet on the other, they can feel so barebones that you’re wondering why JBL didn’t do more.

For $200, we found ourselves asking why these headphones lacked the niceties of others, such as the lack of an app, the omission of a case, and improvements to the design that could have been just that much more useful overall.

It’s worth noting that despite these issues, the JBL Tune 760NC are still good headphones, but that they also aren’t the best they could have been, and can feel more like a variation on a theme. Two years ago we reviewed the JBL Tune 600BTNC, a pair of on-ear headphones with much the same focus on design, and two years on, nothing has changed, even if the market clearly has.

That may not be a bad thing, but it does mean JBL can feel kind of stuck, and while the market is moving on to having all of those extra features, this pair misses out. You can find them in other JBL models, mind you, but for some reason, not this mid-range option.

If you don’t mind missing out on the niceties of headphone design, there’s a good pair of noise cancelling headphones to be found in the JBL Tune 760NC, but you can do better if you only look around. Alternatively, consider waiting for these headphones to fall in price when they’d become better value for what they offer all-round. 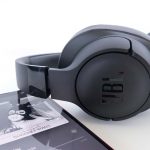 JBL Tune 760NC
Design
Features
Performance
Ease of use
Battery
Value
The good
Fairly balanced with decent bass
Basic noise cancelling headphones for folks looking for something basic
Includes a wired headphone jack
Comfortable pads that aren't too big
Folds up for portability
The not-so-good
Noise cancellation is very basic
Cable is a 2.5mm to 3.5mm connector
No ambient mode
Dolby Atmos support is there, but it doesn't work well
No app connection to tweak anything
No case
3.7