Apple AirTag reviewed: a great addition to the family

Small and simple, the lightweight Apple AirTag mightn’t break too much new ground, but it makes tracking easy, and that’s awesome.

We’ve all lost something before and regretted it, and technology has never really come through. An earphone, a pair of keys, your wallet, a bag, the car, maybe even your dignity.

Technology can’t help with the last one, but it might have an answer for just about every other one, and it comes in the form of tracking technology. A little bit sci-fi, this is specifically a type of tech meant to — as the name suggests — track things.

There are a few ways to do this, and movies paint a specific picture of how, often with a GPS planted to a car that someone can look for. But this is all whimsy, because real tracking doesn’t sport a GPS, not these days anyway.

Rather, it uses people, or their phones they carry. That’s the process Apple has adopted for its gadgets that run on the Find My network, which basically allows you to track an iPhone, iPad, MacBook, or pair of AirPods or AirPods Pro — any Apple device in your account, really — by bouncing signals in an encrypted network between iPhones to keep an active position on devices people own. It happens in the background and you won’t realise it, but the idea is Apple can help you find your Apple devices.

And with the launch of the Apple AirTag, that can extend to more than just devices made by Apple, but anything you can clip an AirTag to.

What is the Apple AirTag? 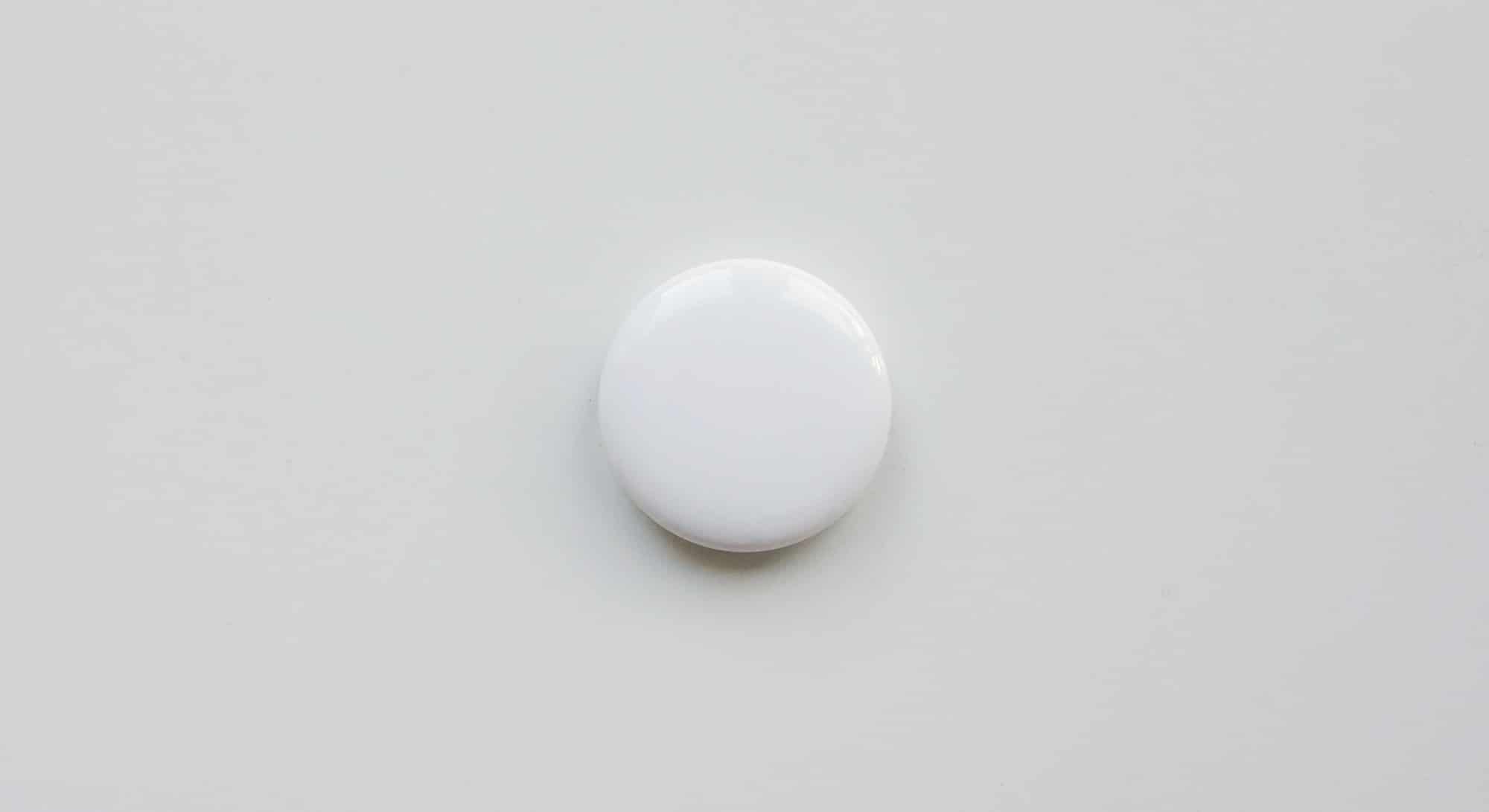 About the size of a large button on a jacket or an Australian 50 cent coin, the Apple AirTag is a fairly small tracker that runs off a small replaceable CR2032 battery, lasting up to a year and providing a signal over Bluetooth and ultra-wideband radio, while also support Near-Field Communication (NFC). There’s even a speaker inside, though you’d never realise it, as it forms part of the white shell.

In short and without the jargon, the Apple AirTag is a little gadget that talks to nearby iPhones to find out where it is, and then sends you that location.

It’s not the first concept like it, mind you. Tile has had one for years, while other brands have developed similar ideas. Telstra has one, as does Samsung, and there are others out there.

Each tracker typically relies on the same concept, but needs an app to make that connection. For instance, for Tile to work, it needs people to run the app in the background, which means for the Tile to work, it’s entirely reliant on people who have Tile activated and running.

Apple’s AirTag doesn’t quite have that issue. Rather, it relies on owners of iPhones, using an army of iPhones with the GPS location enabled, which we’d gather most people with an iPhone have, whether they realise it or not. It’s this approach that helps make the AirTag easy, which extends to setup and use, which is largely a “set and forget” approach. 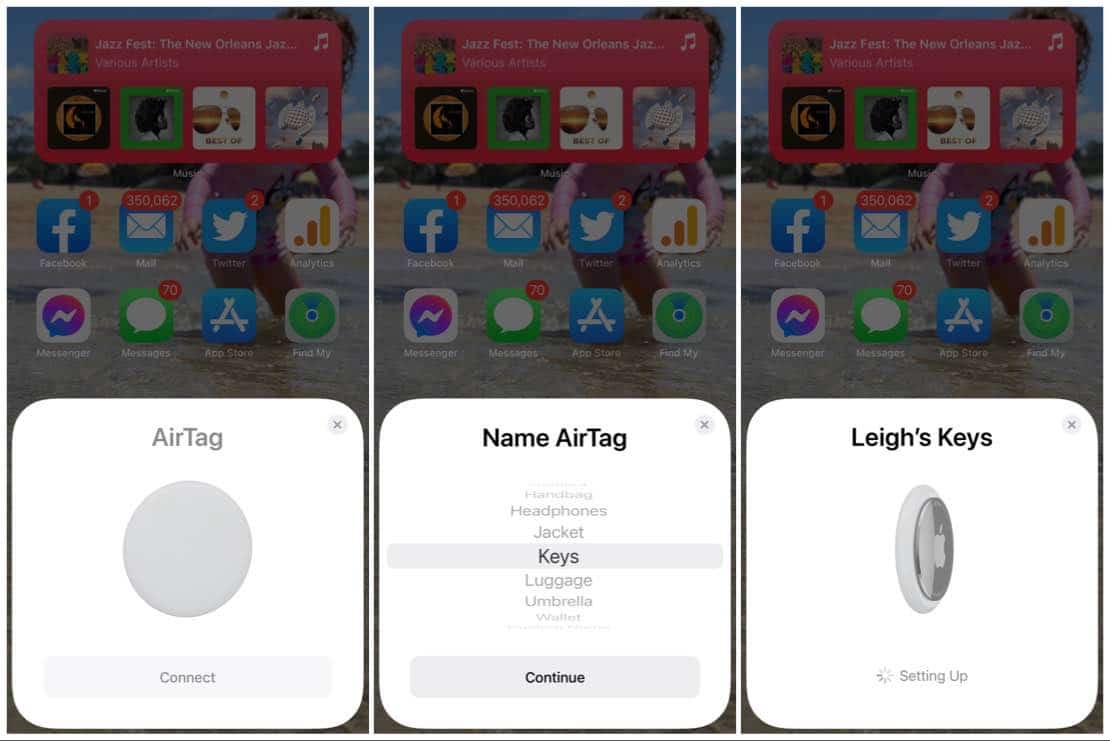 Activate the AirTag through its simple setup, and you’ll name it based on what you’re using it for, which is pretty much the only setup requirement. You’ll need an iPhone, iPad, or even an iPod Touch to set up the AirTag, the latter of which surprised us, but we’ve tested and works. Simply hold it near one of those devices, and you’ll run through a quick install, and then it’s done.

The AirTag is about as easy as easy gets. You don’t need a manual for this, even if you might want an accessory.

The AirTag doesn’t come with any keyring holes or ways to mount it, and more or less expects you to use something to hold it in place, though they will work without. Leave it at the bottom of your luggage and an AirTag will work the same way as if it was clinging to the side of your luggage, and the same is true if you left it in your car. 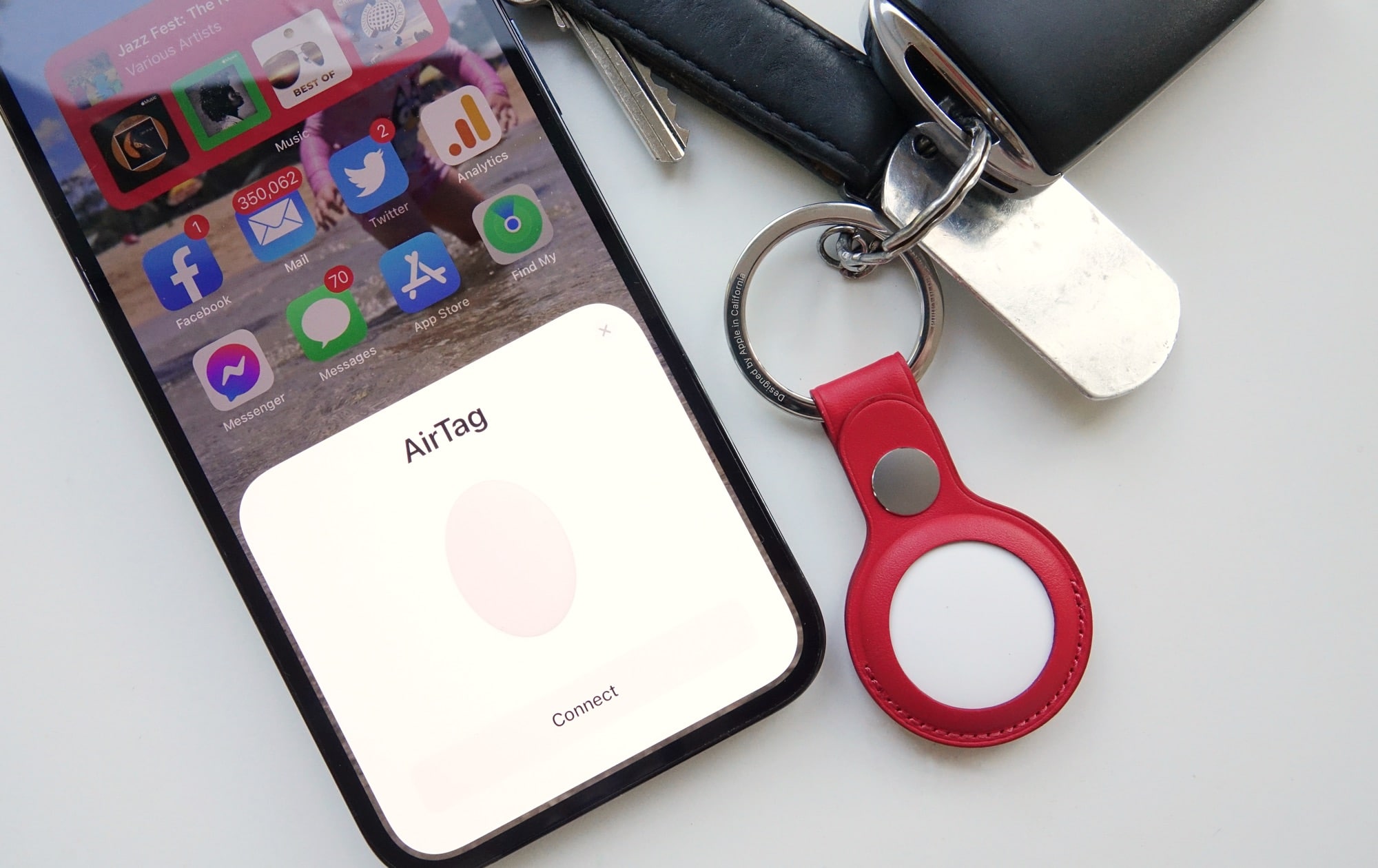 However you choose to attach an AirTag — maybe a keychain to hold it to a dog’s collar like a standard tag — the moment you activate it, the AirTag becomes a way to track something.

It’s really as simple as that: pair it with an iDevice, and it becomes a part of your account, making it possible to track that thing in the side of the Find My app labelled “Items”. That name will appear in the list, and you’ll be able to find where it last was, the directions to where it was last found, and even trigger a sound on it.

Apple’s AirTag isn’t just about finding it from a large map, but getting close to something, as well. If you can’t find something and you know it’s nearby — which the map will help with — owners of an iPhone 11 or iPhone 12 model phone can use the ultra-wideband technology to help find the AirTag in their immediate vicinity.

It’s super helpful if you lose something like your keys or even your car, because it turns your iPhone into a sort of personal GPS, giving you directions on where to go to find it once again. If you leave an AirTag in your car and can’t find it in a car park, an iPhone 11 or higher acts as personal GPS to finding it. 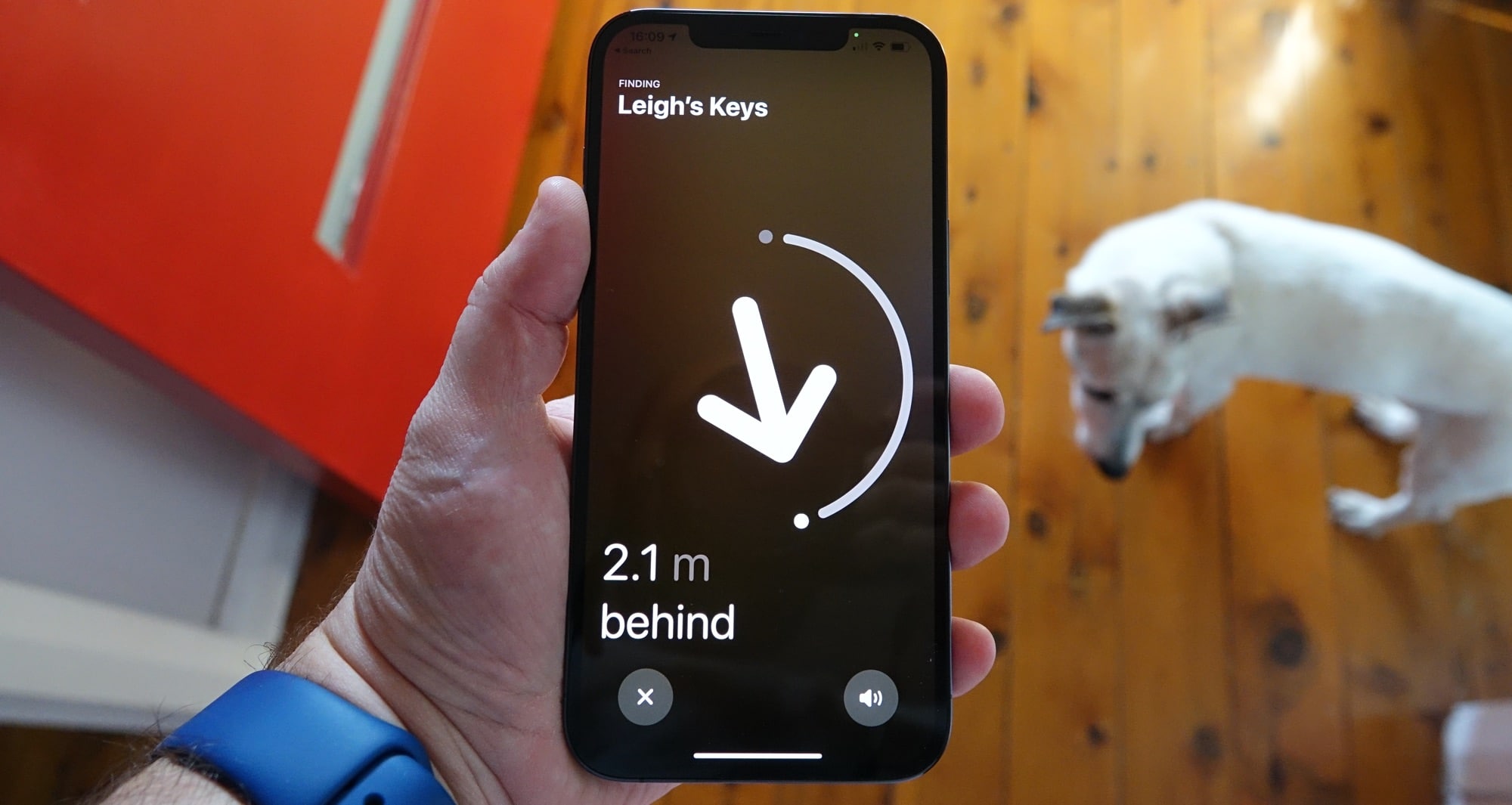 You can throw an AirTag into “Lost Mode”, as well, and if someone bumps their phone next to the unobtrusive white dot that it is, the onboard NFC will load up your phone number and a message suggesting the person who found it get in contact to return it. That’s kind of like a return policy, provided your lost item is found by nice people.

The NFC bumping feature works with Android and iOS alike, provided they have NFC on-board, which not every Android will. Still, it’s nice Apple considered Android users in one regard. 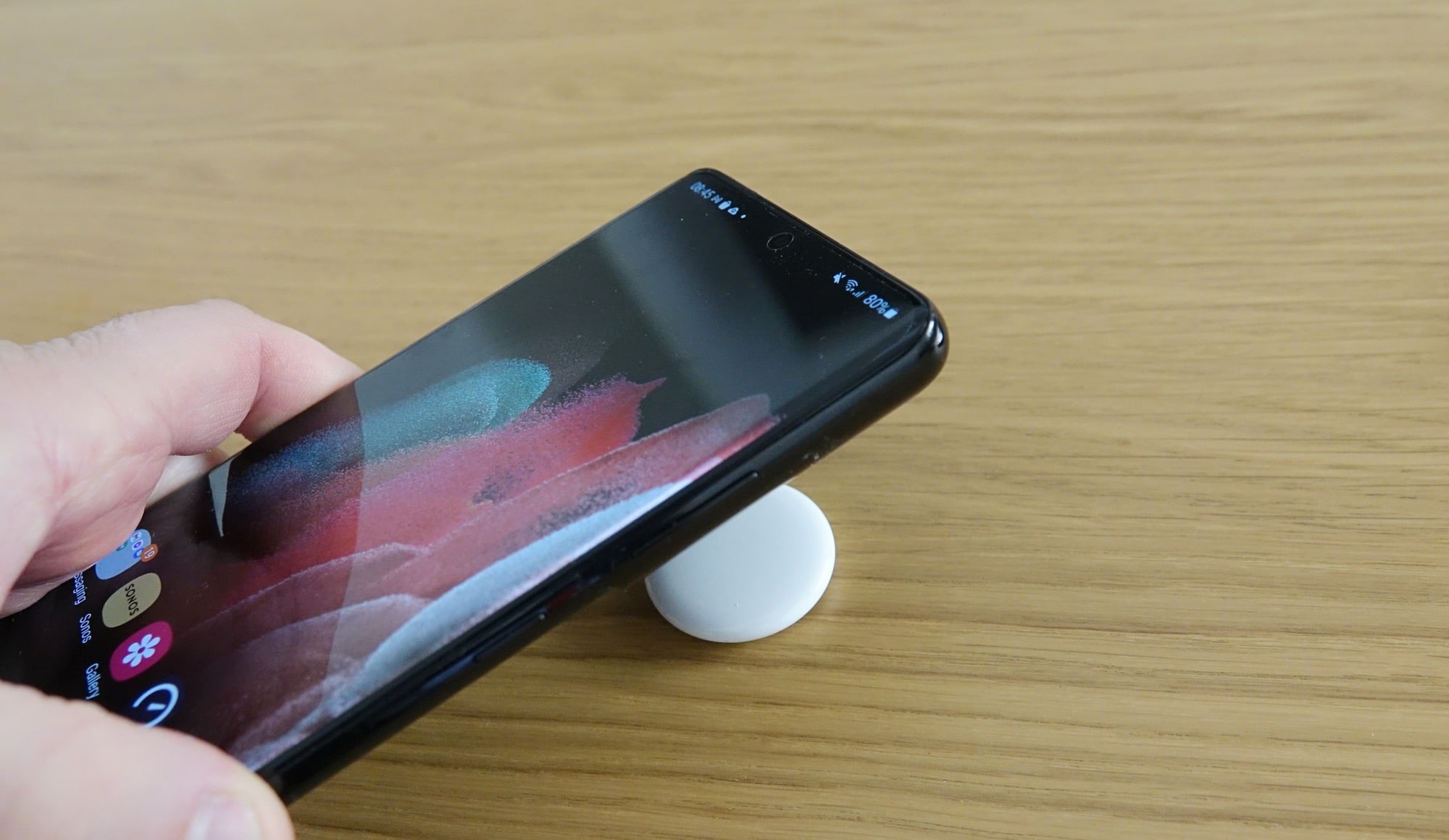 What does the AirTag need?

But it didn’t entirely, because while an Android owner can bump with an AirTag and find out who owns it (and presumably what it’s connected to), it doesn’t allow Android users to set up an AirTag, or even track things with the Find My app. In fact, there is no Find My app on Android, so there’s no chance of Android owners directly tracking these tags on an app.

Android support would be nice, and would add to the features of the AirTag, but so would family sharing, because the Apple AirTag is unlike pretty much every part of the Apple account.

Even though you can see other devices under an Apple family account, items tagged with an AirTag are just for one, and rather frustratingly so. It means you can’t yet share them with a family member, so if you want to keep track of something shared — say a pet or a car — only one person can track that one thing at a time, lest you use two AirTags to do so.

That’s a feature we’d love Apple to amend ASAP, as it would mean families could keep tabs on shared things easily, rather than need to throw to in the one place.

Is the AirTag worth your money? 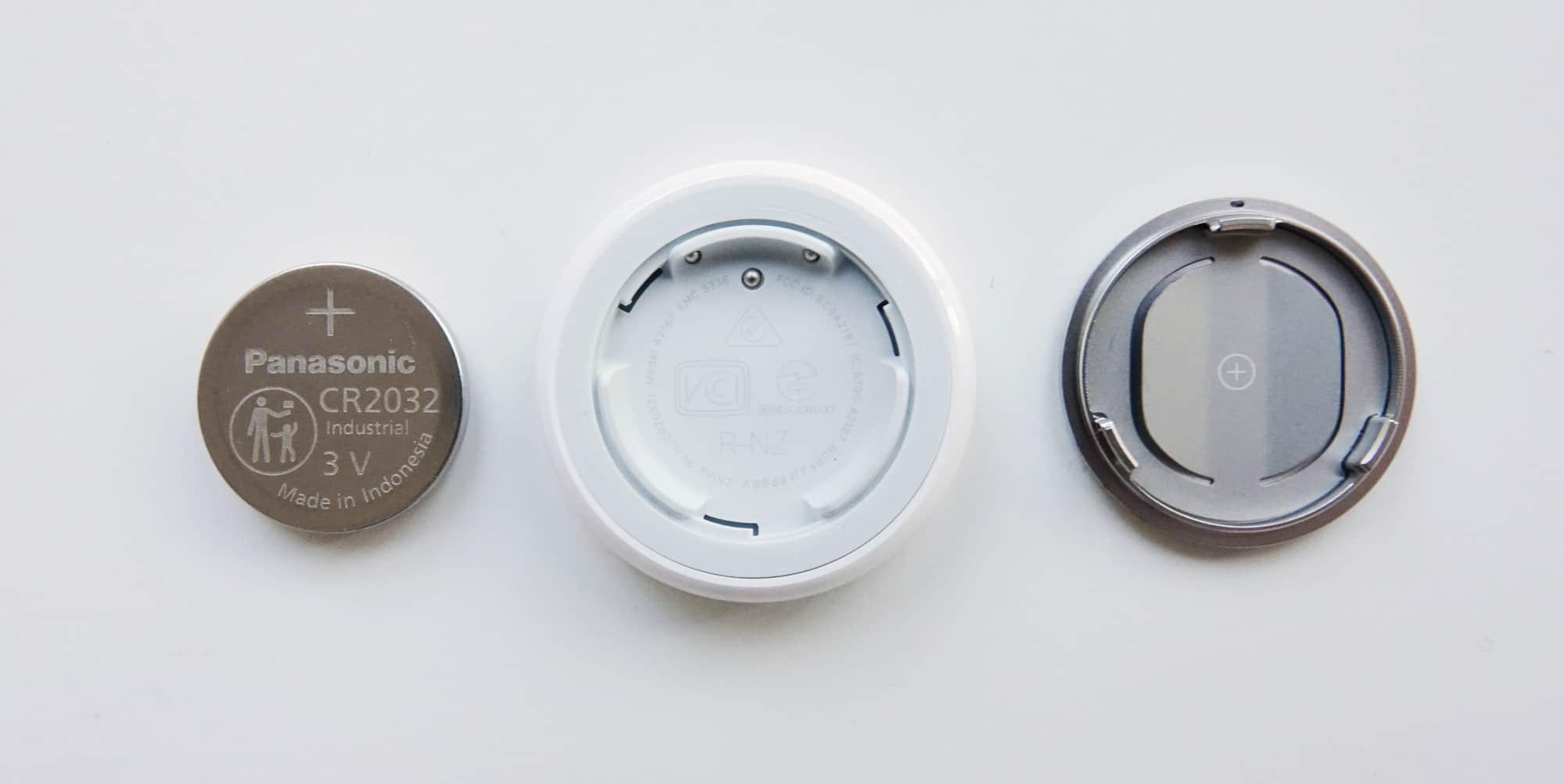 At a little under $50, Apple makes the case for trackers quite clearly because of just how easy the AirTag is to use. Selling in Australia at $45 for one or $149 for four, it’s not overly expensive to try out, even if the accessories can get expensive quickly.

While Belkin offers a cheap and cheerful keyring holder for around the $20 mark, Apple’s start at $45 for a polyurethane loop to hold it in place, with $55 getting you a leather key ring holder or $59 for a leather loop.

You don’t need the accessory, mind you, and we threw an AirTag straight into the glove compartment of a car with no fuss, but it would have been nice to have a hole on the AirTag to make it a key ring without needing to spend a little extra.

Despite that little niggle, the AirTag is an easy win for people who live in an Apple world and want eyes on parts of their world not connected to Apple. Luggage, pets, cars, keys, and anything else you can cling something to or leave a little tracker inside, the AirTag is compatible with nearly everything. Everything except Android.

We’re not surprised how polished the AirTag is for a first release, this is Apple, after all. But the AirTag is an easy win for iPhone owners keen to keep track of bits and bobs. Simply put, it’s a great addition to the family. Highly recommended. 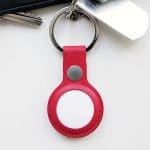 Apple AirTag
The good
Shockingly easy to connect and link to your account
Built well
Harnesses the power of all the people using iPhones
Replaceable battery (CR2032)
Up to a year of battery life
Ultra-wideband tracking is a really cool addition
Can be found by any device that supports NFC, including Android phones
The not-so-good
Can't be set up or monitored directly by an Android app
You need an iDevice to pair it
AirTags can't be shared in a family unit
4.5