Smartwatches tend to be all about screen and sensor, but the Withings ScanWatch throws a bit of old school design and new school tech. And it works.

I haven’t needed to charge the smartwatch I’m reviewing, the Withings ScanWatch, for nearly two weeks. That’s amazing. And it might just be one of the best smart watches around because it’s something different: diagnosing your health.

While all smartwatches handle this in some form or another, the ScanWatch feels like it’s about that entirely. Well, almost entirely. It’s also a pretty solid watch, too. Is it worthy of your wrist? 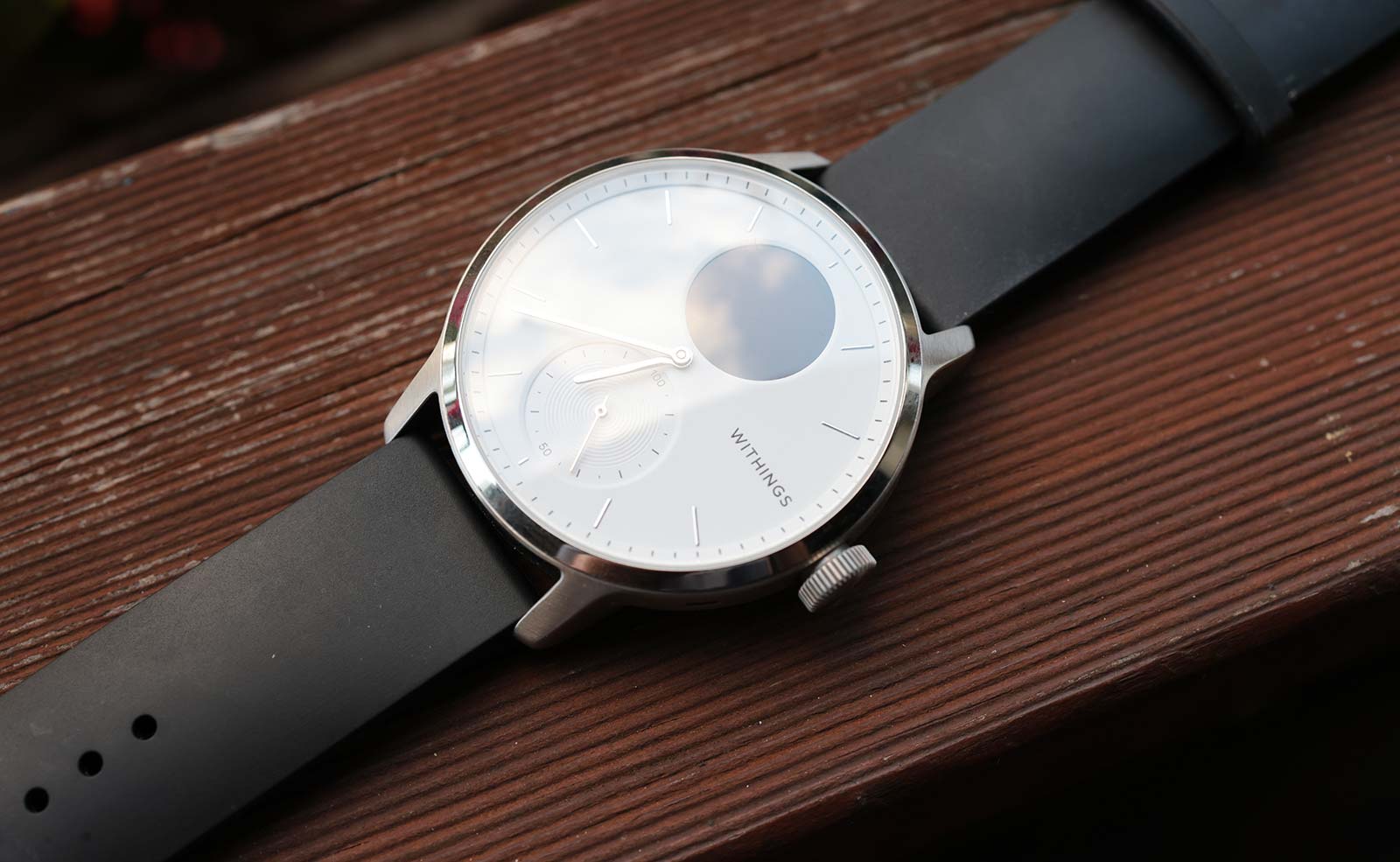 Smartwatches tend to offer a screen with customisable watch faces, but the Withings ScanWatch is something different. Rather than your standard screen-based smartwatch, this is a “hybrid smartwatch”, because it has an analogue clock face and a small screen on the inside, basically giving you one watch face — the obvious one — with a small circular screen to show the time and other stats.

It’s about as simple as it gets, and looks more like a watch than most other smartwatches, because it is a regular watch, complete with sapphire glass covering the watch face and water resistance for the watch entirely. Granted, this reviewer’s wife thinks it looks a touch feminine — perhaps we should have gone for the black model — but it’s liked all the same, and thanks to it supporting a standard strap, we can change the included plastic fluoroelastomer band with something more refined if need be.

The side even sports a crown like a standard watch, this controlling the tiny circular screen on the inside, flicking between settings and a modest amount of screens, so you can quickly check your step count, heart rate, and trigger some of the features that are a little more extensive than your standard watch. 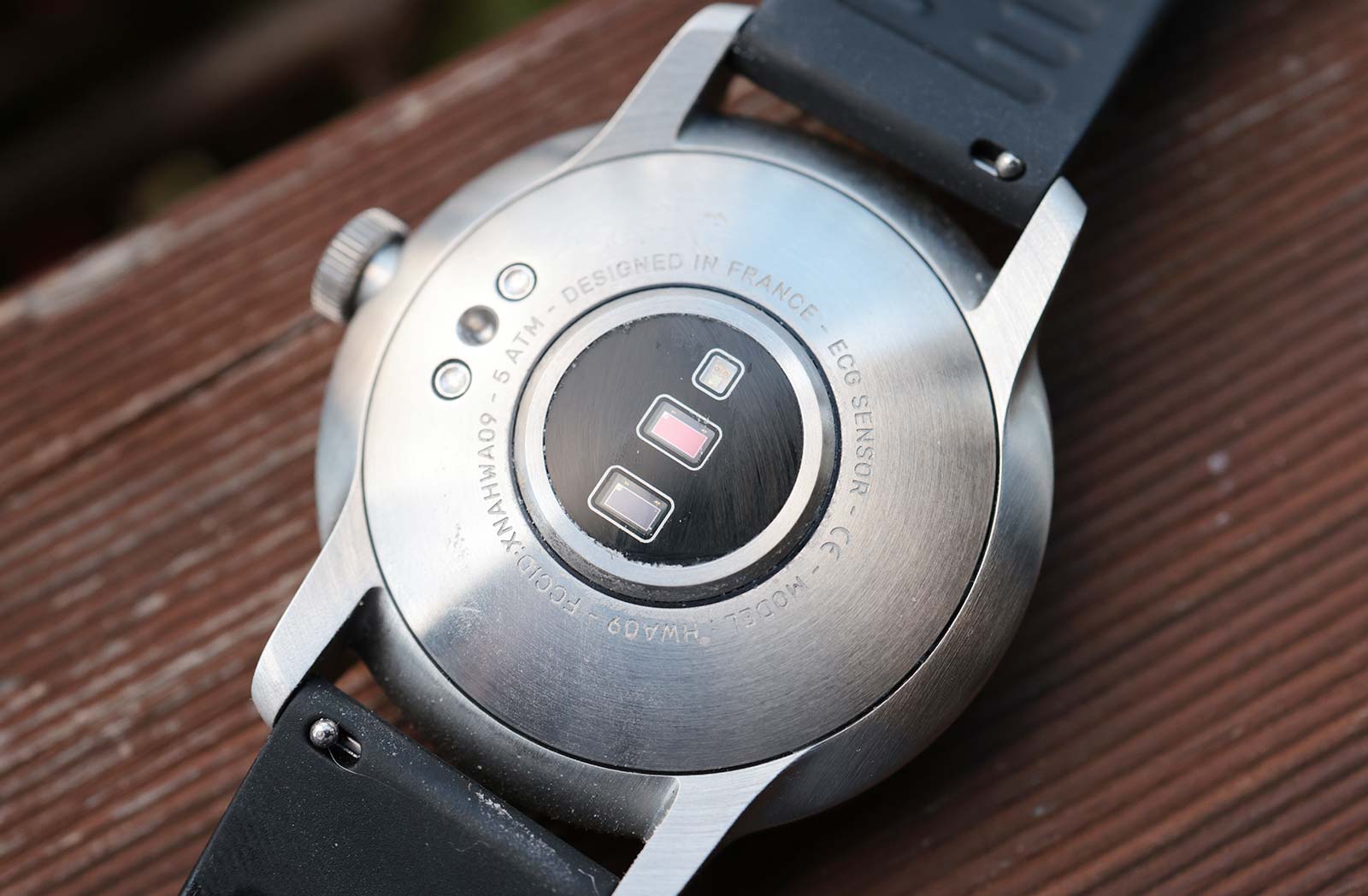 Those features are part of what make the Withings ScanWatch very different from your regular wristwatch, sporting technology on the back to monitor heart rate, to check your blood oxygen (SpO2), and to even send a little electrical charge throughout your body that you can’t feel to monitor your heart-beat, a technology known as an “ECG” or electrocardiogram. None of these are particularly new features for a smartwatch in 2020, but the ECG is touted as working in Australia, which is a big deal given Australia’s government body, the Therapeutic Goods Administration (TGA), hasn’t approved any of them to work in Australia.

But this one has: the Withings ScanWatch has clearance to use its ECG in Australia, and that alone makes it special. Not even Fitbit managed that with its recent “Sense” smartwatch. 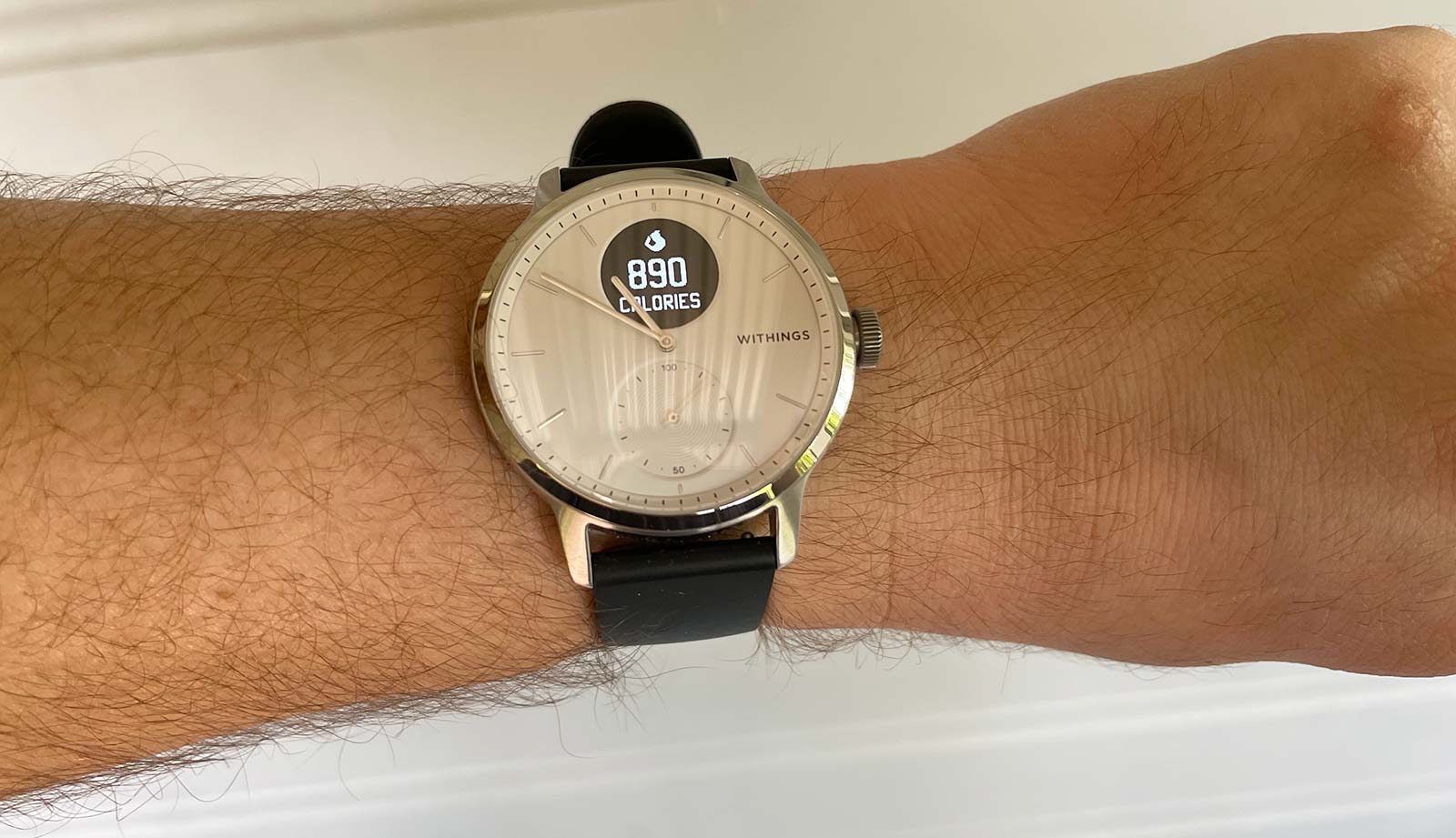 Triggering the ECG on the ScanWatch isn’t hard, though it’s a little more involved than other parts of the watch. While Withings largely lets the heart rate tracking, step count, distance tabulation, and altimeter do their things automatically, two features need a hand in being used. Literally, even.

Using the ScanWatch in general is pretty easy, and you’ll find you just need to rotate the digital crown on the side until you get to the setting you want, each appearing on the display. Press the crown in when you’ve found what you want to look at, though many of the screens for automatic measurements — step count, for instance — don’t do anything else.

Features such as the ECG and SpO2 blood oxygen tracking lead to another screen, and before working, require you to hold your other hand over the watch to hold the watch down, possibly either to get a closer and more accurate reading or to complete a circuit. Keep doing that for 30 seconds, and the test will be done.

You’ll find a couple of other features that don’t require hand-holding, such as the “Breathe” feature, which gives you a moment to concentrate on your breathing, and the “Workout” feature which ideally lets you track when you’re running about the place, but also wants to work with the app. Both of these can work without needing that other hand, which is required for both the ECG and SpO2 tracking to do their things.

And they’ll do just that, with 30 seconds all that’s needed for tracking your heart beat and blood oxygen, at least in theory. We found virtually no problems with the ECG tracking, and while the information that our heart activity was either “normal” or very occasionally when we were worked up “high”, the app can provide some information, though not as much to diagnose you.

Withings isn’t going to diagnose you officially, and it makes that pretty clear in the app: the results aren’t a form of diagnosis, this is no diagnostic tool. But it can provide some insights on your dashboard to take with you to the doctor, especially if you’re at all concerned.

As for the rest of the watch, we found it does its thing suitably well. Step count seems to be about as accurate as possible, and the middle circle on the watch itself is a little meter to guide when your full amount of steps is finished for the day, starting at zero and gradually ending at 100 before looping through again, ideal if you don’t want to take out your phone to check how you’re doing.

The heart rate was regularly checked, our calories lost were shown, alongside distance and floors and so on. Essentially, everything we might normally use a smartwatch or smartband for could be found on the tiny screen of the Withings ScanWatch, dialling through the list using the Digital Crown. It’s as easy as it gets.

The only flaw with performance we could pick up on is that sometimes the SpO2 blood oxygen sensor doesn’t fire properly. More often than we’d like, following the directions exactly would leave the SpO2 sensor in a position where it was still scanning past the 30 seconds, and would then fire an “incomplete” response. Essentially, it can work, but it might not always, and we’re not sure why. You just basically have to keep trying until it does. 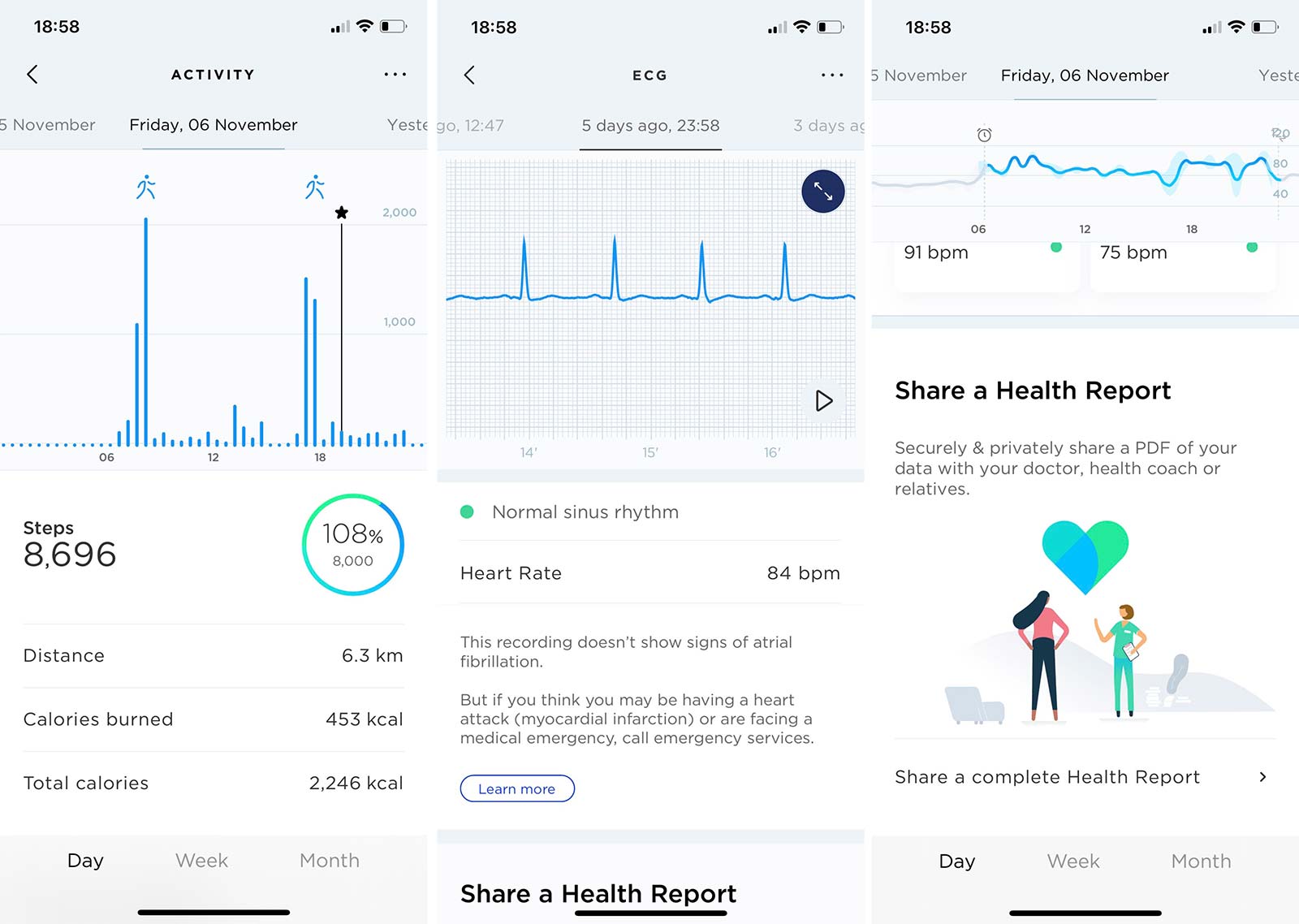 But even if blood oxygen tracking can occasionally miss the mark, battery is one area where it can feel like Withings nails it.

With no big screen and no GPS, the ScanWatch can deliver up to a month’s worth of battery life, though truthfully, you’ll never see that. It’ll be more like two or three weeks, dependent on how often you use features like the ECG or blood oxygen tracking, because these seem to really impact the battery life.

We’ve used the features rather intermittently, a fair bit at first but tapering off after a few days, and found the battery life on the ScanWatch improved when you didn’t lean on those features as heavily. Essentially, if you take at least two scans a day from each, you expect around a week’s battery life, while if you never use the ECG or SpO2 sensor, you might hit that 30 days.

Using these features a little more like we would in life — when we were concerned or interested — we found a battery life of just under two weeks was possible from the Withings ScanWatch, which is pretty solid overall.

You can’t get that from many smartwatches in the market, and certainly not from any of the models with ECG that we’ve tested. 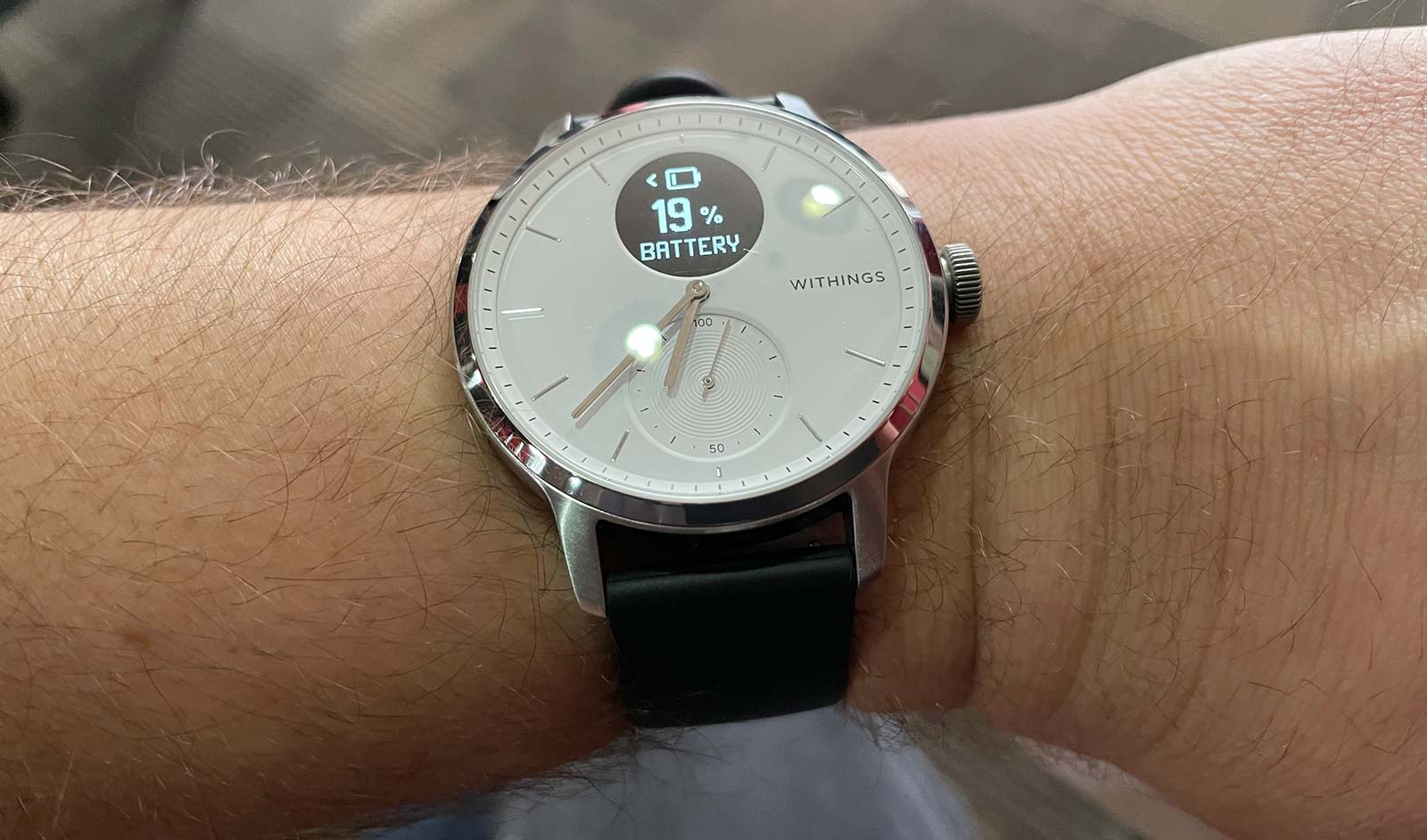 The price also isn’t bad, though needs to be compared to what you’re potentially getting from other brands.

In Australia, the two models range from a small 38mm model for $479 and a large 42mm model for $499, the latter of which we tested. The casing appears to be a little different between each, and there’s a choice of either a white or black face, depending on what you like most, but outside of that, they appear to be pretty close.

Locally, the $500 mark isn’t what you’d call an inexpensive price for a smartwatch, fetching around the same price as other high-end competitors, but delivering some differences. For that price, you get sapphire glass and some very similar features, though miss out on a couple you might not care about.

We think the value is pretty strong overall, though would like to have seen a choice of bands in the box, or even something a little nicer than the simple one you get.

But beyond the lack of bands, you might be wondering what the ScanWatch needs. After all, the genuine achievement of having an ECG working in Australia should put it at the top of its class, especially as every other wearable maker has missed out locally.

Well, it’s not quite the same watch as what either Apple or Samsung, or even Fitbit delivers, and that means it may miss out on features some folks may yearn for. Features such as GPS and payment support, neither of which are in the Withings ScanWatch. Features like a watch face you can change and a watch you can talk to with a microphone and speaker are also missing in action here, too.

Frankly, the benefits of the Withings ScanWatch and the focus on health kinda make these exclusions negligible in the grand scheme of things. This is a very different smartwatch, and that’s good. It’s one focused on health, and honestly, if you’re a little annoyed about this watch missing out on them, well, you still have a phone, and it does all of that, too. 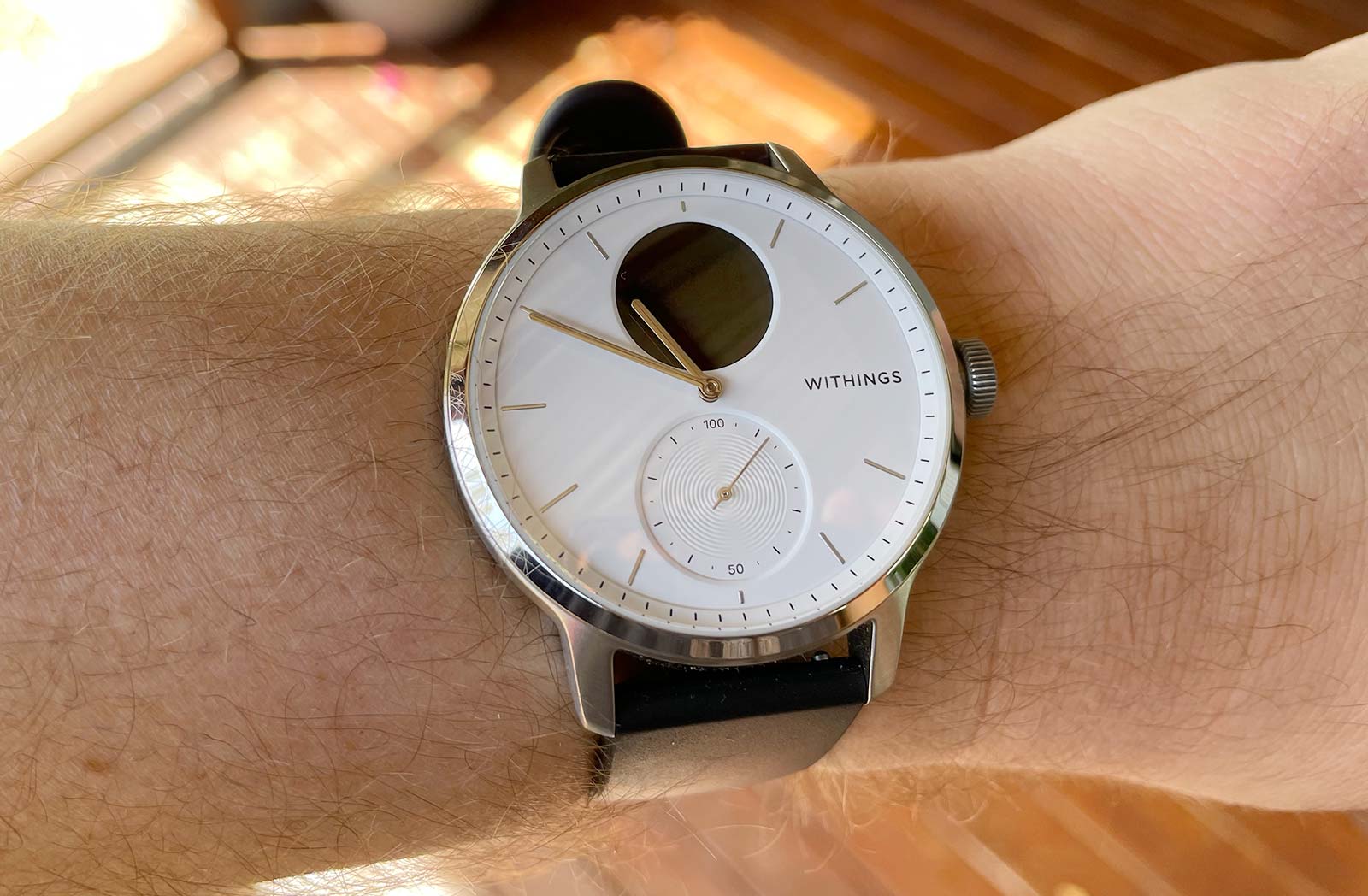 The point of this watch is that it is about health, plain and simple.

If what you’re after is mostly a watch that watches over your health, the ScanWatch makes sense. Highly recommended. 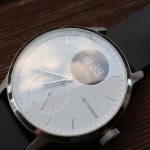 Withings ScanWatch
Design
Features
Performance
Ease of use
Battery
Value
The good
Looks like a real watch
Feels like a real watch
Easy to use
The ECG actually works in Australia (!)
Insights seems genuinely helpful
Battery life ranges from a solid week to a marvellous month
The not-so-good
SpO2 check can sometimes fail
No on-board GPS
No payment platform support
No way to talk to the watch like a phone
4.5 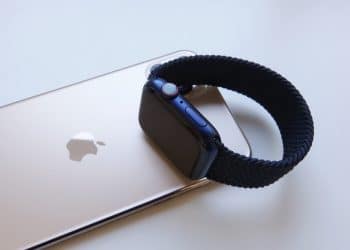 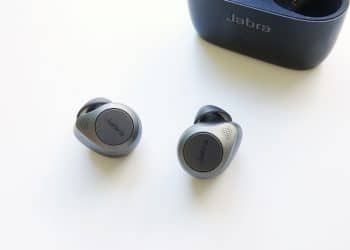