A pair of earphones has to be special to stand out these days, and for the LG ToneFree, the focus is on being clean. Is that enough?

It’s not easy to make a pair of earphones that stands out against a tide of others that look just like it. These days, people know what a pair of wireless and cordless earphones are, but they typically regard them as either a clone of Apple’s AirPods, or something a little smaller and more like a dot in your ears.

To compete with what Apple makes, earphone makers have to stand out by delivering something else. It might be better sound, better value, or an extra feature you’ve not thought about yet. Maybe low latency connections for gaming with earphones.

We’ll bet that one feature you’ve not thought about, however, was just how clean your earphones could be. Specifically the removal of bacteria, something some people might care about, especially in 2020.

In fact, after a year that has largely kept everyone at home thanks to the nature of a global pandemic, we wouldn’t be altogether surprised if the idea of bacteria wasn’t something you didn’t want to deal with. Bacteria isn’t a virus, mind you, but it may elicit the same feelings.

That might be why LG’s Tone Free FN6 earphones could be so interesting. Looking a little like an LG interpretation of the Apple AirPods, they attempt to stand out not because they’re made by someone other than Apple, but because they promise to clean your earphones using the power of ultraviolet light, a technology LG calls “UV Nano”. Is that enough to make the LG ToneFree worthy of your ears, or will we need more than clean to make a pair of earphones truly worthwhile? 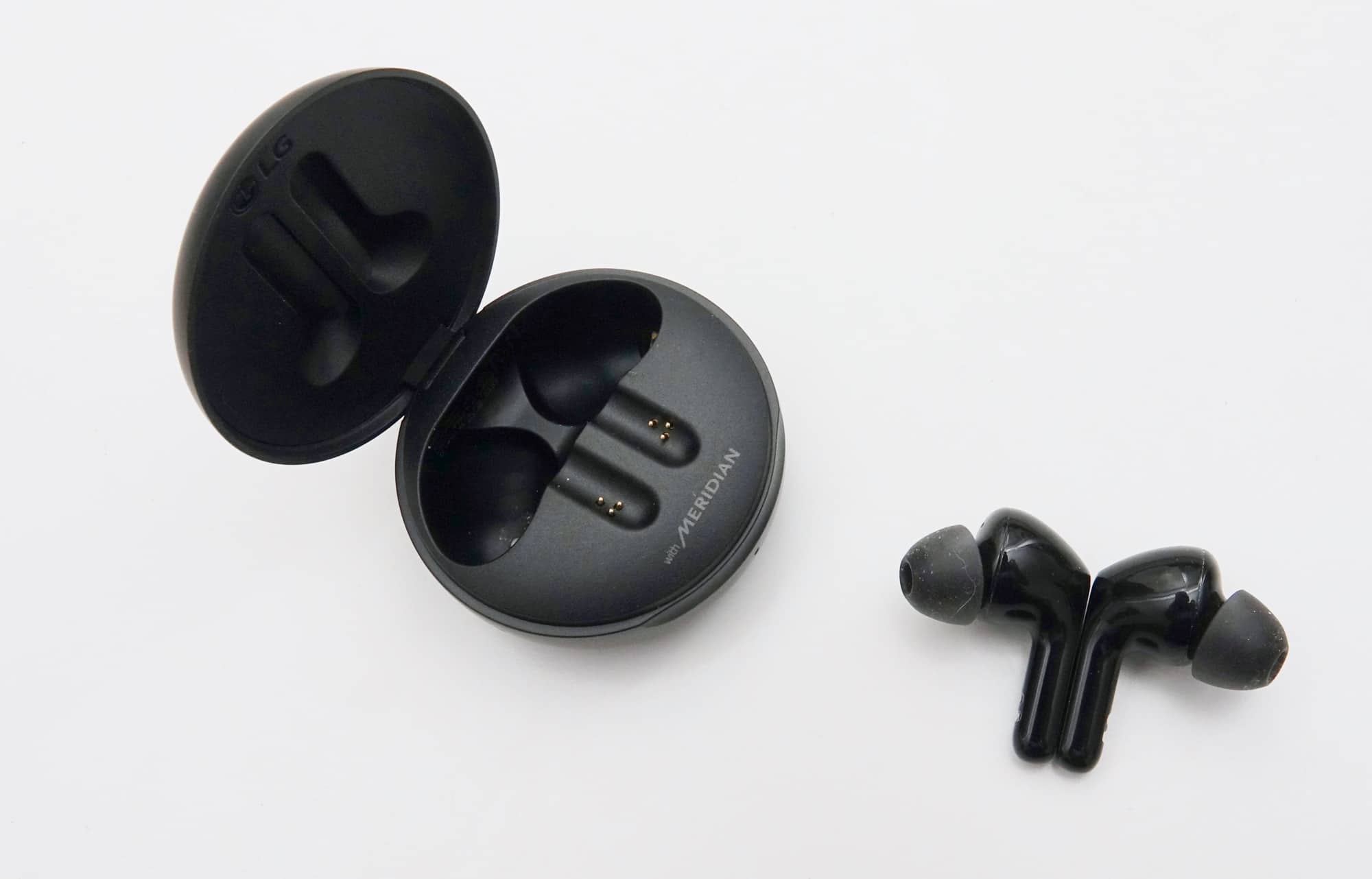 First things first, there’s design, and that’s where LG’s Tone Free can look a little what happens when an AirPod marries an earphone, delivering an earbud-style device with a silicone tip.

It’s a pretty basic look, but one that’s not altogether uncomfortable, with LG providing a few variations of tips in the box, and whichever one matches your ears best delivering a somewhat comfy experience, even if the stalks are quite small all the same.

They arrive in a very small circular case that is very pocketable, something earphones don’t always see, which itself can be charged wirelessly, handy if you’re someone who typically relies on wireless charging overall.

Take the LG Tone Free FN6 from that small circular case and you’ll have two earphones ready to through into your ears. On the back of the earpieces — basically at the top of the stalks — LG has included a touch panel for you to use, alongside some touch-based controls to work with.

To play and pause, touch either earbud once, while skipping a track means pressing the earbud panel three times. Tapping it twice on either side will do something else entirely, with double taping the left earpiece lowering the volume, while doubling tapping the right increasing it.

It’s not necessarily super straightforward, but it is easy to work out, and if you need help with the ToneFree controls, LG has a manual you can work with. Just give yourself some time, and you should be fine. 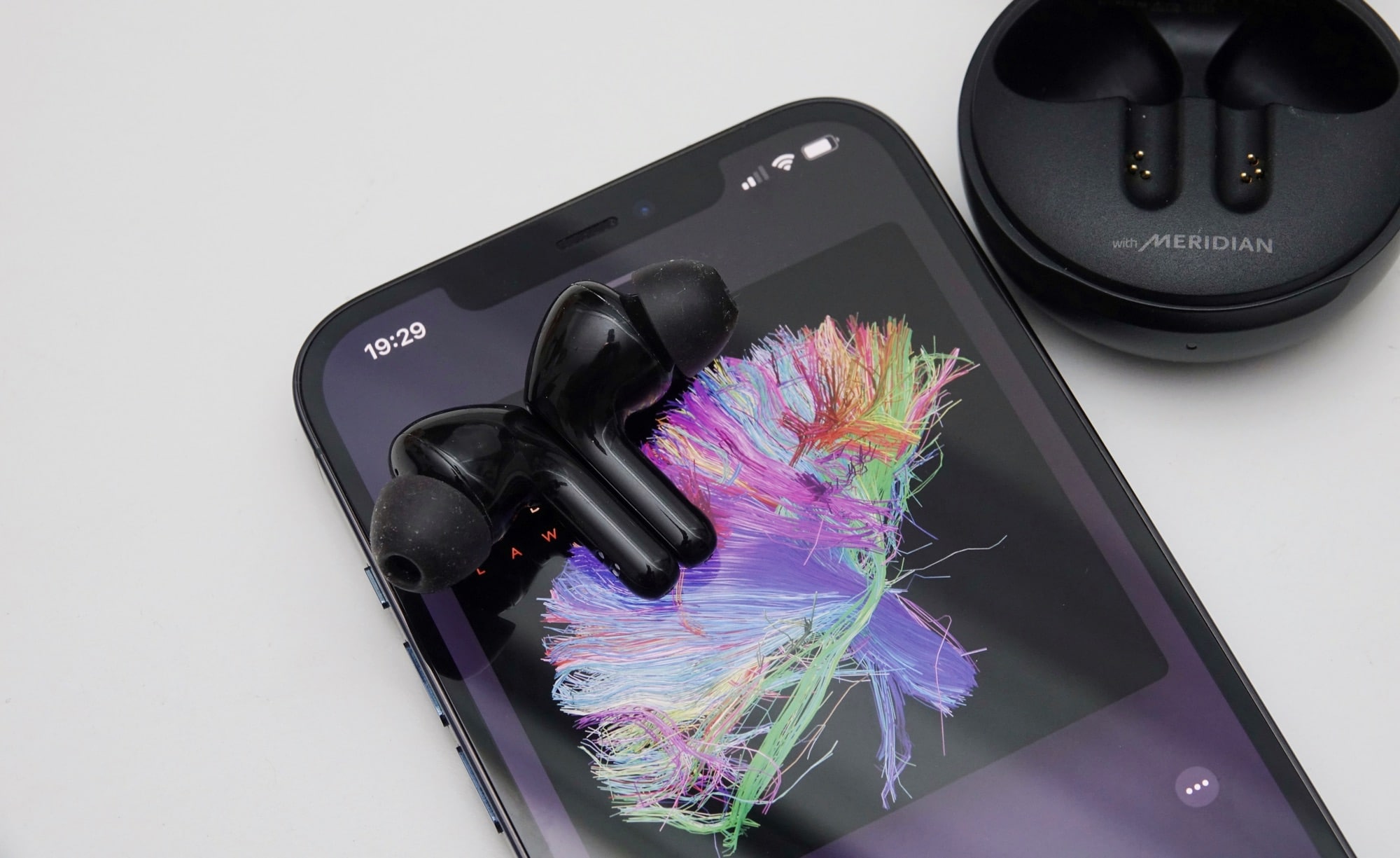 Get used to the controls and you can get stuck into the sound, which is what we did, using the Pickr Sound Test, which you can always try for yourself, too.

And that starts with electronic, with Tycho and and Daft Punk delivering some bass, but more attention in the highs. It’s a nice sound, definitely comfortable, and you may even pick the bass drop, but the overall sound is restrained and lacks dimensionality, feeling shallow.

Over to pop with Carly Rae Jepsen, and it we pick up on a bright and bubbly sound that matches the cover art, while Mark Ronson’s “Uptown Funk” renders without much of the mid-tones, essentially delivering bright sounds with some bass.

After a few tracks, it becomes pretty clear that the highs are where most of the action is here, a common trait in less expensive earphones, though we’re not quite sure if LG’s would qualify for that. However Charlie Puth’s “Done For Me” keeps that going, despite the obvious bass that song normally presents: instead of being able to feel the punchy bass, you’re barely just listening to it, going along with it like a friend unsure of where the next turn will lead you. Typically, we see a little more return from the guttural bass in FKA Twigs’ “Two Weeks”, and the bass is here, but the lacks that earth shattering sound, a shame given it’s a prime part of the song. 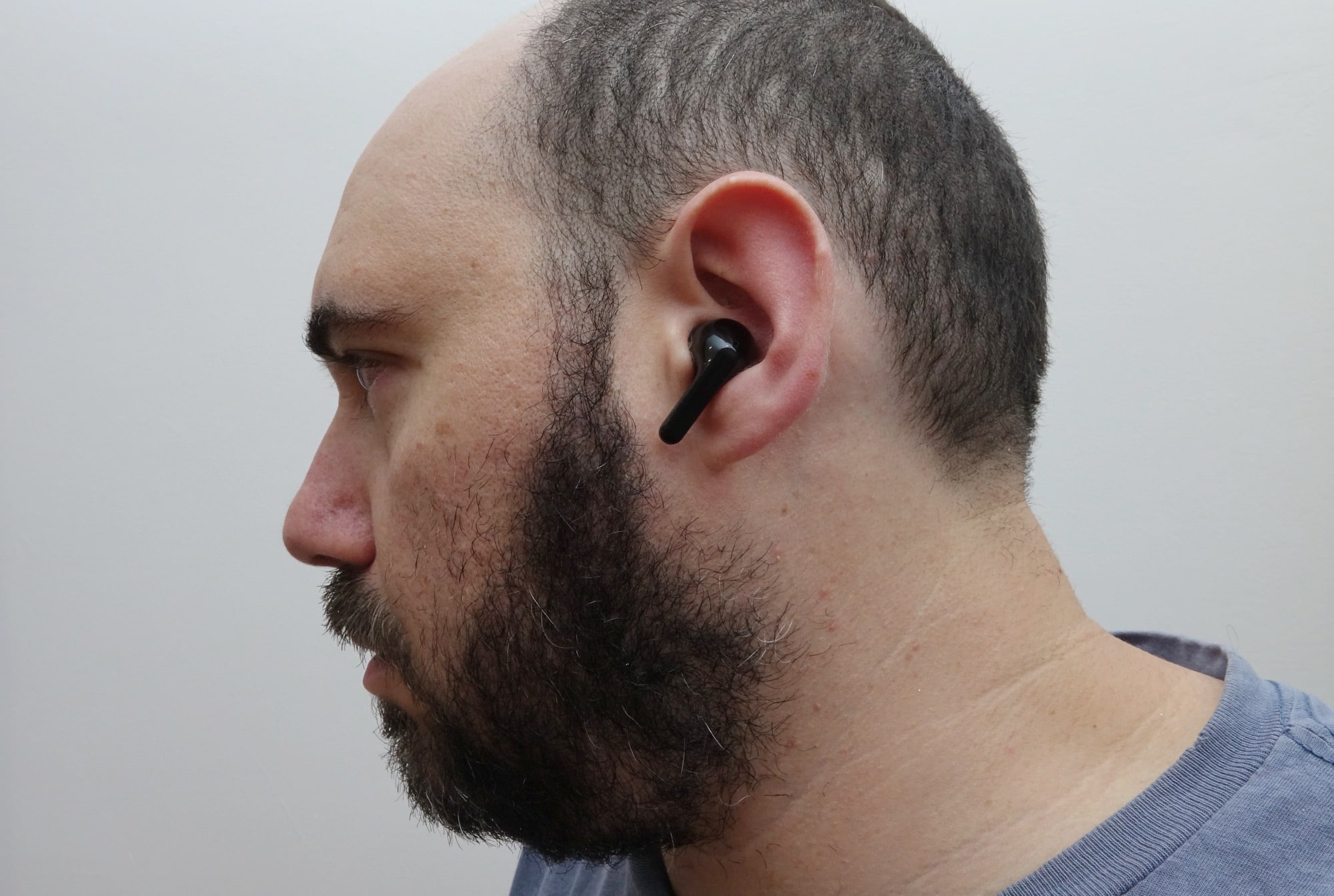 In rock, we’re delivered a similar focus on highs and a lack of balanced tone, as our test tracks with Muse and Rage Against The Machine push out mostly high sounds — guitars and vocals — but the bass lines and bass drums lack the overall delivery heavier rock is expected to deliver. Bring the rock styling back to something softer, David Bowie and Paul Simon are recreated a little more clearly, with Meridian Audio’s focus on details evident in some of these older tracks, something we also could pick up on classical and jazz.

Overall, it’s a bit of a mixed back for the LG ToneFree earphones, delivering a consistently bright performance, but also one that lacks the warmth and punch more balanced earphones can deliver. We’d struggle to call these earphones “balanced”, which is a shame given the heritage Meridian Audio has, the audio company LG typically partners with and has in these earphones. 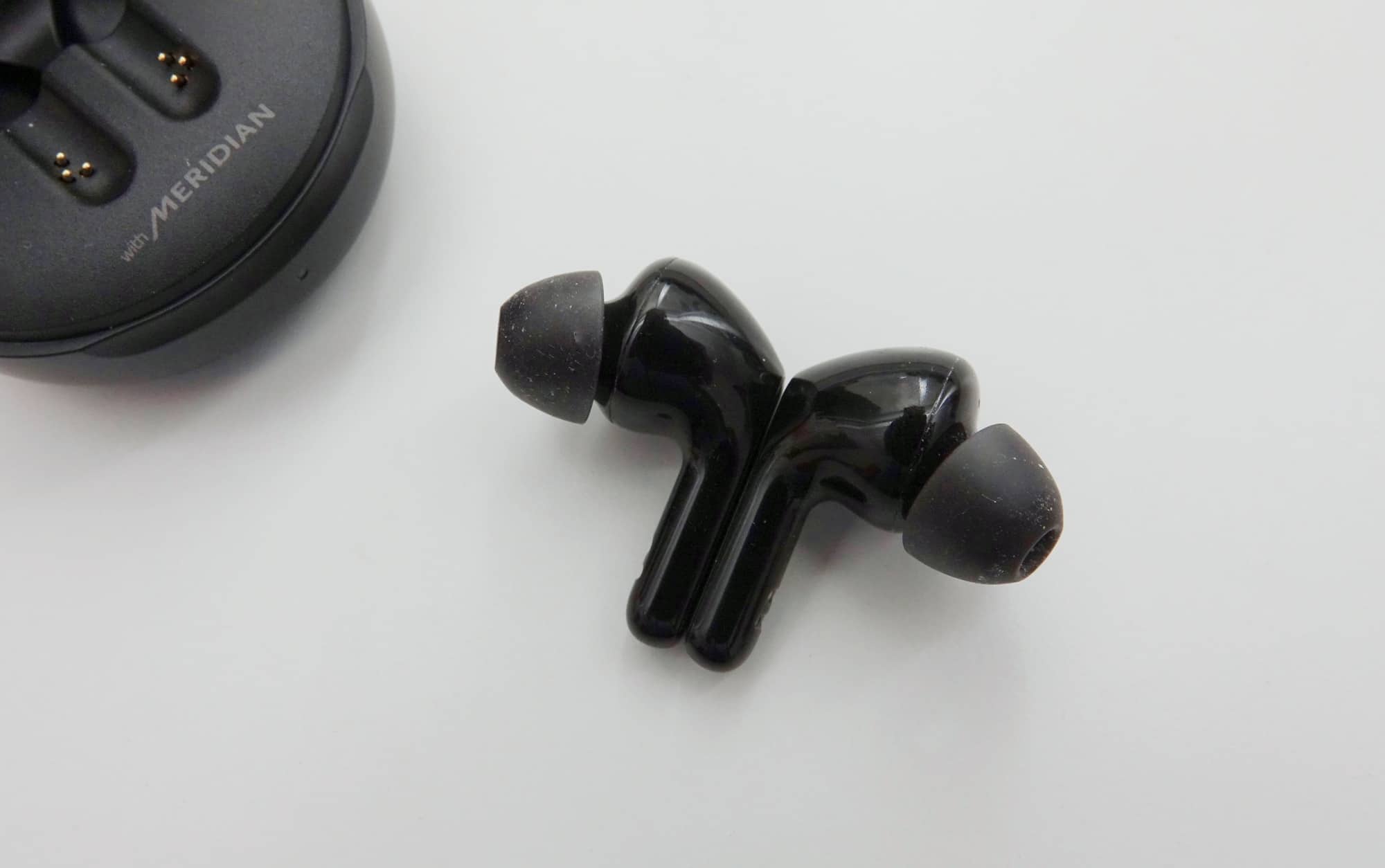 Alongside that performance is a battery that chugs along in runtime, even if the diminutive case is so small, it might need a charge or two throughout the week.

Specifically, the LG Tone Free earphones can achieve around six hours of use before you’ll need to charge them again, with an extra 12 hours in the case itself. That tallies up to 18 hours overall, which isn’t the best we’ve experienced, but delivers an acceptable amount all the same.

The inclusion of a wirelessly charged case can help a bit, as that’s often an extra on truly wireless earphones.

But while the battery is acceptable, the performance for the price isn’t something we’re totally fond of.

With a recommended retail price of $259 in Australia, the LG Tone Free wireless earphones are priced like the AirPods, but don’t feel like they deliver the same type of balance in Apple’s own take.

They’re priced similarly to Apple’s, but also to that of competitors, competing against models from Jabra and Oppo that both feel like they they’re better deals overall with an element of noise cancellation thrown in, and that’s before you get to the sound. 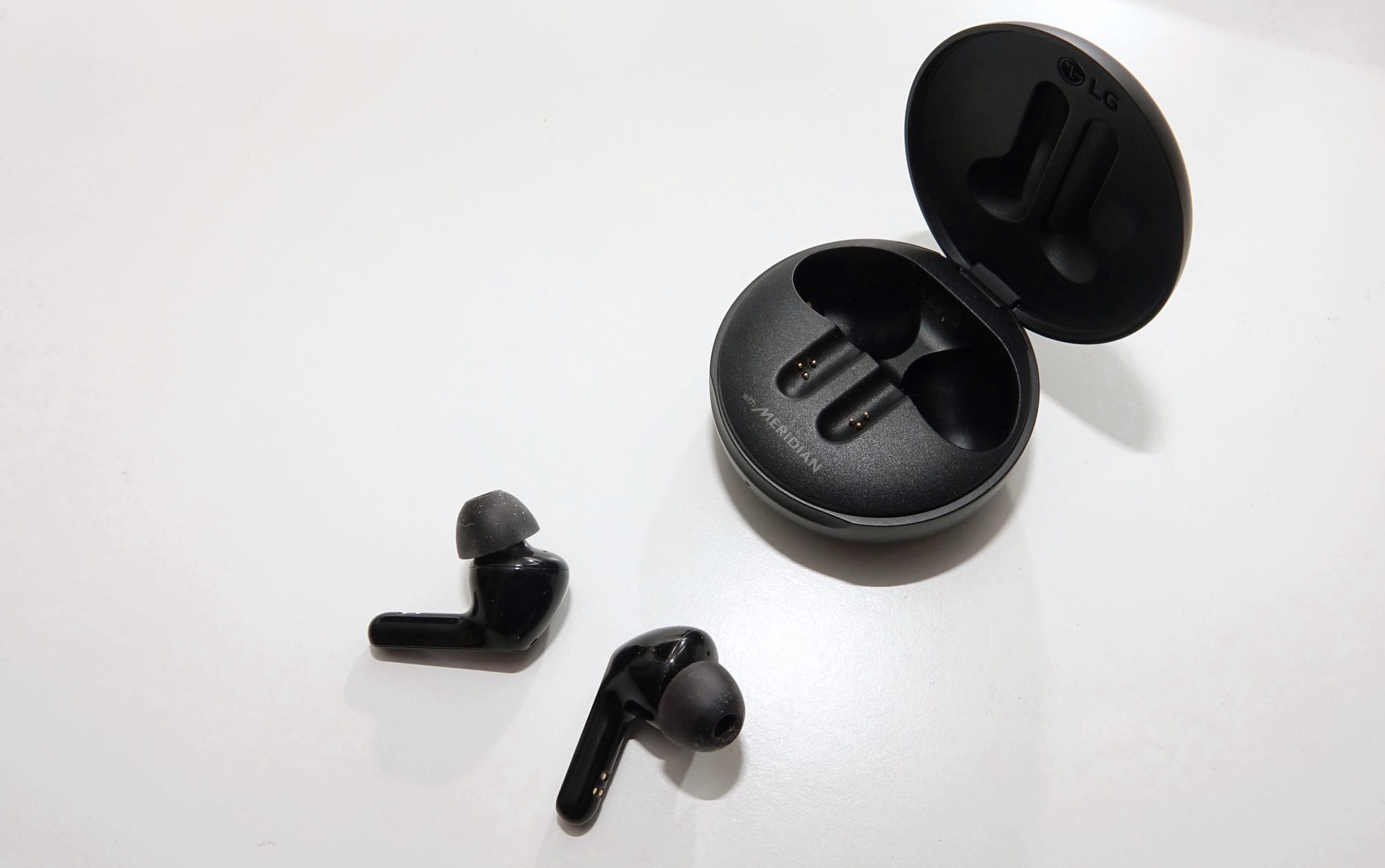 While the LG Tone Free FN6 are definitely a different take on the truly wireless earphone and earbud, they desperately need more, well, tone. It’s in the name, but not necessarily balanced out in real life.

Competing against the obvious choice in the AirPods, Apple’s take offers a fairly balanced delivery of sound, provided you have decent isolation and some peace to listen to your audio. Isolation is a bit of a problem with earbuds, which is what the AirPods are designed with, but LG’s shouldn’t have that problem. They’re earphones with silicone tips, and so automatically provide more isolation using passive noise cancellation from silicone tips. And yet the ToneFree can feel like they lack almost all bass, and just feel structureless.

There’s a definite lack of dimensionality to LG’s cordless earphones, which are small enough and definitely pocket friendly, but lacking in structure to the sound. We’d argue they’re good enough for many, but that easily people could do much better, especially for the price.

The gimmick of an ear-cleaning earphone may end up being the driving factor for these earphones, and even there, it’s really just a gimmick. 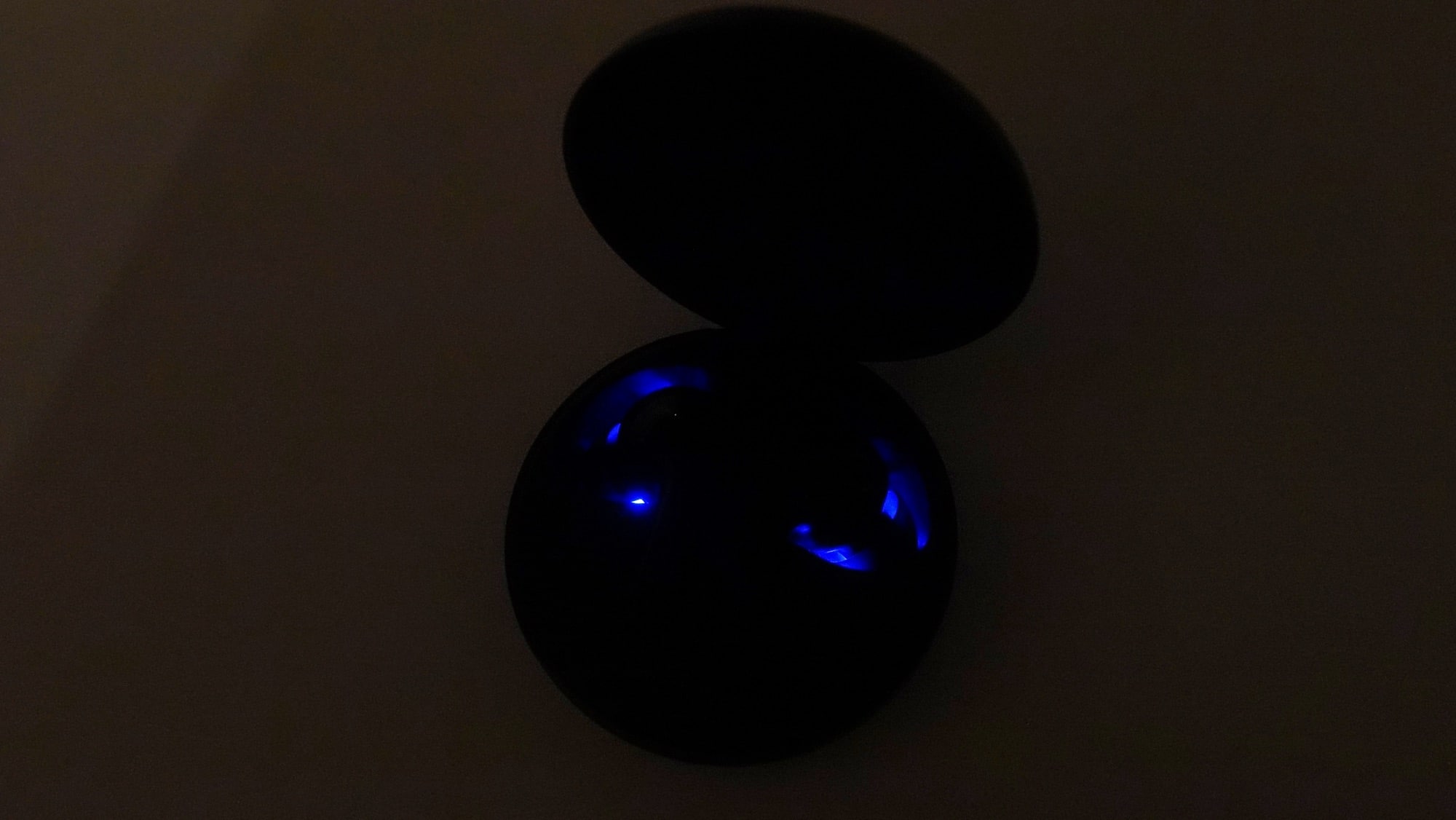 How it works is this: when you leave the LG ToneFree FN6 inside the case to charge for ten minutes, the ultraviolet light will switch on, attempting to clean bacteria under the UV light. LG says its “UVnano” technology can kill 99.9 percent of bacteria, specifically focusing on escherichia coli and staphylococcus aureus, bacteria forms more commonly known as e.coli and golden staph, though what else we’re not entirely sure. UV can make a dent on these, yes, but LG’s take on what constitutes “clean” may differ from your own.

Does the ultraviolet lighting have the potential to clean the earphones? Kind of, cleansing two types of bacteria that we’ve found out about. Will it likely reduce all bacteria on your earphones? Probably not, and it won’t necessarily clean the flakes of human skin or other dirt from your earphones.

In fact, if you’re the only one wearing your earphones — which we hope that you are, for hygiene reasons — the inclusion of ultraviolet lighting for cleansing really just cements that it’s a gimmick, and a gimmick alone. 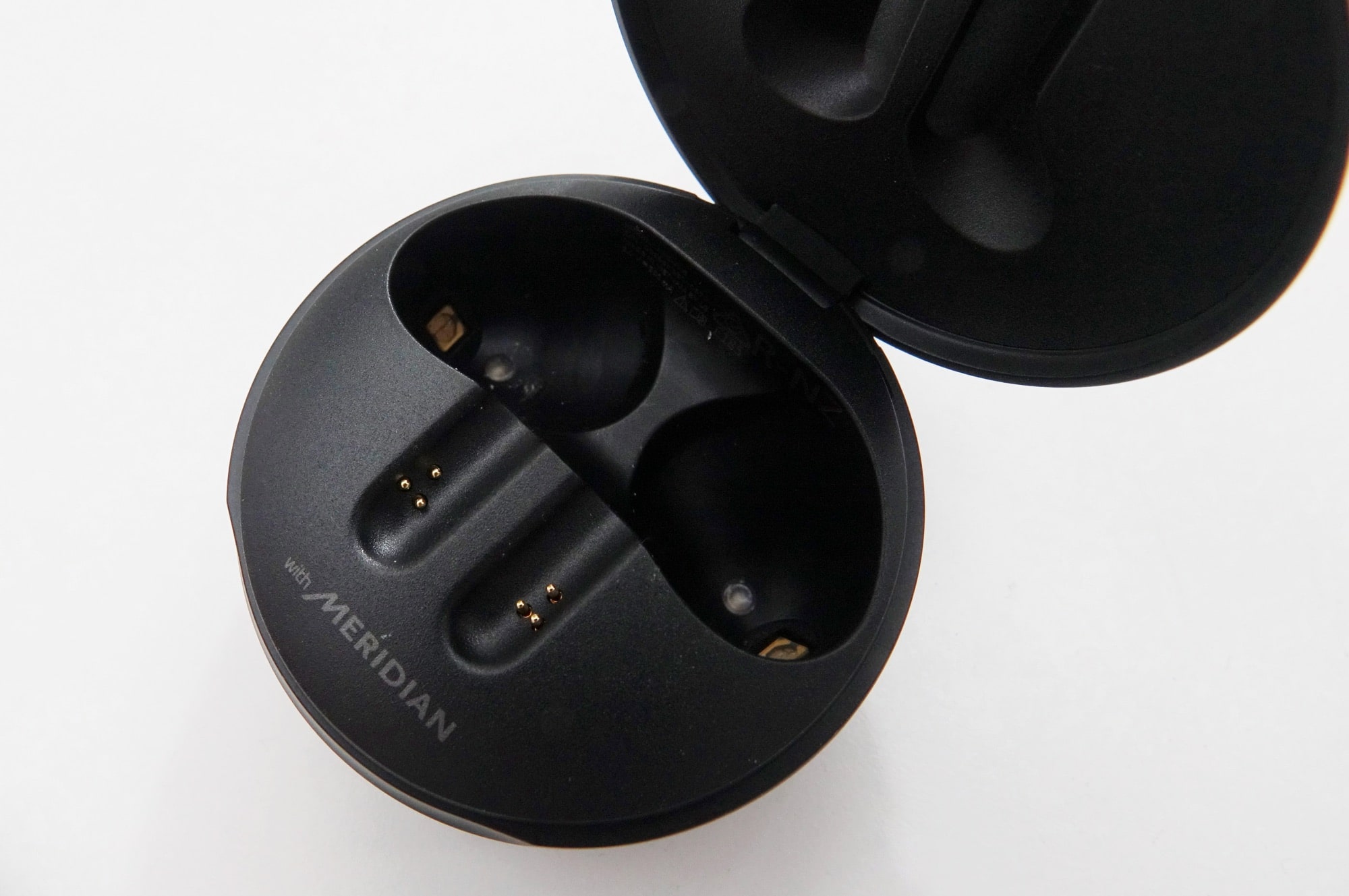 In the age of pandemic and feeling like you need to be germ-free, ultraviolet cleaning might make you feel safe, but the reality is it won’t really likely do much at all. UV lighting hasn’t yet been proven to do anything for the viral germs you might worry about in 2020, and with bacteria really only on the cards here, the “clean” your earphones might get is small at best.

Beyond that gimmick, LG has opted to steer clear of things you can expect from other competitors not Apple in this price range, such as active noise cancellation, something Oppo caters for in the $249 Enco W51 and that Jabra recently added by firmware to its Elite 75t, which was $299 last year but will have likely dropped in price in that time.

Basically, you’re buying the LG Tone Free because they’re truly wireless and they clean, and frankly, only the former really matters. 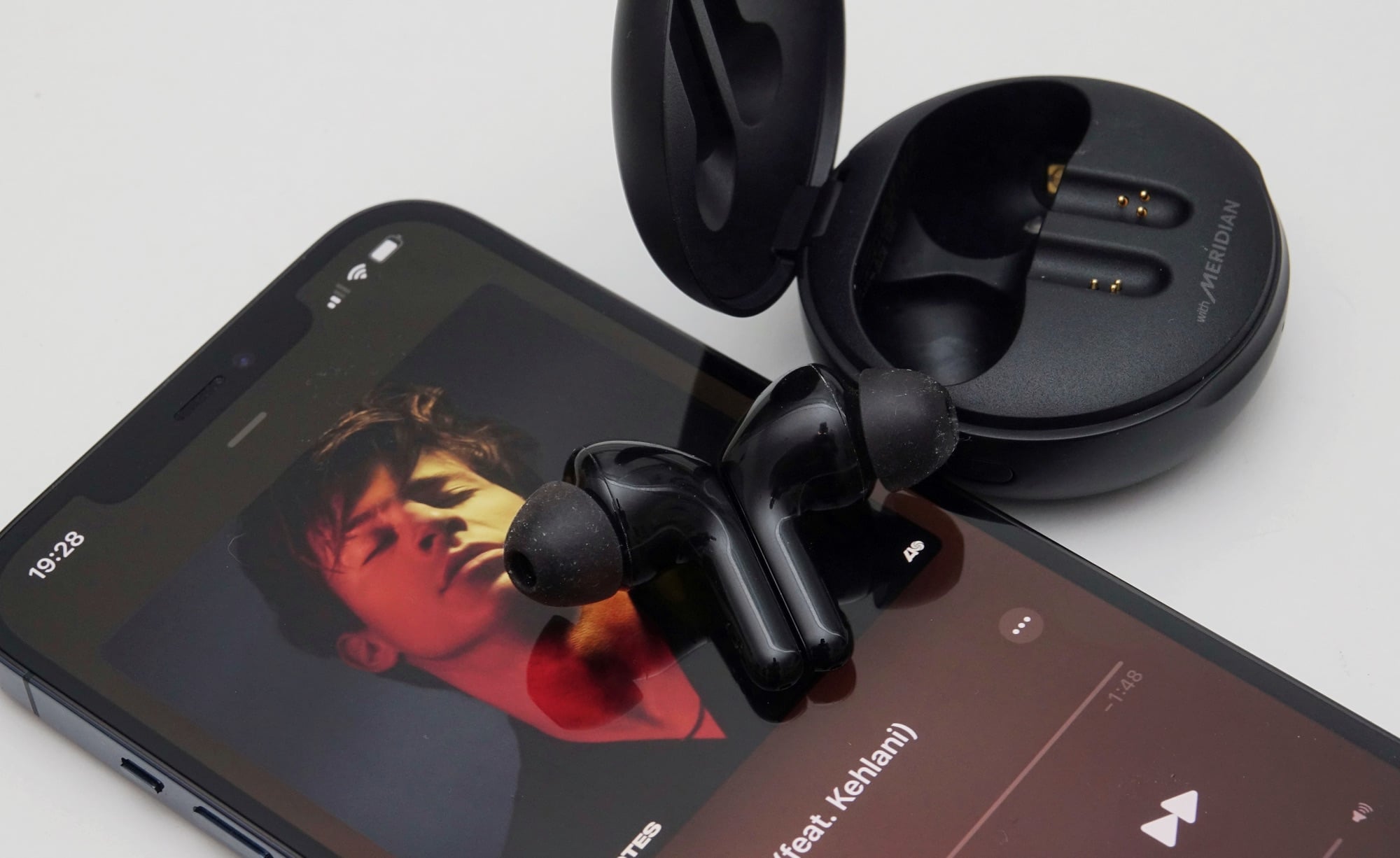 We have to give credit to LG for trying something different all the same, because the LG Tone Free FN6 are definitely that: while they may look like an AirPod, they’re an attempt to shake up the game, even slightly. One could they say almost try to clean out the competition.

There is a problem, however: while LG’s Tone Free attempts to inject something different into what is so regularly a consistent competition, LG hasn’t managed to get the basics right. Basically, the stuff LG needed to nail hasn’t been achieved, and so you’re essentially buying the LG Tone Free because it’s a gimmick, rather than a good pair of earphones.

Between a sound quality that should be better and more balanced, and a price that doesn’t quite deliver on value, you probably won’t be surprised to learn that you can do better, and possibly without even trying too hard. LG deserves credit for attempting something new, but an attempt is only one part of the equation, and it has to nail the rest. Sadly, in its first Tone Free earphones, we’re missing the complete delivery and execution, and are really only getting some of the promise, none of the sizzle.

Perhaps in version two, LG will nail it, like it has with its OLED TVs. For now, the LG Tone Free are just an idea that needs more attention, and could be better in version two. 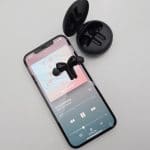 LG ToneFree (HBS-FN6)
Design
Features
Performance
Ease of use
Battery
Value
The good
Very small
IPX4 splash resistance
UV cleaning might be useful to some
Wireless charging case
The not-so-good
Not a lot of bass or mids
Sound can fall flat very easily
UV cleaning is a gimmick
No noise cancellation
3.3 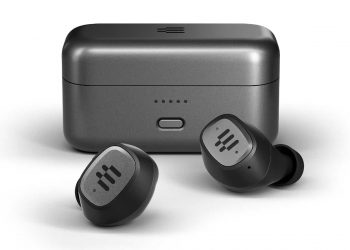 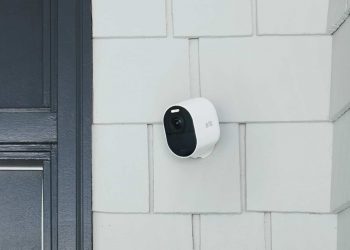