Back problems can’t be solved by “there’s an app for that”, but together with a small piece of hardware called the Upright Go, they might just get set straight.

Your parents always told you to sit up and take notice, but we bet they never knew you could be graded and monitored for it. Well now you can, and all in the interest of good health.

We have wearables for monitoring our physical health, and that’s an area that smartwatch has helped in, but it can’t solve all of our problems. In fact, when it comes to the back, our wearables aren’t forward-facing enough.

That’s where the Upright Go comes in, providing sensors to monitor how you’re sitting and standing, and helping to ensure you do it properly, so your back at least has a chance at feeling good, rather than giving you a chiropractic bill to look forward to.

To make this happen, you need a combination of hardware and software, and that arrives in the Upright Go, a small water-resistant soft white gadgets with a few sensors on the inside and a battery, not to mention a Bluetooth transmitter that talks to your phone to relay those important messages about your posture.

There’s no denying the Upright Go is small — it’s definitely that — and provides the sensors and a haptic vibrating motor to tell you when you’re doing something wrong.

Weighing only 12 grams and charged off microUSB, it’s a positively tiny gadget to be worn on the back with a white silicone exterior that can be hidden under clothes quite easily. 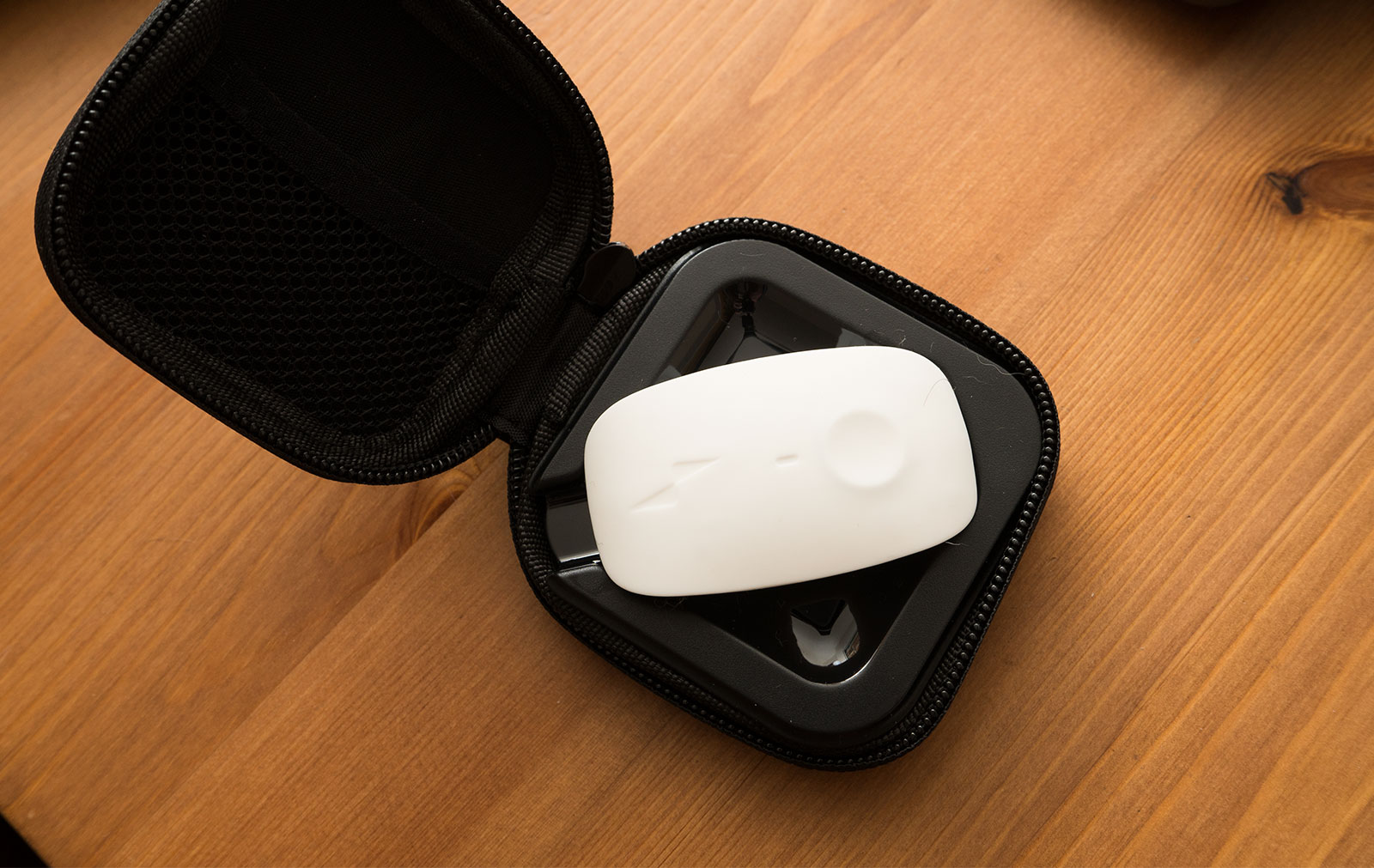 Using the Upright Go is unusual at best, partly because it’s the first wearable we’ve seen that you’re intentionally going out of your way not to look at, and yet it will still remind you of its presence.

Simply power the Upright Go on, pair it to your phone using the iOS or Android app, and attach the Upright Go to the top of your back, letting it do its thing.

There’s a little bit of adhesive which does a good job of holding the small wearable in place, and as we walked, stood, and sat, it continued to work, reminding us when we were bending over too much, essentially training us to, well, not.

Use of the Upright Go demonstrated two things over the course of our time with it:
1. A good work chair is surprisingly good for your back and posture, and
2. It is next to impossible to wash your hands in the bathroom without bending your back, unless you plan to squat and look rather awkward, almost as if you hadn’t finished your business in the bathroom to begin with. 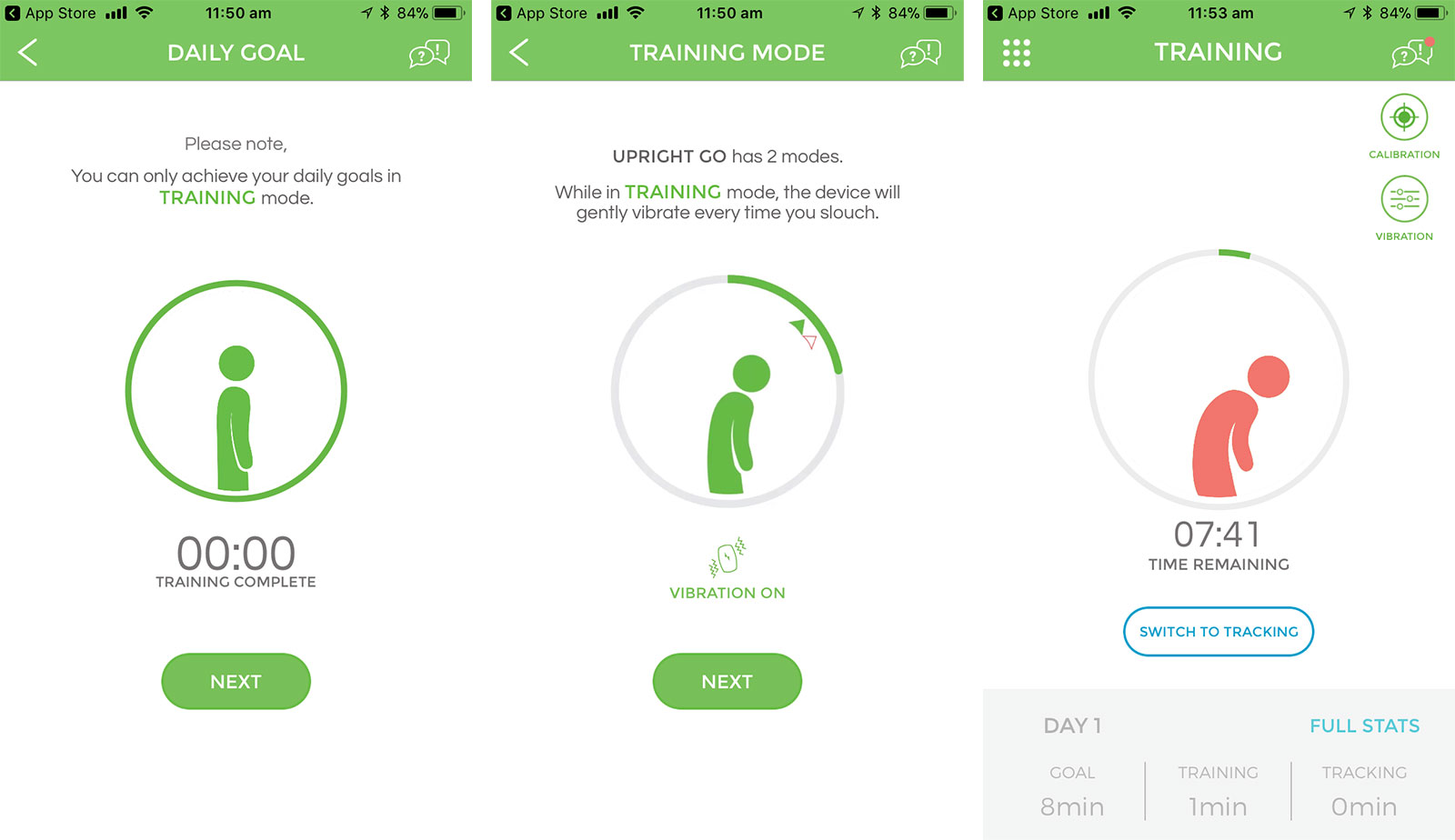 While the Upright Go is a curious concept, you may find the odd discrepancy with its tracking when dealing with leaning back while sitting or standing.

Bizarrely, if you happen to do a fair bit of leaning back, the system won’t usually pick up on your movement backwards, which we’re sure would violate its typical “stand up straight” routine, and yet doesn’t.

We can’t imagine anyone doing the limbo would really be bothered using the Upright Go, that said, but our confusion arises from people who may lean back regularly or have some part of their back bent out of shape where this is normal. If you’re in this situation, the Upright Go won’t give you a straight answer. 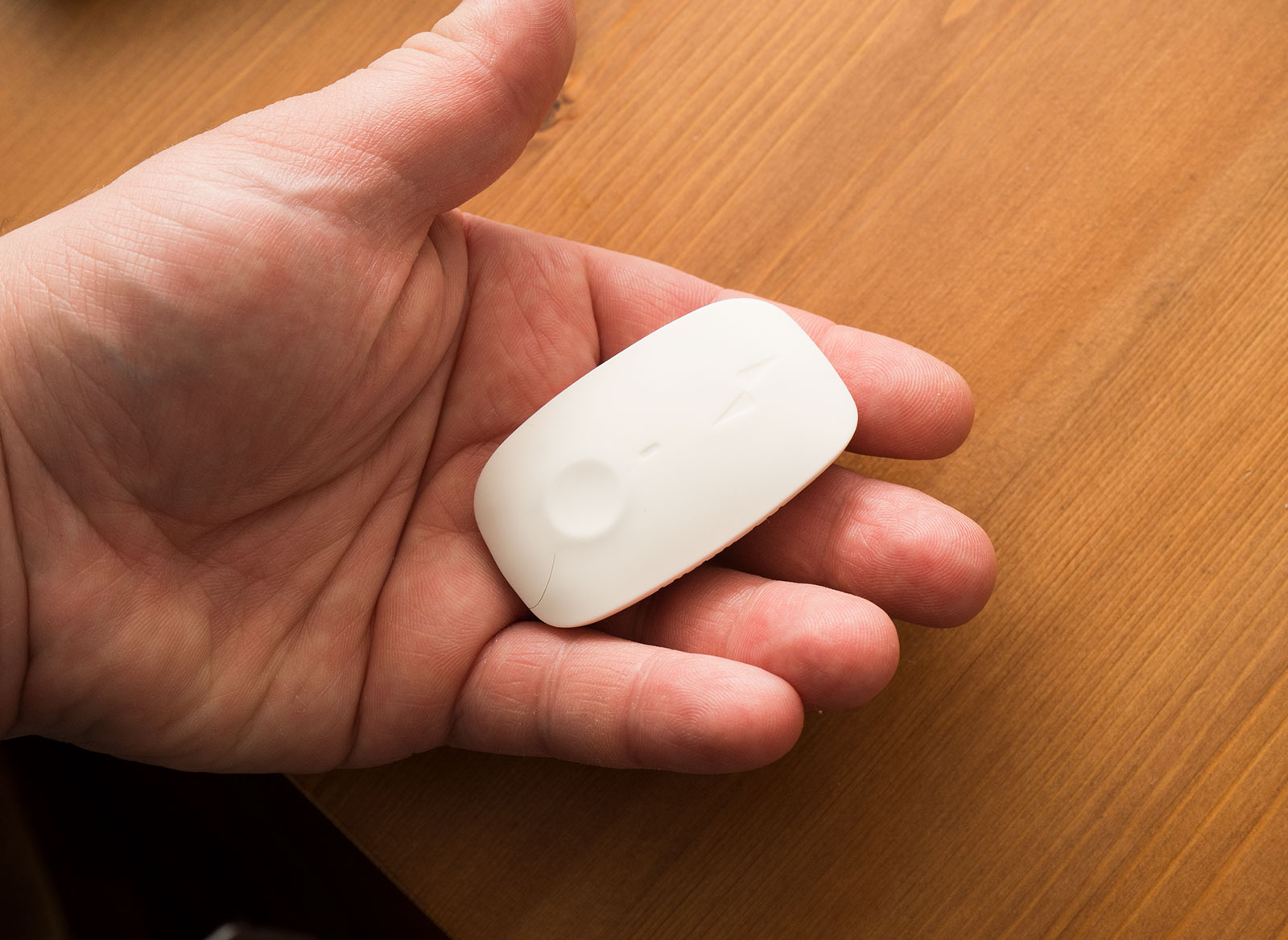 It’s also kind of expensive for what it does, and that’s probably because the Upright Go is a one-use wearable, doing one thing and one thing only.

You know how the Apple Watch and Samsung Gear S3 smartwatch can do several things, like telling the time, controlling music, relaying messages and notifications, and paying for goods and services? They’re multi-use devices, taking on that very idea of convergence and acting on it.

The Upright Go, on the other hand, is a single use gadget: it monitors your posture and that’s it. Sure, it will vibrate when it detects the posture not being correct, but that is all it does.

Even the inexpensive Fitbit devices do more than merely count steps these days, and yet the Upright Go only does this one thing, making it kind of like strapping an expensive compass to your back and having it feed your phone the news.

That issue — that one purpose that it has — kind of makes the Upright Go come across as a one-use wonder, and it seems very expensive for what it does, the $149.95 price tag feeling a tad exy for something so simple.

We’re sure people with back problems are very common, and we suspect these problems start in the easiest of places. You might not sit properly in your chair, or you might already figure something is wrong and that you need a new chair.

This might not even be a chair problem in the first place, and you might know that it’s an issue with how you stand, how you slouch, how you position your body when you’re doing basic things like talking, shoulders slumped and such.

If you know this is a problem, the Upright Go could be a good product to check out, but the reason we say “could” stems more from the cost and long-term use. Simply put, the $150 price tag already seems a little too much for what it does, and we’re probably being quick to say that after one day with the Upright Go, you’ll probably know exactly what you’re doing wrong and want to correct it.

Correcting it, however, may not mean ever wearing it again, or wearing it for long periods of time. After one day’s use, you might be able to recognise what you’re doing wrong without wearing it, imagining the problem in the back of your mind when you’re slouching, identifying just how the Upright Go would be buzzing and picturing it doing just that. 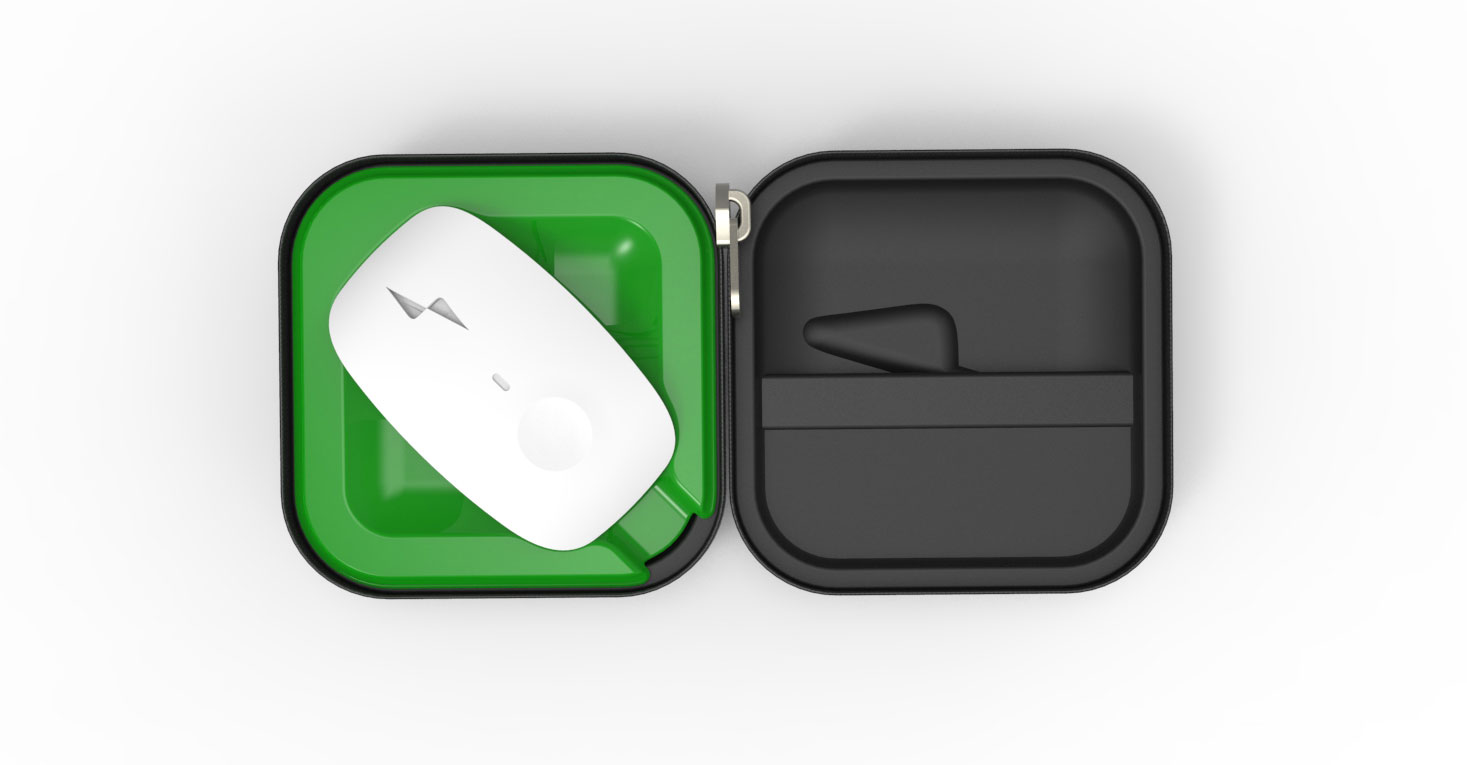 That’s the biggest problem the Upright Go has going for it: once you’ve used it for a day, you may not feel you’ll ever need it again. It’s kind of like having a chiropractor watch you all day, tell you what you’ve done, and having you go out of your way to fix it.

We have little doubt that poor posture affects spinal problems, but that doesn’t mean using the Upright Go will prevent you from seeing a back specialist overall, because this is really just a monitor to tell you when you’re not sitting up properly to begin with.

For that reason, we have a hard time recommending this to anyone but folks who know they have poor posture and permanently need a reminder. We’re not sure who those people are, but if you’re one of them, this gadget could help. And if you’re not, buy the better chair: it’s probably a better long-term purchase overall.

Design
Ease of use
Value
Readers think...2 Votes
The good
An interesting way to monitor standing or sitting position
Small and unobtrusive
Buzzing isn’t all that uncomfortable, more like light tickling
The not-so-good
Doesn’t monitor every movement, particularly back
Seems expensive for what it does
Kind of one use: a wearable made for one thing and one thing only
3.2 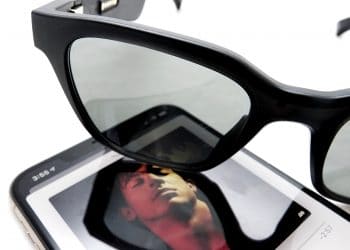 The Wrap – What’s next in phones and more 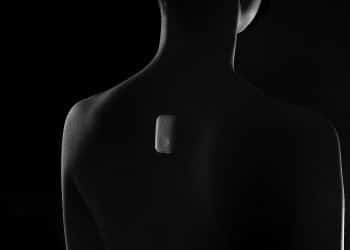 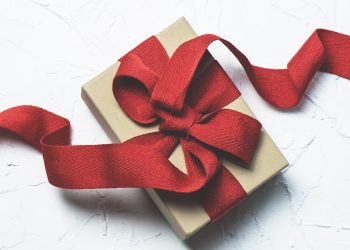