I consider myself a relatively peaceful, normal person. My life isn’t totally filled with chaos, and I live a comfortable life. And yet, ever since I started playing the twin-stick 3D shooter Ruiner, I’ve had a phrase seared into my brain: “KILL BOSS”. Once you hear why, it will make total sense.

There are people out there that like a challenge. They see the 10,000 piece puzzle and don’t even bat an eyelid, or they try to get the job they are infinitely not qualified for. After this week, I actually believe there is a video game just for them.

It’s called “Ruiner”, and its name more or less cites what it does: it will ruin you for any other experience, and yet make you yearn for more or less anything else. Let me explain.

Ruiner takes place in a futuristic industrial jungle called Rengkok, heavily inspired by 1980s cyberpunk classics such as “Blade Runner”. There’s a new movie based off that franchise out, so we’re just going to assume they planned the game’s release around the film.

And it’s hardly surprising, either, as Ruiner does very well in paying tribute to the popular cyberpunk theme, complete with neon and crimson lighting, industrial beats, and gritty textures that leave you feeling like you wandered into an alternate digitally-augmented universe.

You — Daft Punk’s estranged brother rocking one hell of a fashionable leather jacket and LED helmet — must frantically fight off waves of enemies armed with a trusty metal pipe and a range of assault weapons. Because why not, right?

The game’s story-line is also fairly straight-forward, revolving around your brother being kidnapped and you attempting to infiltrate and destroy an evil corporation who– do you even need me to go on? You get the picture: you’re pissed, your family has gone missing, and it’s time to kick some ass. Blah blah blah, and the sound of a weapon being cocked.

Dual stick controls are what make this shooter usable, and if you’ve ever played “Hotline Miami”, you know roughly what we’re talking about. In fact Ruiner is actually quite simple in nature and you won’t find much diversity in terms of gameplay, running around and beating, bludgeoning, and shooting everything senseless, though there are plenty of opportunities to pick up new weapons and upgrade your skill abilities and gadgets. Again, because why not, right?

Every so often you will experience a flash of 2D art which will display character dialogue, and that’s quite a nice break from the top down 3D style you’re presented with all the way through. 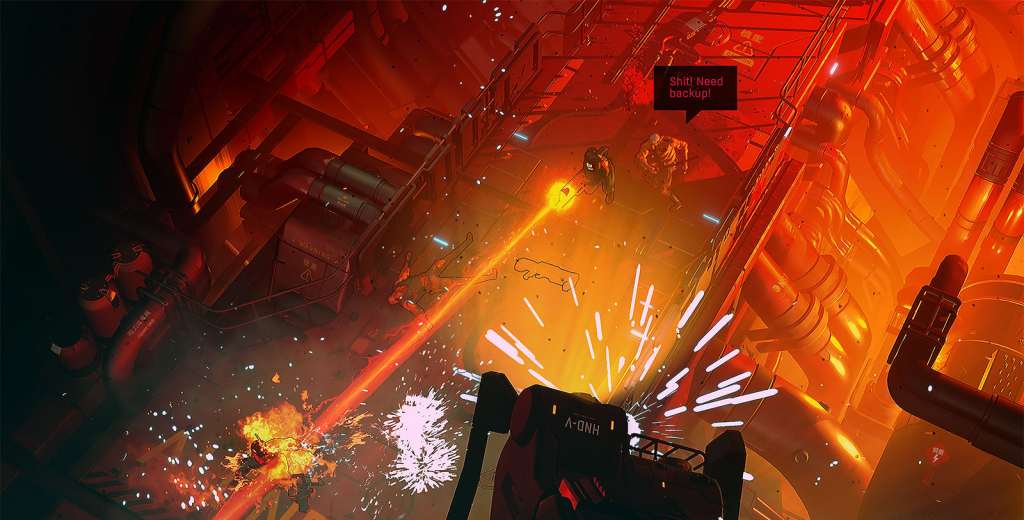 Unfortunately, the overall gameplay can be a tad strenuous, running and gunning your way to constantly kill everything in sight (you’re pretty freakin’ annoyed at the world). And that’s where it gets frustrating, because it doesn’t take long to realise that the game’s difficulty level is so hard and so aggressive that you may not begin to care if your character dies. In truth, you may end up kind of relieved.

Being a two-stick shooter, I often found myself frantically swinging my pipe almost like Gordon Freeman’s crowbar in the first few levels of Half-Life, trying desperately to strike down Ruiner’s evil cyborgs while running backwards, pleading with the game from the couch and hoping for a metal-to-jaw connection, only to discover my character was actually facing the wrong way.

It’s a frustrating issue that just doesn’t feel well thought out, dragging your gameplay into an almost oblivious state of frustrating turbulent design. At times, Ruiner will seek to confuse, as the screen lights up like someone has suddenly flicked a match into a fireworks factory, lighting up an explosion of bullets and neon lights filling the screen.

Yay: you did something, but it doesn’t seem to be something that has helped. And it happens again, and again, and just again and again and again. And you start to question just why you’re playing this bundle of fire and nerves and black and red, and your blood begins to boil, and you realise that the world would perhaps be nicer if you went and made yourself a nice cup of tea instead.

Quite seriously, Ruiner’s biggest problem is repetition, plain and simple. No matter how good you think you are, you will die a lot in this title, which at times feels like you’re crawling through virtual glass, trying to kill everything you need to kill, even the bosses that just won’t die. Cut by cut by cut, you’ll endure a level of hell you weren’t sure was possible outside of a digital recreation of Dante’s Inferno, and not that game we saw seven years ago.

After spending hours on Ruiner and shedding tears, I personally believe the best part of the game is bludgeoning a low level enemy in the head with a pipe, whereby you are rewarded with blood and an avenue to express your distaste for the game overall. Dead set, Ruiner is a game that will almost taunt you for trying it, gripping you tightly and asking you to fight back, which you’ll be keen to for the first few hours, but like all things, you’ll begin to feel edgy and yet also numb towards the end.

Maybe if Ruiner had started with all the gadgets and weapons unlocked from the beginning to let you go after your brother’s captors with all the aggression the game wants you to have for it. Instead, it seems misdirected, and forces you to throw it at the game itself, offering a seriously steep climb to get to somewhere fun, and by that time it simply isn’t worth it.