Samsung’s latest batch of TVs look set to play Xbox games even if they don’t have an Xbox. BYO controller and service, and you’re good to go, it seems.

Playing games on your TV may have just become a little easier and way more full-featured, provided you have a very recent TV, as Microsoft and Samsung collaborate on something neat.

In what will likely be the beginning of the future of games, Microsoft has worked with Samsung to add the Xbox app to its TVs, making it one of a few playable game services without needing a console for its screens.

The addition of the Xbox app to Samsung screens is something that is only presently happening on the 2022 TVs Samsung launched recently, covering Neo QLED across 4K and8K, plus the standard QLED range, and even Samsung’s Smart Monitor Series launched this year as well, and it’s very much an app made like what we experienced in Xbox Cloud Gaming.

Simply put, the app will let people log in to an Xbox Game Pass Ultimate subscription and stream games without needing a console at home, instead using the power of the cloud which will basically allow them to use Xbox consoles on the web to run the games, streaming the experience and controls back to where ever they want to run it. This means a phone, a computer, or even, yes, their TV directly, which at the moment appears to be Samsung only, but that could change over time.

“We’re on a quest to bring the joy and community of gaming to everyone on the planet, and bringing the Xbox app to smart TVs is another step in making our vision a reality,” said Phil Spencer, CEO for Microsoft Gaming.

“That’s why we’re excited to partner with Samsung, a global leader in TVs, on bringing Xbox to more players,” he said.

“Working with Samsung has helped us provide more access to gaming and enabled us to welcome new players into our thriving community.”

Microsoft’s addition is part of Samsung’s Gaming Hub on its TVs, which also includes the ability to map consoles to different shortcuts, handy if you have one or two consoles already, but it also offers a little more. 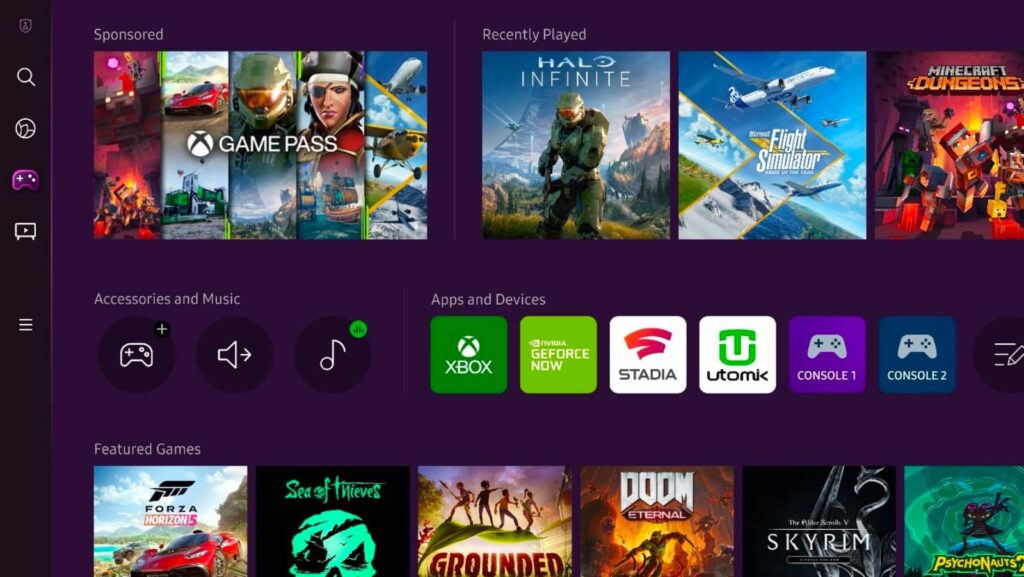 Samsung’s screenshot above shows the Xbox app, but it also shows other apps and devices for its Game Hub, with Nvidia’s GeForce Now, Google’s Stadia, and another service Utomik also available on Samsung TVs, though in truth, we’d expect every one of those to run except Stadia, which doesn’t exist in Australia yet. Utomik and GeForce Now both cater to PC games in virtualised environments, while Xbox is the first app on Samsung’s Gaming Hub to be console based, bringing Xbox games without needing an Xbox console, much like how GeForce Now and Utomik bring PC games without a PC.

It means that when this launches, Samsung TVs will offer several ways to get games going without needing extra physical hardware, and could making gaming just as simple as grabbing a controller, paying for a service, and getting stuck into games as easy as that.

Samsung’s 2022 TVs will see the Xbox app launch in July.