How much is an improved wireless network at home worth for you? If the answer is everything, Netgear’s latest Orbi could be for you, provided you have the funds to back it up.

When it comes to upgrades, there’s a pretty solid chance you’re thinking of some specific gadgets and devices in your life. Your phone is probably the first to be considered, but you might also spend on headphones, a camera, your laptop or tablet, and probably your TV.

Your home network tech, however, is probably furthest from your mind.

Even though many of need it, and there are some easy WiFi wins when you replace those devices, buying a new network system isn’t exactly a purchase to leave you feeling totally fulfilled. It’s necessary these days, but not a gadget we’re all going to want to spend money on, and may be why we put up with mediocre performance from the router our internet connection came with for so long.

There are plenty of choices when it comes to network upgrades, but recently, one has popped up focusing on those newer gadgets you might have upgraded to.

Recent phones may sport the WiFi 6E technology — such as the Galaxy S21 Ultra and Galaxy Z Fold 3 (not to mention other Samsung phones) — a variant of WiFi that boosts wireless capabilities by offering a special high-speed band solely for those new devices, built to deliver high speed capabilities.

Even though WiFi 6E was talked about last year, the first router to sport the tech arrived only recently from Netgear, and while that router is built to service homes with a need for speed, it mightn’t suit all.

Larger homes with more spread out layouts may be suggested mesh networking, which creates a sort of a Venn diagram of wireless networking, spreading the networking technology across a home using several WiFi stations, as opposed to one router that works from a central location. If you have a larger home with a lot of space, a mesh system might be better suited, given it can spread the wireless reception out, and that may be where Netgear’s second 6E gadget could come in. 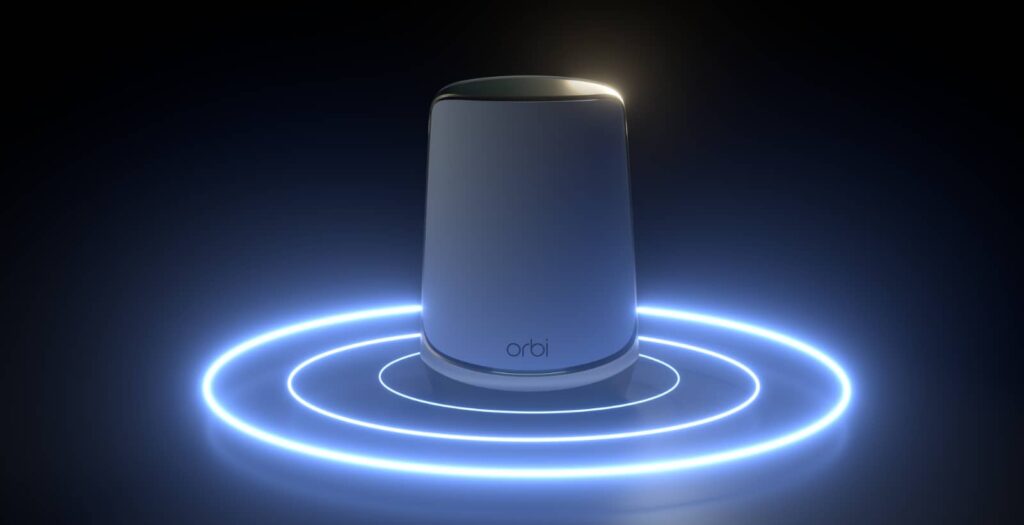 Launched this week in Australia, Netgear’s Orbi WiFi 6E quad-band is another of its Orbi mesh systems we’ve seen before, only it comes packing in more tech, supporting four bands of wireless network catering for slower devices at 2.4GHz, faster devices at 5GHz, and the most recent tech with 6GHz WiFi 6E. That last band is an extra 5GHz band Netgear uses to send data between its Orbi network devices, making it a tri-band system with an extra fourth band for traffic management.

All four bands come together to make it a quad-band mesh system, and the industry’s first quad-band WiFi 6E system, providing support for up to 836 square metres of space in the Orbi WiFi 6E three pack, with support for more room if you buy extra Orbi devices (satellites) as time goes on.

There’s an app to manage the system, and support for high speed Ethernet in its devices, so you can plug in a console or computer to one of the Orbi satellites if needed, but wow, this is not an inexpensive wireless network system, so be prepared to spend up big, costing near $3K in Australia.

Locally, Netgear’s Orbi Quad-Band WiFi 6E mesh system will cost $2799 for a three pack (RBKE963), whether you get it in white or black, while add-on satellites to bolster the range will cost $999 each.

That could well set the benchmark for the highest-priced home networking system we’ve seen yet, and certainly towers over any other network device we’ve reviewed before, mesh or otherwise.

July is when Australians can expect to find the Orbi WiFi 6E mesh device, though, with JB HiFi the only physical store you can expect it in, otherwise you’ll find it from Netgear’s store online, as well.