If you own an iPhone or iPad and are after a few new features for your device but don’t want to buy something new, there’s an update waiting around the corner.

It can seem like all the operating system talk in phones is about Android, and often waiting for manufacturers to approve the latest and greatest, but it’s not quite the same for an iPhone. While Google’s Pixel phones will get Android 12 very shortly and upon immediately upon release, most other phones will have to wait, as manufacturers tidy up their own versions, a process that can vary wildly from weeks to well over a year.

The same isn’t true over in the world of iOS, where Apple phones and tablets invariably get their releases on day one regardless of where you purchased them. There is only one maker of the iPhone and one maker of the iPad, and that means there is just one company approving the release of the operating system that runs on both of those devices: Apple.

And this week, Apple is ready with its own next update for iPhone and iPad, as iOS 15 becomes available.

The next generation of Apple’s mobile operating system, iOS 15 changes a few things and adds in features, helping to revitalise the whole thing, which may well make it feel like you have a new device, even if it’s just a change to the software.

Some of those features include blurring the background while you’re on a video call, or bringing more friends into one and changing the position of audio in a FaceTime video call to make it seem as though people are talking around you, a feature that uses Apple’s approach to spatial audio originally launched with movies in the AirPods Pro, but is gradually being expanded.

In fact, Apple is adding spatial audio to music in a different way, allowing people with select headphones to experience music in a wholly spatial way.

While the Dolby Atmos supported spatial audio of Apple Music supports numerous headphones to play a surround sound experience with music, it’s an experience that appears more spatial due to how it has been engineered.

Dolby Atmos music can sound bigger in soundstage, even if you’re not necessarily getting the full surround experience of hearing music elements depending on where your head is against a real speaker delivering surround audio. That changes this week.

With the release of iOS 15, people using Apple Music and either a pair of AirPods Pro earphones or AirPods Max headphones will support directional tracking in Dolby Atmos tracks, meaning your head position will play sound elements with a more directional sound, more or less answering the criticism of the technology we had back when it launched last year.

It’s not the only change to media, either.

More services will support the ability to share the experience of what you listen and watch, with Apple’s “SharePlay” feeling a little like a feature born from pandemic. In an age where sharing with friends remotely has become the norm, Apple SharePlay will means people can watch and listen to the same movies, TV shows, fitness programs, and so on and so on in FaceTime calls using the tech, basically amounting to a group watching session, even if we’re all nowhere near each other. 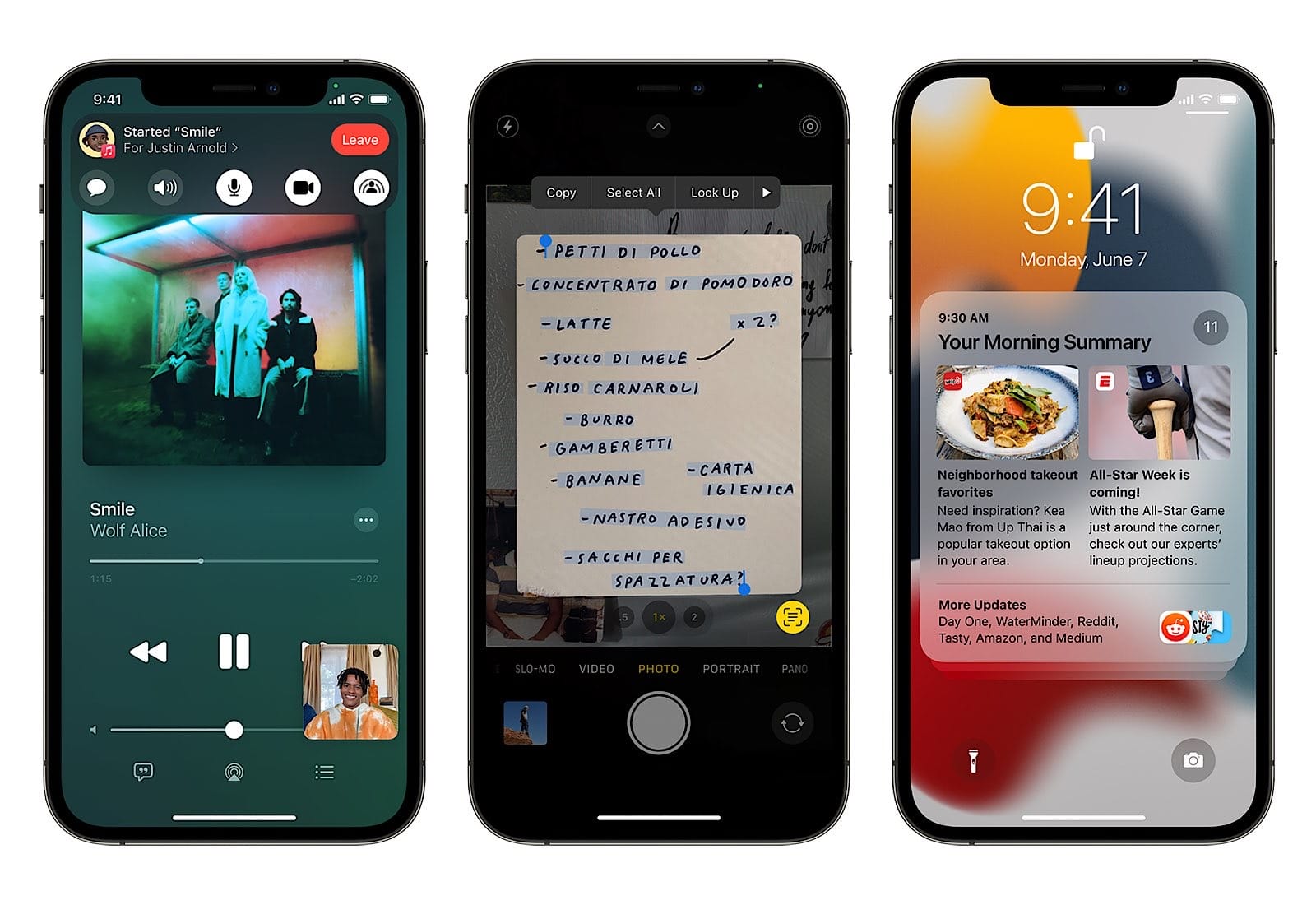 If you are nowhere near friends and families, that ability to share will also go to the text messaging of Apple’s Messages app, and anything shared with you will appear in “Shared with You” section of several apps, going beyond the typical section in Photos, and also arriving in Apple Music, Apple News, TV, Podcasts, and Safari.

And in Safari, you’ll see some clearly obvious changes, as well, including more of the screen, as the browser’s URL bar can now be found at the bottom, showing a little more of the websites you visit.

There’s more happening in iOS 15, including with additional Memoji, text capture from photos that can send the results to a form (such as from a picture of a WiFi password at a hotel to your WiFi password field in settings), automatic translation from languages, improvements to Apple Maps, and an updated look for weather with notifications for when it’s about to rain.

It’s a pretty packed iPhone update, and we haven’t even touched upon some of the extras iCloud+ subscribers get, such as security camera recording from HomeKit enabled devices and extended privacy features.

As for release, it’s a feature set arriving in iOS 15 for iPhones going as far back as the iPhone 6s, while iPads as old as 5th generation and iPad Mini 4 are supported, as well.