The next adventure you go on could be captured in a way that plays nicely on any TV for a while, as GoPro goes big on the inside.

Even though phones may be gradually eroding the need for many to own something described as a proper camera, companies that make those proper cameras are finding ways to innovate in the space.

That typically comes in the form of new features, something that given what the iPhone 13 Pro and Pro Max can do with cameras is probably a sound approach. However, as cool as that tech is, and as much as it has the chance to change what people are doing in the world, it mightn’t be the best bet if you’re going on an adventure and need to capture your exploits.

For folks jumping on a bike, hitting the surf, or doing something else where they don’t want to be holding the camera and giving it their entire attention instead shifting their focus and perspective to the action being done and not the camera, there is a breed of device for that: the action camera.

The humble digital action camera has evolved quite a bit since it was kickstarted and practically made famous by GoPro in 2006, though it was a totally different breed of “Hero” cameras back then when it only captured 10 seconds of video.

Fifteen years later, we’re well past the 10 second limitation, and entirely past the resolution. Fifteen years on, GoPro’s next generation is the same size as last year’s Hero 9 Black, but sports more grunt and capability in the Hero 10 Black. 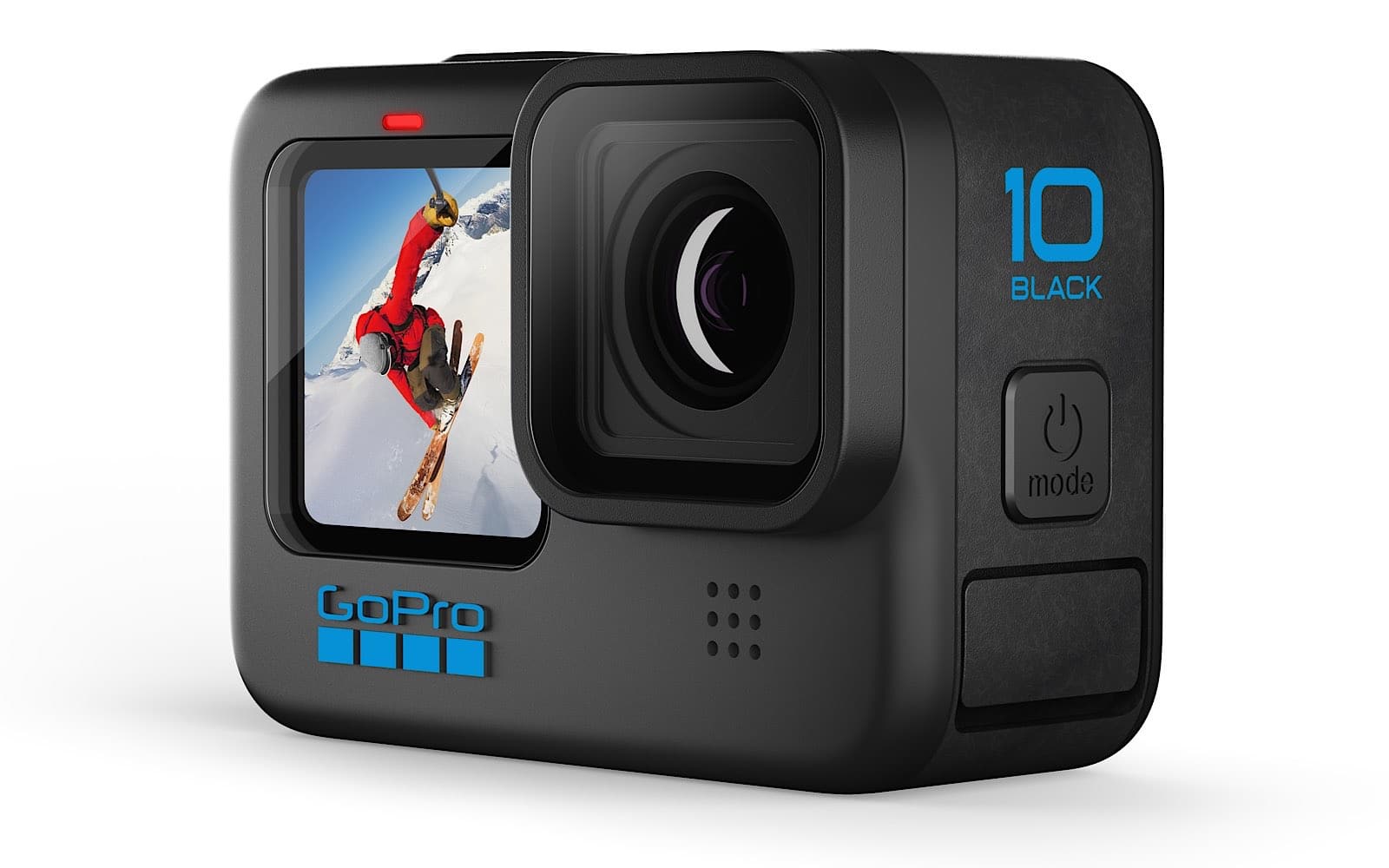 Of that capability, GoPro is giving the Hero10 Black a new sensor capable of capturing images at 23.6 megapixel, nearly twice that of what popular phones provide, given 12 megapixels has become the default size for many a smartphone these days.

That 23 megapixel image enables the GoPro Hero10 Black to capture video a 5.3K, just above 5K, running at 60 frames per second for smooth 5K video, while dropping the resolution gets you more slow motion support. If you choose 4K video, ideal for many a 4K TV these days, you’ll find 120 frames per second, and if you drop to 2.7K (a few hundred pixels better than Full HD), you’ll see smoother slow-mo again at 240 frames per second.

Helping GoPro hit these crazy video targets is a new chip, something it calls the GP2, a processor that works to deliver noise reduction and tone mapping even when the light is down, while also keeping the camera image quality strong.

In fact, the stills ability is so strong that even when you’re capturing video, GoPro says you can get near-20 megapixel images out of the camera when capturing in 5K video, allowing you to pick one format such as video, and still get high-res stills out of the result.

That tech will also help the video stabilisation happening under the hood, now in version 4. According to GoPro, HyperSmooth 4.0 can use an in-camera horizon levelling to smooth videos with extreme tilt, helping to make the most rocky ride feel steady. The Hero10 smoothing technology won’t quite give you the same latitude in frame rates, mind you, dropping back to 4K at 60 frames per second, and 2.7K and Full HD at 120 frames per second. 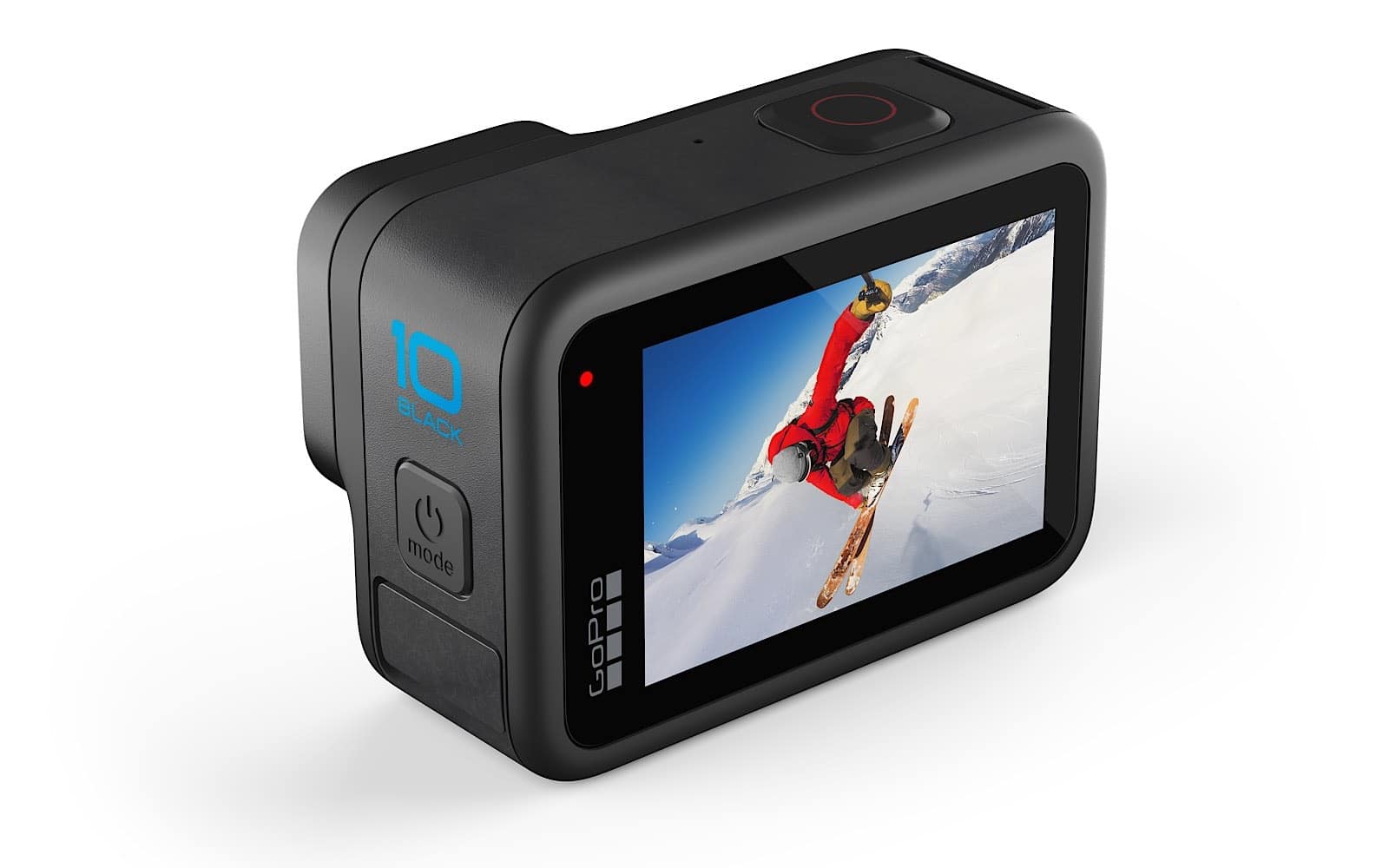 Glancing at the Hero10 Black, you’d be excused for thinking it’s last year’s model, because GoPro hasn’t changed the look, short of switching the GoPro logo from white to blue.

That’s the main difference, with the camera still featuring a waterproof and rugged design without an extra case, able to be used underwater for up to 10 metres all by itself. There is a new lens cover with a hydrophobic design, which should be good for keeping water away from the view, and GoPro is including three microphones with noise reduction support, as well.

But by and large, the Hero 10 Black looks like last year’s Hero 9, but with a blue font. All the fun parts are under the hood, and potentially give more ability to people taking more video and pictures of their exploits.

“Hero10 Black is one of the most impressive cameras in the world, regardless of price,” said Nicholas Woodman, Founder and CEO of GoPro.

“Congratulations to our product and engineering teams on creating such a worthy 10th edition of our beloved Hero camera,” he said.

The camera can also upload to the cloud while it’s charging (provided you have a GoPro subscription), sending files to the Quik app more quickly with the camera than previous models, though it can also do it faster again if you plug it directly in using a USB cable, given the GoPro is charged through the Type C USB standard available on many Android phones. We’re not quite sure how this will work on the iPhone given a Lightning converter, but much like how you might need one of those for other devices, such as THX’s Onyx DAC, suspect the tech could work through there.

The pricing is also interesting, especially given GoPro effectively gives subscribers to its GoPro annual subscription a little less to pay. While subscribers typically get the auto-upload cloud access plus unlimited backup and a “no-questions asked” approach to damaged cameras, the $69.99 annual GoPro subscription also cuts $150 off the price.

Specifically, the GoPro Hero 10 Black will cost $599.95 in Australia for subscribers of the GoPro plan or for people who want an included one year subscription. That seems to be distinct from the standard cost of $819 with the subscription, which may well be an opening cost. Alternatively, the camera will cost $749.95 without a subscription, because you mightn’t want it, as well. GoPro will also provide a special pack with a case, stand and extra battery, plus a camera case, with this adding an extra $100 to the price at $699.95 at launch.

As for availability, that appears to be right now, with the GoPro Hero10 Black heading to stores this week, and last year’s Hero 9 Black dropping in price to $529.95 with a one year GoPro subscription or $599.95 without.