Your next vacuum might just help you get the best clean of your life, and all because of a laser and a tiny sensor inside.

If you’ve wondered how the vacuum could evolve, technology has the answer. They can get faster and better motors, long life batteries, improved suction, and all the things you’d generally expect including getting smaller, but they can also find new ways to make an impact on your home.

That’s largely what Dyson did when it announced the Dyson V15 Detect in late-March overseas, producing a vacuum cleaner that came with some hardware smarts the likes of which no one had seen before.

The newest from Dyson’s massive R&D team, the V15 Detect has been built by 370 engineers across the world to come up with a way to capture more dust, and to let people find that dust to clean. So much of the dust in our home is tiny and impossibly small, that one pass with the vacuum doesn’t always cover it, so Dyson did something a little sci-fi: it added a laser.

Specifically, it added a green laser, angled using a specific 1.5 degrees and using a custom lens that appears warped, allowing the laser to be mounted from one side and yet cover the path alongside the front of a vacuum head, illuminating the way and highlighting all the particles you might normally miss.

Finding the dust with a laser isn’t enough, though, because Dyson found a way to count it, too, essentially giving you numbers for how much you’ve been capturing.

To do that, Dyson developed a special sensor — a tiny acoustic piezo sensor — that essentially picks up on the vibrations of dust entering the vacuum chamber and turns it into signals. Each signal is counted up to 15,000 times per second, which in turn tells the Dyson V15 Detect how much dust is being measured.

The result reads as a bar graph, animating with numbers and longer bars based on how much dust of varying sizes you can see, and almost applying a rather gamified approach to cleaning. 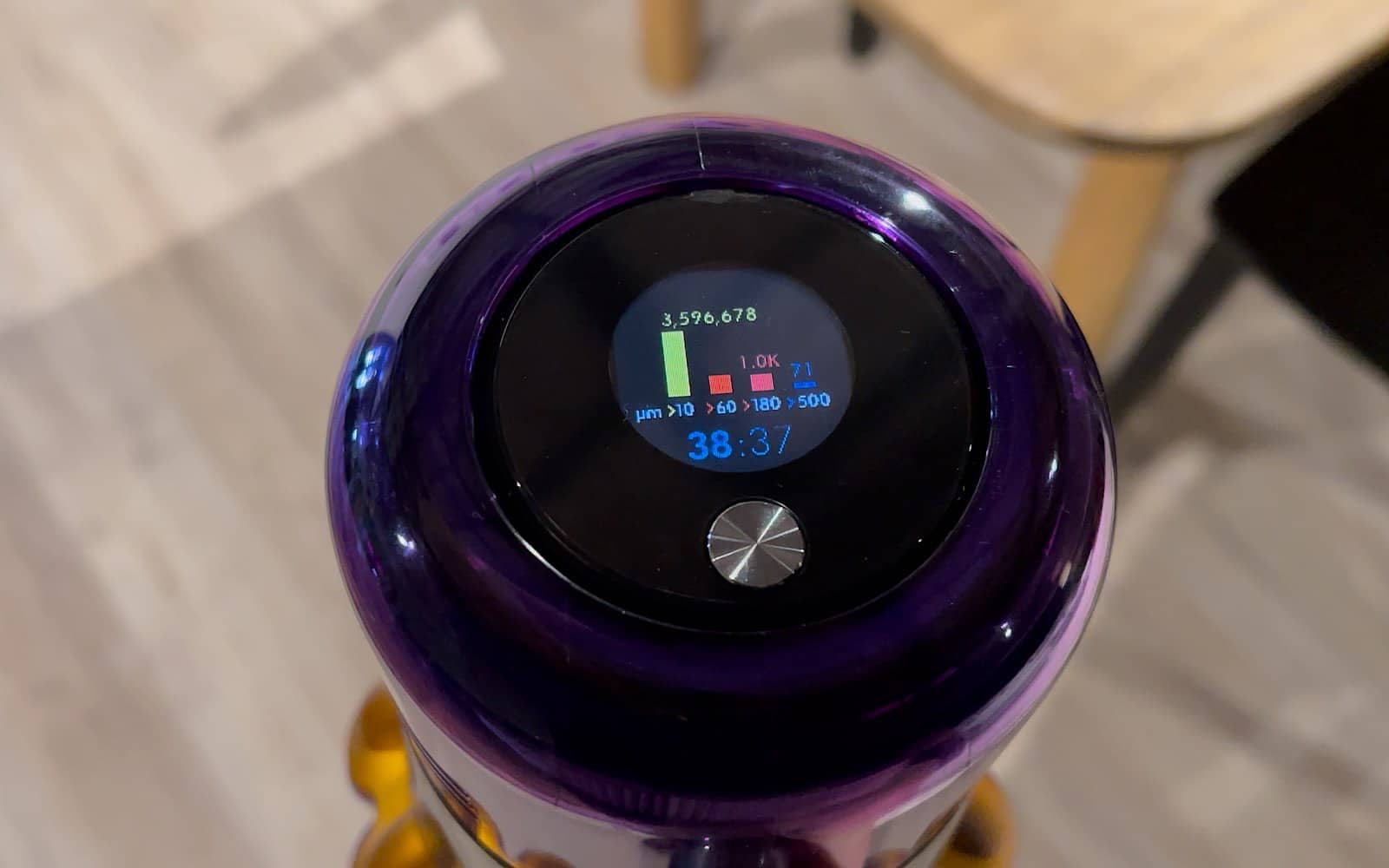 That sensor is used for a purpose beyond counting the dust, as neat as that is, with the sensor responding by changing the vacuum power based on the type of dust it has picked up. If it’s a larger amount of dust, the power goes up, but when dust normalises, the vacuum suction reduces to a lower level, conserving battery power. Of course, you can always override either with either a low power “eco” setting or the high power “boost” setting, but the automatic mode is the vacuum working with the sensor to get it all and use the battery in as balanced a way as it can.

“As engineers our job is to solve daily problems, and the past 12 months has created plenty of new ones with more time spent indoors,” said James Dyson, Chief Engineer and Founder of Dyson.

“We are all cleaning more frequently, trying to remove the additional house dust but desperate for peace of mind that our homes are truly clean,” he said.

“The Dyson V15 Detect is both powerful and intelligent, giving the ultimate reassurance – scientific proof of a healthier, cleaner home.” 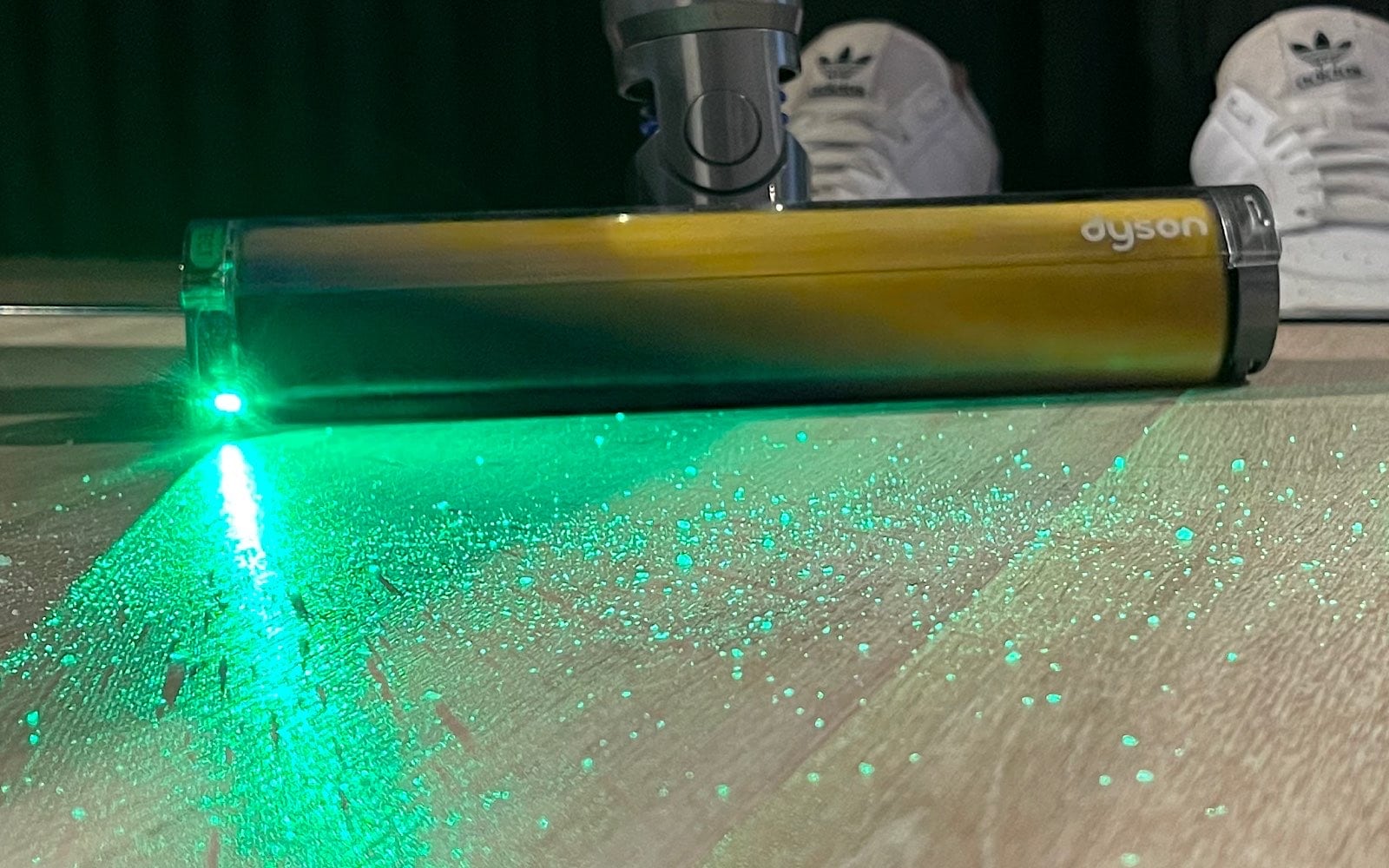 Playing with the Dyson V15 Detect at its Australian launch in Sydney this week, we were intrigued even more than we had been at first, simply because of that sensor.

While the laser light is interesting, it’s a feature you can turn off, triggering it on and off with a switch on the Slim Fluffy head, and while Dyson won’t be releasing the laser head by itself, we found that it should work on other Dyson V-model vacuums from the V8 and higher, simply because the connection is the same. It mightn’t balance power the same way, and may drain battery on a different vacuum faster, but the technology isn’t different in the vacuum itself.

But the addition of the acoustic sensor in the V15 Detect is something very different, and talks to a little onboard computer to show the size of dust being picked up.

As Dyson has been playing with dust filtration and cleaning in its Pure Cool cleaners for some time, this makes a lot of sense, and kind of delivers a complete circle of cleaning for the home: the fans filter the air of the smallest particles, and the V15 Detect can now clean everything else, as well, with a five stage filtration technology preventing it from coming back out.

The Pure Cool cleaners can technically handle lower particle sizes, mind you, dropping down to particulate matter down to 0.25 microns (PM2.5), while the vacuum can only handle 0.3 microns (PM3), but it’s a combination that means homes can be cleaner overall. Yet there’s something else, with a cute gamification approach that Dyson has unwittingly brought in, turning vacuuming into a bit of an entertainment experience.

Without realising it, that bar graph results list turns the act of cleaning into something of a physical video game, and more or less dares you to push past certain numbers, or possibly dares your children to.

There aren’t any social sides to this, mind you, and you can’t share dust counts from the vacuum, as there’s no WiFi or Bluetooth here, something Dyson’s Australian arm told us was to make the vacuum as simple as possible.

However, you can always snap a picture to share just how much it being captured, and use that as a bit of a trophy: huzzah, you just cleaned the house of 13,557,652 microscopic dust particles that you’d have otherwise been breathing in. Huzzah!

Solving the tangle of hair 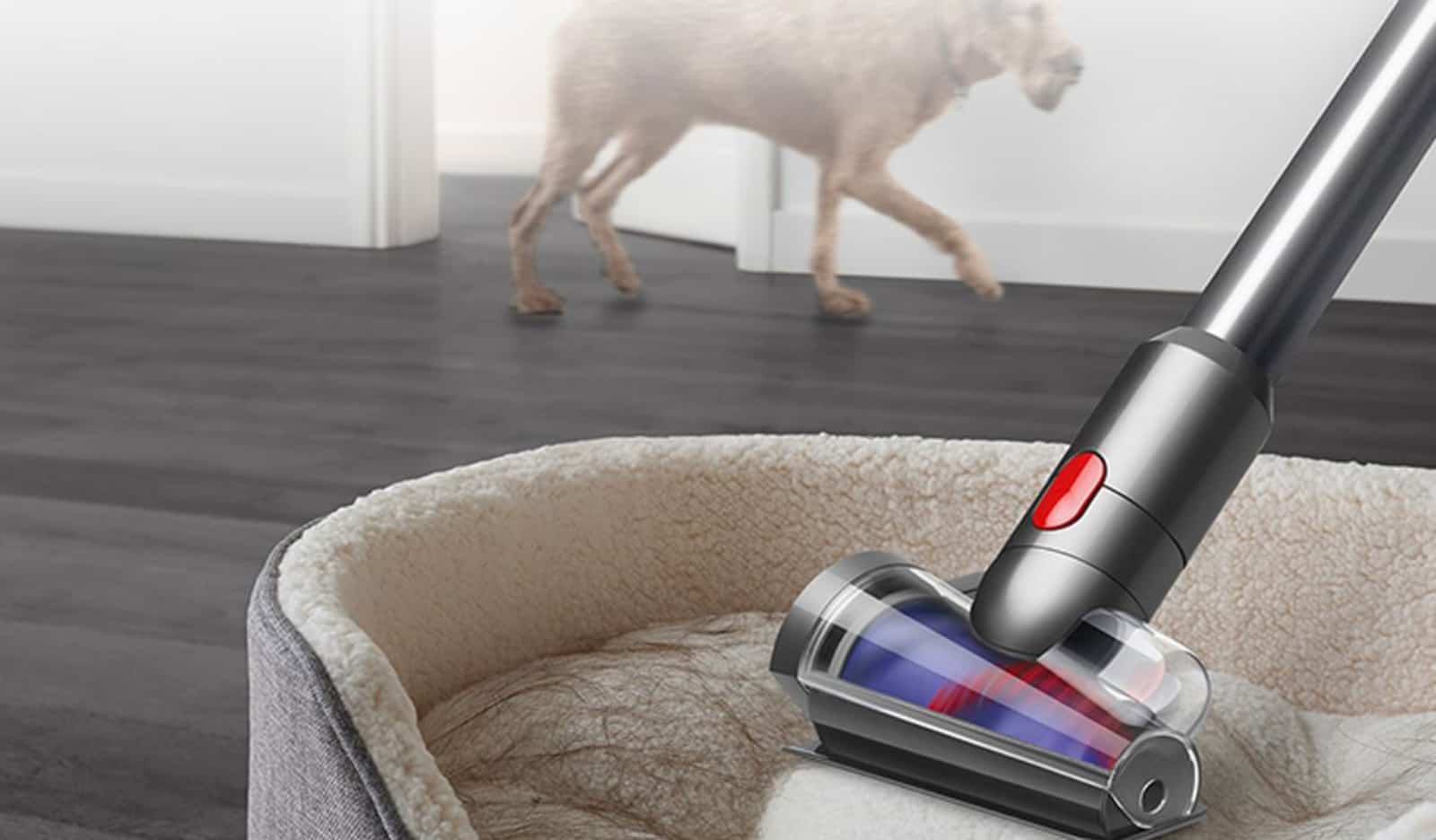 Dyson has also brought in another accessory meant to work with hair of all kinds, be it human or dog hair, which basically solves the problem of hair tangling around vacuum brush bars.

It happens even on Dyson cleaners, but the Hair Screw Tool, which comes with the vacuum, uses a cone-shaped Archimedes screw to pick up the hair and move it out of the head and into the rest of the vacuum cleaner. Essentially, it wraps the hair on in the tool before releasing it at the end, causing it not to tangle. 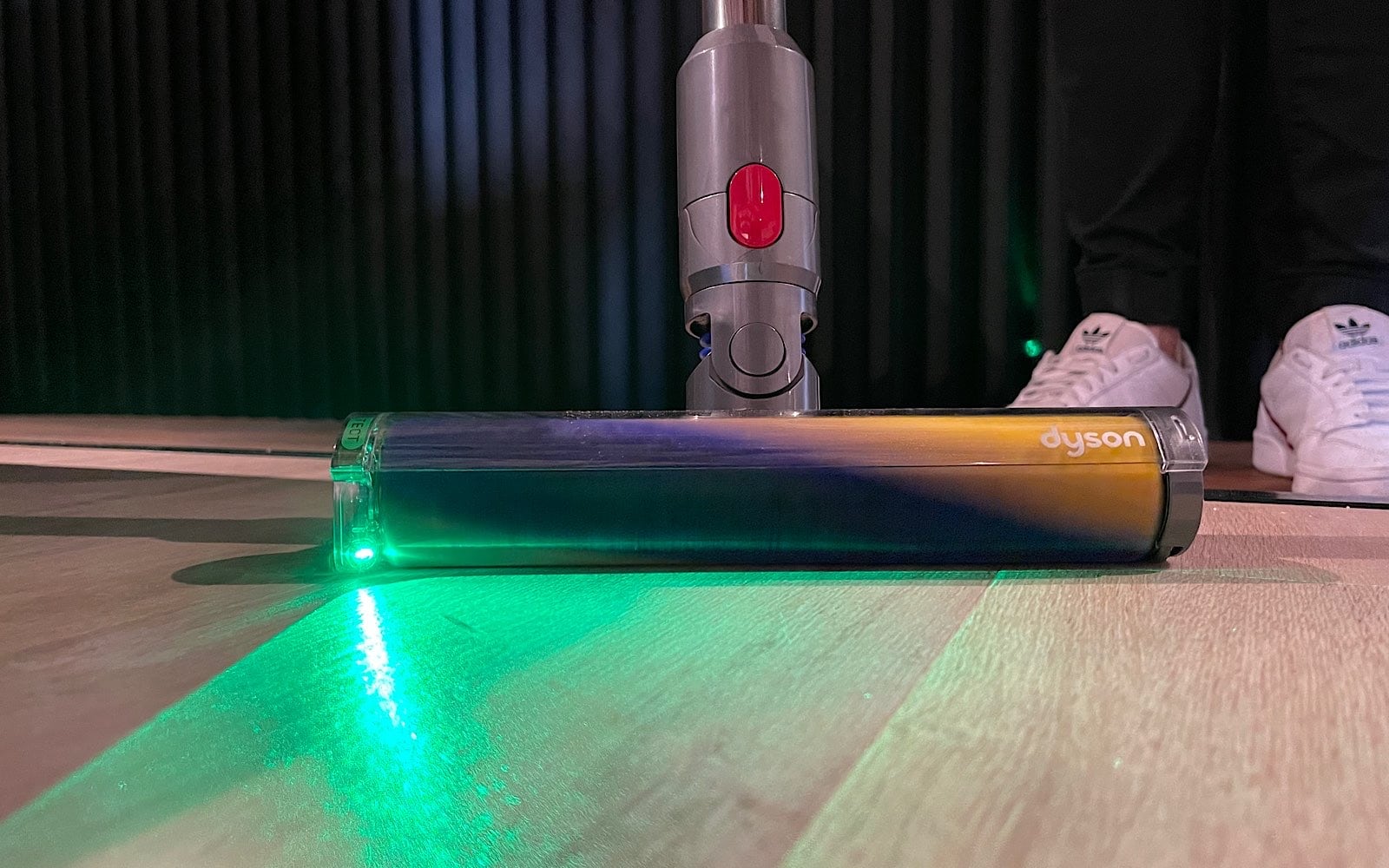 You’ll find that accessory in the Dyson V15 packs, and possibly a smaller vacuum, with the V15 coming in two variations in Australia, plus one different vacuum.

A smaller version will also be coming later on the Dyson V12 Detect Slim, which includes the laser and the sensor, but in a smaller size.