Fancy capturing a 3D VR film? You might want to see Canon’s approach, as it builds a lens that looks like eyes.

Even though the revived world of virtual reality hasn’t quite taken off the way many have expected, it’s still growing.

Headset makers like Oculus still releases new headsets, and this evolving form of entertainment hasn’t just seen games made for purpose roll out, but also productivity apps, with ways to connect remotely in a virtual world part of what is adding to growth.

Entertainment, however, still seems like one of the main motivations behind checking into the world of VR, and while games can be that reason, there’s also movies. At one point, that was propelled by 3D movies, but with the technology disappearing from TVs over the past decade, VR movies are gradually entering the frame, even if it comes with two viewpoints overlapped.

VR films can be captured in a multitude of ways, whether with a series of cameras set up in a 360 degree setup getting video from all angles, a single 360 degree camera doing that job, or from a camera setup designed to emulate eyes, capturing with two cameras from a left and right set of lenses in much the same way a 3D film might be captured, but from a single viewpoint. VR cameras aren’t typically stuck to one lens and viewpoint the way regular filmmaking relies on.

As such, directors and filmmakers aren’t limited in how they choose to tell a story in virtual reality, and it’s something Canon is joining this week, launching a lens for its EOS R mirrorless cameras that looks just like that: two eyes. 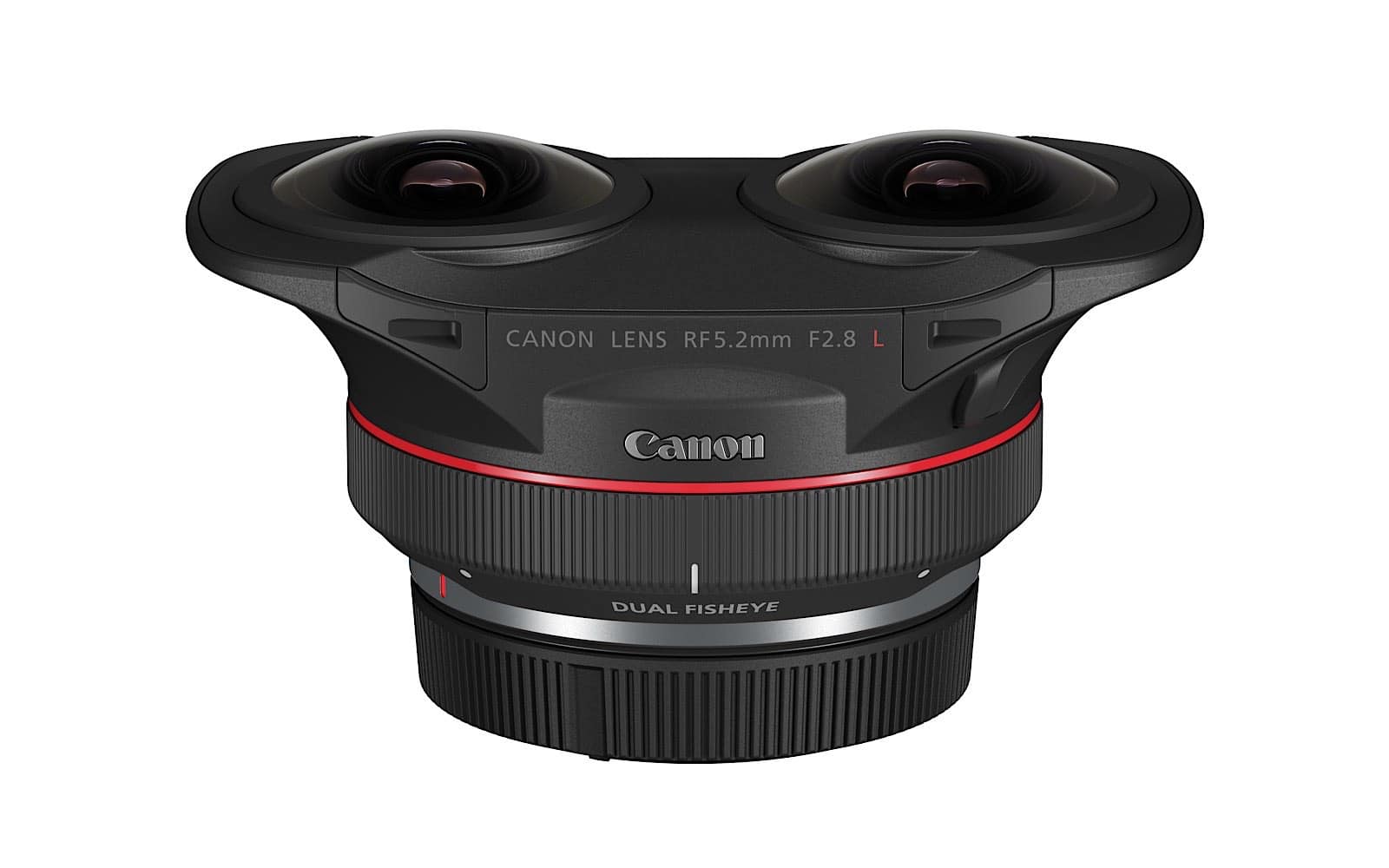 Looking a little like something out of the Star Wars universe, or even something from one of the aliens in Neill Blomkamp’s District 9, Canon’s RF 5.2mm F2.8 dual fisheye lens brings two very wide-angle lenses together to capture 180 degree video and images to a camera. It’s effectively two 190 degree lenses connected at eye-distance, instead of needing two cameras mounted side-by-side to capture the same style of footage, the approach that’s typically needed if 3D and VR is being used.

Canon has said the design of the lens isn’t just limited to a wide-angle look, however, with a 60mm look that makes the capture from its dual-fisheye VR lens more like capturing a portrait-friendly 60mm, not far from the 50mm many people may use. And it’s one that’ll see photographers and filmmakers capturing video able to control lens aperture in sync with each other, with both lenses keeping the lighting consistent in the process.

The cameras being used to make this work are from Canon’s EOS R series, the company’s full-frame mirrorless system, which can support up to 8K in the EOS R5, and potentially means will see two sets of images shot in the one 8K format for proper 3D and VR video export, though one that will also mean the video production suite needs a plugin for. As such, Canon already has a plugin for Adobe’s Premiere Pro, but Canon’s local arm hasn’t yet said whether the same is true for Final Cut Pro.

However the lens does provide a bit of a change for those intent on dabbling with 3D and VR filmmaking some more, and is set to arrive in Australia later this year, with the Canon RF 5.2mm F2.8 dual fisheye retailing for $3849 locally. 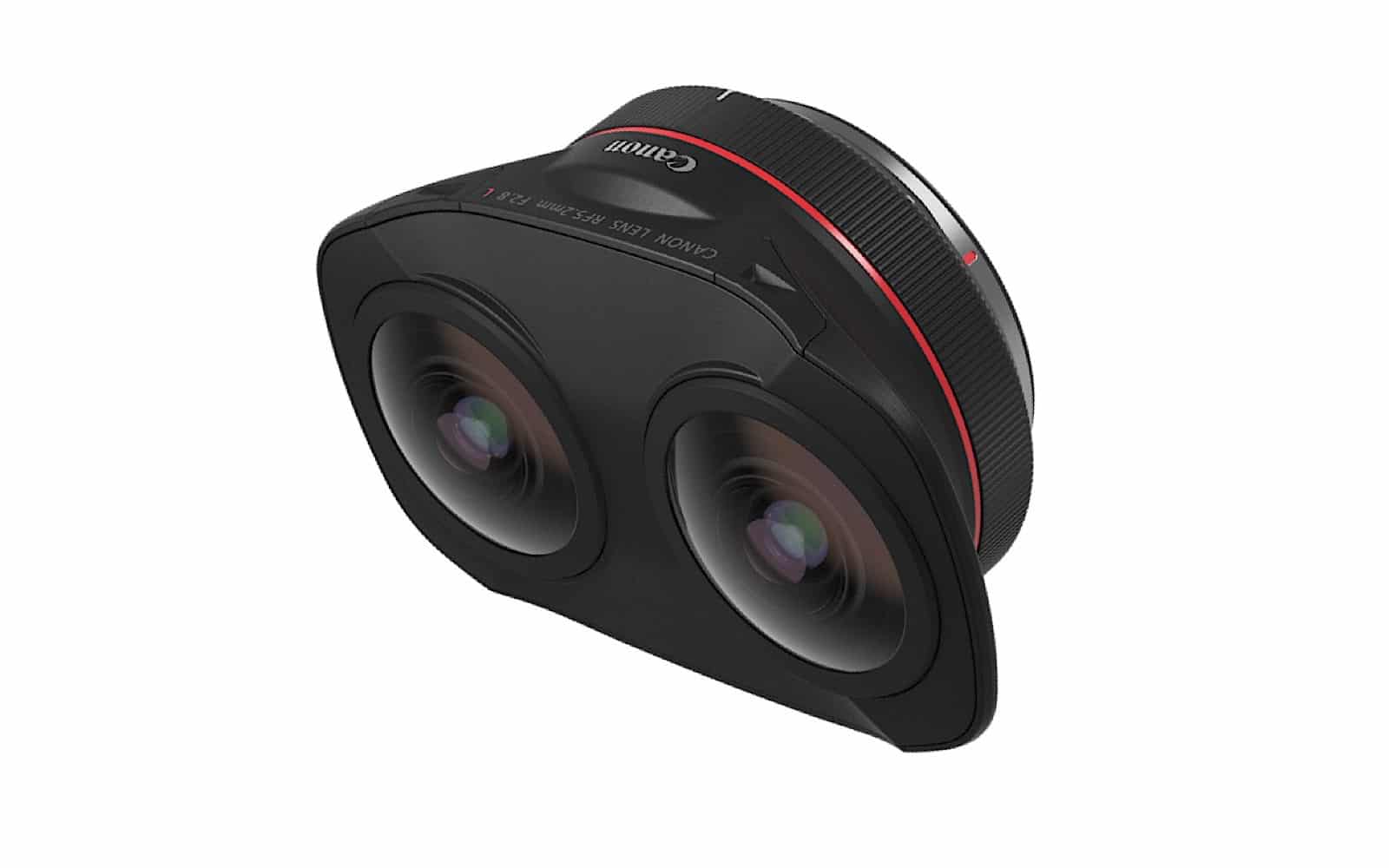