Most wearables can track your health, but with Withings’ latest, it goes the extra mile for patients and their doctors.

CES 2020 is on this week, and while we’ve already had a few gadgets hinted before the Las Vegas technology expo had begun, one is making a rather curious splash because of what it can do.

Launched at the media-only CES preview event that is CES Unveiled, Withings’ latest health gadget is a watch designed to offer a little more than the conventional step tracking and exercise analysis.

That’s been very much the domain of more or less every wearable, and even Withings’ own in the past. The company’s take on the smartwatch has been designed more like a conventional analogue wristwatch, but with a small screen for smart notifications. These designs haven’t stopped Withings from being able to offer pace, distance, or elevation tracking, with heart rate monitoring also included.

However the latest Withings smartwatch aims to go even further.

Called the ScanWatch, it’s a take on the health-based wearable that looks like a regular watch, and yet includes a medical grade electrocardiogram (ECG) and a blood oxygen sensor (SpO2).

Neither of these technologies are necessarily new to smartwatches: the Apple Watch Series 4 and Series 5 both have an ECG, while the Fitbit Ionic and Charge 3 both include an SpO2 sensor, though none have made use of the technologies for diagnosis, which is exactly where Withings is working.

For the ECG, Withings is making it work to detect atrial fibrillation, also known as “afib”. These are the abnormal heart rhythms that can be used to diagnose conditions, with this watch able to alert you of the fact, and then communicate the findings to a doctor or medical professional.

Sleep apnoea tracking works in much the same way, with the Withings ScanWatch using the blood oxygen sensor and algorithms to monitor when sudden drops of oxygen have occurred during sleep, recording the data which you could then take to a medical professional. 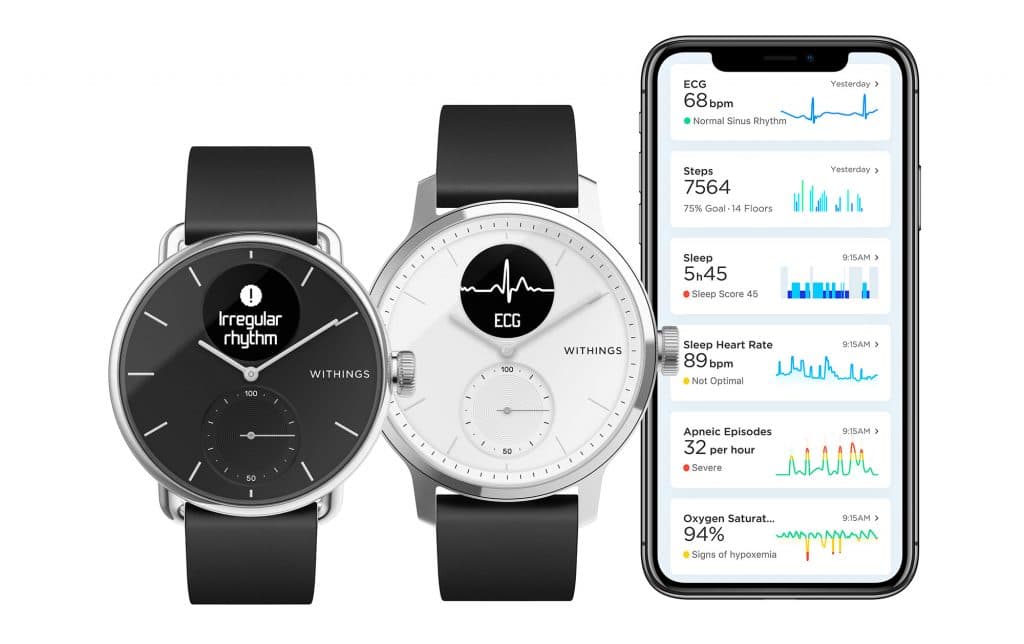 The data is stored in an app and can be exported for clinical use, or even emailed directly to a medical professional, while the Health Mate app Withings uses can also provide the information to users, complete with vibration alarms when certain situations are detected.

It’s definitely an intriguing watch, and one that doesn’t look like a conventional smartwatch, which is indeed a nice point. Withings is going more for a look that is both analogue and yet with a touch of digital, using the digital crown as a controller to take you back and forth through the menu items seen in the window of the ScanWatch.

“ScanWatch is our most ambitious medical tracker and purposely designed to detect the early presence of AFib and sleep apnoea – two related issues that are extremely common yet largely undiagnosed, despite their known impact on multiple health conditions,” said Mathieu Letombe, CEO of Withings.

Hands-on with the Withings ScanWatch 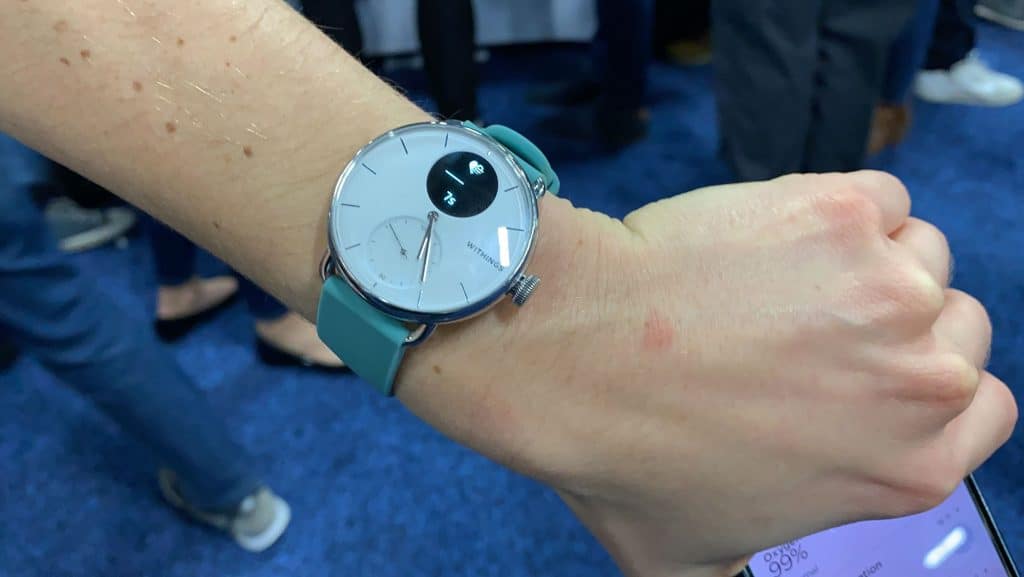 Easily one of the more interesting wearables we’re hearing about, the ScanWatch is not just interesting, but also quite elegant.

In an age when you can more or less expect a screen on a wrist, we’re fans of the obviously analogue approach Withings has gone for, and intrigued by the extra technology.

Of course you might never have any of the extra signs that are detectable by the Withings ScanWatch, and that’s a good thing. If you never have a heart rate determined to be too rapid or too slow — like tachycardia (fast) or bradycardia (slow) — or even the irregular heart rate that is atrial fibrillation, you’re doing well. However being able to detect it is a useful feature, and one that makes it ideal for many. If you’ve ever had a heart condition before, Withings’ ScanWatch is essentially an early warning system.

The same goes with the heavy snoring that can stop you breathing in your sleep. Apnoea isn’t a condition everyone has, but it is one that an estimated one billion people worldwide suffer from. The ScanWatch can’t treat sleep apnoea as such, but it can alert you to it, and provide the information to a doctor for diagnosis.

It’s one step above Fitbit, which for years has been hinting that it has a sleep apnoea diagnosis system in test for Fitbit devices, but has thus far not left beta and made available publicly.

Wearing something like this on your wrist that tackles both issues is a very curious idea, and one that looks pretty good, too.

Throw in a solid 30 days of battery life, and you have a recipe for what could possibly be one of the more innovative smartwatches on the market. 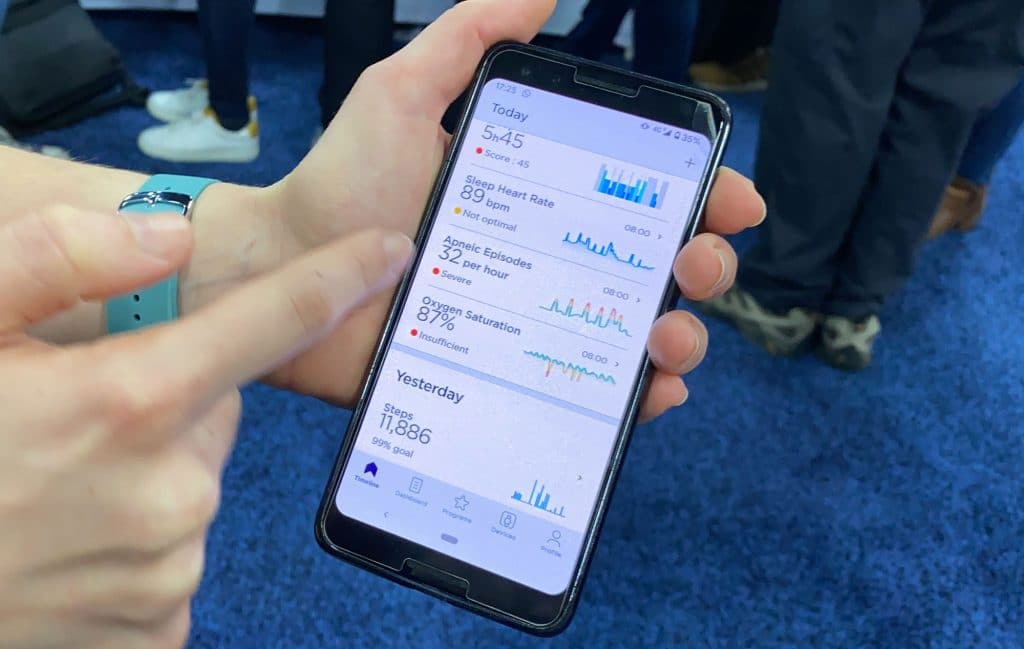 It’s worth noting, however, that an Australian release of the Withings ScanWatch is reportedly dependent on medical clearance, which in Australia typically means getting the Therapeutic Goods Administration (TGA) to approve the sale of your technology. So far, that has meant the Apple Watch has gone on sale, but the ECG in the Series 4 and Series 5 models has been disabled due to a lack of TGA approval.

As such, if Withings can get that approval, the company says that local availability for the Withings ScanWatch doesn’t appear to be too far, with April to June the release window, and a price of $479 in Australia.

We’re told you can expect silicone and leather wrist bands, with the ScanWatch available in two sizes, 38mm and 42mm. 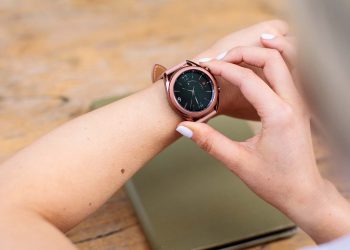