Huawei is back with some pretty heavy camera artillery, but Australia won’t be seeing one phone built to impress.

With phone launches more or less delayed since Mobile World Congress was cancelled back in February, it’s not surprising to see announcements round about, well, now. A month late is what many expected when the world’s biggest mobile phone show was cancelled due to the at-the-time concerning coronavirus pandemic, and now that it’s a full blown crisis and practically everyone is being told to stay home, now seems to be the time when companies are talking about what’s coming.

If you liked Huawei’s last batch of P-series photography focused phones — and we sure did — there’s quite a bit to look forward to, and a few you may be less enthused by.

Let’s start with the positive: what’s coming to Australia in the P40 range.

The good news is that the next P-phones are coming to Australia in the 6.1 inch P40 and the 6.58 inch P40 Pro, devices that offer similar concepts packaged in slightly different ways.

In that big Huawei P40 Pro, you’ll not only find a bigger screen, but also a 50 megapixel F1.9 standard wide camera, a 40 megapixel F1.8 ultra-wide similar to what was on the Mate 30 Pro, plus a 12 megapixel F3.4 telephoto camera, and a depth sensor, more or less enhancing what the P30 Pro offered last year. The sensor is also bigger again, and Huawei is suggesting support for up to 50x digital zoom, which may be just a gimmick, but will likely see some sharpening and stabilisation to help you out with that.

Cameras are the main focus of Huawei’s P series, hence what the “P” stands for, though the smaller P40 is similar but not the same.

In the Huawei P40, the camera lose megapixels and light to work with, because while Huawei uses the same 50 megapixel F1.9 standard camera, it switches to a 16 megapixel F2.2 ultra-wide and 8 megapixel F2.4 telephoto (3x optical) camera, while also ditching the depth sensor, notable differences to be sure.

That tells you that if you want the better camera prowess in the P40 range, you probably need to look to the P40 Pro, though Australia is missing out on a P-phone which is even better.

Australia misses out on the P40 Pro+

Huawei also has a plus-sized P40 Pro model that is is releasing, just not in Australia. 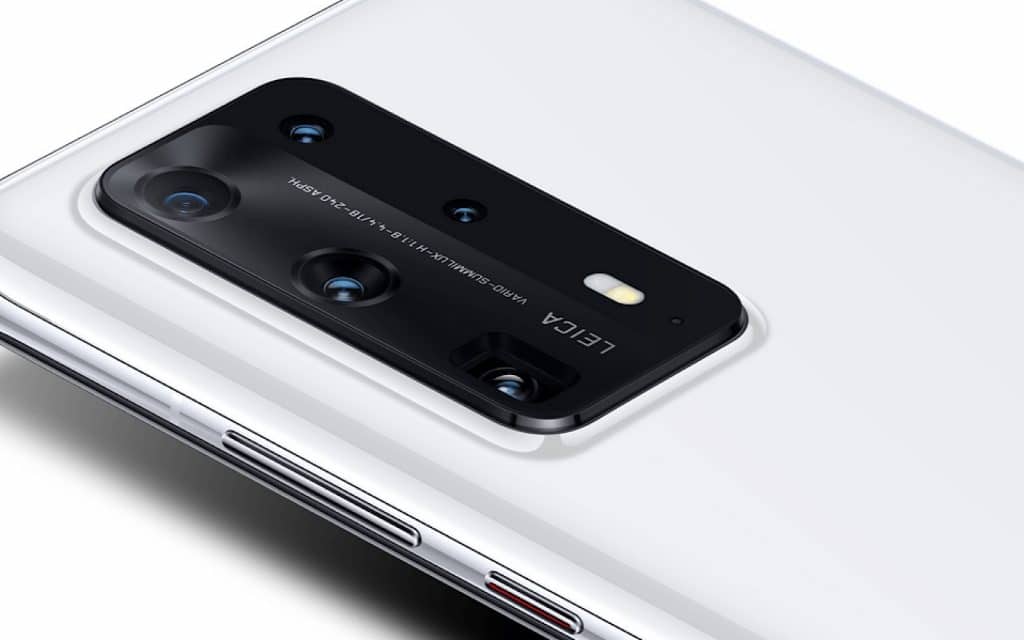 As such, the P40 Pro Plus offers that same 50 megapixel F1.9 camera from the entire range, alongside the 40 megapixel F1.8 ultra-wide, plus an 8 megapixel F4.4 “SuperZoom” camera delivering 10x optical and an 8 megapixel F2.4 capable of 3x optical, and that 3D depth sensor used for portrait images.

Essentially, it’s an even more impressive camera sporting five modules, and Australia won’t be seeing it.

The camera prowess is software, too

Huawei’s phone cameras are helped along by the camera expertise Huawei has, alongside the companies it partners with to make them a reality. In these phones, that includes Leica’s expertise in glass and lens quality, and Sony for its sensor design and development.

However software plays a part, too, and so there’s not just image stabilisation, but also photography AI that can pick up on motion detection for posture and facial tracking to deliver clearer photos of people. Alongside that, there’s something Huawei calls the “Golden Snap”, which sounds like a new version of its Master AI to deliver the best shot automatically. There’s even talk of inclusion for Huawei’s AI being able to remove “photobombs” with unwanted parts from the background of the images, though this was something Huawei didn’t provide sample images for. 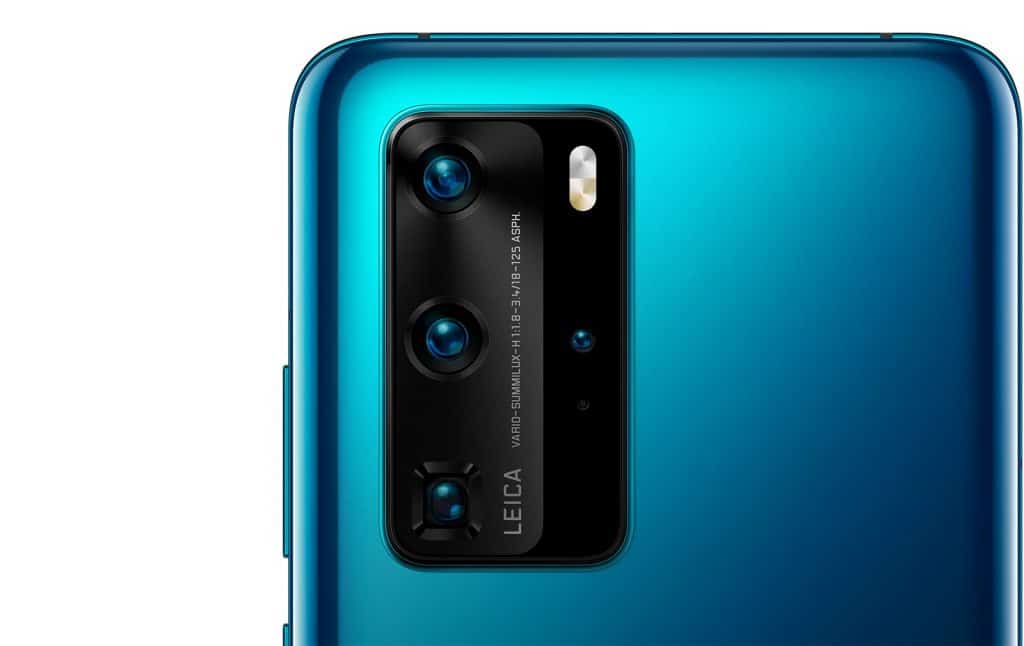 Otherwise, the specs of the P40 and P40 Pro are more or less identical, so you’re not going to see major differences, outside of water resistance.

In both, there’s Huawei’s Kirin 990 5G processor, boasting eight cores of processing power, alongside 8GB RAM and 256GB storage. The storage isn’t locked down, either, with expandable memory supported by Huawei’s “NanoMemory” NM card slot that doubles up for the use of nanoSIM.

Mobile connections for that nanoSIM is handled over 4G and 5G, network dependent, and there’s support for WiFi 6, meaning both P40 and P40 Pro support the range of WiFi connections across 802.11a/b/g/n/ac/ax.

All of this sits under a large glass screen, with the P40 Pro sporting what the company calls an “overflow” curved display without an obvious bezel, though you can see a little more of the black bezel clearly on the P40.

The catch: still no Google services

As intriguing as these updates and upgrades to last year’s P30 series sound, they still come with a catch, which will likely be noted by a market as dependent on Google’s apps and services like Australia: no support from Google.

Thanks to last year’s trade issues between the US and China, Google still can’t provide support for Huawei’s devices released from May 2019 onwards, which means the P40 and P40 Pro both lack support from Google Play Services.

The P40 range still runs Android, as it’s an open source platform that anyone can make work for their needs. Huawei is using its own take on Android, running EMUI 10.1, which is based on Android 10. However just because it runs Android, doesn’t mean it has support from Google to do so, and as such, there’s no link to Google’s apps and services in the Play Store.

That does mean Android apps won’t run on the P40 and P40 Pro; rather, it means that Android apps can run, but you may have to get them through Huawei’s AppGallery app store, or something else, such as the Amazon app marketplace.

Huawei does include a conversion app that you can use to copy your existing phone data over with, and it will check the apps on your existing phone and provide ways to get them on the new Huawei phone if they exist, such as grabbing them directly through the website, one of the options available for some apps.

But some apps in Australia won’t run at all, thanks to their dependency on Google services, such as Google Maps. As such, Uber tends to not work at all, at least in our test on the Mate 30 Pro, thanks to its reliance on Google Maps, meaning both Uber and Uber Eats are likely out of action if you opt for the P40 Pro, as well as a bunch of other apps.

If none of that is a concern, the good news is Australia will be seeing the P40 and P40 Pro, even if that P40 Pro+ is a no show.

While we wonder why that’s the case when Huawei could have just brought in the P40 and P40 Pro+ (because seriously, why wouldn’t you bring in the best of the bunch over the one that isn’t quite the best), Huawei has announced that both will be available at stores in Australia, as well as Huawei’s Authorised Chatswood Store.

As such, you can expect the Huawei P40 from there, plus Harvey Norman and Mobileciti priced at $1099, while the P40 Pro will see release at $1599 from JB HiFi and Officeworks alongside those other retailers. Pre-orders reportedly start now, with availability scheduled from April 16.