You can use Google to search for nearly anything in the world, and now you can search for 3D concepts to bring into your world.

The giant library that is the internet can find you all sorts of things, from the latest news to the review of a device you’ve been interested in to something you want to buy to the latest song from that new band you like. It’s a big place, and you can find pretty much anything and everything online, because all you have to do is search.

We all know how to do that — how to search — and while your options for searching are more varied than simply “Google”, it is the one most of us rely on in the regular day to day.

And this week, Google is gaining a feature: support for the 3D objects and augmented reality.

You might typically think of search as something that provides information in text, audio, or even video form, but Google is throwing in support for 3D information in its latest update, and allowing that 3D information to bleed into your own world as you search.

It’s a concept being rolled out by Google’s search team, with support for augmented reality (AR) imagery on mobile devices for select searches.

In the beginning, Google is including augmented reality imagery from Biodigital to show the human body in AR on a phone, while another company, Visual Body, has teamed up Google for augmented reality models of plant, animal, and bacteria cells that can be found in search. There are also numerous other models, including animals and spacecraft, and they’re all a little more interactive than a standard 3D object, and on your phone, thanks to how this whole Google 3D AR search thing works.

So how does it work?

Well, Google tells Pickr that you simply an Android phone or tablet with Android 7 or higher, or an iOS device with iOS 11 or higher, and Google search on a web browser. 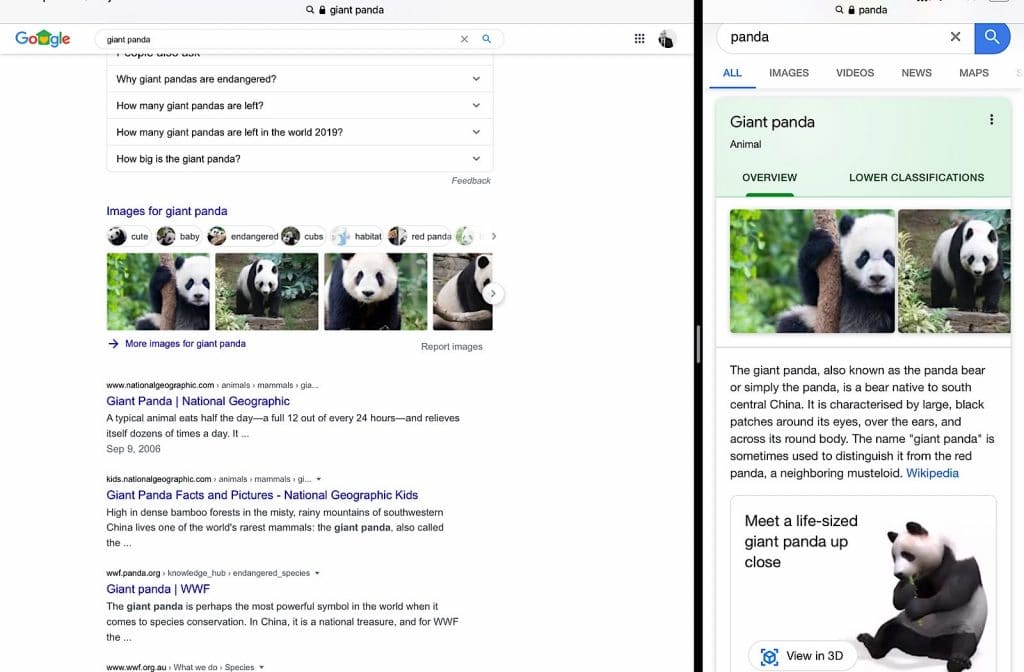 Interestingly, while we were able to get this working on the iPhone, iPadOS doesn’t seem to qualify, or not completely. In fact, if you want to see searches in 3D on the iPad, you’ll need to shrink the window just a bit, as the slim mobile view seems to be the only way to get Google to load the 3D link on the iPad, though it won’t work with augmented reality on the iPad at this time, only the iPhone.

Android devices may well be a touch more open, and tablets do seem to be supported there, but your computer probably won’t be supported just yet.

Not all the features exist across operating every platform, though, as recording your experience may not be active on iOS just yet, and neither will support for an augmented reality carousel that allows the 3D content to be swiped left and right to jump between models on your device.

However it should be working now for select searches, most of which appear to be scientific in nature. If you’re wondering just what they are, start searching on your phone and see if you can find the searches that reveal 3D content.