Samsung times a smartwatch for October

It’s not just a new phone that Samsung showed off this week, with a smartwatch in both small and large.

As much as we love our Samsung Gear S3 smartwatch — and we do, it’s pretty much the default smartwatch when we’re using and testing Android phones — it’s beginning to get a little long in the tooth.

That’s hardly surprising, mind you: the Gear S3 was first shown around this time in 2016, making it due for an upgrade, and come October, it will be getting one.

Gone is the name “Gear”, and instead the new watch will be joining the “Galaxy” family, as Samsung announces the “Galaxy Watch”, a circular smartwatch protected by Corning’s scratch-resistant Gorilla Glass that will come in both 42mm and 46mm options.

The Galaxy Watch still goes with Tizen as its operating system, but you’re not likely to notice that, as the app on both Android devices like the recently announced Galaxy Note 9, as well as iOS devices aims to control what goes on the device.

We’re told that will include wellness apps aimed to monitor stress and sleep, with a health and fitness side that can track 39 workouts and look at calorie intake.

It’ll talk to other services, too, such as Samsung Pay for paying with your wrist, Samsung Flow for logging into your computer with a Samsung device, and Spotify, the latter allowing you to take Spotify songs offline so you can just go running with your Spotify account and a pair of wireless headphones, because Bluetooth is here, too.

In fact, while Bluetooth will be the main way the Galaxy Watch will connect, there will be a variation that even supports an eSIM, allowing you to take the Watch and remain connected on the go without the phone.

“The Galaxy Watch is a beautifully crafted timepiece that delivers on both style and functionality,” said Samsung Australia’s Garry McGregor.

“The network connectivity of the cellular Galaxy Watch will give people the freedom to leave both their phone and wallet at home while staying connected through voice and data, along with the benefits of Samsung Pay,” he said.

Samsung has also paid attention to the design, worth more watch faces and more watch straps, while retaining the circular rotating bezel for controlling the Galaxy Watch, though there is still a touchscreen, and it’s AMOLED, too. There’s also water resistance along for the right, and a variation of Corning’s Gorilla Glass (DX+) to protect the screen, giving it military specifications to resistance to the world. That doesn’t mean it won’t break if you abuse the watch, but means it will hold up to the MIL-STD-810G, the standard tested for military conditions by the US army.

There’s a 42mm version and a 46mm version, and while they both look similar, the 42mm has a 270mAh battery while the 46mm almost doubles it at 472mAh.

That might just seem like random numbers, but the reality is that it changes the battery life, with the 42mm Galaxy Watch expected to get two days of typical usage before needing a charge, while the 46mm jumps to closer to four. Low usage will improve the battery life of both of them, but it’s an important factor given there’s such a difference in battery life between models.

Pricing isn’t completely solid yet, either, though we suspect we’ll get a firmer grasp on that as we push towards October.

As such, you’ll find the Galaxy Watch in stores from October 4, with the Bluetooth model arriving from $549, while the cellular eSIM variant will be from $649. Our guess is those are the 42mm models, with the larger battery-packing 46mm model likely costing a little more. That said, we’ll let you know when we know. 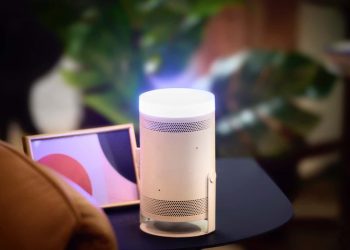 Samsung makes the cinema anywhere in The Freestyle