Science fiction always paints a more distinct picture about what the world will look like in the years to come. Whether it’s dystopian or utopian, our cities have the ability to look, feel, and function much differently from the way they are presented in 2017, and according to a new spot of research from IKEA, they have room to move.

This week, everybody’s favourite Swedish furniture giant (because who hasn’t owned a Billy at one point in time?) has released a look into what the home of the future will be like, basing the concepts not so much on the fanciful visions of a science fiction writer, but from the living situations that we will likely end up having found from its research.

Revealed in IKEA’s “People & Planet Positive Report”, IKEA suggests that our Australian population of a good 24 or 25 million will grow to over 70 million in the next hundred years, with only a third of locals believing we as a population will be ready for the changing scenarios that this change in population will bring.

And what changes will arise?

As the population increases and the space gets smaller, IKEA suggests that homes will become shared living spaces, shifting to an increase in high-rise housing with facilities that will be shared between homes.

Think of this as a laundry that is shared for space requirements, much like an apartment block might have now, or a garden that grows produce and yet is shared in the community. Some units might already have something like this now, but this is expected to grow in number, and IKEA suggests it could even include shared cooking spaces, almost as if our homes would be boxes inside of a small community of utilities.

“As our cities become denser, this presents an enormous opportunity to actively create the cities we want, as opposed to inheriting the legacies of previous generations,” she said.

In many ways, that opportunity is about shifting perceptions, because according to the research, only a quarter of people are open to sharing cooking with others in the same community, while just over half believe co-living communities won’t work locally.

As cities grow in size to support a massive population, this will test city development, and not just where we live, but how we live, also.

“There’s a very real chance that as a society, we may not be that realistic with our vision of the future of our society,” said Ringvall.

“A population growth of this magnitude will most likely result in the rise of new cities, as housing developers begin to build upwards to make the most out of the space available. It’s likely that as we embrace this high-rise, co-living lifestyle, our home furnishing choices will be focused towards easy to use, convenient and multi-purpose products designed for compact living and that facilitate shared living,” she added.

That means the stuff around your home will likely change with the amount of space available, and that’s a shift the world is beginning to make now. While many of us have libraries of media, some of us are moving on, skipping the DVDs, Blu-rays, CDs, and books for a streaming library that can come right off the hard drive, internet, and consumed on a portable device.

And that’s just one change. Remove the kitchen from your home and many of the appliances go with it, while your TV could end up being a spot of wallpaper thanks to the technology found in OLED, something LG is beginning to dabble with.

While it’s unlikely we’ll start seeing shared spaces in an evolved city for at least 50 years, it could be an indication of what’s to come, especially as more people crowd in, and that’s something IKEA is playing with the idea of.

Almost everything in your home is likely connected or represented by furniture in some way, and when you’re talking about enclosing living quarters and making everything smaller, that means furniture has to get smaller with it, building it into walls, changing the materials to be more sustainable over a long period of time, and integrating mechanisms that would normally take space, such as device chargers built into tables.

You can see these links in the green products IKEA has started to work on, joining other eco-friendly manufacturers in finding future-friendly solutions to the modern day dilemma of “too much”, a problem that will no doubt rear its head in a world overtaken by a growing population.

As to whether IKEA’s vision of this world is spot on, we won’t know for another 50 to 100 years, but cities can only grow to a certain point without evolving, and at one point, something will change. Will it be micro-homes in a small community of kitchen and garden? Only time will tell. 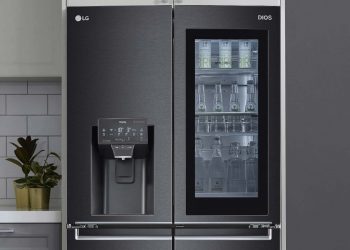 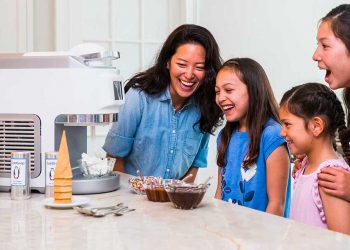 ColdSnap shows the next pod appliance might be for ice cream