Owners of the iPhone might also have an Apple Watch and earphones, and may even want to charge them all up at once. Fortunately, there are gadgets made for just that, such as the HiRise 3.

What is Twelve South’s HiRise 3?

Another of the many bedside and desk-bound charging stands you can find, the HiRise 3 is a stand that does three things.

Made for the MagSafe technology Apple introduced in the iPhone 12, it can hold and charge any model from the iPhone 12 range or the iPhone 13 range — and potentially the iPhone 14 and higher — while also charging an Apple Watch up top and a pair of wirelessly charged earphones on the base at the bottom.

From the side, it looks a little like the head of one of the R0-GR droids in Star Wars, but it’s a plastic charging stand for the iPhone, Apple Watch, and a pair of earphones. 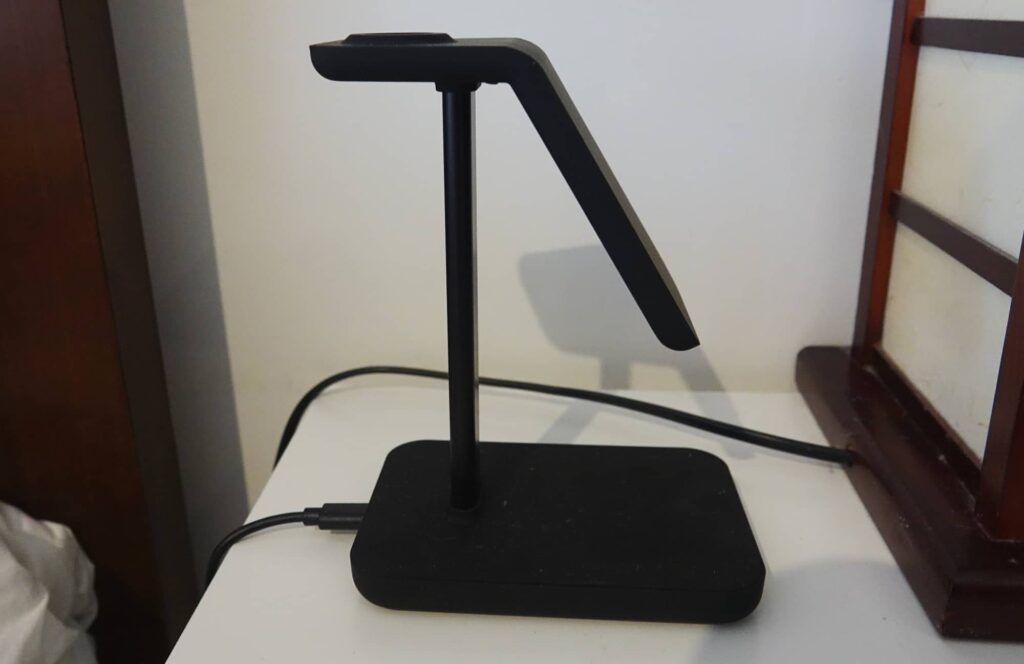 In theory, that means the HiRise 3 can charge three of the most commonly associated gadgets an iPhone owner could own, covering phone, watch, and earphones, though the tech is specific on the first two, and less specific for the last one.

For the phone side of things, the HiRise 3 will only charge an iPhone 12 or higher, covering iPhones as small as the iPhone 12 Mini and as big as the iPhone 13 Pro Max, and any other iPhone 12 or 13 model. Basically, you need something with MagSafe. That’s the requirement, that’s what you need.

But at the bottom, the charging pad there can charge anything else, albeit much more slowly. The base of the HiRise 3 is meant to charge any wirelessly charged gadget, but primarily built for earphones, such as the AirPods 3, though it could just as easily charge the also-wirelessly charged Sennheiser Momentum True Wireless 3 and Sony’s WH-1000XM5, to name a few.

It can even charge phones, something we found when charging up a Google Pixel 6 Pro, though the charging pad below offers only 5 watts of power, with 3 watts for the watch and a max of 10 for the phone. 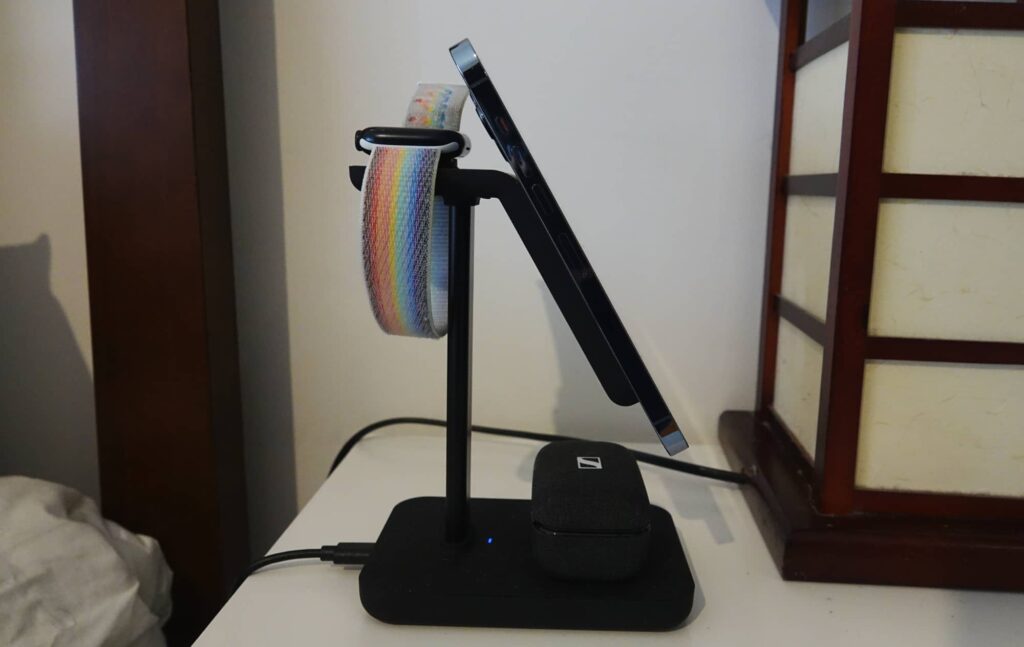 MagSafe can technically charge with more power than what Twelve South gets out of the HiRise 3, so while this desk stand does the job, it’s not quite as fast or powerful as a standard MagSafe connector, it seems.

Technically, Apple rates MagSafe on its phones for as much as 15W of peak power across the regular and larger models of iPhone, while the iPhone 12 Mini and iPhone 13 Mini bring that back to 12W.

In the HiRise 3, that maxes out to 10W regardless of what you’re using, so you’re not going to get quite the same performance even if the stand has no problem charging the phone up a little more slowly, which it does perfectly fine.

But there are things we’d add to the package, such as a power pack and a more powerful charging pad.

You don’t get the charging brick with the HiRise, even though you need it. The stand really needs 20 watts to be effective, and you don’t get that with it, so either buy one or take it out of an iPad box, if you happen to have one lying around.

Or maybe even grab one of the GaN charging bricks, an optional extra for gadgets in your life, but necessary for the HiRise 3.

You sadly won’t find an extra USB port at the back, which isn’t a huge issue for iPhone owners relying on the Apple Watch and AirPods, but if you use a different watch, you are a little out of luck. 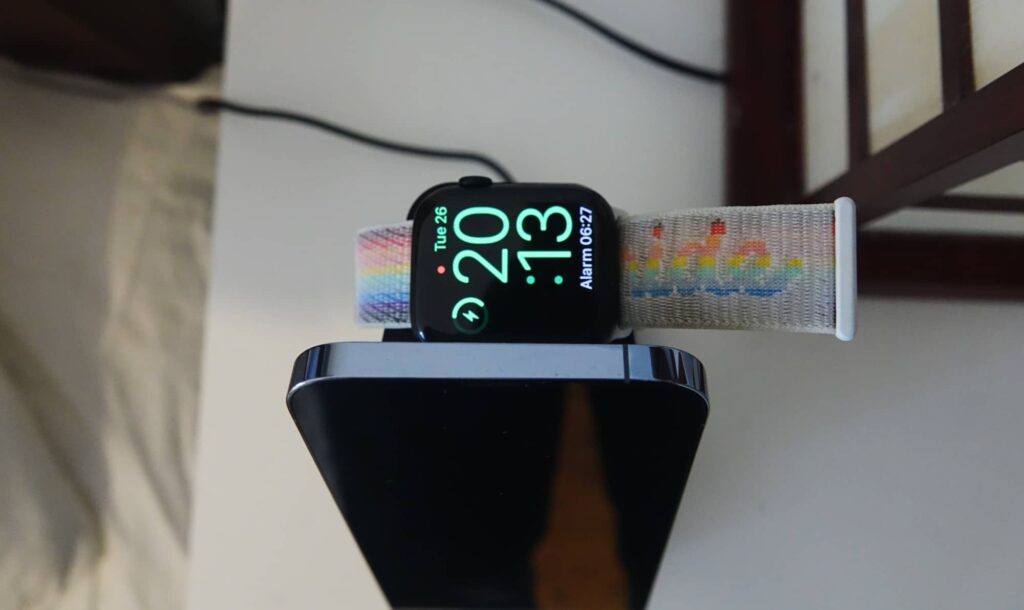 For those who do use the Apple Watch, we weren’t major fans of the Apple Watch pad placement on the HiRise 3, because it means you don’t get the nightstand charging feature.

That little extra for the Apple Watch turns the wearable into a sort of bedside clock at times, letters glowing when you tap it, but you can’t do that with the HiRise 3 because rather than position the watch screen out, it aims it up, and you can only see it if you’re looking down at the watch, which bedside stands don’t typically sit lower, more level in height with the bed.

We’re not entirely sure how Twelve South would have fixed this with the HiRise 3 design, and it’s not a total dealbreaker, just something to be aware of: nightstand is useless on the HiRise 3, unless you tower over the HiRise 3 as you sleep.

For $179, though, the Twelve South HiRise 3 is actually a decent value, especially given older models from competitors without MagSafe still charge close to the same cost.

As it is, you can find a Belkin model for close to what Twelve South charges, and it doesn’t feature the magnetic awesomeness that is MagSafe.

However, that power pack would have helped make the value more obvious, more evident, because without it, you may find you still need to spend another $29 on a 20W charge pack from Apple, or anyone else. That makes this stand a $200 spend all up, something to consider, for sure. 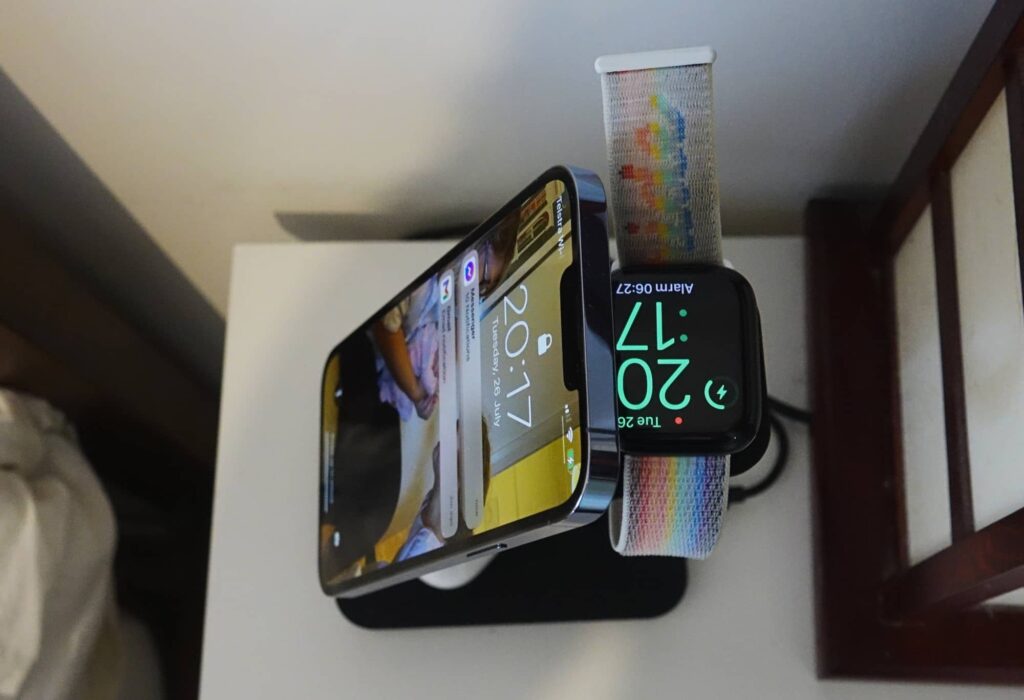 One of the many desk and bedside-bound accessories to untangle the mess of cords and cables no doubt culminating in your life, Twelve South’s HiRise 3 hits a few goals, most notably in design.

It’s small, minimalist, and one of the most compact and svelte ways we’ve found a phone charging stand to sit, shrinking the space needed for charging three gadgets in a positive way.

But it doesn’t get everything right, missing out on one feature of the Apple Watch and skipping out on a power pack you actually need to make the whole thing work.

Frankly, if Twelve South were to include the power pack, we’d probably give the HiRise 3 a little more leniency, because it does most things right, offering folks in the Apple world a compact stand that does most of what they’d want. Without it, and the HiRise 3 feels like it needs a little more refinement, if only to nail value that little bit better.

If the price falls or the power pack is included, the HiRise 3 is definitely worth a look, especially if minimalism is your thing. Right now, we’d wait until either happened, because they’re the aspects of the whole thing that let the package down slightly. 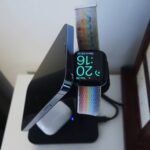 Twelve South HiRise 3 MagSafe charging stand
The good
Pretty much an all-in-one charger for Apple people
Minimalist design
One of the more compact charging stands for your desk or bedside
The not-so-good
There's no power pack in the box, and it needs a 20W minimum to work
MagSafe doesn't charge at full power: 10W compared to MagSafe's 15W max
Can't see Apple Watch nightstand mode
4