If you own a the pint-size Mac Mini, you might want more ports and storage. Fortunately there may be a solution in the Satechi Mac Mini Stand and Hub. Is it worth the money?

As excellent as the hardware and experience is, buying a Mac can come with a caveat or two, namely port selection and storage. You’re often given a fixed amount of ports, while the storage is soldered in place, forcing you to buy accessories and peripherals to deal with both.

That’s just part and parcel of extending a Mac these days, and while we expect you’d need to with a laptop — because it’s portable and can only pack so many ports in — desktops always feel like they need a bit more love.

Satechi might have a solution for the Mac Mini, with a stand that sits underneath the computer, extending the ports through one Type C plug, and even including a place to add storage to your computer. Does it work, and is it the accessory every Mac Mini owner needs? 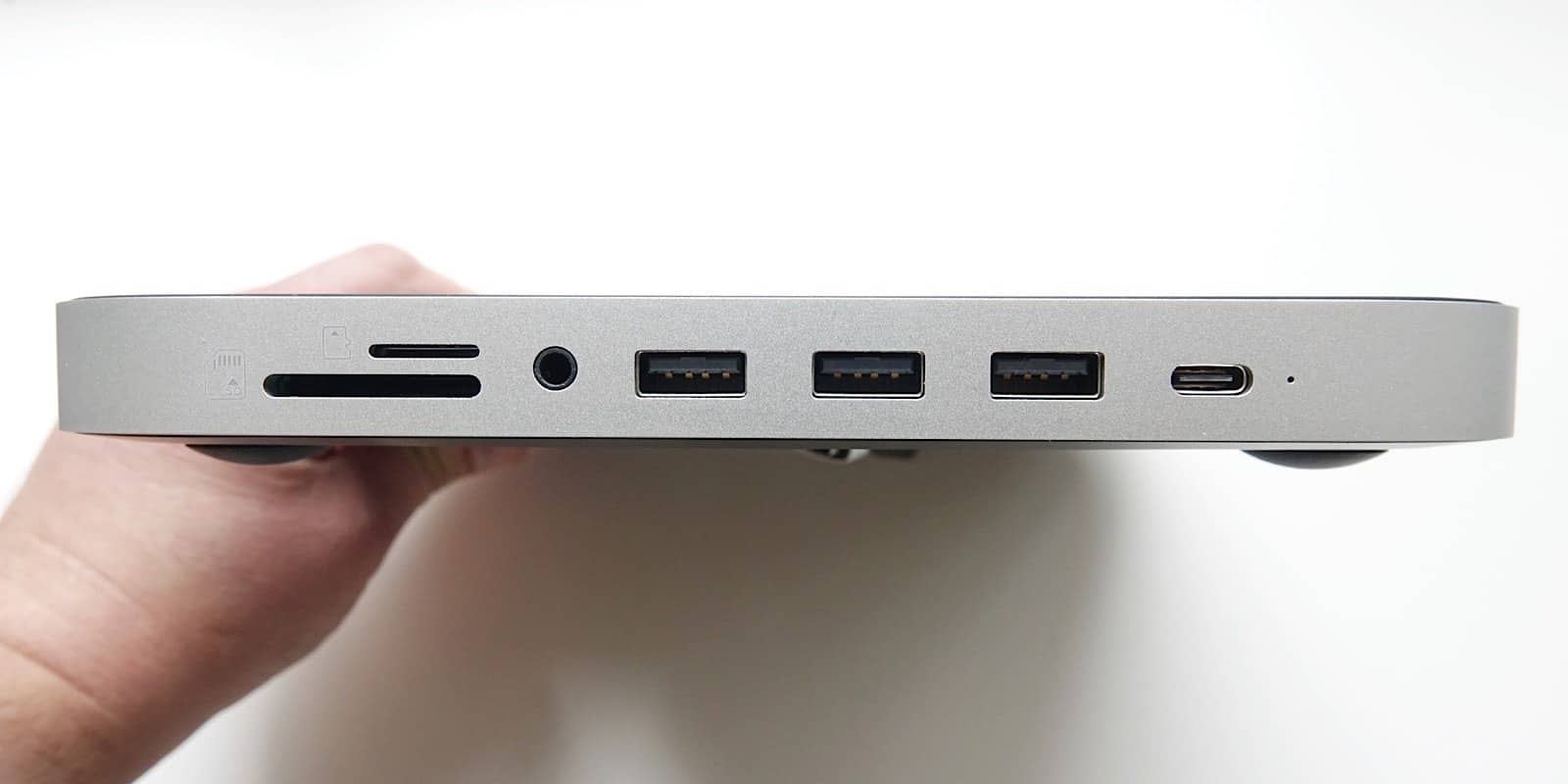 Made from plastic and aluminium, the Satechi Mac Mini Hub is basically a port replicator in a block designed to look like it would sit perfectly under the Mac Mini, complete with an etched out circular design that fits the base of Apple’s pint-sized desktop perfectly.

Satechi has also provided a section underneath where you can plug in a stick of M.2 solid-state storage, arriving with a small screwdriver in the box. 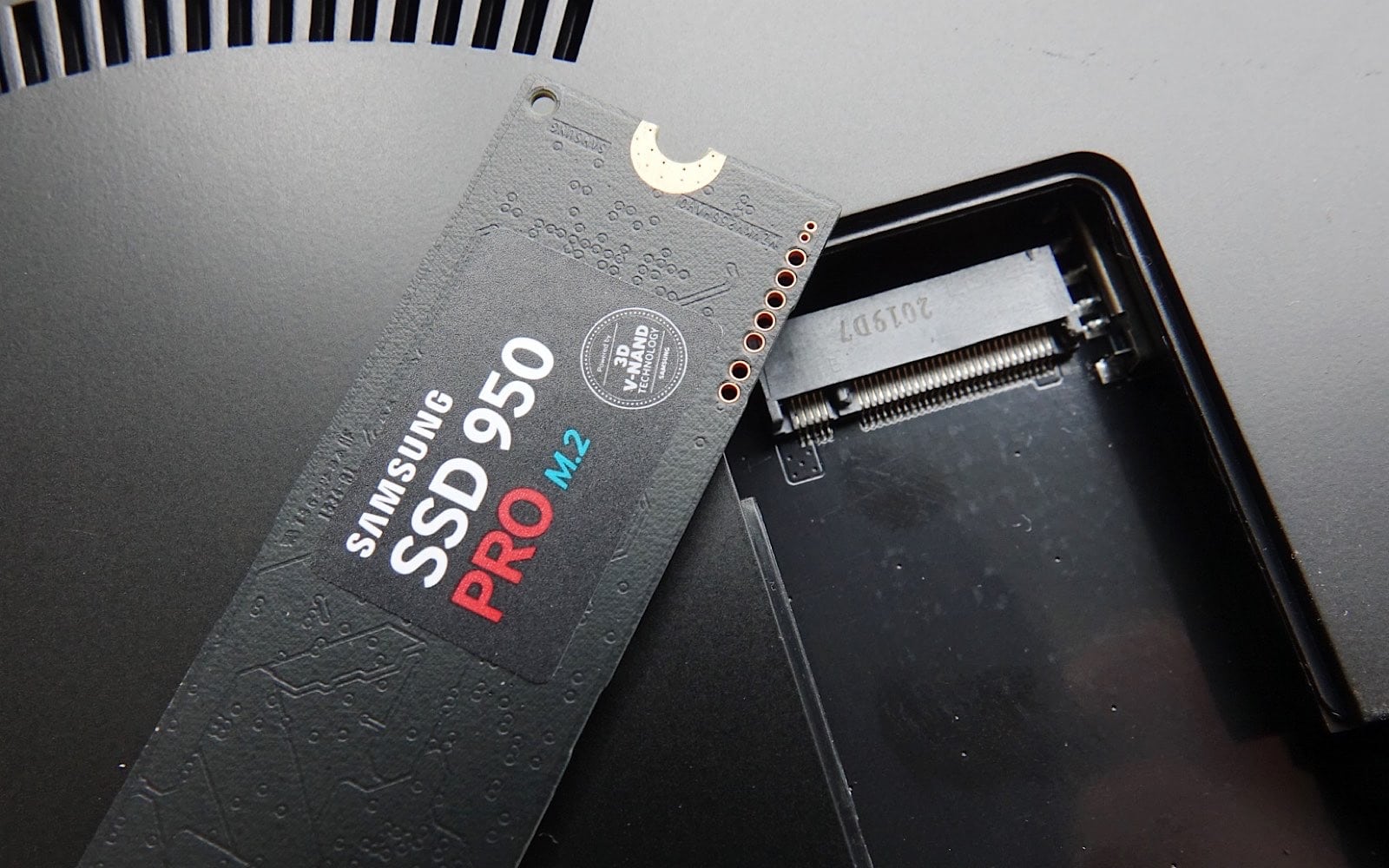 Even though you’ll want to use that screwdriver to connect up a stick of SSD to the storage component, you won’t need tools or experience with tools to work out what the Satechi Mac Mini Stand & Hub with SSD Enclosure does, because it’s all in the name: it’s a stand and hub for the M1 Mac Mini, providing extra ports and storage while also rising the computer slightly higher off your desk.

That’s it. There’s not a lot that’s special about this, and provided you have one of the recent M1 Mini desktops, this will fit and match, arriving in silver just like that one Mac Mini. 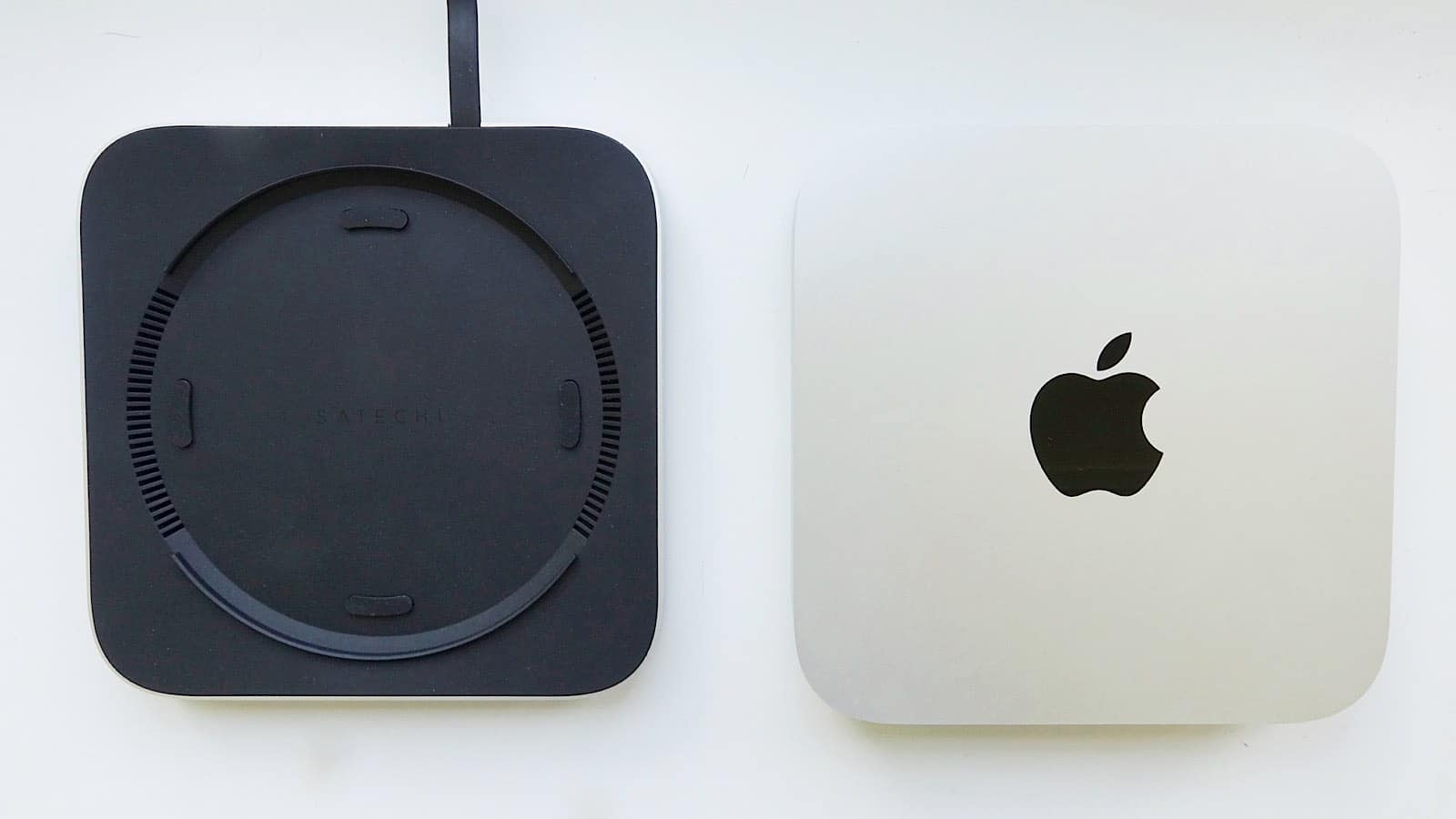 Plug the Mini Stand & Hub in and it’ll spring to life, providing front access for USB ports, an SD and microSD card reader, and a Type C port that doesn’t feel as fast as the ones you’ll find on the back of the Mac.

As a port replicator, Satechi’s Mac Mini hub definitely does what you’d expect it to, though the transfer speed isn’t going to be as fast as if you plugged separate accessories into each of the Type C ports. Rather, it gives you the access for accessories, and that might be good enough for most, providing a few more ports over the two Type C and two Type USB ports the Mac Mini provides. 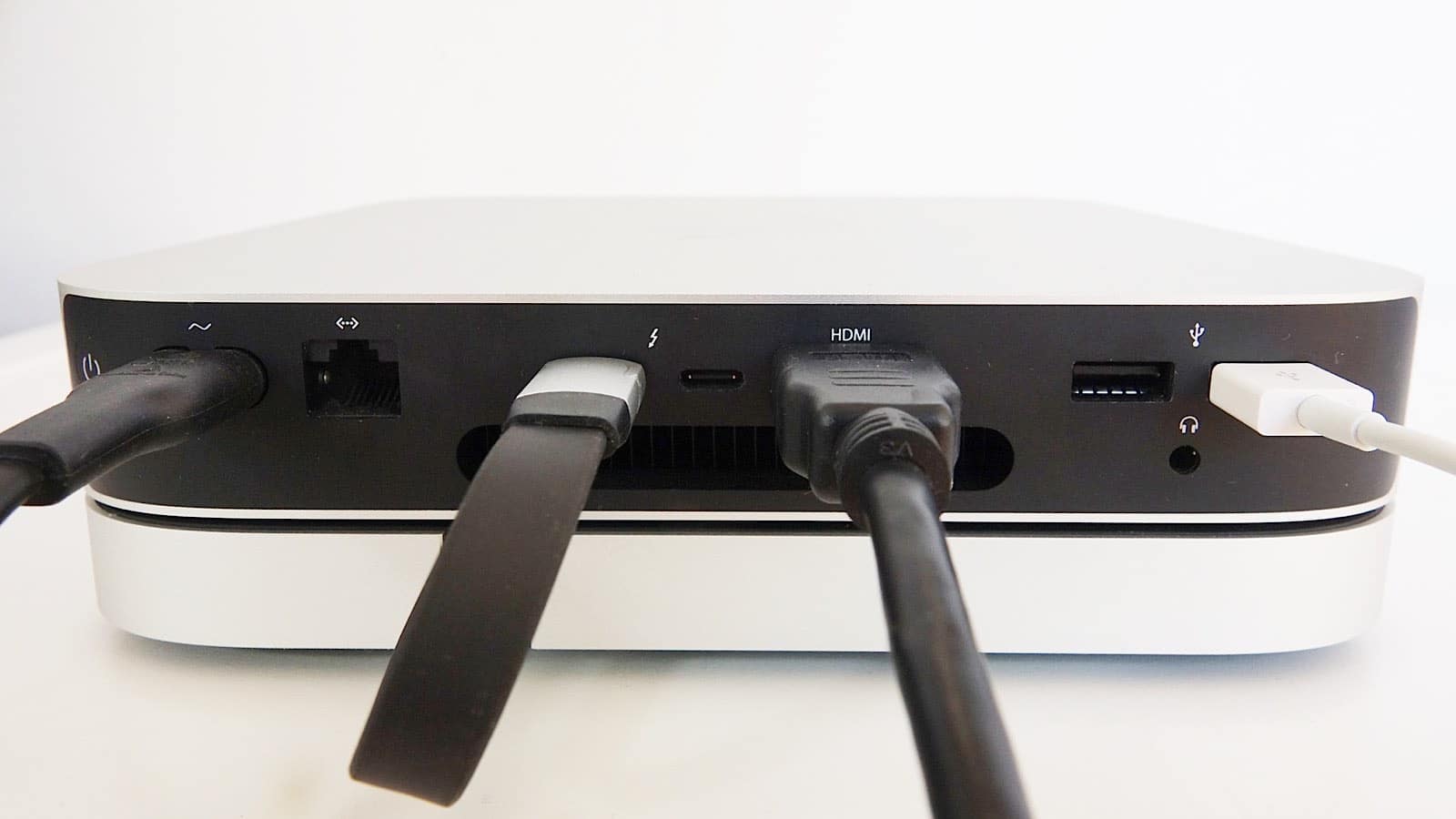 But we’re stuck on what it doesn’t have, which almost feels like points Satechi missed or didn’t think as long about as it should have.

For instance, after our time writing the M1 Mac Mini review, we could tell you just how much the computer needed better speakers. They are genuinely terrible, so while that’s not Satechi’s fault, it’s something a stand and hub could have amended as a feature.

Yet there are no speakers here. Rather, the Satechi Mac Mini Stand & Hub is more or less a Mac Mini-based version of the Satechi iMac Stand we checked out, with USB, card slots, a 3.5mm headset jack, and little to no thought about the product it’s upgrading. At least the iMac Stand lifted it off the ground and provided space underneath as a kinda-sorta extra. Ish.

The other problem is the SSD enclosure you get in the Satechi Mac Mini Stand & Hub with SSD Enclosure, because while that name promises some good things, it’s really half of an attempt, especially these days.

In theory, the SSD enclosure in the Satechi Mac Mini Stand is a great idea: add storage to your fixed storage Mac by throwing in a stick of solid-state storage in the back. Easy, right?

Except for the caveat, that while the Satechi Hub supports the current shape and size of M.2 storage, it doesn’t support the widely accepted NVMe standard found everywhere. That means you have to find an M.2 SSD without NVMe, and let me tell you, that is not an easy task. They are almost impossible to find, with Samsung being one of the last makers, and the chip shortage making the whole thing a touch difficult.

It’s a genuine shame that M.2 NVMe SSDs don’t work here, because they are what’s commonly found. Most of the SSDs making their way out are NVMe, and they’re totally incompatible. We tried two and obviously they didn’t work, and we eventually followed up the problem with Satechi, with a spokesperson telling Pickr that:

“NVMe was not included in this hub because it raised a temperature concern. They attempted this in the design process but upon testing, it was determined that the hub would get too hot so they decided to go with M.2 SATA SSD since it wouldn’t cause the hub to get as hot. We are planning on supporting NVMe in the future, but for the time being, no plans are set to change this product to support NVMe drives.”

That’s bad news for owners of the the Mac Mini Stand now, because it means you don’t get support for the commonly available solid-state tech, though it sounds like it might come in an eventual piece of hardware. Here’s hoping. 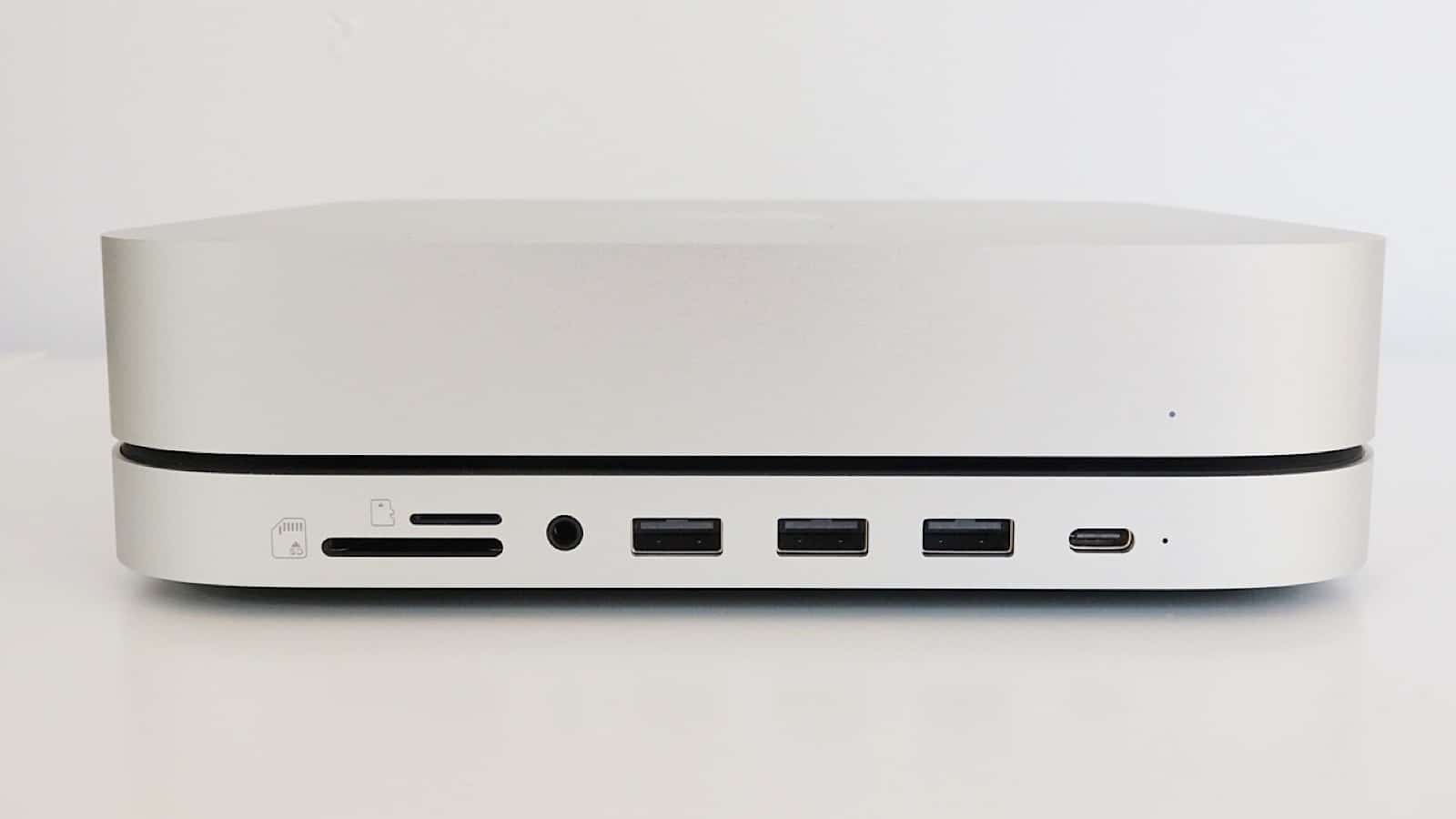 If you can live without the means to upgrade your Mac Mini easily — and frankly, if you bought one after reading reviews, you probably have already committed to that — the Satechi Mac Mini Stand still has some value, getting you those extra ports for $149, in line with what the iMac equivalent from Satechi costs.

Shop around and you’ll find it for around $129 which feels a little better, but we still think Satechi could have spent more time fixing that bonus feature — the SSD — or even found a way to fix Apple’s speaker problem on the Mac Mini.

Frankly, if Satechi included speakers and offered NVMe support with its SSD enclosure, its Mac Mini stand would be a must-have accessory. Without those, it’s more of a “nice to have”. Ish. 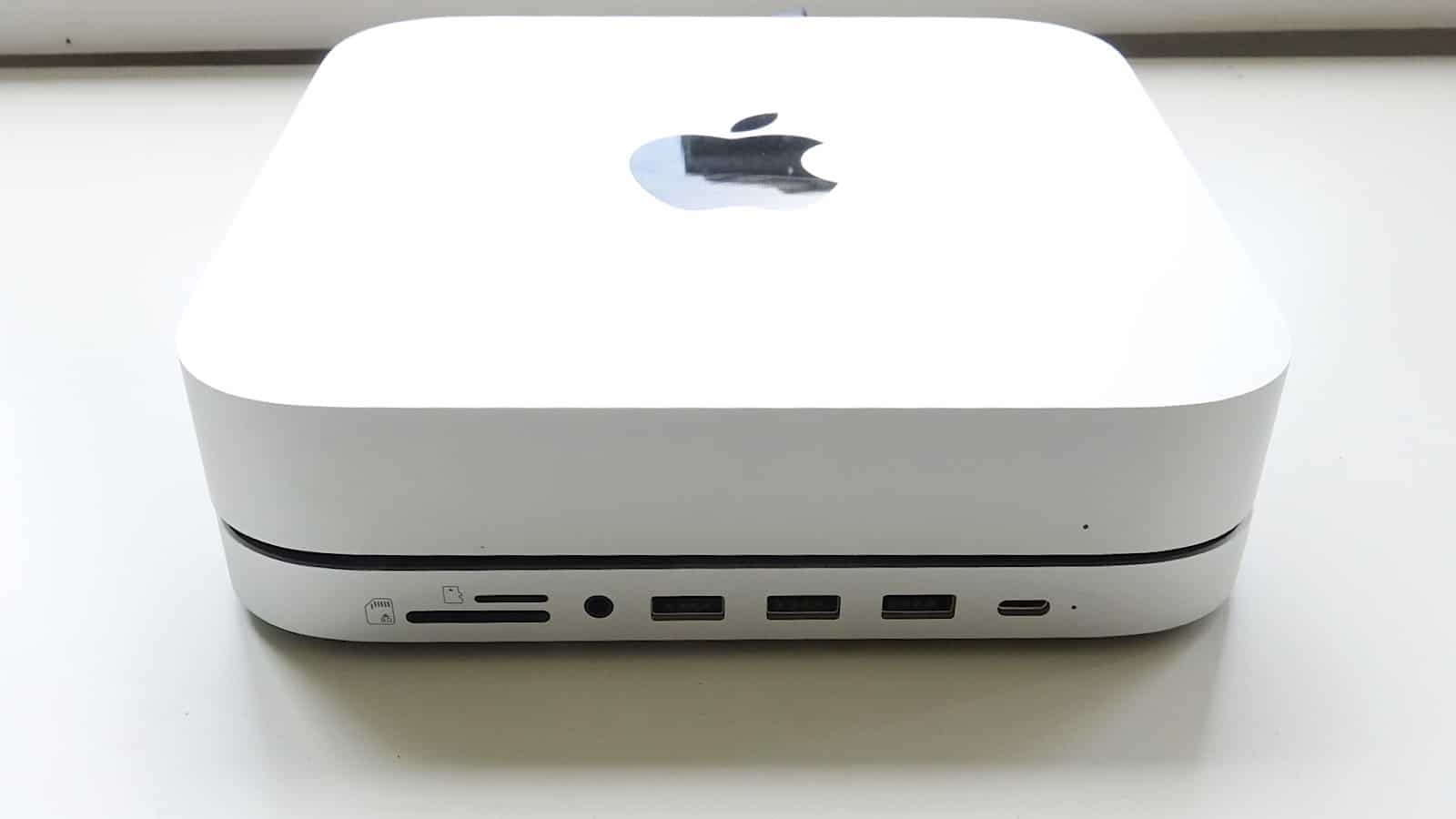 The Satechi Mac Mini stand is a great idea, but lacking a fully thought out reason to exist beyond packaging what Satechi has in other stands for yet another Mac. It’s a totally fine way to add ports to your Mac, but with a few extra tweaks, it could have been even better.

In short, it’s useful but flawed, simply because Satechi didn’t plan for it in today’s world. Without NVMe support, the SSD slot is largely useless, making it pretty much just a port replicator.

If ports is all you need for your Mac Mini, you’ll find the Satechi Mac Mini Stand handy, but we long for what it could have been in the end. 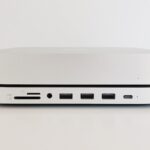 Satechi Mac Mini Stand & Hub with SSD Enclosure
The good
Easy way to add ports to your Mac Mini
Styled to match the M1 Mac Mini
Includes an SD card slot
Decent value
Technically supports an SSD for expandable storage
The not-so-good
SSD hub can't use NVMe solid-state storage which is pretty much the only type you can find
Could include speakers, since the Mac Mini has terrible speakers
3.8