Getting your kids to sleep or even calm down is now in a gadget, as My Little Morphee offers meditation in lots of combinations and choices.

In our highly digital world, it wouldn’t be a surprise if you were looking for a way to cut your kids off from the digital, and find some way to get them to sleep.

There’s just so much competing for the time of our kids, between TV and apps and phones and tablets and games and computers aplenty, and sometimes, you just need a change from it all.

When you’re an adult, you might go read a book or just sit there and close your eyes, self-settling and letting yourself calm down. But kids mightn’t have that built in just yet, and so may need a nice little nudge.

Sound can do this, be it background noise or even a soothing voice guiding them in.

There are certainly apps for this, but if you don’t want to turn to an app, and if you want them to disconnect from the digital and turn to something more physical, you may want to check out the My Little Morphee, what is basically a small sound system for meditation. 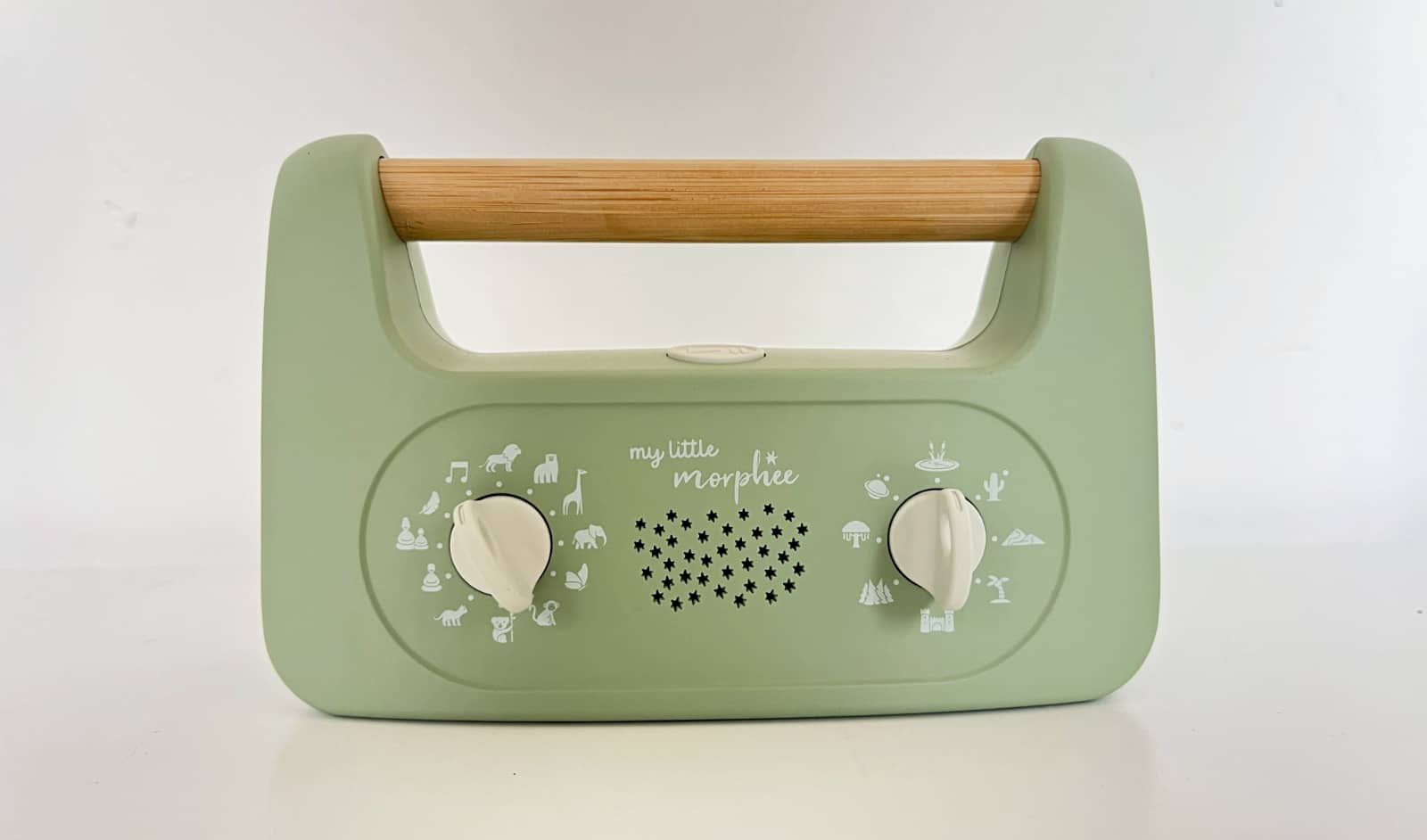 A cross between a white noise generator and a tiny boombox, Morphee’s variation for kids is something unique we’ve not seen in consumer tech quite before. Marrying stories for kids, music, sound effects, and a timer, My Little Morphee is basically a custom media player solely for getting kids to calm down, and maybe even to sleep. We’ve seen sleep tech before, for sure, but it’s mostly for adults and typically not focused on kids.

It’s not a totally new concept, mind you, because there are plenty of apps that do this. You only need to do a search on your device’s app store for meditation apps to get what we’re talking about, though this is a physical incarnation that anyone can use.

In fact, Morphee’s gadget arrives in two models, with a circular clock-style option for adults — the regular Morphee — while this variation is for kids.

Made with plastic and wood, My Little Morphee is light and easy to carry, and so easy to use your youngins wouldn’t mind toying with it either, dialling in what they want to listen to simply by turning the knobs on the front to get one of the many combinations on offer. 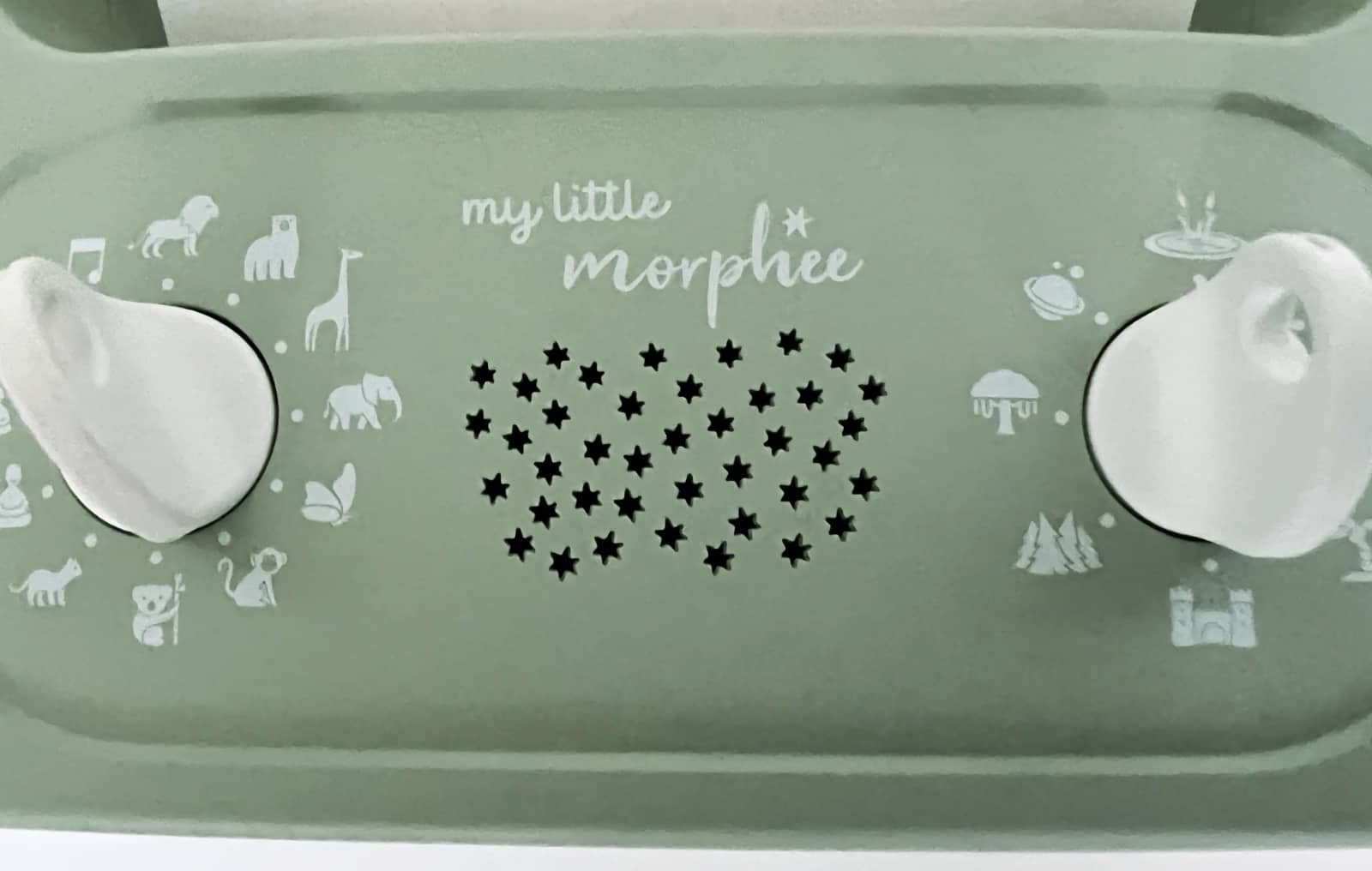 Two main dials at the front allow anyone to choose the type of sound — music, sound effect, and meditative journey about an animal — and then the theme of where that sound takes place — be it the desert, water, forest, an island or even outer space. A play button sits up top, which is what will trigger the sound or even pause it, and combinations can be found by playing around with the dial.

Morphee is about calming kids down, whether it’s using meditative sounds or finding a way to get them to sleep, but allowing them to select how they want to fall asleep.

There are lots of combinations, and even options just for music or sound, with two settings for how long they go for found on the side: the small hourglass offers an eight minute session, while the larger hourglass offers twice the amount at 16. 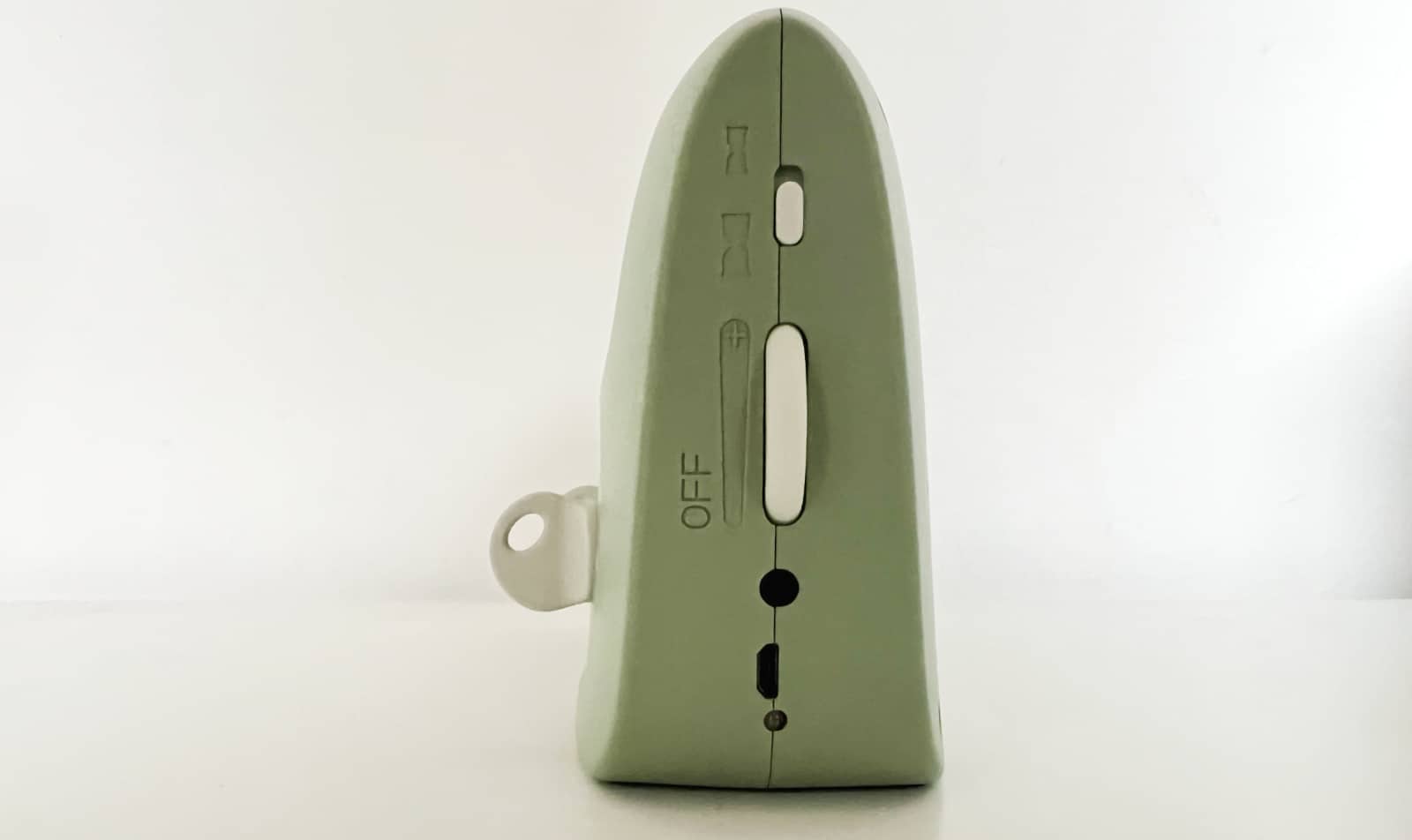 The sound on offer isn’t fantastic, and while you’re getting a fairly wide assortment of stories, sounds, and soundtracks, the sound quality on offer isn’t amazing. A little soft and crackly, you can track that skins like a not so impressive speaker for the efforts, though strangely it doesn’t hamper the experience all that much.

Morphee’s speakers are made to kind of sit in the background, and so they don’t really get in the way. They’re not going to sound as good as a nice speaker or even a great pair headphones, but your kids mightn’t care. They’ll just listen to the sound and hopefully calm down and go to sleep.

If you really needed to, you could plug in a pair of 3.5mm headphones on the side, but given this is more of a background gadget, you probably won’t think to, and honestly, your kids won’t care. It’s not as if kids headphones are typically all that good, anyway.

With a battery supporting up to three hours, My Little Morphee does a decent job of giving kids something easy to use and tactile. This isn’t just another phone, but rather a compact meditation gadget, and one your kids could very well respond to.

Our four year old loved playing with the My Little Morphee, trying all the combinations and getting the sounds she liked most, while our newborn just fell asleep with the music in the background. 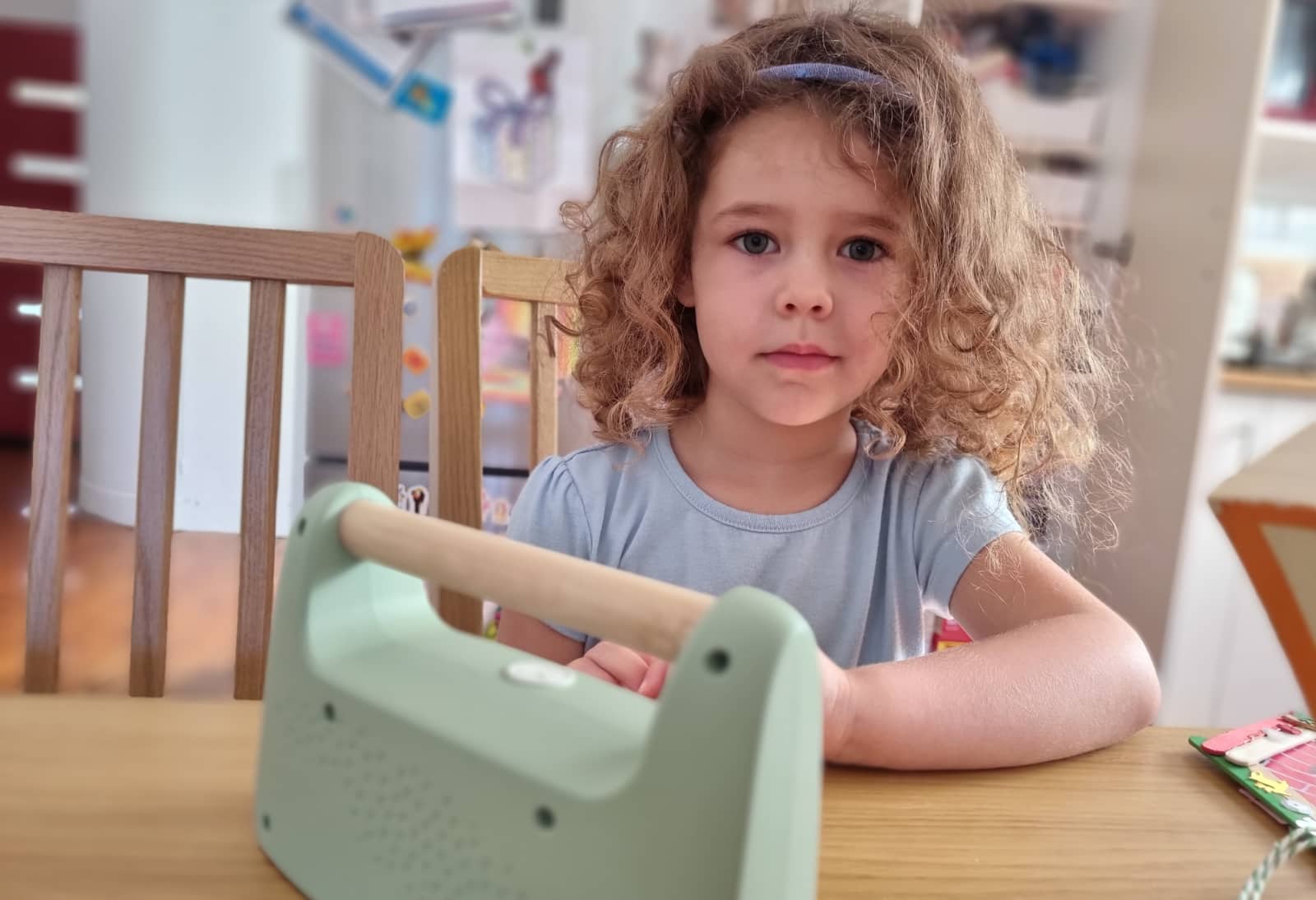 But the one thing missing from it is what it could have been, with more time control. Specifically, you’ll have a choice between a small session and a large session, but those sessions are defined by Morphee.

That’s fine if you don’t mind adhering to the time limits suggested by Morphee, but if you want to use the system as a bit of a white noise generator with lullabies and soothing music and such, you’ll need to keep getting up. All it would have taken was an infinite setting on the side, offering you the full three hour battery with whatever you wanted to listen to, be it the sounds of rain or a simple soothing soundtrack.

There’s a microUSB port on the side to charge it, and that takes a good hour and a half to get it up to “full”, but given how common that charge port is, it would have been handy to keep the My Little Morphee plugged in and still playing audio past the 16 minute mark.

But you can’t do that with the miniature Morphee for kids. You’re stuck at specific settings on what feels like a missed opportunity.

At a hair under $150 in Australia, My Little Morphee is still a neat concept, and one that your kids could end up loving.

It’s easy to use and playful, and if you’ve just about tried everything to get your kids to chill out and sleep, it could be worth an effort to try the My Little Morphee’s compact meditation for kids. 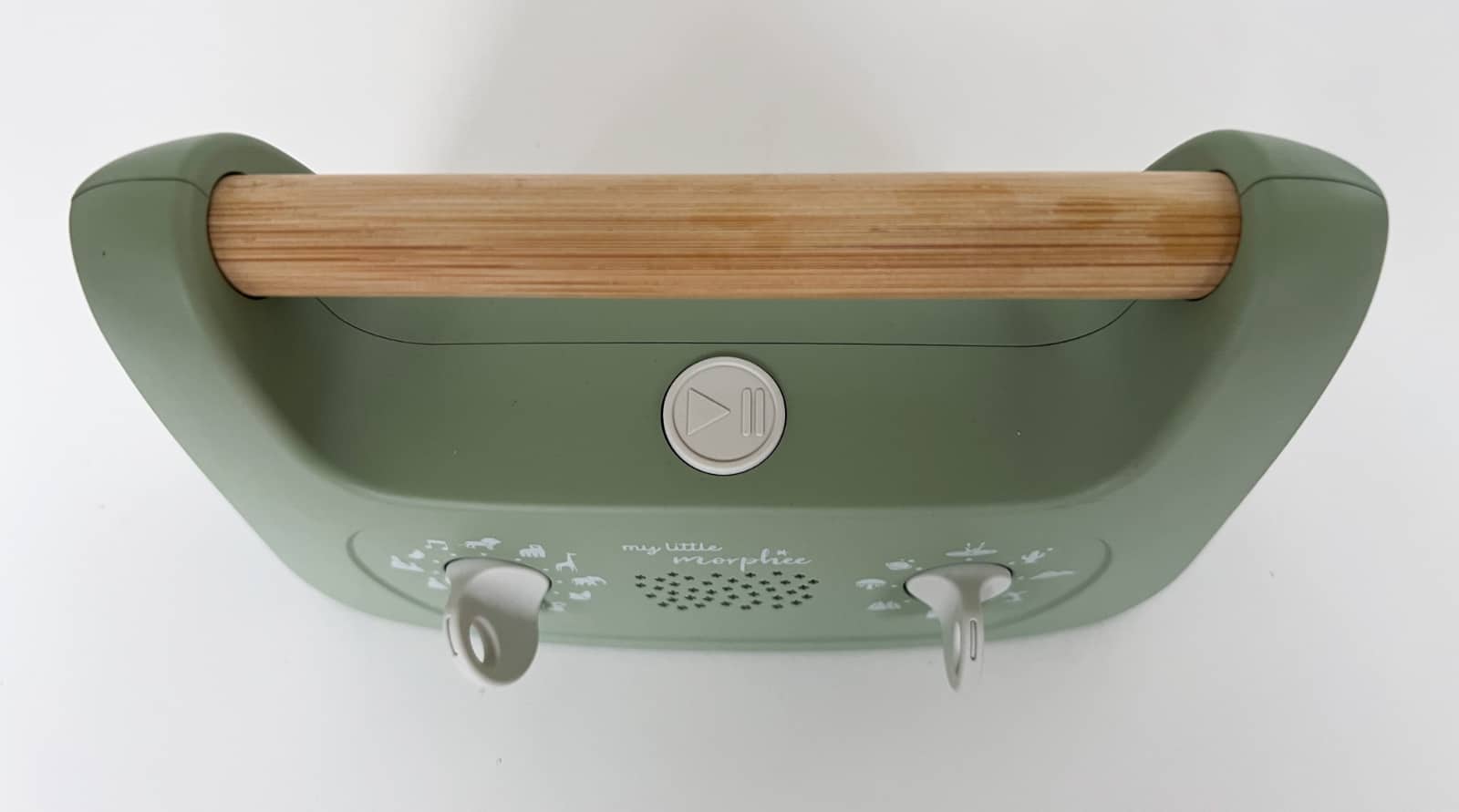 For the price, we actually don’t mind Morphee’s take on meditation for little people.

There are plenty of choices to make kids happy, and the simple controls mean you don’t even need to read the manual to use it. Simply plug it in, turn up the sound a bit, and press play. It’s that easy.

We do wish Morphee had considered a longer mode for parents who need the sounds to run for a whole lot longer, because frankly, this gadget could have killed two birds with the one calming stone.

But even in version one, it’s a neat idea sure to grab some parents, and maybe even get their kids to bed calmly. 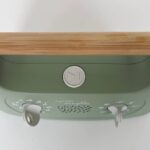 My Little Morphee
The good
Cute design
Feels well built
Lightweight
Easy for kids and adults to use
Lots of choices and combinations for what you can listen to
The not-so-good
Sound quality isn't stellar
3 hour battery
Can't be used for an extended amount of time, and isn't a white noise or lullaby generator
4