It’s been two years since the reinvented iPad Air rocked up, but now we’re ready with the new model. Already looking like an iPad Pro, is the 2022 iPad Air as close as siblings get?

If it seems like a totally normal situation for iPads to get updated yearly, it’s because it typically is, and something Apple often does. Much like how computers change regularly, so too can the small tablets that many of us use as those computers, which we suspect is why Apple updates them often, adding new performance enhancing features and giving you yet one more reason to upgrade.

Last year, almost every iPad received an upgrade, and some with a camera technology that supported the ability to automatically keep your head focused on screen. It was so successful that even the entry-level iPad got the tech, but not one.

Adopting a design that is practically identical to the previous iPad Air, the 2022 iPad Air is the spitting image, save for maybe a little more colour.

In 2020, we reviewed the blue iPad Air and this year, we’re reviewing the same model, which manages to be more blue, but otherwise identical. It’s a little like Incubus’ song name “A Certain Shade of Green”, except the model is clearly blue, and very blue at that, though there are four other colours, none of which are green.

However they all look the spitting image of the last model of iPad Air, and even the current iPad Pro, thanks to that flat-edged design we see on the iPhone 12 range, iPhone 13 range, iPad Pro, and iPad Mini. About the only device that doesn’t follow suit is the standard 9th-gen iPad, but that’s totally fine.

Inside, the same look as last generation also features some similar stuff to last gen, though there have been updates.

It’s a high-end chip straight out of a computer — clearly — offering just that little bit more grunt to work with, providing an 8-core CPU, 8-core GPU (making it a little better than what’s in the base model of the M1 MacBook Air), and a 16-core Neural Engine for machine learning instructions, too.

Apple has also updated the front-facing camera slightly, moving from a 7 megapixel FaceTime HD camera in the 4th-gen iPad Air to a 12 megapixel model, the latter of which now supports Apple’s “Centre Stage” portrait cropping technology to keep your head firmly focused on in video chats and such.

And the other main difference is if you buy the cellular model, which now comes with 5G working over sub-6 in Australia, though it also supports 4G, as well.

However, save for the new chip, new camera, and support for 5G, almost every other feature is identical the old model, making the 5th-generation iPad Air more about bringing the specs and features in line with the rest of the iPad range.

As such, there’s a choice between 64 and 256GB storage in this iPad Air, a single USB Type C port at the bottom, a single 12 megapixel camera at the back, support for WiFi 6 and Bluetooth 5, two speakers, a side-mounted magnet for holding onto the Apple Pencil, a back magnetic port for the Apple Smart Connector meant for Apple keyboard cases, and a Touch ID fingerprint sensor built into the power button. 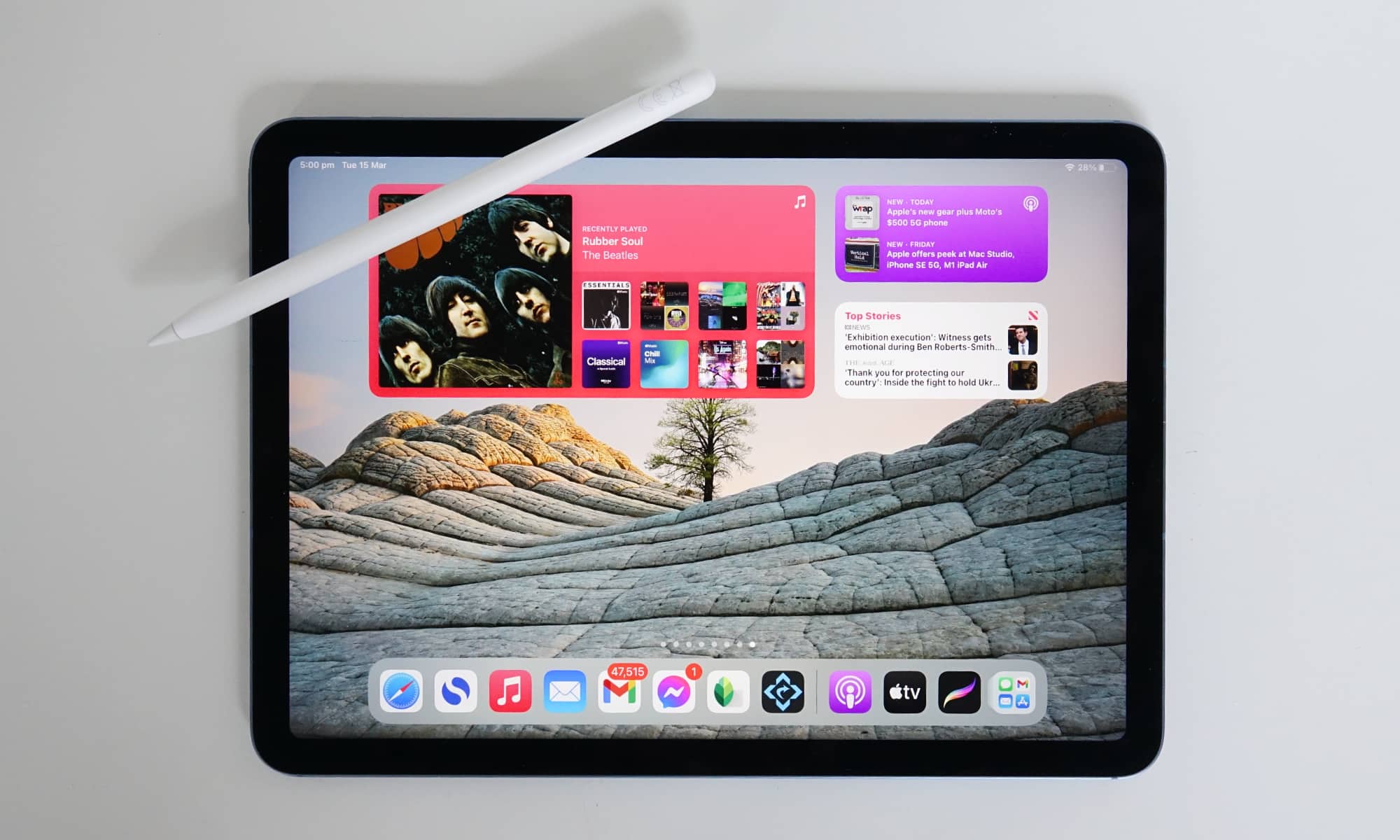 Like the previous generation, you’ll also be getting the same excellent screen, an In-Plane Switching (IPS) display measuring 10.9 inches and offering up a resolution of 2360×1640. The pixel clarity sits at the same as the 11 inch iPad Pro — 264 ppi — and it’s only a fraction smaller than that model, as well, differing by 0.1 inches and such a tiny amount of pixels, at that.

You’ll find support for the P3 colour space and Apple’s white-balancing True Tone display technology, and the look is just excellent, but the main point of difference between the iPad Pro and the iPad Air display technology isn’t even the screen size, but rather the speed of the screen.

If you don’t know what you’re looking for, the absence of ProMotion isn’t that big of a deal, but if you expect super slick scribbles and such, it’s just one of the reasons to consider the iPad Pro over the Air.

However without it, the Air is fine all the same, with a lovely nearly 11 inch display that’s easy on the eyes with plenty of colour and picture quality all the same. 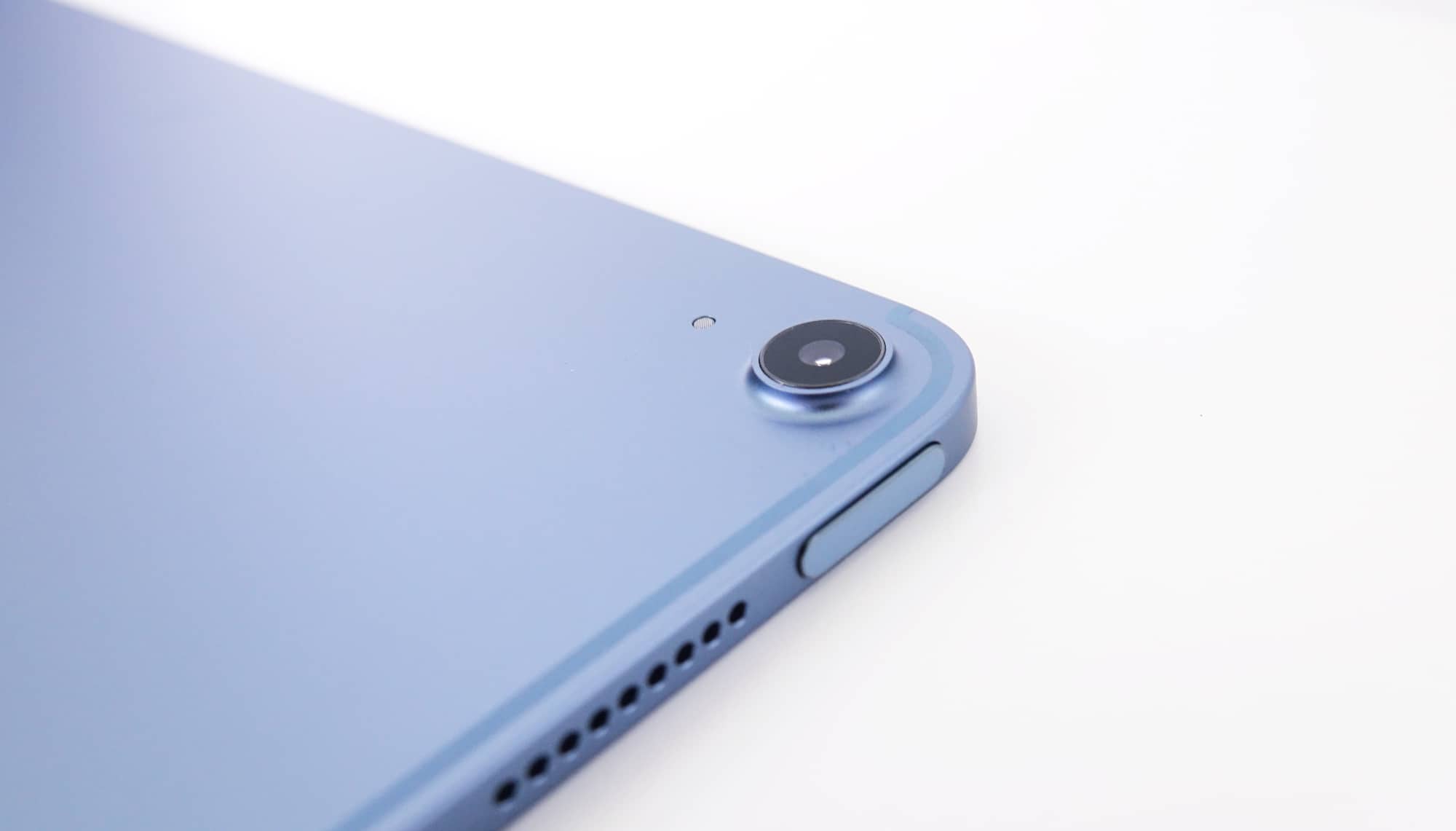 Using the 5th-gen iPad Air is much the same as using any iPad, though you may actually prefer one of the features in this model to what’s in the more expensive “pro” generation: the fingerprint sensor.

Much like how the iPhone SE sports a fingerprint sensor to let you jump in without needing to scan your face, so too does the iPad Air, giving you a reliable way to jump into your iPad, especially while wearing a mask in the pandemic.

To Apple’s credit, it does have a version of iOS rolling out that supports face masks — and it’s quite good in our tests — but the fingerprint sensor might be just that much more useful for some, so that’s here along for the ride.

To use it, simply hold your finger against the Touch ID power button, and it’ll kick in, working quickly to let you log in, or even do other things, such as see your passwords and pay for things.

Everything else about the iPad Air is more or less just simple iPad operation, from the big touchscreen, the interface elements of iPadOS, support for the optional Apple Pencil, or even using a keyboard, something that works just as well as it does on the iPad Pro thanks to Apple’s flat port on the back, supporting the Magic Keyboard or Smart Keyboard Folio. Alternatively, you could bring your own compatible Bluetooth keyboard case to the mix and use that. 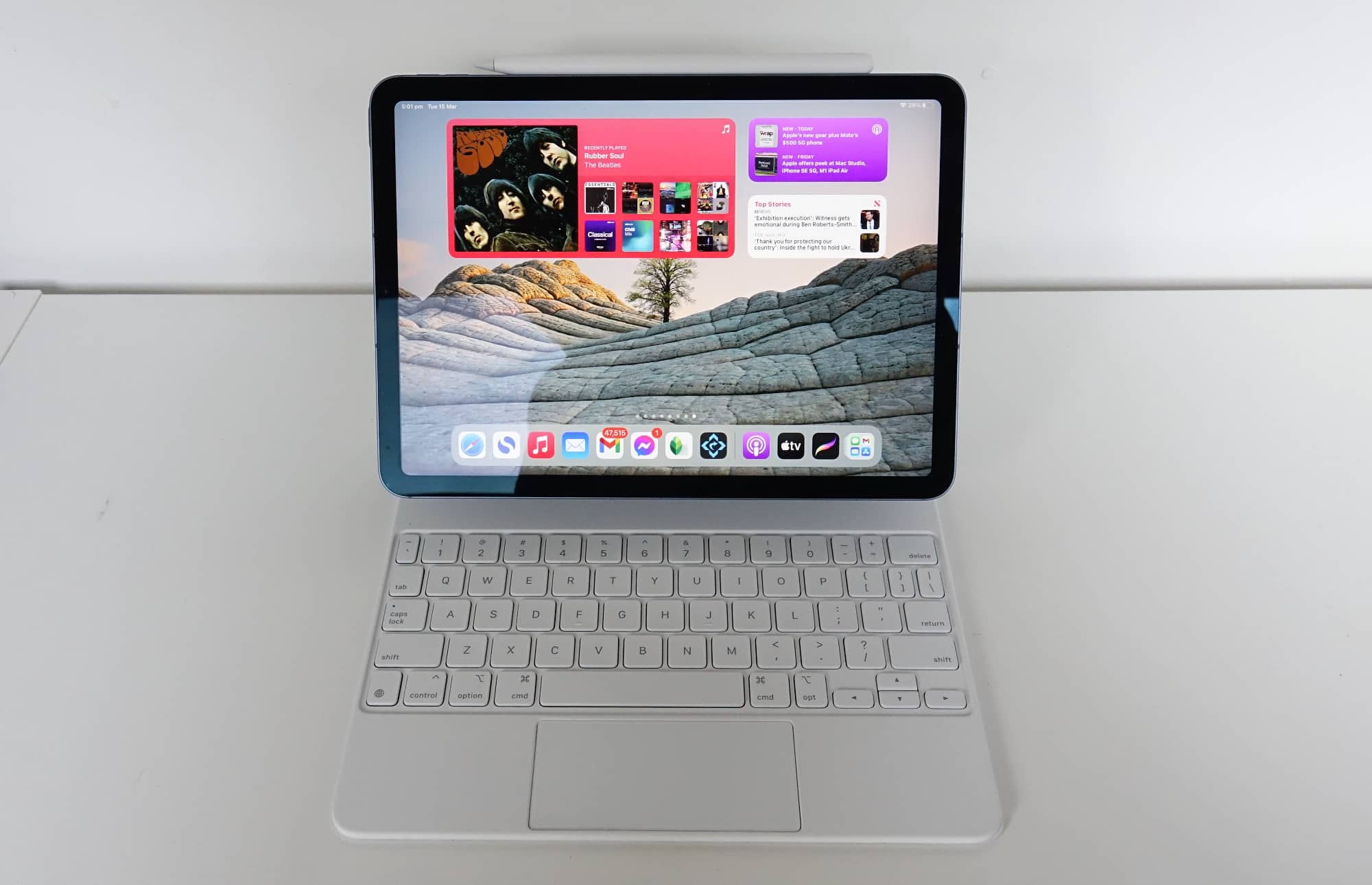 Armed with a different chip from the previous model, and what is basically Apple’s best tablet chip around, the upgrade of the iPad Air chip is a real stand out decision by Apple, boosting the tech considerably.

Apple could have adopted the chip in the iPad Mini, which is also the chip in the iPhone 13 Pro, the A15 Bionic, but that may not have been much of a bump. Instead, by choosing to use the M1, Apple is offering what is basically a less expensive alternative to the iPad Pro that also happens to come with the same system performance as the MacBook Air (at least until the machine is updated likely later in the year).

This change shows up in the benchmarks, synthetic as they are, which also shows us a memory difference from the 4th-gen iPad Air. While Apple didn’t publicly state 4GB RAM in the 2020 iPad Air, the latest model shows up with 8GB, doubling things and showing up in our benchmarks, as well.

And those benchmarks show why Apple moved to the M1 for the Air: a shift to an A15 mightn’t have delivered much of a speed improvement, as noted in the iPad Mini, but a change to the M1 boosts things considerably.

As it is, the new Air is so far, it even outperforms the base model MacBook Air. Yikes!

Of course, this isn’t a MacBook because it’s an iPad, and so features a slimmer battery set for a good 10 hours max.

That’s not a bad battery life, and is practically spot on with the previous model, though we found that you could get two days of intermittent use on the iPad Air with ease, handy if you don’t really plan to do 10 hours of web surfing, or even 10 hours of watching video.

Priced from $929 in Australia for the 64GB WiFi model, Apple has upped the prices a little since the 2020 edition arrived, possibly because of the times having changed, or even that supply chain issue you might have heard is affecting everything.

In either case, the 64GB iPad Air is a little more expensive, as are the rest of the models. Based on what we’re seeing, it’s a roughly $30 increase on the range from the previous generation of iPad Airs in Australia.

That’s an acceptable value given the 2022 iPad Air is basically the 2020 iPad Air with a better chip and front-facing camera, which that $30 more than covers. 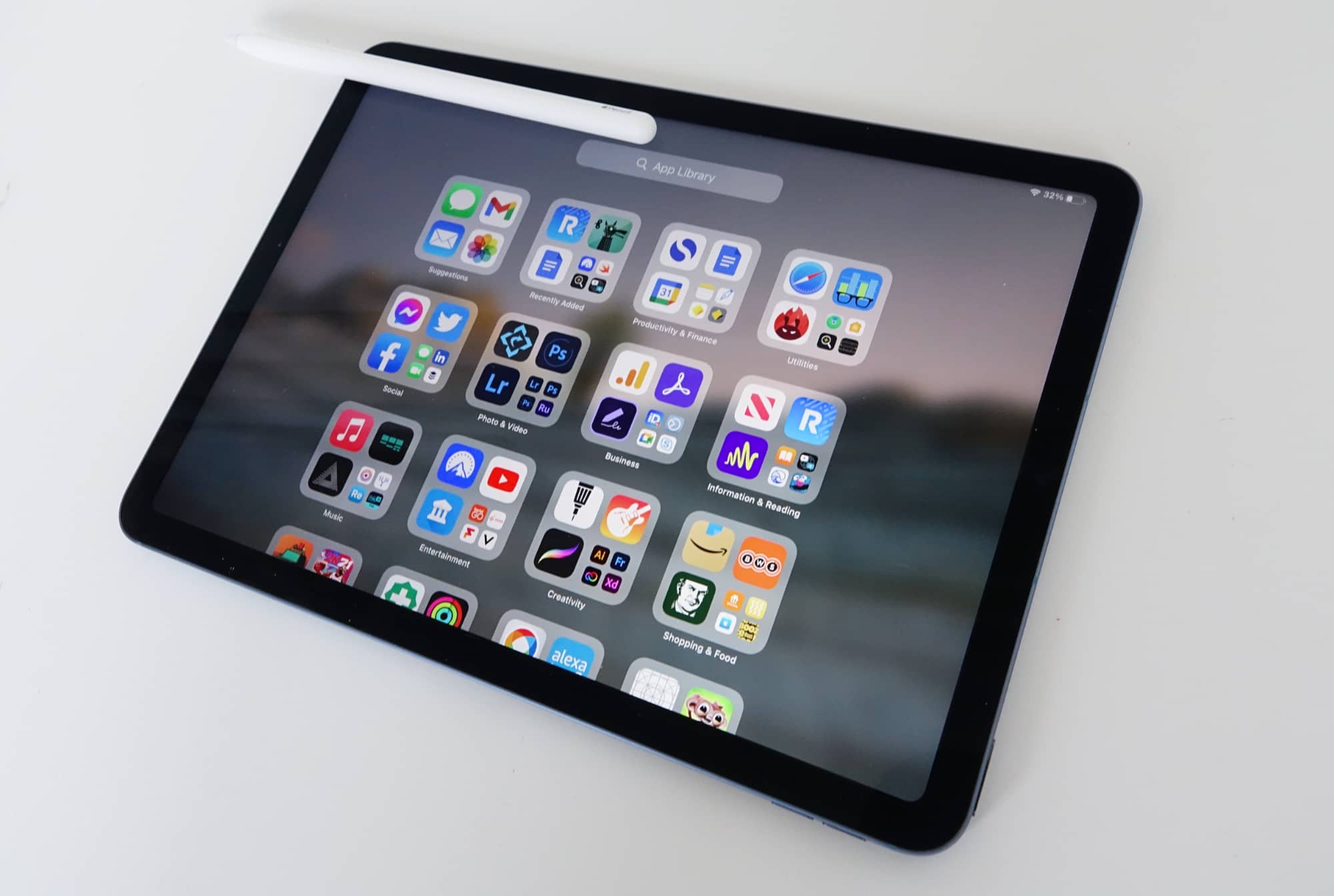 You get it on the iPhone, but not a single iPad, and it’s the one feature we long for.

Well, that and ProMotion. We get why Apple’s speedy screen animation technology isn’t in the iPad Air, though: you need to leave something for the high-end model, and convince people for the up-sell. That’s definitely one way to do it.

We’d also love to have seen its minimum storage double, like the 9th-gen iPad did. That 64GB starting amount is not a fantastic amount for the almost-pro iPad, and if it had started at 128GB, well, let’s just say we’d feel it’s a better deal overall.

Even without ProMotion, though, the iPad Air stands out because of what it delivers: the closest experience to the most premium iPad you can find, but for less.

Save for a few things, the 2022 iPad Air is like an iPad Pro at a better price, delivering value for those who need it. The feature list isn’t far from the high-end model, and unless you need the extra camera, the Face ID, or the faster on-screen animation speed, the iPad Air may well be the better value proposition compared to the 11 inch iPad Pro, especially given only the 12.9 inch model features the Mini-LED screen, a feature the 11 inch misses out on, as well.

If anything, the latest generation of the iPad Air might making picking an iPad a little easier: if you need all the bells and whistles, go for the 12.9 inch iPad Pro, otherwise opt for the new iPad Air, because it’s so close, you may not spot the difference yourself. Recommended. 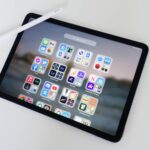 Apple iPad Air (M1, 2022)
Features
Design
Performance
Ease of use
Battery
Value
The good
Lovely design that looks like the iPad Pro...
...and even comes with the same Apple M1 chip as the iPad Pro...
...but doesn't come with the iPad Pro price
Solid build
Fingerprint sensor works really well
A slightly less expensive version of what is ostensibly the M1 iPad Pro
Supports the Apple Pencil
Supports iPad Pro accessories and Type C connections
The not-so-good
Lacks ProMotion
Still starts at 64GB, which isn't a great amount for an almost pro tablet
No water resistance
4.7