You can already find 5G under $500, but what do you get for a little more? The Oppo A94 5G offers a marginally more premium take on the range.

5G shouldn’t cost an arm and a leg, and last year we saw proof of that finally happening, as the technology made its way under the $1000 mark. This year, it’s even more affordable, as 5G smartphones approach the $500 mark and even under that.

However as nice as it is to find 5G for under $500, the results aren’t always super amazing. Slightly slower processors are one of the features you might find, and while there are some good ones, it’s not always a fair fight.

Oppo has been dabbling in this category longer than most, however. Earlier in the year, it had one of the first affordable 5G phones in the Reno 4, and more recently, there was the even less expensive A54 5G. A few months later, Oppo is giving the category another thwack, launching a marginally more premium AMOLED-equipped A94 5G. For $599, is this a better take on mid-range 5G? 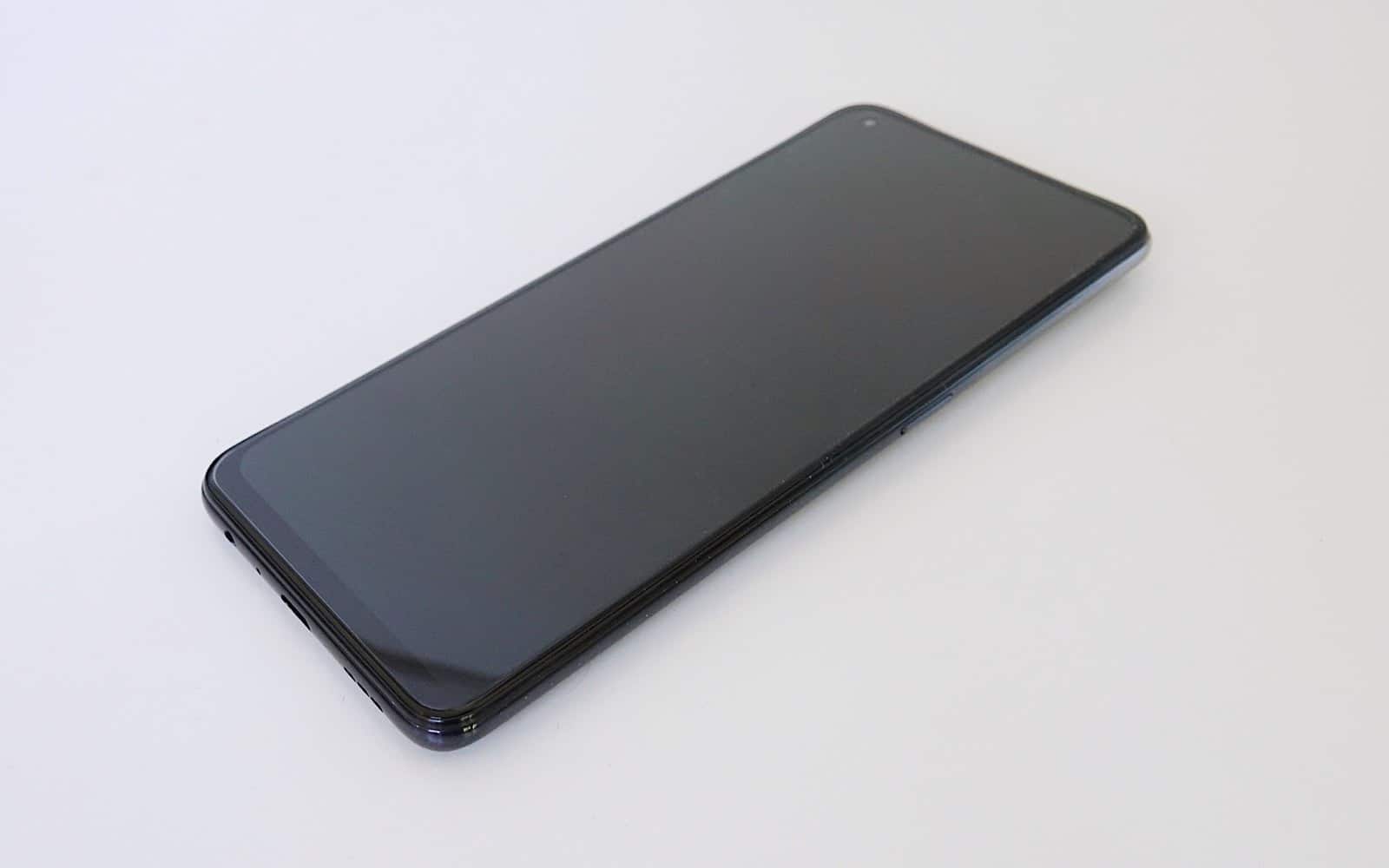 With a design similar to what Oppo revealed in the A54 earlier in the year, Oppo’s aptly named A94 is a slight improvement to the package.

There’s a similar back with a glossy gradient grey finish, an extruded rectangular camera block, and a shiny plastic frame, though Oppo has fine tuned some elements, making it a little easier on the thickness. As such, it measures around 7.8mm thick compared to 8.4mm on the A54, letting you know someone has changed.

And the change isn’t just on the design. Rather than need a power button with a fingerprint sensor underneath, Oppo has thrown that into the screen, giving the Oppo A94 5G one of those in-screen sensors, so as not to need a wider fingerprint sensor button. It means the edges have been squeezed a little tighter, and the look is marginally slimmer and slicker than Oppo’s other mid-range 5G phones.

Inside, there’s more than just a departure from the A54 on design, with a shift from a Qualcomm Snapdragon to a MediaTek Dimensity 800U, a change not likely to make a tremendous difference to most, even if the upgrade to 8GB RAM probably will. You’ll find 128GB of storage with room to move over a microSD slot here, plus Android 11 with Oppo’s skinned version, ColorOS 11.

As far as connections go, Oppo has gone with a theme of things relating to the number “five” offering 5G, WiFi 5 (802.11a/b/g/n/ac WiFi), Bluetooth 5, and even a 3.5mm headset jack. You’ll also find Type C USB for charging and data, plus Near-Field Communication (NFC) for Google Pay. 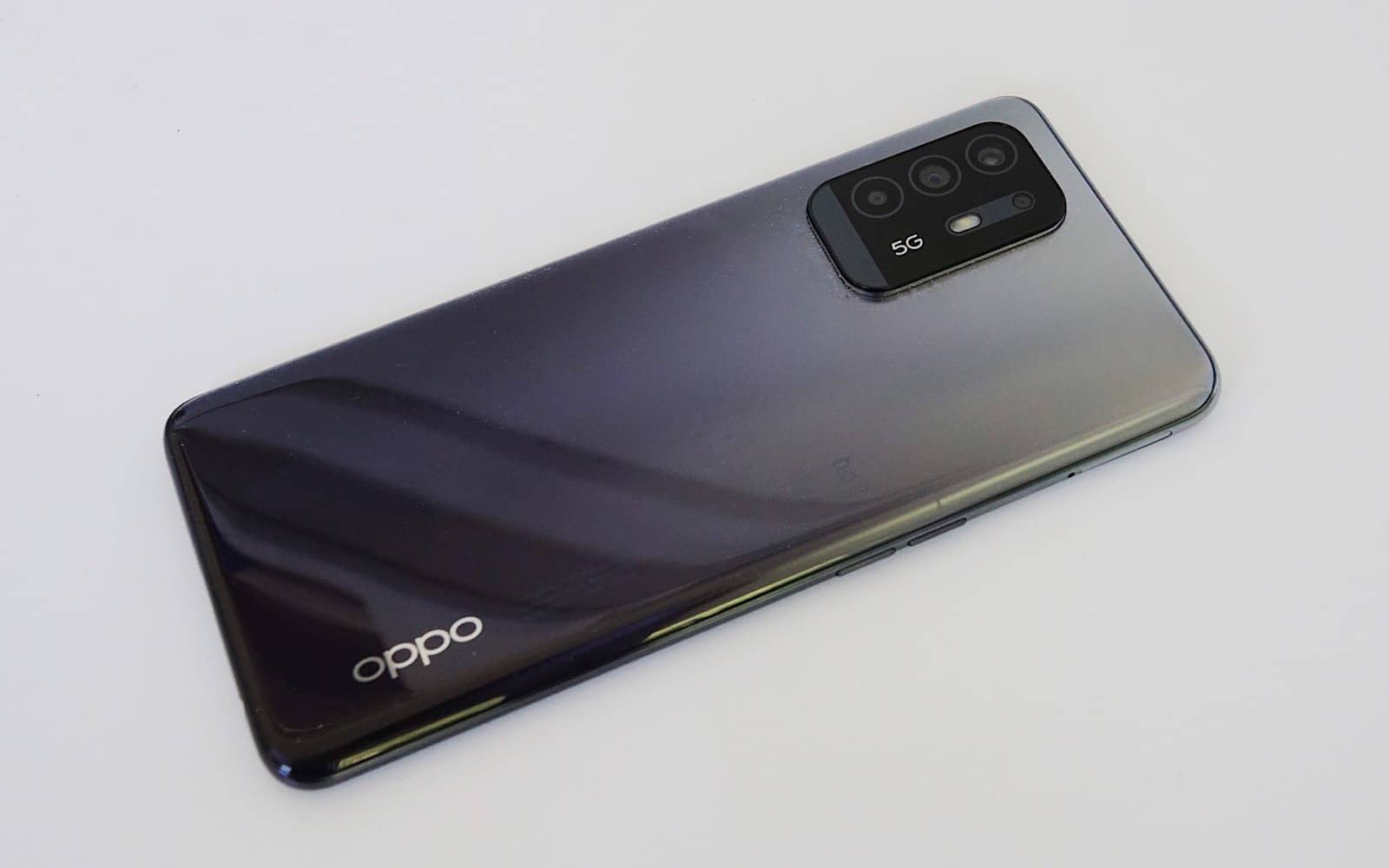 And you’ll find five cameras, with four on the back and one on the front. At the back, it’s much the same as it was on the A54 and A74 before it, offering a 48 megapixel F1.7 standard wide, 8 megapixel F2.2 ultra-wide, and two 2 megapixel F2.4 cameras for macro and monochromatic imagery likely helping out the portrait mode, while the front is a 16 megapixel camera.

A fingerprint sensor can be found to unlock the phone, but found in the screen as we mentioned previously, and that screen is a 6.43 inch AMOLED display sporting a resolution of 2400×1080 Full HD+, with as many as 409 pixels per inch of clarity.

The Oppo A94 5G relies on a 4310mAh battery supporting fast charge, but no wireless charging can be found here. 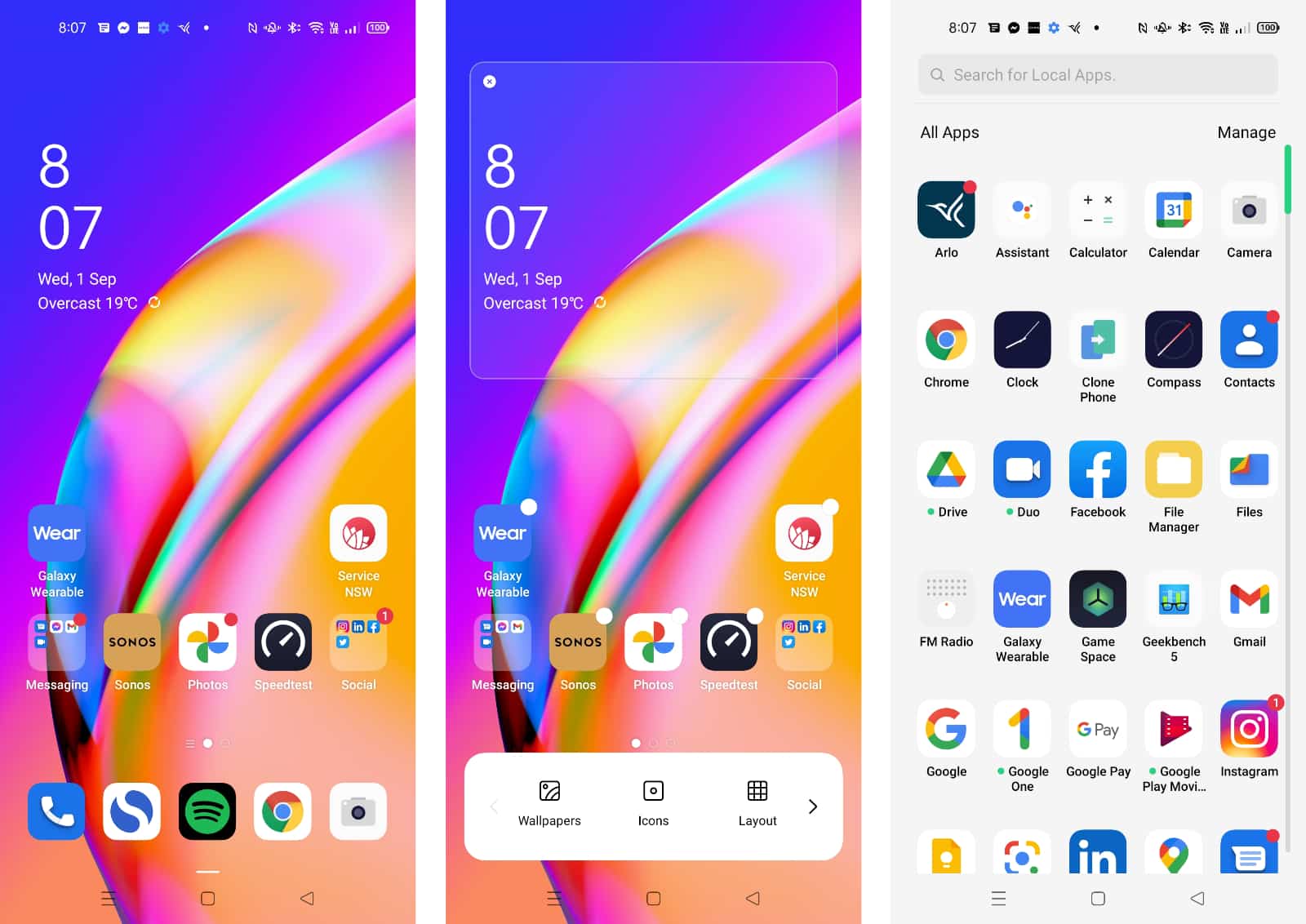 Another day, another Android phone, because if you’ve seen one of these recently, you probably know how to use it.

There’s a widgetised home screen, app drawer, and a nice drop down menu to play with, plus support for Oppo’s “O Relax” app that we’ve played with before, and while that focuses the style of Android more like what Android users expect, there’s also an interface like what Apple users get where everything is on the one screen.

It’s simple and easy and more or less what we expect from Oppo, with ColorOS 11 slick and friendly, and nice enough for anyone to adjust.

You’ll find three ways of waking up the A94 5G, using either a PIN, facial unlock, or a fingerprint, with the latter in the screen. Like other phones with both facial and fingerprint, we found the facial unlock to be more reliable, while the fingerprint worked, but might take an extra half second to whir into action. 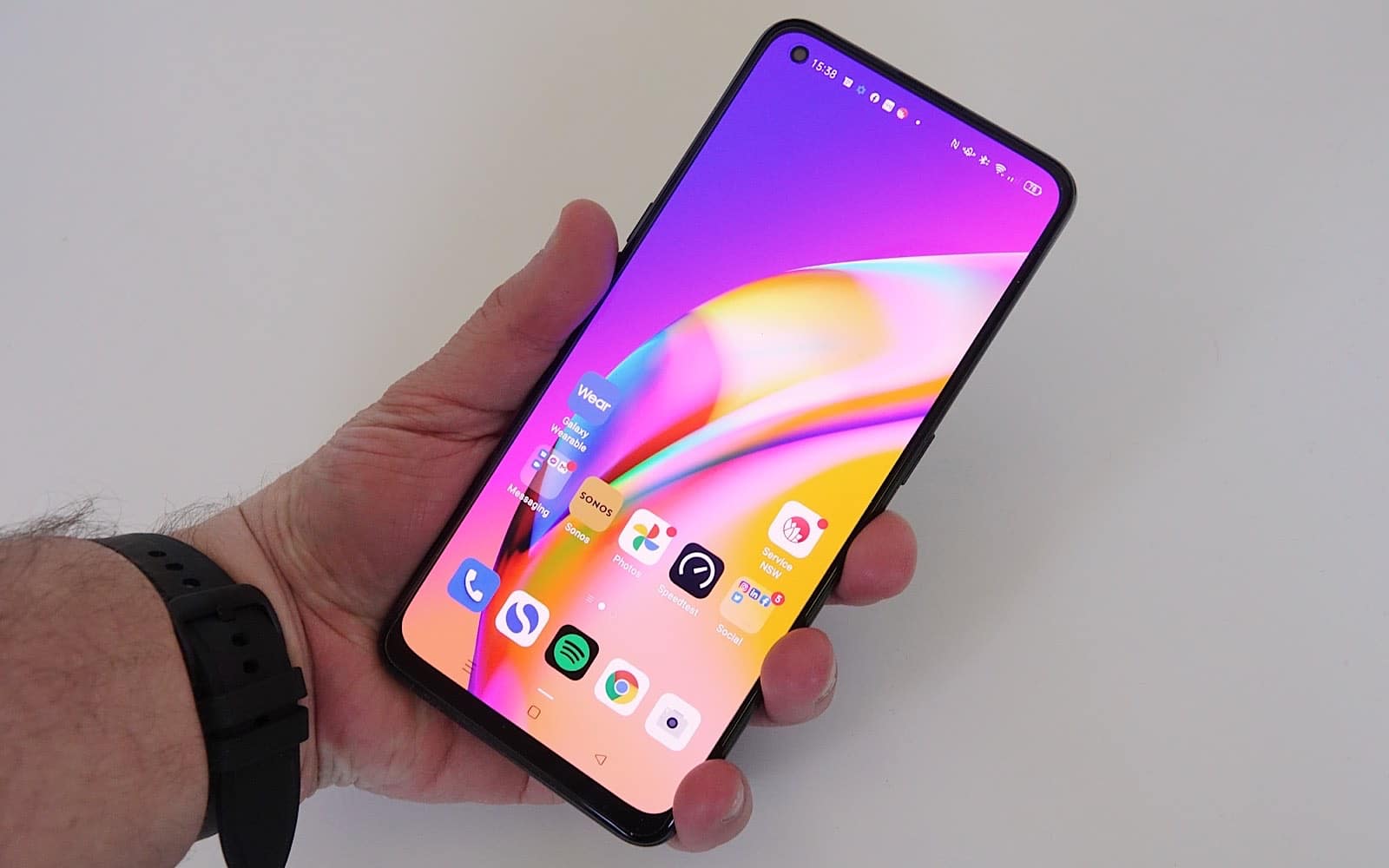 One of the main features points of difference for the A94, Oppo has chosen an AMOLED screen for the A94, meaning you get a bright and sharp display with a lot of colours and solid blacks.

It’s distinct to the experience on the A54, which was nice enough and easy on the eyes, but the A94’s AMOLED is much better, and makes the phone so much nicer to look at, for sure.

Also solid is the performance, which you can thank the combination of specs.

Armed with a MediaTek Dimensity 800U chip, the Oppo A94 5G isn’t exactly slow, but doesn’t feel as fast as phones with 7xx or 8xx Snapdragon chips. That said, the combination of 8GB RAM and the chip makes it very much a Goldilocks phone, because it feels just right.

It means that regardless of what you’re doing, you should find the A94 runs along smoothly, without so much as a hint of lag or slowdowns. They do pop up from time to time, but they’re rare and fewer in number than what we experienced with the similar A54, which sported only 4GB RAM, and felt severely underpowered.

In comparison, the A94 actually performs the way you’d expect a phone to do so these days, making it easily usable. 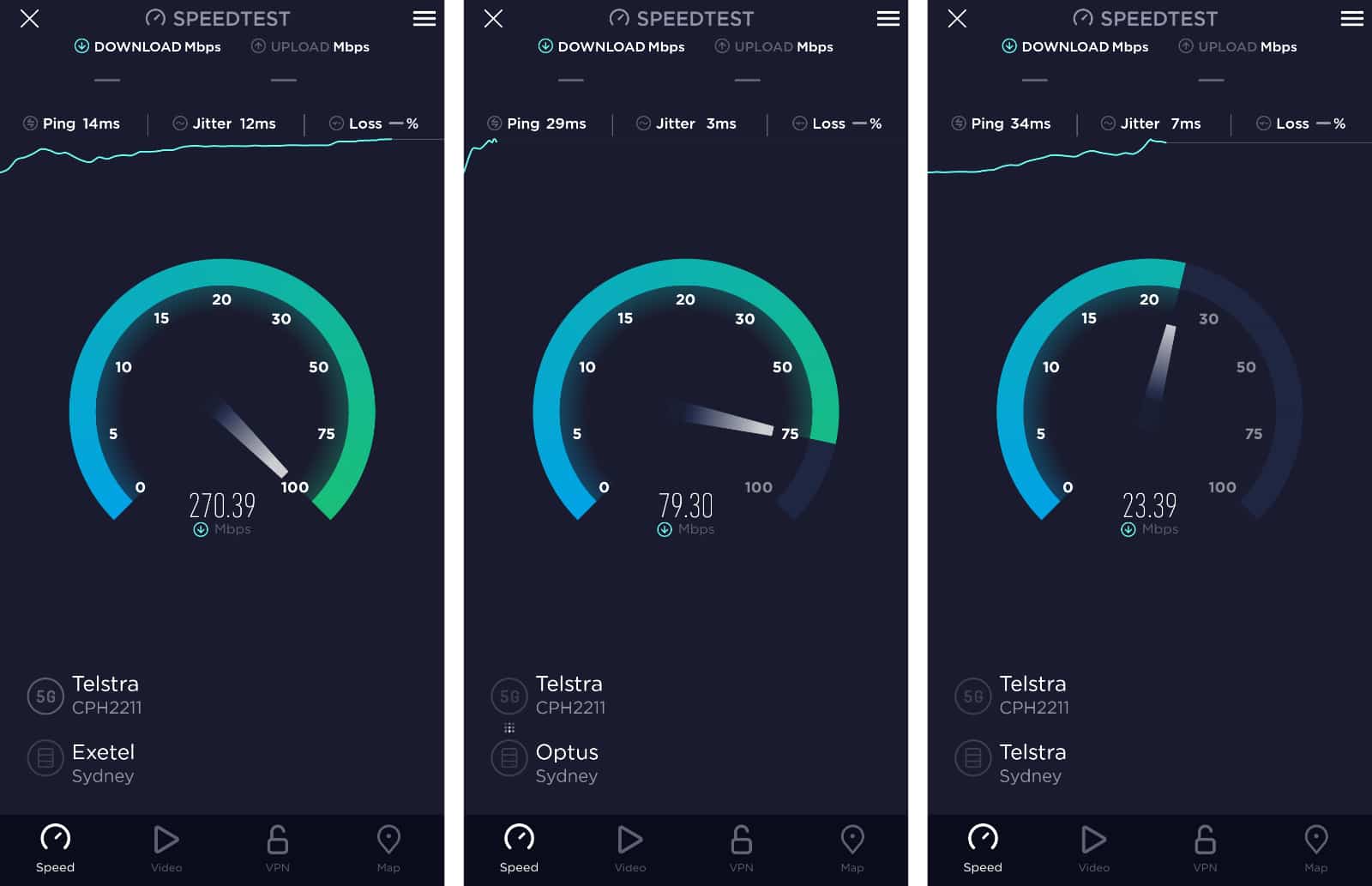 There’s also that 5G capability here, which handles mobile performance well, achieving speeds as high as 278Mbps in our tests, which thank to NSW lockdown wasn’t able to be tested across much of Sydney, but was tested all the same. The 5G service is still rolling out, so your speeds may vary, though this phone definitely has no problems latching on where it needs to.

The performed is markedly improved on where it was in the A54, but the camera is very much the same, and that’s not entirely a bad thing.

Overall, the images are relatively solid in daylight, while lower light means you’ll want to fire the flash, with darkness not exactly playing nicely regardless of whether on night mode or without.

You’re not getting an amazing night-time camera with the A94, but for daylight and the occasional macro, the camera system will work fairly well, offering acceptable photos for the price, but not amazing ones.

Daytime photos are nice, low-light needs work, and the macro mode while neat is locked at a measly two megapixels and hardly enough to impress anyone.

The 16 megapixel selfie camera up front is handy, but little here in the camera departments manages to really wow, and seems very much in line with what we’ve seen on Oppo’s less expensive model, partly due to the fact that it is the same system altogether.

However the battery life is much the same, and that’s a good thing.

Offering almost two days of performance, you’ll find the Oppo A94 5G hit 1.5 days comfortably before needing to reach for a charger. Sufficed to say, you’ll probably charge it nightly, but if you don’t, you should be able to find quite a few hours left in the kitty.

That’s not a bad result for a 5G phone, particularly one with a low price tag, and means it should survive the workday and then some when we’re all back to departing home daily. 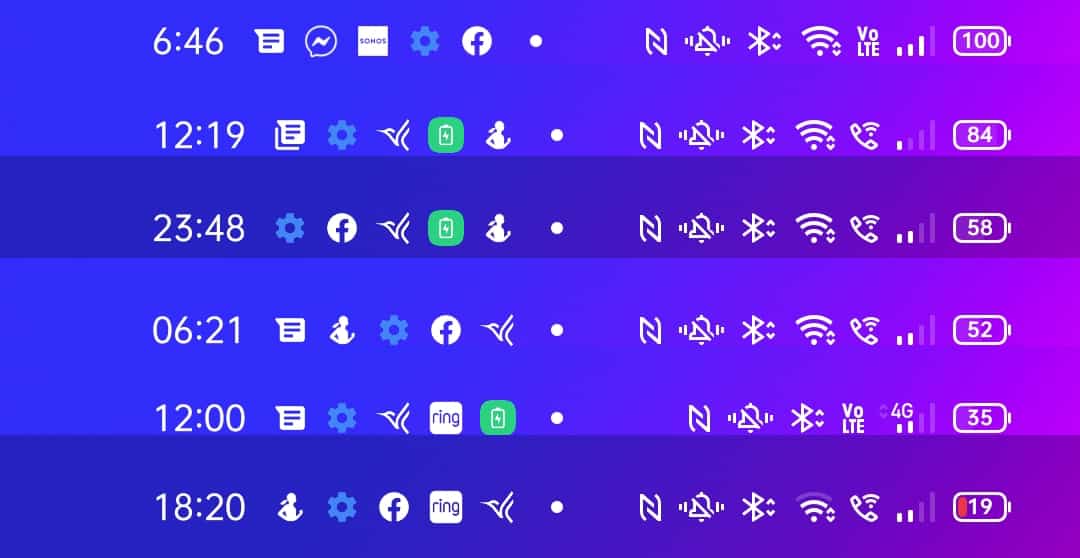 And it’s a phone that delivers a decent value, too, providing 5G, an AMOLED screen, 128GB storage, 8GB RAM, and a relatively sleek and comfortable design for $599. Granted, that’s a little more than the sub-$500 price point we’re seeing so many smartphone makers target, but at $99, it feels like you’re getting that little bit more.

While phones like the TCL 20 5G and Motorola G 5G Plus get in a lot of value for the $499 price point, Oppo’s A94 feels like it achieves the value proposition a little more, giving it a semi-premium aesthetic and feature set for $99 more. Not too shabby, at all.

For the price, the A94 5G feels like a win, but there are things we wish Oppo had considered upgrading, especially given how close the phone range is to the other low-end models, the A54 and A74.

The design is similar, but manages to get a little slimmer, while the chip has been changed, and you get more memory and storage. That’s nice, too. You also get an AMOLED screen, which means blacker blacks and more vivid colours. Handy.

But the camera has stayed the same, so the 48 megapixel main camera is the only winning feature, while the 8 megapixel ultra-wide is a little sub-par, as are the extra 2 megapixel cameras for monochromatic portraiture and macro shots. It’s a feature that could have been improved upon, and we wish it had.

The improvements to the screen and design are nice, but we’d have appreciated a little more oomph to make the phone shine well and truly over its less expensive siblings, for sure. 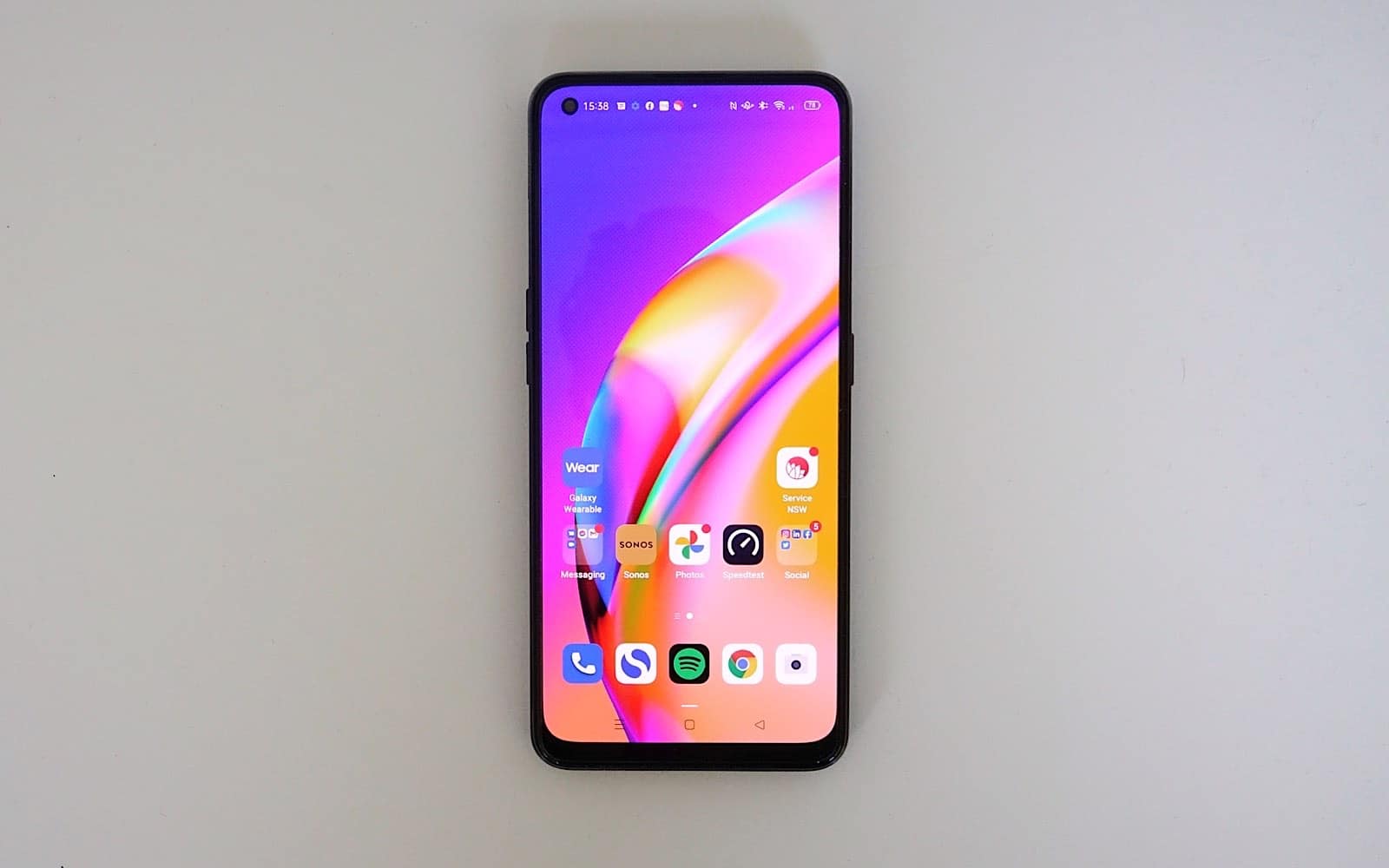 Between the cut-cost A54 and the marginally more expensive A94, Oppo has made a more premium budget 5G phone worth checking out.

If you’re after something with a slick look, nice screen, and some of that future-friendly 5G capability, the A94 has it, even if it needs a little bit more. While the camera doesn’t have anything on the equally priced 4G Pixel 4a or its 5G sibling, now that Google has removed both the 4a and the $799 Pixel 4a with 5G from stock in Australia (and most of the world), this gives the Oppo A94 a perch to sit on.

It means the Oppo A94 5G may make sense for folks keen for a marginally more premium take on mid-range 5G than what you can find for just below it. If you’re considering a 5G phone and want that little bit extra, this one might be worth a look. 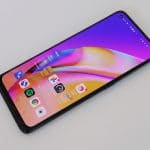