How much does $329 buy you in a phone? With Google Pay, a fingerprint scanner, and a big screen, the Nokia 5.4 makes the case for less is more.

Phone prices are coming down, and you can now get a whole lot for a whole lot less than you might have a few years ago. You probably don’t need us to tell you that, because you only need look around.

While smartphone can cost over two thousand dollars and pack in some very cool features, if you don’t need metal and glass bodies, cameras that can zoom in big time, or something that folds, well, you can find a phone built for a price.

And that’s an area Nokia is seriously targeting. The brand that used to be synonymous with the game “Snake” is a different company under HMD Global, but it’s still producing phones, and giving plenty of people an option for a mobile that fits a price point.

The 2021 Nokia 5.4 could just be one of those, because at a little over $300, it brings a lot of features to one phone. Is the Nokia 5.4 great value, or does it still leave room for improvement? 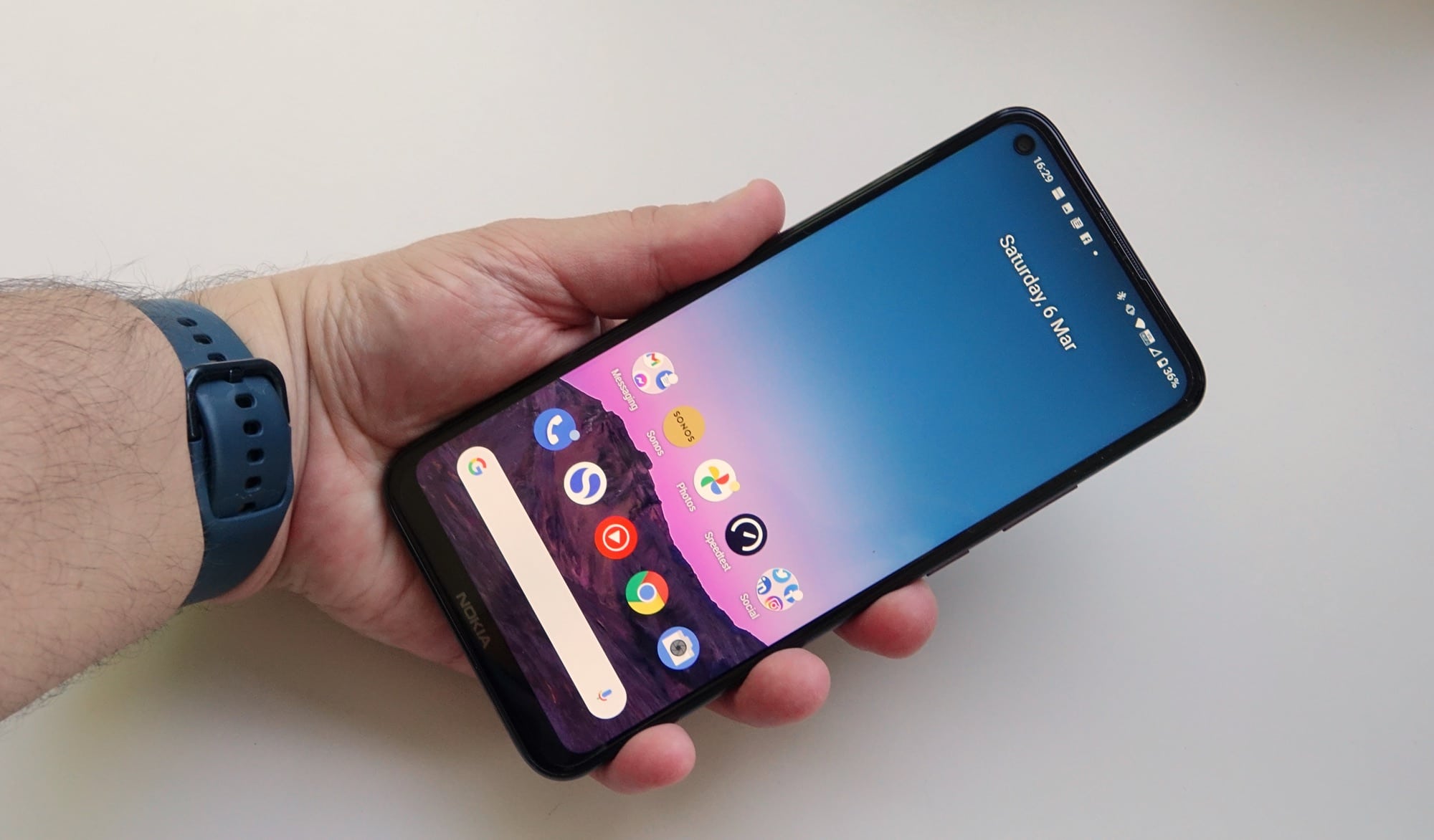 First let’s start with the design, because that’s as good a place as any in a phone.

And much like so many other phones, the Nokia 5.4 is basically just another touchscreen phone sporting mostly screen, a bit of a chin at the bottom, and a small camera in the top left with a punch hole design. That’s the “dotch” design some manufacturers refer to it as, and isn’t unlike the approach Google uses in the Pixel 4a.

This is a bigger phone than the Pixel 4a, though it has a fingerprint sensor on the back like that phone, plus a plastic body. It’s a plastic built to feel more like glass, though, so it can be a touch slippery, however we do like the plum colour it comes with. 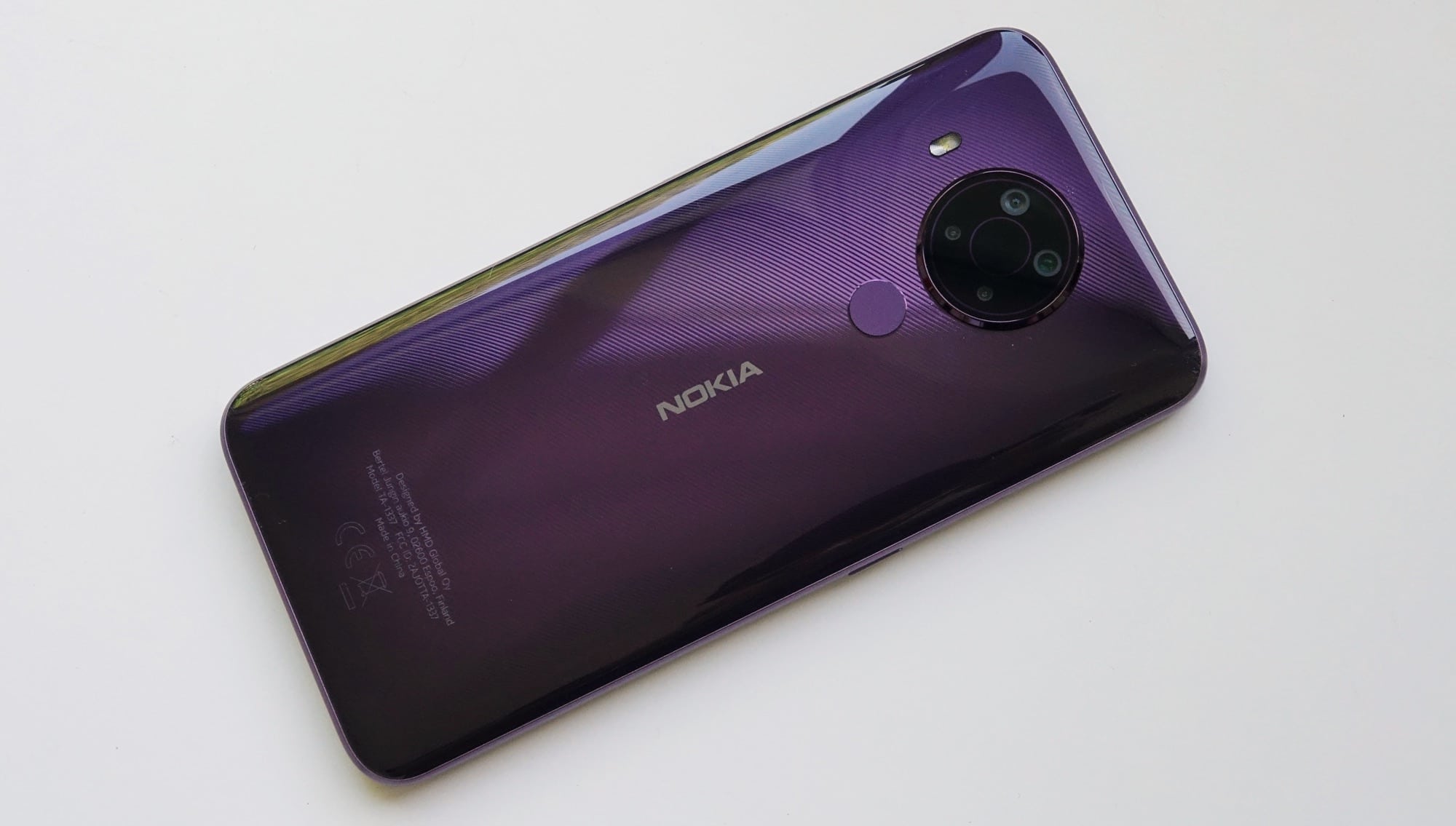 Inside, the hardware relies on a Qualcomm Snapdragon 662, making it a 4G phone, though one that comes with 4GB RAM and a surprisingly solid 128GB of storage, the latter of which can be upgraded using a microSD slot. The SIM tray also supports two nanoSIMs and a microSD, so you have some room to move.

Google’s Android One arrives on the Nokia 5.4 out of the box, which is about as stock as Google gets these days, and kind of makes this phone a little like a Pixel, only without all the extra Pixel-y goodness Google is known for.

It’s not a Pixel, though, and one of the dead giveaways is the camera setup, which looks past the one or two cameras Google uses, opting instead for four: a 48 megapixel main camera, a 5 megapixel ultra-wide, a 2 megapixel macro camera, and a 2 megapixel depth camera, all on the back. On the front, there’s a 16 megapixel selfie camera. 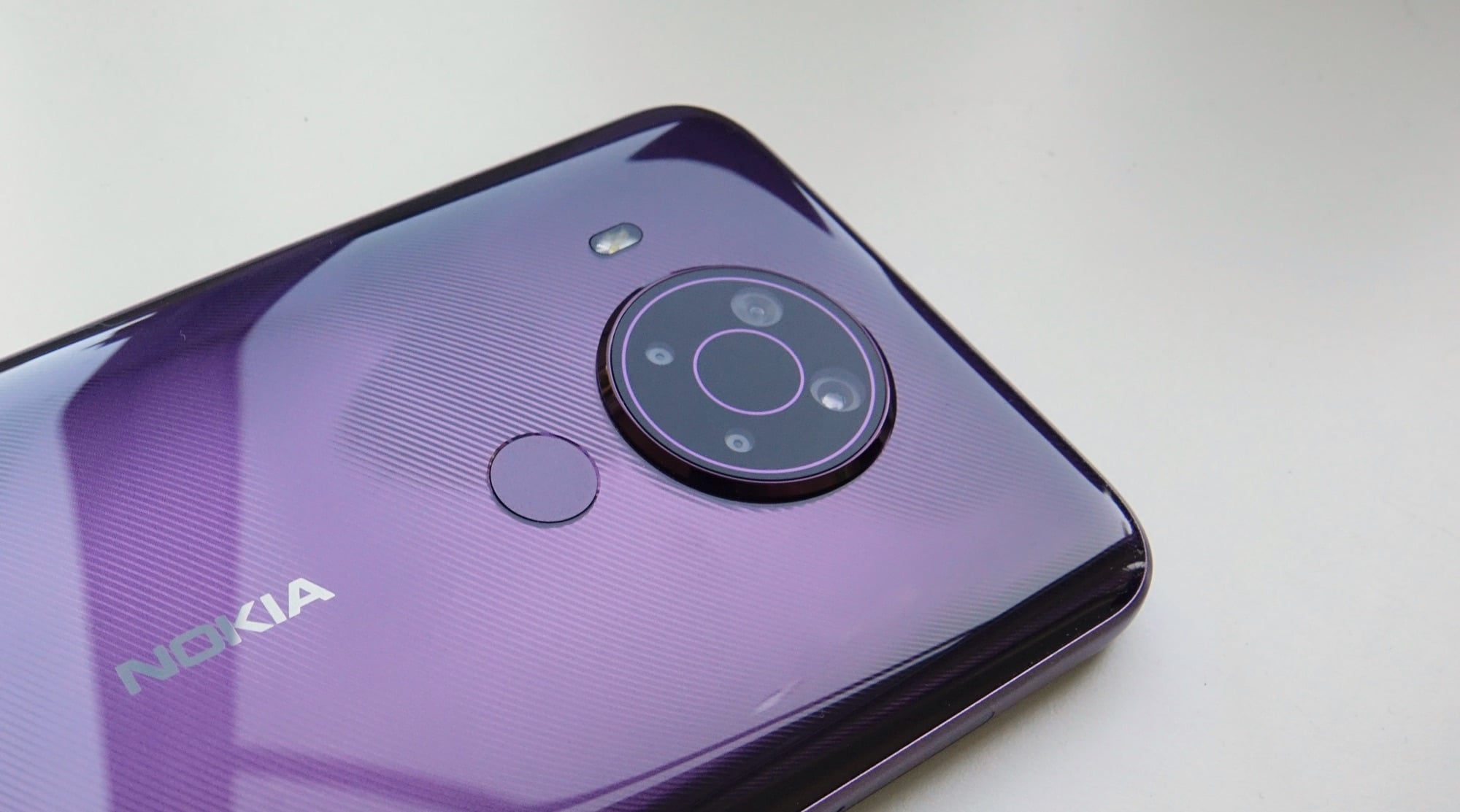 Yes, the Nokia 5.4 still has a 3.5mm jack, and even a pair of headphones in the box. That’s something you can’t say about every phone. 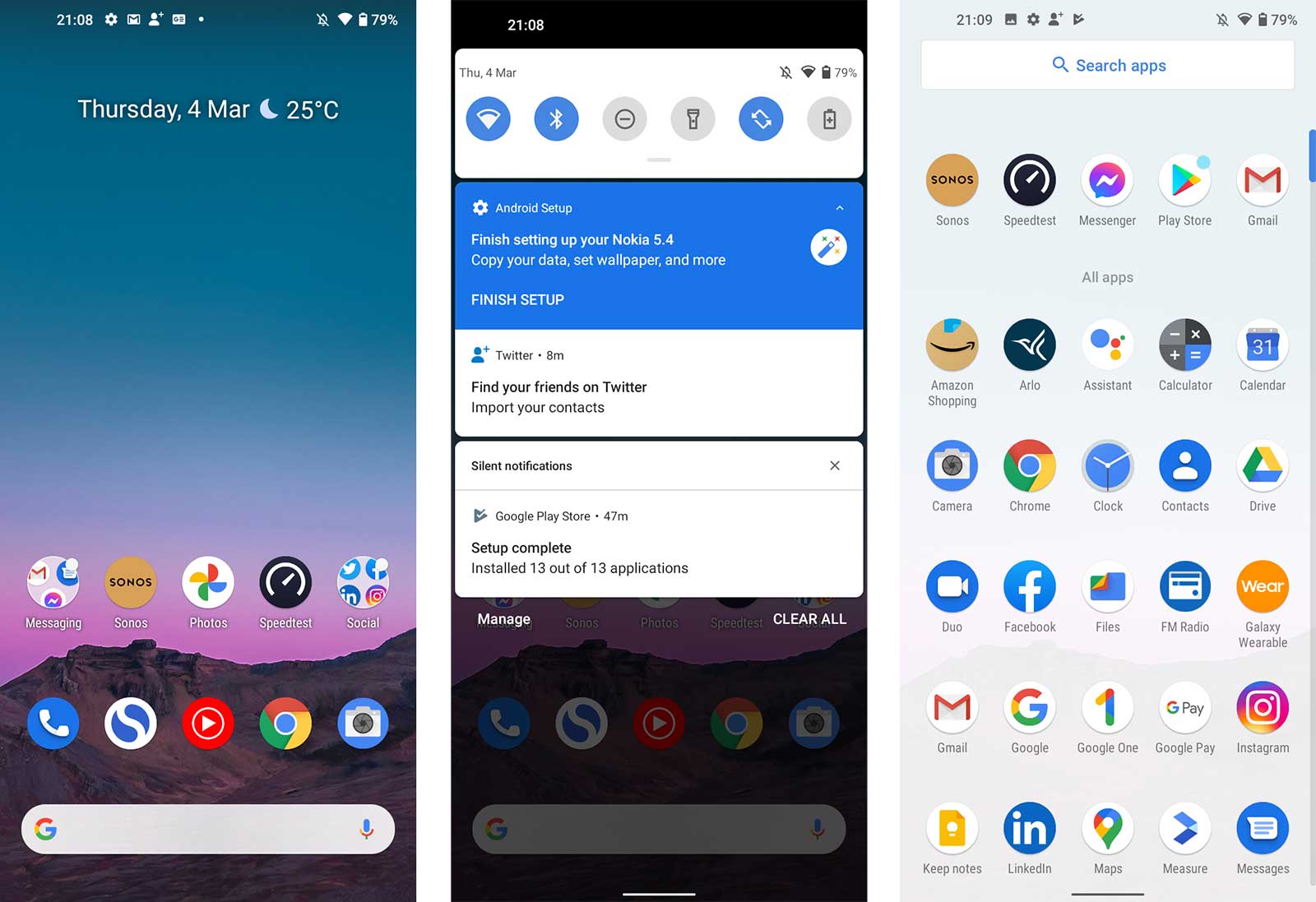 With a fairly stock version of Android along for the ride, Android One, you’ll find the Nokia 5.4 is kind of like a Pixel, but without the performance, and a much lower price tag.

That means you get widgetised homescreens, an app drawer you can swipe up to look at, and a left-most screen that is the Google Discovery screen. It’s most of the Google Pixel look without the extra stuff that makes a Pixel what it is, though there is a Google Assistant button on the left edge of the phone, something you can disable, though you don’t appear able to remap it.

Because this is Android One, you can also use the default gesture-specific controls, or you can even opt to bring back the soft button bar at the bottom. It’s your choice, and you’ll find it in the settings.

Unlocking the Nokia 5.4, there’s a fingerprint sensor on the back that can take a half second or a little longer to respond, so fortunately there’s also a facial login, too, using the front-facing camera to let you in. 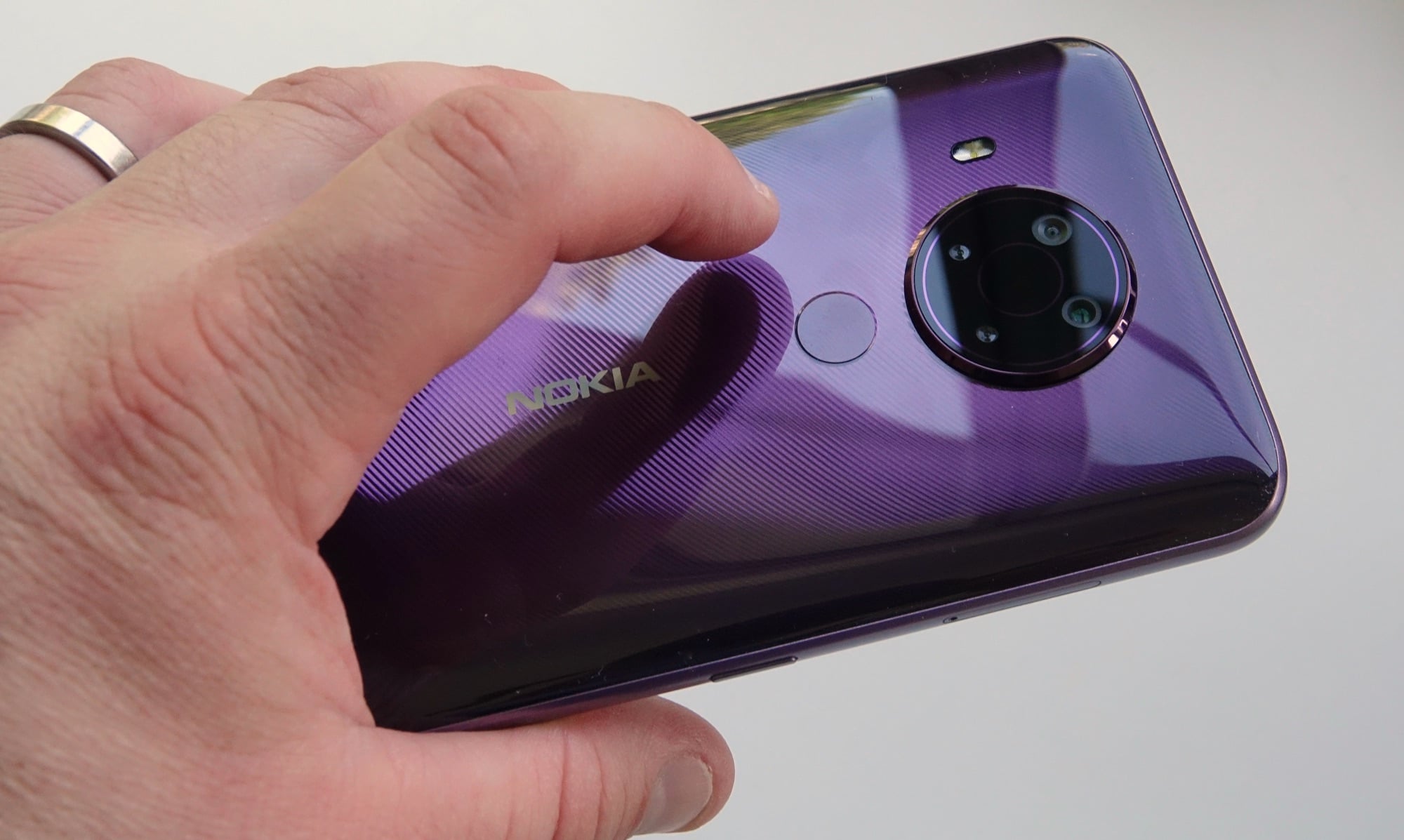 Armed with a Snapdragon 662 and 4GB RAM, the Nokia 5.4 isn’t exactly a powerhouse, but given the $329 price point, it’s hardly much of a surprise.

However between the chip and the memory, the hardware doesn’t always nail acceptable performance. It definitely works, but we found the Nokia 5.4 required patience at times, with a delay in using apps on the phone.

Wake it up and there’s a good half second for the phone to respond. Once in, and it’s fine, but typically there’s a half second upon wake up, or even to fire the shutter in the camera. Sometimes, the system spec would cause an app to struggle in general.

For instance, we found we couldn’t jump across the tabs of Facebook at points, at least until we forced the app to close. And the camera even crashed at times, as well.

Basically, the Nokia 5.4 isn’t a top-end device, so don’t expect it to perform well. Rather, it’s a phone that can be good, but can also require just a little bit of patience. 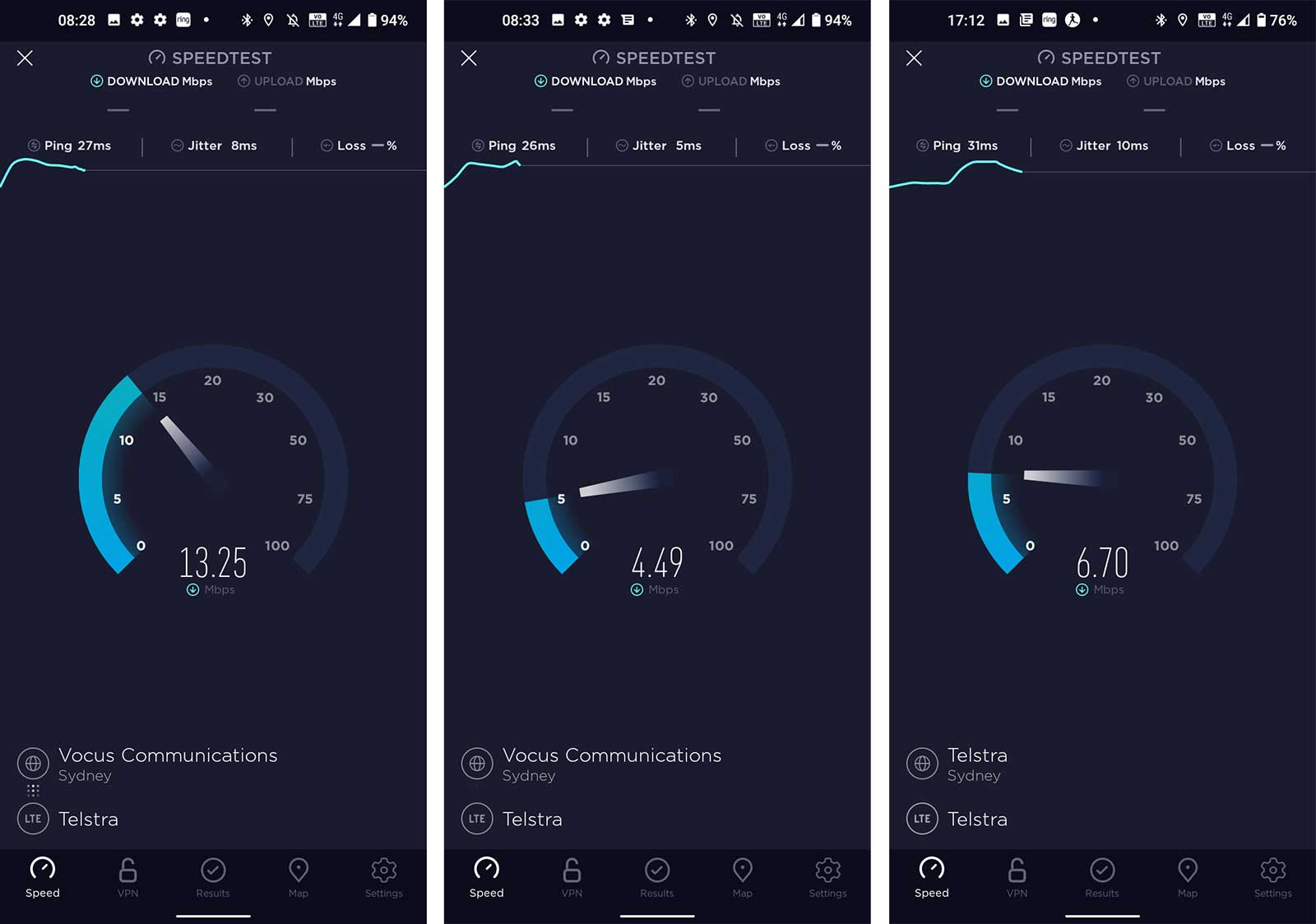 Even the mobile performance doesn’t feel top-end, with a Category 4 LTE modem here, which is basically the lowest 4G modem you can find in phones. While Cat 4’s 150Mbps download limitation is by no means slow, we never found the Nokia 5.4 hit anywhere near 150, maxing out at 20Mbps in our tests in Sydney.

That’ll be enough for many, but the Nokia 5.4 is by no means a fast 4G phone at all.

The aforementioned problem with the camera app was just one side of things we didn’t expect. It only kicks in during the macro mode, but given there’s a macro camera intentionally included, it’s a bit of a surprise that there’s a specific macro crash, to say the least.

We could recreate it, too: you just need to get close enough that the macro mode has a problem with the focus, and the camera app will say it can’t save your photo, and then subsequently crash. 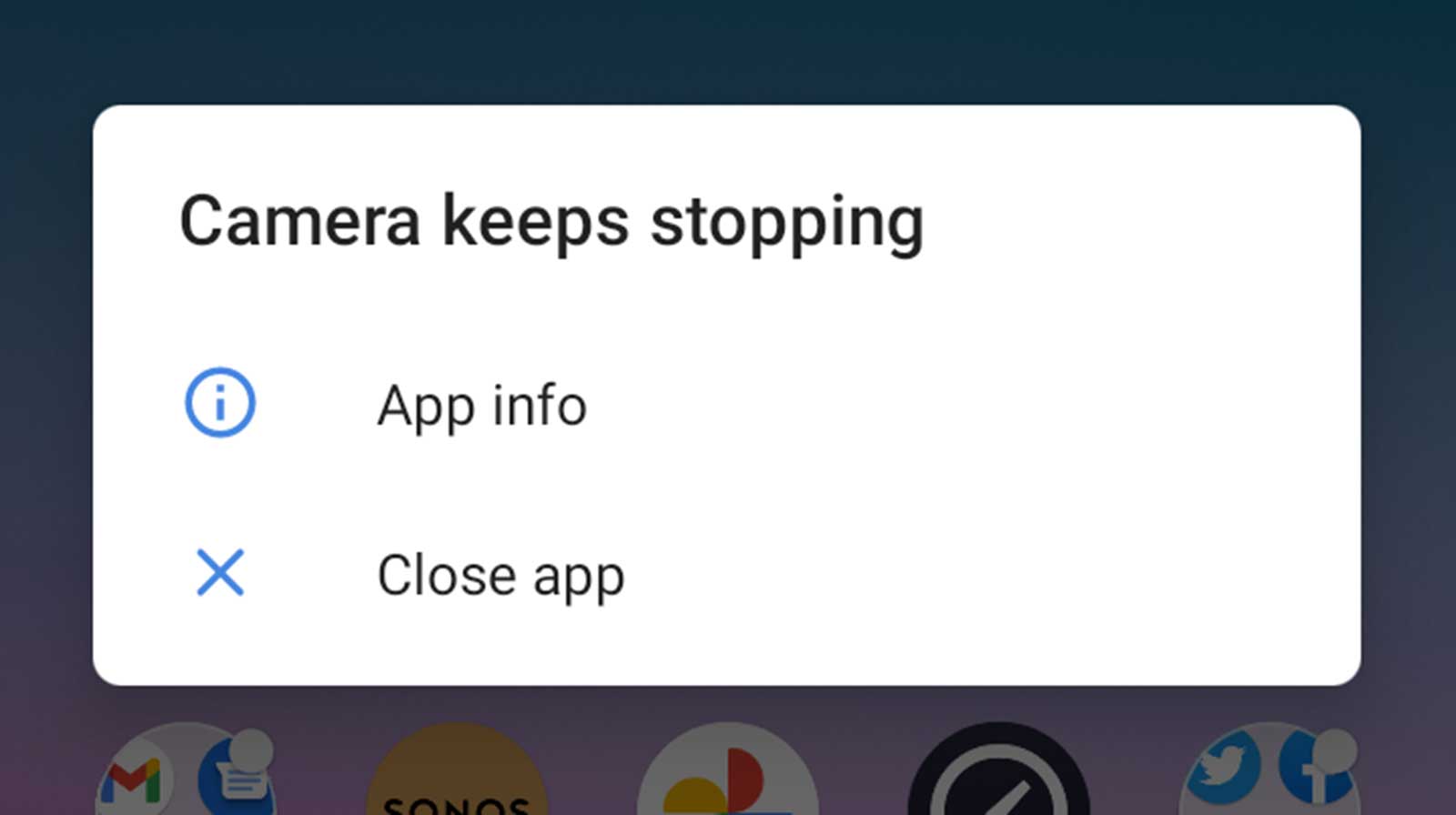 But that’s only one of the problems with the Nokia 5.4 camera, which is acceptable in daylight and even delivers some not-too-shabby portrait images helped by a secondary depth camera, but that overall feels like the price tag: budget-focused, but certainly not brilliant.

The main 48 megapixel camera seems like something we’ve seen before on at least one phone, and here on the Nokia 5.4, it’s acceptable, though not necessarily the best around. Daylight is nice, night time is okay, too, though there are certainly better sensors out there.

Yet for as good as the main camera can sometimes be, the rest of it is just so meh. The 2 megapixel macro camera is soft and never appears to be sharp at all, something other manufacturers can get right. The imagery appears quite up close regardless, and you’re really never seeming to get a sharp shot. And there’s a 5 megapixel ultra-wide that isn’t amazing and tends to blur the edges of everything.

At least the 16 megapixel selfie camera is acceptable, but the problem with the Nokia 5.4’s camera might be the speed more than anything else. Frankly, it’s just slow to fire, often taking a half second to a full second, and sometimes more, all just to trigger the shot. It’s a result that just doesn’t scream “finished product” at all times. 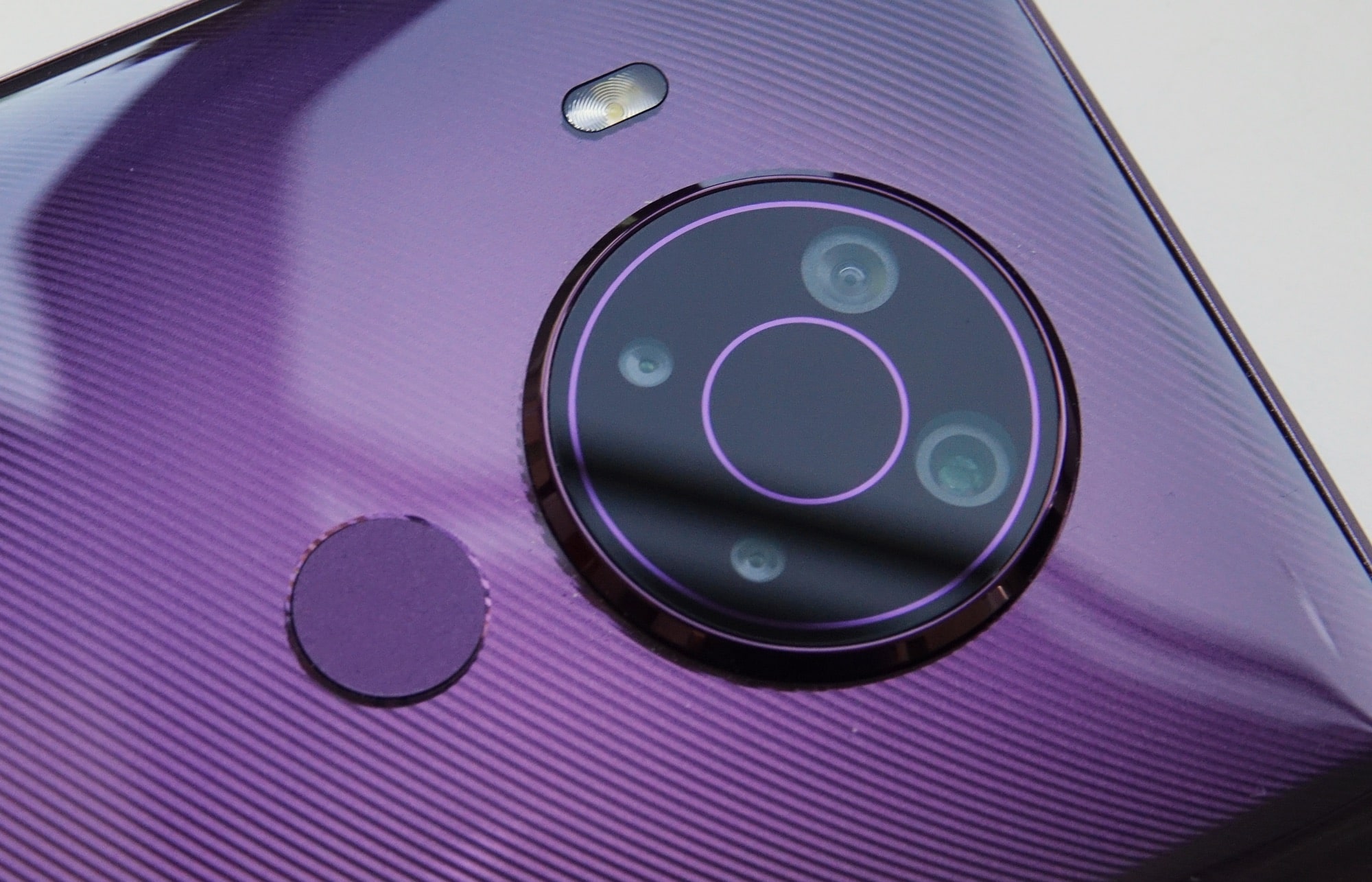 The one saving grace of the Nokia 5.4 might be the battery, which can achieve two days of use, depending on how you use the phone, of course. Thanks to those performance hiccups, you may find yourself using the phone a little less, and that can help the battery life to last.

As such, we found the Nokia 5.4 battery technically hit 48 hours, though through what was basically four hours of screen time for the phone. 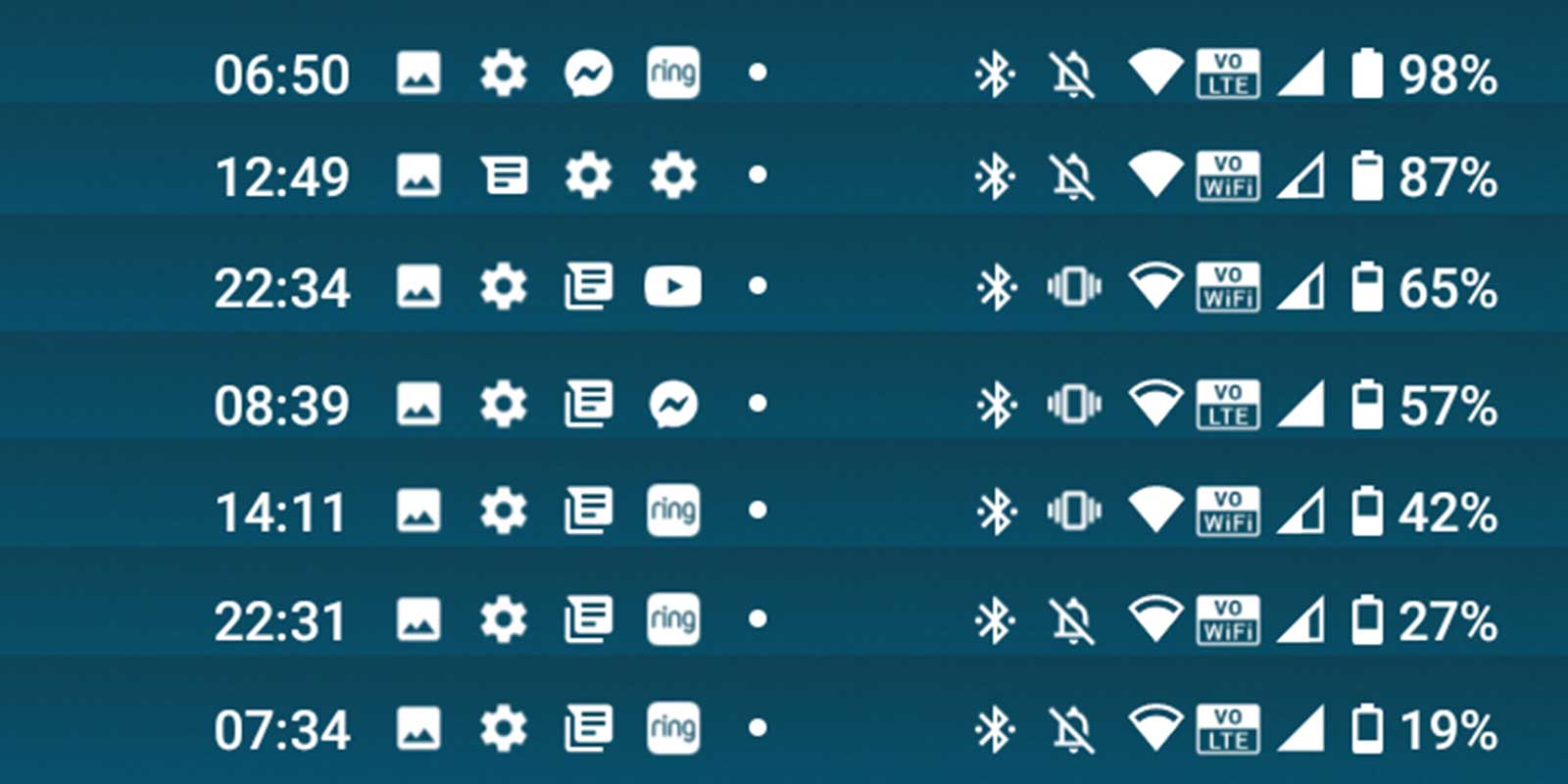 And it comes in a phone that hits $329 in Australia, which can feel like decent value given what you get.

There’s 128GB storage and support for Near-Field Communication, which means Google Pay is included, as well. We’ve not regularly seen both of those features at this price point, which is part of what makes the Nokia 5.4 so compelling, at least on paper.

But while the value and battery life can help make the Nokia 5.4 worth checking out, there are some caveats worth remembering.

For instance, there’s the screen: while the 6.39 inch display is fairly sizeable, and big enough to hide the 4000mAh battery underneath, Nokia has opted for an HD+ only screen running at 1520×720, and one that loses its look quickly at angles. It’s not a terribly low-end screen that washes out at different angles, something cheap phones typically see, but it doesn’t look fantastic unless you’re looking at it dead on, which makes us wonder about the quality. 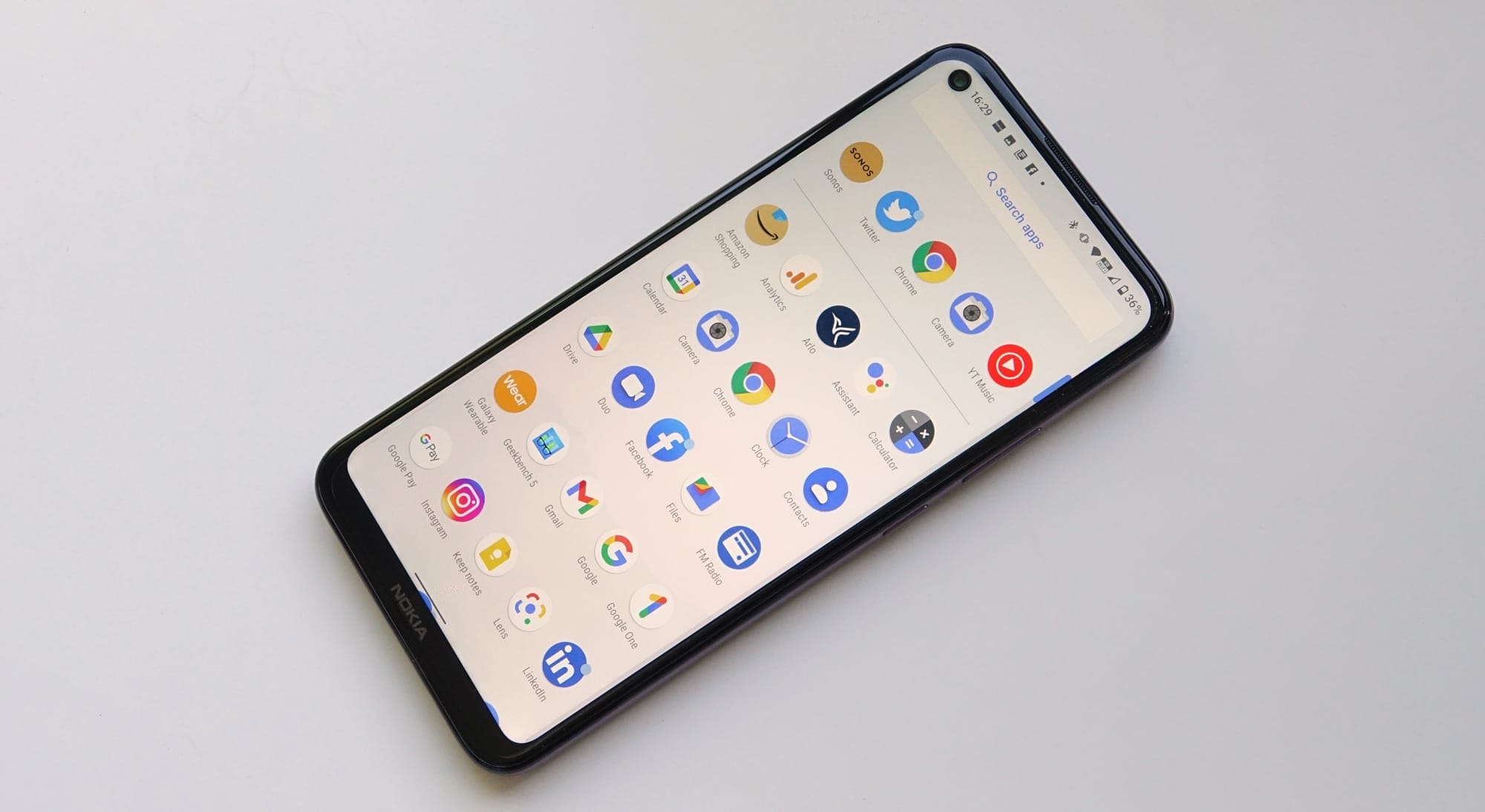 The camera issues are also a thing, particularly the speed and the regular crashes. The former we expected, but the latter we did not.

In fact, speed is a general problem for the phone, which can perform well at 70 percent of the time, but then struggle the remaining 30 percent. Knowing your luck, you’ll feel it worse just when you’re doing something, like trying to jump from one part of an app to another, or trying to pay for something using Google Pay.

The main problem with the Nokia 5.4 might just be that it hasn’t been balanced as well in real life as it might have been on paper. 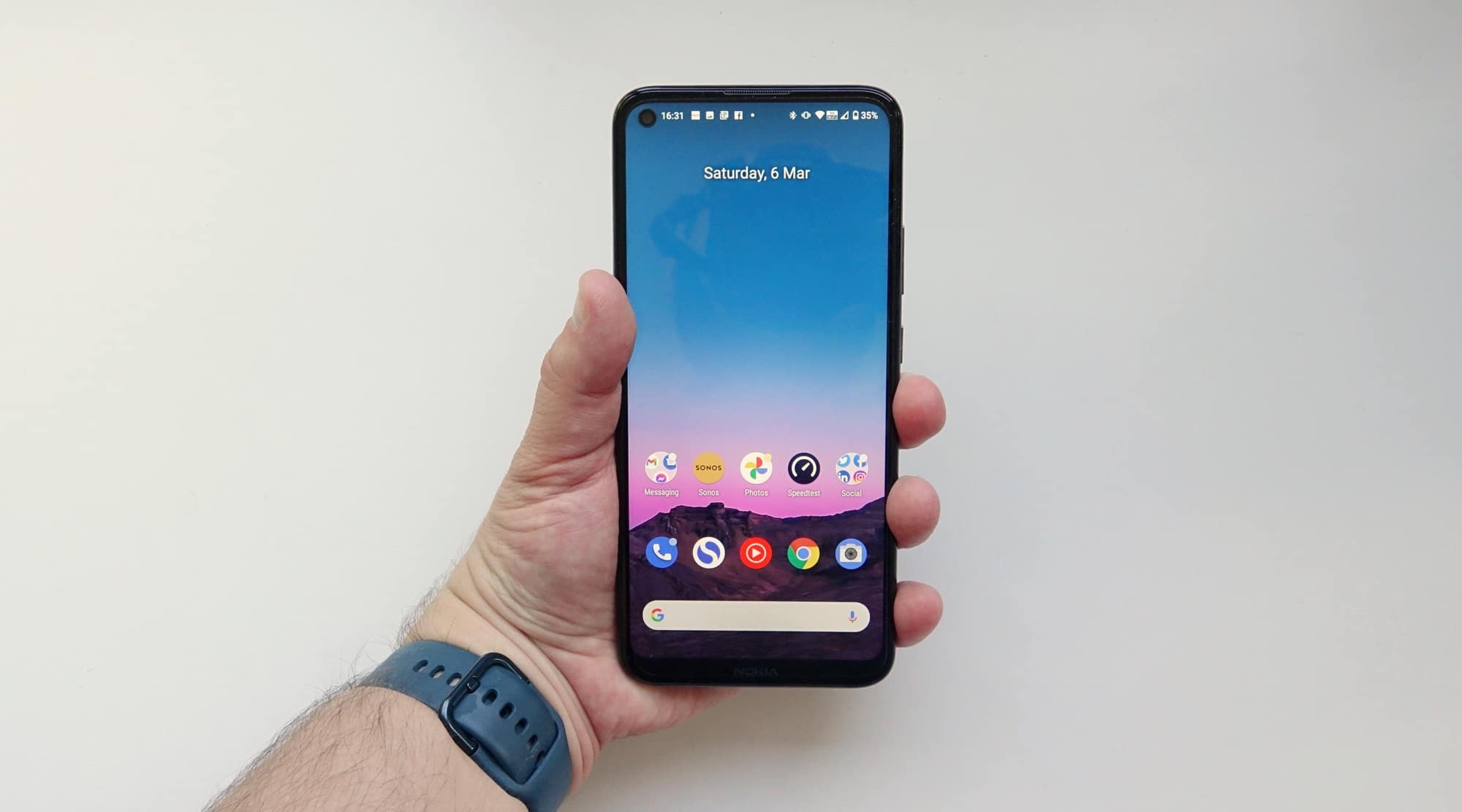 That may end up being the biggest flaw of the Nokia 5.4 we learned from our review time with the phone: this is essentially budget balanced by compromise.

On paper, the Nokia 5.4 is an exciting proposition, with a big screen, big battery, several cameras, NFC, and Google’s mostly stock OS, Android One. In reality, though, the practicality of the phone is that it doesn’t quite deliver a perfectly balanced experience, not in the way that some other budget phones have achieved. Almost, but not quite, it seems. 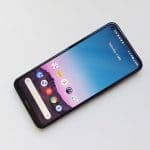 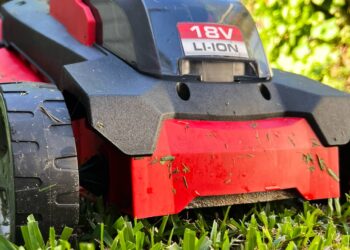