On a Sunday afternoon in lockdown, we cracked open a box of Lego, and the four year old and a reviewer got to work.

She — the four year old — had never played Mario in her life, but with one Lego set, she was intrigued, as Lego found a way to convert the classic for a new generation.

Video games have come a long way over the years, but you can’t beat the classics. Some of these are still going strong, either with emulation on their new consoles, new titles with the respective classics, or even a reinvention of the classic console.

In short, retro is in, and with it, the old gamers can come out of the woodwork and show a new breed of gamers what they’re missing.

That group is largely what Lego Super Mario feels like it has been focused on: old and young, if you like building Lego and you like Mario on the 8-bit Nintendo Entertainment System (NES) or the 16-bit Super NES (SNES) equivalent, or any of the subsequent consoles that Mario has been featured on, this may well be the toy for you.

Marrying the classic Lego block building we’ve all grown up with and the familiar Nintendo mascot hasn’t just been about making a level for Mario and Luigi out of blocks. Rather, Lego has found a way to connect the dots, bringing a few small screens and speakers to an avatar you can control with your hands. 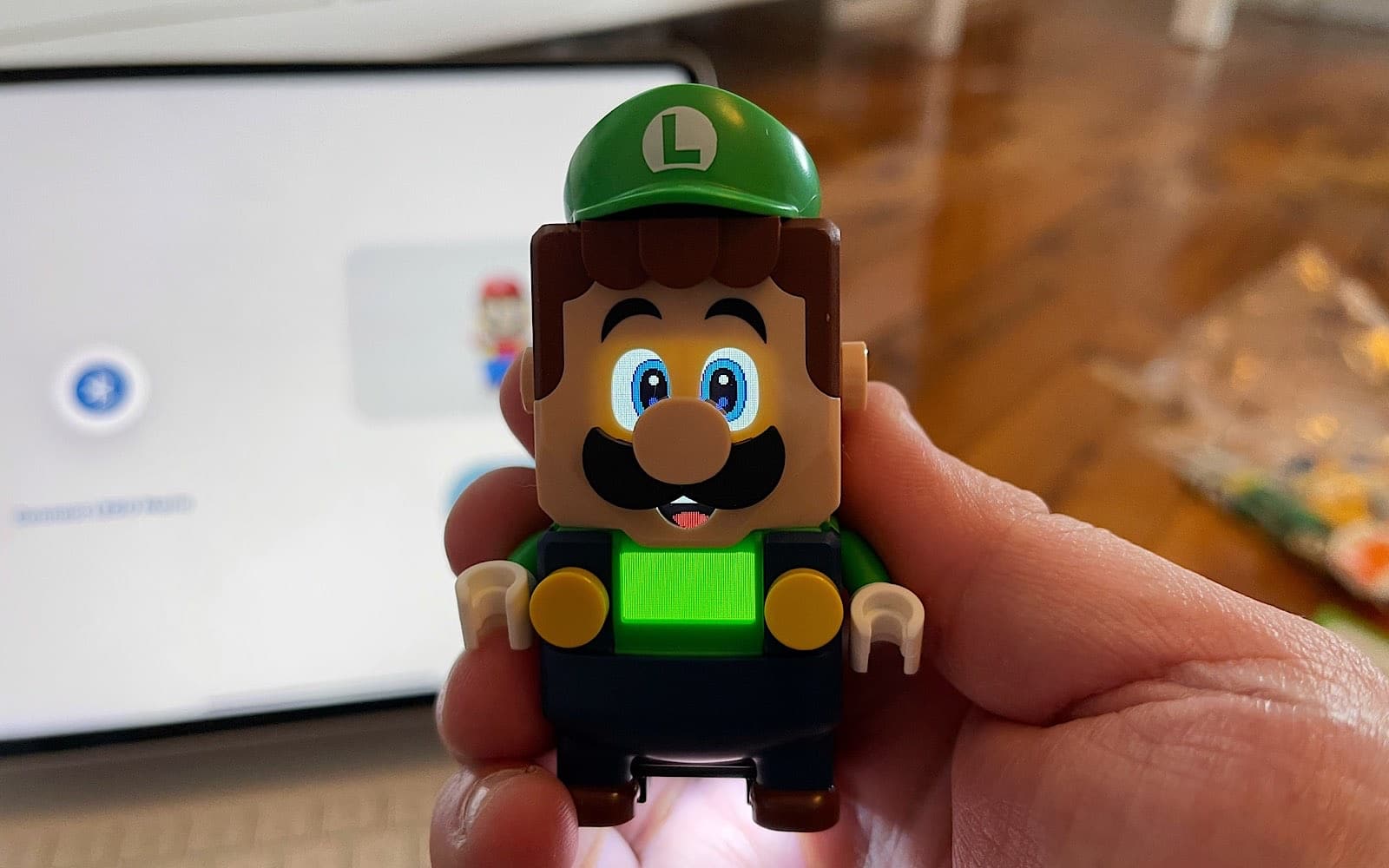 While most Lego is your typical build-a-block system that we’ve all grown up with, Super Mario’s flavour of Lego isn’t just inspired by the Nintendo icon, but plays out a little like one, too.

That’s because Lego has made it more interactive than just building the world of Mario and Luigi in Lego, involving a little bit of technology, too.

We tested out the newly introduced sidekick Luigi, having missed out on Mario last year, and while we didn’t get the red-hatted icon, our sidekick was just as cool, appearing with his trademark green hat and a play set including pink Yoshi and Boom Boom. You’ll find those two characters in the Luigi Starter Course, as well as a few platforms to work from and a Goomba (if this reads as another language, just look at the old Mario Bros games), though the only Lego character with any real powers is one of the Mario Brothers to begin with. Open the back of Luigi and you’ll find spots for two AAA batteries. Throw them in, do up the screws, and switch Luigi on, and you’ll be able to pair him with a phone or tablet, connecting with the Lego Super Mario app. From there, it’s as simple as following the instructions and landing on colours and barcodes to get Luigi to do things.

To make this work, Luigi seems to have a colorimeter and small scanner under his bottom, as well as a couple of bright LEDs shining a light where the sun typically doesn’t shine.

Shine it on specific colours and the screen behind his eyes and on his belly will do things. Yellow will show him on sand, blue on water, red on fire, and purple on a sort of ooze that makes him feel sick. Barcodes will have Luigi do other things, such as bounce on enemies, get coins, and even flag mystery boxes with mushrooms, stars of invincibility, and yet more coins.

One barcode even starts the game, because that’s what Lego Super Mario is: a physical game. 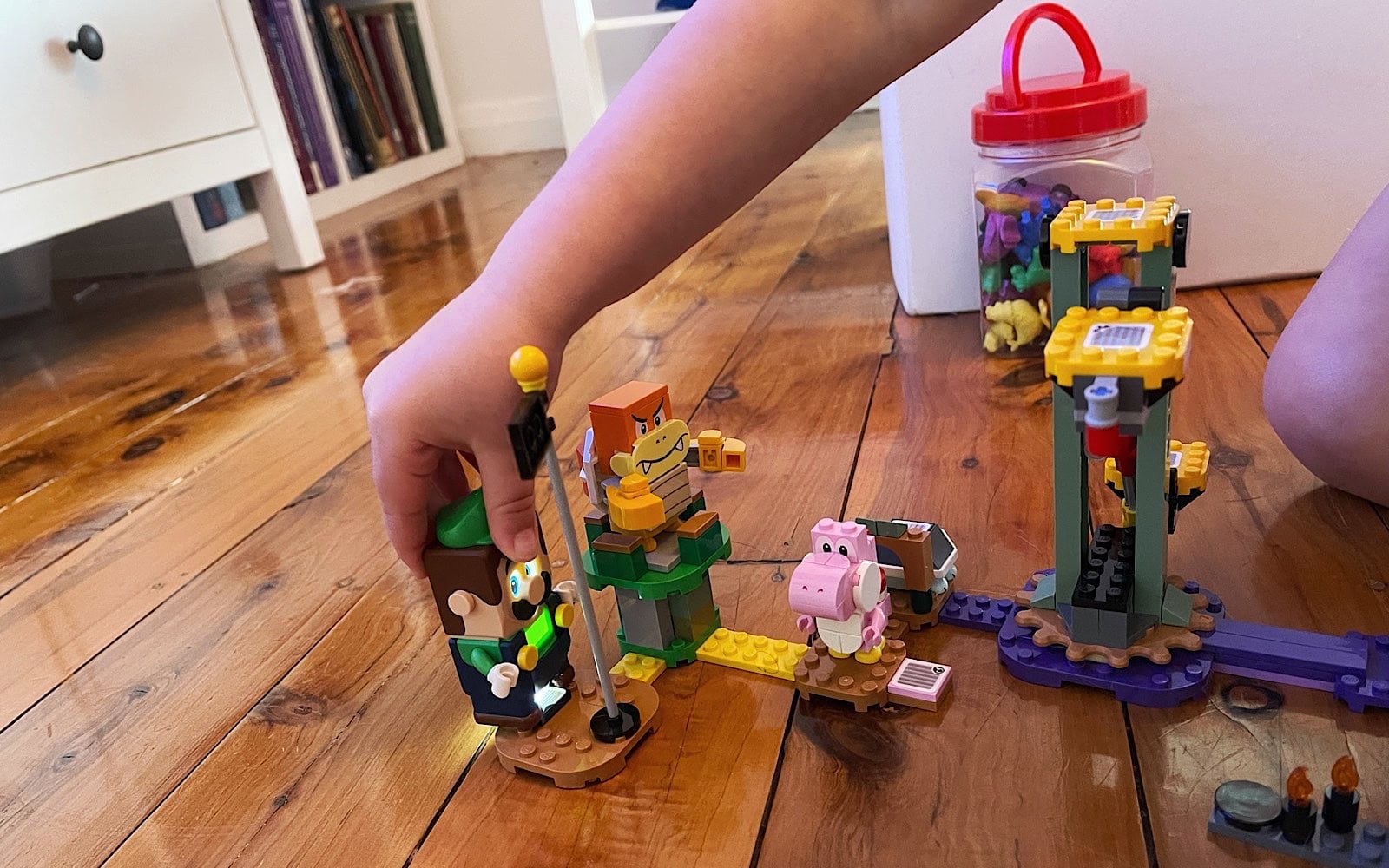 A different take on a video game, Lego Super Mario has you assemble parts of a Mario Bros game and then play a speed run of sorts, using your digital Mario or Luigi and physically bouncing on bad guys, platforms, mystery boxes, and finally the end.

It’s very much a make-your-own level of Mario, provided you have all the parts to make it your own. That might require several sets and maybe some of the packs, but it’s a little fun, and something that connected with the app.

Lego’s app is the only way to build most of these sets, using it to look at the instructions in multiple angles and making the kits clearly, but it’s also a way to integrate your Mario brother with what he does in the real world. You see the interactive Minifig doesn’t just have a sensor, but also has support for Bluetooth, talking with your phone or tablet and sharing what it’s doing.

Jump on a barcode and the app will log what’s happened, and if you receive extra coins, you’ll get that, too. Make your way to the end of a course and raise the flag, and the app will acknowledge that, all while the little speaker and screen recreate the classic sounds and 8-bit looks of Mario and Luigi from back in the NES days. 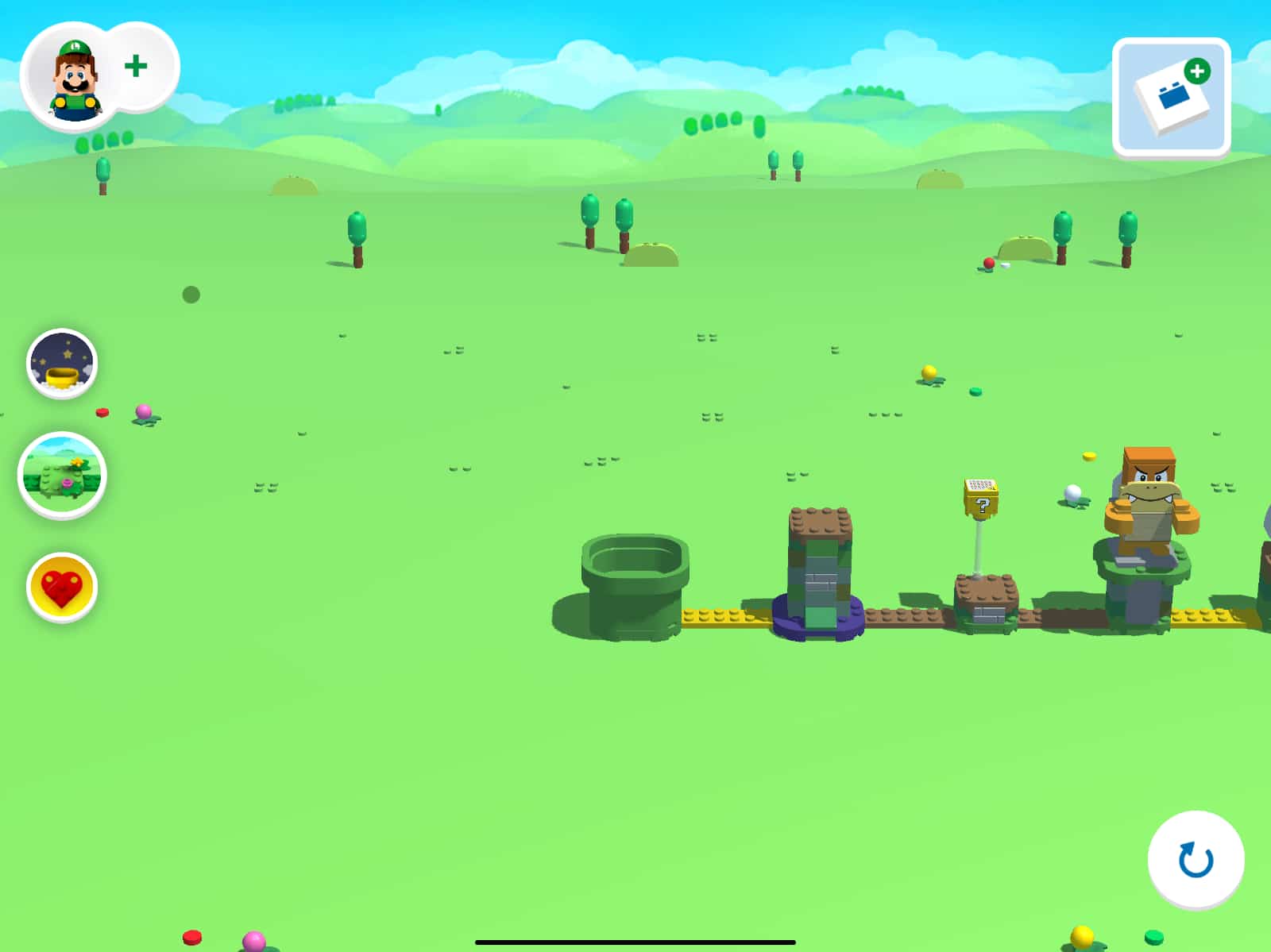 The app is therefore a part of the experience, and even has like extras, giving you extra chances to win in-game coins and share with other Lego fans, not unlike what Lego Vidiyo delivers on its augmented reality music video sharing network.

Without the app, Lego Mario is still fun, and begins with holding either Mario or Luigi over an assembled green pipe (because of course it does), which starts a 60 second timer for you to have him run and jump over characters, bouncing them, getting more coins, and seeing what you can amass. It’s basically your own personal physical speed run with a digital toy, which does some neat things altogether. 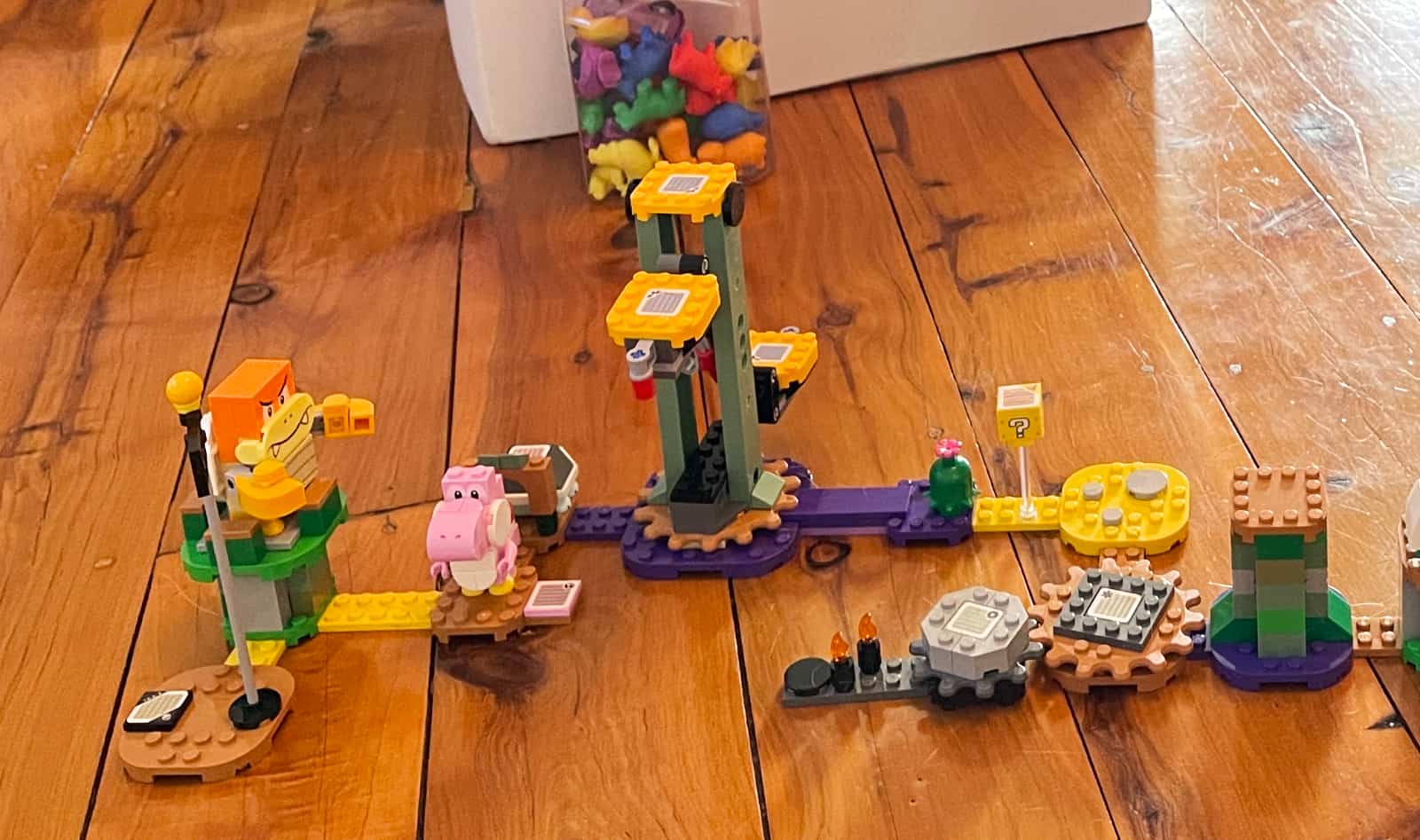 There are some cute things Luigi does that make the interactive gaming experience a treat, things like having Luigi fall asleep when he’s not being used and making little noises at other times.

It’s a cute way of bringing the characters to life, but we’d love it if you didn’t need to rely on disposable batteries for that semblance of life. These days, rechargeable batteries are very much in, and so we’re surprised Lego didn’t just opt for a Type C USB port at the back and a battery you can’t remove. It feels like it would have been the smarter decision long term.

Our other quibble comes down to the price, because Lego Super Mario can get costly. 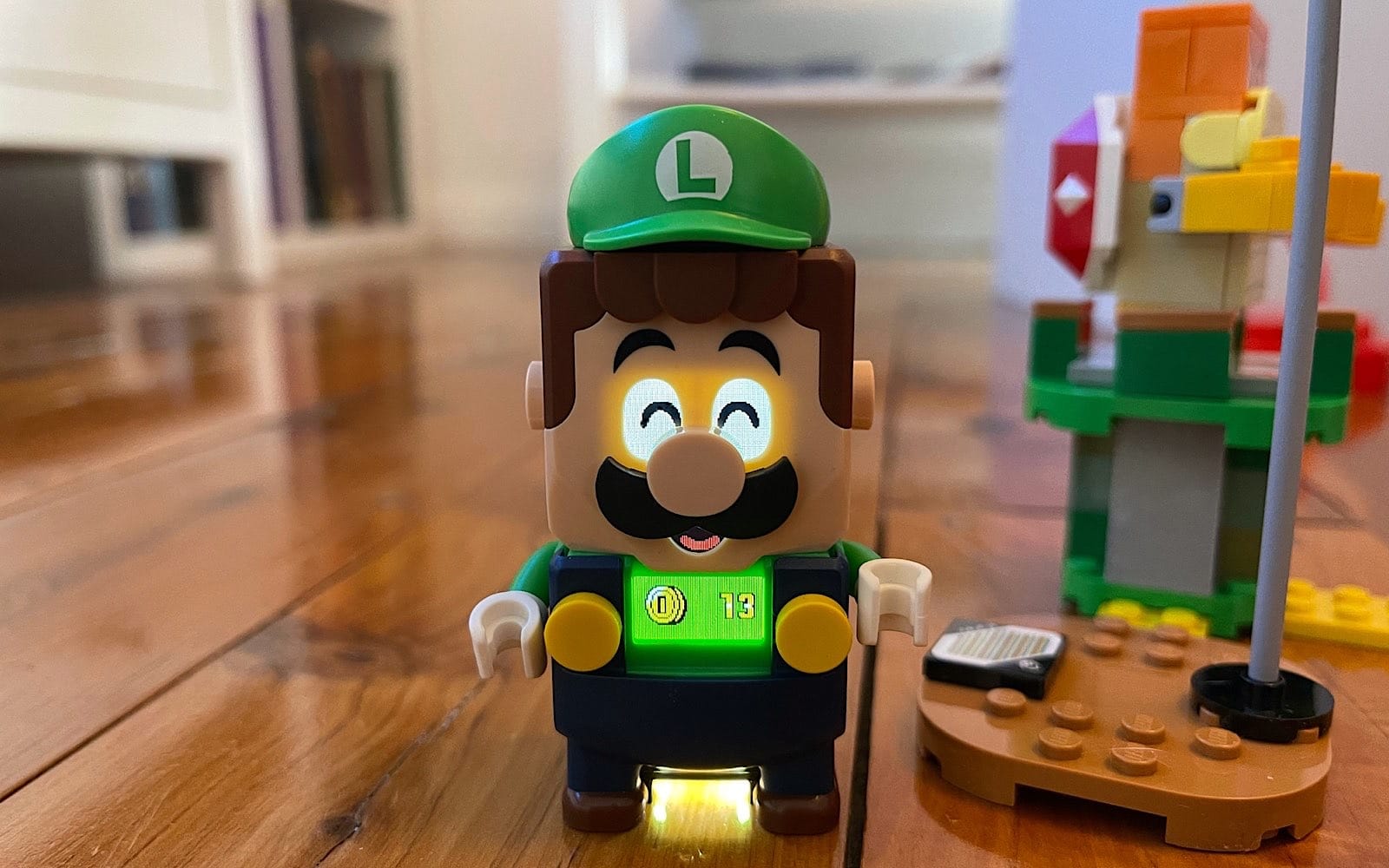 Starter kits for Lego Super Mario cost $79 in Australia, offering a choice of either Mario or Luigi and coming not just with Lego parts of a level, but also with a digital main character. That’s a digital Minifig of sorts, offering a screen for each eye and a screen in the centre of his overalls, plus speakers.

You need the starter to play, because you need either Mario or Luigi. However if you want to expand and include more parts of a level — more scenery, more friends, more bad guys to jump on — you need to buy more Lego, and that’s where the costs can start to add up.

Prices for the Lego Mario packs range from $12 to $99, with a big level essentially being made up of as much as $200 to $300 worth of Lego, depending on quite how big you want to make it. That’s not a small amount, and means this physical interpretation of a video game can become quite expensive.

You don’t need to spend that much, however, and can get started using the starter pack, making it a minimum of 80-odd dollars to play.

At under $100, we think Lego Mario might be worth it, but you’d have to be pretty dedicated to want to spend more. It wouldn’t take a whole lot of dollar-bucks more to get Lego Mario to cost a whole heap more than the games they’re modelled off. 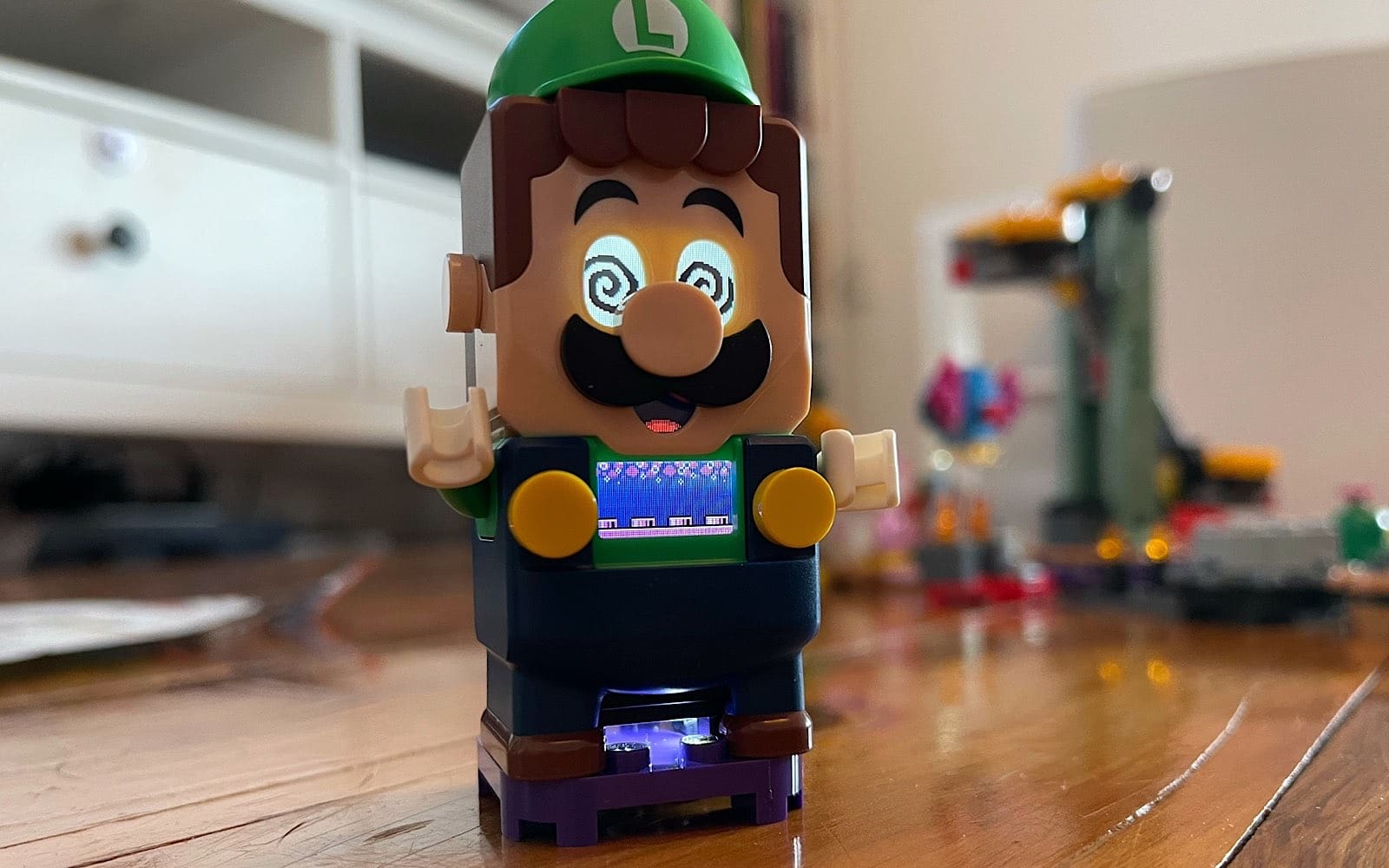 For the price, however, what Lego has created is a bit of fun, and one that gamers both old and young can get into. This is retro fun for the family, and something a little bit different, too.

You’d be hard pressed finding someone who doesn’t like Lego, and you might struggle to find someone who doesn’t recall the fun of a Mario game. This is just blending the difference, and making something fun for everyone, be it oldies who recall the game fondly or newbies keen to see what the fuss of Mario is all about. Recommended. 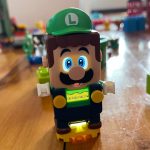 Lego Super Mario (Luigi Starter Course)
The good
A fun style of interactive Lego
Cool use of colour and barcode sensors
Mario Bros figures can be used not just on Lego, but on colours of all kinds
Digital instructions in the app are a neat take
Fun for kids and adults alike
The not-so-good
App is the only way to build the Lego
Could get expensive to build a set and level
Minifigs require two AAAs and aren't rechargeable
4.3