Finding a tablet for you or the kids isn’t always easy, but at $499 and with more than lastly year, the 2021 iPad could well be the answer.

Glance around at the world of tablets, and it might be hard to find something that delivers value. There’s plenty happening in the high-end if you’re keen to spend a pretty penny, and there are also budget options, but you mightn’t find the definition of “value” in either.

Cheap is cheap and premium can sure be quite premium, but is anything close to straddling the middle ground between both, and able to deliver a great definition of value?

Believe it or not, Apple may have it, and with its 9th-gen iPad — what is ostensibly the 2021 iPad — value might be the best reason to consider this $499 tablet, as it nails the word in pretty much every sense of it.

You won’t see a fundamental design shift, mind you, because Apple is bringing much the same aesthetic we’ve seen for the past few years in this year’s model.

It’s another metal bodies design with fairly minimalist frames on the front, and a look that still comes off as premium, certainly more so than the cheap plastic look many budget tablets provide.

While the design is identical, there are changes, though you’ll have to know what you’re looking for.

There’s an updated chip here, with the iPhone 11’s A13 Bionic appearing on the 2021 iPad, supported by either 64GB or 256GB storage, and arriving with WiFi or WiFi and 4G, depending on how much you want to pay.

WiFi is supported up to WiFi 5’s 802.11a/b/g/n/ac alongside Bluetooth 4.2, with two cameras also found on the iPad 9th-gen, using an 8 megapixel F2.4 camera at the back and a 12 megapixel F2.4 camera at the front, the latter of which supports Apple’s positioning technology “Centre Stage”, something the company first rolled out on this year’s iPad Pro. 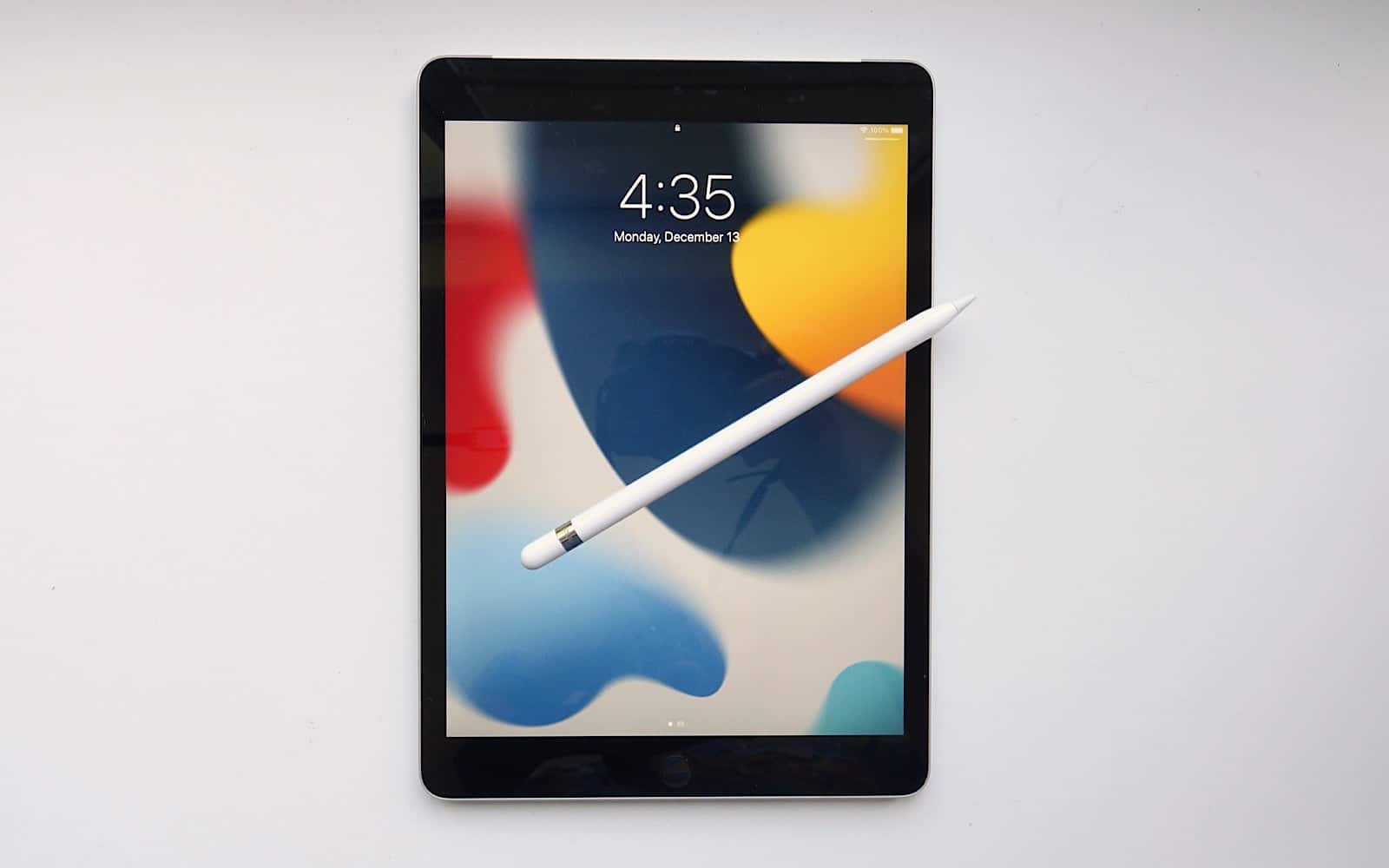 All of this sits under a screen in which has seen only modest changes, remaining much the same here. It’s largely the same 10.2 inch LED-backlit IPS panel as last year’s 8th-gen iPad, with the same 2160×1620 resolution and support for Apple’s 1st-gen Pencil accessory, though there is one major change worth talking about: True Tone.

If you’ve used one of the recent iPhone models, or even a MacBook, you’ll probably have seen this in use, even if you don’t exactly know what it is, with this technology detecting the colour temperature of the room and then adjusting the colour of white on the iPad to accommodate. It means that instead of always seeing a harsh white, it may warm up in tone to deal with the colour and light in the room, and means your eyes won’t suffer, adjusting to things more clearly.

It’s a welcome addition to the entry-level iPad, and one that makes using this model that much better overall. 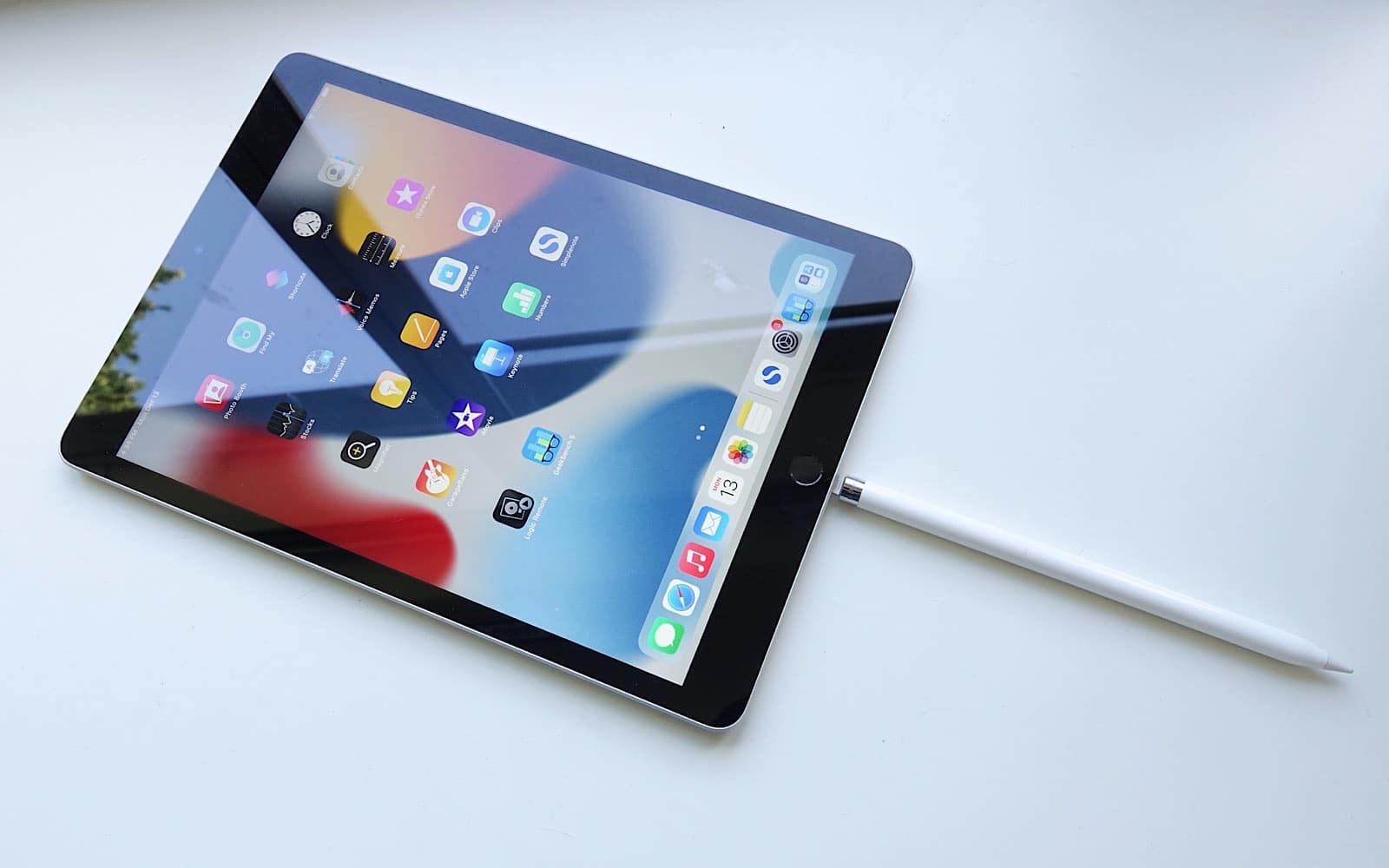 Using the iPad 9th-gen is about the same as it was last year, though, and while True Tone helps you to use the screen in any environment, it’s still the same process overall: touch, Apple Pencil, or a keyboard, be it one that uses the Smart Keyboard connector on the side or a Bluetooth keyboard from a variety of manufacturers.

You may not need the keyboard, mind you; Apple’s screen is still fairly snappy, and even if you type like a cat mashing away at the buttons on a keyboard, the iPad screen is typically decent at catching your on-screen keystrokes, too.

New to the 2021 iPad, however, is a chip, with the A13 Bionic upgrading the A12 from the 8th-gen iPad, the same chip you can find in the iPhone 11 Pro Max and other iPhone 11 models, as well as the iPhone SE released last year.

It’s a capable chip, but a minor update in the grand scheme of things, and two generations down from what’s in the most recent models, the iPhone 13 range.

Benchmarks are unsurprisingly close, but we found the iPad 9th-gen seems to have a little more to work with in the graphical department, essentially meaning games should be as capable as what an iPhone 11 Pro Max can do, if not a little more.

That’s great news for folks who may want to play a few games on Apple Arcade, or even something else, and basically arms the entry-level iPad with similar performance to what can be found on an iPhone still nearing the $900 mark in Australia.

Expect the same battery life as the previous iPad, mind you, with up to 10 hours of battery life for video or productivity, which in our tests translated a little differently.

It meant if we used the 2021 iPad very often in the space of a day, we’d charge it nightly, otherwise if we used it infrequently for a few hours each day, we could actually get two or three days out of it. 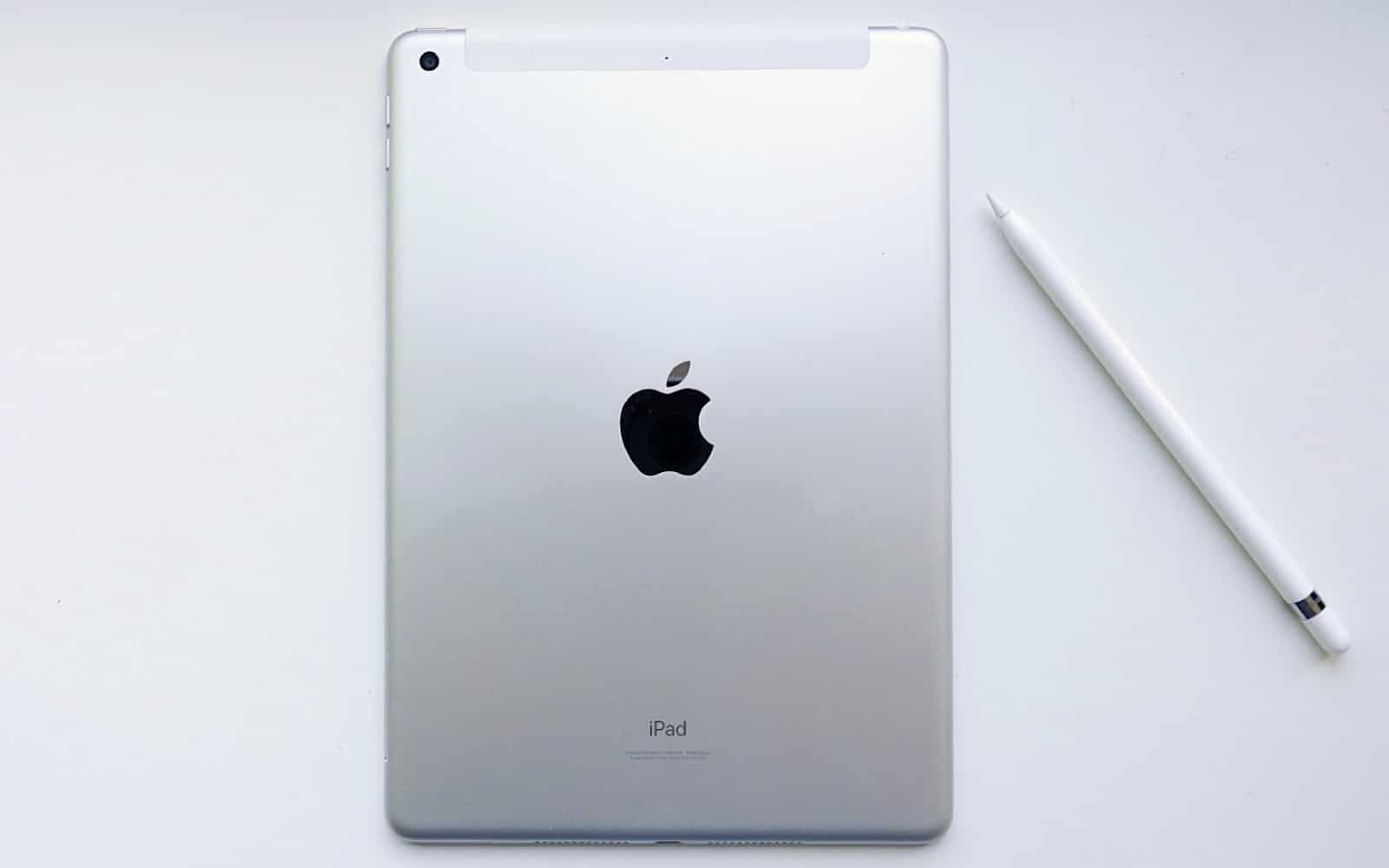 Our favourite aspect has to be the value, because this is one area where Apple just leads, and may have actually improved things in the 2021 iPad.

The 2021 iPad is extraordinary value for a tablet that performs this well, and a device you can grow with.

What’s missing is something Apple just doesn’t account for, but something we go on about in every single iPad review. Every single one.

We’re going to keep mentioning this, but this iPad — much like every other iPad — still doesn’t feature water resistance as a feature. It’s just not there.

It’s strange, because you can take your iPhone to the beach or a Kindle to where the water is, but you still can’t take an iPad and worry if an errant splash will be the death of it.

It’s not as if water resistance is new to tablets, either, with Sony and Samsung having both incorporated it in the past, but no one following suit since. Even Samsung has taken the water resistance ratings away from its recent tablets, which is genuinely a shame.

Apple still doesn’t see the iPad as waterproof, and neither should you, but it’s the one feature we think would perfect the iPad. 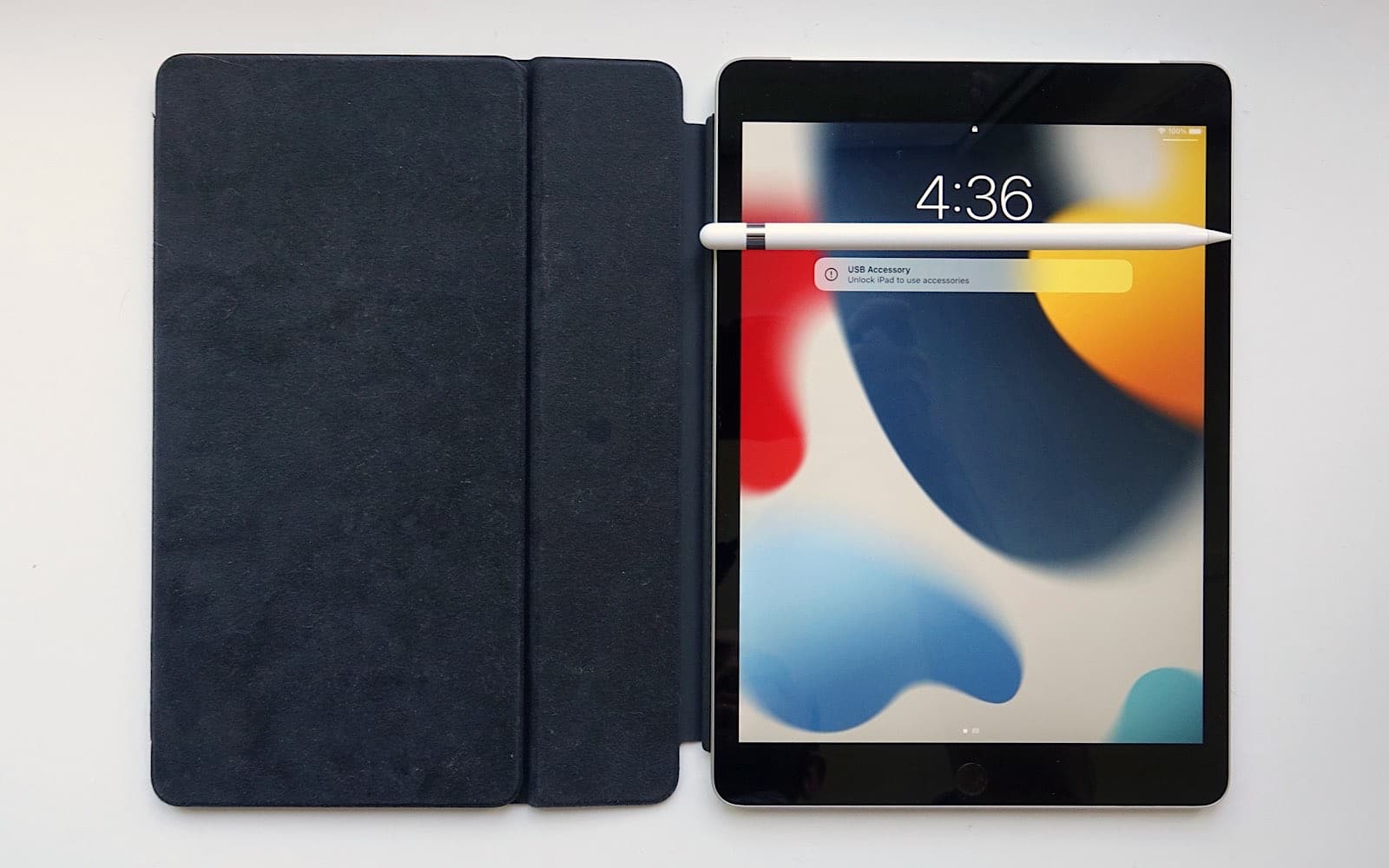 Despite the omission of water resistance, Apple’s 9th-generation iPad is still one of the best tablets you can get your hands on, because it’s just so freakin’ good.

It isn’t the best performing of all the tablets out there, for sure, but it doesn’t need to be. This is Apple delivering value in spades.

You get a great screen with a slight improvement, twice the storage, and just as excellent a package as last year’s model. It’s still the best value tablet around, hands down. Highly recommended. 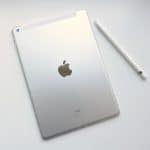