A wireless headset boasting days of actual battery life? You might think we’re dreaming, but the Sennheiser GSP 370 makes it happen, albeit with a caveat or two.

We’re living in a wireless world, and you only need to look at modern headphones to get a glimpse of that. Headphones and headsets are mostly cordless these days, particularly if you’re looking to spend decent dollars.

Typically made for phones, tablets, and computers, wireless sound means getting audio to your ears from your device without being impacted by a cord, allowing you to move around freely unencumbered.

Wireless sound needs a decent battery in the headphones, of course, because working without wireless requires power for the headphones and wireless system. These days, the batteries on wireless headphones can stretch past a day of non-stop use, which in real-world terms gets you a few days, once you translate it to a max of eight hours a day.

But what if you want more? What if you yearn for a pair of headphones that can give you days stretching into weeks? It doesn’t have to be a dream, and Sennheiser is demonstrating it with a pair of wireless headphones made for your computer, the GSP 370. 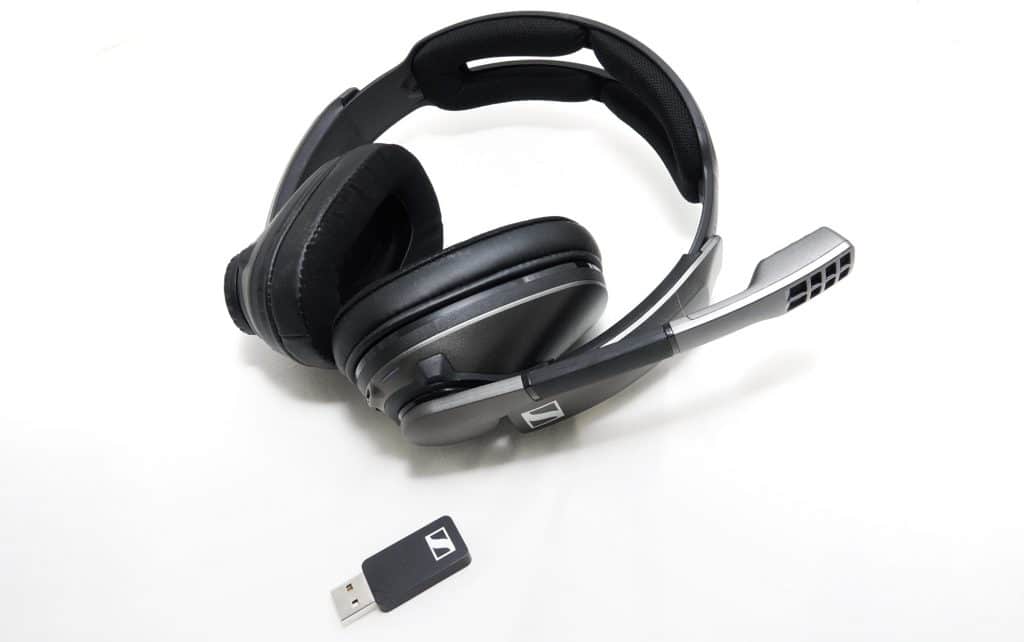 Design-wise, the Sennheiser GSP 370 are a little bulkier in design, with large plastic struts connecting large plastic earpieces, which fit together almost like a Doctor Who Cyberman headset which was made from dark plastic compared to the bright metal the show typically depicts them as. 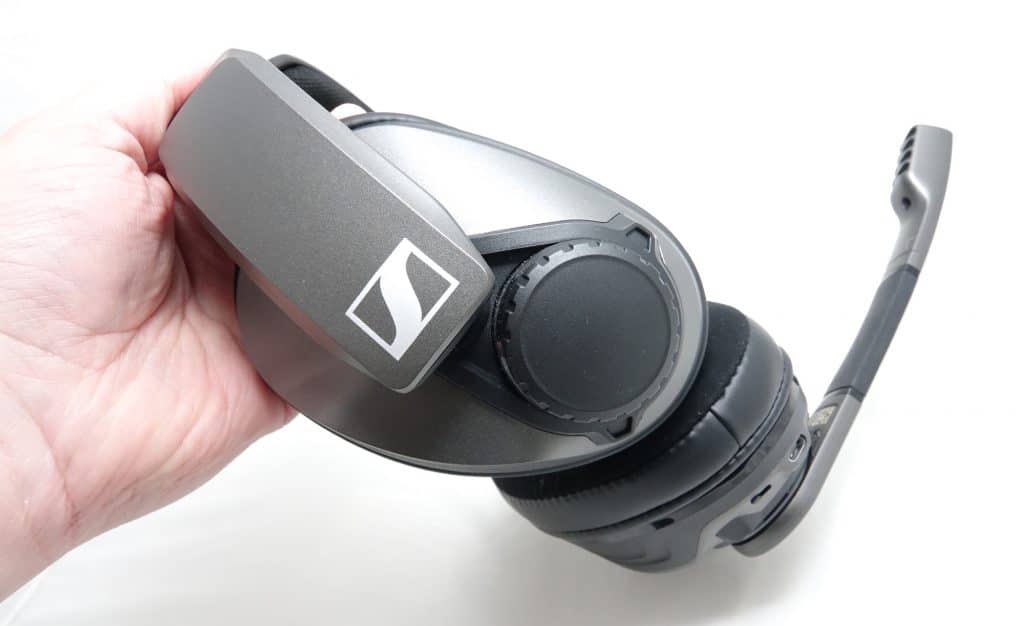 There aren’t a lot of controls for Sennheiser’s GSP 370 wireless headphones, and it’s a fairly straightforward installation, too.

Remember the whole idea behind “plug and play” being that you plug it in to play with it? Well that’s pretty much what Sennheiser has built here.

Simply plug in the USB dongle the GSP 370 arrives with, and your headset should be good to go. It’s a standard USB (Type A) plug, so if your computer is so new that it only has the Type C ports, you’ll need to bring your own converter, and there’s no other way to connect to these. Really, it’s Sennheiser’s Type A plug or nothing.

However computers check into it quite quickly, though it’s clear Sennheiser is a little more friendly to Windows computers than a Mac. There’s a little sound software package Sennheiser has made that adds surround sound capability and some noise cancellation for the microphone, but it’s only available for Windows PC. Sad face. 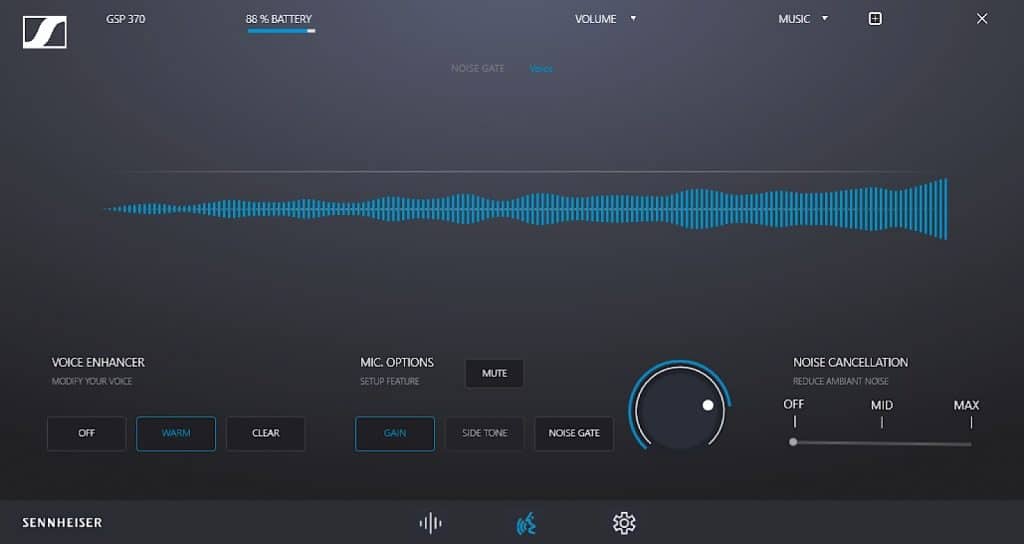 Regardless of whether you use Sennheiser’s software to trigger sound presets or just the built-in driver on your computer (Mac users don’t get a choice), you should find a volume dial on the right side of the headphones just below the cup. That’s a neat way to let you dial in or back the volume all too easily, and is a handy inclusion.

Outside of this, there’s simply wearing the Sennheiser GSP 370, which despite their otherwise large and cumbersome design tends to deliver a comfort we appreciate over long periods of working, writing, and even a bit of gaming. Big plushy ear pads offering a circumaural design are a highlight, providing a seal from the outside world and little pressure that we could feel from the headband construction. These headphones are what we’d call comfortable for sure. 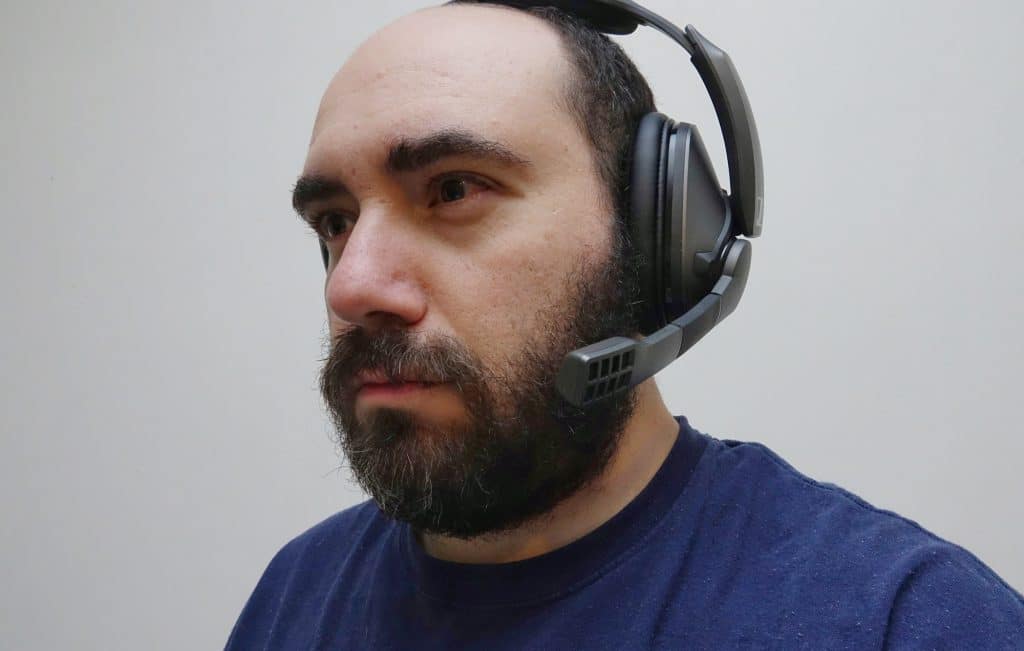 Wearing them is one thing, but how they sound is probably more important. After all, Sennheiser’s GSP 370 headphones aren’t clearly going to win a fashion show, and the needs of the USB plug mean you’ll be wearing them for something particularly, namely the sound from your computer.

Testing with the Pickr Sound Test, we found Sennheiser’s typical approach to sound, which is invariably balanced across the mids, lows, and highs, with enough bass to make us comfortable without blowing our ears out.

Initially, our testing began on the Mac, which is where Sennheiser’s software suite doesn’t work. However, the Sennheiser GSP 370 works flawlessly on either operating system, while the driver allows for easy integration with the operating system’s volume control. 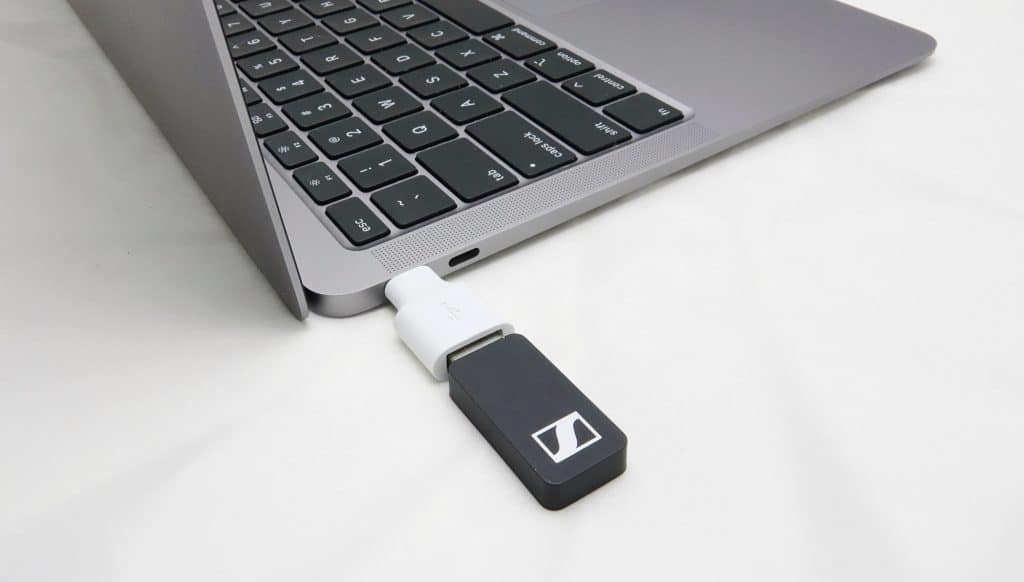 There may be no noise cancellation built in here, but the headphones still pack an impact, with the tracks in our bassy playlist pushing the sound quite well, while our regular Pickr Sound Test reveals balance aplenty. Daft Punk’s “Contact” is smooth with solid mids and highs, plus reasonable punch from the percussion, while Rage Against The Machine’s “Take The Power Back” drives the sound aggressively and with the bottom end you’d expect the song to have.

Over on Windows with the software suite engaged, we found a little more oomph, though the virtual 7.1 experience that Sennheiser lets you have tended to overemphasise the surround a little too unnecessarily for our liking.

Overall, however, the sound was quite solid in the GSP 370, and Sennheiser really delivers. These are great sounding headphones for your PC, for sure. 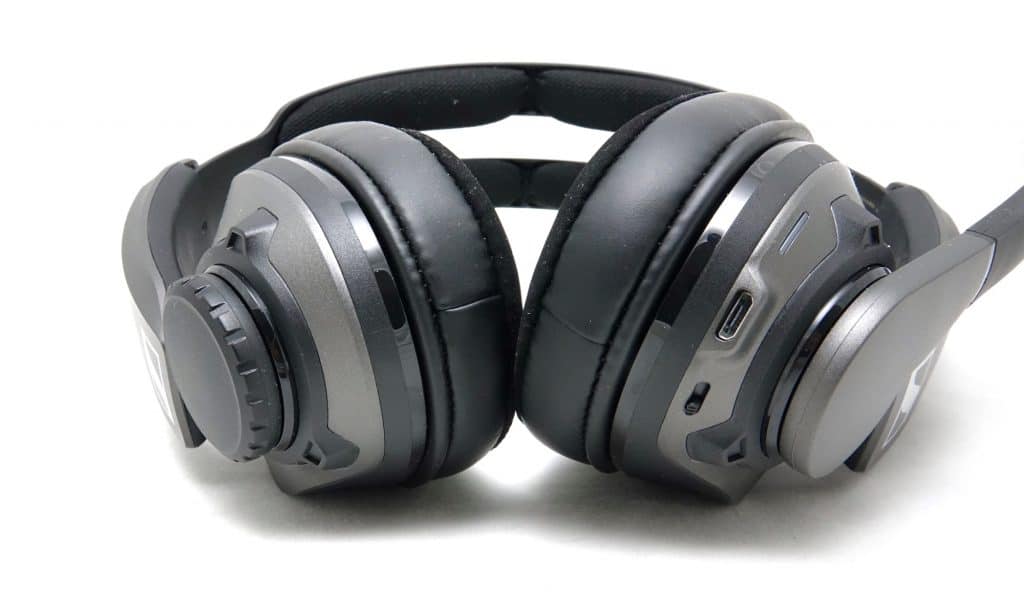 While the design means they’re not likely the type of headphones you’re going to want to wear outside, the Sennheiser GSP 370 still comes with a pretty solid battery, boasting up to 100 hours of life.

The reality of that is pretty much one where you won’t have to charge it for weeks — genuine weeks — provided you stick to using it for only a few hours a day. At one point, we realised the GSP 370 hadn’t been charged for a good two weeks, the battery was that good.

It’s a staggering result, and one that keeps you away from a microUSB port for charging, and yet close enough to your computer without needing a cable.

And at a price of $349, Sennheiser’s take on a headset isn’t cheap in the grand scheme of things, though it’s also not terribly surprising.

Sennheiser is well known for its sound expertise, and the GSP 370 is clearly delivering the company’s understanding of audio alongside some seriously impressive battery life.

That said, in this sort of price range, we’d hope for a little more flexibility in terms of what the headphones do and how they connect, because right now, these are $350 headphones made for your computer. 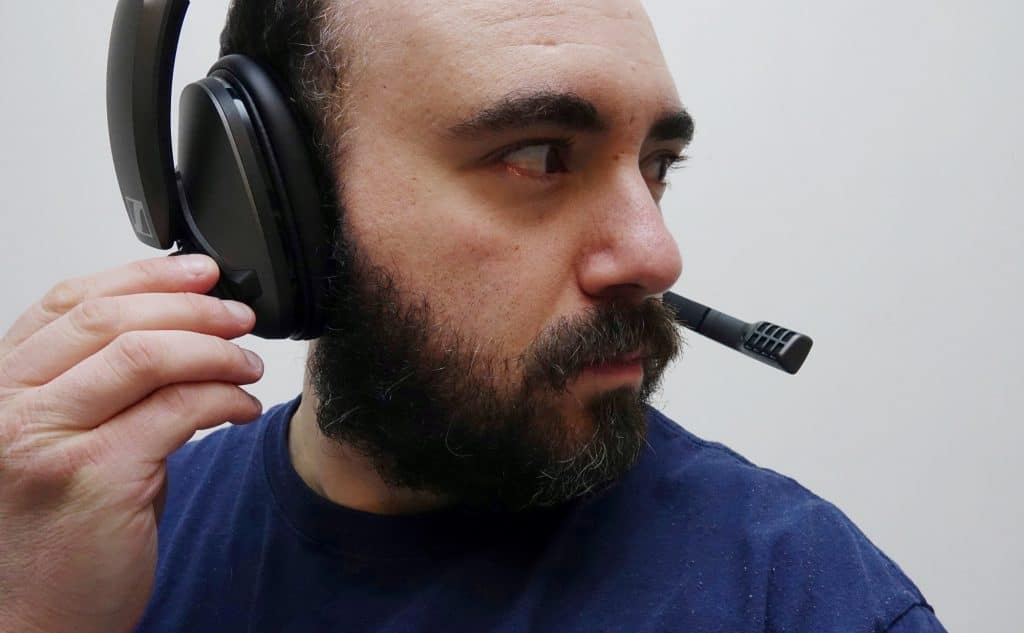 As far as computer headphones go, the Sennheiser GSP 370 certainly work quite well, though they’ll work better on one style of computer over another.

From a technical standpoint, the Sennheiser GSP 370 work properly on both Windows and Mac, and you’ll even get the volume controller jog wheel triggering the macOS volume notches when it’s in use with a Mac.

However Windows PCs clearly get the better end of the deal here, with Sennheiser making a small software suite for computers that only works on Windows. No Mac support here for the software, which is a genuine shame.

We suspect that’s come about because Sennheiser markets the GSP 370 as gaming headphones, and more gaming happens on Windows computers than Macs. That said, gaming can still happen on a Mac, so we’re surprised to see this massive discrepancy between the two operating systems. Even more confusing was the fact that the Windows software appeared to increase the volume and not just the sense of dimensionality, meaning Mac missed out.

In many ways, it can seem like you’re paying for the battery life, which is quite impressive. Credit where credit is due, a rating of up to a one hundred hours is remarkable no matter where you stand, though there is a slight catch: these won’t talk to your phone.

We’re a little surprised to see the Sennheiser GSP 370 require its own wireless USB plug to work, because it means they don’t have a connection to work on phones or tablets. Simply put, these headphones are focused solely on computers, and unlike other brands that can jump around from PC to phone, the GSP 370 seem to lack that approach.

And aside for the lack of noise cancellation, volume controls, and support for a more standard Bluetooth connection technology, all of which would be nice, we have a bit of a warning: turn the GSP370 headphones off when you’re not using them.

It’s probably a no brainer, but if you leave them powered on and they begin to run out of battery life, they’ll start randomly beeping. If they’re not on your head, this random beeping will just play in your room, and will make you think they’re coming from some other device, because when do headphones beep?

These do, however; the Sennheiser GSP370 will beep when they’re running out of battery life, which means if they’re sitting somewhere in your room, you’ll look frantically for a device you own that starts beeping at you.

Hopefully this won’t happen to you, though, and to ensure it doesn’t, switch off your GSP 370 after a day’s work. If all goes well, you won’t have to plug it in to recharge for quite a few more days. 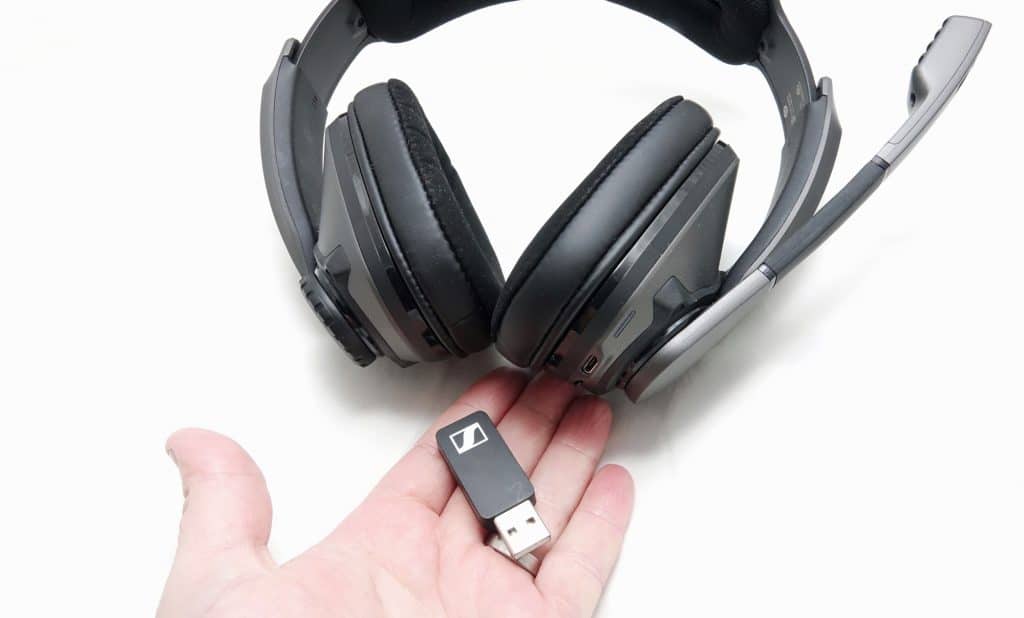 Despite the occasional flaw and the fact that these make us look rather geeky, we liked the Sennheiser GSP 370 more than we expected. Granted, they lack the looks that we’ve come to expect out of Sennheiser, and are less like the sleek gamer style modern gaming machines go about delivering. Plus the lack of support for our phones and tablets is a little frustrating.

The Sennheiser GSP 370 are not headphones that will drive mobile devices in your life. That’s a genuine shame, as Sennheiser could have delivered a pair that did double duty.

But they still also might, particularly if you’re a gamer: Sennheiser’s GSP range focuses on gamers to a degree, not just because of that Windows-focused software suite, but with support for the PlayStation 4, as well. That makes the Sennheiser GSP 370 suitable for work and play, which in these times where we’re working from home and playing from the same place really quite approachable.

Granted, they’re a little more expensive than you might typically place a headset, and more or less destined to stay home altogether. But if what you crave is great wireless sound with plenty of volume and battery life to boot, the Sennheiser GSP 370 wireless headphones are worth checking out. 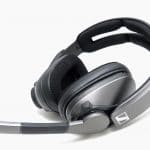 Sennheiser GSP 370
Design
Features
Performance
Ease of use
Battery
Value
The good
Comfortable over-ear design you can wear for hours
Big boom mic
Plenty of sound
Volume control is tactile and friendly
Comes with the wireless connector
Compatible with Mac, Windows PC, and PlayStation 4
The not-so-good
No Bluetooth compatibility, and requires the USB plug to work
Won't work with your phone or tablet, only your computer and potentially your games console
No noise cancellation
No music controls on the headset
Software suite doesn't work on Mac
Not remarkably good looking
Expensive
4