Wish you had a way of backing up that was as fast as the computer you’re using? The Samsung T7 SSD nails it, as you’ll find in our review.

Backing up data is vitally important, and you only need to learn that lesson once to find out what we mean. Lose files and you can’t get them back, making backups incredibly important.

There are plenty of ways to backup, be it online storage using cloud solutions from Google, Dropbox, and the like, or external storage. Most people don’t burn files to DVDs anymore, instead relying on an external storage solution, either a hard drive or a solid-state drive. Hard drives tend to be more cost effective, while solid state drives are typically faster.

That last category is an area Samsung has been working in for quite some time, and in its latest external drive, the company has made something slimmer, speedy, and more secure than we’ve previously seen.

That’s the Samsung T7 SSD in a nutshell. Is it worth your time?

What is the Samsung T7 SSD? 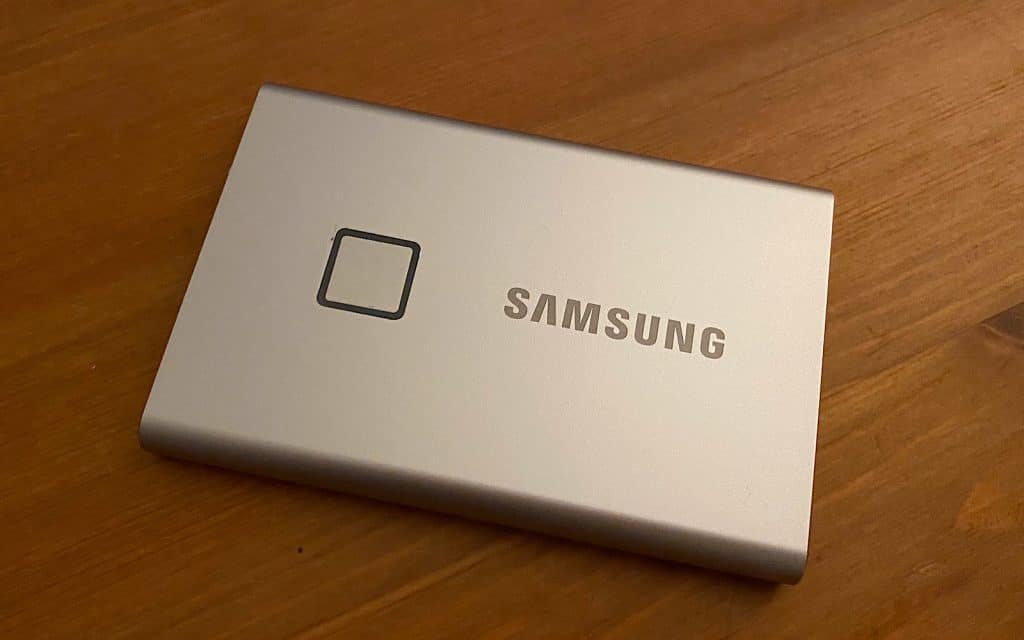 There’s a bit of an initialism here, but if you’ve bought a computer in the past few years, it’s likely one you’ve seen: SSD.

It’s a term that means “solid-state drive”, and essentially means there’s a stick of memory on the inside of the aluminium casing that makes up Samsung’s T7 external SSD. That makes it very similar to the SSD that can likely be found on the inside of your computer, since laptops with older hard disk drives (HDD) with moving parts are much rarer these days.

You’ll know solid-state storage in other ways, too. It’s the storage found on the inside of your phone, and is very similar to the memory cards you’ve used in your camera before. It’s storage on a chip without the movie parts, and it’s something Samsung has become very, very good at in recent years, so much that its technology can be found in both drives and sticks, depending on how you plan to use technology.

In the T7 SSD, it’s Samsung using some of its solid-state storage in an external way, providing the technology in a small aluminium case not much bigger than a credit or debit card, and about five times as thick as one.

The T7 barely weighs anything at 58 grams, and you’ll probably find the USB Type C cable it relies on is just as heavy if not heavier than the drive itself.

To put it simply, the Samsung T7 SSD is a fairly thin and light metal box that can house your data. It’s even a little thinner than the last model, the T5, though it’s also a little lengthier.

Aside for housing your data, the Samsung T7 SSD looks to get you access to that data quickly. That’s one of the major features of a solid-state drive to begin with, and the T7 keeps things snappy with support for up to 1000 MB per second.

There’s also a fingerprint sensor on the top, a new feature for Samsung, while the drive works on the USB Type C port so many of our phones, tablets, computers, headphones, speakers, and cameras are including these days. 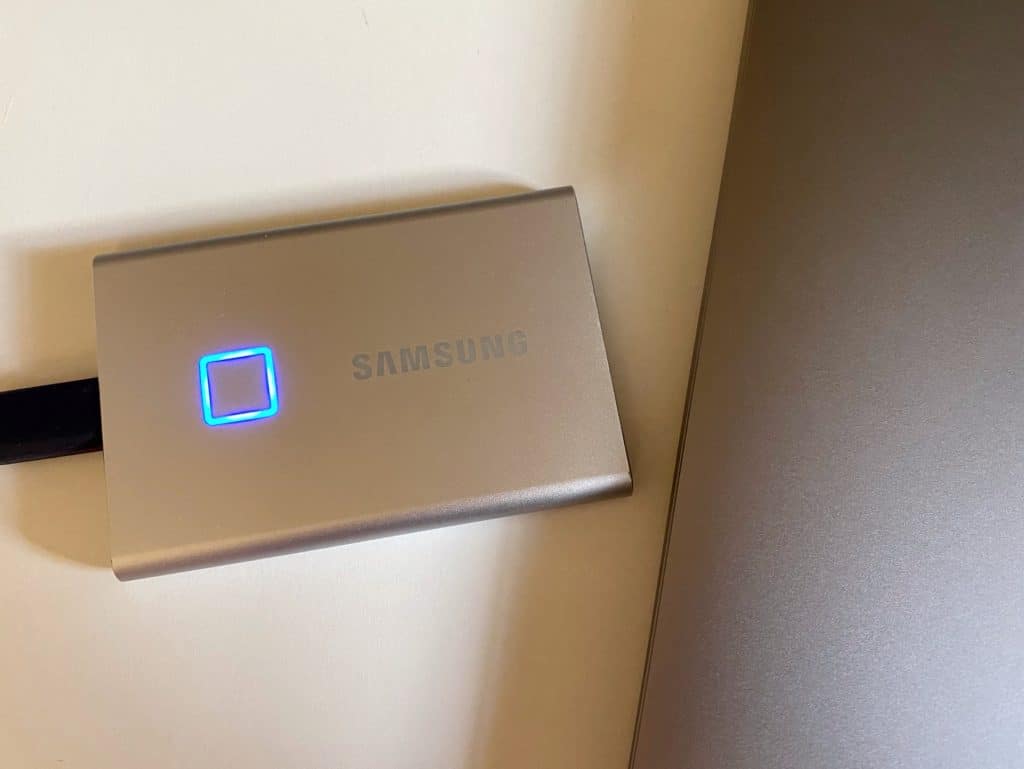 Arriving in either 500GB, 1TB, or 2TB, the Samsung T7 SSD is a cute little way to keep your data backed up in an external capacity, and offers the speed not every drive can lay claim to.

Time is money, and the longer we have to wait for a hard drive to do its thing and write files, that’s potentially time we could have had doing something else. Anything else.

These days, files are getting bigger, and if you have a lot of photos or videos, or even just large files of any nature, backing up can be a problem. The cloud may be a viable backup solution for big files if you have enough bandwidth in your broadband, but we’d argue both local and online backups make for more data security.

So while you should probably back up those files to Dropbox and Google Drive and the like, an external solution sitting right next to you is also a strong idea in today’s world.

Samsung’s T7 SSD is one of the many you can find, but it’s different in what it offers from a physical security standpoint and that of speed, namely that it offers something for both.

The speed grabs us most, because this is one fast external drive.

While the older T5 SSD topped out at around 500MB per second, Samsung quotes double that in its specs. We couldn’t hit that in our tests, but found 900MB per second was possible on read, and a little under for write speed. That’s close to double the speed of the T5, and enough to make us impressed.

To put it into perspective, that’s a gigabyte in a second, and several in just a few. Crazy.

In the physical security department, there’s a fingerprint sensor that you can use to lock down the drive, much like you would your phone. It’s a curious inclusion, and one that works across any operating system once setup, though the setup works best on Windows.

What does Samsung’s T7 SSD need?

There’s no surprise that Samsung would choose to use a fingerprint sensor for security in the T7, and Samsung has a pretty solid track record in building fingerprint sensors in other devices, such as phones and tablets.

What Samsung is less great in is software for devices not running Android, and the T7 SSD is continued proof of that.

In fact, good luck getting its T7 software to run on the latest version of macOS, Catalina. While you need to run that software to set up that fingerprint sensor, the app crashes out every time, and even the new version of the app from Samsung’s support site didn’t appear to recognise the drive in our testing.

It means that if you have a Mac, you probably won’t gain fingerprint access on the T7 SSD, at least for the moment. Your computer may still be able to be locked down with a fingerprint sensor, but that’ll likely come from your Mac, not the Samsung drive, and it doesn’t solve your dilemma of locking down your Mac’s data on an external drive with your fingerprint. We’d love for Samsung to release a new version of the software that fixes this, though, and make this entire section go away, because outside of the software’s problems, there’s practically nothing else wrong with the drive.

In fact, you can even use a Windows machine to set up the security if you need to, and then just use any other computer without needing the software installed, unlocking the drive simply by plugging it in and holding that finger on the sensor. Samsung’s software will need to delete your fingerprints in order to get updates, a weird catch in the way updates roll out, but you can also use it without the fingerprint security entirely, and just as a fast drive altogether. 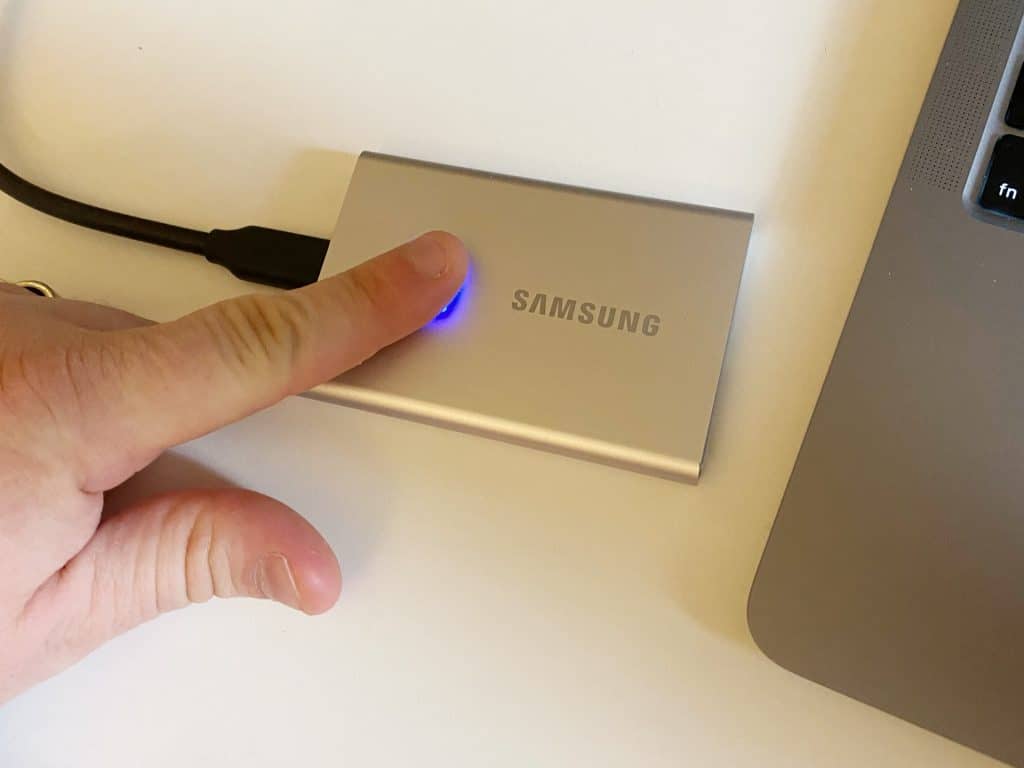 As to whether the Samsung T7 SSD is worth your money, that comes down to what you value in a backup drive.

Those prices, however better than the original recommended retail value from Samsung, are still more expensive than external conventional hard drives which edge closer to 1TB for under a hundred, or 2TB for just a little over. That said, you can’t simply compare a conventional hard disk drives (HDD) against their solid-state drive (SSD) cousins. Hard drives have moving parts and are typically slower to transfer files to, making for a huge difference.

In the SSD world, the price of Samsung’s T7 SSD isn’t dramatically different from much of what’s out there, though the performance is consistently solid, which helps cement that value.

Essentially, if you’re looking for fast backups in a pint-sized form, the Samsung T7 SSD delivers. If you need more space for your data and don’t mind it being a little bigger in physical size or a little slower, a conventional external hard drive is a better bet.

Frankly, we like the pint-size speed of Samsung’s T7 SSD, and provided you look around for a better price than it’s RRP, you’ll be likely be happier, too. 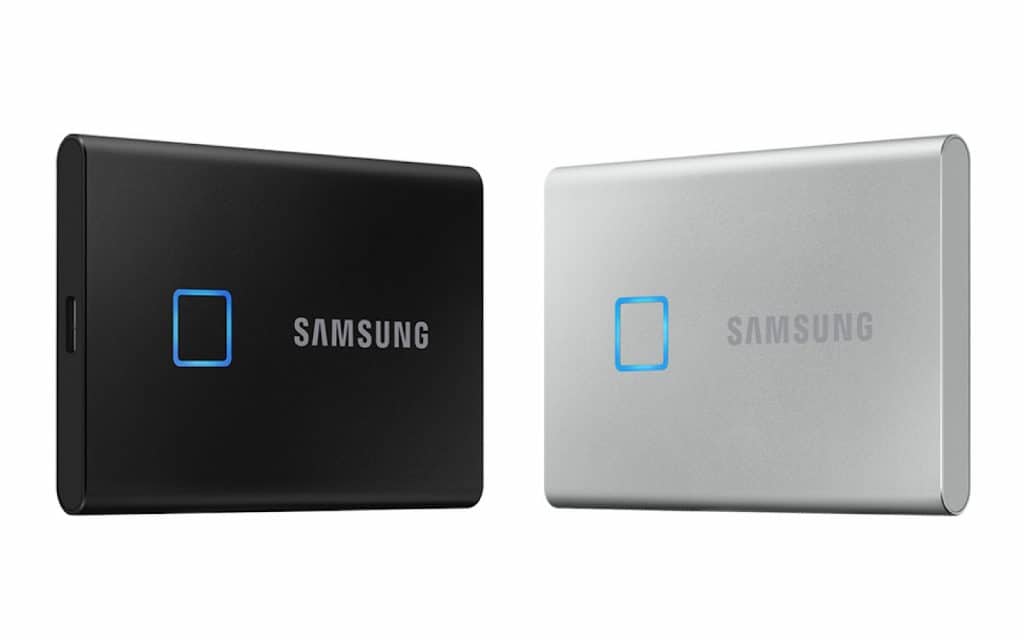 As far as solid-state storage goes, Samsung has held an edge for quite some time. Whether you know its technology from your phone or even your computer, it’s an area the company has made tremendous strides in.

With the T7 SSD, that work continues, and the result speaks for itself. The Samsung T7 SSD is slim, slender, speedy and strong. It’s the sort of stuff you want with you, and keeps a fast and tiny backup counterpart near you when you need it. Highly recommended. 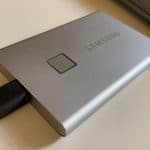