You don’t have to look far to see how far the watch has changed, but it’s not just because of the technology, but also shape. In Samsung’s latest Galaxy Watch3, the circle is back, and that makes it a cinch to use.

The next generation of Samsung’s approach to smartwatches may look a little familiar to the older ones, especially if you’ve ever eyed either the Galaxy Watch or Samsung Gear watches over the years. That’s a range Samsung has long been finessing, and while the Gear S2 first popped up in 2015 with a circular bezel that made the Samsung smartwatches look and feel more like a proper old-school wristwatch, it’s an idea that the company still pushes and delivers on.

And we are A-OK with that.

While the Galaxy Active does away with the physical rotational bezel that acts as a controller for the watch, the standard Galaxy keeps that controller totally in mind, providing not just a touchscreen, but also what is basically a circular directional pad to ease through the menus quickly. It was in the Gear S3, the Galaxy Watch, and now Samsung is skipping over a Galaxy 2 and jumping right into the Galaxy 3, where the idea sticks around once more. 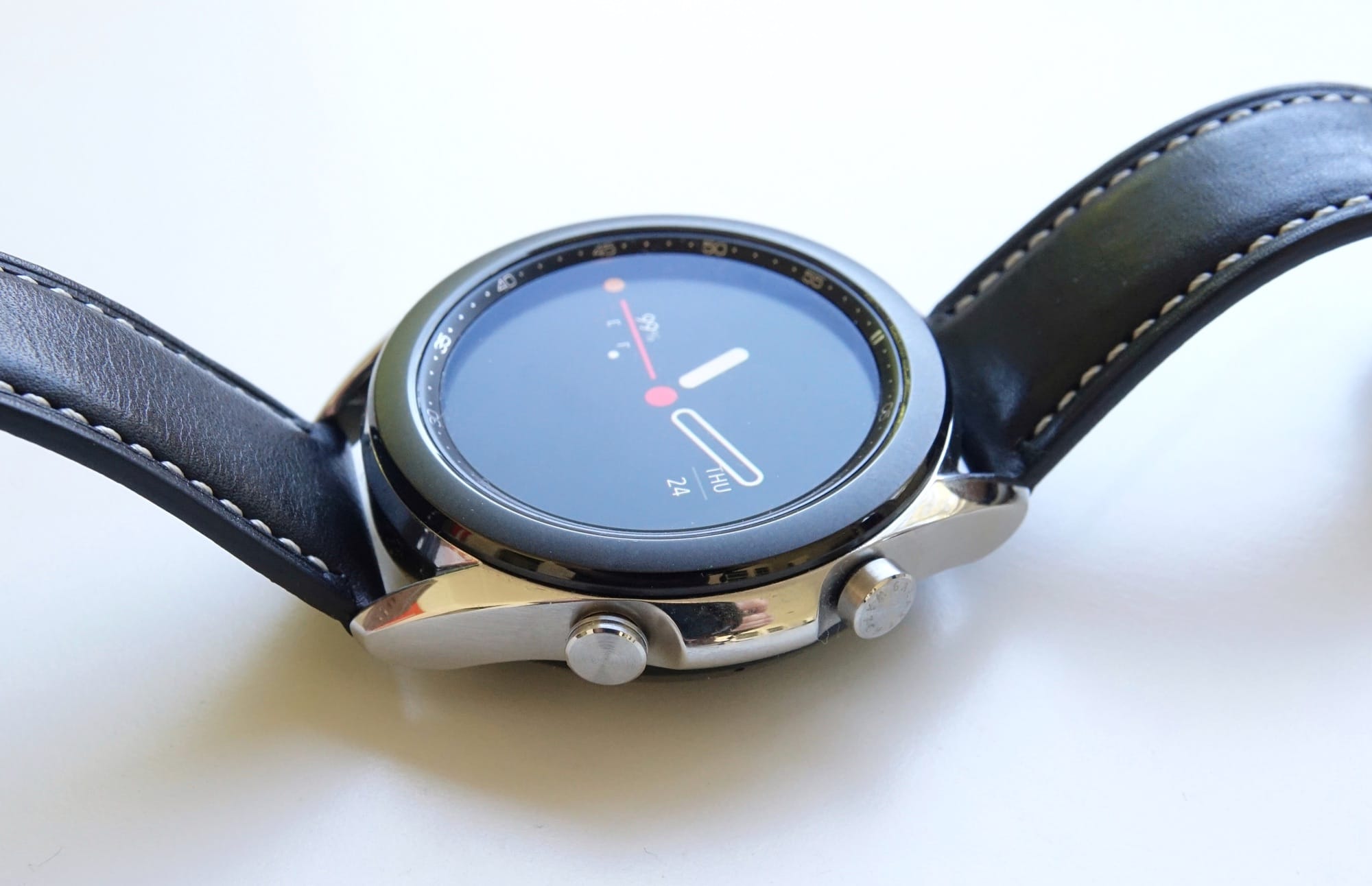 In the Galaxy3, the change is more on size and refinements, making two variations of the circular smartwatch, a smaller 41mm and the larger 45mm. The differences relate to size and battery, and we’ve been checking out the smaller model, the 41mm, which uses a 1.2 inch circular screen running a 360×360 AMOLED screen, protected by Corning’s Gorilla Glass DX, a version of the Corning scratch-resistant glass.

While the screen is a little smaller than the 1.4 inch screen used in the 45mm Galaxy Watch3, most of what’s under the hood is the same.

There’s a Samsung-made Exynos 9110 dual-core chip, 1GB RAM, 8GB storage, and support for WiFi and Bluetooth, alongside GPS, Near-Field Communication (NFC) for mobile payments on Samsung Pay, and you might find 4G LTE depending on the model you buy, too.

The watch is water resistant at IP68, and includes quite a few sensors, including an accelerometer, heart rate sensor, support for bloody oxygen (SpO2), barometer, and a electrocardiograph (ECG), though the latter of which won’t work locally, as no ECG is supported on a wearable in Australia at this time.

Samsung’s operating system Tizen runs on the Galaxy Watch3, something that has been the case since Samsung first launched its watches, and this sits above a 247mAh battery.

You’ll find regular watch straps work with the Galaxy Watch3, with the 41mm needing a 20mm watch strap if you plan on changing them over.

Switch on the Watch 3, and you can typically get straight into using the wearable, with the company honing what is still one of our favourite types of smartwatch interfaces, because it has so much in common with a standard watch and clock.

If you’ve ever worn a real circular analogue watch — and if you’ve grown up in the past decade or two, it is entirely possible that you might not have — the circle has been an unmistakable part of what makes a watch. Beyond a very small number of analogue watches that used unusual designs like triangles — Hamilton Ventura, we’re looking at you — most watches that looked like a clock offered a circular design, because clocks are typically circles. This is a look Samsung has long believed in for its watches, and ever since that Gear S2 redefined its approach to watches in 2015, and it’s sticking with it in the Galaxy Watch3. It even uses it in the solely touchscreen equivalent with the Galaxy Active series.

Specifically, it means you get a circular bezel around the screen that acts as a sort of directional pad for left and right, which also harks back to phones that offered the rotary control in design. It’s pretty easy to work out — rotate it either way to see the on-screen direction change — but there’s also a touchscreen for you to use, which is where most of the selections happen, plus two buttons to trigger things.

And really, it’s a solid approach to controlling a watch, not just because it’s easy to understand, but because it relates to the idea of using a real clock.

You’ll need to pair it with a phone to make the Galaxy Watch3 work, but the good news is Samsung doesn’t limit you to a specific phone type or operating system, and Android owners of any kind can use it, as can owners of an iPhone. Nice. 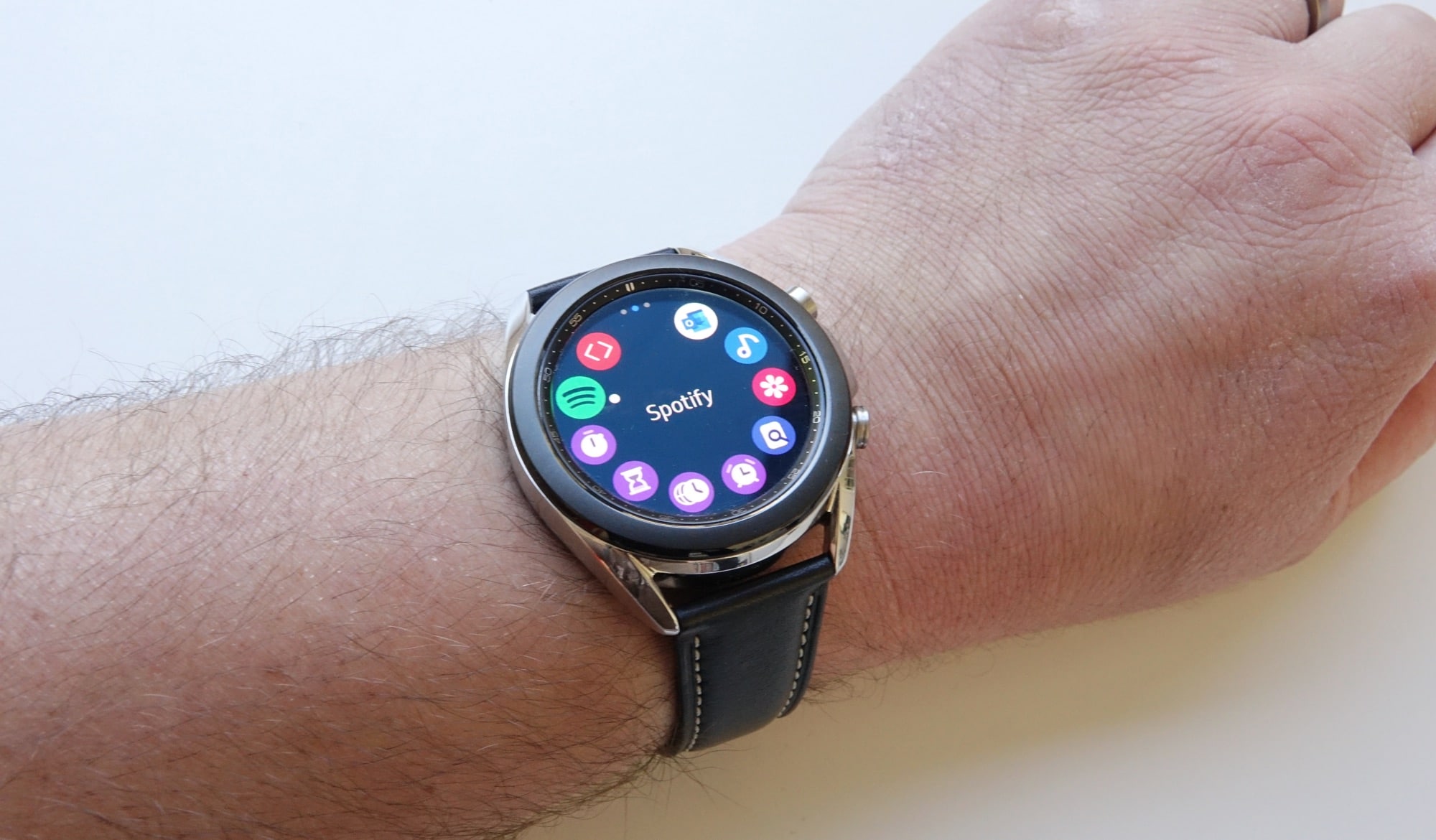 Under the hood, Samsung’s combination of hardware delivers a pretty solid performance that you’re unlikely to see bugs or issues with.

In short, the Samsung Exynos processor chugs along nicely, revealing little to no lag. You can run the odd app on here, and it will take notifications from your phone, plus track your health, sleeping patterns, and even take a heart rate or two, while also fielding phone calls on your wrists, and do so without skipping a beat.

Locally, the ECG technology is lost in action, thanks in part to no electrocardiogram wearable being approved in Australia, so we can’t speak to the quality of that, but there is a reasonable amount of technology included, complete with support for blood oxygen, a technology Apple, Fitbit, and Withings have all recently opted for, as well.

Battery life and smartwatches don’t always fit together nicely, or not as nicely as watches without the smarts, though, because while the performance is top notch, the battery life might draw a question mark.

We’ve seen the Samsung Galaxy Watch previously hit close to a full week of battery life, so we know just how strong it can be, but in this new smaller model, the 41mm kind of sits at two days maximum, with a charge the night of the second day. That makes it more of a 36 to 40 hour smartwatch, which is acceptable and all normal, but not the potential amazing battery life of its bigger sibling.

Essentially, if you want stronger battery life, you might be well advised to check out the 45mm model, because while we haven’t, the same hardware atop a 340mAh battery is likely to yield at least a day longer in life.

One area that might get called into question is the price, because at a starting price of $649 locally, the 41mm Galaxy Watch3 is not a cheap wearable, not by a long shot.

Granted, the Watch3 isn’t supposed to be a cheap or inexpensive wearable. It is Samsung’s flagship smartwatch, and is marketed as that, arriving in a stainless steel body, making it a more premium smartwatch, especially when the aluminium models of at least one other competitor are the lesser priced models.

But $649 still isn’t terribly cheap, and when you factor in that what’s usable in Australia still hasn’t changed dramatically compared to the Galaxy Watch released at the end of 2018 (which we reviewed at the beginning of 2019), it makes you wonder whether it would be easier to find that model, which can be found for around half the price of the new model. About the only major change beyond the size is the support of blood oxygen and the lack of an ECG, and as we continually note, that last one doesn’t yet work here. 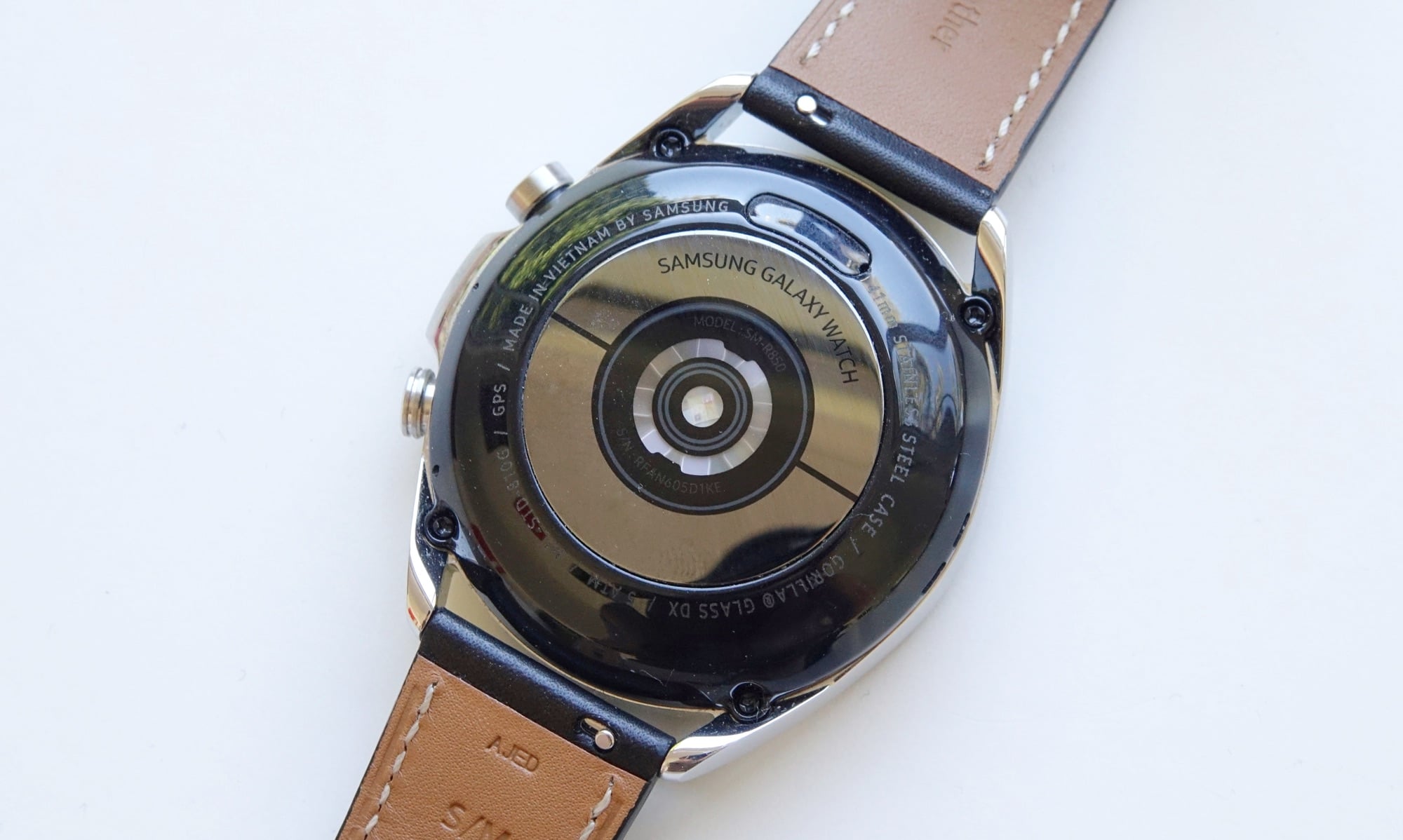 Clearly, the ECG is an issue that Samsung and the Therapeautic Goods Administration need to sort out, though that’s not solely limited to Samsung, but what else needs fixing?

Beyond the price, there’s not a lot.

In the Galaxy Watch 3, the changes are mostly a choice in size — 41mm and 45mm — and the addition of a health feature, albeit one that can’t be used locally. And in fairness to Samsung, that gradual refinement is a situation not specific to the maker of the Galaxy phones, as other wearable makers are now in the “gradual refinement” stages, too, such as how Apple’s Series 6 added an SpO2 sensor as one of its only major changes between Series 5 in 2019 and Series 6 in 2020.

Gradual refinements are where we are for wearable design, it seems, but there’s one we wish Samsung would really deal with: watch straps. 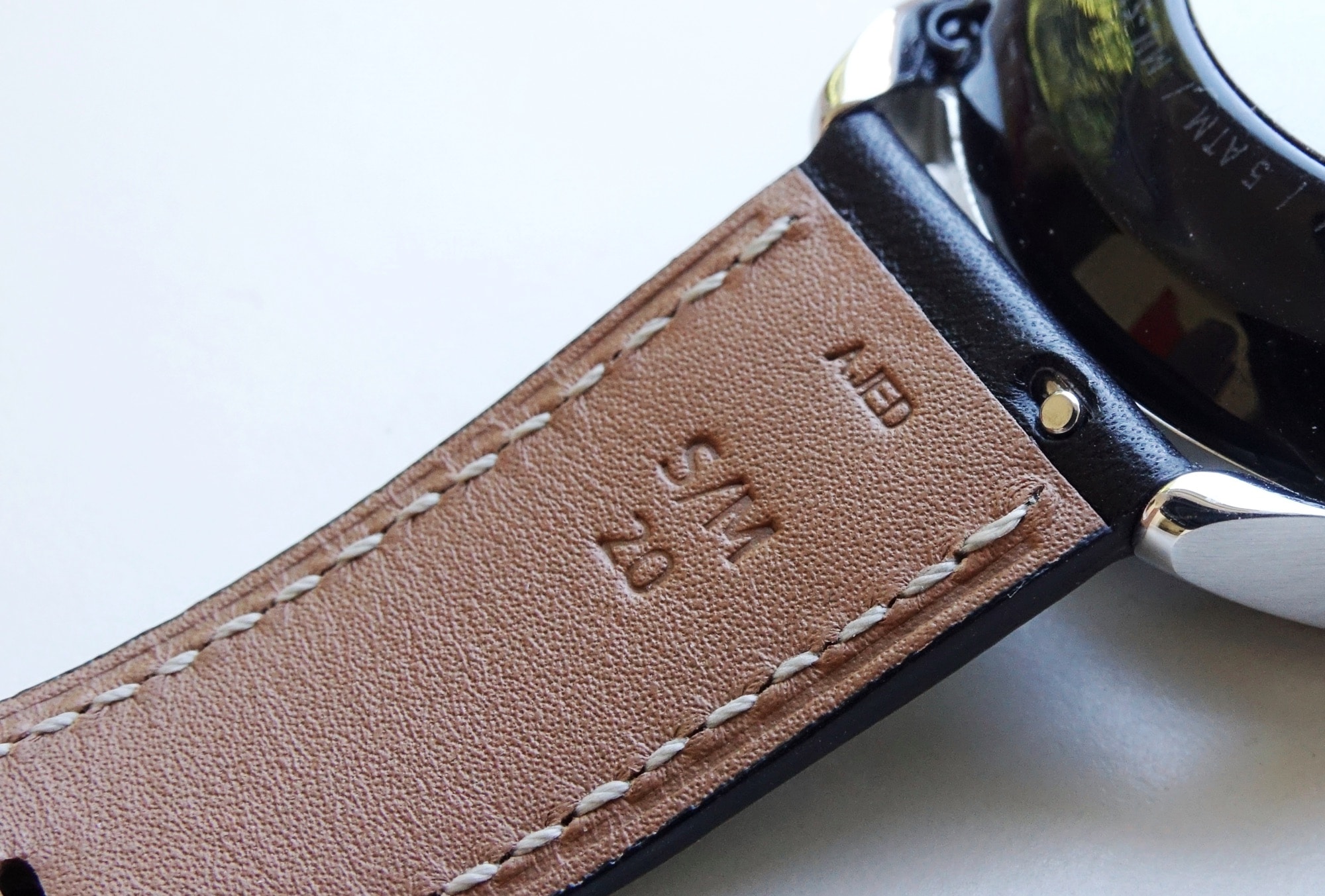 Simply put, while Samsung’s approach to use a standard pin-strap design will be handy for some, it’s still kind of a pain to change, and lacks to simplicity of a custom-designed magnetic switch system, such as the sort Apple uses. Samsung has used a custom approach in the past, but you get the standard pin approach here.

For some, this won’t be bad, and means you can look at Samsung’s straps, but also others made by other brands. And that is a clearly obvious point.

However they’re a pain to change, and mean the Galaxy Watch3 doesn’t have the simply switch out approach for straps that the Apple Watch gets, where you can in the space of mere seconds change it from being a workout watch to something more elegant and classy. It takes more fiddling on the Samsung, and is frankly a pain in the proverbial. 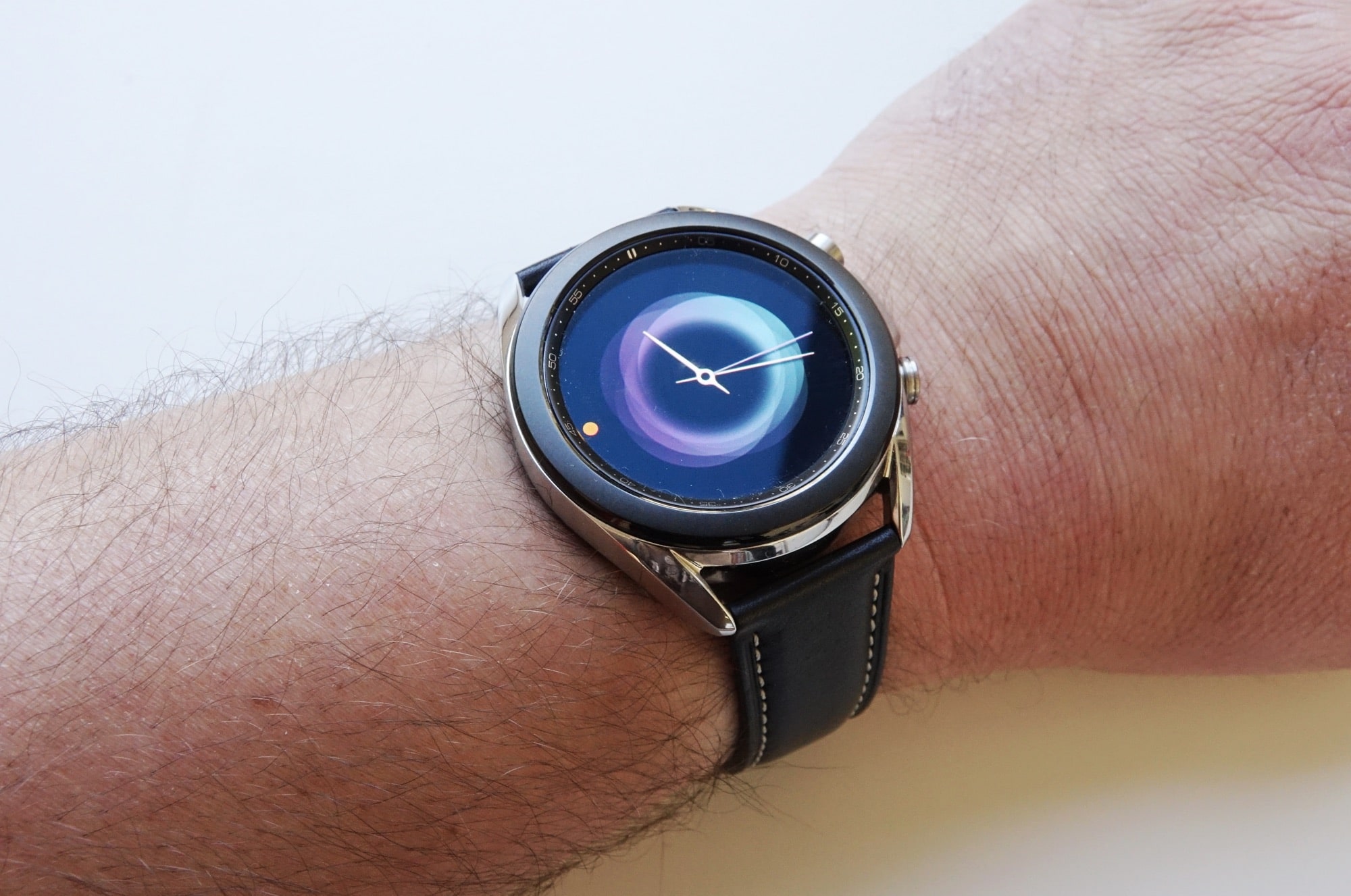 Despite the watch strap issue, the Samsung Galaxy Watch3 is a solid continuation of the Galaxy Watch line, and a great smartwatch to boot.

Samsung has focused on what makes a watch important and delivered here. The Galaxy Watch3 is a great watch that makes sense, without needing to reinvent the wheel. It’s an idea that still works, because circles are awesome clocks that make sense on the wrist.

There are still some things we’d love to see a change from, such as improvements to the battery life and a watch band design that was just that more capable. And we’d love it if Samsung and Australia’s Therapeutic Goods Administration really sat down and had a conversation about the ECG in this watch, because whoever gets it going first will potentially have a game changing smartwatch locally.

Right now, the Galaxy Watch3 is one of the best circular smart watches for wrists in Australia that are stuck in the mindset that watches need to come full circle. 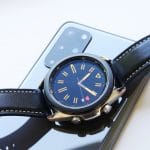 Samsung Galaxy Watch3
Design
Features
Performance
Ease of use
Battery
Value
The good
Looks like a proper watch
Fast to use
Circular rotating bezel feels as good as ever
Good assortment of health features
Decent two days battery life
Works on both iOS and Android
Watch bands use a standard pin system, meaning watch bands are easily to find
The not-so-good
Watch band design isn't quite as easy to change as other smart watch brands (so you can't change it quickly)
Wish it had just a little more battery life
Pricey
4.2