Even though the iPad Pro is fast and capable, it’s not a MacBook Pro. But what if it could feel like one? That’s the premise of the Brydge 11 Pro.

Apple makes a lot of devices, but they’re all a little different. The iMac is not the iMac Pro, and the MacBook is not the MacBook Pro. There are notable differences between them, such as power.

However, you can do work anywhere on either an iPad or a MacBook, even if you don’t have the heft on the former in the latter. So what if you want the two merged or married or combined in a way where they come together?

For that, you need a bridge of some kind, or in the case of a recent gadget, a Brydge of one kind.

The latest Brydge keyboard continues what Brydge has always done well: it turns an iPad into a MacBook Pro. Kinda. Sorta.

There’s more to a MacBook Pro than just the look and feel, but that’s largely where Brydge plays, bridging (get it?) the gap between tablet and laptop with something familiar to Apple users.

In the Brydge Pro, the focus is on the 2018 iPad Pro, and likely the 2019 given Apple probably won’t change the design for a year or two. That’s a design that offers minimalist bezels on the screen and noticeable direct edges on the tablet, which Brydge has built a keyboard to accommodate. 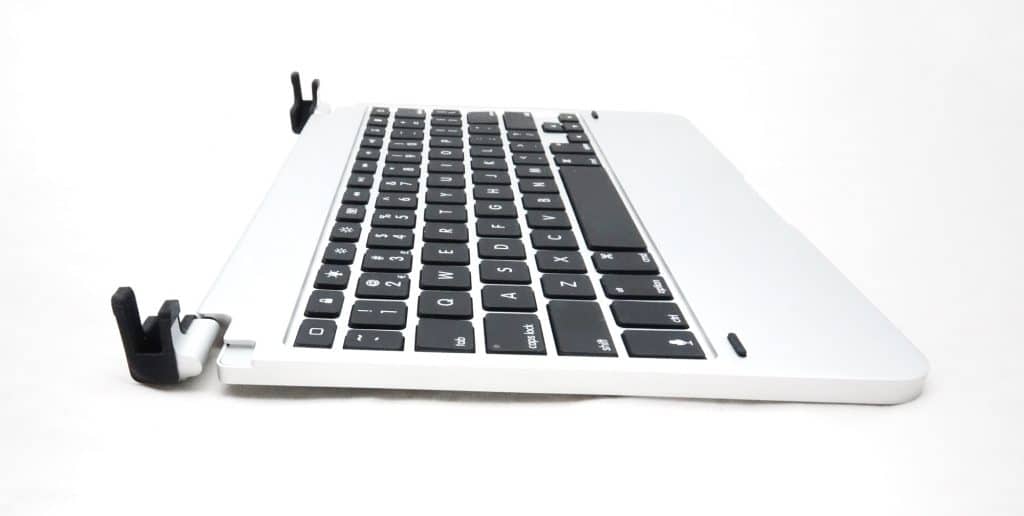 Yes, this is a keyboard for the iPad Pro 11, the 2019 revision of Apple’s iPad with its firm sides and edges, as well as a positively diminished set of bezels. It’s a keyboard made for that tablet, with the Brydge Pro following the same clamshell laptop design of its previous models.

It means you’ll find a pair of rubber-coated clamp-like teeth at the hinge of the Brydge Pro, ready for you to slot your iPad Pro in and hold it there. Tablet into keyboard, the design of the Brydge Pro is an unmistakeable clone for the iPad Pro, delivering that look with a keyboard working over Bluetooth. 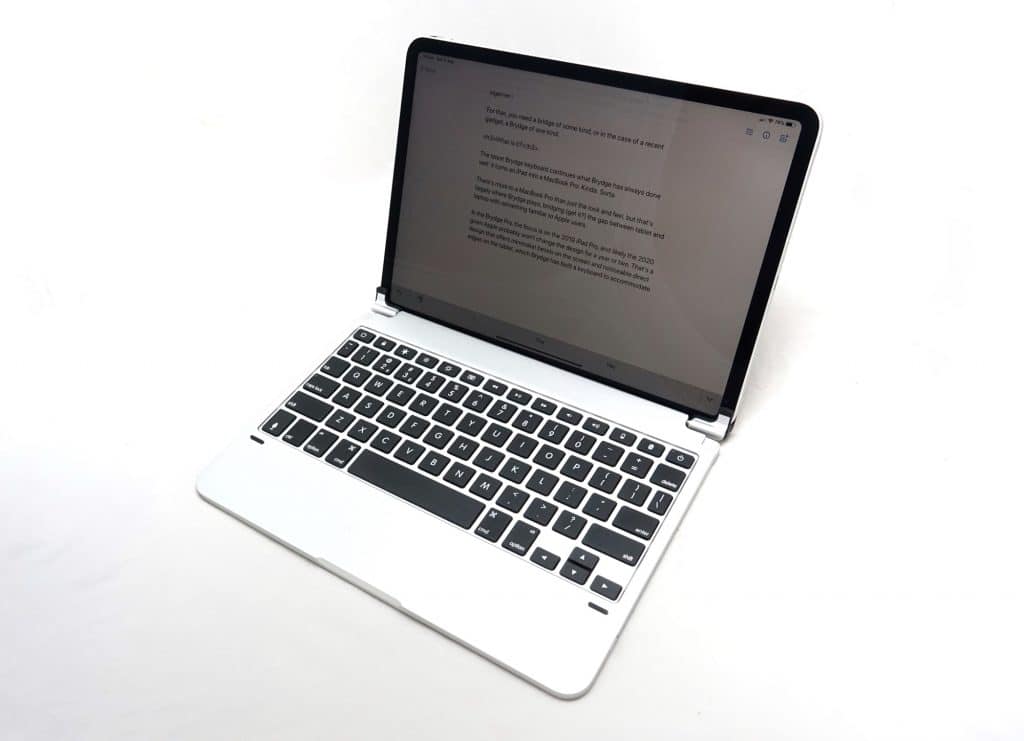 While it lacks the physical keyboard connector the iPad Pro arrives with (and therefore needs its own battery), the Brydge 11 Pro keyboard delivers a more MacBook-like experience for folks who prefer that.

We’re actually big fans of Apple’s fabric-based keyboard, but it’s not for everyone. If you actually prefer the chiclet-style island keys of an older MacBook Pro, this is more or less what you get in the Brydge Pro, albeit on an 11 inch scale.

It’s large and features individual keys, and while the keyboard is very similar to what you might get on an older pre-butterfly MacBook Pro, it’s not quite the same. This is Brydge’s take, which isn’t bad at all. 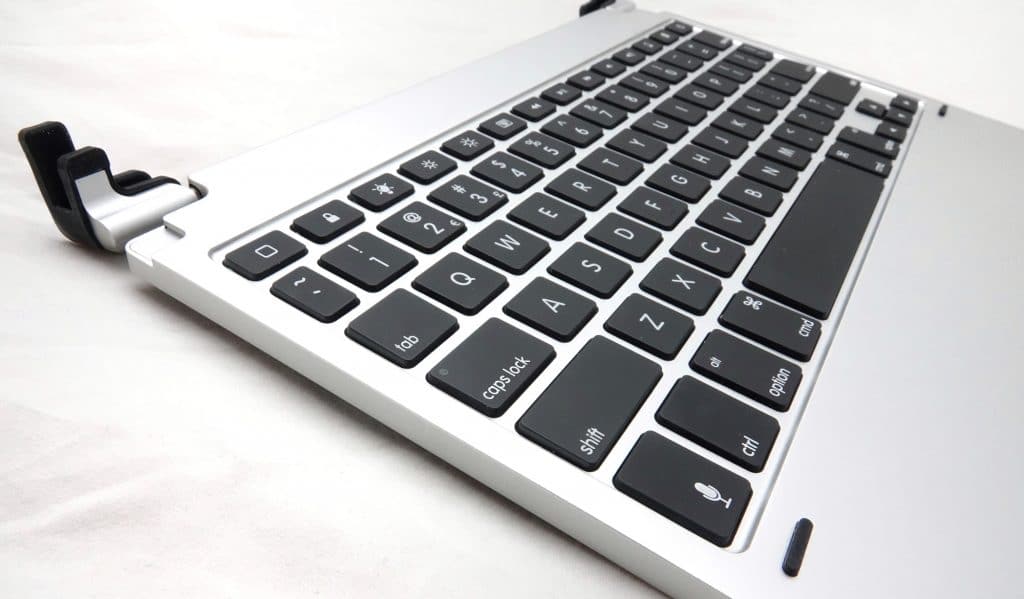 You get three levels of backlighting on the keys, as well, in case you miss that on other keyboards, and there are media controls built into the top where the function keys would normally sit. The keyboard’s design as a whole is very close to what you might call a traditional keyboard, though keys like Tab and Delete on the left side and the backslash on the right are much shorter than a proper keyboard

Brydge packs all of this into a decent title aluminium block charged by USB Type C (just like the iPad Pro) and connecting over Bluetooth, skipping over Apple’s Smart Cover connector now located on the back of the iPad. Almost seemingly because of this, the company bundles in a pleather magnetic backing plate for the iPad Pro, providing some semblance of protection or both the iPad and the connector.

There’s even a decent battery life, with about 20 hours of consistent use when the backlit keys are on, or several months of use with a few hours a day of typing. We didn’t need to charge the Brydge 11 Pro beyond the initial charge, but thanks to the inclusion of the same Type C charge port from the iPad Pro, you won’t have any problems charging at all on this MacBook Pro-like keyboard.

The Brydge 11 Pro definitely adds heft, however, that much we can say. If you value an iPad Pro because it bundles so much technology into a fairly thin and light design, the extra thickness and weight being added here may not suit.

The iPad Pro 11 weighs 468 grams by itself, but the Brydge 11 Pro is even heavier, adding 550 grams. Together, they turn the iPad Pro 11 into an almost one kilogram tablet.

To Brydge’s credit, the keyboard case does hold the iPad Pro very tightly, so you can generally alleviate those fears of the tablet falling out as you pick it up, either by holding the tablet or the keyboard base. That’s helpful to know, as the hinge may flex back if you’re in a vehicle that brakes suddenly. At least your iPad Pro will stay in position.

And possibly another tablet, if you use something of a similar size. There aren’t many of those, but if you have something like say Samsung’s Galaxy Tab S4, the Brydge Pro fits the screen, or mostly, anyway. 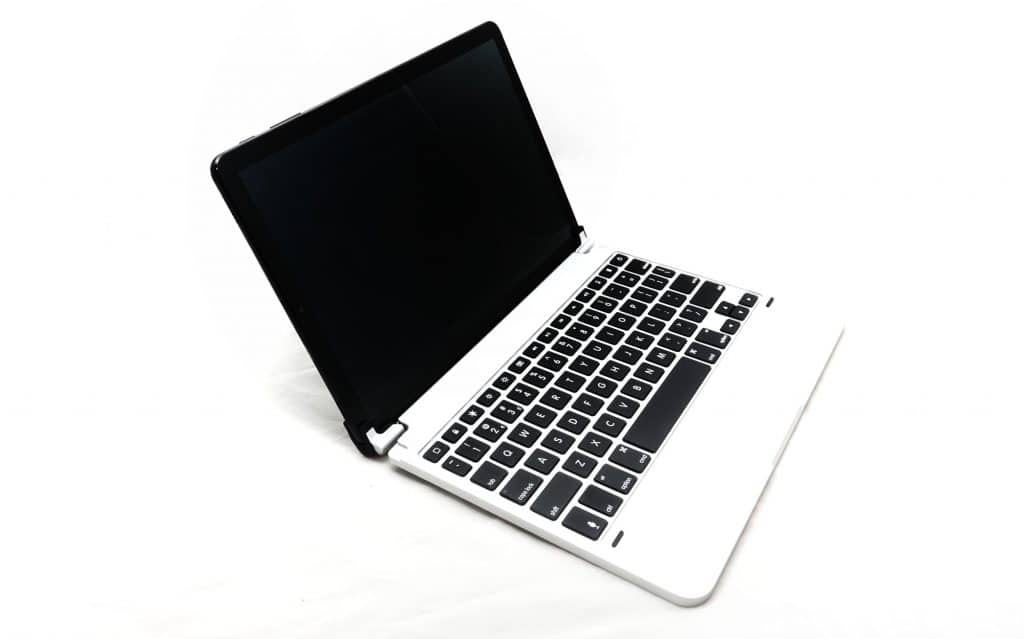 You can fit the Galaxy Tab S4 into the teeth and hinge of the Brydge 11 Pro, and it will hold nicely. The typing experience is even better than what Samsung’s keyboard cover offers, making it a solid choice for typing on the Tab S4, except for one caveat: the size.

The moment you close the Brydge 11 Pro with the Tab S4 inside, you’ll see a difference in sizing. Samsung’s Galaxy Tab S4 falls short of the Brydge Pro’s width, simply because this keyboard case was made for an iPad with an aspect ratio of 4:3 and not a Galaxy Tab’s aspect ratio of 16:10. 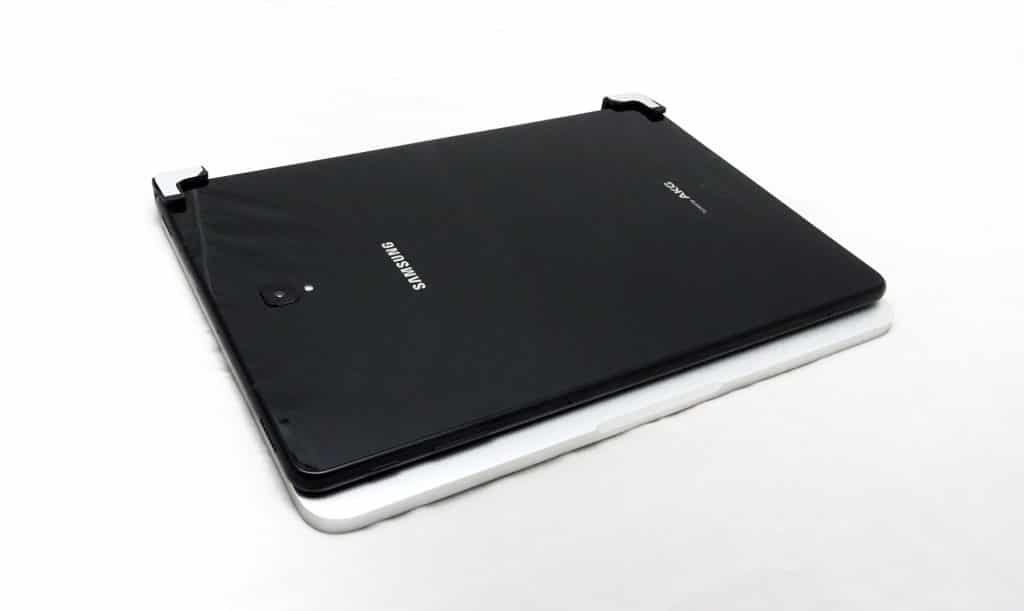 As good as the typing experience is, we want it to be a little better. The keys here offer more travel than we’re used to for a Bluetooth keyboard, and the solid aluminium base exudes quality, but we did have keystrokes go missing in action.

We found the Bridge 11 Pro responds better if you hit the keys really hard, forcing us to adjust our typing approach and striking the keys somewhat aggressively. Giving them any less and you see the keyboard struggles to pick all of them up, increasing the error rate.

That might be because the keys themselves aren’t designed for soft or light typing, or perhaps because we’re too fast over them. However the switch to striking the keys does seem to fix this.

We’d also love if that weight could be reduced some, because it’s impossibly heavy for a tablet. When the keyboard happens to weigh more than the tablet it plugs into, we get a little confused. That’s the case with the Brydge 11 Pro, which is definitely stylish given it adopts a similar thickness (5.9mm on the iPad, 6.7mm on the Brydge 11 Pro), but increases the weight dramatically on the otherwise portable and slender iPad Pro. 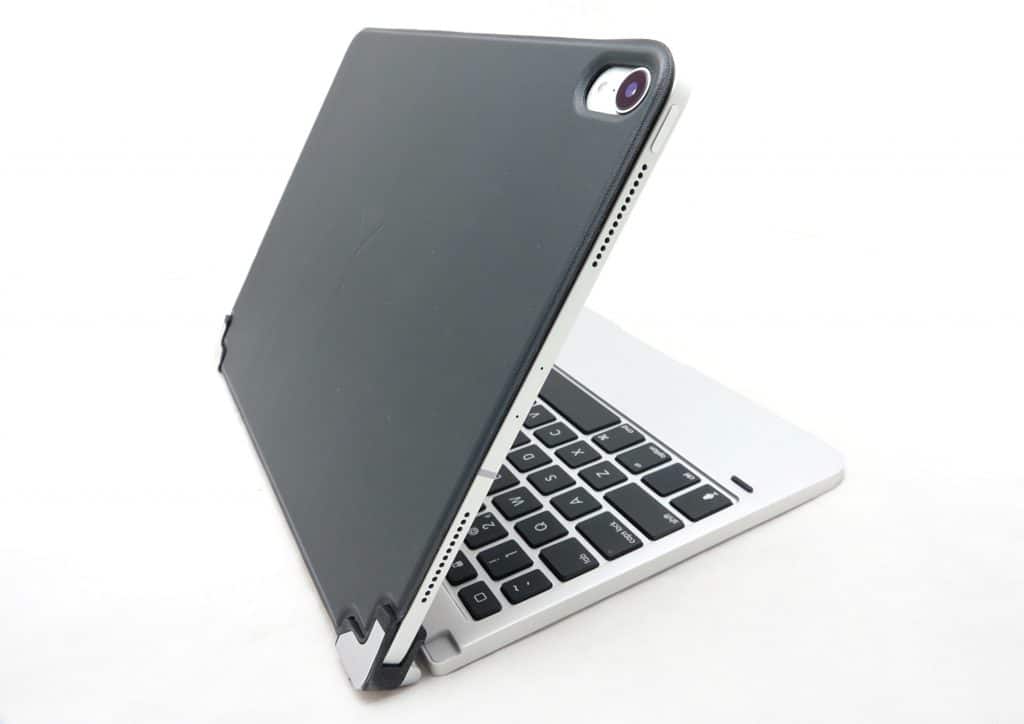 Our other dilemma with the Brydge 11 Pro is that it doesn’t really make use of the iPad Pro’s special feature, the Smart Keyboard connector.

It’s a bit strange to have a keyboard made for the iPad Pro completely omit a feature on the iPad Pro that was made for keyboards as a whole, but that’s where we are.

Back when the Brydge Pro first launched, the company told Pickr that using the Apple connector would have significantly increased the cost, and that people can get the hardware connectivity back by using a Type C cable from the Brydge Pro into the iPad Pro.

And yes, that works, though you’ll want to grab the Type C cable Brydge supplies in the box, because finding a short enough USB Type C cable outside of what’s supplied is a little difficult.

However we still thing incorporating that keyboard connector would have made more sense. Granted, it would have been a different type of hinge because the port is now on the very back of the iPad, but at least you’d know it was using the hardware connection made especially for the iPad Pro. 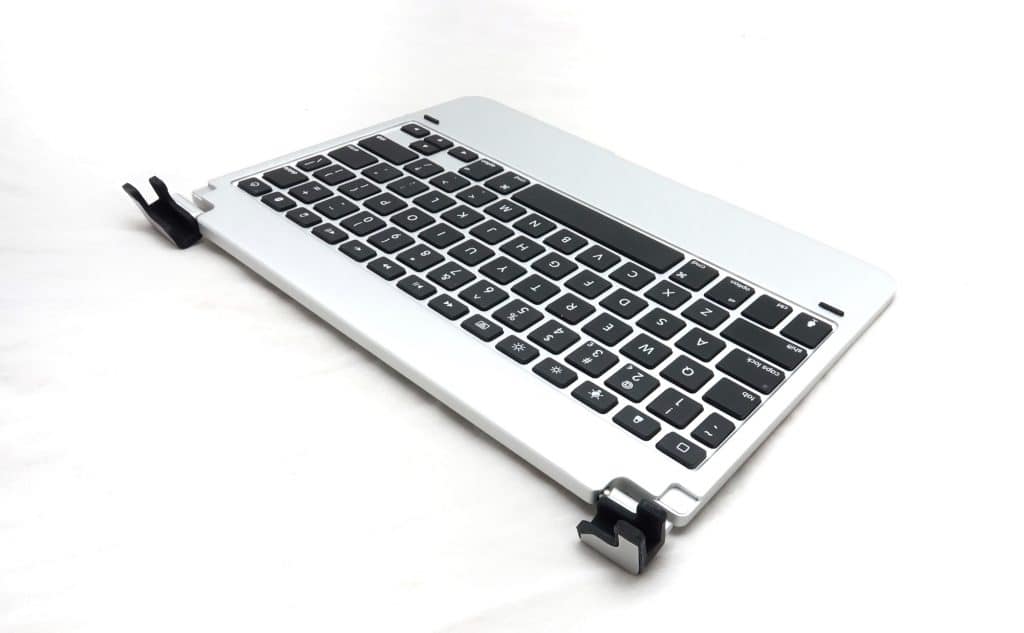 Priced at $229, the Brydge 11 Pro is $40 less expensive than the $269 Apple Smart Keyboard Folio, a keyboard we rely on regularly when carrying the iPad Pro about.

The typing experience between them is interesting. If you don’t like the flexible keyboard produced by Apple, we imagine you’d probably like Brydge’s more, given it’s closer to a traditional keyboard on a laptop.

After using the Apple and Brydge keyboards at length, we think Apple’s is better overall, and supports both hard and light styles of typing, with the error rates diminished considerably. Once you wear in the Brydge Pro keyboard, however, it gets a little easier to use, something worth taking into account.

At the $229 price, we think the Brydge 11 Pro is worth it, but can’t help think it could be a little better. A little lighter, definitely. 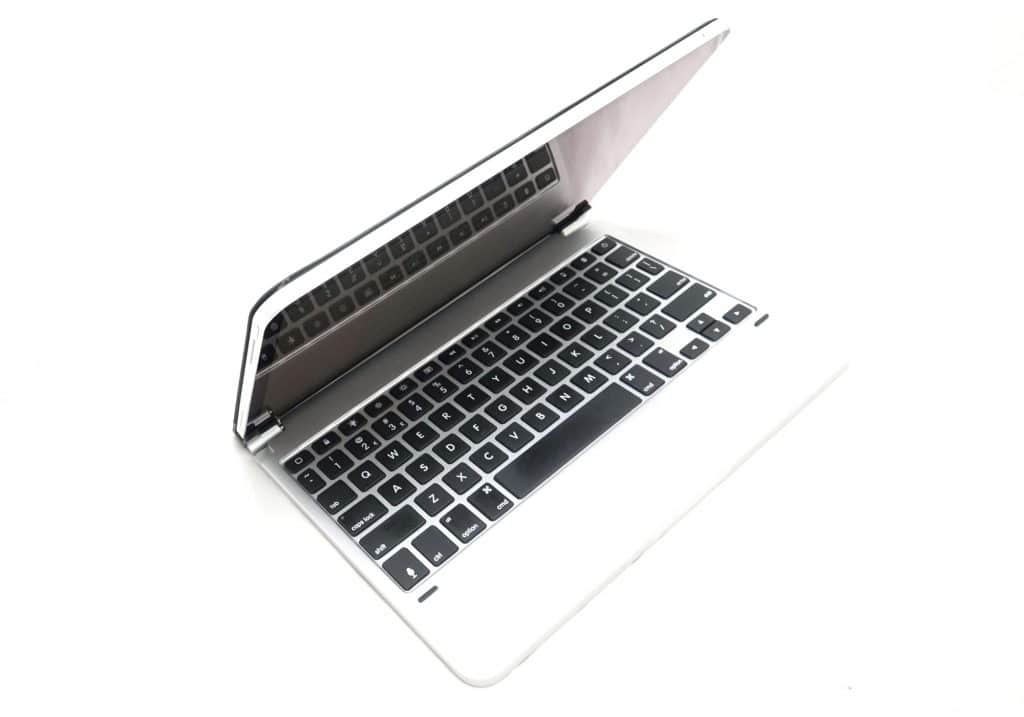 Brydge’s Pro level keyboard for the iPad Pro is definitely something worth checking out, especially if you’re someone who loves your iPad enough to want it to be a fully fledged Mac. Given the changes coming to iPadOS to make the iPad more like a real computer, the conversion from iPad Pro to makeshift MacBook helps to make the Brydge Pro make even more sense.

The result is something that is like a MacBook, even if it’s not quite the same. The look is there, the feel is kind of there, but unfortunately, so too is the heft.

We need to point out that as impressive as an iPad is, it’s not a MacBook Pro. They both do very different things, and while they are both very fast computers and you can get some serious work done on either, plugging an iPad Pro into the Brydge Pro will not turn your iPad into a MacBook Pro. It will only retain the look, the weight, and a keyboard design that is more like an older MacBook than the newer model with the Touch Bar.

But if the feel of a MacBook is what you crave from your iPad Pro experience, you’ll definitely find it in the Brydge 11 Pro. If you have a Tab S4 and are looking for a decent keyboard, this could work, too. 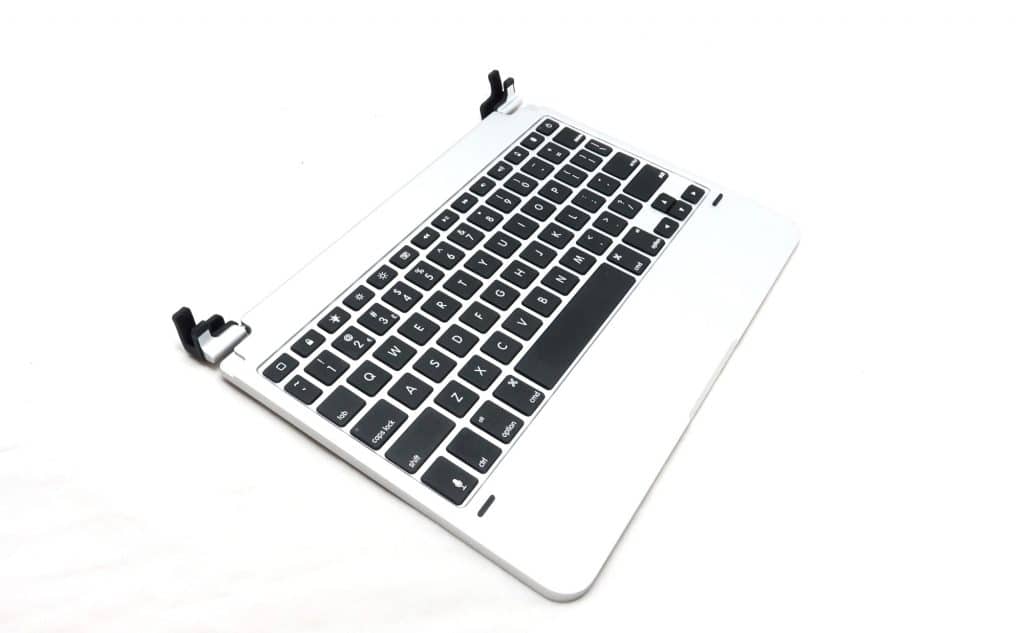 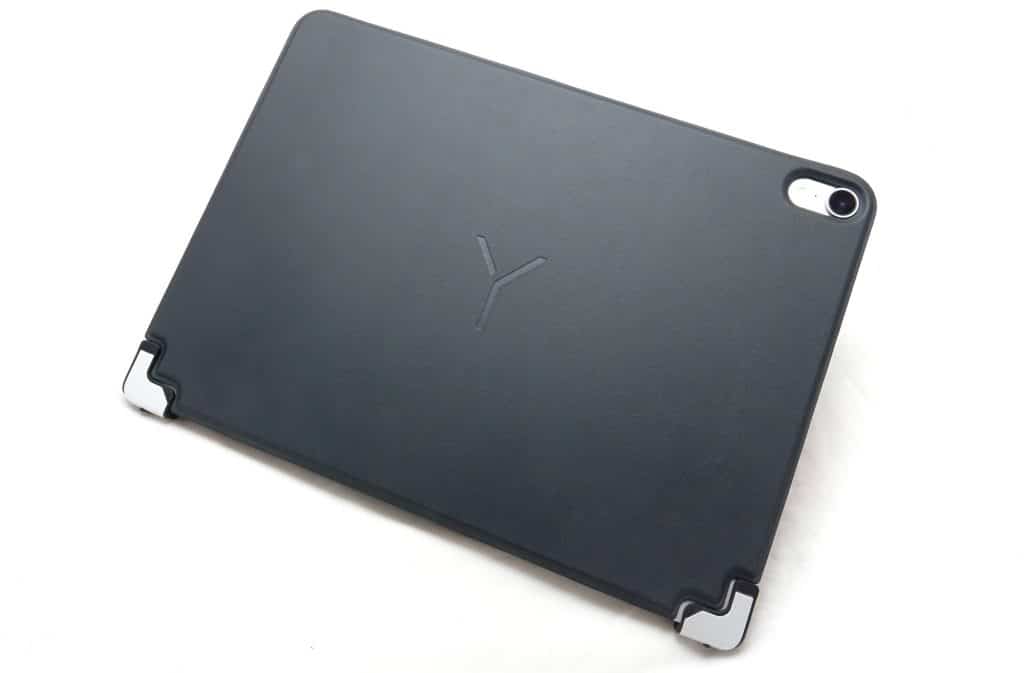 Brydge 11 Pro
Design
Features
Ease of use
Battery
Value
The good
Beautiful build
Makes the iPad Pro look and feel like a MacBook Pro
Works with other 10.5 to 11 inch tablets (ahem, Samsung)
Gives it real heft
The not-so-good
Doesn't use the Apple Smart Keyboard connector
Keys can be a little sticky for fast typists
Gives it real heft... and therefore makes the iPad Pro much heavier
4 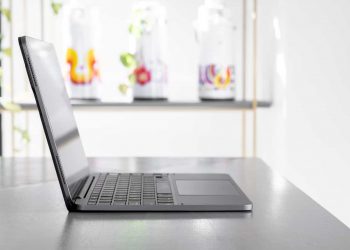 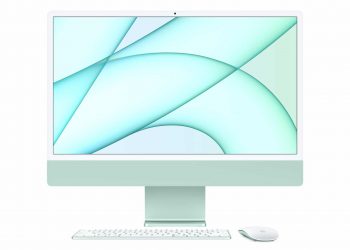 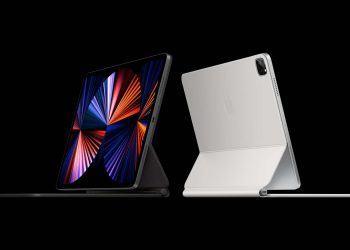