Blood, sweat, and tears: the three things required to produce a historical first person shooter that can both entertain and educates the audience. And Call of Duty: World War II gets close to scoring all of them.

I was a young lad when Call of Duty’s “World at War” was released back in 2008, and I happened to be studying WW2 at school at the time. As my teacher prepared his PowerPoint presentation on the assault of Berlin, a collective sigh was heard, almost in harmony, among the class of 30 school boys who simply didn’t give a damn. We had known for most of our lives that World War II changed the course of history, but we weren’t emotionally connected to the story, and can you blame a group of teenagers?

When I purchased “World at War” — and when I say I purchased, I meant my Dad purchased the game for me (because the MA rating stopped me from buying it myself, more collective sigh) — my perspective of war changed dramatically. The game offered fun-filled action of one of the world’s most grisly events as a form of entertainment, but more importantly became a history lesson for myself and anyone else who played the game.

World at War was remarkable for a different reason, too, and was the first game that I played where not only I cared about the actual gameplay, but also the story and the outcome of an event that happened 60 years prior. Digital or not, it was a title that offered the strength to let me break down the walls normally raised by video game stories, and truly help me to connect.

The COD series from that date was then very close to my heart, up until the devil himself possessed the development and producer teams for Infinite Warfare and Black Ops. You could find die hard COD fans across world crying in the foetal position in the pouring rain as they questioned the relevance of laser cannons, jetpacks, and drones in one of our favourite franchises.

There was a clear turning point in the series’ development, as COD became a shadow of its former self, and it prompted my body to reach for the nearest Vegemite container and proceed to smear it all over the recent campaign storylines, because they were seriously dry.

The last couple of games had me skipping cut scenes and focusing on action, and in retrospect, that clearly defeats the whole purpose of gaming.

When I heard Call of Duty was returning to its roots and producing a WW2 themed game, I was initially worried. There’s no doubt that the game was a direct response to the release and subsequent critical acclaim of EA’s Battlefield One, and no doubt the distaste of previous COD releases.

Is it the best decision to create an entire game in retaliation to your direct competitor for creating a World War game? In this case, the answer is an undeniable and resounding “yes”.

COD WWII sees you as part of what has to be the luckiest group of soldiers in history on the mission to take back Europe from Nazi Germany with the help of the French Resistance and British Intelligence. Playing the game on the Xbox One X, the graphics do not disappoint, forcing you to question whether you’re playing the game or playing a cutscene.

Remember when game cut-scenes were clearly better than the actual game, and you yearned for things to actually mesh? We’re there now, and it’s a visual delight, not just to watch the pores on the faces of your enemies as you crush and stab, but just to watch explosion after explosion of Nazi scum.

Speaking of Nazi scum, the game’s campaign really builds over time, offering missions that are not only diverse, but at times extremely nerve racking.

Take the mission of Rousseau, a French resistance fighter whose parents, husband, and child were murdered by the Nazis. Her reasons for going into espionage will be fairly obvious, but her mission doesn’t involve dual-wielding light machine guns, charging into battle or something— cue Brad Pitt’s accent in Inglorious Bastards — scalping some Nazis. Instead, you’ll go undercover and infiltrate a German army barracks to exchange a briefcase with a fellow spy posing as an officer to blow the gates of the establishment to allow troops to sweep in and rescue Paris. 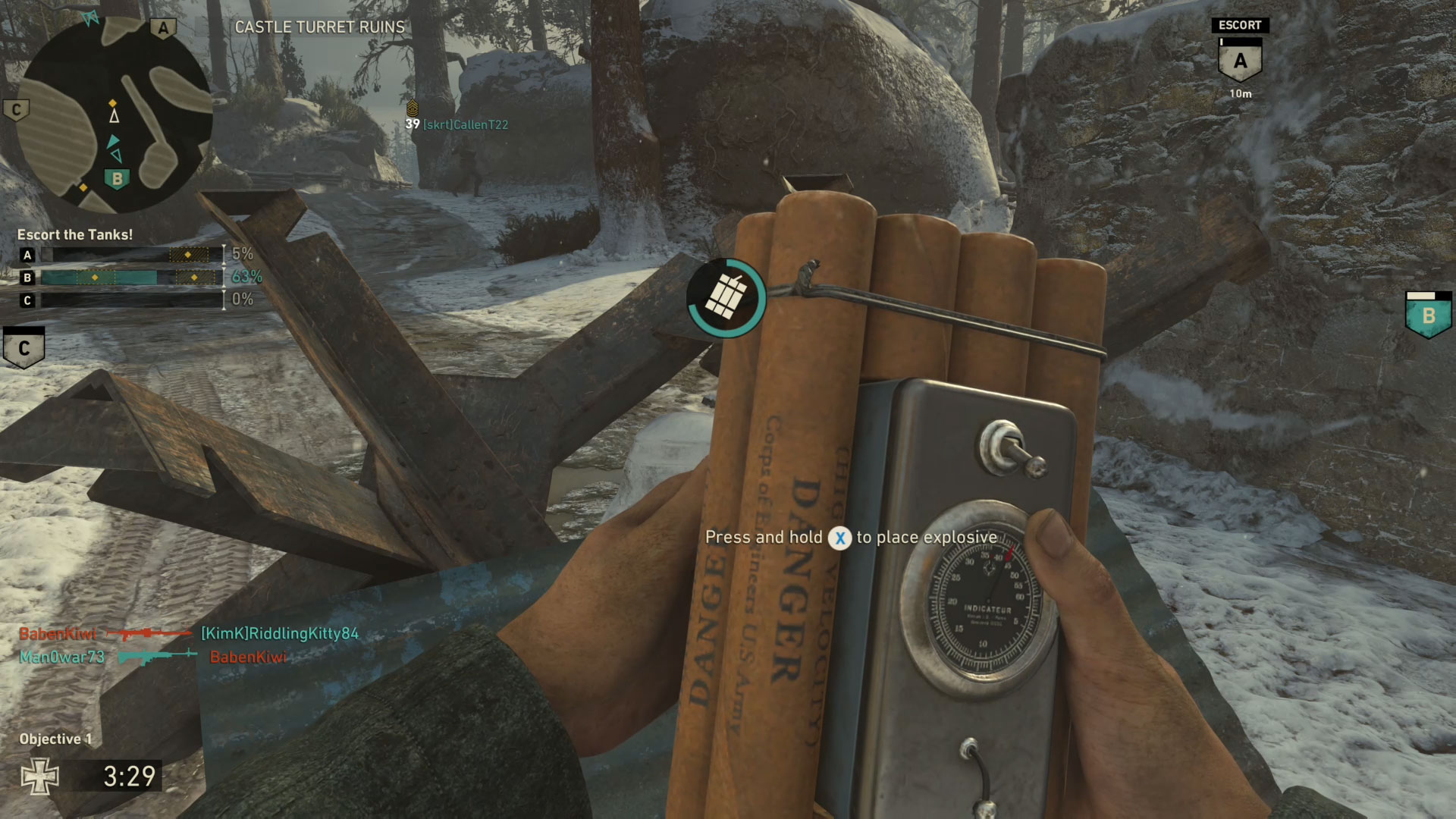 It’s a bit of a mouthful, but one that feels like something from a beautifully constructed movie, less like a run and gun gameplay and more something you can connect with, a mission that is a welcomed return of COD campaign brilliance, like the ones we remember playing that started a COD love affair all those years ago. Surprisingly the best missions in WWII don’t involve firing a weapon but instead using stealth to rescue civilians and avoiding conflict.

At times the campaign is a tad clichéd, historically inaccurate, and blindingly pro-America, I expected to personally sacrifice myself as I ran into waves of German troops wielding the American flag in one hand, a bald eagle resting in the other.

But for the first time in a long time, the a Call of Duty title doesn’t rely on full on action and gore to convey a message or to entertain its players; rather, it involves them in the story, portraying things like a high depth emotionally charged drama that just so happens to give you a digital gun to take part in the narrative.

Josh Duhamel — you know that guy from the movie with the other guy — stars as your squad’s cranky ass sergeant. His character was a tad unbelievable, and it felt like he has been possessed by Grumpy Cat after a few too many bad whiskeys, making sly comments after huge feats of bravery to the dry with of “let’s see what you’re really made of”, which we’re not sure is really ever proven or dry, or even funny.

Fortunately, you don’t have to worry about Duhamel’s acting for too much time, because there are Nazis to kill. You may not be overly impressed by the diversity of weaponry, and it often appeared that no matter what weapon you chose to kill your enemy, it did the same amount of damage, though the single-shot of snipers and the explosive action of bazookas are the exception.

The gameplay has changed slightly, but nothing beyond do a few adventure-esque missions, and then aim, shoot, and throwing a clown car of grenades at waves of enemy troops. 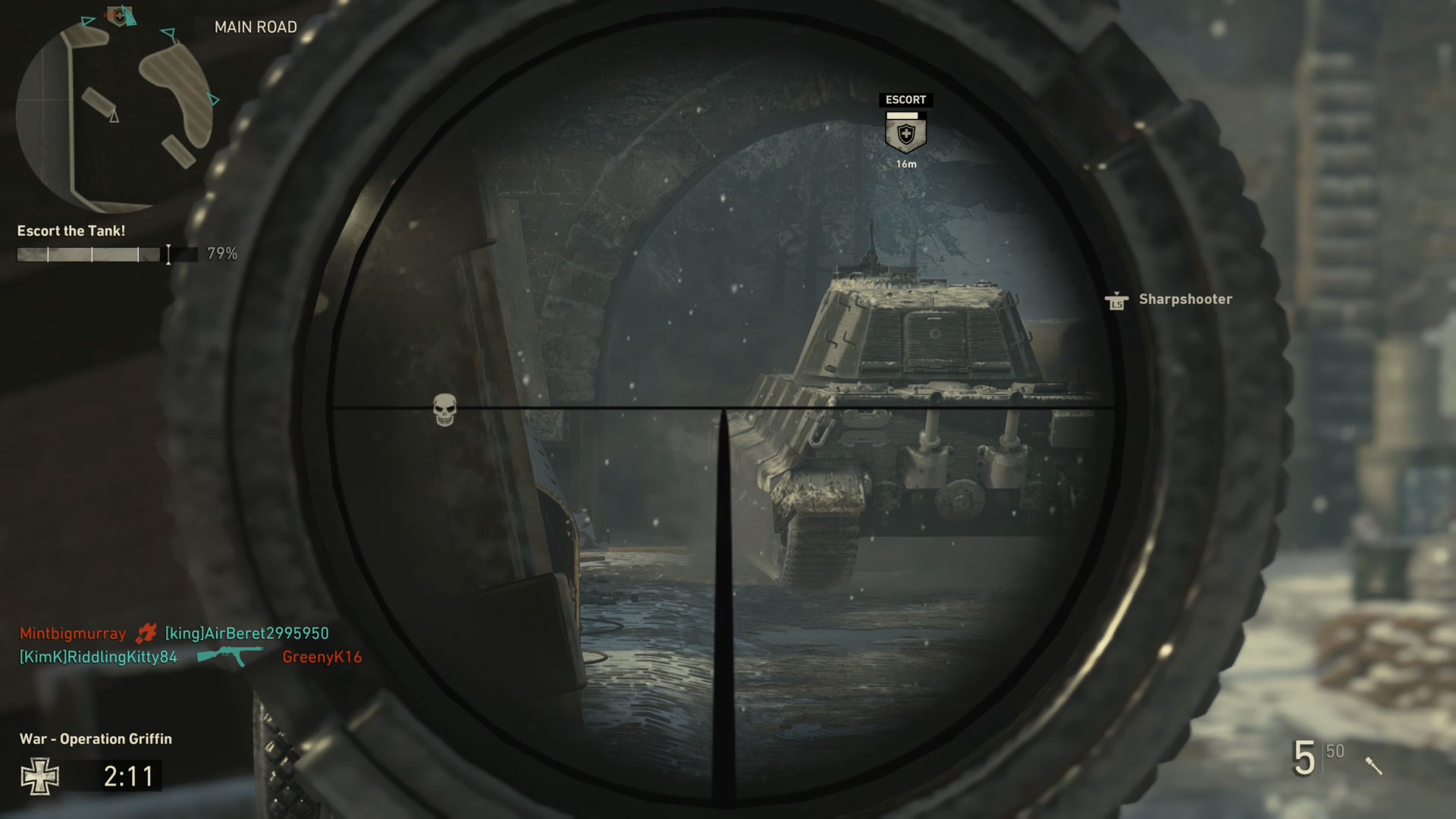 In COD’s vision of WW2, you are given the option of using certain squad member’s special abilities, such as requesting an ammo or health pack, and ordering a mortar strike. At times, you’ll rely on these abilities a little harder than you might normally, but at times it can be more entertaining to hide behind a fallen building and heal before taking out a sniper or flamethrower.

Despite having an experienced Officer and Sergeant on my team, COD WW2 often pushes itself back to typical first-person shooter design, forcing you to do pretty much everything on every mission, which of course is the point of the player being the protagonist, even if it kind of undermines the whole idea of having a squad to begin with.

There are a few moments in the campaign where you act as a bird’s eye for your squad, and these are by far the most exciting moments, affording you the opportunity to thoroughly enjoy slow motion shooting through the head of Nazi scum, or flamethrowers whereby you can create a meaty explosion by firing bullets at their fuel tanks. In fact, the builds over time and you do find yourself caring about your fellow squad member, which only lends itself well to the solid construction of the overall narrative.

A great new addition to the campaign is “Heroic Acts” which sees certain situations being presented to you during a mission where you can choose to rescue a fellow soldier or allow an enemy to surrender. These jump from the regular expectation of run and gun in this style of game, but at points, we found ourselves just going back to the old routine by accident, attempting to save an ally soldier who was trying to fend off an enemy, and accidentally shooting a single bullet through both of them.

We’re pretty sure our character killed an equal amount of Nazis and Allies, but fortunately the game’s generals and commanders aren’t going to penalise you for that (and hopefully you don’t think less of me, you handsome Pickr reader, you). 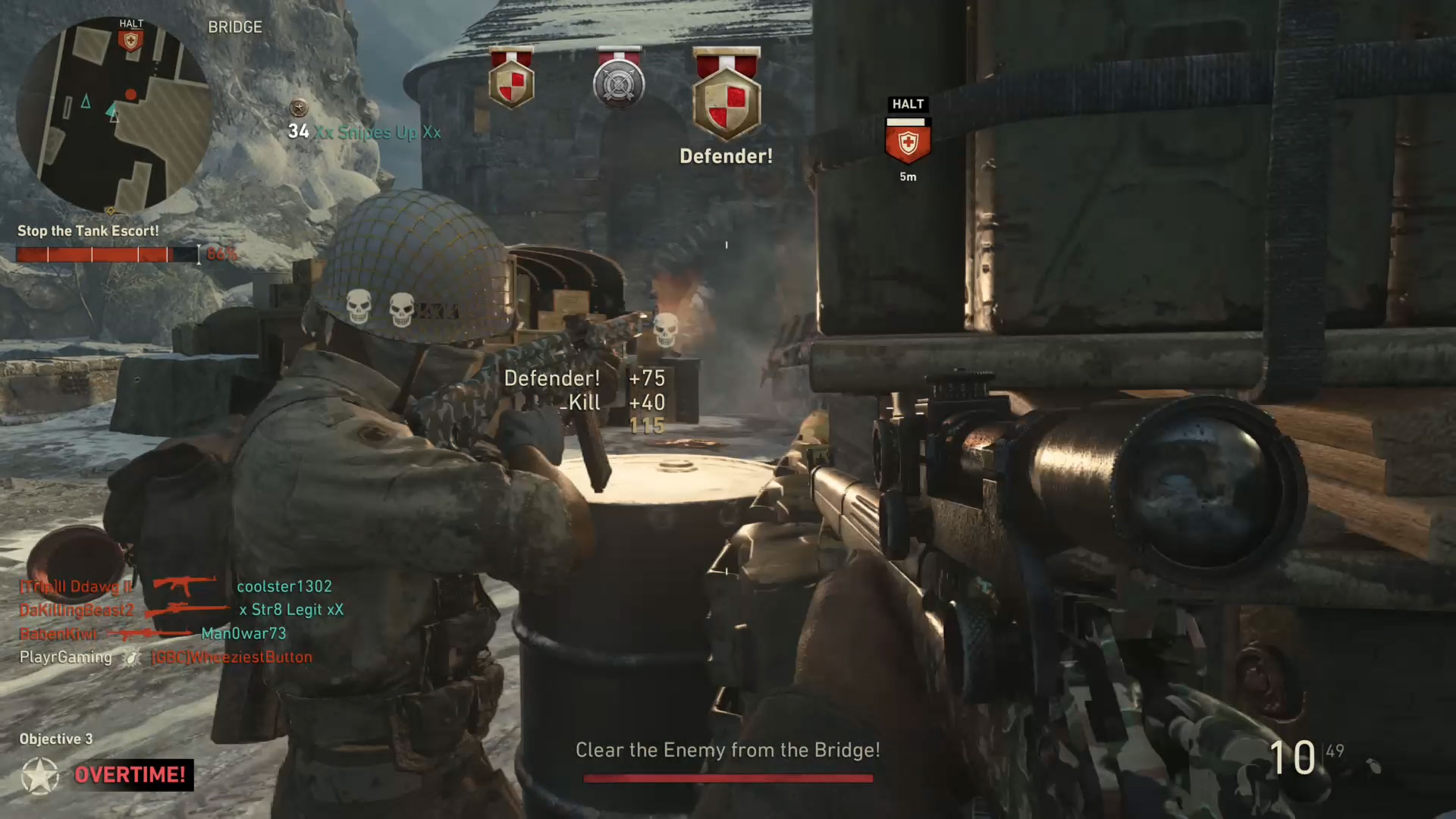 About the only thing that really feels like it hasn’t grown so much is the multiplayer, which we’re sure quite a few players will get into, not just for the tremendous recreation of war being hell, but because COD WW2 is essentially the new definition of a realistic shooter in a tremendously well-populated environment, even if it is playing very closely to EA’s Battlefield release for the year.

Our frustration with the multiplayer portion of the game isn’t so much that it’s bad, but more that it’s stressful, letting you live, run, and go out guns blazing fairly quickly, almost becoming a chore to just complete player versus player recreations of key scenes and missions.

Nazi Zombies on the other hand will have your Fitbit going into meltdown as it tracks each heart attack you have attempting to complete a series of objectives.

Though the mode doesn’t offer much in terms of direction, you and your team mates will eventually band together and start decapitating zombies — Nazi zombies, at that — in excellent fashion. I am yet to complete the story but I’m fairly positive that the producers have hidden a few sneaky Easter eggs that’ll see you happier than a zombie in a fat children store. 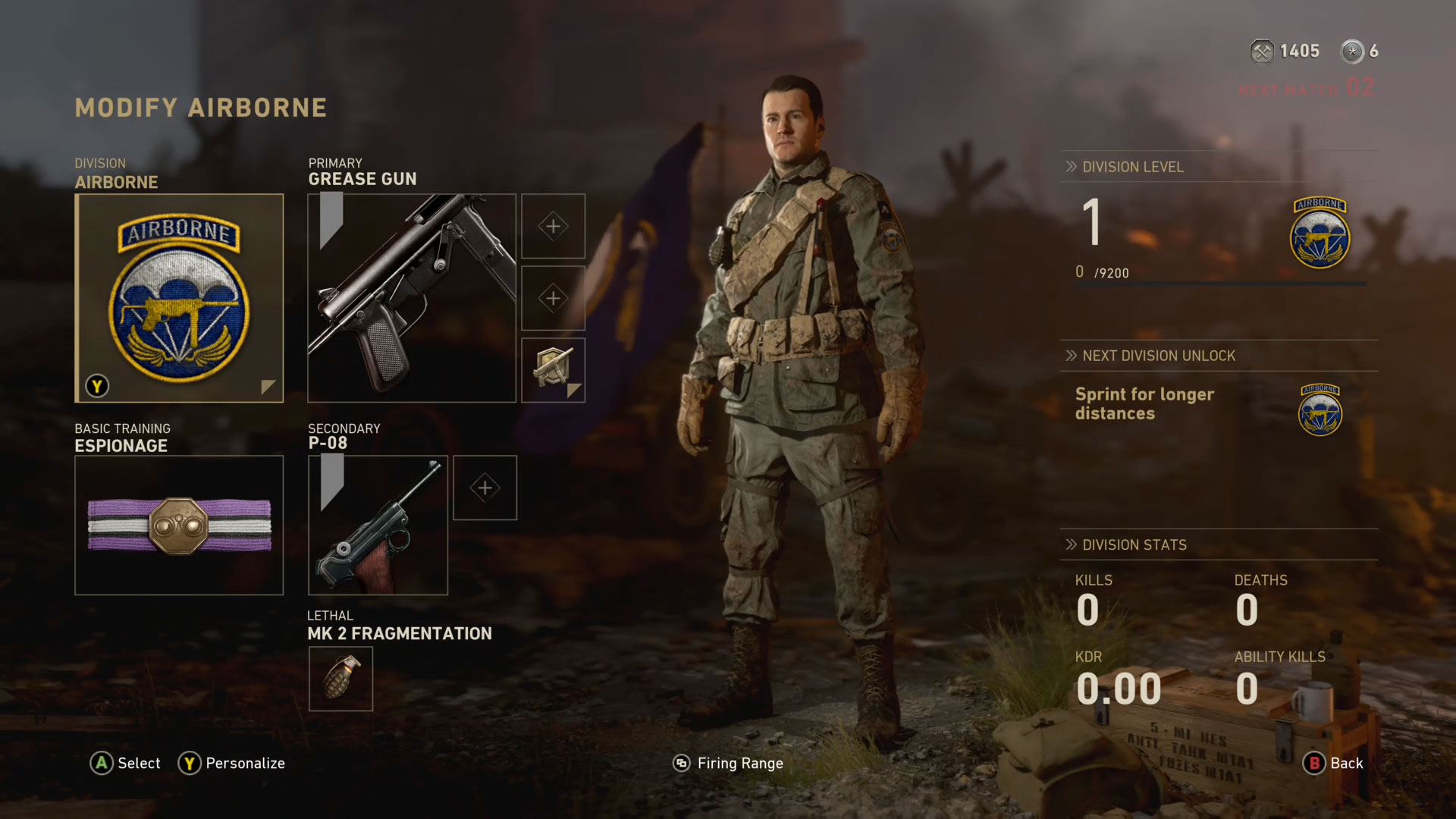 Overall, Call of Duty WWII reminds me of the franchise’s golden days, the ones where I would sprint home from school, sneak into my room and see where the campaign would take me next.

Is WWII one of the best games of 2017? No, but it tells a story that you’ll die (many, many times) to know the ending of. 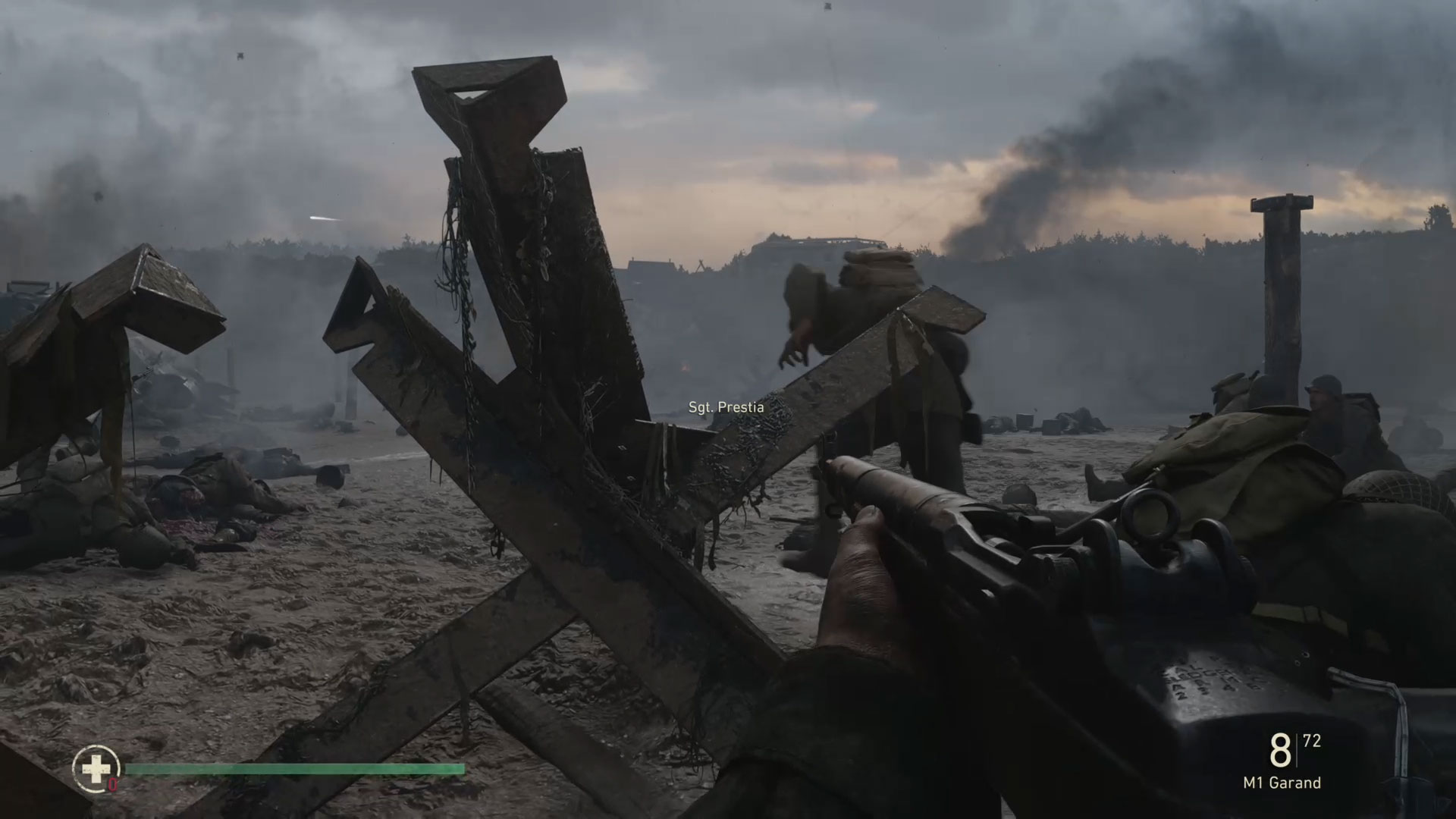