What is smooth motion, and how do I turn it off?

It’s a thing almost akin to a TV viewing sin: motion technology has its purposes, but watching films isn’t one of them. What is it for, and how can you turn it off?

There’s something TVs have done for quite a while, and if you’ve bought a TV in the past few years or sat in front of one, there’s a good chance you’ve seen it do this and just not paid attention.

Designed to make entertainment appear smoother, motion smoothing has been in TVs for quite some time, but it’s made for one purpose, and leaving it on all the time is like committing a film-viewing sin.

What is this “motion” mode?

More commonly known as smooth motion or motion smoothing, this form of motion compensation looks at the frames being rendered on the TV and adds frames to the process, smoothing out camera pans to make everything a little easier on the eye.

Also called “the soap opera effect”, it’s easy to understand why it gets this name: everything looks like it was shot with a cheap camera, and films that have been shot with hundreds of thousands of dollars worth of gear can be cheapened simply by leaving this on.

It’s not meant for movies or TV shows, however. Instead, it’s meant for something else.

Why is it switched on?

Call it one of those features that is set to be automatically on for every new TV, manufacturers leave it on expecting us to use it, and some of us may not realise that it’s even there.

But it is, and it is there for sports and high-speed panning, improving the flow of things like football and basketball which often force the camera to quickly pan over a massive field or court and can reveal judder as you watch.

Smooth motion technologies are therefore made mostly for sports, and while you can watch anything else with them, it may shift the look and feel of media such as television series, documentaries, and movies, simply because they were shot to a specific style and direction, while fast moving motion is something different altogether.

Fortunately, you should be able to turn it off, though you need to know what it’s called on your TV, first.

What is smooth motion called on my TV?

Finding your TV’s motion settings varies for every TV made, and that’s because every manufacturer calls it something different. Some of them leave it under pre-built settings, and these might turn it on and off, but for the most part, you find you need to go into the settings screen under display to find what it actually is.

Hisense’s take on smooth motion is found in the Picture Settings menu under “Motion-smoothing”.

Panasonic’s word for smooth motion isn’t a word, but rather the phrase “Intelligent Frame Creation”, and it can be switched off easily enough under the display settings.

If you own a Samsung TV, you’ll find the same technology thrown under “Motion Plus”.

Over in the world of Sony, you’ll find smooth motion called “MotionFlow”.

The list goes on and on, and generally if you find a TV delivers that weird too-smooth effect on films and shows, find the settings menu and go for a dive. If you find anything that says “motion” in the name, there’s a good chance you’ve hit the right spot, and can do something about it.

Will TVs ever evolve to automatically turn it on and off?

This is actually the question we tend to ask on a regular basis to manufacturers, and we’ve heard rumblings that it might happen. Whether it’s the sort of thing that TV makers can build in with artificial intelligence, computer learning, or just through some sort of metadata that is transmitted alongside the content, it should actually be possible.

Imagine if your next TV didn’t come with motion handling settings switched on, and they just switched on for the time you tuned in to watch the Socceroos make their way into the World Cup, switching off afterwards because you didn’t need it on for watching TV or movies.

That is a possibility, especially given how information is sent alongside programs to get TVs to run the high-dynamic range technologies.

We’re just going to need more content providers to do this, because until it happens, you’ll likely be left switching on this rather frustrating handycam-esque technology yourself. 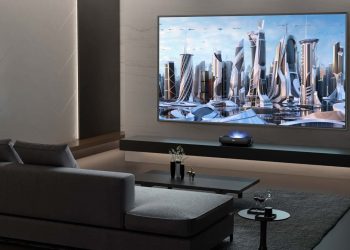 Hisense gets brightness, colour up with TriChroma Laser TV