Big TVs are great, but the cinema experience is typically bigger, and Aussies are about to see a new player there.

Recreating the cinema experience at home is something that has been happening long before COVID made us think long and hard about whether we wanted to sit in a theatre and watch a film.

While the big darkened room of a cinema with a massive sound system is difficult to bring to your home without a dedicated room, it’s not impossible. In fact, developments in recent years have made it more possible for people to do just that in their living room, as projectors become more capable and sound systems more versatile.

For the latter, you don’t necessarily need to throw speakers into the ceiling for a 3D sound, and can instead rely on soundbars and speaker systems that fire sound up, bouncing the sound around where you sit. A capable Dolby Atmos soundbar can do the job, with something like a Sennheiser Ambeo or Sonos Arc offering that capability, and there are plenty of others out there. Samsung even has a massive 11.1.4 spatial soundbar system on the way.

That only really leaves video, and while you can use a big screen TV, these can get expensive as you push into bigger sizes.

The norm of TVs might be 55 and 65 inches, but that’s hardly a size reflective of a cinema experience, with 100 to 150 inches more like where you might want to start thinking. It’s not quite the 13 metre minimum you can expect from a cinema screen — they typically start at 45 feet — which translates to 540 inches, but few of us have a massive room sit in solely for that size of a picture. In comparison, a 100 to 150 inch screen is going to offer a 2.5 to 3.8 metre screen, and that’s plenty big for most homes, or even backyards for a backyard drive-in style experience.

In that option, you may want to check out one of the many 4K projectors, and this week, Australians have another, as newbie Anker looks set to join Aussie retail with a projector, called the Nebula Cosmos. 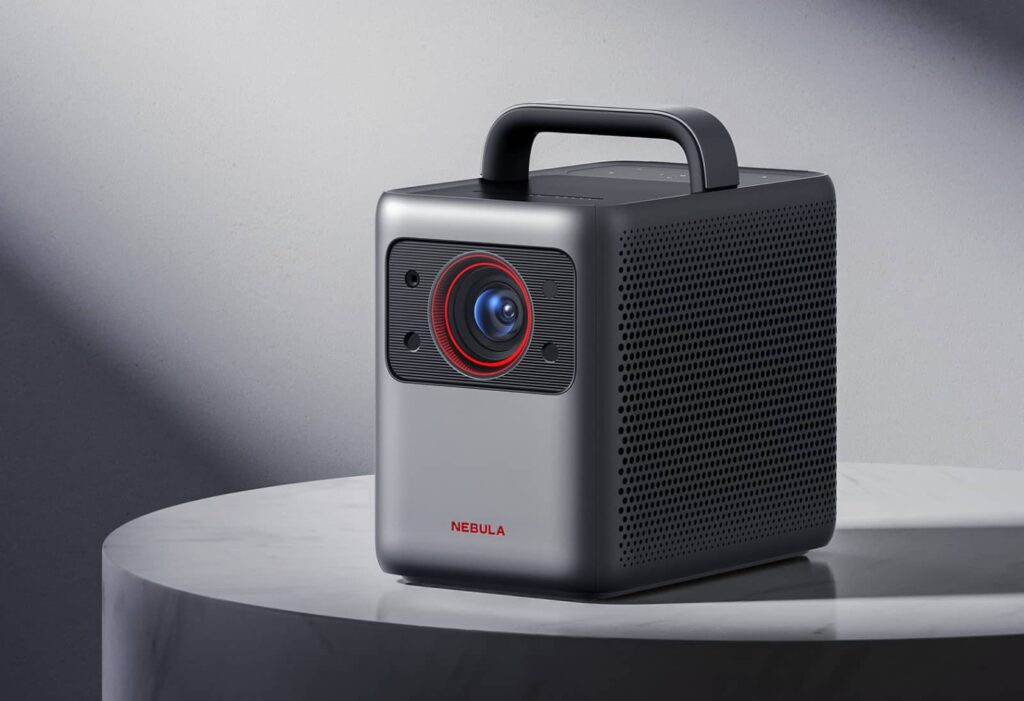 Anker isn’t a brand that has had a lot of presence in Australia until recently, so this one comes a bit out of the blue, though it does produce gear for a lot of areas, including earphones and chargers.

For projectors, Anker’s first Aussie option is a 4K laser projector, using a long throw system that uses the old logic of “the further back you set it, the bigger the picture”, distinct to the set size of laser TV, which is a short-throw laser projector aimed at a screen.

Anker’s Nebular Cosmos 4K Laser Projector won’t come with a screen, but does offer a guide, projecting roughly 60 inches at the smallest distance of 1.68 metres from the screen, while 150 inches will require a projector position of further back. Like regular projectors, you’ll push it back and the picture will get bigger.

However, the Anker Cosmos is apparently built for 150 inch projections in a box that can be carried, complete with a handle on top. It also supports Android TV and has Chromecast built-in to send video its way, plus an HDMI connection out the back, alongside a USB port, which we’re told can load video off a flash drive for a surprising way to stream big screen video.

There’s support for HDR here using HDR10, plus an autofocus technology and keystone, so you can correct for screen protection, while audio is apparently factored in with two 10-watt speakers for mids and lows at either side of the projector box two 5-watters for highs just above that, but we’d probably still consider an actual speaker system.

Interestingly, it appears Anker looks to compete on price, offering a $4295 price for its 4K Laser Cosmos projector compared to what’s out there, such as Epson’s recent 4K laser projector which carries a cost of $8999.

As to whether’s Anker’s 4K projector can stack up to its competitors on picture quality, that remains to be seen, but given the price difference, it’s pretty clear what Anker is vying for, and leaves us intrigued to see how it will handle in an upcoming review.