Forget the numbers, we’re back on Roman numerals, as the B9 and C9 become BX and CX, and the wallpaper is made for the gallery.

It’s hard to argue with OLED TVs in the premium TV world, as they’re just so good looking. Offering bright, vibrant colours with the blackest blacks possible (because the pixels are off), OLED TVs are easily one of the nicest screen technologies you can find out there, and something LG has been steadily improving over the years.

In 2020, OLED technology is still up there, and in the new range, we’re not only seeing a change in model numbers, but some new features that almost give them the “X-factor” to make them stand out.

One of those features will be support for Nvidia’s G-Sync technology, which means gamers with supported Nvidia graphics cards in their gaming PCs should see synchronisation between the frame rate of games and their screen, effectively improving the performance regardless of the screen type. There’s also support for HDR and Dolby Vision IQ, which uses light sensors found in the TV to optimise the colour and darkness on screen based on what your room looks like, dealing with a problem that HDR can sometimes be too dark in certain scenes.

There’s also a change in how LG handles the models, which could make things easier for buyers. The new models jump from the “9” in the 2019 ranges (B9, C9, E9, W9) to an X, with the E-series LG OLED TVs from years past disappearing, while the B9 and C9 make the jump to the BX and CX TVs. Meanwhile, the wallpaper range of “W” TVs take on the gallery, becoming the “GX” range, effectively becoming the premium 4K OLED screens you’ll be able to find from LG, while the BX and CX sit in the more affordable part of the market.

The differences between the BX, CX, and GX models (above, from left to right) will likely be one largely focused around design with stand and frame differences, with the GX gallery offering an even more minimalist take on the design, complete with an ability to mount the screens to he wall flush with the wall, making them wallpaper screens like before. Available in 55, 65, and 77 inches, LG’s GX Gallery displays are essentially the best 4K OLED TVs you’ll be able to find, and range between $4,139 and $11,399.

Of course, the BX and CX range are still built to impress, and look to include some of the developments found in the GX range, too, such as a new processor to power those 4K experiences and upscale.

The BX offers up a Gen 3 LG Alpha 7, while the CX delivers a similar screen with a Gen 3 LG Alpha 9, effectively giving the LG CX OLED a bit of a bump in automatic screen changes, and being the same chip used in the LG GX Gallery OLED TVs, and a similar variant used in upscaling for LG’s 8K OLED TVs, too.

Essentially, the difference between the LG BX and CX OLED TVs comes down to pricing, stand, and performance, because while the screens and colour quality will likely be close, the CX should achieve marginally better results for a little different in price, while the LG BX gets the price of a premium 4K OLED experience down just enough to count.

To put that into perspective, the LG BX 55 inch will sit at an Australian RRP of $3599, while the LG CX 55 inch is a little under $400 more at $3959. While street pricing typically doesn’t look the same, it means that you can expect the LG BX range to sit closer to the $3K mark as a starting point, while the slightly more premium LG CX nets in a little more performance and quality for closer to the $4K mark, at least in a 55 inch model.

The higher you go in size, the more they each cost, though LG is at least making things a little easier to work out the difference by ditching the E-series this year, with a choice between budget in BX, a little better in CX, and then the premium wallpaper gallery range in GX.

They won’t be LG’s only 4K choices, mind you, as the company continues with its quantum dot-based “NanoCell” LED-backlit technology.

LG’s NanoCell TVs can’t offer the same black quality as their OLED counterparts because it’s a different technology, but with options across four ranges, they attempt to bring an LG 4K TV to more price points, starting at $1799 for a 55 inch Nano80, and fetching as high as $7439 for an 86 inch LG Nano91.

“At LG Australia we are committed to providing Australians with the biggest and best viewing experiences in the home,” said Tony Brown, Marketing Manager for Home Entertainment at LG in Australia.

“Our 2020 TV range is set to transform the way Australians enjoy their favourite content, whether it be movies, sports or gaming,” he said.

“We’re excited to provide Australian consumers with such a wide premium viewing offering to enjoy in shared spaces with family and friends.”

Out of the box, LG’s 2020 TV range will include support for the Apple TV app alongside some of those older TVs, letting owners access not only Apple TV+, but also the 4K movies and TV shows found on the Apple iTunes library without needing an Apple TV 4K. Support for Apple’s smart home products is also found in the TVs, including AirPlay 2 and HomeKit, while LG’s ThinQ voice recognition is also here, which works with Google Assistant and Amazon Alexa, as well. 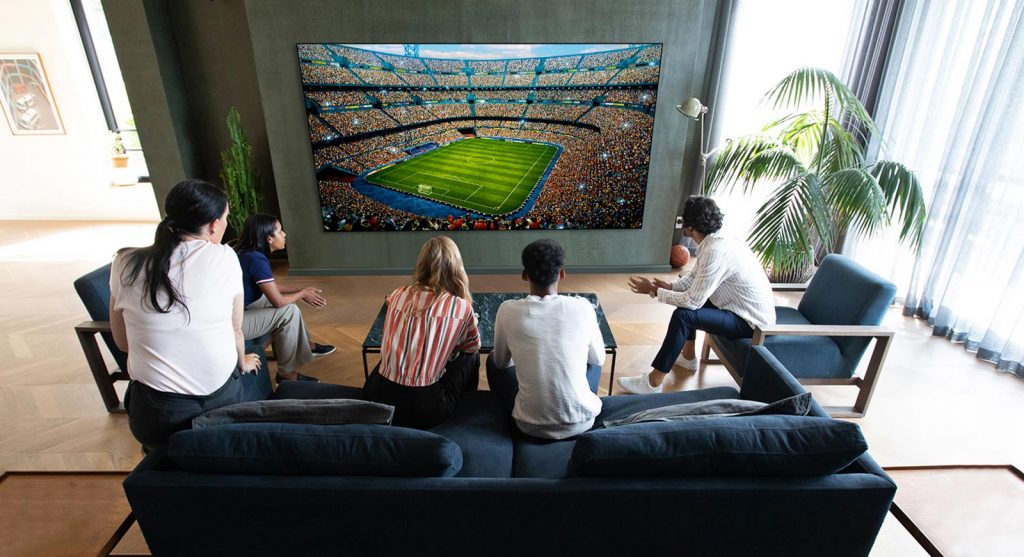