How does the COVIDSafe app work, and is it mandatory?

Australia is flattening the curve, but keeping it up is important, and that’s where the government hopes an app could make a difference.

With what’s going on in the world, there’s a good chance you’re doing the right thing, and spending most of your time at home with your family, self-isolating and self-distancing.

While that’s definitely important, also high up on the list is staying away from anyone who potentially has COVID-19, because that will help prevent any further transmission and stop the spread. Stopping the spread of COVID-19 may seem difficult because you invariably don’t know who has it, since the conditions aren’t always obvious. It manifests as flu-like conditions, and people are encouraged to stay home, but it can be transmitted even when you have no symptoms.

People are being diagnosed, however, and while Australia has had less than 10,000 cases, the 6-odd-thousand it has had (at the time of publishing) doesn’t mean the country is in the clear.

To assist, the Australian government has been working on a tracker to help you stay safe during these times. It’s not a cure — we don’t have that yet — but it is a way the government has worked on to try and help you limit the spread of the virus and who you come into contact with.

So how does it work?

How does the Australian government’s “COVIDSafe” app work? 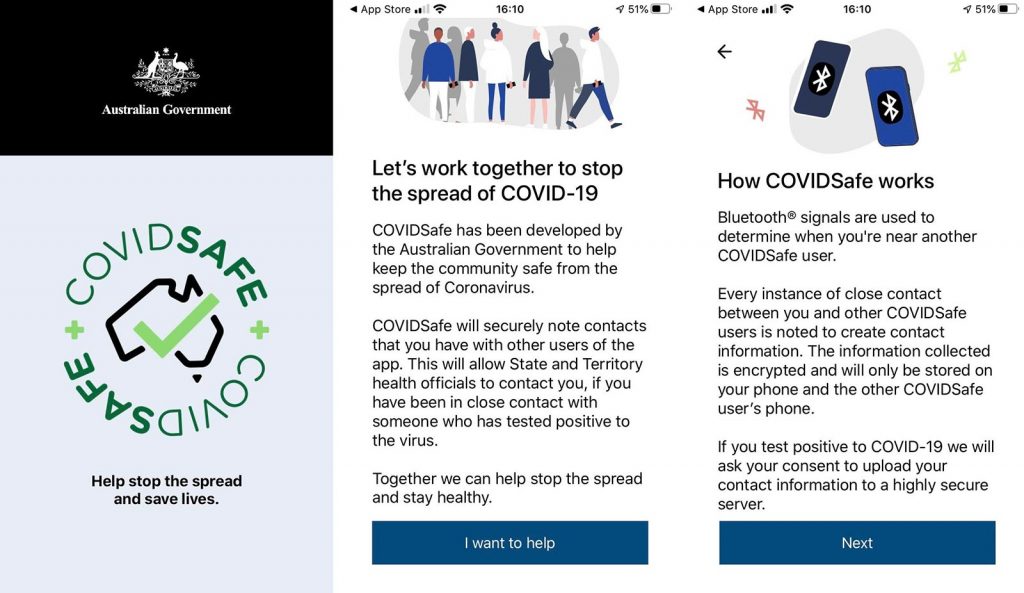 Available now for iOS and Android, the government’s approach comes in an app called “COVIDSafe” that is voluntary, but suggested.

To use it, people download it to their phones and run it, logging in with their name, post code, and phone number, which in turn sends a security number to have them log in.

From there, the app uses your phone’s Bluetooth to talk to other Bluetooth signals that have been within a 1.5 metre range, before sending this back to an Australian server. If you’ve been in contact or near someone who has been diagnosed with the COVID-19 coronavirus, you’ll get a message back about that issue. And if not, it will just continue doing its thing as normal.

In theory, it’s a way to track who you’re near with no GPS access, simply using Bluetooth signals to on people’s devices to do so.

It’s a sound idea for people to use it, though it comes with two potential flaws: privacy and reliability. 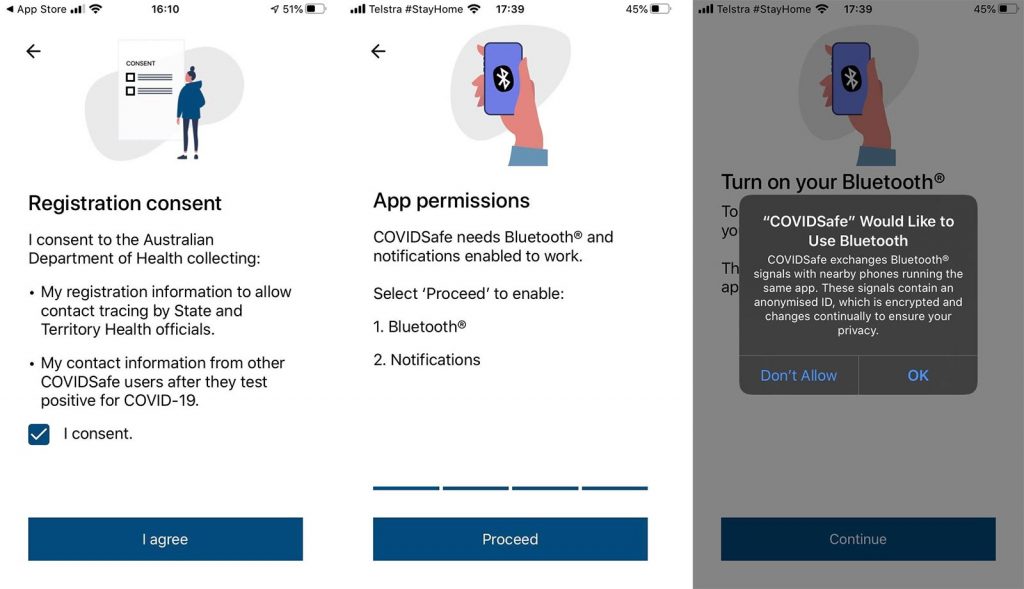 Without a doubt, safeguarding people, the economy, and life as we know it from the growing threat of the COVID-19 coronavirus is a serious issue, and one that requires everyone doing what they can. You only need to look at the rise in numbers in other places overseas, as well as the threats to employment and the mounting job losses, to see what sort of damage this thing can do.

But for many, a question of privacy will loom with this app.

On the one hand, the Australian government’s track record with technology isn’t always tremendously well thought out. There have been some great examples, such as the ATO’s eTax effort, though you only need to look at the security from the Census server failures in 2016 to a continued lack of a security certificate on the Bureau of Meteorology to understand a glimpse of why some people are squeamish over privacy in the COVIDSafe app.

The government hopes to alleviate some of those concerns with the Biosecurity Act Determination, which it says ensures the data is kept on an Australian server, and “cannot be accessed by anybody other than a state public health official”, as well as being unable to be used “for any purpose other than the provision of data for the finding of people with whom you have been in close contact with”.

Or to put it simply, the government is saying it won’t be used for anything other than contacting you if you have been in contact with someone with COVID-19.

What’s more, the data is deleted from your phone after 21 days, though we’re not sure if that necessarily means it’s deleted from the server. Our guess is no, but this is less about where you’re going, and more about who you’re incidentally near or having contact with.

Whether you trust the government on this becomes down to a personal thing, though feelings on the government for many may take a backseat to securing the country, and making it safe for everyone to leave their homes and continue life as normal.

For the app to work, though, there needs to be some sense of reliability, and that’s where things get a little murky.

An issue of reliability with the COVIDSafe app

Let’s just get one thing out of the way first: the COVIDSafe app has been out for a very, very short time, so questions to its reliability are based on what we’ve experienced, and big looming question marks over operation.

For starters, it’s optional, so whether you use it or not is going to impact some of its reliability in reporting. If everyone using it doesn’t have coronavirus, the app is doing its job, but also isn’t reporting anyone who does. Theoretically people who have COVID-19 will be using the app, but they’re not required to, as no one is, so the whole thing might be for nought.

Add to this the complexity in the app’s operation, and you start to wonder whether the app has the right approach on the whole.

To work, the COVIDSafe app has to run, using Bluetooth in the background, which will provide some dent to battery life. It might be small, but it will have one, but that’s not even the biggest burden. While battery life is a concern, running the app is a question mark of sorts.

On Android, the COVIDSafe app can run in the background, with the notification simply appearing in the dropdown bar of Android. Easy.

On iOS of the iPhone, the situation is a little more murky. You see iOS doesn’t allow the same background operations that Android does, and so to make the app work, it needs to be running at the time.

“To be effective, users should have the app running in the background when they are coming into contact with others. Your phone does not need to be unlocked for the app to work,” said Stuart Robert, Minister for Government Services.

That means the app needs to be running to work, which on iOS, means you need to be in the app to have it work in the first place. In fact, it’s something that the COVIDSafe app page points out, suggesting that “you should have the COVIDSafe app running as you go about your daily business and come into contact with people”, with people receiving “daily notifications to ensure the COVIDSafe app is running”.

It’s not difficult to work out just how unlikely that is to work, when people will need to be physically inside the app as they walk around and do their business on the iPhone for the COVIDSafe app to work. It’s not a background app like it is on Android, it seems, and you’ll need to have it open rather than using Twitter, sending messages, playing in Apple Music or Spotify, or really doing anything else.

In the few minutes we’ve had of using the app, we’ve found that if it’s not in use for a period of time, the app seems to close, and so you might think that running it a few minutes ago was fine, but the reality is you really have to be in the app for it to be present and active.

That compounds the issue of reliability, because while Android users can run it and use their phone as normal, the same clearly isn’t true of iPhone customers. To use the COVIDSafe app on iPhone, you need to hamper the experience of what it is to own and use a smartphone, running one app — just one app — as you move about.

Are there other solutions?

Some might argue this is what’s needed, but it also might be something the government has other options in.

For instance, we’re surprised to not have heard the use of technology similar to Tile’s Bluetooth trackers in use here.

Given that not everyone will have a smartphone or want to run a smartphone app — particularly one that clearly has major operational differences across operating systems — it’s surprising that people with COVID-19 haven’t been given a hardware approach, like say one of the Tile Slim card trackers. These are slim trackers that use the Bluetooth signature to talk to phones, and provided it was built for a similar purpose — talking to phones and Australian servers — possibly could be modified for this purpose.

Likewise, there’s what Apple and Google are working on together, which has yet to be released, but could prove instrumental in tracking and safeguarding populations from the threat of COVID-19. No one knows quite how long it will take to develop a vaccine, but having the world’s major operating system makers work together on a solution feels a fair bit more likely to work than an app system that works properly on one device, but not so much on the other.

The outcome for most people 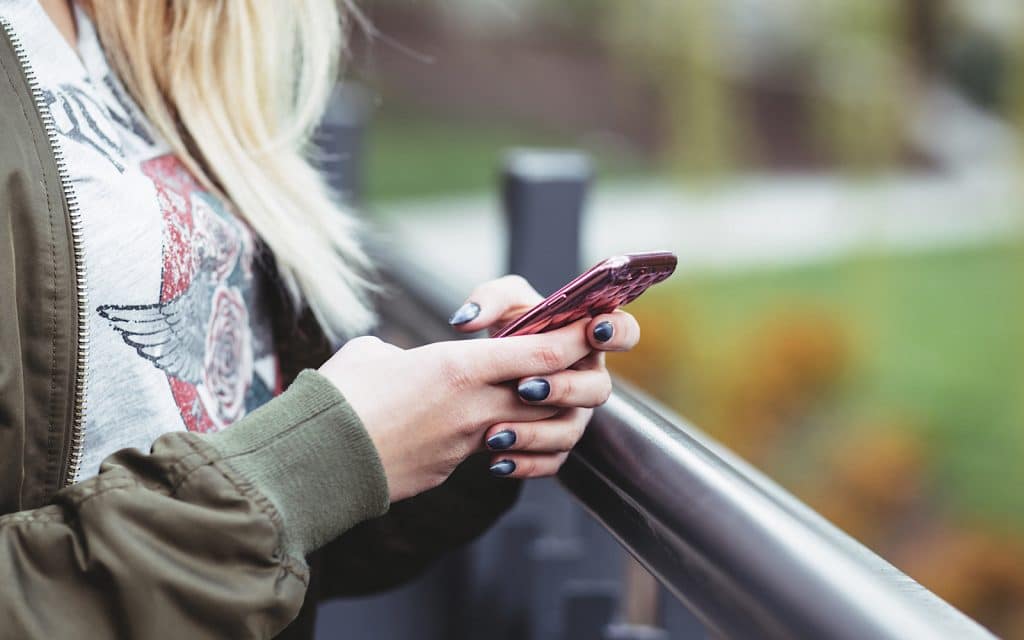 For now, the outcome for most Australians with a phone will be likely to give the app a go, despite its shortcomings.

Those shortcomings are many and clear, particularly the one where you won’t be told you’ve had contact with someone until after it happens.

This isn’t like a warning system with klaxons and alarm bells to keep you away from people as it happens: COVIDSafe is a tracker to alert you after the fact when you had contact or were in the vicinity, and so you could still get sick while using it.

But it does provide some ability to at least monitor people who are using the app, particularly if they have the infection, and that’s one step more than we had when this whole thing started.