Stereo sound is great, but it’s not the be-all end-all for feeling like you’re there. For that, you need a new way of recording, and Sennheiser has it ready.

The moment you learn about sound and speakers and headphones and such, you generally learn about “stereo” (shortened from “stereophonic”), the concept that we can hear sound from both sides and both channels. There’s the left channel and the right channel, and creative mixing by producers can help us to feel like the sounds we listen to are enveloping us thanks to the understanding of how this all works.

But stereo isn’t the be-all end-all of the audio world. There are more channels, something surround sound has revealed, and even 3D space with technology like Atmos which bounces the sound so that it feels like it is three dimensional.

And then there’s binaural, and this is an area few really dabble with.

In essence, it’s like stereo in that it is made for your ears by recording the left and right channel, but it’s also like 3D audio because the sound is recorded from the ear’s point of view. Rather than mixing the audio from a left and right viewpoint, this is about how the ears are hearing things, and is especially useful if you’re looking to be more immersed.

The funny thing about binaural audio is that it works for regular stereo headphones, but that its recording requires something different, with microphones set up at the ear level to get that whole sense of spatiality right.

In the few instances that you could find binaural recordings, that would mean complicated sound setups, and in an age where virtual reality productions are starting to become the norm, that means the makers of sound hardware have to think on their heads.

Sennheiser appears to have done that, and this week has announced the release of a smart headset, or more specifically, a headphone that is actually a pair of microphones in each ear designed to capture audio via a smartphone using two microphones held at the ear level.

Called the “Ambeo Smart Headset”, it’s a first for Sennheiser and possibly Australia, with a locally available compact 3D recording headset that can capture sounds at both the left and right channel from the head of the wearer, essentially capturing the 3D audio from the ears of the person capturing it, playing it back later on for the listener.

The microphones are pretty clearly on the outside of each earphone, and these are a headphone, too, so you’ll be able to listen in as you record.

The cabled remote is where things are a little different, with an Apogee analogue to digital converter built into there, as well as a preamp for the microphone, and a technology provided by Apogee (which makes a lot of sound gear) called “SoftLimit” to automatically optimise the recording and apply a limit to prevent distortion.

In essence, the whole thing is a 3D microphone to be used at ear level, but it’s also one that requires a phone.

After all, you need to send these sounds somewhere, and that somewhere appears to be an iPhone, with the Sennheiser Ambeo Smart Headset developed for the iPhone first with its Lightning headset jack, meaning you have to have an iPhone or an iPad if you want to use it.

Right now, it’s an iOS only affair, relying on the Lightning jack and an iOS app to control the technology for 3D sound capture, and is especially focused on people with a need to capture the sound in as real a way as possible for that 3D sound space that is our very own ears.

Pricing to do that will hit you with a cost of $469.95, with the headphone/microphone combination available at JB HiFi stores across Australia. 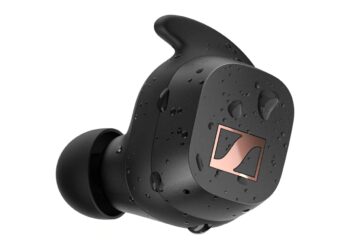