Canon helps find your inner photographer at Vivid in Sydney

Sydney’s massive festival of lights has begun, and it’s not even Chanukah. Yes, Vivid is back, and Canon’s educational photographic extravaganza is back with it, here to help you find your inner artist.

Australia has lots of amazing shows, but one that truly delights photographers yearly is seeing what artists can do with the backdrop of the town and the power of light.

Vivid is that show, and it’s an opportunity for the city of Sydney and its sponsors to come together with artists and show off the town by lighting it up with colours, with sculptures, with projections, and more, doing so for a few weeks and really making the Sydney night come alive with picturesque views just ripe for snapping a picture of.

Now in its eighth year, Canon is back again sponsoring the show, and doing what the company has been doing best since it got involved: trying to help people snap great pictures by improving skills across the board.

Over at Vivid, the company has once again made the bottom of the Museum of Contemporary Art its home, effectively turning it into Canon HQ, and not just filling it up with experts in their field to help you snap the best pictures, but also a host of cameras and lenses people can rent for the evening to get the best image, as well as folks from the Canon Collective ambassador team to help you get those shots and go on guided photo walks.

Inside Canon’s temporary HQ — temporary for the length of Vivid, that is, which ends on June 17 — budding photographers and anyone else will find low light photography workshops and studio sessions, with the opportunity to print out photos snapped from the night on Canon’s photo printers, something the company offers for free. 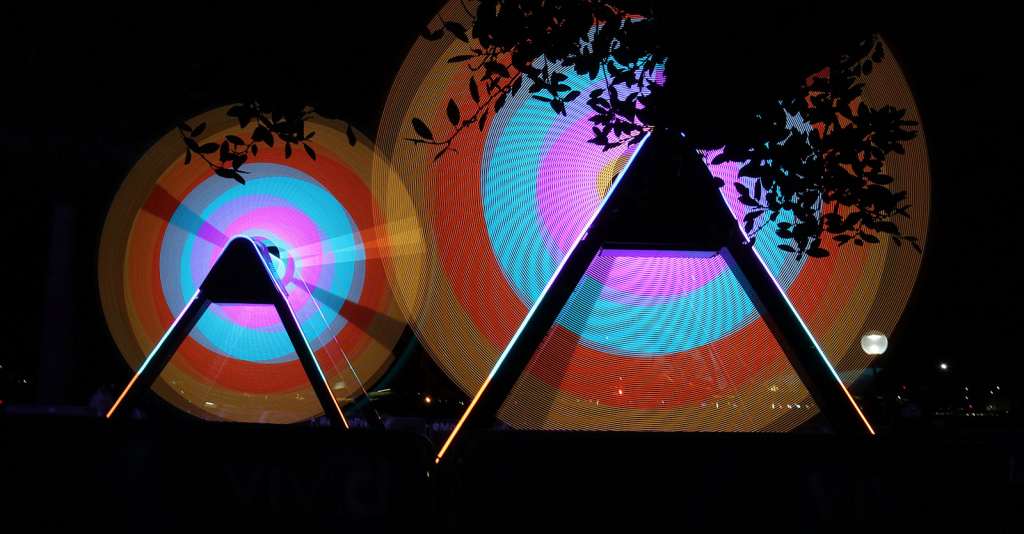 Sure, technically there’s an underlying motive for all of this — selling cameras, printers, and other bits of optically-based equipment — but as photographers (which is where this journalist started), we appreciate the push to get people to taking better photos, as it not only gets people thinking about the overall image, but feeling better about what they snap and the images they make as a whole.

Even if you don’t end up loaning the cameras, playing with the hardware makes for solid research, and earlier in the week, we spent some time with Canon’s tiny EOS M6, using the space of an hour for a photo walk to not only get to know Sydney during Vivid, but spend some time getting to know the camera.

In that short space of time, we were able to play with a positively tiny mirrorless that offers better ergonomics and controls than we had anticipated, and certainly better than once was, with the right amount of wheel controls at the fingers, making it a small interchangeable lens camera with enough control for manual photographers who might want a slightly smaller kit.

Even walking around with the bare basic kit lens, we were able to get some decent photos, though the short time with the EOS M6 did end up being a bit too short, making us yearn for a review time.

But it was a nice deviation for the night, and something anyone can get out to do in Sydney either on a weekday or weekend throughout the next couple of weeks.

Sydney’s Vivid runs from the end of May through to June 17 across much of the city, though you’ll find most of the exhibits down by the waters of Circular Quay, The Rocks, and Barangaroo, with Canon’s HQ at the MCA at the Quay.