Comics aren’t just in print form. If you want to read them on your phone, and buy digital comics, too, here’s what you need to know.

There’s no shortage of ways to read books in the digital era, whether it’s via EPUB or Kindle, or maybe through a PDF, but books aren’t the only reading material you can check out.

If you’re someone who fancies a bit of entertainment in the comic book form, you don’t need to rely solely on printed copies, and can instead check out digital comics. Phones can read them, as can tablets and computers, and even eReaders from Kindle and Kobo.

So just how do you do this: how do you read comics ob a phone and tablet, and how much will it cost?

Devices that can read comics

First up, let’s talk devices, because if you own a device, you can probably read a comic on it. Android, iPhone, iPad, Windows and Mac… these days, any operating system can read digital comics, you just have to know what app and comic book format you’re looking at.

Testing it through the vast assortment of gadgets and devices available, you can find for comics of any format on pretty much any device, whether you want to do this on your phone or tablet or computer or whatever. Even eBook readers can handle comics.

All you really need to do is work out type of file your chosen device will take, and where to get them from.

Before you plan to spend money, you may want to check in quickly and learn about formats digital comics come in. After all, this isn’t like the standard printed paper world, and much like how your phone tends to take photos that work on many devices but not all, so too might the comics you buy.

It’s a little like Kindle vs Kobo and everything else, because some comics will play nicely with some devices, and others won’t.

If you encounter a “CBR” or “CBZ” file, that’s essentially an archive of images not unlike a ZIP (in fact, a CBZ is a zip), with images inside. CBR and CBZ files tend to very much be the lifeblood of many digital comic downloads, and they can be played by lots of devices, ranging from phones to tablets to computers and so on.

Digital comics can also come in the PDF format we’re all used to, plus the EPUB format books arrive in, something that also works eBooks readers not made by Kindle, as Amazon’s Kindle eReader uses its own proprietary format. And if you use a service such as the Amazon-owned ComiXology, the comics downloaded there are proprietary and only readable in that app, as well.

Speaking of Kindle, you can find digital comics on a Kindle, but they come in its own format, and this typically can’t be shared outside of a Kindle device or the Kindle app on those other supported devices.

Simply put, if you have lots of devices you want to share digital comics between, look for CBR, CBZ, EPUB, and PDF. We’ve found CBR and CBZ files tend to look better as comics on Kobo devices, so consider using these if you have the competitor for the Kindle. If you want to use an iPhone, iPad, Android, Mac or Windows, consider EPUB, CBR, and CBZ, though we’ve found EPUB tends to be supported natively on iOS and Android. And if you don’t mind being stuck inside an app or a specific device, Kindle and ComiXology might be fine, as well.

Then it’s just a matter of finding a place to buy digital comics from, and that’s where things can get a mighty bit interesting.

One of our favourites places to grab comics from, Humble Bundle isn’t actually a comic store. More of a game marketplace, it provides bundles of software and other forms of entertainment as a form of donation, allowing you to buy a bundle of stuff and donate some of the proceeds to charity.

While Humble was built largely for games, it has grown over the past few years to encompass comics, as well, with comic bundles offering DRM-free comics matching a theme that you can pay for and download to whatever device you plan to use.

Comics found on Humble Bundle typically arrive EPUB, CBZ, and PDF, meaning they should work on nearly any device you have.

Another of the online game stores, Fanatical offers up eBooks and comics at times, allowing you to purchase comics when the bundles pop up, much like they do on Humble.

It’s much the same sort of process: spend money on books and you’ll be able to download them to a device of your choosing, picking the file format you want and running it.

Apple’s own eBook store offers an assortment of comics, but also works as the default EPUB reader on an iPhone or iPad, making it something you can use to find comics, and even read the EPUB files you might be downloading to your device.

In the times we’ve tried this, we’ve copied over files to a device and run them, allowing the Books app to import the files, and then running them. We’ve found EPUB works well through this, but you can find other readers on Apple devices, too, handy if you have CBR and CBZ files.

Google’s approach to online book purchases offers comics and graphic novels from within the Google Play Books app, which is Google’s native app.

Google Play Books mightn’t be the best native EPUB reader, and seems to want to upload those files, meaning big EPUBs won’t work here at all. But you can find comics directly from within the Google Play Books shop, so if you want them to be synchronised between Android devices, it’s one option worth looking at.

Alternatively, Android owners can find a variety of apps that handle EPUB, CBR, and CBZ all too easily on the Google Play Store, as well.

Australians don’t get access to ComiXology’s unlimited service, even though it’s owned by Amazon, but we can still buy digital comic books individually and in bundles, provided you don’t mind paying outside of Aussie dollars.

Australia doesn’t have a local ComiXology counterpart, but Amazon doesn’t stop us from buying comics from its service, allowing you to do so from its online store. It’s not integrated into the iOS app, so no go there, but if you’re on your browser, it works. Over on Android, you can buy comics directly from the app, giving you an easy to way to quickly grab comics.

Of course, the comics you download through ComiXology (or just “Comics” on Android) have to be read through the app, and despite the Amazon ownership, don’t work through a Kindle, so just be aware of this going in. Some can be downloaded later on using a ComiXology backup feature, but it won’t likely apply to every comic you find. 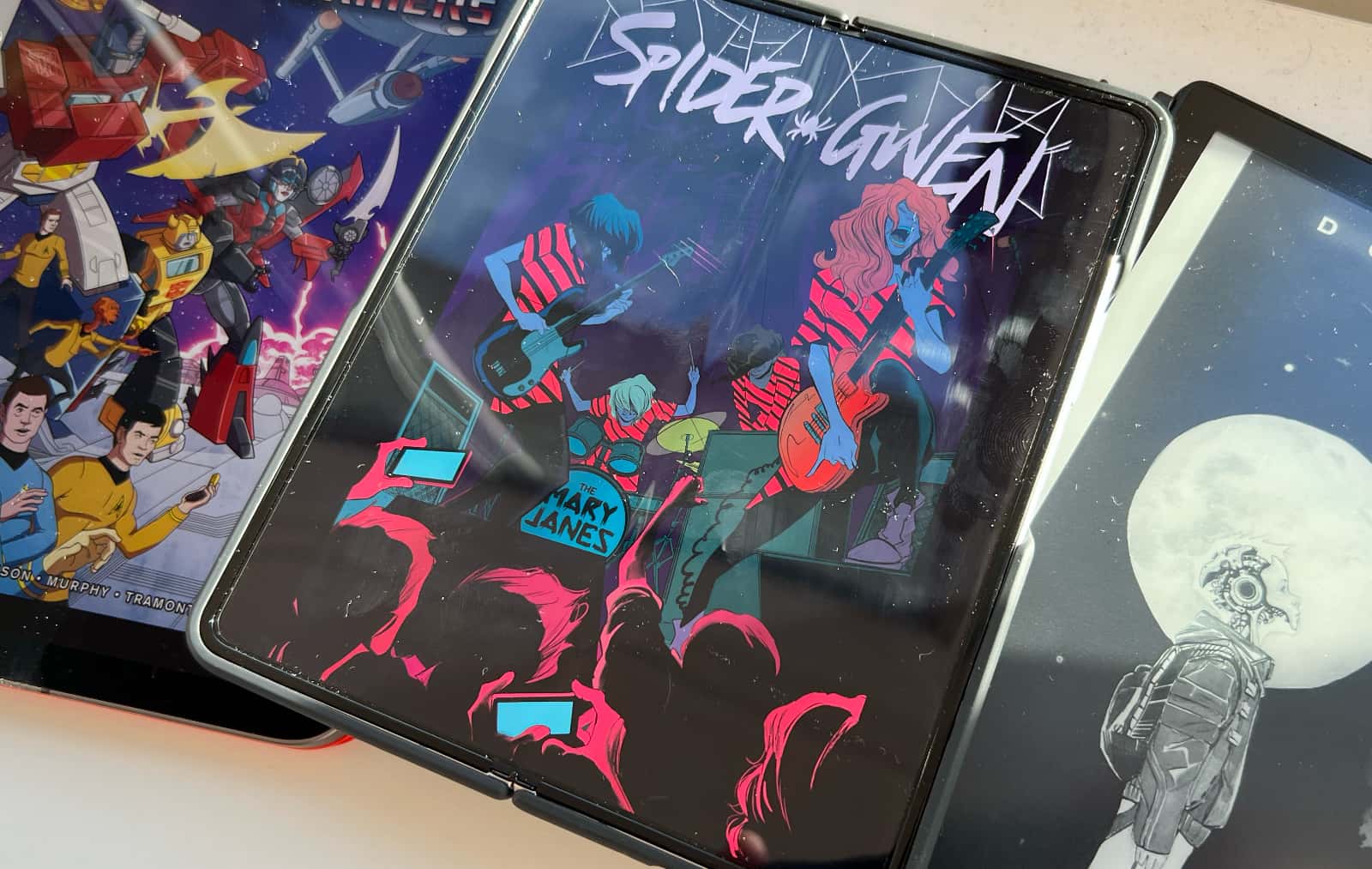 Buying individual titles is one way to read digital comics, but it’s not the only option. If you’d prefer to hand over money monthly for a Netflix-style approach to comics, there’s certainly some of those, even if Australia doesn’t get the best variety of these.

Amazon’s approach to unlimited reading doesn’t work with every book, but it does work with a variety of comics as well as the books it has on offer, providing reading material on tap for owners of a Kindle and those who use the app.

If you subscribe to Amazon Prime for its speedy delivery or Prime Video service, you may also get some free digital comics bundled in on the Kindle, something we discovered randomly.

Call it a taste of Kindle Unlimited, because that’s kind of what it is, with a selection of freely available books and comics found one Prime Reading.

Rakuten’s approach to the all-you-can-read Kindle Unlimited program, Kobo Plus provides a selection of comics in its buffet of books, as well, making it possible to read graphic novels and such for a monthly fee.

Another of the unlimited book buffets, Scribd launched in Australia earlier in 2021 mostly with a focus on books and magazines, but it does offer comics as well, some of which come from actual sources, while others are uploaded by users of the service.