Which is best: Apple AirPods Pro vs Sony WF-1000XM4

Considering a new pair of earphones, but aren’t sure how to decide? We’re pitting Sony’s WF-1000XM4 against the AirPods Pro to find out which is the best.

Apple has a great pair of wireless noise cancelling earphones, and Sony does, too. But which one is the better choice? This is a battle of the Sony WF-1000XM4 earphones versus the Apple AirPods Pro. Which will win?

We’ll tackle this section by section just like we normally would, and compare two of the better ranking wireless noise cancelling earphones against each other. Starting with design. 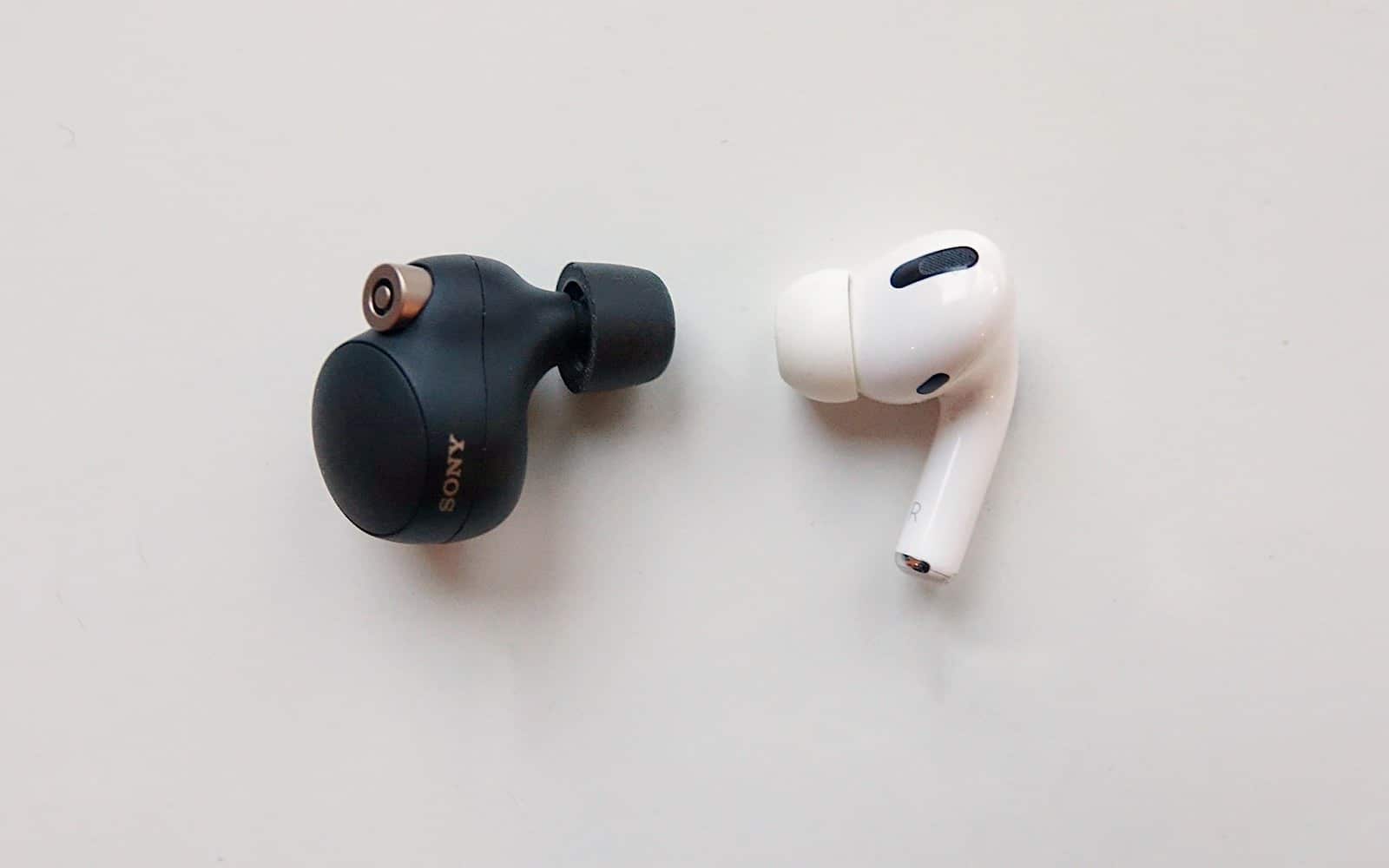 One is an AirPod and the other is not, but both have teams of designers working on the best way to throw a pair of earphones in your ears. Your ears are more complex than you might think, however, and so this exercise is more than just simply making something that looks schmick, but building something that really works.

Apple has gone with a shortened stem from the standard AirPods design, complete with in-earphone tips that sit nicely in the ears, while Sony has a larger and more bulbous design that’s supposed to sit in the hole of your ears, but stick in the larger space of your ears. That difference in design means Sony’s WF-1000XM4 may be working at a slight disadvantage when it comes to comfort and fit.

In Sony’s WF-1000XM4 earphones, the company has gone with a slightly bulbous design that might not suit all ears.

They’re designed to fit in the crevice of your ears comfortably, and Sony says it has scanned a lot of ears to make that happen, but it just won’t compute for everyone. We had a bit of fun tying to make the right earphone fit comfortably, and it didn’t always deliver it, though after some wiggling, we got there in the end.

That’s distinct from the AirPods Pro, which are the first Apple earphones to fit our ears comfortable. While we’re not huge fans of either the wired EarPods or the wireless AirPods — because earbuds typically aren’t comfortable, and definitely aren’t great at sealing — Apple’s earphone-styled AirPods Pro achieve a much better fit comparatively, and even do it better than Sony’s WF-1000XM4. 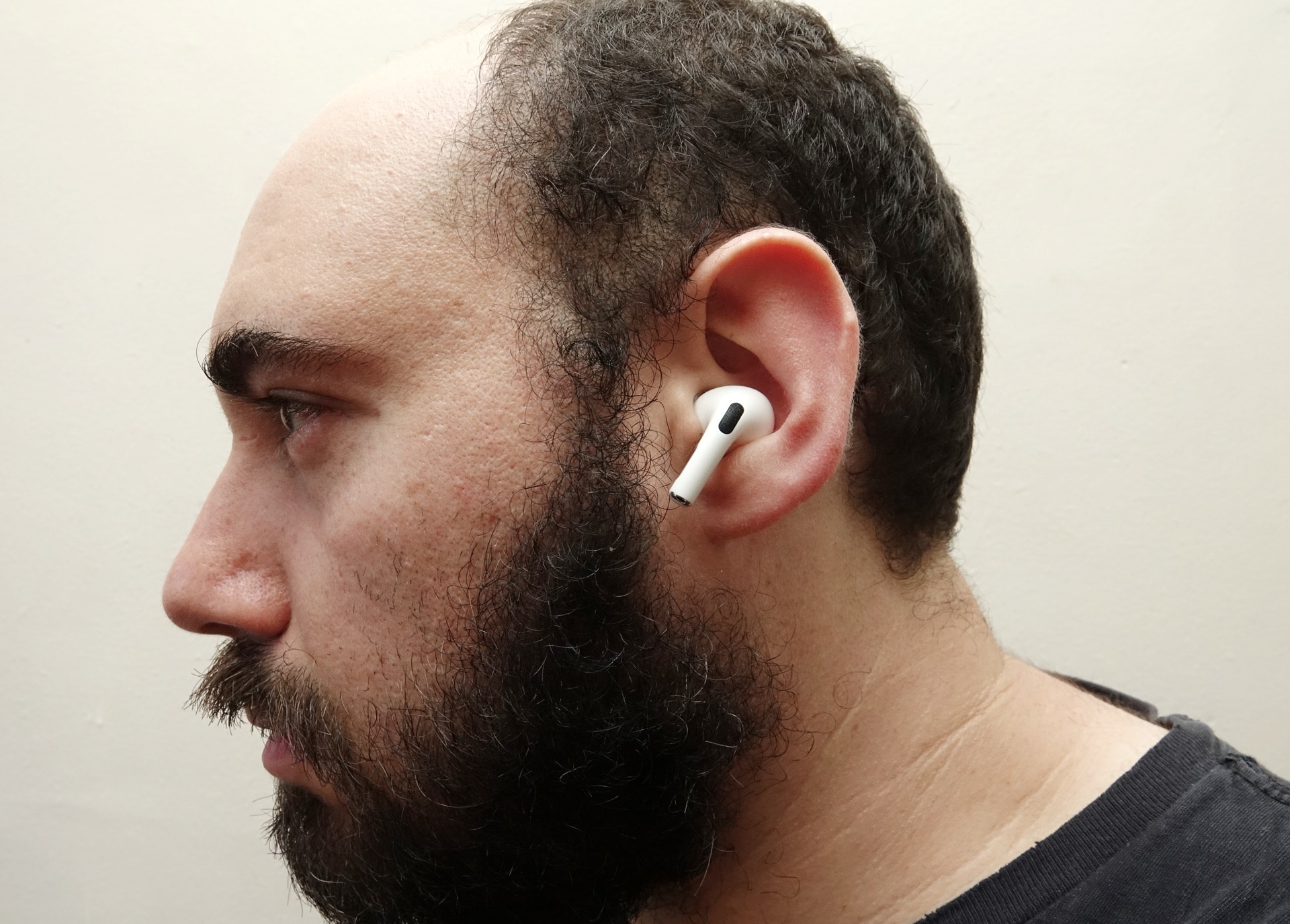 Carrying a rating of IPX4 in the water resistance department, neither earphone is well-suited to a surf or a swim, but should handle sweat or a light spot of rain well enough.

However the controls of the AirPods Pro aren’t great. You have the stalk on the side to use things, but it primarily consists of two controls: press to pause and play, and hold to chance cancellation modes.

Sony’s WF-1000XM4 gives you a lot more room to play with. You get a tap, a double tap, a triple tap, and a hold, and to make things even more fun, you get that on both sides in different ways, while the Sony Headphones app also lets you customise how each one works.

We’d call that a win for Sony here.

Both also work on Bluetooth 5 and deliver a great connection, with little to no dropouts for either in our tests, making each as reliable as each other.

Sony does offer the choice through its app on whether you’d like to preference stability or sound quality, but we’ve not experienced any app stability issues with the AirPods Pro, so while Apple doesn’t offer this support, it’s not a big deal either way. 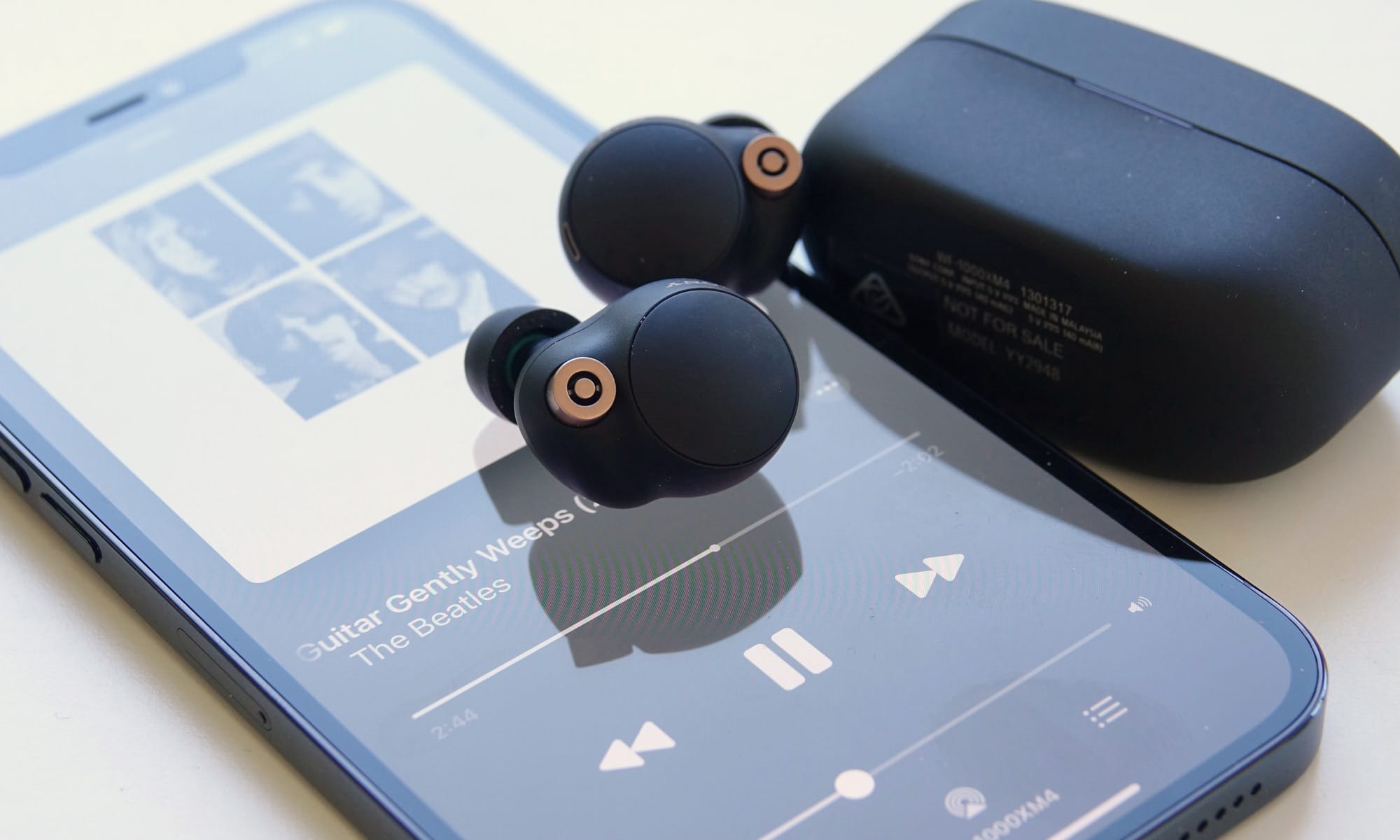 Next up is sound performance, and this one will be close.

Both the AirPods Pro and the Sony WF-1000XM4 cater for it, with Apple and Sony’s best engineers working to make the hardware top tier.

They’re honestly both good, and yet also both different. The AirPods Pro are clean and balance, while the Sony WF-1000XM4 follow in the footsteps of the other flagship Sony headphones with a balanced sound that’s just a little warmer than merely balanced.

Frankly, they’re both excellent, but we think Sony has the slight edge here. 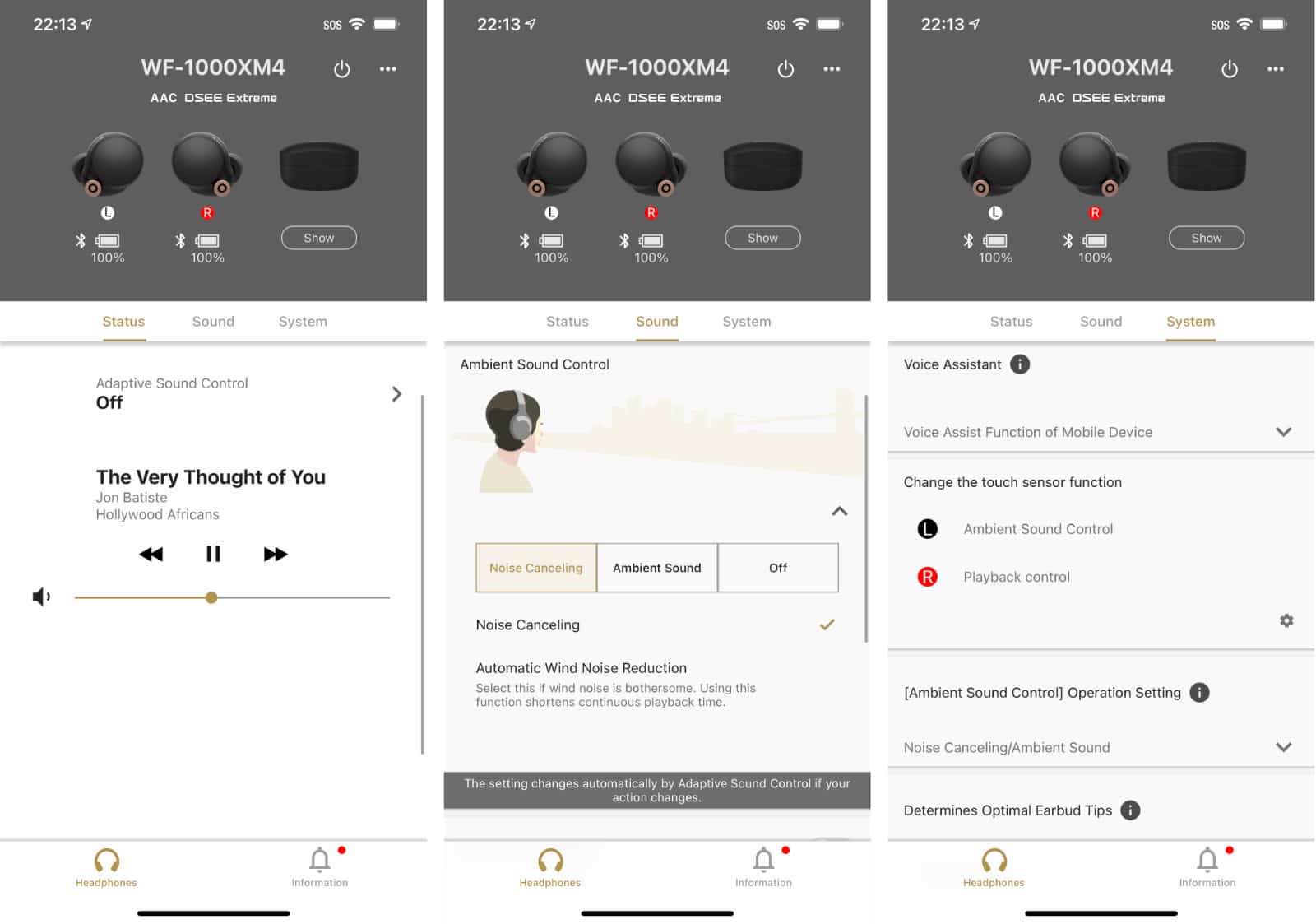 They’re also both quite strong in noise cancellation, but we think Sony might have the edge, partially because of an app.

Load the Sony Headphones app and you can grade the cancellation down to different levels, letting in little bits of sound for up to 20 grades of ambient noise and cancellation, while Sony also lets you map where your cancellation kicks in based on your physical location.

Both Apple and Sony have solid noise cancellation, but the Sony WF-1000XM4 does it a little better overall.

Both the AirPods Pro and WF-1000XM4 earphones are compatible with any operating system, with Bluetooth being the only major requirement. You might think that would leave us in another tie, but it’s not quite that easy.

You see Apple’s AirPods Pro only offer app-based controls from within iOS or iPadOS, with no app available on Android. Even though Apple owns Beats and Beats has an app for iOS and Android, Apple’s own earphones don’t, so there’s no Android app here at all.

Yet Sony’s app works across iOS and Android, making it platform agnostic, and securing the compatibility category for Sony in this one. 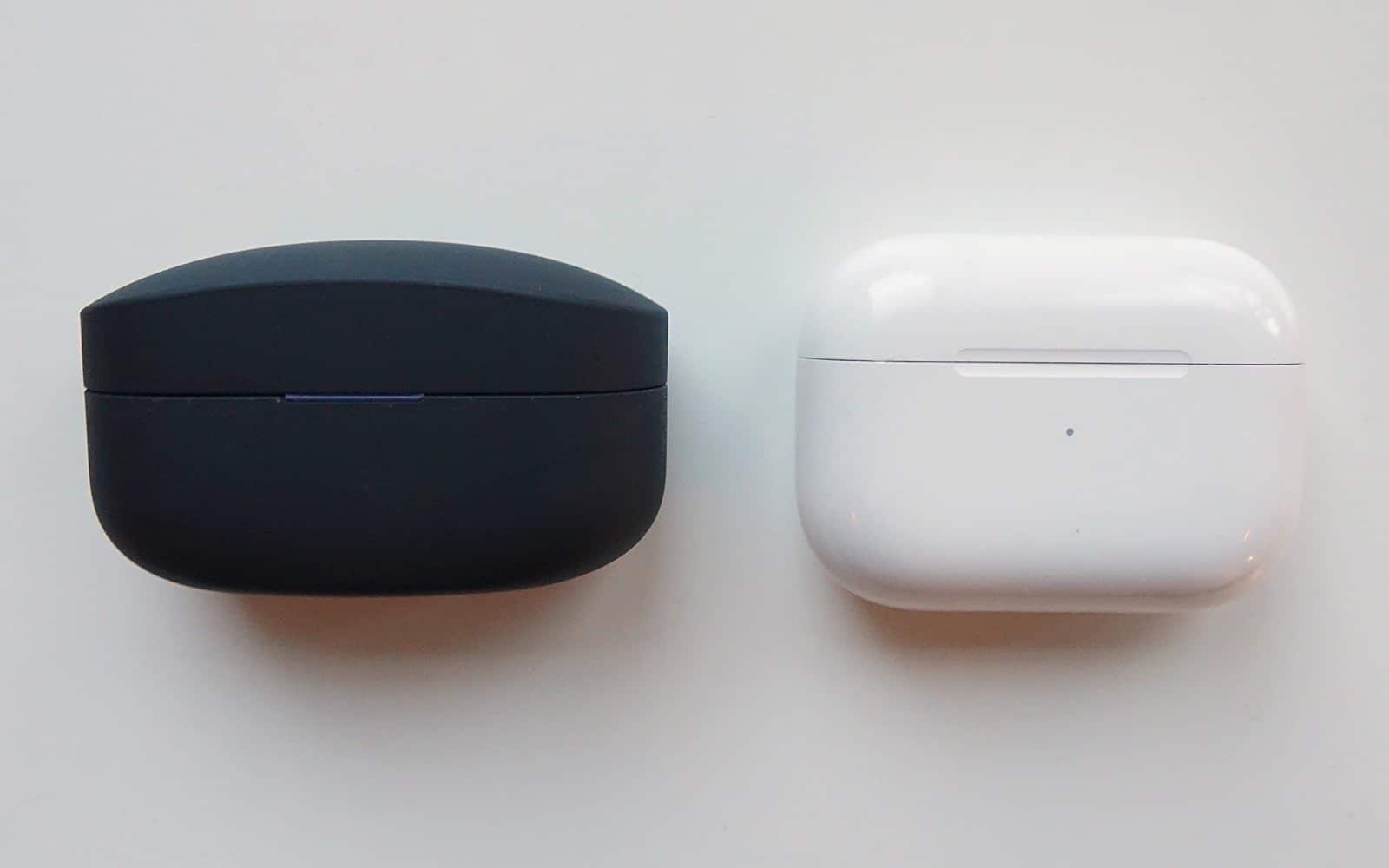 Yet whether you pick the AirPods Pro or the WF-1000XM4, you’re going to be left with roughly the same amount of battery life regardless.

There’s around 24 hours whichever you choose, but it’s split up differently. Apple offers up to 24 hours of charges in the case, with closer to around 4 in the earphones before needing to be thrown back in the box. Sony offers 24, too, but you get eight hours in the earphones with the remaining 16 in the box.

In short, it’s the same result, but split differently. You’ll get a full day of constant use if you need it, but only the Sony can be used for longer than five hours if you had to.

Despite that, we’re calling this a tie because 24 hours is the same across all regardless.

They both also come with wireless rechargeable cases compatible with the Qi wireless charging standard, and neither is better than the other. Both are pocket friendly and easy to carry, and each case is about as nice as the other.

They’re also about as pricey as each other, too.

With the AirPods Pro, you’re looking at a recommended retail price of $399 in Australia, while the Sony XM4 earphones sit at $449 locally. Both can likely be found for less than the prices Apple and Sony set, but they’re both hitting roughly the same amount on value.

What should I choose: Apple AirPods Pro or Sony WF-1000XM4? 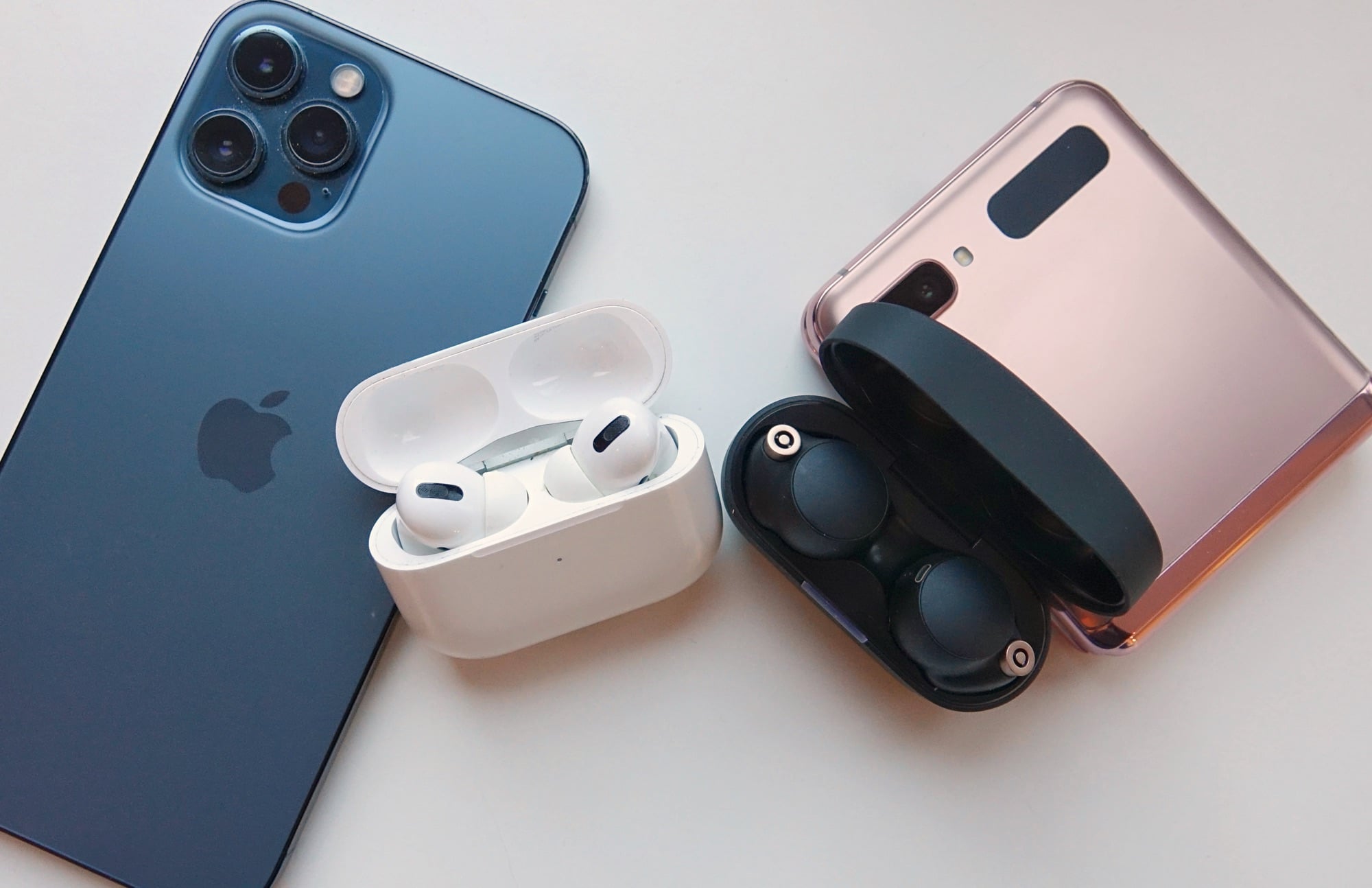 As far as our categories go in this versus battle, it seems like Sony has more of the edge when comparing the AirPods Pro with the Sony WF-1000XM4, but it’s worth noting that Sony may have a time advantage.

At the time of writing this, the WF-1000XM4 is brand new, releasing in July. Meanwhile, the AirPods Pro are due for an update, having been released nearly two years ago in 2019. That tells us a refresh is likely to be inbound very soon, and so while Sony technically has the win on more categories, it might not hold this long term.

Regardless of which one you end up with, both Apple’s AirPods Pro and Sony’s WF-1000XM4 are great choices ideal for ears, and for any operating system.

The AirPods Pro might have one advantage for folks with an iPhone or iPad, given the operating system is quick to prefer a pair of Apple-made earphones by preselecting them when you’re calling someone, answering a call, or even transferring the earphones to another Apple device, such as a Mac. Sony’s earphones aren’t afforded that support because they don’t use one of Apple’s H or W Bluetooth chips.

But this alone is minor, and we use the WF-1000XM4 (and pretty much every other earphone) with an iPhone and iPad, so it’s more or less a non-issue.

If you’re someone who likes to keep in Apple’s world, the AirPods Pro will likely be your bet, while Android users will likely gravitate to Sony’s wireless earphones.

However both are great, and whichever you choose, your ears will likely be happy all the same.