At well under $100, the Skullcandy Dime are a surprising pair of cheap earphones, delivering better sound than expected, alongside some issues that you then might associate with the word “cheap”.

Looking a little like a key fob for your car and sized like no other inexpensive earphone we’ve seen, Skullcandy’s Dime joins the world of truly wireless earphones with a rather auspicious concept: cheap earphones in a properly compact size that you might actually like.

To date, Skullcandy has actually provided some interesting earphones, getting decent sound and great feature sets to often wallet-friendly prices, and at least one of those is targeted in the release of the Skullcandy Dime. Specifically, it’s the price.

Retailing in Australia for $69.95, the Skullcandy Dime are one of the least expensive pairs of wireless earphones, offering no cords or cables, a little bit of water resistance, and a very friendly price.

But what are you getting for that friendly price, and are these sub-$100 earphones genuine value or just plainly cheap?

Appearing in one of the smallest designs we’ve seen for earphones, the Skullcandy Dime are what happens when a pair of earphones imitate the classic AirPods style, but decide to shorten pretty much every aspect.

Featuring the stem popularised by Apple, the Dime are shorter in a full obviously plastic design, with a matte look that makes it much less premium and a little cheap-looking.

While they look cheap, they try to stand out to be a little more than just a truly wireless version of the mediocre buds that might’ve come with your phone, including a microphone on each side, earphone tips to hold in place, IPX4 water resistance good enough for sweat, and controls for volume, playback, and triggering the voice assistant on your phone.

They sit in a case where you can see the earbuds through them, thanks to little slots carved out for the stem. If you can’t see the stem through the case, your Dime earphones aren’t in the case, and are, in fact, somewhere else. Go look for them.

But the case is also very, very small, resembling a fob for car keys, and packing in a max of 12 hours of battery life for the earbuds which carry a max of 3.5 hours. 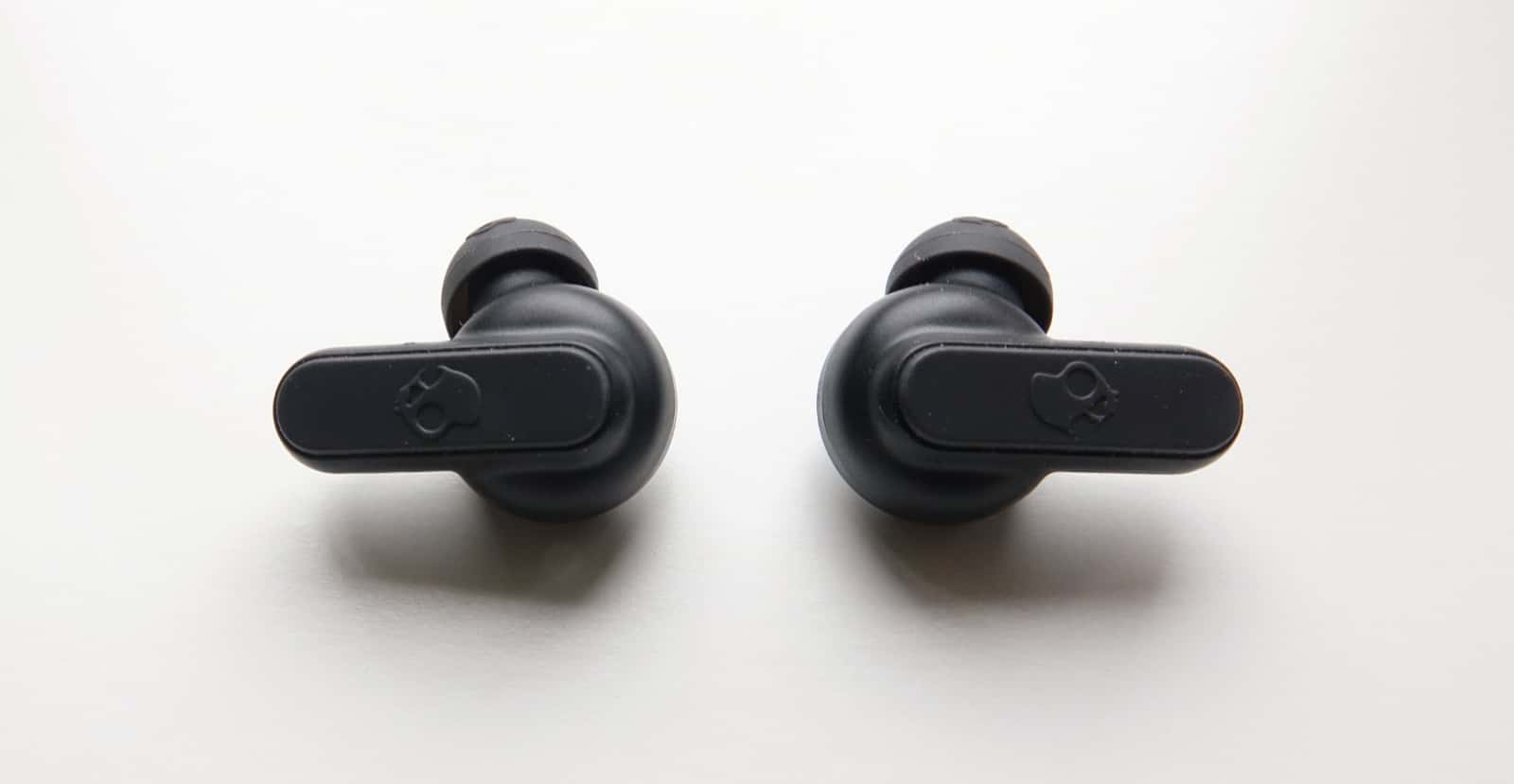 Throw them and get to using them, and you’ll find that while controlling playback on earphones is kind of a necessary thing, Skullcandy hasn’t made the Dime remarkably easy to use.

Throwing them in your ears is easy enough, relying on the in-ear tips for an earphone style of earbuds. Though these are comfier from where this reviewer sits than the 2nd generation AirPods, the tips and design aren’t the comfiest, and you may feel it grinding against your ears around the 40 minute mark, as we did.

But you can get over that, especially given the $70 buck price in Australia.

However the controls are largely problematic, feeling sticky and broken, as if Skullcandy couldn’t muster the power to put something actually usable in there. 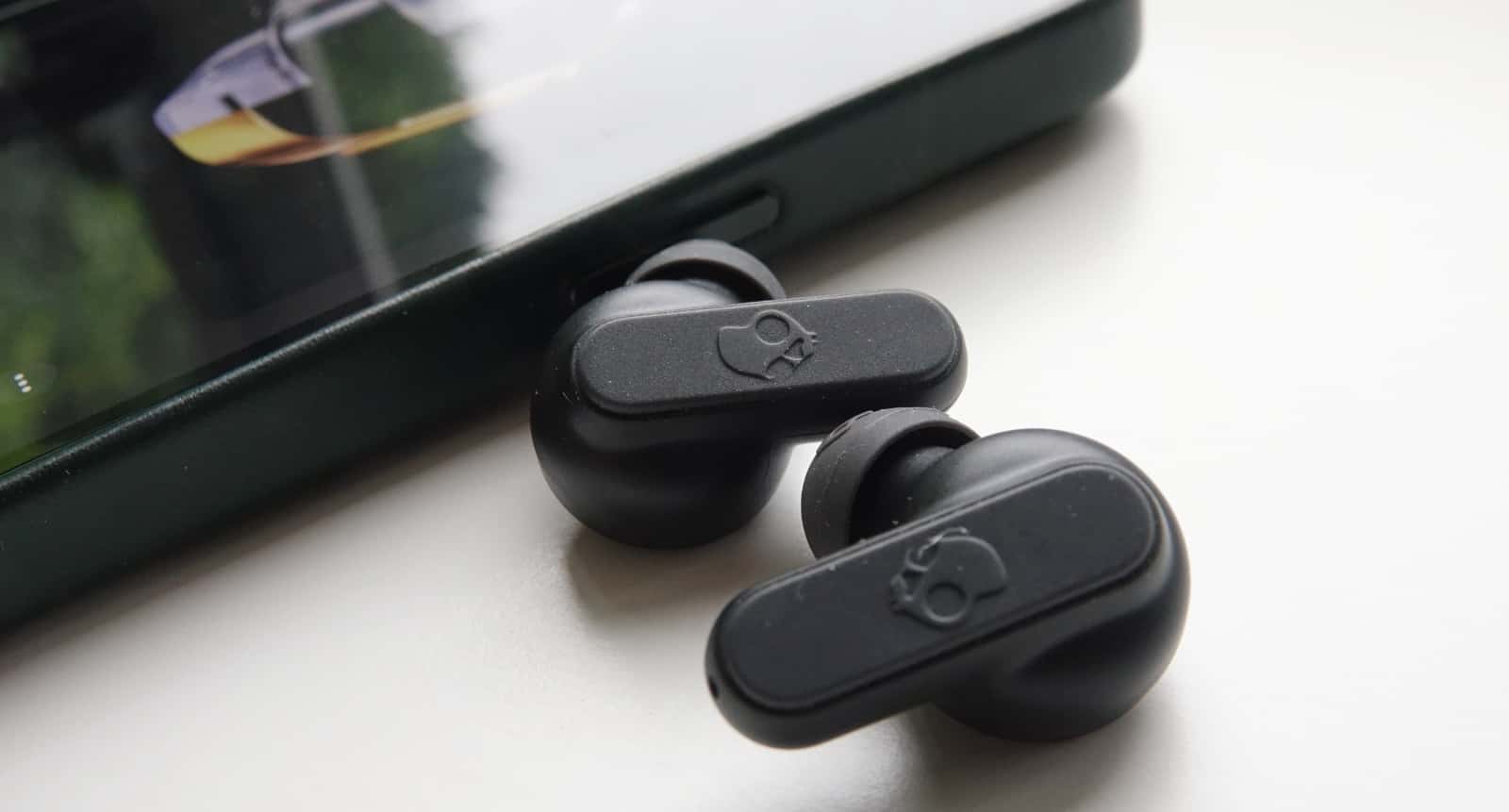 Behind that little “skull” on the short stem, there’s a button, something that forces you to press quite hard to a sticky surface that doesn’t work quite as well as it should. It’s actually quite cumbersome how simple the button should be, but how it doesn’t quite work the way you want it to, with the cheap plastic build of the Dime earphones preventing an easy press of the button.

Get it working and you’ll find the button responds to presses, with one press on either side pausing and playing, while two presses on the left or right sends the volume down or up, respectively.

The button presses are actually all about standard for inexpensive earphones, we just wish the button was less clunky and easier to press.

Usability aside, you could probably get by listening to the Skullcandy Dime without actually ever pressing a button. Frankly, we did for the first few hours, controlling the playback using only our phone.

And with that, we turned to the Pickr Sound Test, the way we review every sound device that comes through our site and something you can listen to for yourself.

As usual, that starts with electronic, where we’re treated to a better sound than we expected from a pair of cheap-as-chips earphones, with a fairly balanced approach to the highs, mids, and lows, with notable punch on the bass. In both Tycho and Daft Punk, it is surprisingly impactful, with a good sound that will be good enough for most. 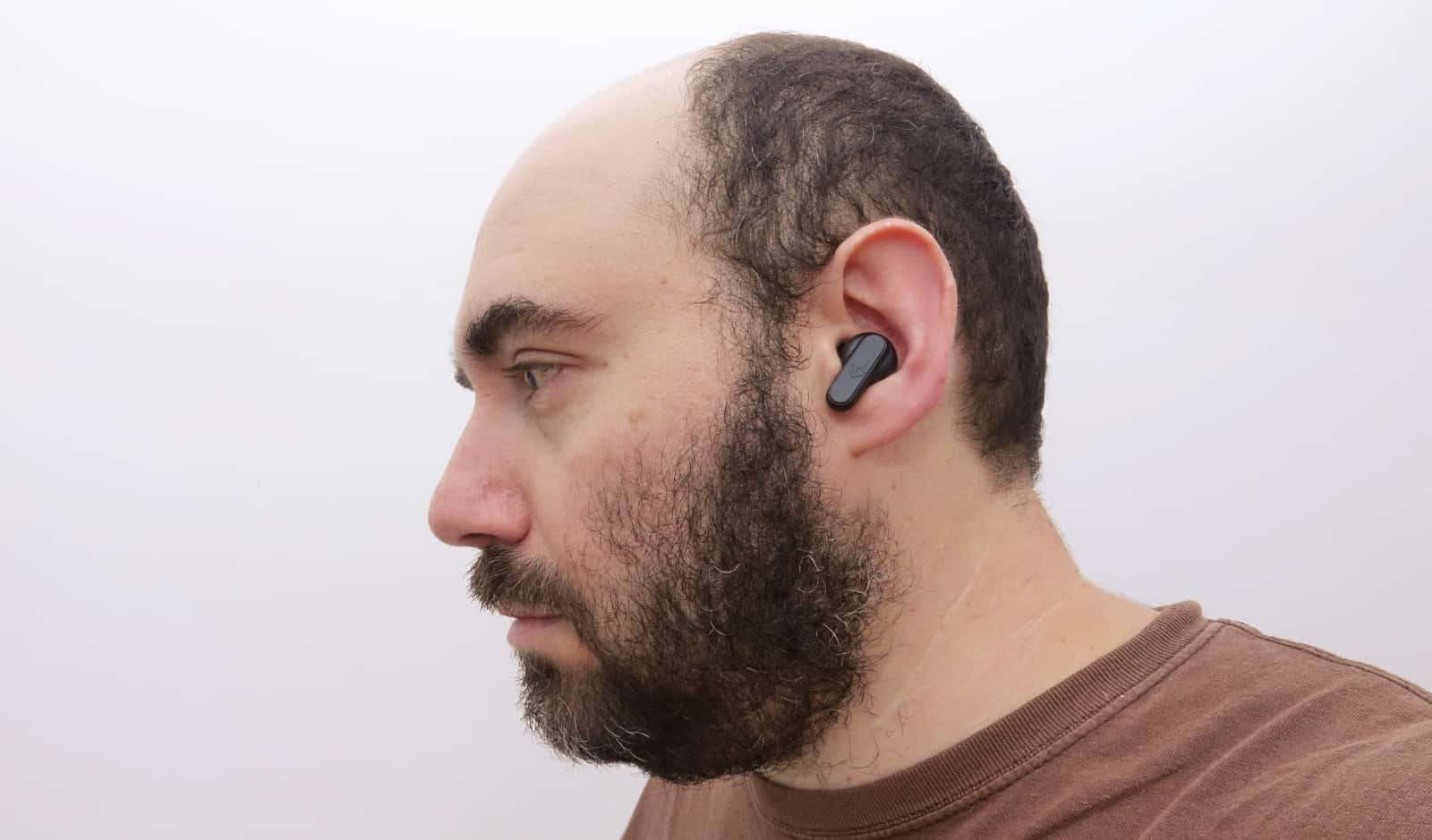 It’s a similar experience in pop, R&B, and rock, where the sound is comfortable and easy to listen to, with enough impact for young listeners, though missing the detail older ones might look for.

In Ariana Grande’s “Into You”, the deep and immersive sound we’re looking for to throw us into the sound is missing in action, with a soundstage that lacks any real dimensionality. There’s stereo separation, but it’s not spaced out all that well, and the Dime sound good but cheap, appearing a little better than the basic earphones your mobile might have come with, but not by much.

These aren’t bad, and are better than what we expected, delivering not so much a bright earphone, but something with an attempt at balance, it’s just missing the nicety we want for in earphones: the sense of space that great earphones come with.

In short, there is no sense of space in the Skullcandy Dime whatsoever. It’s just sound in your ears. That’s not going to be a major issue for everyone, mind you, and does suit younger listeners really just looking for that. 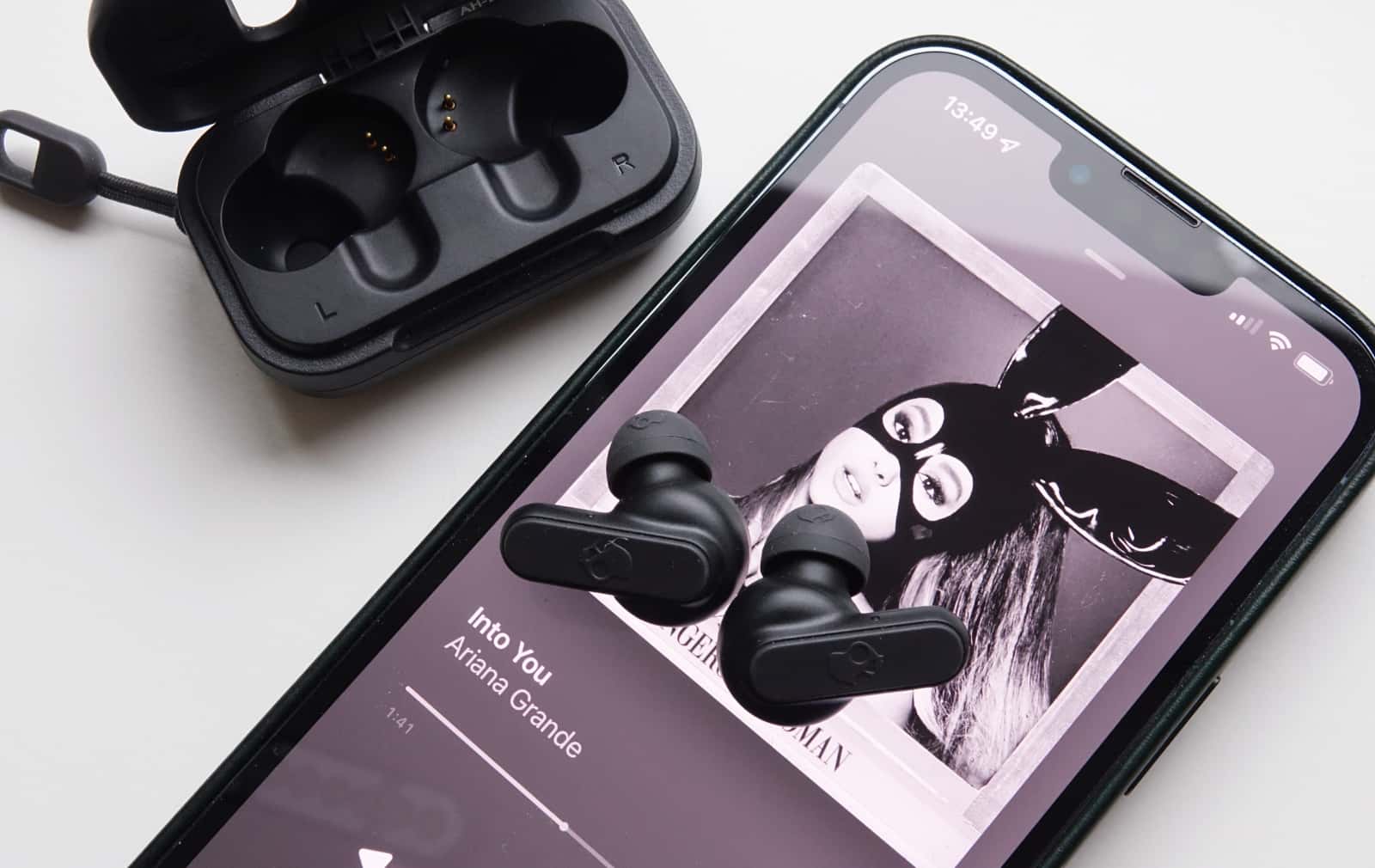 The battery is one area that may let you down, with a little over 3 hours of usable life, and then only enough for two charges in the case, supporting a hair over eight hours with the case, amounting to 12 hours in total.

In an age where five or six hours is normal for the earphone and at least 20 is likely in the case, 12 all up seems like a very, very small amount, and one that needs rectifying ASAP.

Not helping our thoughts is the inclusion of a microUSB port, which isn’t a total deal breaker, but does tell us just how budget the Dime are, using the preferred charging port from a few years ago and hardly today.

At least the price isn’t bad, although it comes with a caveat itself.

Priced at $69.95, the Skullcandy Dime are definitely cheap, but they’re also expensive in comparison to the US price, which sees the Dime priced at $25.99 in the US. Factor in the conversion, add a bit of tax, and it should still be under the $50 mark locally, which seems more on the ball than the $70 Skullcandy is pitching in Australia.

Granted, we’d still call the value relatively strong for what you’re getting in the Dime, but with such a great overseas price, it would be nice if Australians were given something comparable, rather than taxed for living further away.

The problem with the Dime is that while it brings surprisingly good sound to such a low price point, Skullcandy seems to have forgotten all of the other things that help make a pair of earphones great.

For instance, while the audio is fine, it’s also shallow, something you’ll probably forgive for the low price, but may notice depending on what you’re expecting from earphones.

The low battery life is another thing, and while many an earphone lets you keep listening past four hours these days, Skullcandy’s diminutive size means the Dime’s battery life is much lower, maxing out at 3.5 hours before they need a charge in that tiny case, which itself can only support two more charges. This is not a great battery life for a pair of truly wireless earphones.

There’s also no app, which may not bother you, but it is something Skullcandy is rather good at. Skullcandy’s app tends to cover custom profiles for equaliser tweaking, but you get none of that, possibly because these are the cheap seats for earphones.

And they feel cheap, too. The all plastic design and case isn’t exactly unheard of in wireless earphones, and even some of the best earphones every year are all plastic. 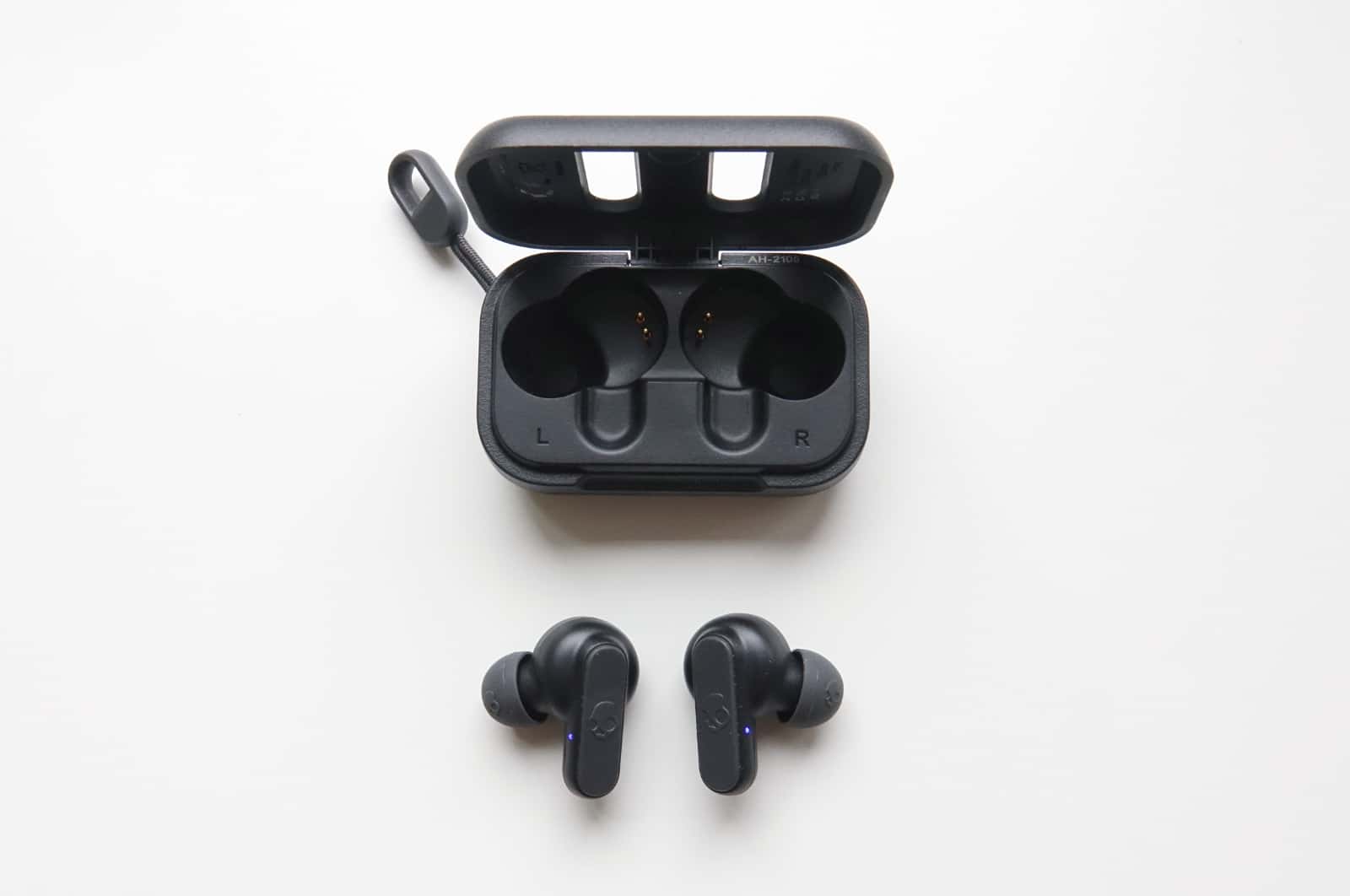 The problem is the Skullcandy Dime feels cheap, with the sort of plastic design that makes it almost appear as if it came out of a coin-based toy machine at a department store.

You’ll know what that is if you grew up in the 80s or 90s, with a quarter in the US or 50 cents to a buck in Australia netting you a cheap plastic ball with an even cheaper toy inside. That’s what the Skullcandy Dime earphones feel like.

In short, the problems with the Dime are that in building a cheap pair of earphones, Skullcandy fleshed out one of the most important attributes — the sound — but seemingly ignored the rest of the package.

It’s a little like buying a random brand TV and seeing it has a name-brand panel, and subsequently expecting it to perform as well as said name-brand: there’s a lot more that goes into a TV than just the name-brand panel. In the Skullcandy Dime, you’re getting a pair of earphones rather like that, with good sound, but not so much good anything else. 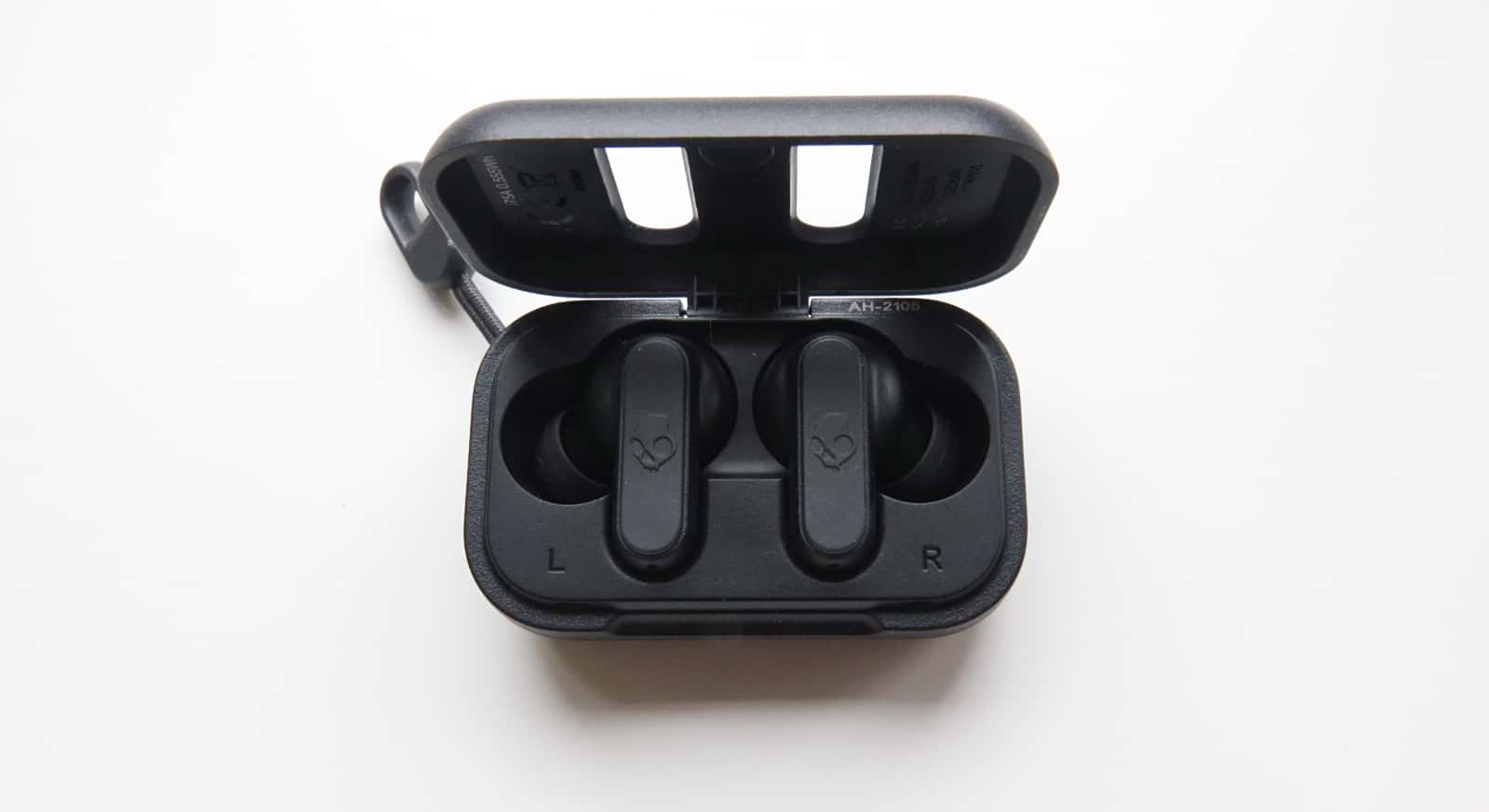 But for the price, they’ll be hard for many buyers to ignore.

At $70 in Australia, the Skullcandy Dime truly wireless earbuds may well fit the bill for people who desperately want something cordless and wireless, but aren’t keen to pay the typical over $100 for what these things normally cost.

There are reasons to consider the Dime, too. These are very small cost effective earphones that offer decent sound people will like, with niggles that may bug you. That includes the design, the battery, the usability, and even the price, once you compare to where the Dime are priced in the US. Basically, they have surprisingly good sound with caveats.

But there are people they also make perfect sense for, specifically kids and teens desperate for a pair of wireless earphones like mum and dad. If you don’t want to spend over a hundred, the Dime could make sense, not just because they’re inexpensive, but because the battery life kind of forces you to not listen perpetually like better earphones. 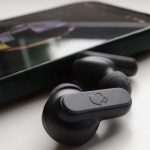