A new style of desktop screen will have you seeing double, but that also might make productivity that much more interesting.

Whether you work at home or in the office, there’s a good chance you’re using a monitor, as it just makes a laptop easier to use by giving you more real estate. That’s more or less a given, and while they aid how we work, the styles of them haven’t changed dramatically over the years.

At one point, we shifted from the more square like 4:3 screens to the widescreen 16:9 and 16:19 displays, and that’s largely where we’ve been stuck, providing a wide scope to viewing your screen’s real estate, which gives you a lot of width, but less on the height.

Screen sizes change over the years, as has the technology and the speed of those screens, but the aspect radio is still pretty wide, and means if you’re buying a monitor today, there’s a good chance it’s wide, ultra-wide, or so wide it practically curves around you.

LG is trying something a little bit different, though, building a display that will have you seeing twice the width, kinda sorta.

It’s a concept coming in the LG DualUp, a monitor that looks a little different, almost as if you returned to the older square-ish design of monitors, but somehow gave it enough room to stack two widescreen monitors on top of each other. 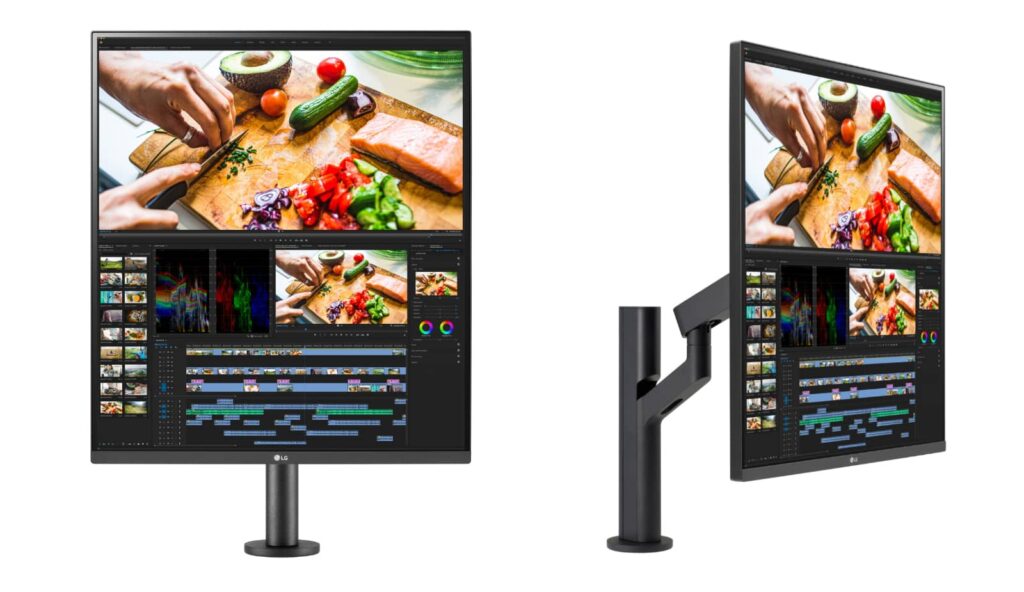 That is basically the idea here, with the DualUp 28MQ780 being a 28 inch screen delivering an unusual 16:18 screen ratio, which is basically two 16:9 widescreen displays stacked on top of each other in one almost square design.

Compared to the regular widescreen display, LG’s DualUp will look a little different, because instead of moving your head from left to right to take in all that width, you’re instead looking up and down for two windows on top of each other, but that is largely the point: the LG DualUp aims to be two screens in one.

The stand holding it down will offer height adjustment, as well as tilting, swivelling, and pivot controls, so you can move things as you need, while the screen type aims to keep things competitive with a 1.07 billion colour IPS panel, though there’s no touch support here. This is just a screen, but not a touchscreen.

“At LG, we are passionate about providing innovative technology that supports the ever-changing consumer demands for both home and office workers,” said Brad Reed, Head of B2B Marketing for LG in Australia.

“Offering a completely new form factor for the monitor screen, the DualUp Ergo will enable users to multitask with ease when completing creative tasks,” he said.

“It is an innovative solution that will help enhance productivity when working, particularly for those users who find themselves looking at information for extended periods of time on multiple screens or windows.”

LG hasn’t yet confirmed with Pickr whether the 28 inch DualUp will play nicely with every computer or operating system, but we’re checking.

In fact, outside of Apple’s recent Studio Display launched alongside the Mac Studio, this might be one of the more intriguing monitors we’ve been interested in reviewing in ages.

Australians can expect to find it in June, where the local price is expected to cost $1299.