Upscaling images just became a default feature in the latest version of Photoshop, and once you know what to do, wow, that’s all you need to say.

Now that the dust has settled and Photoshop’s upscaling feature “Super Resolution” has been out for a little bit, we’ve had the time to sit down and see what the whole thing is about.

A new feature built into Photoshop’s raw converter and image processor Camera Raw, Super Resolution allows Adobe to harness the powerful hardware you likely have lurking inside your computer, and connect it with some machine learning, using that to increase the size of your images if you need it. While it won’t be crucial to everyone, it’s a feature that many would have paid for over the years, with plugins often charging extra for the privilege and research that lets you do the same thing.

However Adobe’s addition is no extra plugin, and provided you’re a subscriber to the Creative Cloud, and you have an updated version from this month (March 2021), you have the technology already on your computer. So what is it, how does it work, and what do the results look like?

What is Adobe’s Super Resolution 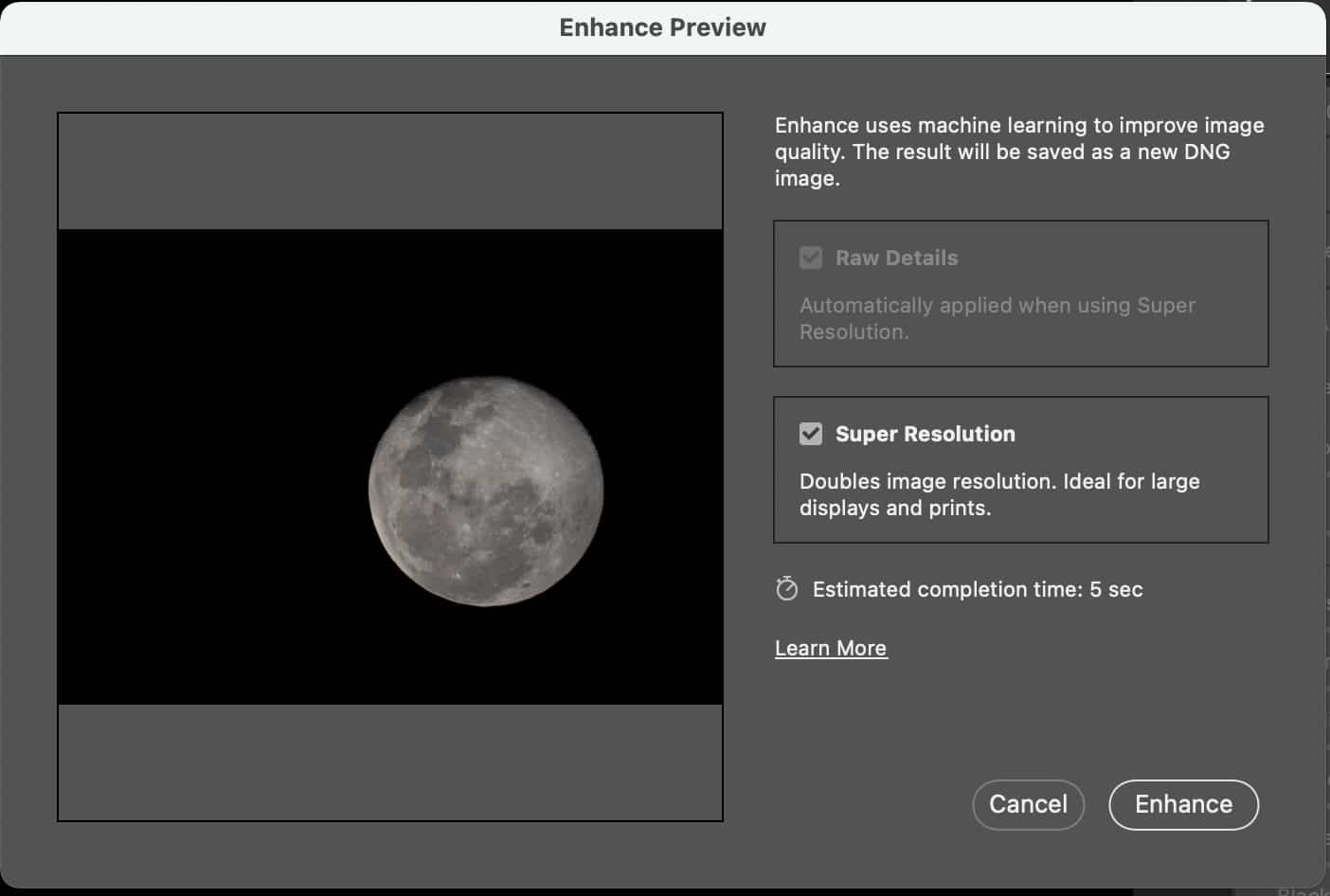 The technology is new, and something Adobe has rolled out in Camera Raw 13.2, enhancing an image using the Adobe Sensei AI technology featured in Photoshop. While it’s AI driven, Super Resolution takes advantage of a graphics processor, essentially using the hardware of a graphics chip to make the AI feature do its thing.

And what is its thing?

In the most basic of terms, Super Resolution allows you to supersize and upscale an image by simply pressing a button, upscaling by a magnitude of four while retaining the details. Super Resolution won’t necessarily improve the clarity, but it does aim to retain it as the image is sized up.

How do you make Super Resolution work?

If you have a copy of Photoshop, you’ll want to make Camera Raw is updated to Camera Raw 13.2.

With that in mind, from Photoshop, you’ll want to open an image using Camera Raw. If you’re opening a JPEG, it means changing the opening format to “Camera Raw”, which basically tells Photoshop to send a JPEG to Camera Raw instead of just to Photoshop. 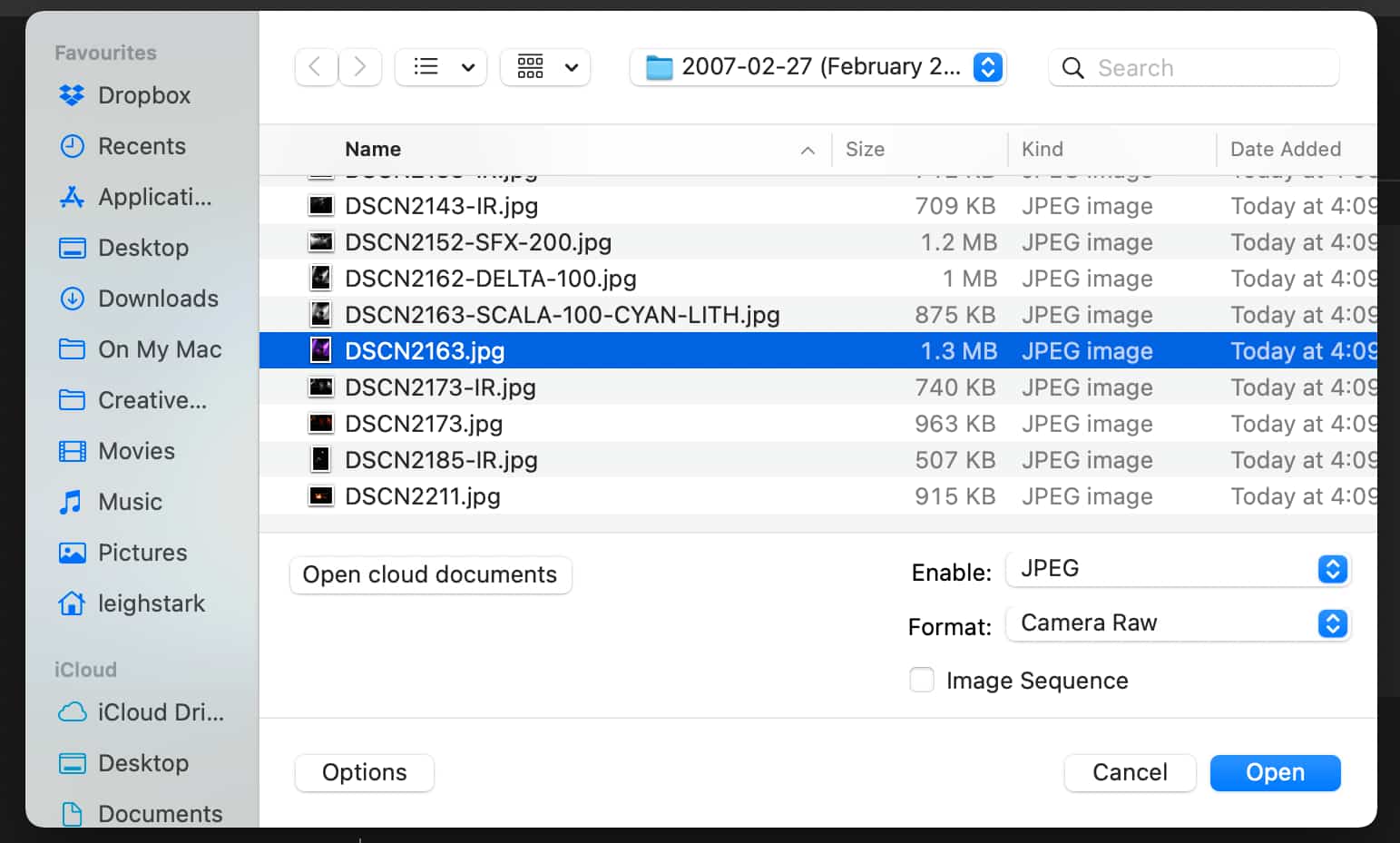 That’ll open the JPEG like a RAW file, and let you access the Super Resolution feature, which is labelled as “Enhance” under the three dots.

From there, you can run the image through machine learning to process and increase the size of the images.

Check out some of these results

We ran the upscaling tech through some of our older images, pictures sitting on hard drives back from before this writer was a technology journalist and when he was doing music photography.

Back then, the cameras weren’t always high res, or at least not to the level we have now.

In fact, these days, your phone will probably do better than the large cameras he used to carry around to capture bands and sports, back from the photojournalist days, and so while image qualities have changed, Adobe’s technology could offer the old images a new lease on life. Which is precisely why we tried it. 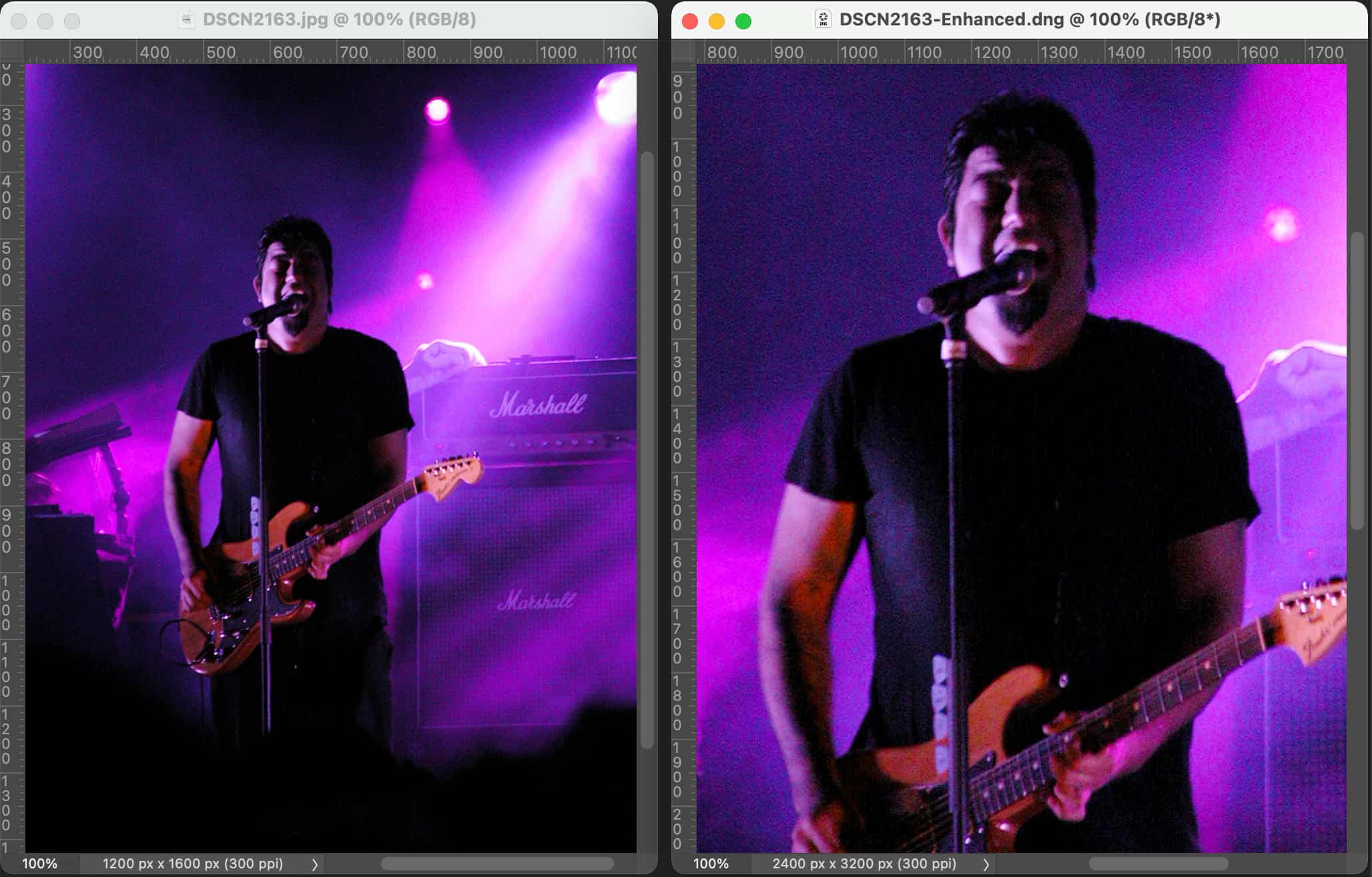 The detail wasn’t necessarily sharper, but rather Adobe’s Super Resolution had kept everything the same, except bigger. 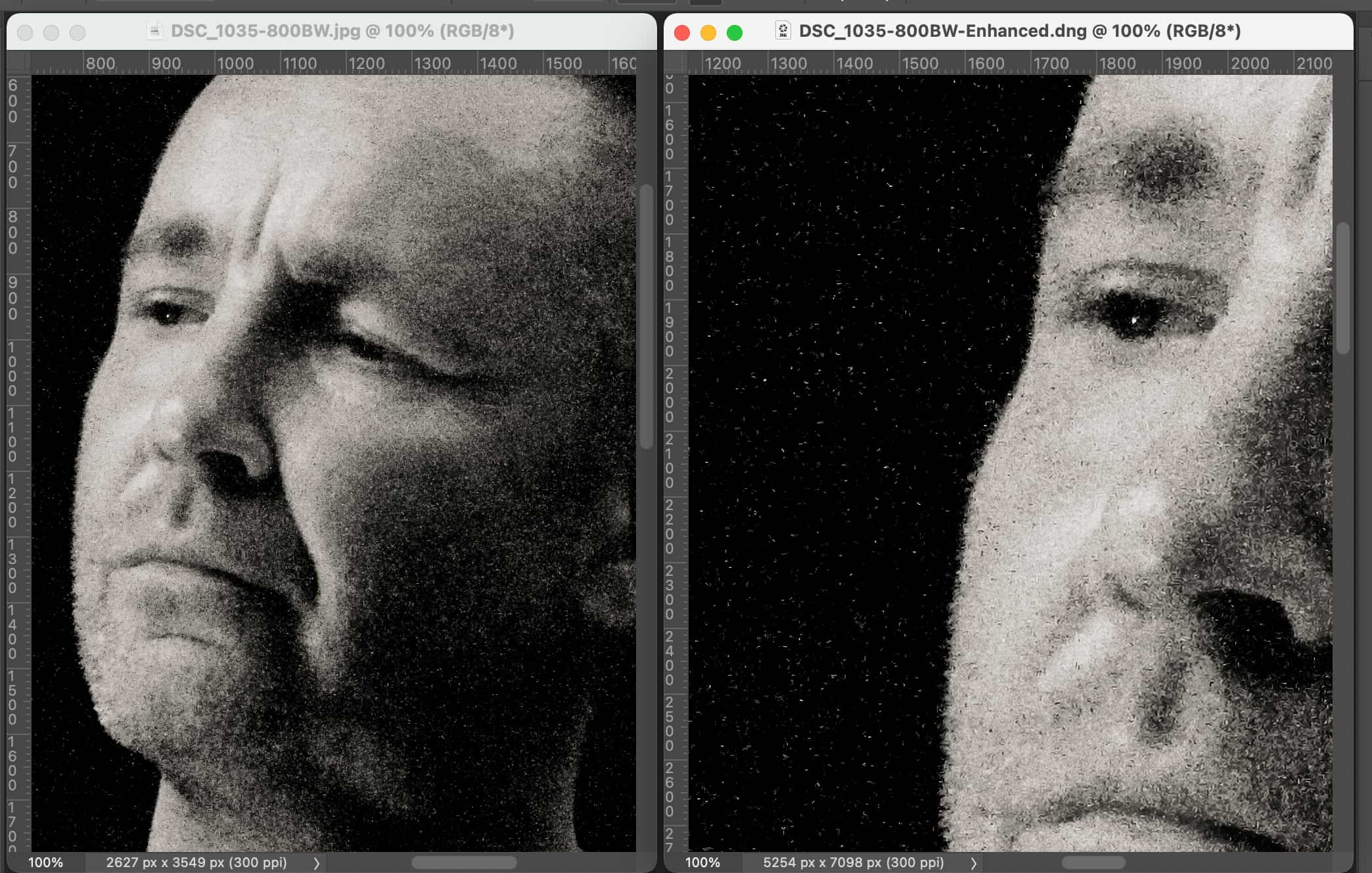 So we try a couple of photos of violinist Nigel Kennedy from a 12 megapixel Nikon DSLR back in the day, which in turn pushed it up to a 48 megapixel image.

Again, there’s no extra detail added, but it’s basically a bigger version of what we’ve seen. It’s staggering, and might just be a way to get more image quality out of a smaller shot.

Finally, we tried it with one more shot: a 24 megapixel image of the Moon, which upscaled it to a staggering 96 megapixels. Yikes.

What are the limitations?

Adobe’s Super Resolution could well be a way to get more get those old images upscaled to an even bigger and even better resolution, but because it’s not going to add extra detail, the limitation is that it won’t necessarily make your images look better, just bigger overall.

That’s fine if you’re keen to supersize an image from an old phone or camera, and means even images as low as 2 megapixels can upscale to something bigger, which is great.

Just don’t expect them to suddenly get clearer, as Adobe’s Enhance won’t clear up images, only increasing the size accordingly.

It’s still very impressive all the same, and may mean big prints are suddenly more possible from smaller images, as well as better crops because you can make the original larger and cut out the part of the image you want most. 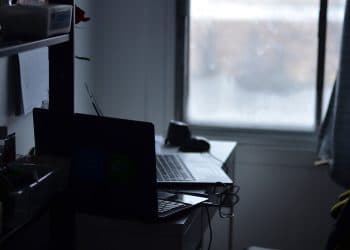