The next type of cooking you do on your stove could be one that does some of the cooking for you, and doesn’t need you to be in front of it. And better yet, an Australian brand made it happen.

We’re always into local stories, and when those local Australian stories have the chance to change the world, even better. That might be the case with a company launching something unusual in the smart home world, because while there’s a lot happening in the home — from smart doorbells to smart curtains even to lightbulbs and so on– Australia’s Zega is very different.

Rather than offer something to install and make your home smarter, Zega’s approach is to let you use something in the kitchen that makes your cooking experience smarter, and more connected.

This week, the Australian company has launched a digital pot for your stove, and if that sounds a little crazy, just hold on, because it’s not an entirely digital crockpot of sorts, but uses some digital technology to deliver a smart style of cooking. The concept is to have “Intelligent Cookware”, so to speak, but the idea is actually a two prong approach: double-wall cookware that works with a connected digital thermometer. By themselves, they’re independent gadgets, but marry them together, and the pot and thermometer are able to cook your food, and tell you over your phone (and on the lid) whether your food is cooking or complete, with some of the other steps in between.

In essence, Zega’s Digital cookware is a concept that means you can throw your ingredients in, warm up the stove, wait to see the the pot and its app tell you, turn off the stove, and then walk away, letting the pot do its thing and cook your food.

You’re basically using the power of heat to cook, so it’s not going to stir for you, but if what you’re making is a one-pot kind of thing, you may end up saving in energy by having the stove on for only as much time as you need, with the digital thermometer and smart construction of the pot helping your food get there without excess energy use. Kind of like leaving an electric slow cooker on, except not, meaning you could go and do other things.

“The secret is the double-wall construction that sandwiches a thermodynamic layer of air between two sheets of 18-10 stainless steel,” said Brendan Dunne, Lead Designer and Co-Founder at Zega.

“This traps heat and moisture inside the pot like a thermos, so you heat it for just minutes and it cooks for hours, off the stove, with no stirring or tending required. And because it continues to cook without gas or electricity, it saves money, it’s better for the environment, and it’s perfectly safe to leave unattended,” he said. “Additionally, the delicate, self-cooking process locks in more flavour and nutrients, creating healthier, tastier meals.” 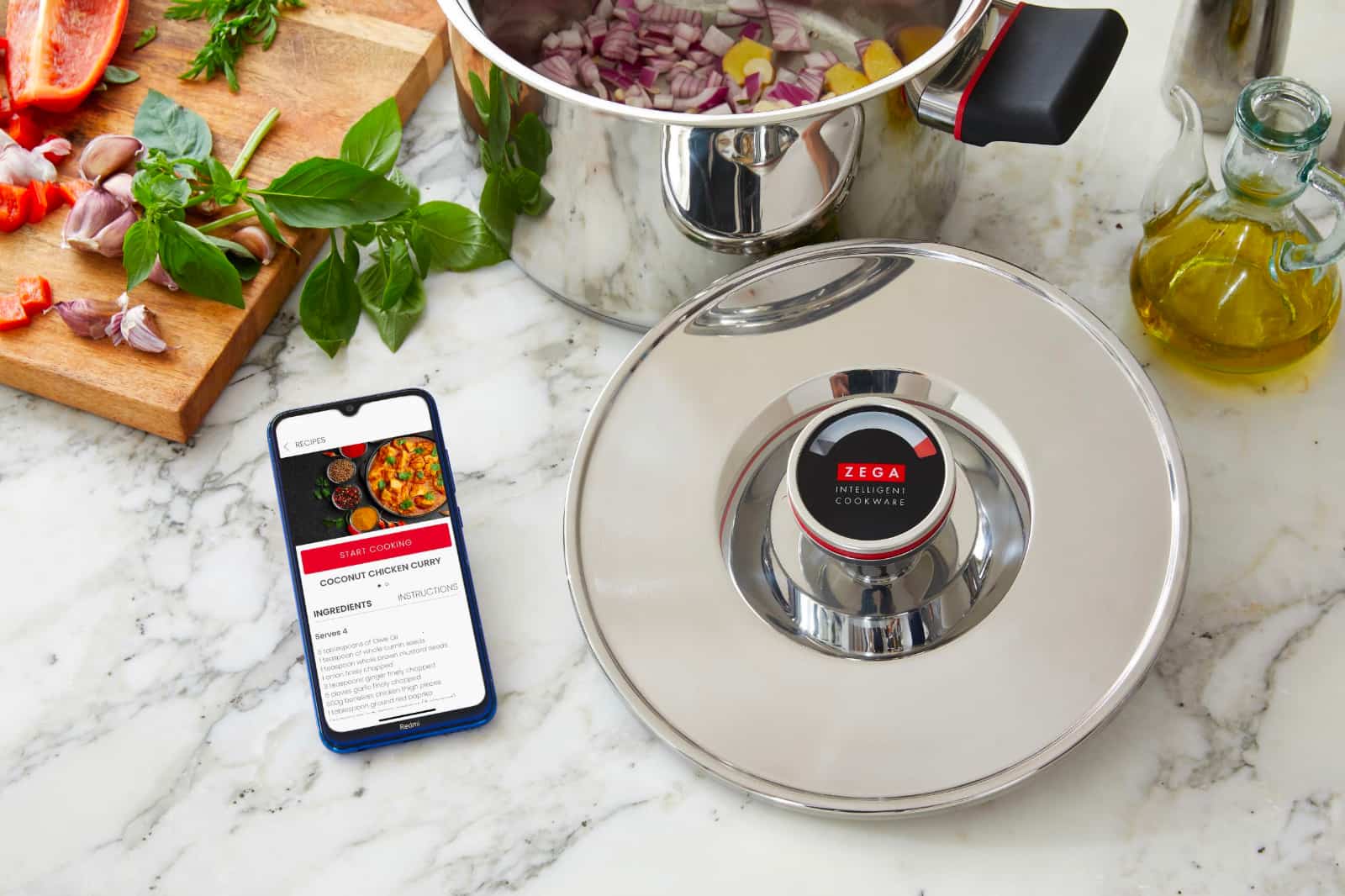 There are two variations of Zega’s Intelligent Cookware, with an analogue variant that uses the same port but includes a thermometer needle instead of the digital approach — heat it up, and when the needle reaches the red zone, turn the stove off — and the more tech savvy digital equivalent, which not only has the app connectivity, but also light up instructions on the top of the lid, giving you an idea of how things are going.

“We know that one of the biggest barriers to creating healthy and nutritious home-cooked meals is a lack of time, so we wanted to design stylish, high-quality cookware that takes care of the cooking for you,” said Dunne.

“Zega’s unique design and SmartControl technology means you can simply pop in the ingredients and walk away – leave the house, pick up the kids from school, whatever you need to do – and come home to a healthy, home cooked meal.”

While we’re not sure if everyone will just walk away from a cooking pot, if there’s no heat under the pot and the stove is off, the risk is likely reduced for something necessarily crazy to happen. That might make the whole thing just that much more interesting, and means that instead of leaving the stove on, you can use the power of heat to cook your food, and even get a gauge of how it’s going from your phone. It doesn’t appear to transmit while you’re out and about, mind you, as the range of Bluetooth isn’t quite that long, but the design of the pot means your food can keep cooking, even if the stove isn’t powered on.

Zega’s Intelligent Cookware is available now in Australia, priced at $249 for the analogue equivalent without an app, or $299 for the model with Bluetooth and an app.