Samsung’s 2020 soundbars focus on your sense of space

It’s not just new TVs that are on the way out, as the speakers that typically sit under them see some changes, too.

Everyone has different needs, but if one of your needs has been to get your home theatre’s sound in order, perhaps alongside a new home theatre screen, it may well be your time.

With April and May typically being the year’s TV changeover time — when new models arrive and old ones go on sale — it’s of little surprise that speakers designed to work with those TVs are coming out around the same time, which is exactly what’s happening.

Specifically, Samsung’s new QLED and LED-backlit 4K and 8K TVs will be accompanied by three ranges of soundbars, with a premium “Q” series for that QLED range, an “S” series which looks at design, and a more standard soundbar variety in the “T” series.

For Samsung, it means soundbars will be made available across a variety of price points, ranging from $349 to $999, and different features depending on what you might be after.

If it’s a soundbar that delivers surround sound with a degree of virtualised 360 degree sound, Samsung’s T-series appears to be that, with a fairly straightforward black rectangular box for the soundbar and a subwoofer along the side. It’s about the most standard approach to design you can find for a soundbar, and will range from $349 to $599 in Australia.

Next up is the S-series, which is hardly a series at the moment, and more just one soundbar. Launched as the S61T, it’s a $599 white soundbar with softened edges complete with side-firing speakers built handles height, thanks in part to a technology Samsung calls “Acoustic Beam”. 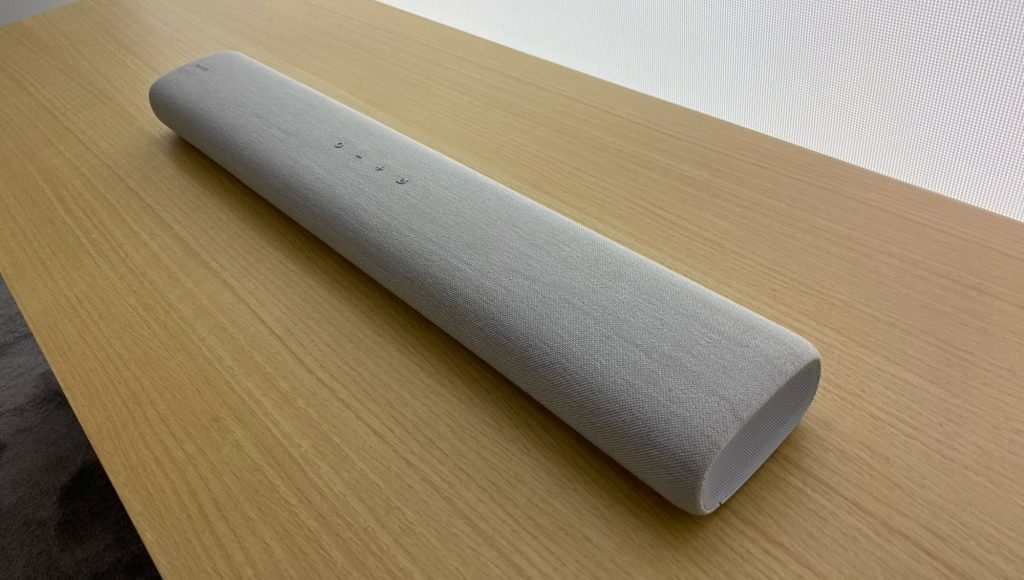 Samsung’s Acoustic Beam concept is one that follows the approach of Dolby Atmos and other 3D sound systems, firing sound upwards, but not through dedicated speaker ports, and instead through holes designed to spread sound up and out. It’s not exactly the same as Dolby Atmos, but many deliver a virtual bubble of audio that encases the listener, or in this case, the viewer, given that it’s designed for use with a TV in a soundbar.

And it’s joined by the Samsung Q-series soundbars, three models made to work with the QLED TVs, but could work with any TV. Starting at $799, the Q60T, Q70T, and Q800T can sit in the spaces left by the stands of their respective TV models launched this year, and arrive with the same approach to 3D audio in Acoustic Beam, but bundles it with Dolby Atmos support alongside.

However there’s also another feature that could make TV sound interesting, and it’s something Samsung calls “Q-Symphony”.

Specific to Samsung TVs, Q-Symphony effectively turns a Samsung TV into another channel for the soundbar to use, complete with audio positioning.

It means that while the TV speaks typically stay off when a soundbar is plugged in, a combination of a Samsung TV and Samsung Q-series soundbar could be an interesting choice for getting a wider breadth of sound in your living room, employing not just the soundbar to get a wide and punch surround sound, but the TV to deliver positional audio based on what’s happening on screen at the time.

As unique a technology as it’s is, Samsung’s Q-Symphony does come with the catch of needing a Samsung TV to work. While a Samsung soundbar should work with any TV, this concept requires a Samsung TV to make the connection, though when asked if older TVs would work, a representative for Samsung told Pickr that “the new soundbars work on the older models”.

We’re not quite sure of the extent of that, however, as the Q-Symphony technology may require a little more support from the TV, and possibly a firmware update, as well. We’re checking with Samsung, though, to find out just how far back Q-Symphony’s TV synchronised sound will work, as it could be an interesting upgrade choice, particularly if you have a model that’s a year or two old and are looking to boost audio considerably.

“The Q Series, T Series and S Series ranges are an incredible extension of our commitment to delivering a stunning range of soundbars that will offer Australians the ultimate in Samsung design, innovation and audio,” he said.

Samsung’s 2020 line of soundbars is set to arrive in stores shortly.