Ecovacs connects IoT, robots to do your cleaning

Robot vacuum cleaners aren’t necessarily anything new, but one you can talk to that will clean your floor and then mop it? And how about a window cleaner? The robotic janitorial reality is here.

CES was known for quite a few things, and while robotic dogs was one of the things, robotic cleaners was another. At least one company revealed as much, even going so far as to connect Google’s Assistant service to the technology, effectively allowing you to control a robot cleaner with your voice.

Ecovacs may not be a name you’re familiar with, but its robotic cleaners are available in Australia, with the company developing robotic vacuum cleaners that are just a little bit different from the sort we’ve seen from Roomba, Samsung, and any other company who happens to spend their time developing flat discs that scan the floor for dust and either sweep it to the side or suck it up into a small tank.

In fact, Ecovacs revealed two robot cleaners that could start helping out around the house, one of which you can talk to and command, while the other was more about getting those hard to reach places.

The first was the Ecovacs Deebot Ozmo 930, a real mouthful of a name that looked like another circular flat robotic vacuum cleaner your cat would probably have a good time sitting on, but does a little more than feline transport around the home.

Rather, it not only scans the home using laser analysis, but also can sweep and suck, and then mop, providing a proper deep clean so that the floor is actually clean, not just presumed that way.

Working by itself, the robot will also come back to base when it needs to, and can make it way around cleaning on whichever surface it comes across, wood, ceramic, or carpet, while connecting to the Google Assistant service to be controlled from a Google command either at home or remotely.

But as interesting as the Deebot Ozmo 930 was, it wasn’t as cool as the real Spider-Man of Ecovacs’ CES 2018 lineup.

A little bit different, the company revealed a wireless window cleaner that would not only hold itself to your windows, but could map particularly large ones and clean windows both on the inside and the outside.

Using a combination of vacuum technology, a cleaning mop with a squeegee, algorithms, and a corded tether, Ecovacs’ Winbot X was easily one of the highlights of the show, revealing a robot that could handle the cleaning of windows so you wouldn’t have to.

The process was fairly simple, too, with a tethering mechanism suspended to the window either from the inside or the outside, and the Ecovacs Winbot X using this tether — which was surprisingly long — to map the edges of the window both vertically and horizontally before going to work cleaning the window.

While the Ecovacs Winbot X was not a Google-connected gadget like its Deebot vacuum sibling, setting up the Winbot X required a little more help, because a window would take between five and ten minutes to clean (depending on size), and it can’t jump across windows itself, so you need to give it a hand and set it up when you need it.

Still, however, it appeared to be a very solid concept, and ideal for homes that not only get dirty windows quickly, but who have trouble cleaning their windows on either side, inside or out, with this cleaner able to be setup from either side provided you have a comfortable way around them.

If your windows happen to be very tall and high-up, a ladder might be required to set up the Winbot X with its tethered mount, protecting the automated window cleaner from falling to a certain death, which is probably one of the most amazing aspects of the appliance.

Surprisingly (and very unlike CES), Ecovacs’ Australian counterpart Damian Commane told Pickr that the Winbot X would be slated for release in Australia later in the year, while the Deebot Ozmo 930 should already be out. 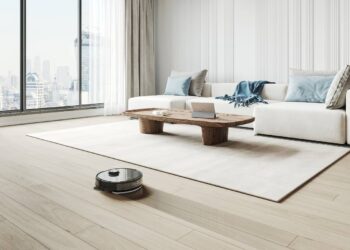