The vision of images you can see and touch that appear out of nothing have always been something stuck in the world of sci-fi, but this technology is closer than you think, and it’s finally coming to Australia.

I’m standing in the middle of a hotel room staring at the sun, getting close and not feeling the heat, able to walk through and hear the fiery flares light up on each side of my head, and yet I’m not. Clearly.

In reality, I’m standing across from Microsoft’s Rocky Heckman, Microsoft’s HoloLens Pursuit Lead for our part of the world, one of the few people in our region that knows Microsoft’s futuristic interface better than anyone else.

He directs me to hold my hand up, to fold my forefinger down and bring it back up again, making a “click” in virtual reality, and finding my way into more of the solar system, exploring Mars, the sun, and yes, even our home of Earth. 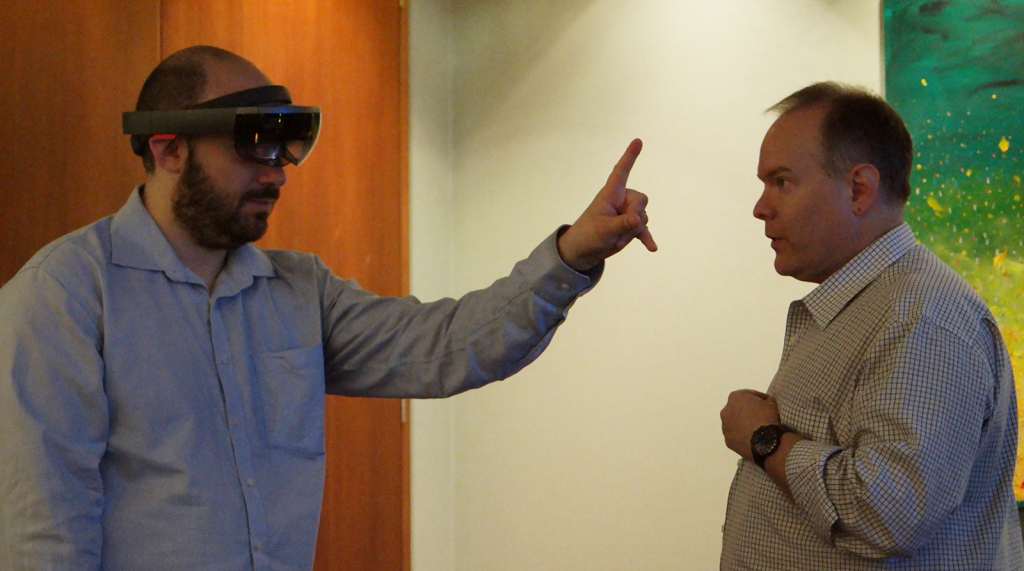 It’s a vision so real that I feel like I’m walking through the space in a topographical view, able to take a wander and educate myself as if I could float, as if I had the power to place the information where I wanted it and look into it, walk around it from all sides, change angles, and even get on my knees and peer up at it from below.

There is nothing quite like this — not in virtual reality or video games — and it’s only just the start.

Rocky tells Pickr about the hardware, filling in the gaps that this is more than just a neat pair of glasses that the editor of the website is wearing with a smile, and it’s not a virtual reality headset either. 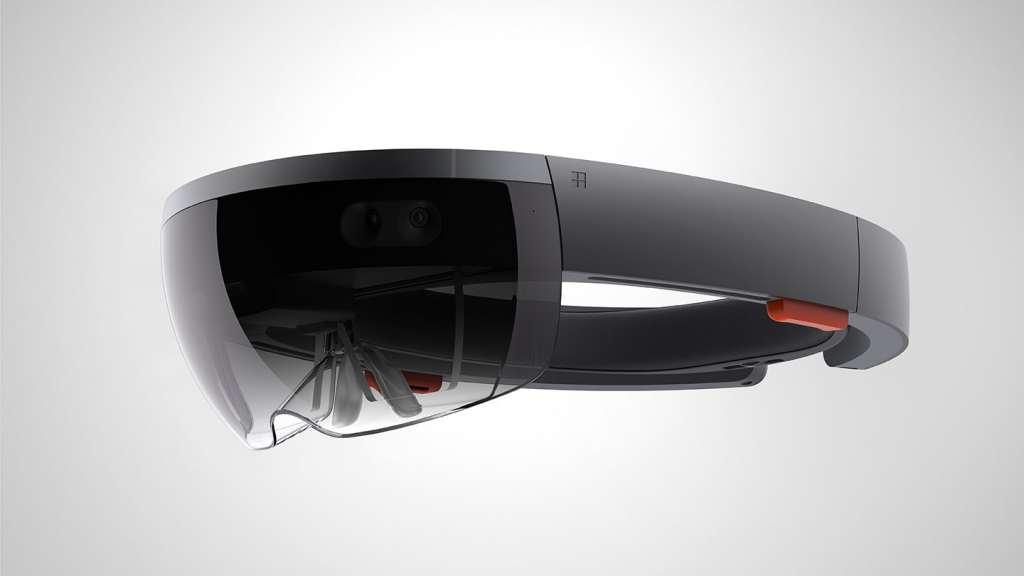 Different from a screen pressed up against your eyes, the Microsoft HoloLens relies on a unique combination of technologies, providing a standalone computer with the power of a laptop in a hardware design similar to a tablet, matching the typical CPU (main processor) and GPU (graphics processor) with new type of processor Microsoft calls the “HPU”.

With the name “HoloLens” given to this product, it’s not hard to work out that the “H” in this three-letter acronym standard for “holographic”, and that’s what the HPU is: a holographic processing unit designed to take information from a variety of sensors found on the headset which will subsequently tell the CPU, GPU, and software what to do.

There’s more to it than those three sections, with transparent holographic lenses used to display the images you’ll see, while other sensors pick up on gestures that will help you touch and move things in the real world instead of the virtual world.

That’s the first lesson you learn with Microsoft’s augmented reality, the mixed reality we now find ourselves in: this isn’t VR in the entertainment space, not like the way Oculus, Samsung, Google, and HTC are pitching it.

No, this is a combination of worlds, as our physical world encroaches on the digital one that VR represents.

You can’t see it in the image, but as I stand opposite Rocky, I see the visual representation of the solar system and I’m excited, and as I accidentally get out of the application and realise that I can set up internet and application tabs in the room around me, and as I look around and see a triangular mesh grid appearing as I glance around, I realise that short of a real holographic projection, this is the future, and it’s hard to turn back.

“When we set out to pioneer the mixed-reality category, we knew that many of the best innovations would be discovered when others got their hands on the technology,” said Alex Kipman, Technical Fellow for Microsoft’s Windows and Devices Group.

“It has been quite inspiring to see what our partners have built and what individual developers have created. Together, we have only scratched the surface for what mixed reality can do. I can’t wait to see what happens next as we welcome these new countries to our holographic landscape.” 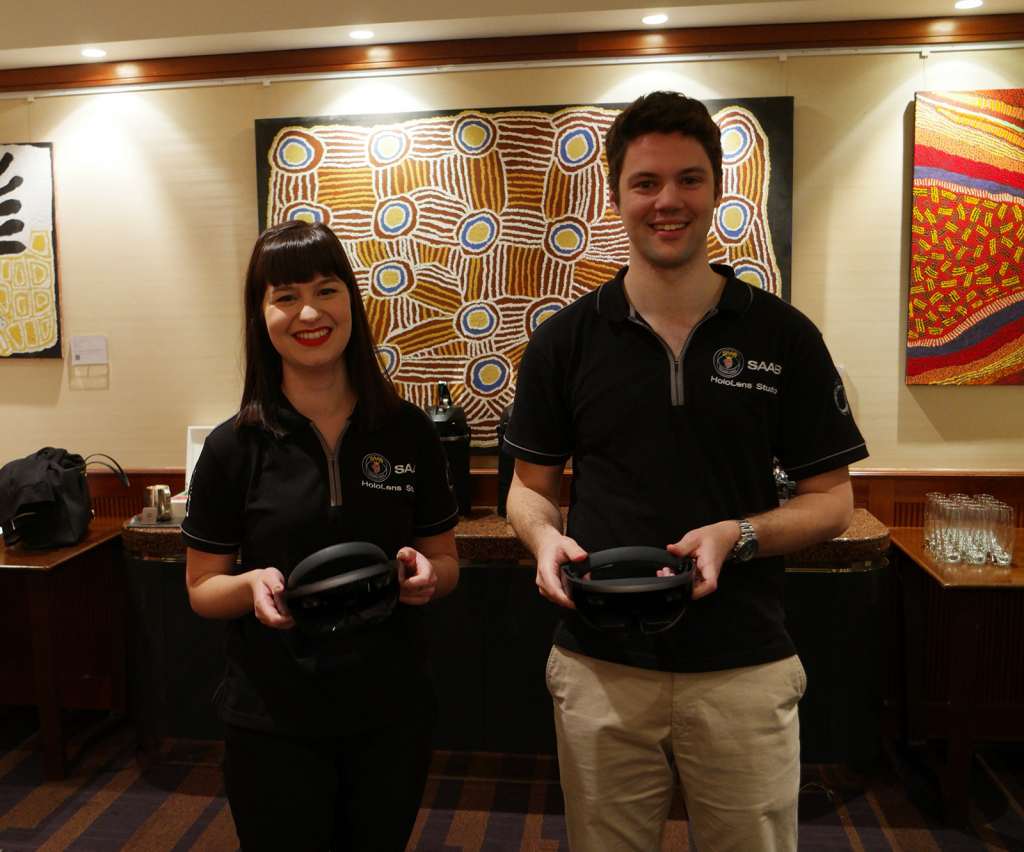 Things get a little more real with a subsequent demo, as the team of Charlie Rocklyn (left) and Will Daniels (right) reveal what Saab Australia is working on, using Microsoft Surface computers to build military training and strategic tracking systems inside Unity, a development environment predominantly used for making video games.

Wearing the headset and being given the demo by Daniels, I’m greeted by a small grid of fictional military activity happening on a table in front of me.

We can see enemy forces engaging on an island, and it’s our job to tell the army, navy, and airforce what to do. 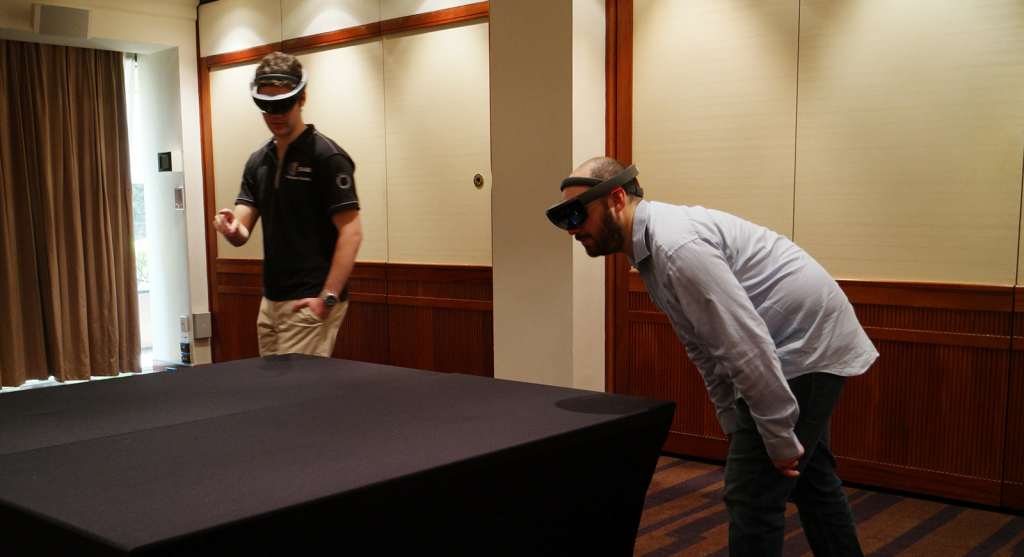 Not being skilled in this area and having our only understanding of military terms defined by video games, we let Daniels control the scene, but the vision is clear: instead of having command teams strategise using laptops, tablets, and print-outs of maps, the teams can evolve to a new way of working, wearing headsets that allow them to not only work from a constantly updating and refreshing scope of the planning and management, but that even gets them to see what the maps look like from the ground, getting close to the action from a base far from the fight.

At that point, we started calling the mode the “Godzilla” mode, because instead of a small map projected on a table, the map overtakes your world, allowing you to see a city, an island all around you, letting you walk up to where your soldiers are and plan their moves accordingly.

It’s like the world’s biggest video game, only this application is no game, built with a real world use: to take military intelligence into the new era.

“Since the launch of Microsoft HoloLens, we have seen really passionate developers and world-class companies develop ground-breaking computing experiences,” said Kipman, adding that these “experiences [are] only possible on HoloLens”. 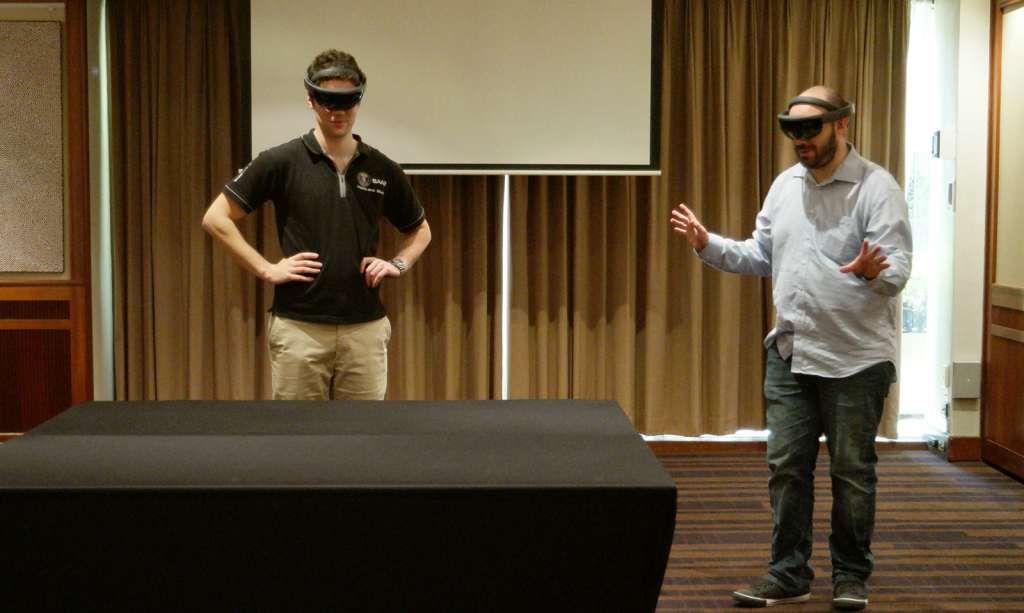 Without doubt, this was easily one of the more exciting experiences this journalist has ever experienced in his nearly ten years of working as a technology writer, and it’s hard to contain the excitement he has for the category.

It’s just that impressive, with aspects really thought about. While the design kind of brings to life a cross between early VR headsets with giant sunglasses, the combination of technologies really works.

And sure, we know it’s not technically holographic, with the lenses showing the information and our eyes doing the math — this is isn’t a projection that everyone can see, but rather a feeling that you own your own holographic world, linked to it only when you don the HoloLens headset — but it still feels amazing.

Between the extra things you don’t think about, like stereo speakers on each side of the headset providing spatial sound to recreate holographic sound elements from each side, or the fact that it can let you navigate with voice and touch easily, or even just how you can work from inside a holographic computer. Forget the screen that everyone can see, because this is Windows from the inside of a headset.

And it is absolutely staggering and genuinely exciting, and we are just so hyped to see what comes next.

For now, Microsoft’s HoloLens will remain one of those things that few people will get to play with, and with a cost of $4369 being the starting price of a development unit headset, it’s quite clear that the HoloLens isn’t ready for the general public.

Rather, this is specifically for people planning to develop for the system, building augmented- and mixed-reality worlds employing Unity and Microsoft’s C# (C Sharp) programming language to build things, exciting things, that can one day be used for more than just commercial and business concepts. 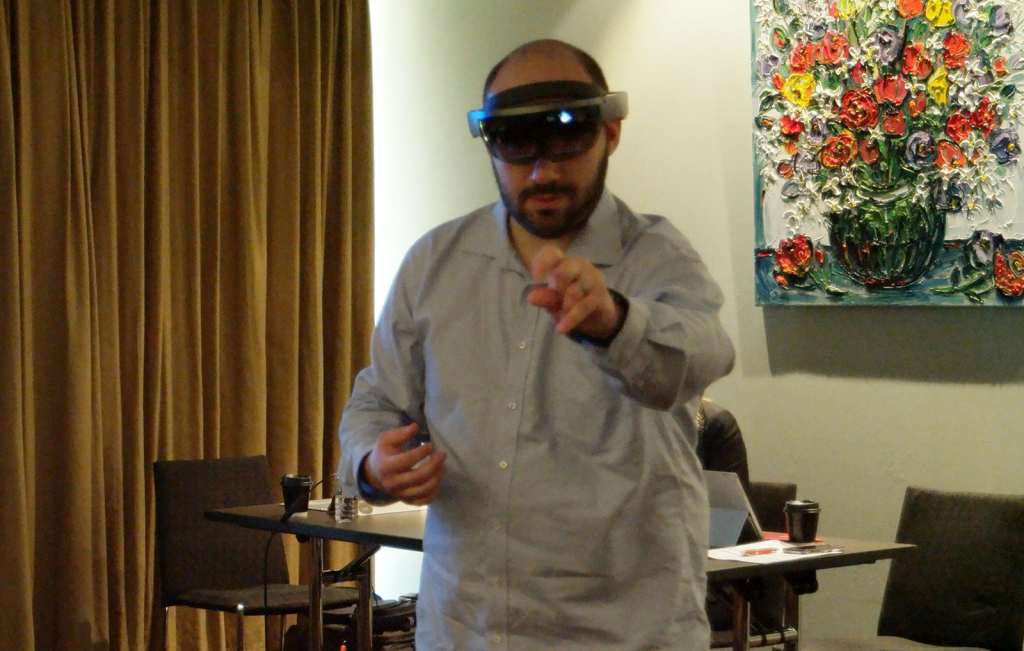 Pre-orders in Australia have gone live this week, and you’ll need that nearly-$5K amount if you want to play, or even a more pricey $7269 for the Commercial Suite, a more expensive variant offering better device management and security, ideal if you plan on developing for a few units instead of one.

We do need to note that pre-ordering now won’t get you a HoloLens tomorrow, with the headsets making landfall in Australia some time in November, but when they do, owners will literally be at the bleeding edge of technology, and after only spending a few minutes with one, we can tell you that we’ll be jealous.